Malmo FF played the second Allsvenskan game after beating Mjällby in the previous game. However, they failed to grab another victory despite scoring first at the Bravida Arena as Joona Toivio equalised for the home team in stoppage time.

In this tactical analysis, we will reveal the tactics of Andreas Alm and Jon Dahl Tomasson that resulted in a draw. In general, Malmö were slightly better in the first half and Hacken improved after the break.

Häcken played in a 4-4-1-1, with Jasse Tuominen playing as the sole forward. He was supported by Daleho Irandust, Ahmed Yasin and Leo Bengtsson. Godswill Ekpolo started as the right-back and made an impact to provide the width.

Tomasson’s only change was using Søren Rieks, the former Ipswich man, to replace Marcus Antonsson because of injury. Again, Guillermo Molins played as the striker and there were no signs of Ola Toivonen and Isaac Kiese Thelin on the bench. It was a 4-2-3-1, same as the last game.

In the first half, Häcken were passive and merely setting a midblock to wait for Malmö’s progression. The shape was a 4-4-1-1 or a 4-4-2, but the two highest players at the centre were seldom pressuring the Malmö backline simultaneously.

The below image was an example of the 4-4-2/4-4-1-1 shape of Häcken’s midblock. Players forming the highest line were distanced from each other, hence, the oppositions easily eliminated the pressure by finding the free player between the lines.

Häcken’s midblock was seldom stretched by the wide full-backs of Malmö, as protecting the centre was always the priority. Also, the oppositions have always moved the ball wide because of the structural setups which we are going to explain.

When the ball went wide, Häcken shifted the defence and forced duels, making good use of the 1 v 1 situations to win the ball from the isolated players. 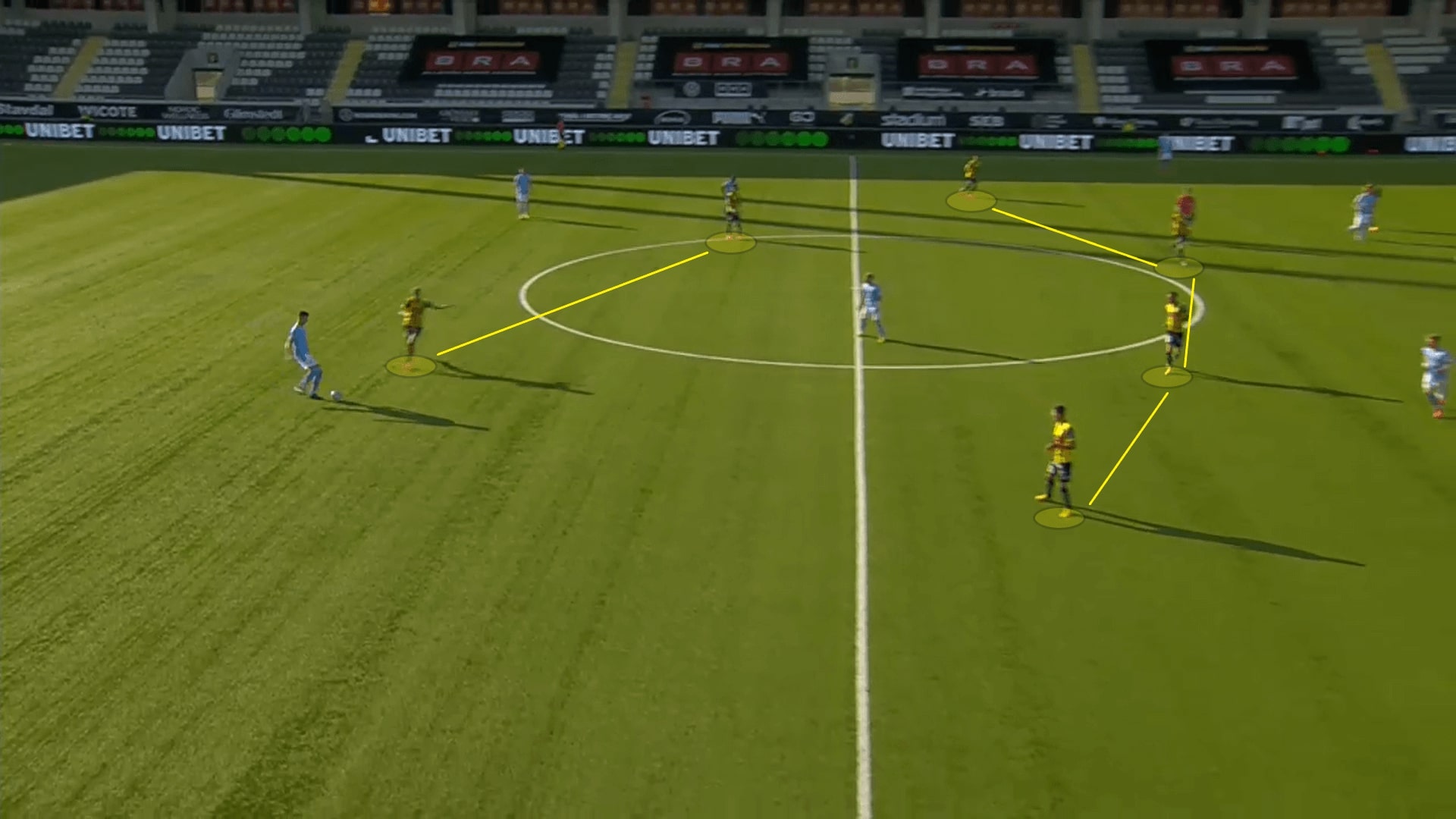 In the second half, Häcken needed a goal and they boosted the intensity of the defence. The frontline was tasked to initiate the press and guide the ball to either side. This was done by a curved run after the centre-back played to his partner, which covered the passer and pressured the receiver. In cases in which the centre-backs spread wide, another player (Erik Friburg here) would support Tuominen by pressing the receiver.

In midfield, numerical equality was reached despite a player leaving his position. It was a zonal approach, but the midfielders should keep Bachirou and Lewicki in an accessible distance if possible.

The far side winger had the freedom to step up a bit as an option in the offensive transitions. It was #20 Ali Youssef here, who left the line and Knudsen was being released as his team regained possession in the press. 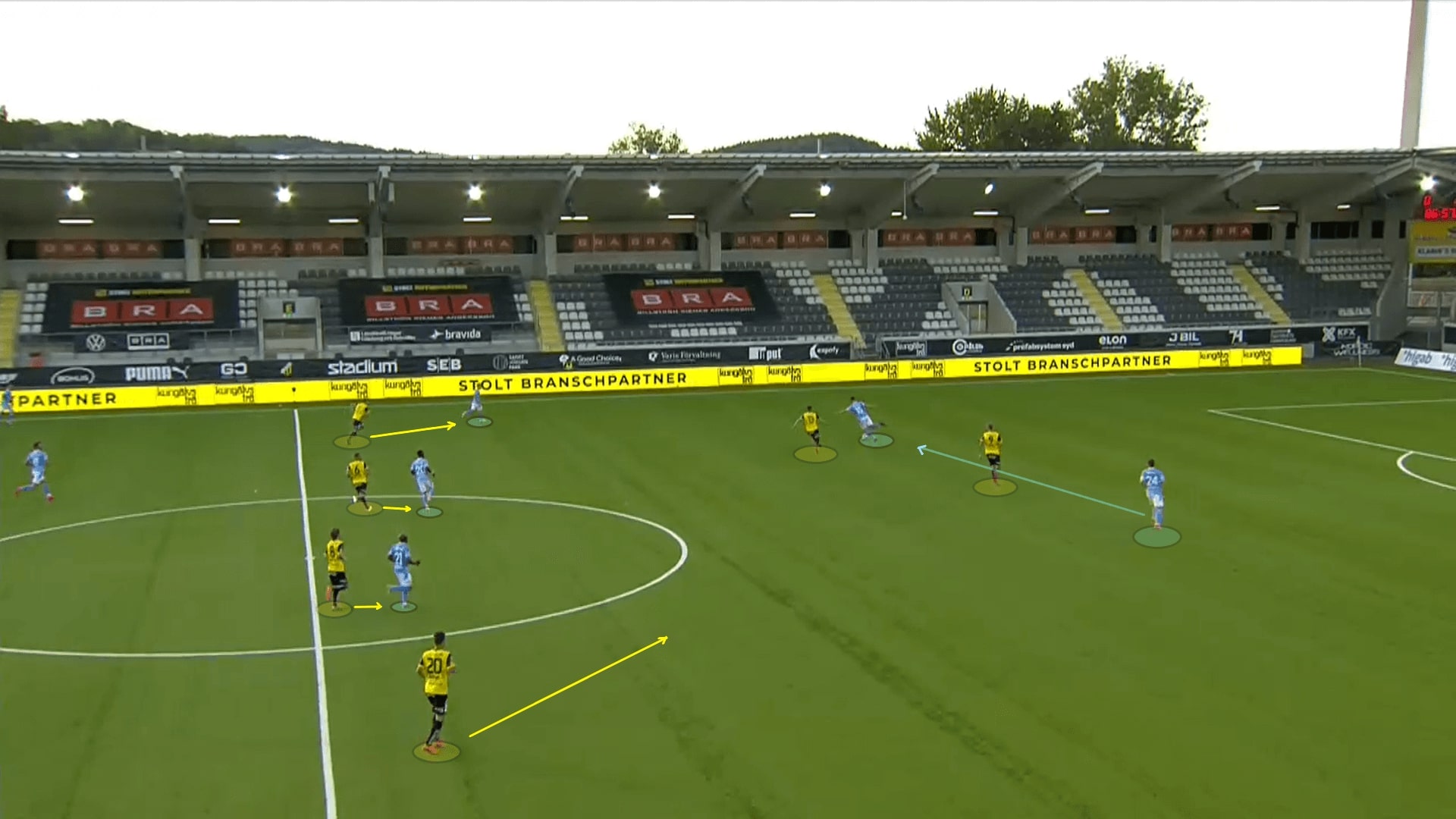 As usual, Malmö had a solid first phase of attack by utilising the numerical superiority and the width of the pitch. Some usual setups: wide full-backs and boxed shape at the centre were used, creating a 2-4 build-up shape.

As mentioned, the pressing of the home team was not compact. Malmö were able to exploit gaps between players to find the midfielders, serving as free men to progress the ball. Fouad Bachirou (from Paris Saint-Germain B team) and Oscar Lewicki positioned themselves in the half-spaces, being the progressive options of the centre-backs.

Both pivots tended to stay behind the Häcken first line, instead of dropping between the centre-backs to prevent absorbing pressure high. Here, Lasse Nielsen passed vertically to Bachirou, who stayed between the lines.

When moving to the advanced areas, the wide full-backs were always the free man, hence, it was very natural to play the ball to flanks. In this case, Bachirou continued to progress play by releasing Jonas Knudsen. 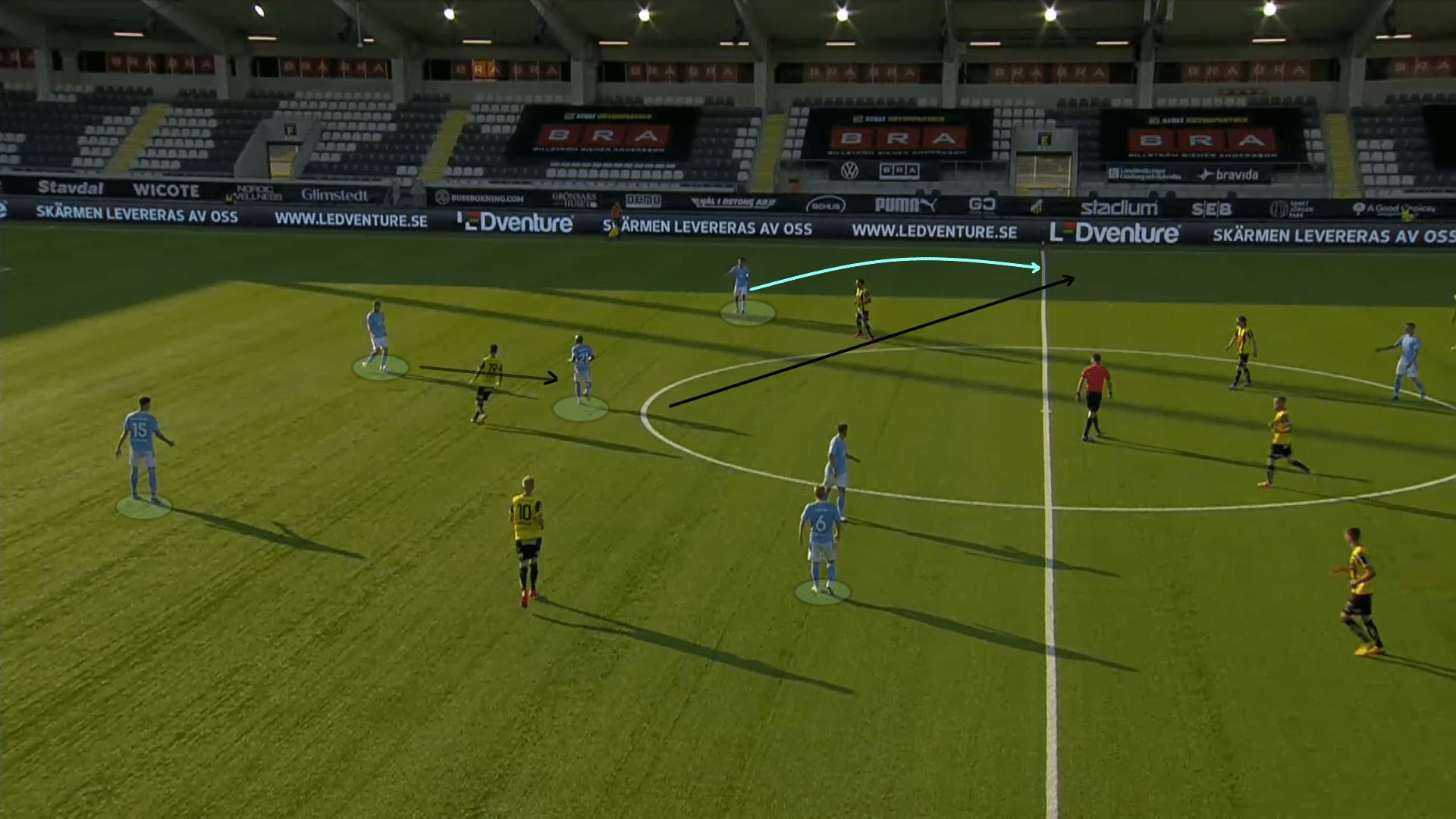 Below is another example. When the centre-backs could play the progressive passes they always looked for the full-backs. In the hopes of creating more spaces in the wide areas, the attacking players such as Molins, Tim Prica and Rieks tended to stay at the centre and around the last line. These behaviours occupied and manipulated the backline, forcing them narrow and ensured the full-backs were receiving the ball without the instant pressure.

Here, we highlighted the positionings of Malmö attacking midfielders and Molins as they stayed close to each other centrally and kept Häcken’s defence narrow. This allowed Eric Larsson to receive the pass from Anel Ahmedhodžić freely on the right flank. Also, it bought Larsson time to progress further by a pass or a deep cross. 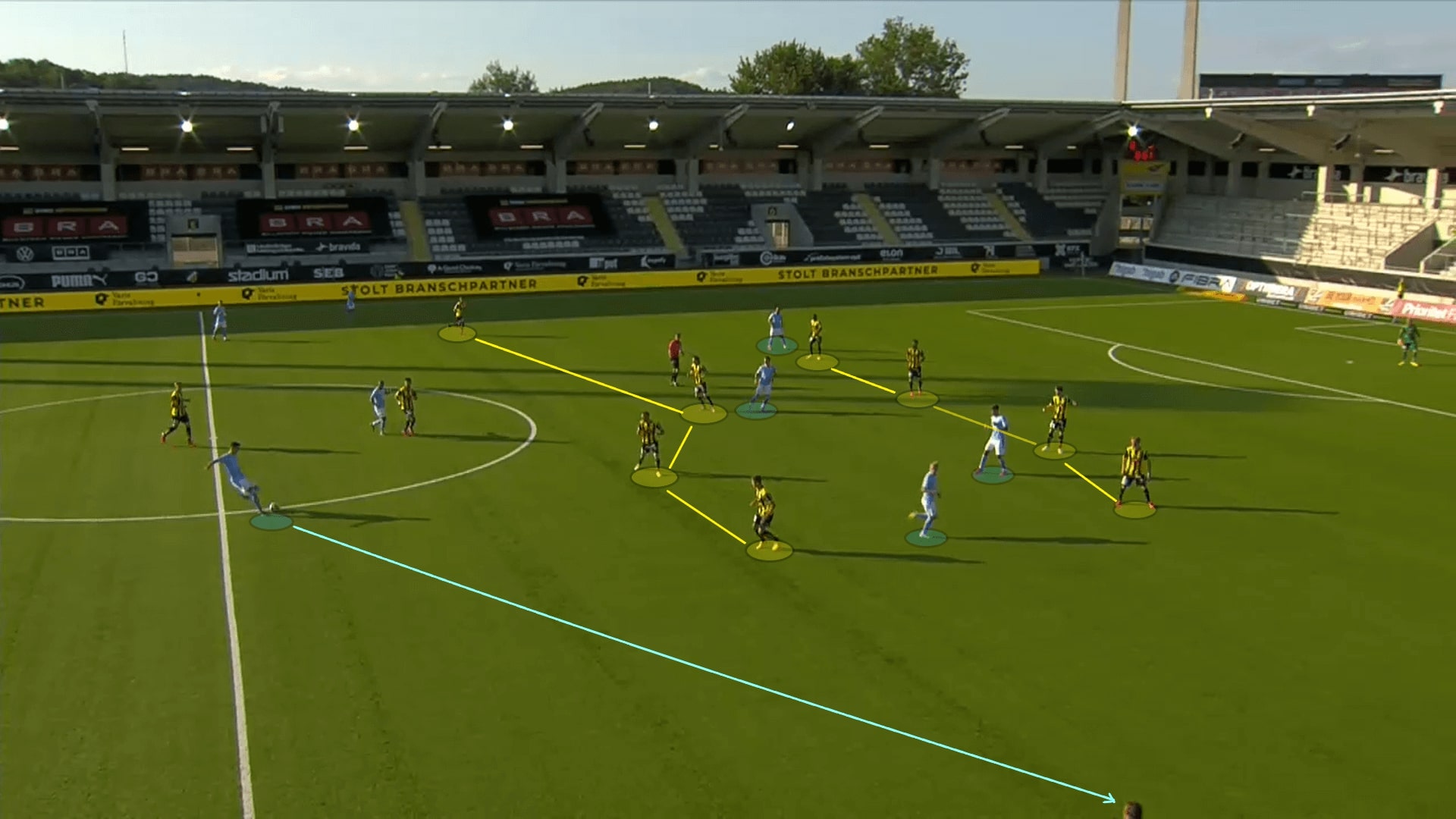 One of the patterns of Malmö to enter the final third would be as following: the wingers making forward supportive runs as a progressive option. Molins often stayed on the ball side to occupy the centre-back, creating a 1 v 1 situation at flank.

However, the left-winger was Rieks in this game, who seldom crossed and possesses limited techniques to exploit the dynamics. Even when such a situation was created, the 33-year-old failed to make something happened. He only registered one unsuccessful cross and one successful dribble out of two attempts after playing 62 minutes.

In this case, Knudsen tried to release Rieks into a 1 v 1 situation, but the Danish winger lost the ground duel when Ekpolo pressured him. 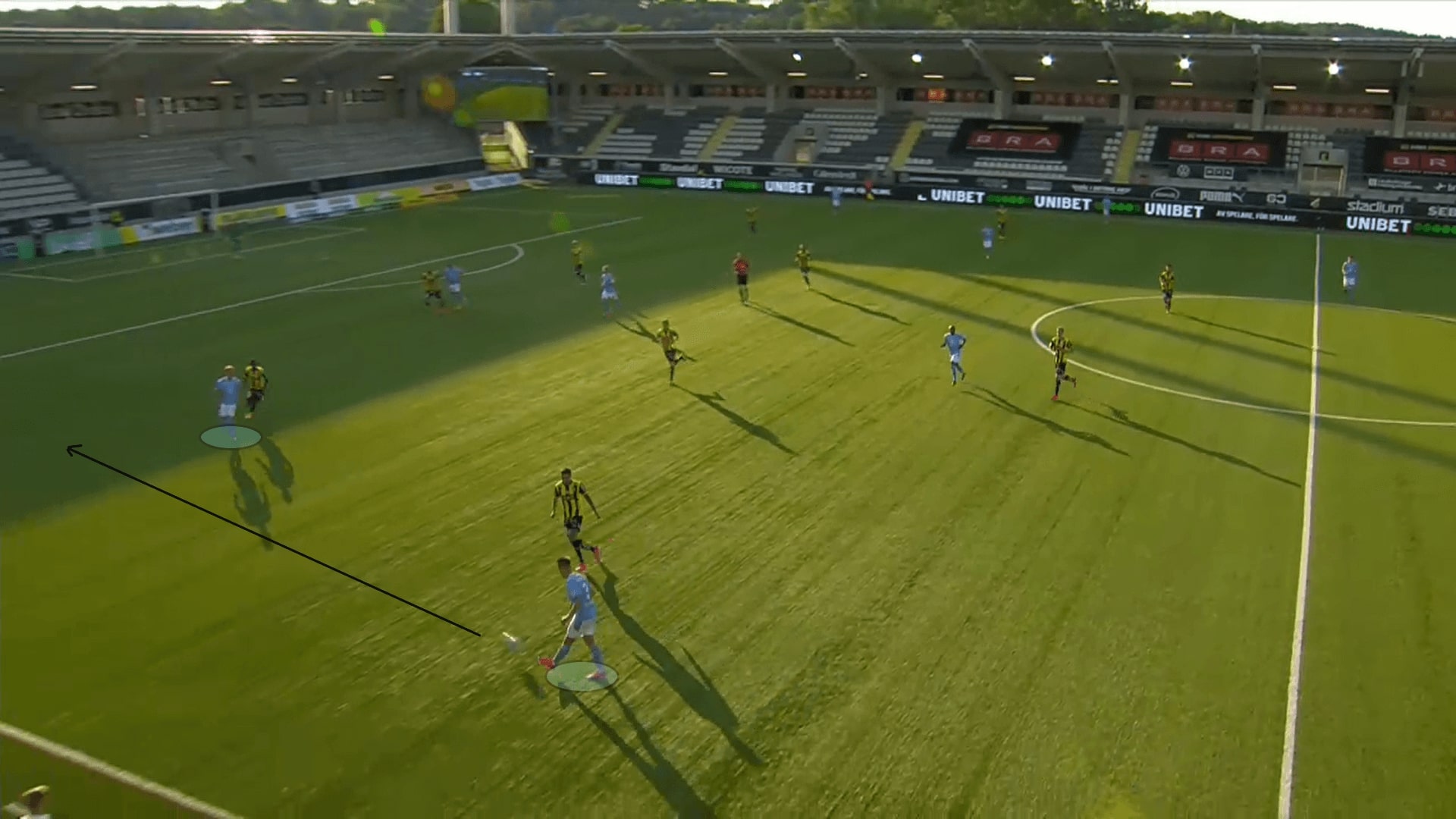 In the second half, Malmö were very poor in the offensive third. Despite reaching the opposition’s half, they let the opponents make the game physical and lost most of the duels. Consequently, only 0.21 xG was recorded after the break.

In the first half, the Malmö duels win rate was 58%, way better than Häcken’s 39%. It was a different story in the second half, as this rate of Malmö dropped drastically to 38%, while the opponent’s increased sharply to 56%.

Below is a graph that summarises the offensive duels of Malmö. We outlined the stark contrast on the right flank, which was a main source of the attacking opportunities. In the first half, Tomasson’s men won roughly half of the offensive duels, but Häcken made the game physical and balanced the situation in this area in the second half.

Another reason for their poor performance in the second 45 were the poor aerial duels results as they lost all battles in the air that occurred in the opposition half. This graph shows most of the  lost duels were in front of the final third, suggesting the disappointing displays in this domain hindered Malmö from entering the offensive third.

In the previous local games under Tomasson, we seldom observed their defensive patterns as opponents such as Karlskrona and Eskilstuna were not threatening through positional play. In the UEFA Europa League, Malmö were the underdog that tried to deny the Bundesliga side Wolfsburg with a midblock. In this game, finally, we have some hints of the defensive approach of Tomasson at the new club.

Malmö maintained a 4-2-4 defensive shape in the first half – pushing Anders Christiansen to form the first line with Molins. The wingers should protect the half-spaces initially, but they kept adjusting the positions corresponding to the opposition’s full-back. The shape can be seen below. 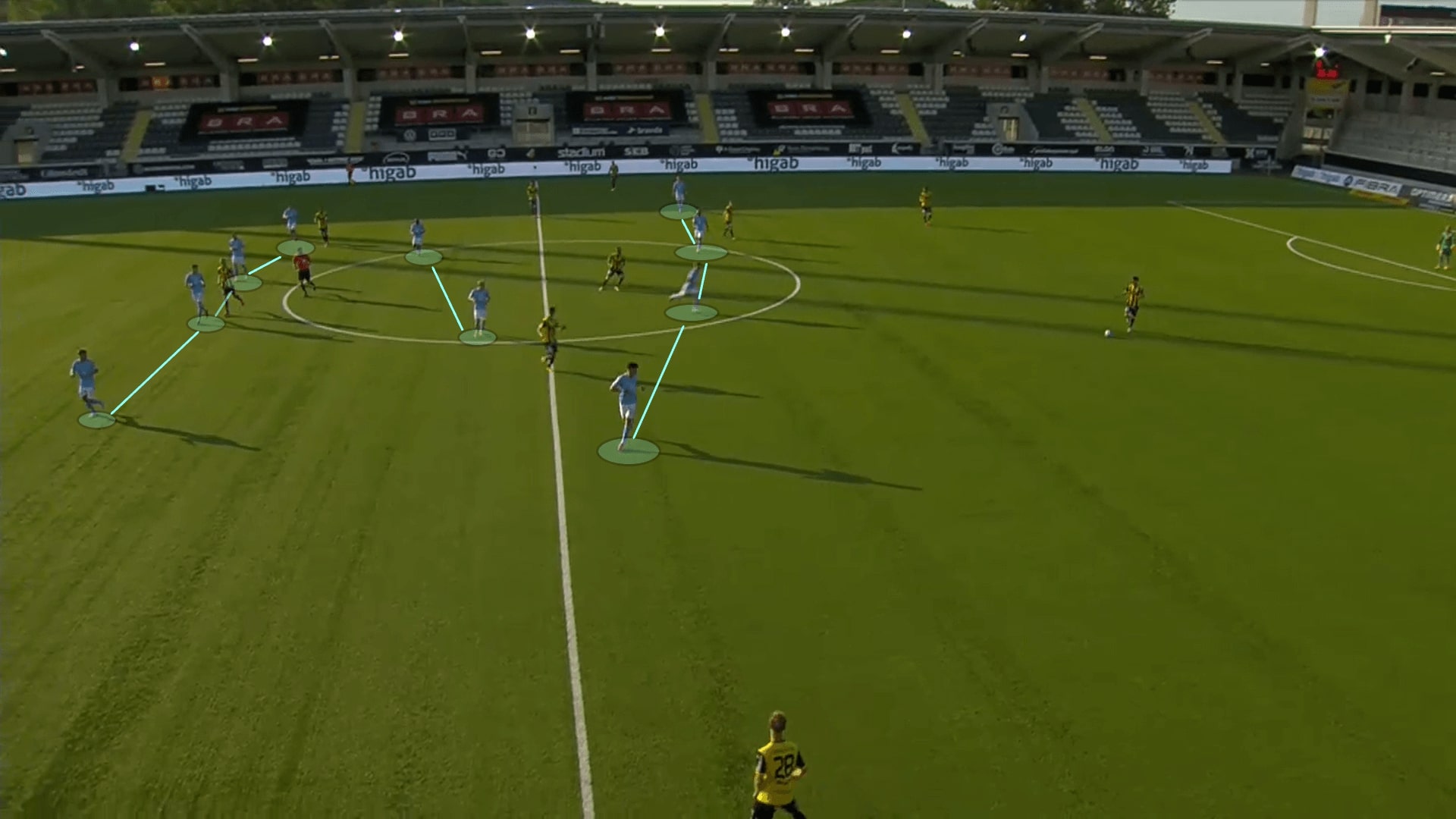 Molins or the midfielder beside him initiated the press in most cases, this maintained the pressure on centre-backs and forced the decisions. Häcken were caught for a few times because of their risky passing to the centre and as a result, were being intercepted.

This is shown in the below losses graph of Häcken. In the first half, they had misplayed some passes and some of them even led to a shot conceded, and a Molins’ goal that only had 0.04 xG.

Similar to the performance in duels, Malmö dropped the intensity hugely after the break, hence, we seldom saw Häcken giving the ball away sloppily. As proven by the stats, 28% of Häcken’s losses occurred in their own third in the first 45, and the number reduced to 17% in the second half.

When the ball was moved to flanks, Malmö tried defending in a man-marking scheme and utilising the midfielders to set a pressing trap. Bachirou was alert to sprint for an interception, recording seven in this game, more than any other player on the pitch.

In this example, Knudsen was marking the winger, Rieks on the right-back and Molins was around the centre-back. It seemed the central option was available, but the pass would instantly trigger the pressure from Bachirou – it was a pressing trap!

However, there were some issues exploited by Häcken when Molins was not initiating the press, which we will explain later in this analysis. 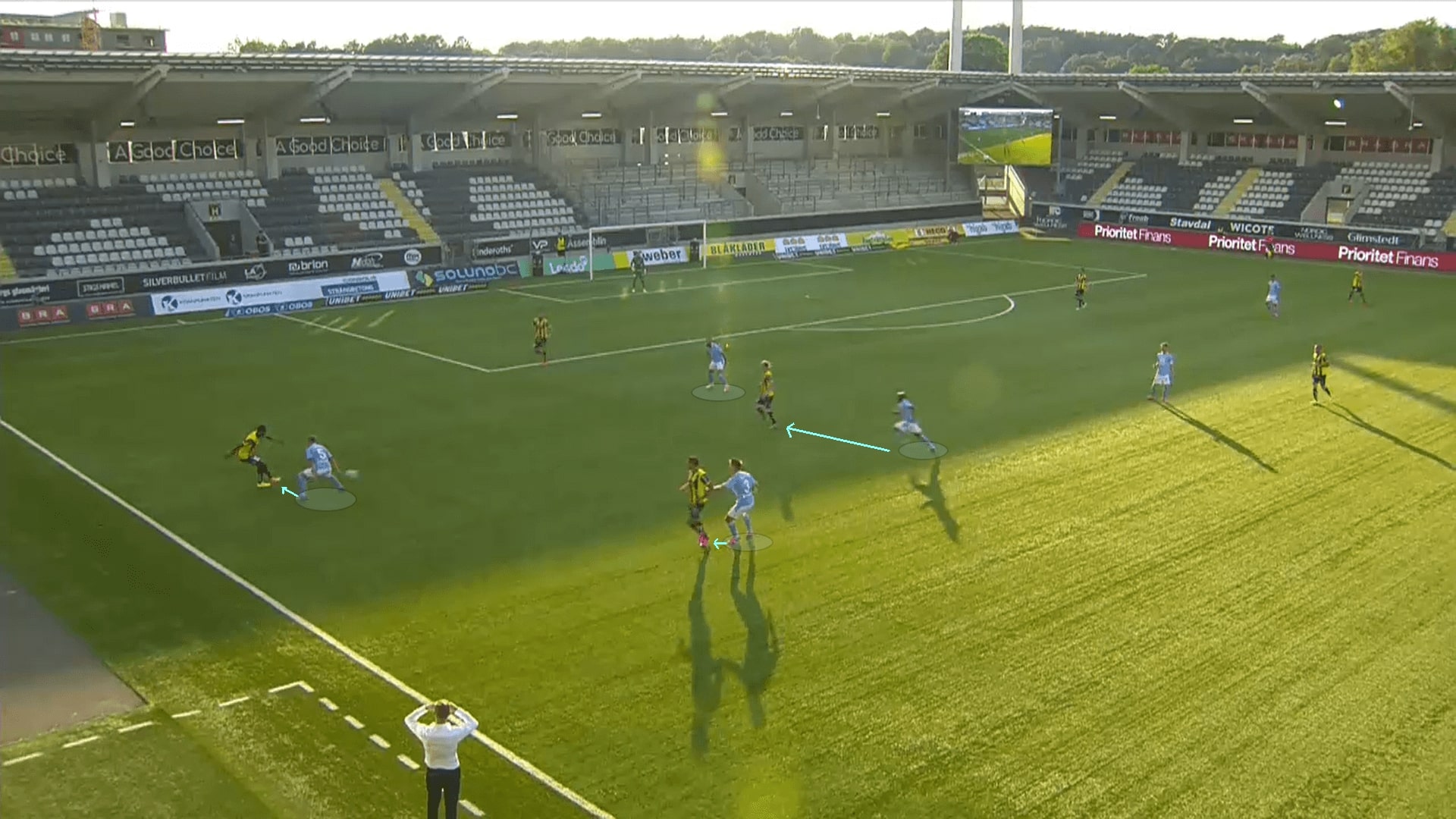 Irandust and Yasin caught the eyes of many in this game, totally contributing to half of the 16 Malmo shots. Both were eager to shoot and Yasin was always exploiting spaces left by Knudsen.

Firstly, we explain how the home team escaped the pressure from Malmö by exploiting the structural issue. When the winger moved inward to press the centre-back, this became an issue as the full-backs were free as an option.

Here, Rieks pressed the centre-backs while Molins provided the defensive cover. However, the man-marking approach collapsed as Knudsen was pinned by Yasin. Consequently, the right-back Ekpolo was unmarked and became the free option. He was easily found by a wall pass, then, carried the ball forward to further progress.

The same issue also happened on the opposite flank at times, where the left-back Adam Andersson was the option to break the press.

Although Malmö were doing okay to fall into a midblock quickly after the press failed, the far side was usually a weak spot. A switch of play could find the free player. This tactic of stretching the defence created the headshot which resulted in an equaliser eventually.

In this example, Malmö were defending on the ball side and committed all players to this half. Häcken were smart enough to play the ball to the widest player on the opposite side often. Here, Andersson was supporting the attack and received the switch of play. 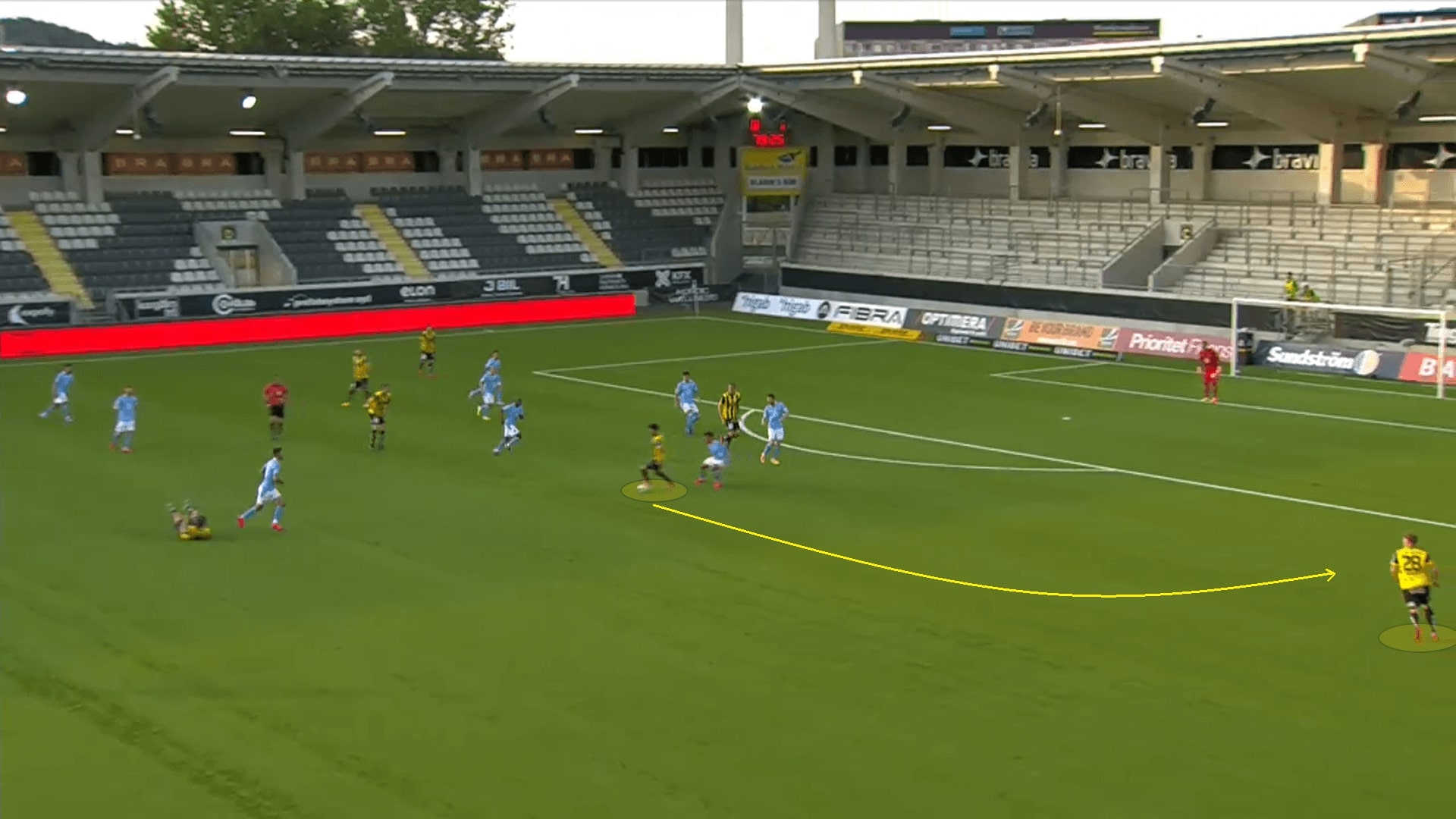 Not the best game from Malmö again, the stark contrast between the halves might be caused by tired legs. They only had a few days of rest from the previous game and maybe Tomasson should rotate the starting XI a bit in the next game.

Häcken did not start well in the first half, but the strong performance after the break helped the team to bag one point, which they deserved. They will have more rest as the next game will be played on Monday night.