Malmo FF failed to claim the Allsvenskan title in 2019, under their new manager Jon Dahl Tomasson (former player of AC Milan and Newcastle United), they will try to be the best in Sweden again. In the first league game in 2020, they faced Mjallby – the Superettan (Sweden’s second tier) champion in the previous year.

Thanks to the double of the former Chievo Verona player Anders Christiansen, Tomasson got his first victory in Allsvenskan. However, the process was not the smoothest as they took 51 minutes to deal with the defensive block of Mjällby.

In this tactical analysis, we will dissect how Tomasson and Marcus Lantz set their tactics against each other.

Malmö played in a 4-2-3-1 formation, as Tomasson has sent a very strong squad out. The 18-year-old youngster, Tim Prica was given a chance to play as a left-winger as his second Allsvenskan game, handed an assist. The new strikers – Ola Toivonen and Isaac Kiese Thelin were not starting, as Guillermo Molins played as the lone striker.

Mjällby got David Bantanero for free but he was not starting. Instead, the midfield was formed by David Löfquist, Jonas Gustavsson and Viktor Gustafson. Besard Sabovic was supporting Mamudo, hence, it was a 3-5-1-1 formation.

The game was controlled by Malmö and they dominated the majority of possession (70.11%). Mjällby were defending with a midblock, hence, having a PPDA of 29.53 in the game. In general, they utilized the structural benefits of a back five and defended with a 3-5-1-1 or 3-5-2 shape.

The main idea was to shut the central access by overloading this zone. Since Malmö had three players at the midfield, Mjällby used the front five to contain the midfield options and forced the ball to the wide areas.

The defence at the wide area was flexible, when the wide midfielder engaged a Malmö midfielder, the wing-back should be on the full-back. This was a scenario we have drawn below – Löfquist moved to press Fouad Bachirou, and Joel Nilsson was on the left-back.

However, when the opposition midfielders stayed deep, these two were defending the winger and the full-backs together. A weak spot of this system was to cope with the switch of plays, as the wide midfielders were not pressuring the full-back enough in these cases. 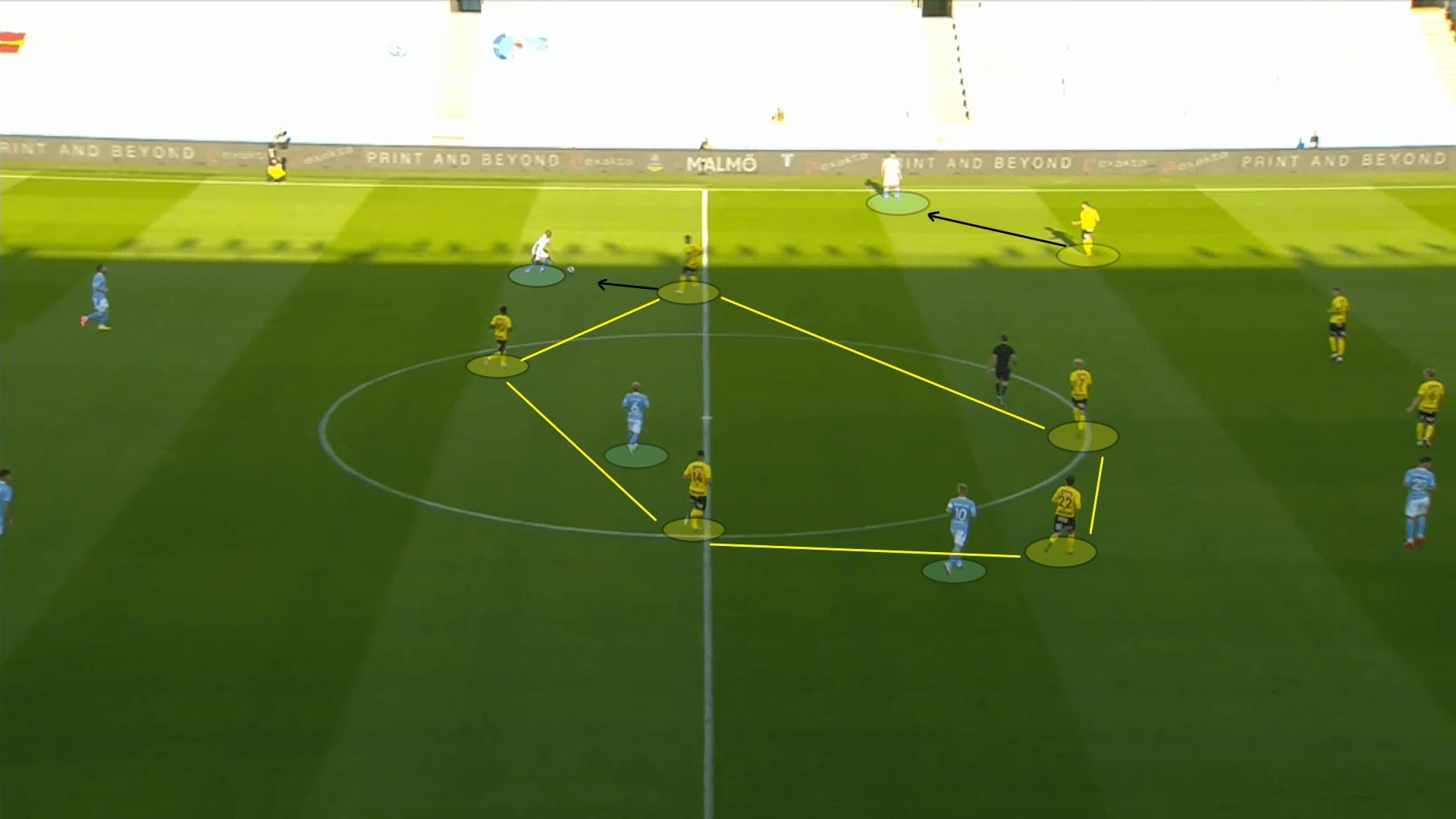 Of course, there were some pressing moments which Mjällby regained possession. A press was usually triggered by a suboptimal body shape of the receiver, which applied to all areas on the pitch. Since Malmö were a bit sloppy, they recovered the ball with this tactic at times.

An example would be the one in this image, where Oscar Lewicki (#6) of Malmö was receiving a pass with his back to the goal. Consequently, he did not know the situation behind him, and Gustafson won the ball with a challenge from his back.

The wing-backs were allowed to push higher for the pressing in the second half, and Nilsson (#9) was the person who supported the press in this case. This added a man to defend in the central third and enhanced the chance to intercept a pass. 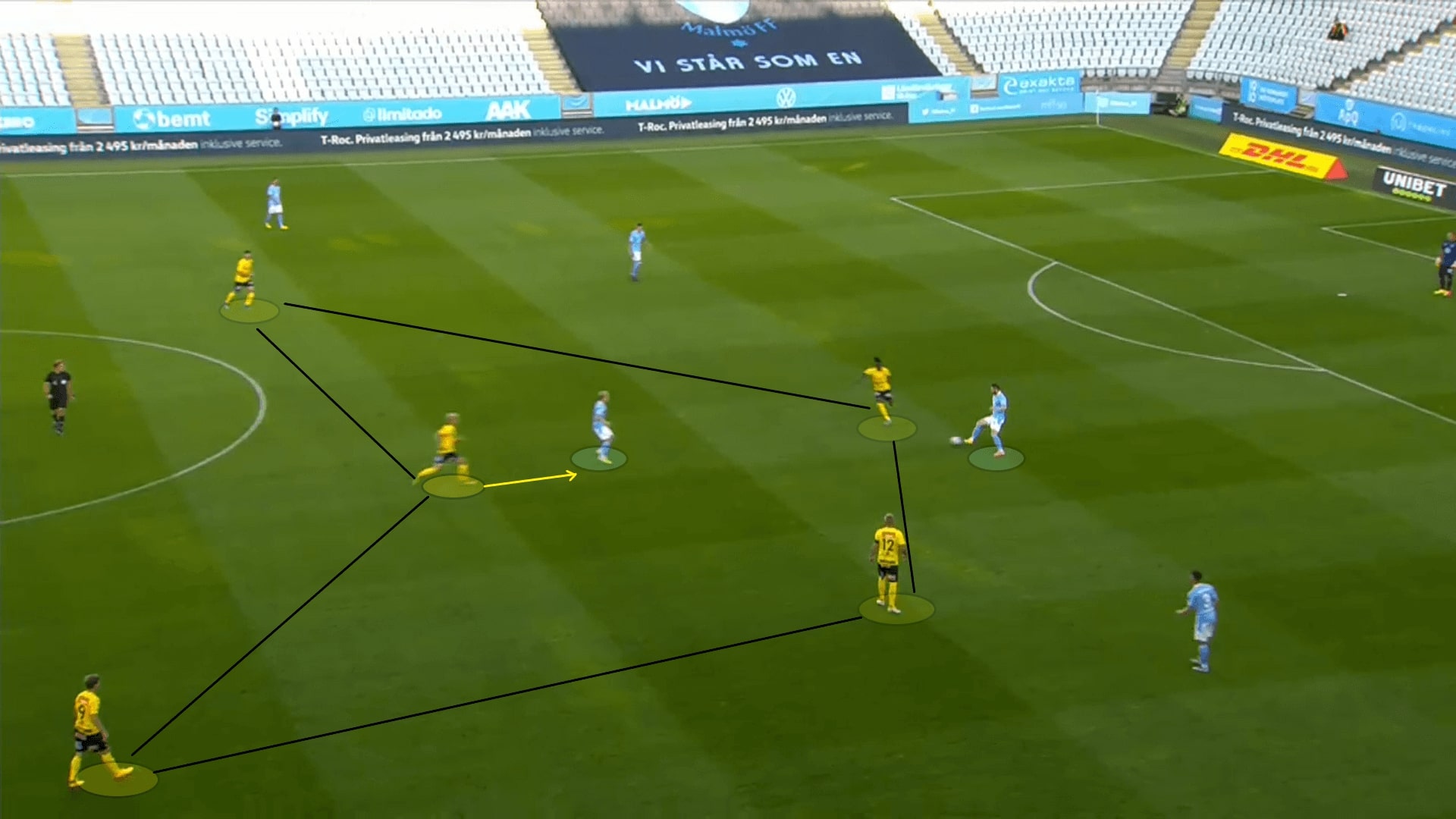 The home team struggled to deal with a midblock at times in the new calendar year already. The story of this match was a bit similar – as explained, the Mjällby midblock always guided the ball wide, Tomasson’s men developed most of their attacks at flanks.

We have drawn the build-up shape of Malmö below, it was a 2-4 in the first phase with the full-backs pushed high and wide. Bachirou and Lewicki operated at the half-spaces to connect plays or make the supporting runs when the ball reached the offensive third. Although this setup seldom stretched the defensive block, the full-backs gained a lot of rooms to initiate an attack. 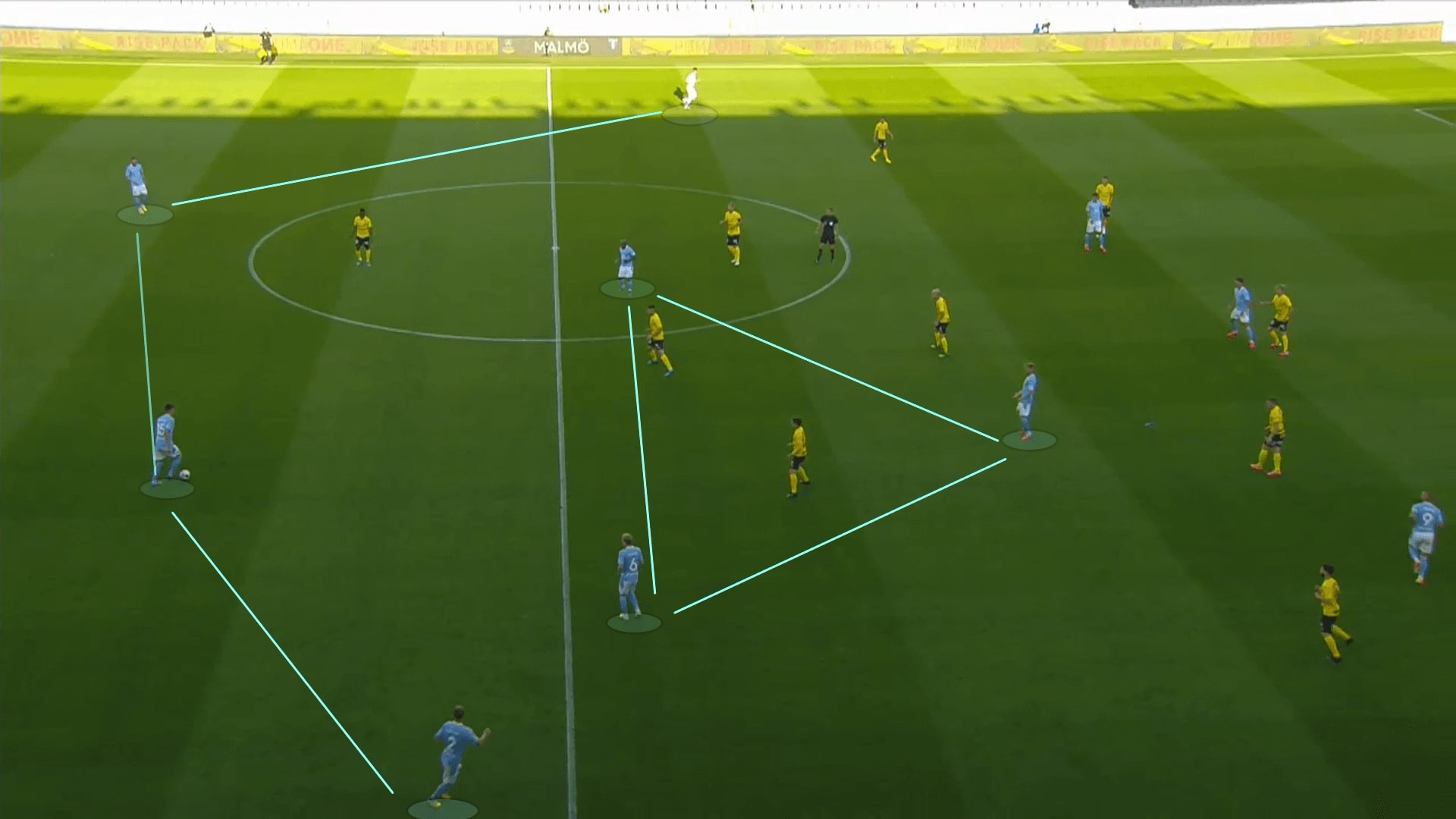 Christiansen has the freedom to roam his position, he was everywhere on the pitch. By coming from a higher position, the No.10 could serve as a progressive option for the centre-backs. Also, he operated behind and around the highest line of Malmö – such flexibility was very difficult for Mjällby to defend.

Below is the heat map of Christiansen. The 30-year-old Danish player was all around the pitch, dropping deep into the central third and involved in the build-up phase. Also, moving to flanks and into the penalty box to create and finish the chances.

In the first half, Malmö had their chances thanks to the reversed movements of the front players. Molin was more than a target man, he was also active to look for the ball and making runs to pull the defenders.

When the Malmö No.9 was making the wide movements or dropping, Marcus Antonsson was the player who always attacks the spaces created. Hence, he had a few chances in the penalty box.

We have an example here: Molin made a wide movement to take away the centre-back, used a lovely backheel pass to find Antonsson who was running into spaces behind. 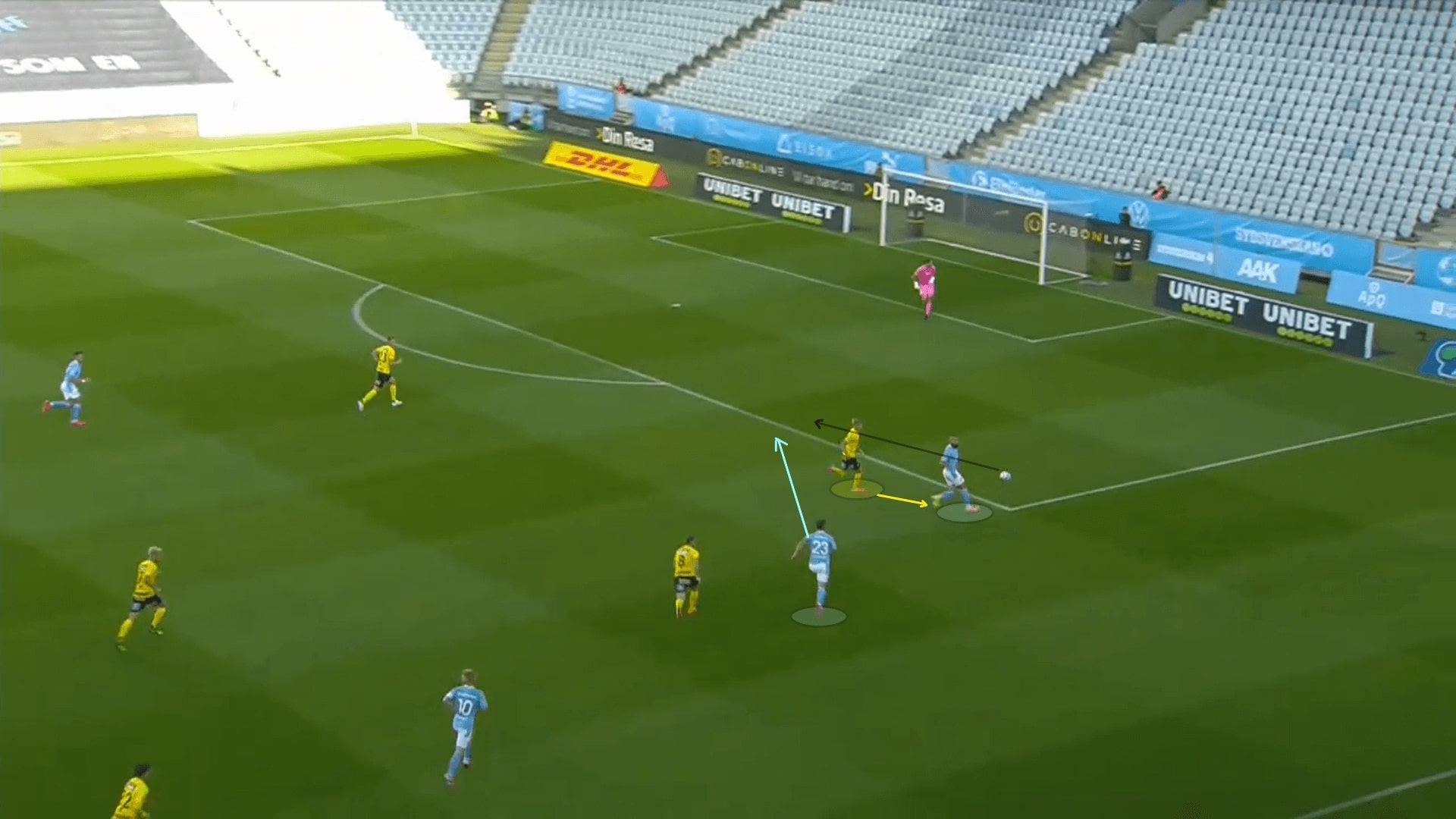 Malmö were crossing a lot in this game, 11 of the 28 attempts were accurate (39.29%), the number more than any Allsvenskan team in this week. We would explain the role of the full-backs as a free man in the next section, they were the main threat out wide.

Combining these elements has led to the opener of Christiansen. Here, Jonas Knudsen played the cross to the skipper, who was unmarked as his irregular positionings as mentioned above. Given the spaces around, Christiansen scored a great goal with 0.1 xG only. 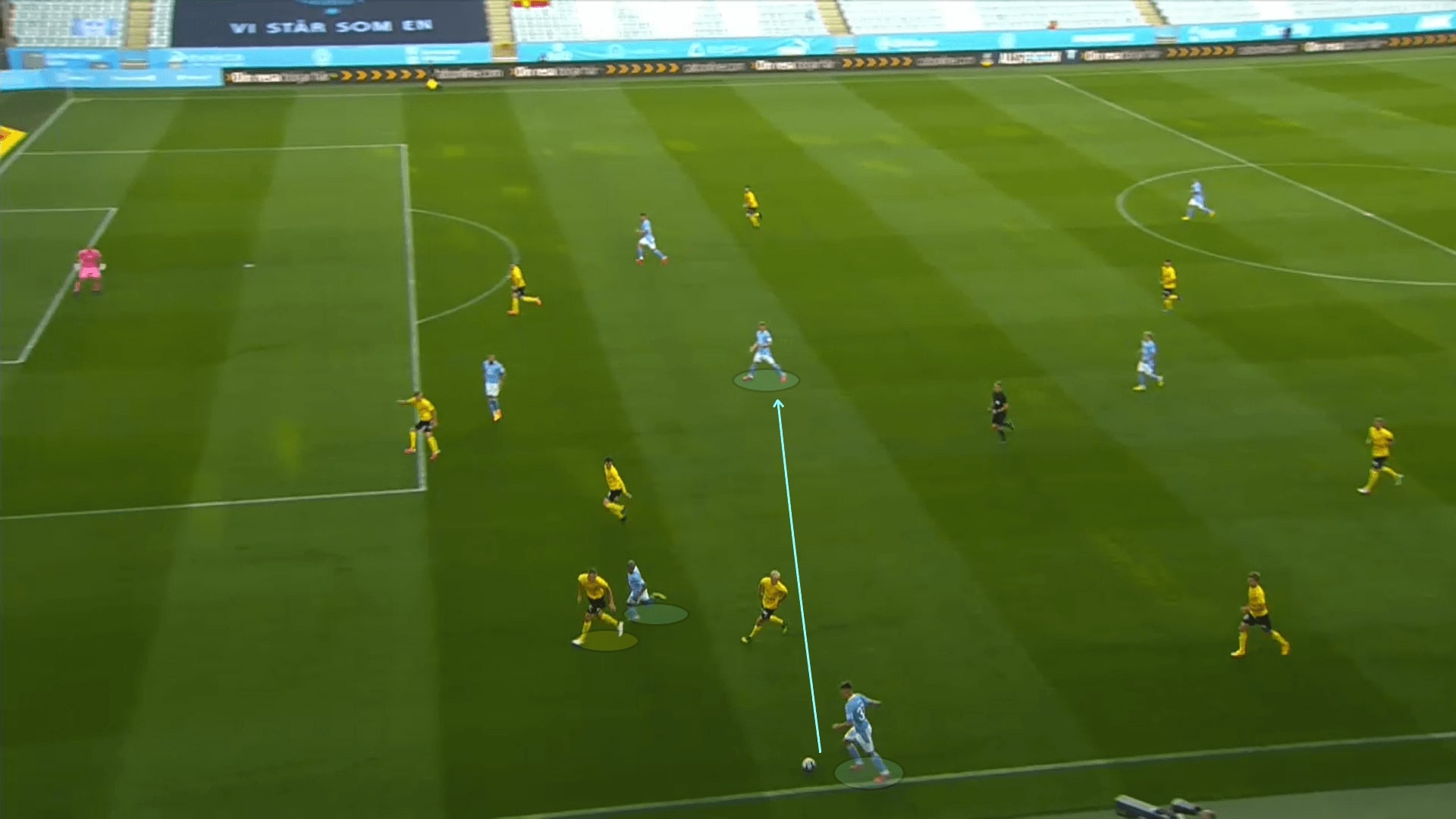 Despite winning and controlling the game, Malmö’s offensive approach was suboptimal. They had a very beautiful attacking shape as we outlined below: a 2-3-5 which occupied all five vertical zones on the pitch. This certainly had enough width and length to stretch a defence.

However, the overload occurred in the wide areas, where we drew the passing triangles. Malmö failed to exploit these numerical superiorities to develop the attack quickly at flanks. Instead, the tempo was too slow and Mjällby always had time to shift the block to nullify the numerical deficit.

The centre was overloaded by eight Mjällby players as we highlighted, they were staying compact. Given the close proximity of yellow shirts here, risky passes within the block could be suffocated by instant pressure, and the suboptimal body shape of players intensified the issue as mentioned. Therefore, hardly could Malmö attack from the closest route to the goal. 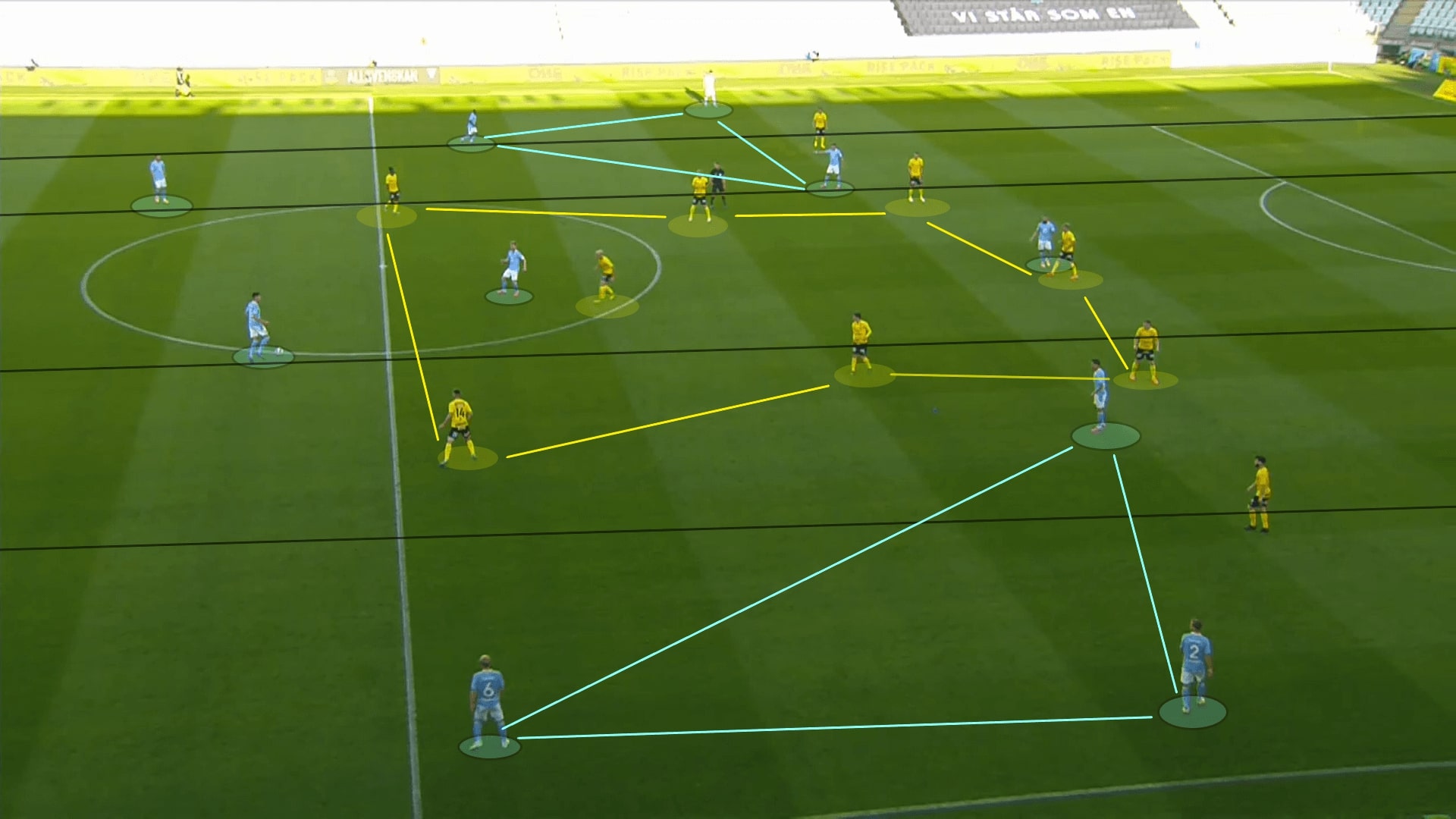 Consequently, Malmö always played the ball wide because the free players were often the full-backs. The right-back: Eric Larsson even had more passes (115) then the midfielders: Bachirou (75) and Lewicki (97).

The below graph has shown the attacks of Malmö by flanks: only 19% were developing at the centre. 81% were coming from wide areas and leaning on the right side.

This approach was suboptimal as the development of an attack was trapped at flanks, where options were limited. Malmö relied on the forward passes of Larsson and Knudsen to play the ball into the final third.

When attacking from the positional plays, the Malmö front players tended to make forward runs instead of trying the reversed movements as explained above. It was a bit difficult for the receiver to look at the pass while moving in such an angle, below is an example.

Larsson, as the free player, was not under pressure. However, none of the front players was dropping; on the contrary, they continued to make the forward runs and they had to look at the back while running. They would not know the actions of the marker as they could only look at either direction while running. 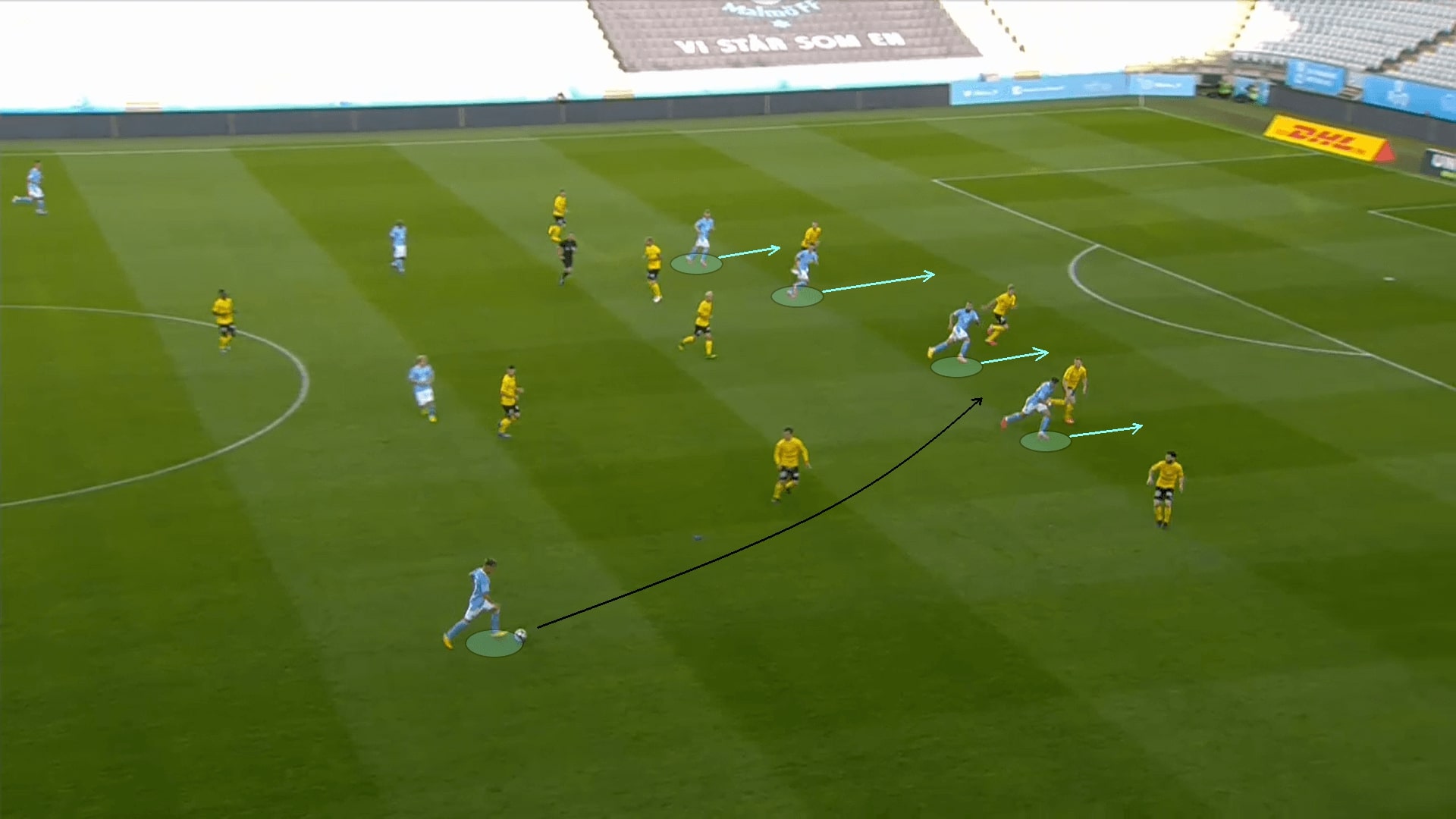 Since Malmö pushed high and committed numbers in the attack, spaces were available at the backline and they had to deal with a lot of defensive transitions. The defensive midfielders were working hard to cover the full-backs in this game, as Knudsen and Larsson were nullified if the clearances went beyond them.

Both Bachirou and Lewicki obtained impressive defensive stats in this game. They had 13 and seven recoveries in this game, and 60% of these occurred in the opposition’s half. This has suggested both pivots were vital to pick the second balls and suffocate the counter-attacks.

The below image has shown Bachirou was tracking the runs for Knudsen. Since the left-back pushed very high, he was far from accessing the carrier. 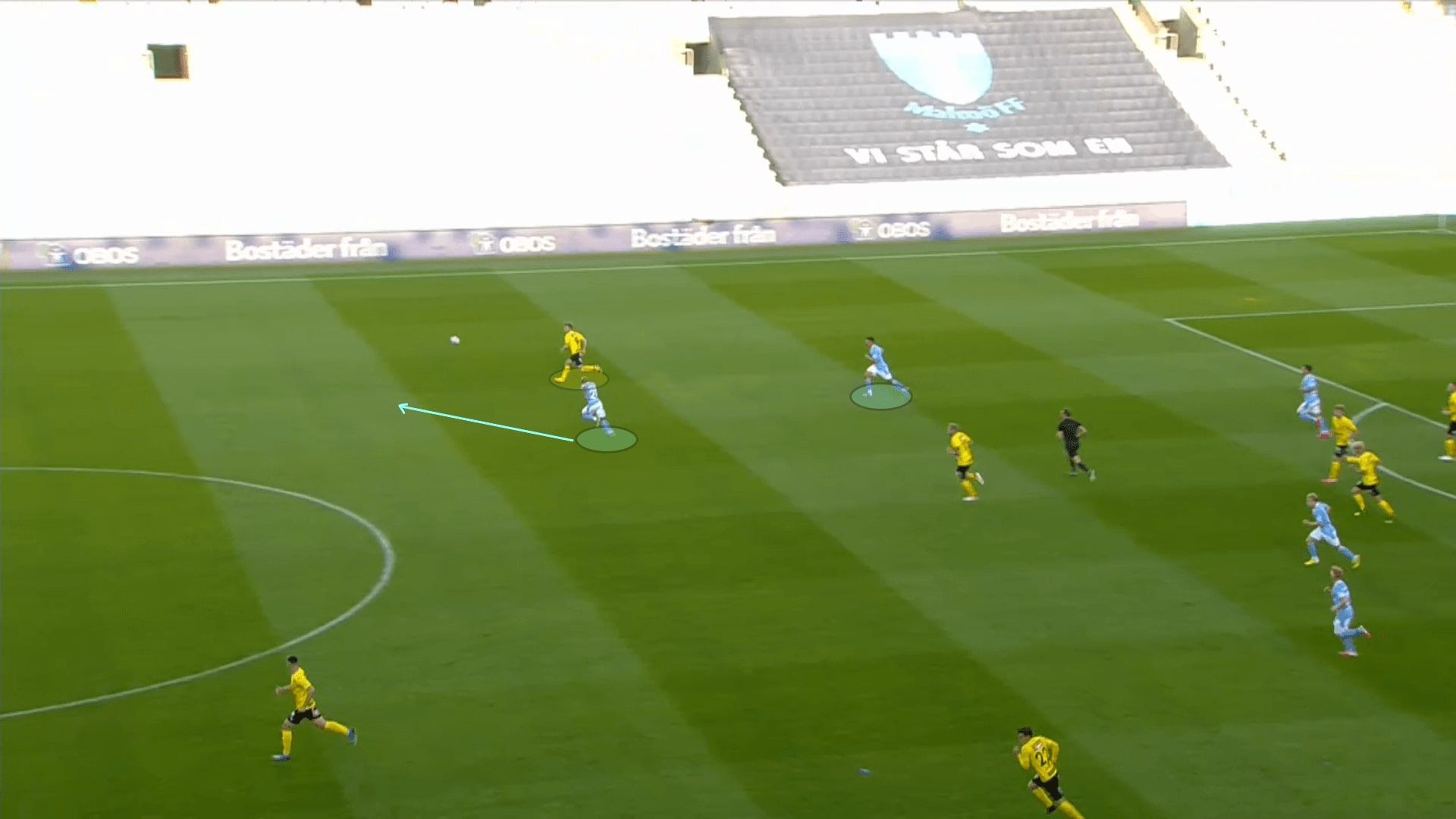 As hinted above, Mjällby were attacking spaces behind the full-backs in this game. They had nine counter-attacking opportunities in this game, a stark contrast to the home team’s zero. From these nine trials, they had two shots and Johan Dahlin nearly had to pick the ball from the back of the net.

The counter-pressing scheme of Malmö was a mix of ball-orientated and passing lane orientated. Since they attacked flanks, it was most likely to lose the ball in the wide areas. The initial carrier and the full-back often attack the ball instantaneously, while the pivots – Bachirou and Lewicki moved laterally or diagonally to the ball side to shut the central passing lane. The ball side centre-back should cut the forward passing lane.

These were included in this situation. Two players were on the ball, while Bachirou and the left-centre back: Lasse Nielsen were dealing with the corresponding targets.

However, sometimes they failed to regain the ball as the defence was exposed. Bachirou was 30 and Nielsen was 33, hence, the mobility hindered them to access the opponents. Bachirou was slightly late while Nielsen was slow to turn in this case, Mjällby entered the final third in this opportunity. 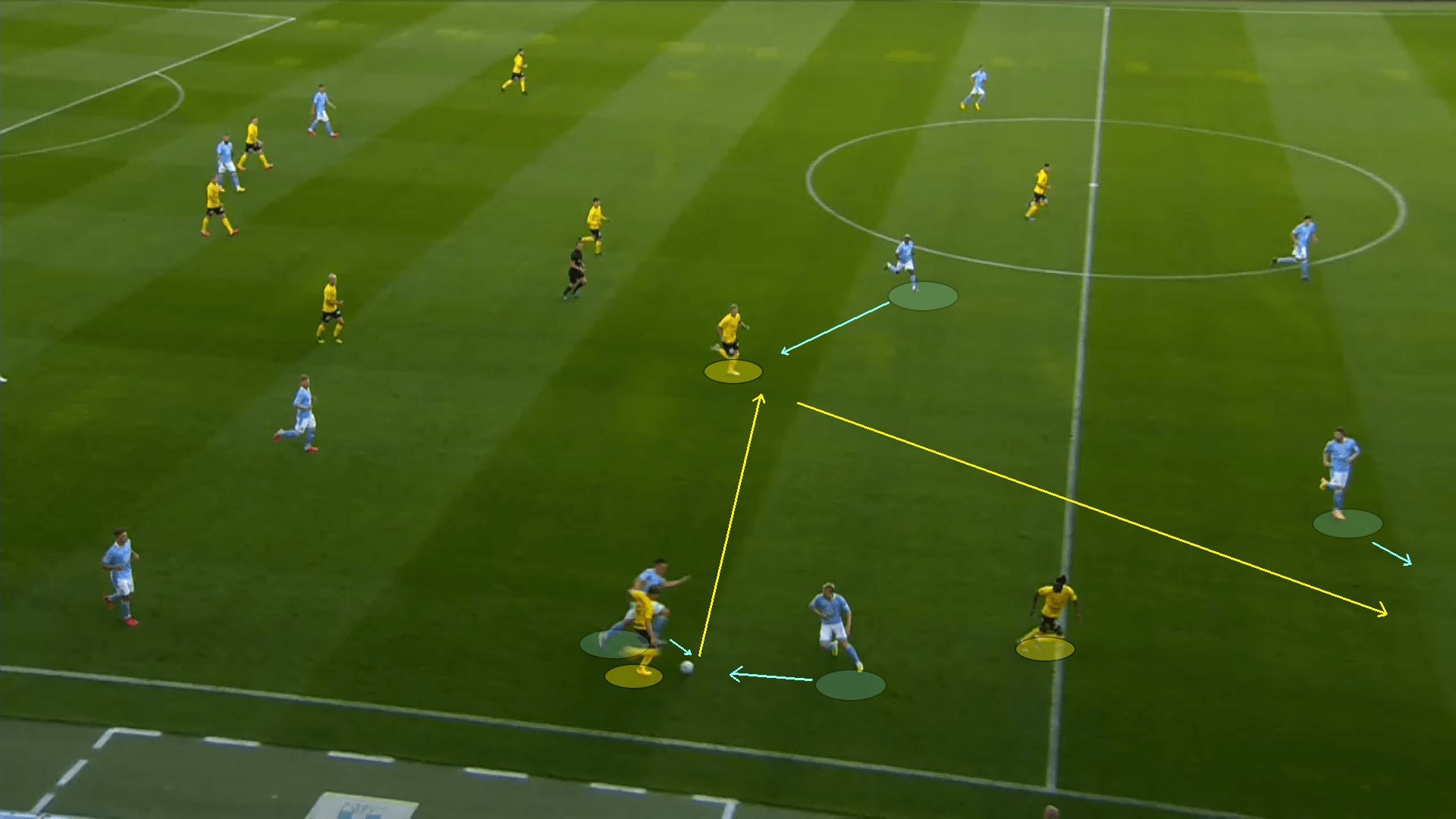 Mjällby were also well-prepared for the offensive transitions. Their striker – Moro was pleased to drop a bit and pull the defenders out in this phase. After that, the Ghanaian player would always look to run behind the defence or the full-backs.

The markings of Malmö were not tight enough were following Moro. Therefore, Moro often had the opportunity to turn as we demonstrated in this case. Again, they attack spaces behind the full-backs as we drew the pass here. 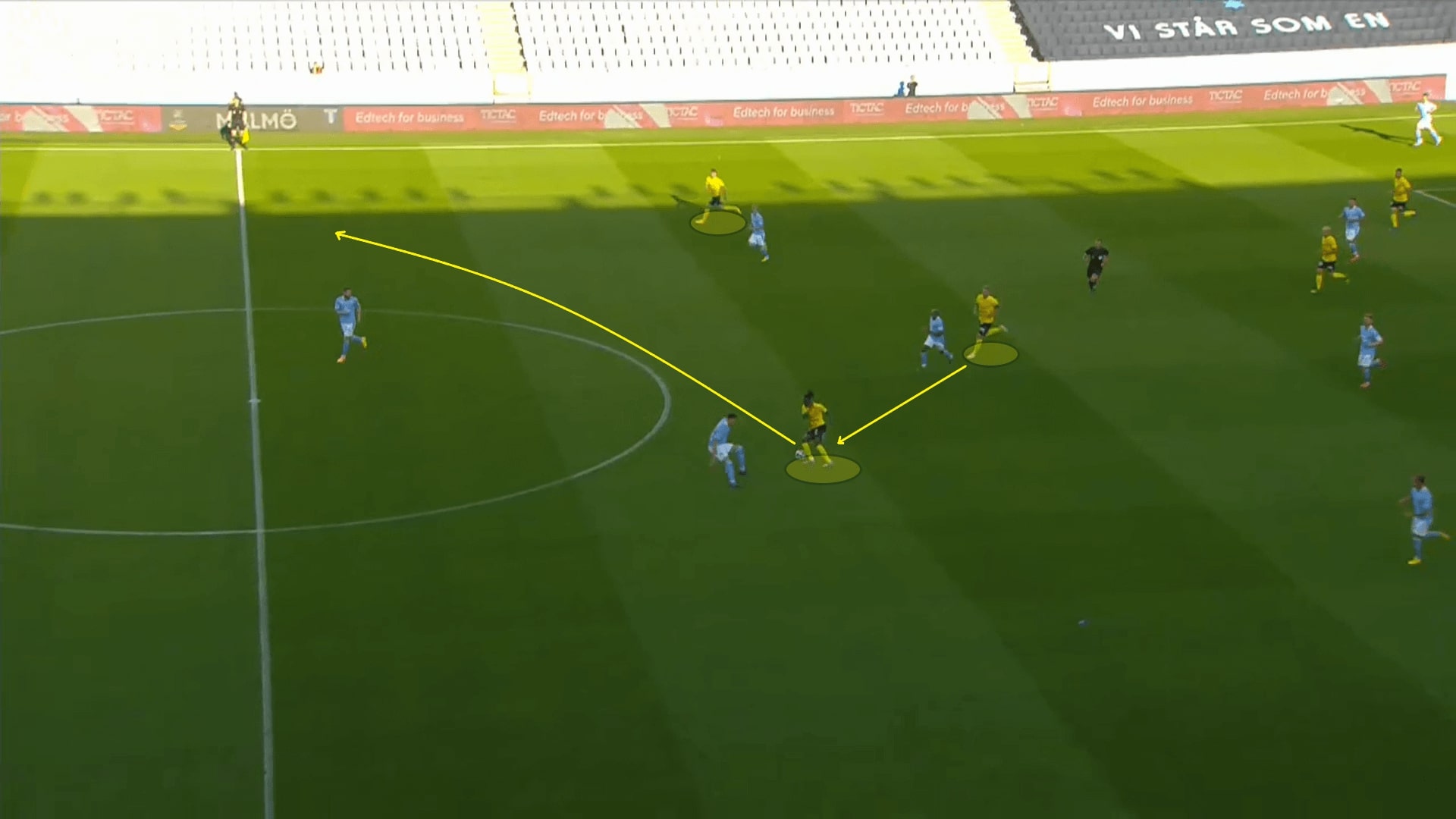 Lantz’s team were really not bad when comparing their xG: 1.33 was only slightly below Malmö’s 1.5. Another threat was their corners, which they generated three shooting opportunities out of five attempts. An opportunity of 0.65 xG was recorded in one of the corners.

We explain the general setup of their attacking corners in this image. The main targeted area was the far side, usually, they created a 2 v 2 situation before the delivery.

When the ball is played, it turned into two separated 1 v 1 situations as we drew here. One of the back-post players should block the other and left the other one attacking the far post. There were a few decoy runs around the six-yard box to create even more spaces at the far post.

The approach and tactics are fine, but the deliveries were the problem. They were too inconsistent and failed to reach the targeted area at times. 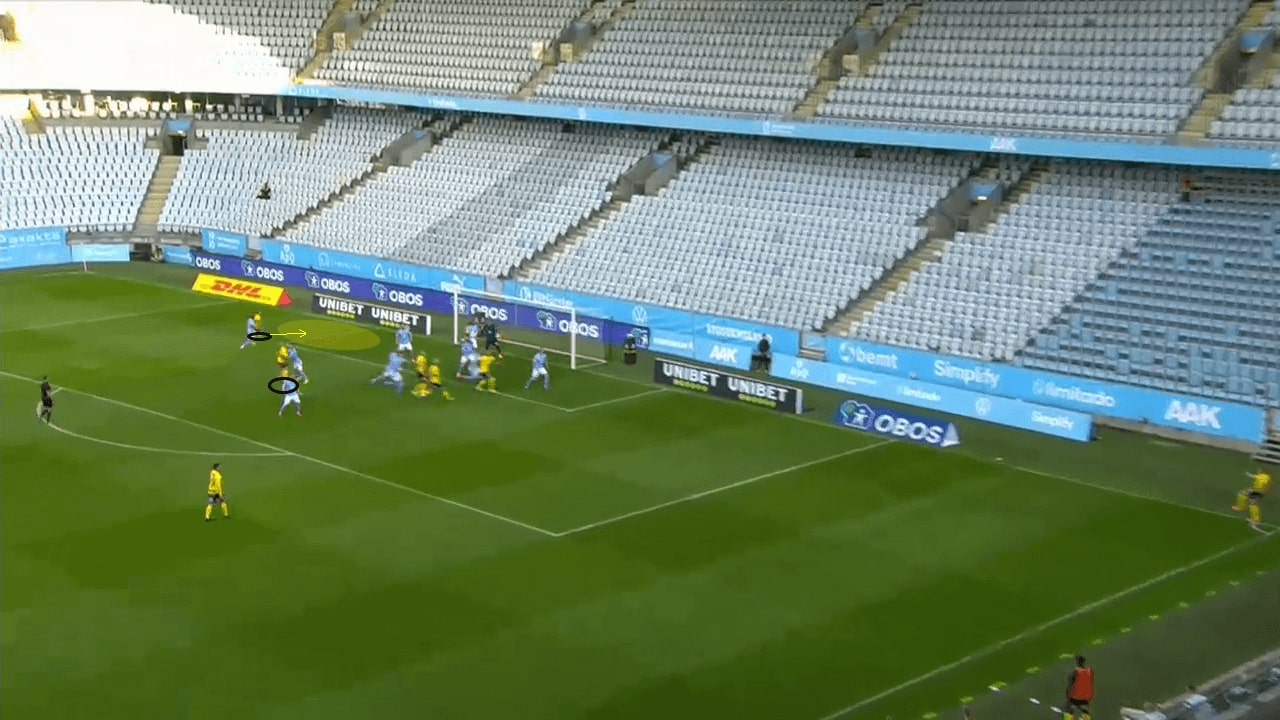 Mjallby were playing like a classic counter-attacking team today, having a few chances and nearly took the lead. They will have to move on to the next game.

Although Malmo won the game without much pressure, their story of struggling to deal with a midblock/low block continued. Many teams would set similar defensive tactics to deny Tomasson’s team in Sweden, and this is a domain they had to improve. How to utilize the full-backs to create the dynamics would be a key to the success this season.

In our future analysis, I will continue to cover Malmo. Some players such as the young Prica and Anel Ahmedhodžić were performing quite fine, we will see whether they are getting more chances in the future.