On a weekend of important fixtures in the 2. Bundesliga, no match signified this more than the Baden-Schwaben-Derby between Karlsruhe and Stuttgart. The hosts headed into matchday 31 in 16th place, precariously looking over their shoulders with Wehen Wiesbaden applying significant pressure. Stuttgart on the hand are sputtering towards the season’s conclusion, yet they entered confident they could turn their fortunes around at the Wildparkstadion.

This tactical analysis delves into the pivotal match in the south of Germany, what tactics both sides used, and how Karlsruhe snatched an unlikely 2-1 victory. 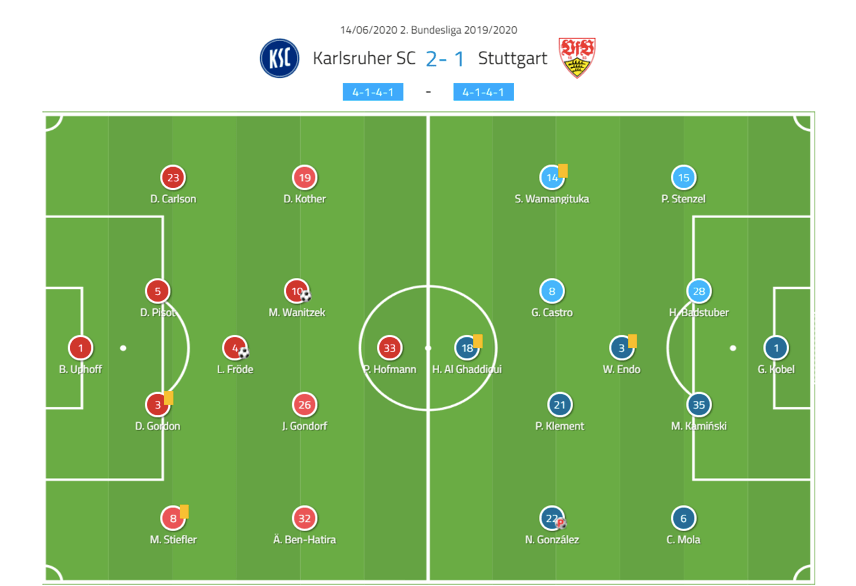 Christian Eichner didn’t tinker with his side despite Karlsruhe’s defeat at Erzgebirge Aue last time out. The changes were coming at right-back and left-midfield. Manuel Stiefler returns after serving his yellow-card suspension with Marco Thiede dropped to the bench. 20-year-old Dominik Kother was given the nod to make his first start, replacing Marc Lorenz.

The pressure is slowly beginning to intensify on the calm figure of Pellegrino Matarazzo; however, anything less than promotion will see the manager sent packing. Matarazzo made two changes from the team which drew 0-0 at home to Osnabrück. Philipp Förster and Orel Mangala were cast aside in favour of Congolese talent Silas Wamangituka and Philipp Klement. Klement would partner ex Borussia Dortmund midfielder Gonzalo Castro as the two number eights.

Karlsruhe aren’t a possession-based side; in fact, the Baden-Württemberg side are 16th in this statistical category with only 45.7%. Unsurprisingly, Karlsruhe only had the ball for 35% on Sunday against Stuttgart. The worry for Karlsruhe was the sides inability to retain possession when attempting to penetrate the Stuttgart defence. 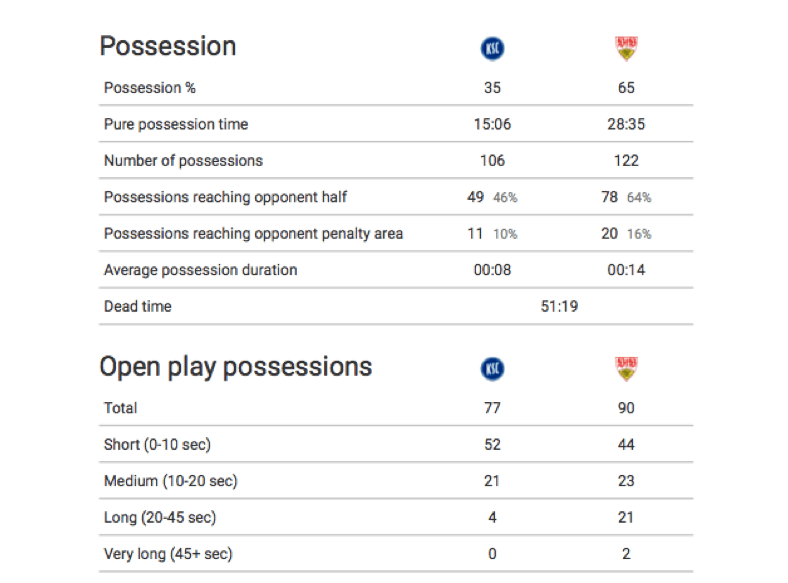 As the possession statistics show, Karlsruhe only had possession for an average of eight seconds. Six seconds less than Stuttgart through the duration of the match. More concerning for Eichner’s outfit is that 67% of total open play possession for Karlsruhe were ten seconds or less. But why was this? 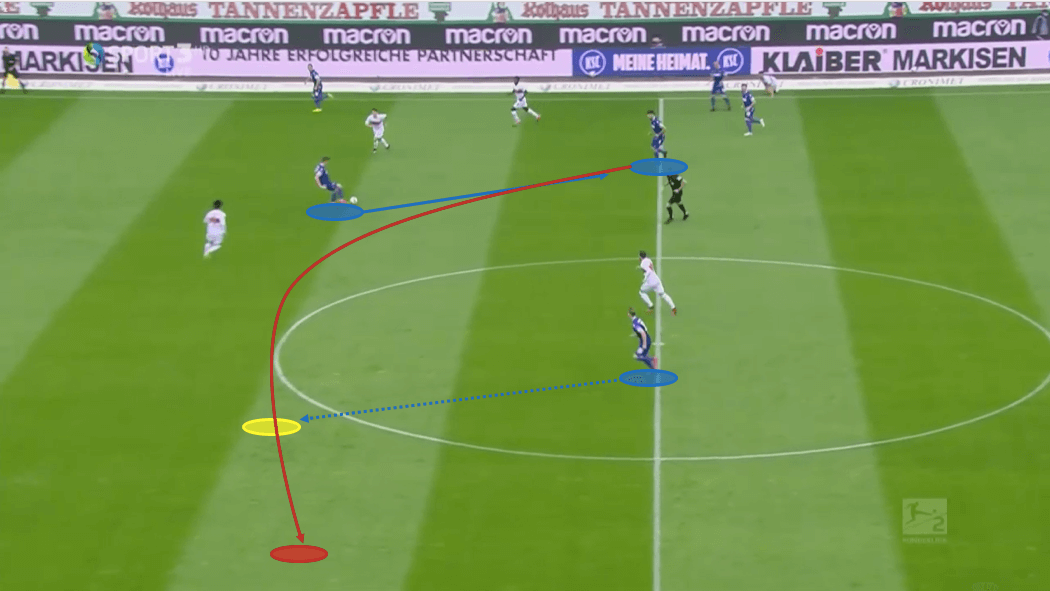 Well, it’s a combination of skill error and decision-making process which turns a Karlsruhe attack into a turnover. The first example is a skill error by Lukas Fröde. As the ball is played back to Fröde, he spots Kother running into space. The Stuttgart midfield is in all sorts, and the defence is trying to remain compact out of the picture. Fröde has plenty of time, and when he receives possession, the midfielder opts to play it first time. As a result, the ball trickles out for a throw-in. 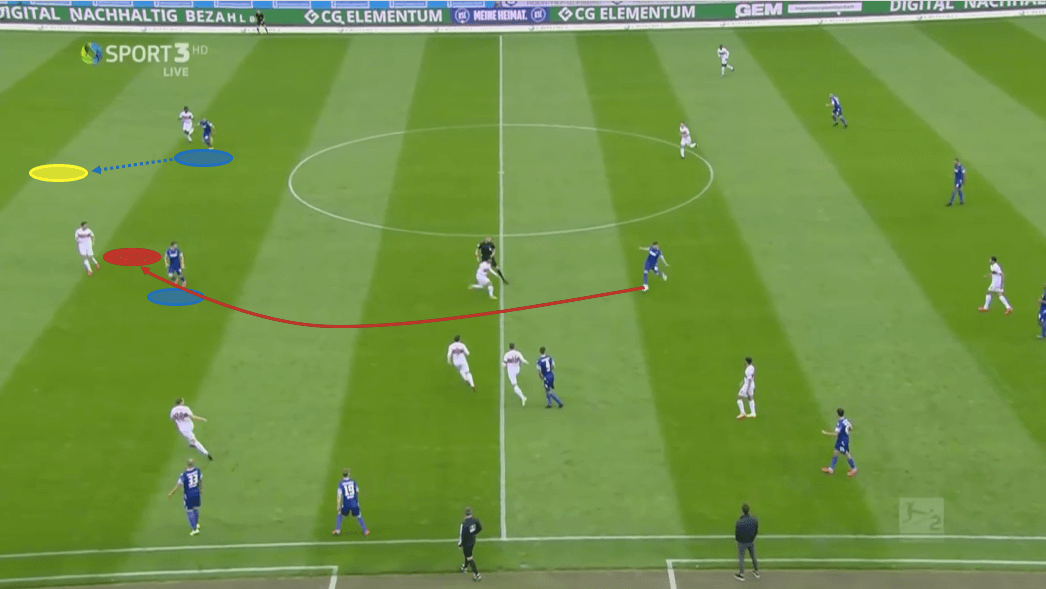 The final culprit is on-loan Freiburg midfielder Jerome Gondorf who, much like Fröde succumbs to playing a ball he can’t complete frequently. As Gondorf receives from Fröde, he is presented with two options. A medium passing option to Marvin Wantizek or by-pass Marcin Kaminski and hit Anis Ben-Hatira who was being marked by Chelsea loan defender Clinton Mola. Like Fröde, Gondorf has time to take a touch yet opts for the first time approach, which results in Stuttgart picking up possession. Gondorf completed only 70% of passes on Sunday and butchered the ball like many of his teammates. All be it against Stuttgart, a 67% pass completion won’t cut it when your fighting to survive.

Stuttgart for the majority of the 2. Bundesliga have been the benchmark for pressing. In the game against Karlsruhe, it was no different where Stuttgart managed a pressing intensity of 5.7. This is better than the season average for Stuttgart, and during this contest, it becomes ever more present that Matarazzo’s side would ramp up the intensity. 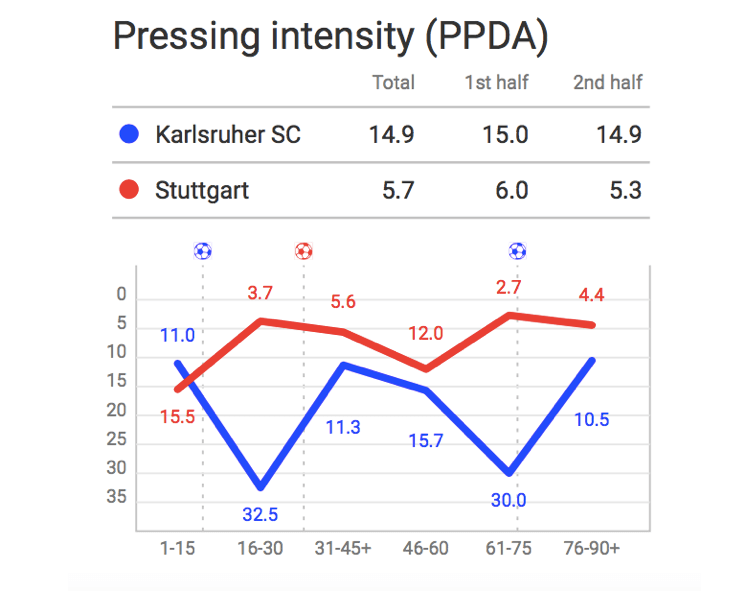 As the table above showcases, Stuttgart would slowly build the intensity within the opening 15 minutes of each half. Midway through each half, Stuttgart would peak with 3.7 Passing Per Defensive Action (PPDA) between 16 to 30 minutes and 2.7 PPDA during minutes 61 to 75. This section of the analysis delves into Stuttgart’s press. 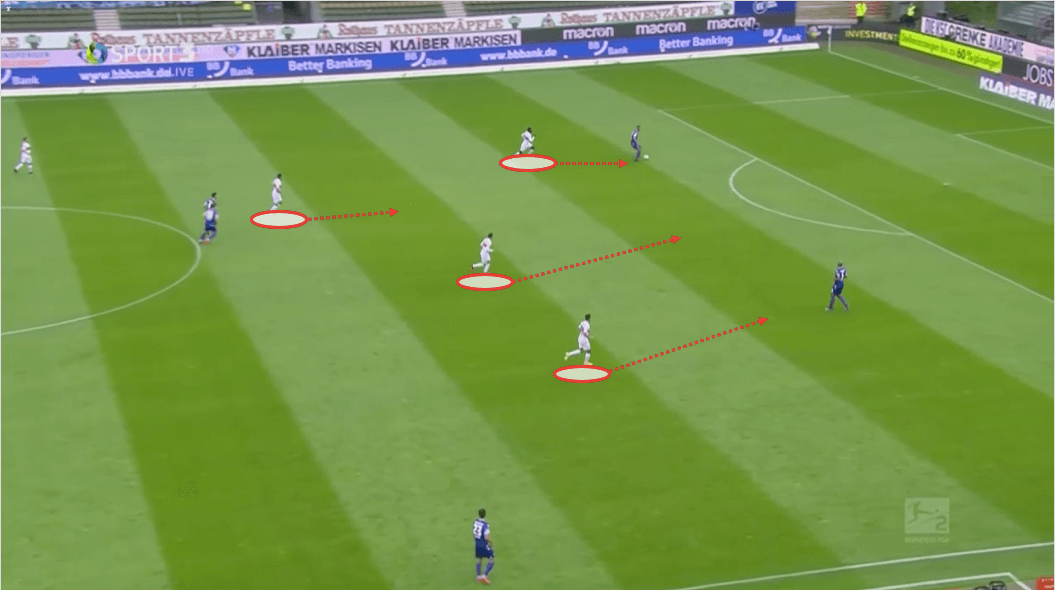 Our initial scenario comes in the first half shortly after conceding. Karlsruhe feels under no immediate threat. However, Stuttgart bring four players into their attacking third to try and force an error. Much like Karlsruhe does, the two wingers plus the striker and one of the number eight’s will press the defensive player on the ball. The approach would work on most occasions, especially against teams who play short passes out the back. However, Karlsruhe will use the keeper as a bailout to gain territory instead of retaining possession. 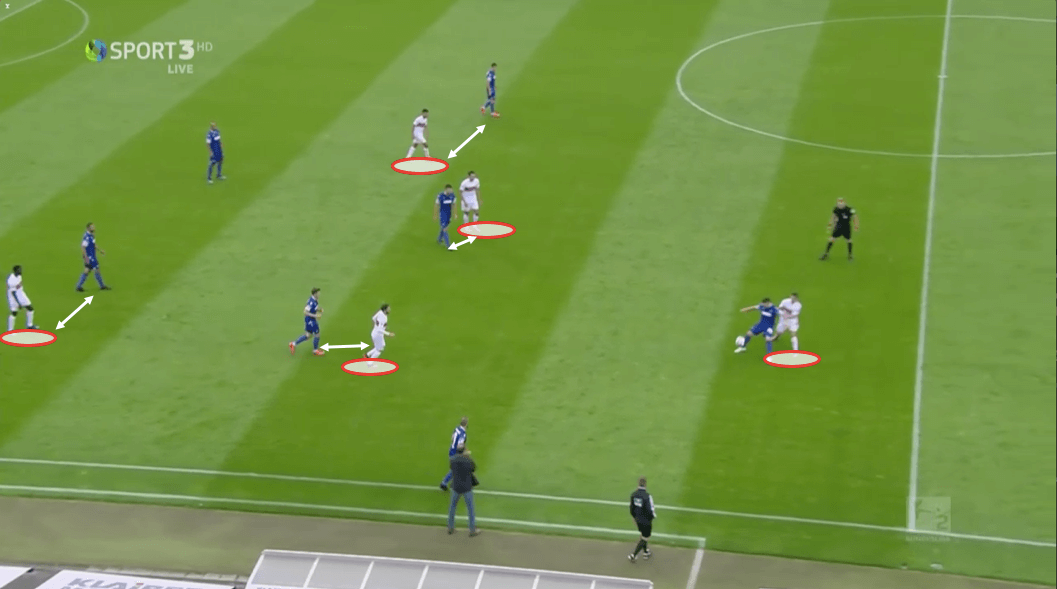 Stuttgart would fight for every ball in the second half, and we saw a lot more man-to-man pressing involved. When Karlsruhe would foray out wide, they would be forced to play sideways as an option behind would be covered. Again, there is leeway for Karlsruhe to just clear, and when the heat was on, they did take the simple option. Stuttgart’s pressing was intense; however, it didn’t reap the rewards they would’ve hoped. It could also be suggested that Stuttgart only really pressed at an extreme level straight after conceding.

Throughout a gruelling season, Karlsruhe have tried several different shapes to try and stem the bleeding. They are a weak defensive side which concedes plenty of high scoring opportunities. Sunday was no different with Karlsruhe 14 shots on goal with six being on target. The only Stuttgart goal from Nicolas Gonzalez did come from a penalty, and in fairness, it was an excellent performance from keeper Benjamin Uphoff which kept that intact. This section dives into defensive aspects of Karlsruhe’s play. 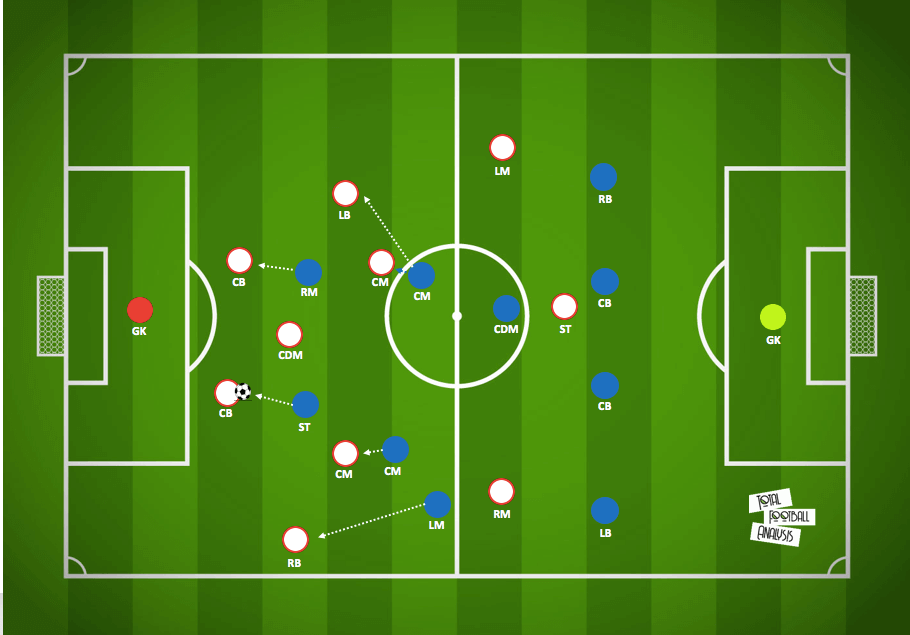 First, we wanted to showcase the defensive press at work from Karlsruhe and the work put in by Eichner. Karlsruhe are by no means one of the best at pressing, yet they showed to be quite competent when they did. As hinted earlier, Karlsruhe and Stuttgart applied a very similar principle when pressing in the 4-1-4-1. The strikers, wingers and number eights would press while the number six, which in this case is Fröde sits backs. Fröde becomes the first line of resistance if the press is defeated. Forcing an error is critical, but doing it in Karlsruhe’s attacking third was vital for their press to succeed. 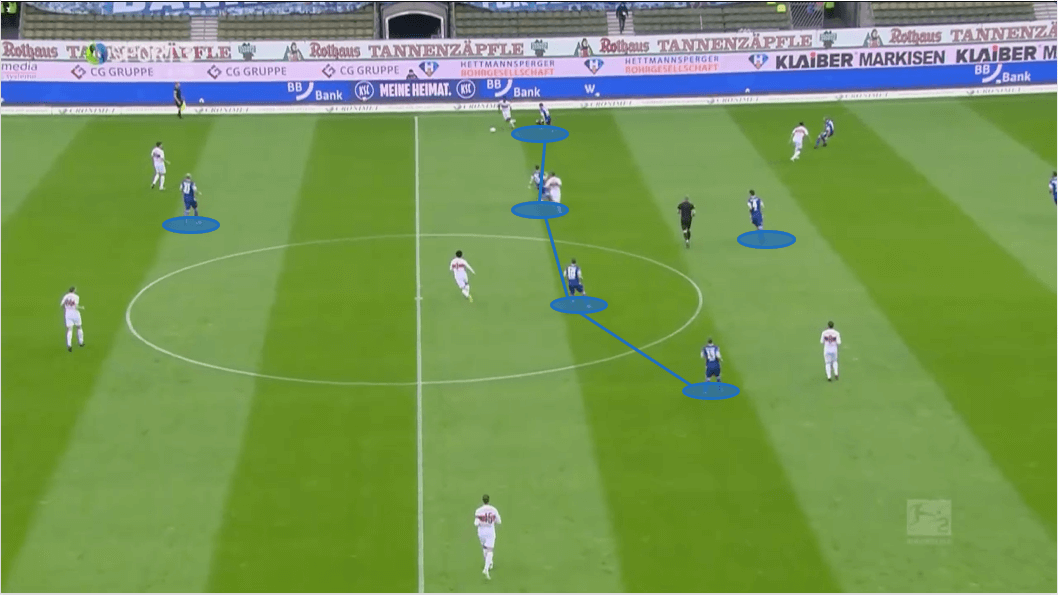 But how about the shape? As mentioned before Karlsruhe played a 4-1-4-1 which is a somewhat defensive set-up. The two number eights are interchangeable in the attack, and the number six can be left vulnerable if those ahead are caught out of position. We can see above how the shape works with Wantizek and Gondorf intertwined. If possession is on the wing like this situation, the wingers will tuck and invite a potential switch.

Karlsruhe were required to be disciplined, compact and minimised mistakes. While at times that seemed difficult on the ball, Karlsruhe were able to limit their defensive errors which went a long way for them winning this game.

Marvin Wantizek will be a player of considerable interest to teams within the 2. Bundesliga and elsewhere in Europe if Karlsruhe succumb to relegation. The 27-year olds first season in Germany’s second tier has been a resounding success with five goals and league-best 11 assists. The midfielder can be used in several different roles but thrives playing behind the striker or in a dual eight set-up. In a system which favours one striker, Wantizek is a weapon. The Bruchsal native was pivotal against his former club, let’s look at his best actions. 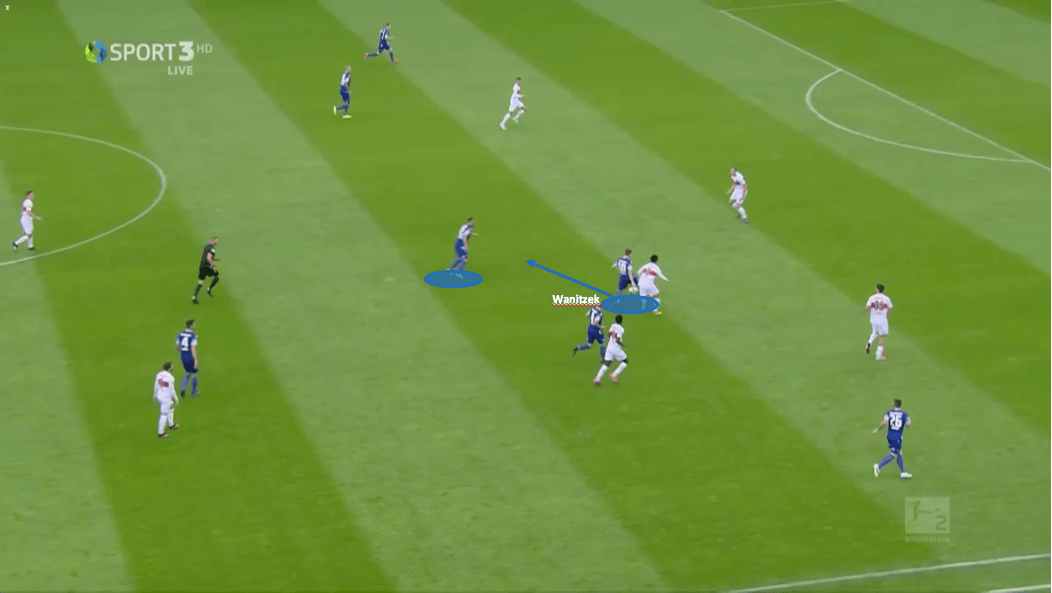 Karlsruhe’s number ten had another fantastic day on the ball, completing 84% of passes attempted. Wanitzek can play a variety of balls, but it’s his ability to play the “hockey” pass which can prolong or develop a vital attack. As shown above, Wanitzek’s quick pass to Ben-Hatira allows Karlsruhe to spread the field entering the final third and enables the hosts to create an offensive threat. This didn’t result in a goal for Karlsruhe but does show how pivotal the simple pass can be. 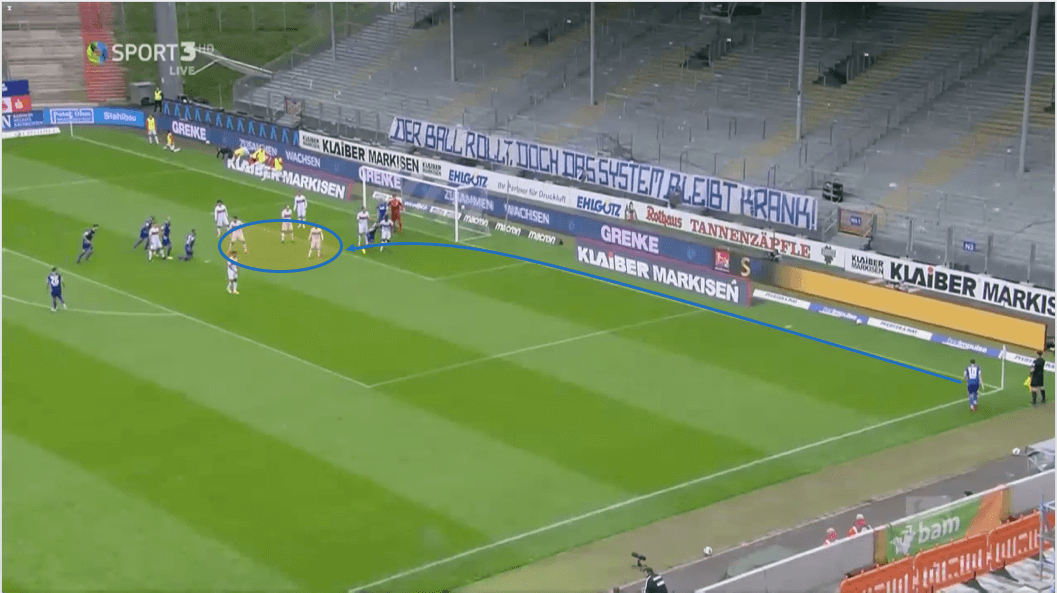 While being a threat when going forward, Wantizek is a wizard from a dead-ball situation and does have his fair share of assists coming from this discipline. It was Wanitzek’s corner which leads to Fröde scoring Karlsruhe’s match-winning goal. Although he won’t be credited with an assist, it’s the routine itself which is worth analysing. Stuttgart plays a zonal defensive scheme at corners, which does allow runners to penetrate the flat-footed defenders. If the ball comes to ground, it can become chaotic. When Stuttgart failed to clear Fröde was there to nod home. 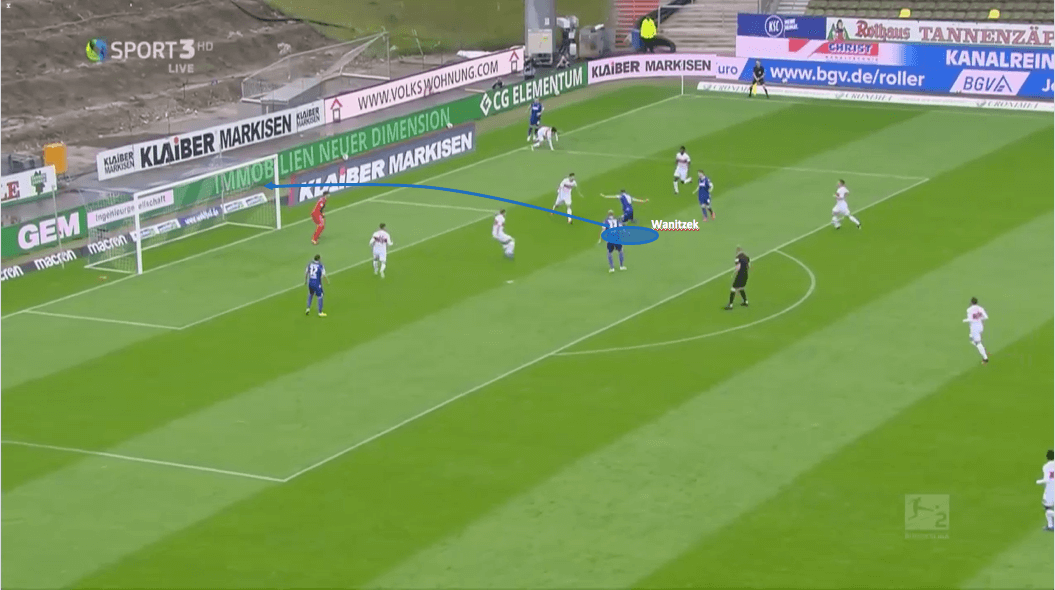 Wanitzek is also a massive goal-scoring threat and did open the score-sheet for Karlsruhe. Currently second at the club for goals scored behind striker Philipp Hofmann (13), Wantizek has scored from a variety of different avenue. On Sunday, his goal can be accredited to hard off the ball running and putting himself into a great position. That is unopposed in the 18-yard box and having enough time to take a touch and shoot. Deep down we know Gregor Kobel should’ve done a lot better, but it does prove the wizardry that is Wanitzek on the ball.

A football game without fans isn’t the same, a derby which has such a proud history and rivalry within the region without fans is a disaster. However, Karlsruhe did their fans proud with a gutsy performance despite the lack of domination. In Eichner’s short tenure at Karlsruhe, this is undoubtedly his most significant win so far. With Nürnberg’s defeat in the Franconia Derby against Greuther Fürth, Karlsruhe moves out of the bottom three for the first time since matchday 20.

It would have felt like losing three times over for Stuttgart. Losing to your bitter neighbours in a significant tilt, Hamburg and Arminia Bielefeld winning and being bumped down to third. Arminia Bielefeld gained promotion theoretically thanks to a 4-0 win over Dynamo Dresden, now Stuttgart must fight it out with Hamburg and Heidenheim for the remaining automatic promotion spot. With three games to go, anything but promotion will not stand in the big smoke.