RB Leipzig welcomed Borussia Dortmund to an empty Red Bull Arena in what was an important game for the home side as they looked to secure a top-four finish in the Bundesliga. However, Julian Nagelsmann’s side were undone by a supreme performance by Dortmund, who have now secured 2nd place after Bayern Munich clinched the title earlier in the week. A double from Erling Braut Haaland was enough for Lucien Favre’s side to take three points but luckily for Leipzig, their top-four rivals Bayer Leverkusen were unable to capitalise as they also lost 2-0 to Hertha Berlin. This means that a Champions League place is all but secured for Leipzig.

This tactical analysis will examine the tactics used by both Köln and Leipzig in this Bundesliga match. The analysis will highlight Dortmund’s success in build-up play, Leipzig’s set-up and their tactical changes throughout the game. 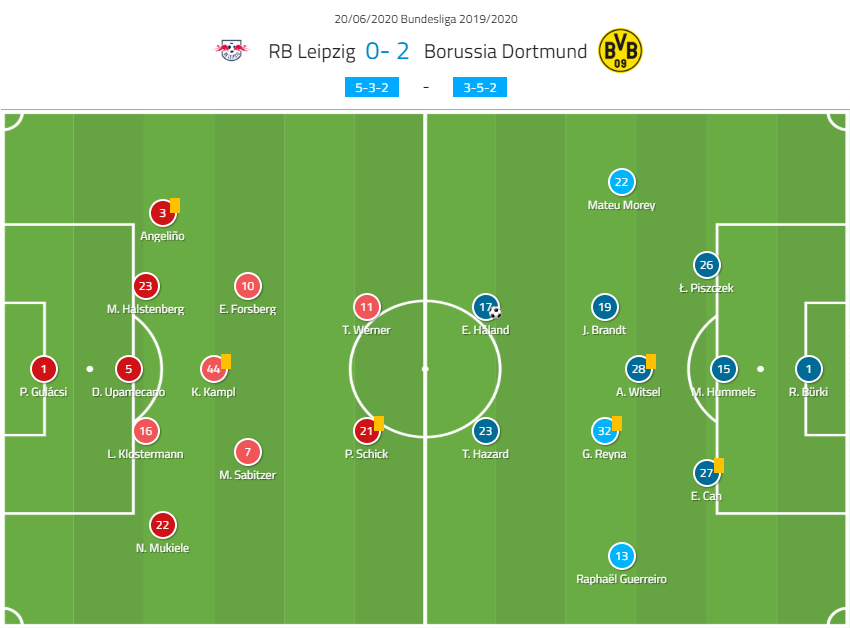 Leipzig manager Nagelsmann organised his starting line-up in a typically flexible 5-3-2 formation. Péter Gulácsi once again starts in goal with a familiar back five of Angeliño, Marcel Halstenberg, Lukas Klostermann, Dayot Upamecano and Nordi Mukiele. Kevin Kampl, Marcel Sabitzer and Emil Forsberg started in the midfield three, staying very compact in the middle of the pitch. The complementary duo of Timo Werner and Patrik Schick completed the starting eleven as a front two.

Dortmund began with a similar set-up as Leipzig but in a 3-5-2 formation that they used for the majority of the fixture. Favre opted for a back three consisting of regular starters Łukasz Piszczek and Mats Hummels and paired them with Emre Can. Axel Witsel sat as the single pivot with Giovanni Reyna and Julian Brandt just ahead of the Belgian. The wing-backs were Raphael Guerreiro and Mateu Morey, who replaced Achraf Hakimi. Thorgan Hazard started up front alongside teenage marksman Erling Braut Haaland, who now has 13 Bundesliga goals in just 14 appearances.

To analyse Dortmund’s quality in the build-up phase, we first have to touch on Leipzig’s set-up in the mid-block.

Leipzig are a great pressing machine under Nagelsmann and is a key tactical principle that not only Leipzig use but all the Red Bull franchise teams. With that being said, Leipzig were standoffish in the first half against Dortmund, which can be seen in their pressing intensity. Leipzig’s PPDA in the first half was a stunning 24.6, which means that they allowed nearly 25 passes by Dortmund before a defensive action. Below, is an image of how Leipzig were structured in the opening 45 minutes. 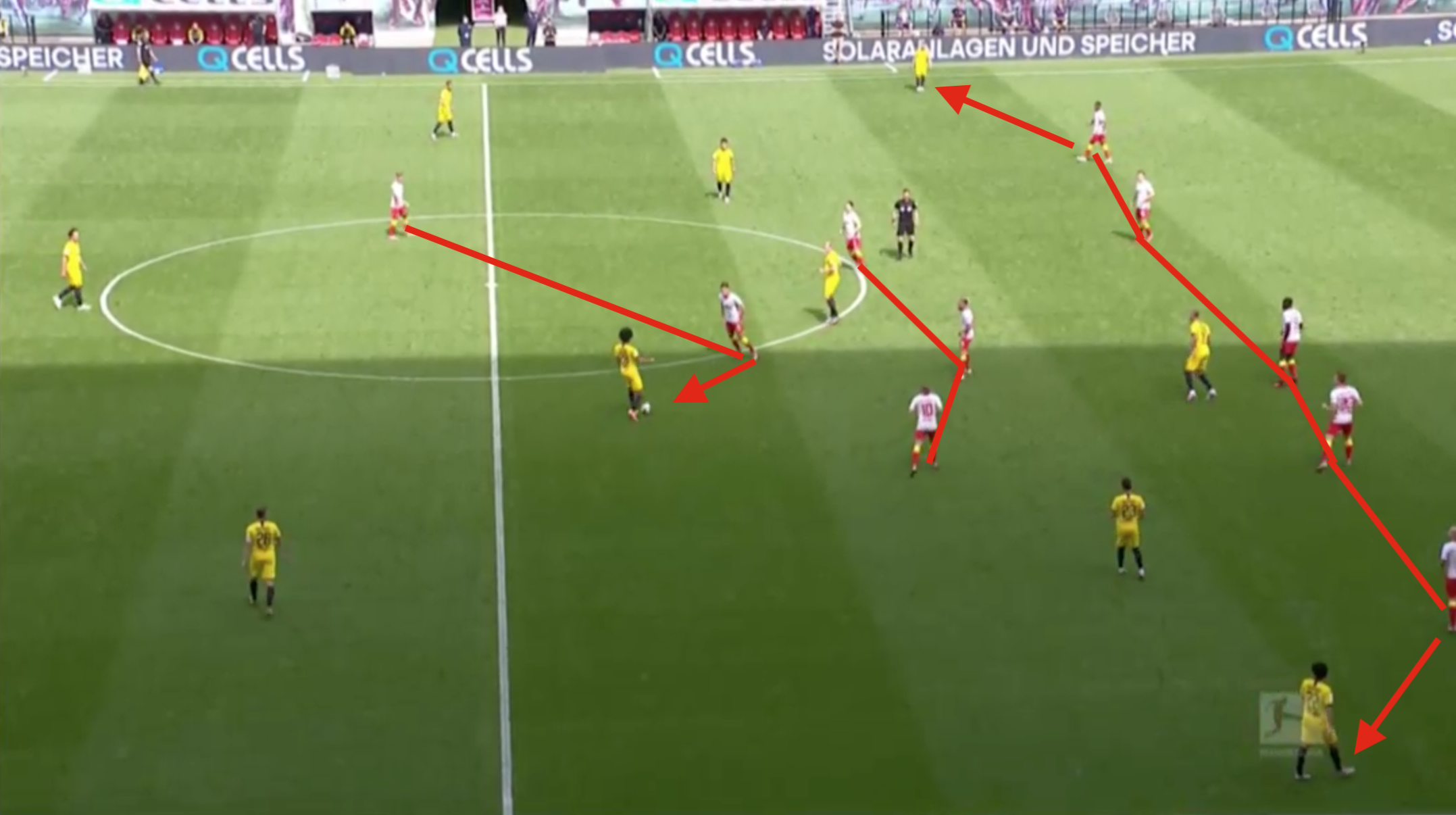 As mentioned before, Leipzig lined up in a 5-3-2 and the image above showcases their shape as such. Normally, the two strikers are just ahead of the single-pivot Witsel but because he has the ball, Schick dropped back to put pressure on the ball. Leipzig like to put pressure on the ball player and the front two are the first ones to do so. The three in midfield are extremely compact and try to shield the defence but they also look to put pressure on players who get into the midfield area. With the midfield compact, Dortmund in theory and practice would play it into the wide areas and utilise their wing-backs. In this instance, Leipzig’s wing-backs immediately jump to them to force a turnover.

Now that we have seen Leipzig’s extremely compact shape and lack of intense pressing, we will look at how Favre’s team were able to progress the play well. Ultimately, Dortmund had two main effective ways to launch an attack against a compact defence. The first was to utilise Leipzig’s idea to pressure the player in possession to create space and this can be seen below. 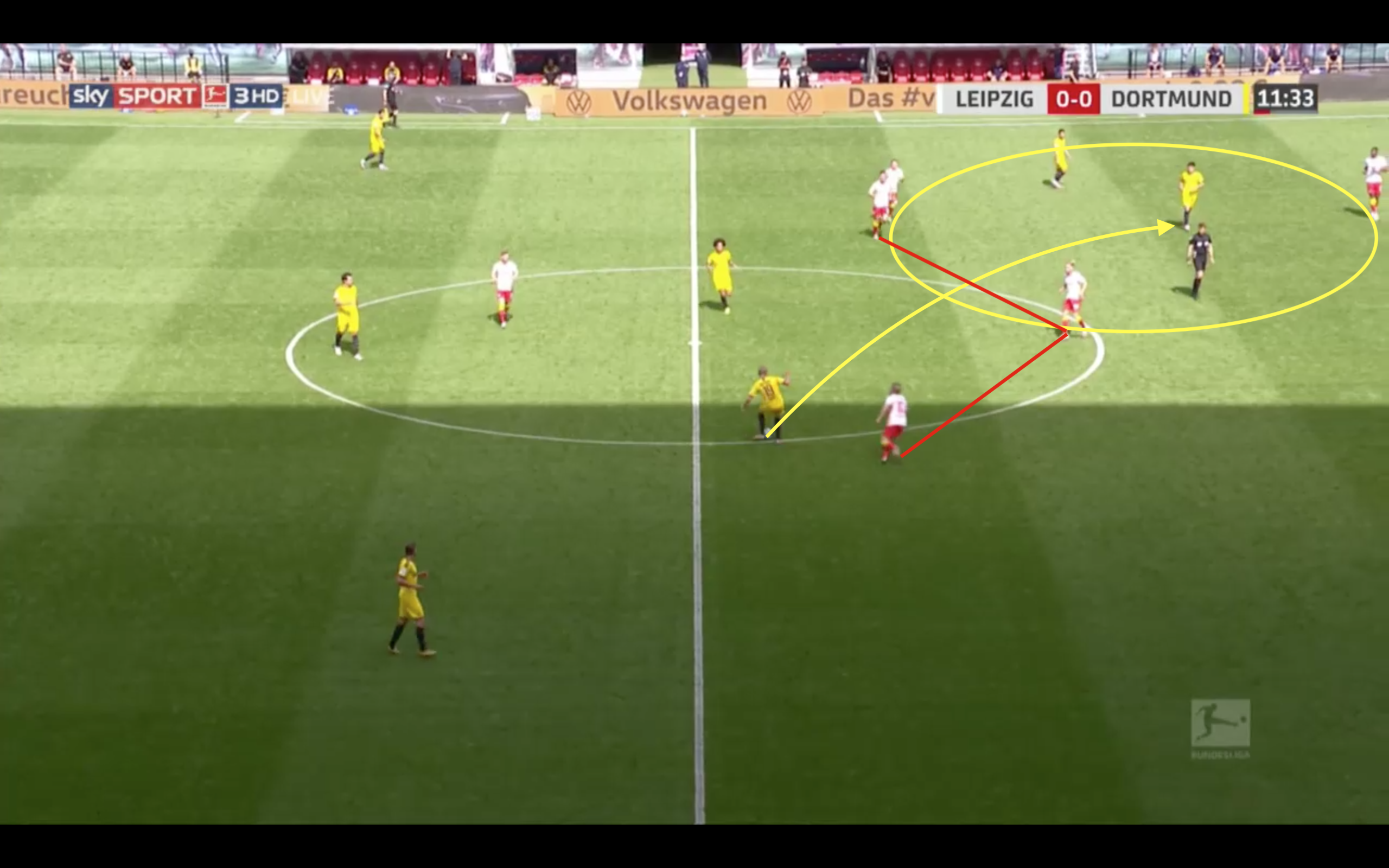 The picture is taken a couple of seconds after Leipzig committed their midfield and one striker to pressure Emre Can, the left centre-back. Following this, the distance between each player in Leipzig’s midfield trio had become too big and they had also become too high. This left ample space for, in this case, Julian Brandt, to find an easy vertical pass into Gio Reyna who now has space in between the lines and can connect with either the overlapping wing-back or the two forwards.

Given that only Brandt is the capable progressive passer in the midfield trio that Dortmund lined up with, Dortmund had to use their centre-backs to build-up play. Mats Hummels and Can did this brilliantly but the best way they did this was via the long ball. 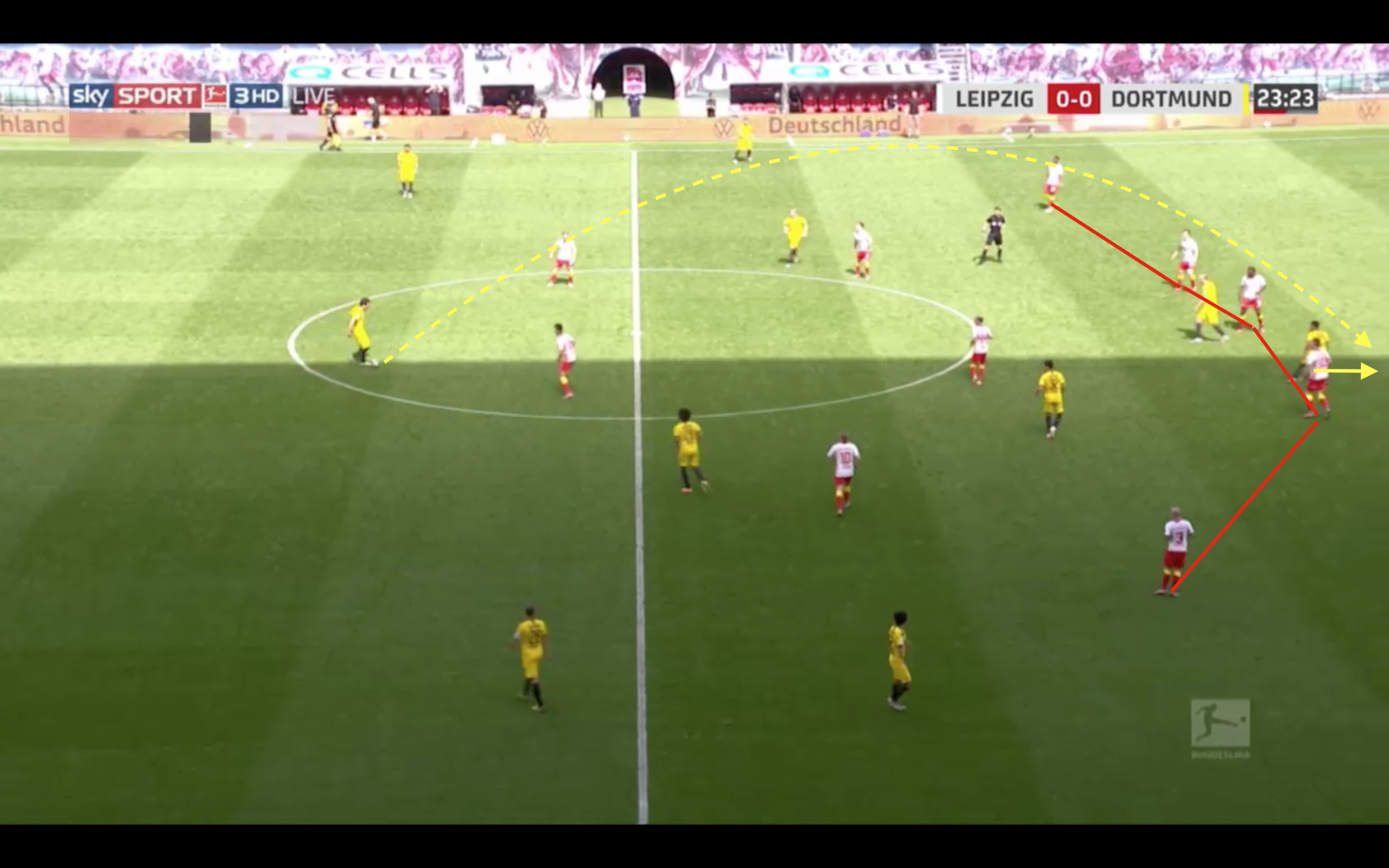 The image above showcases a very simple action that was used multiple times by Dortmund but could have been easily preventable on Leipzig’s end. The Leipzig defensive line were not always on the same wavelength and either Upamecano or Halstenberg were caught slightly too deep, allowing Haaland and Hazard to make runs in behind into space. With the quality of passing from Hummels and Can, Dortmund were able to exploit the lack of communication in Leipzig’s defence to bypass the compact structure they had to have an opportunity at the goal. In this scenario, Hazard went through on goal and had a shot saved by the keeper and this happened multiple times, however, it was mostly via Haaland since he is the more capable runner.

Nagelsmann’s team were fortunate to go into half-time only 1-0 down and this is shown by not only the previous section but also the fact that Wyscout’s expected goals model had Dortmund at 1.38 xG and with Haaland at 1.17 xG.

Of course, the manager recognised this and made changes at half-time, not only systematically but personnel-wise also. Marcel Sabitzer’s first-half injury forced Dani Olmo to be substituted in but upon the beginning of the second half, Tyler Adams was brought in for Lukas Klostermann. This change helped Leipzig change into a 4-2-3-1 formation and a dramatic increase in intensity, especially in pressing, helped them gain possession of the ball, which they lacked so dearly in the first half. The change in pressing intensity and quality can be seen by the fact that their PPDA went from 24.6 to an incredible 7.9 in the second half. 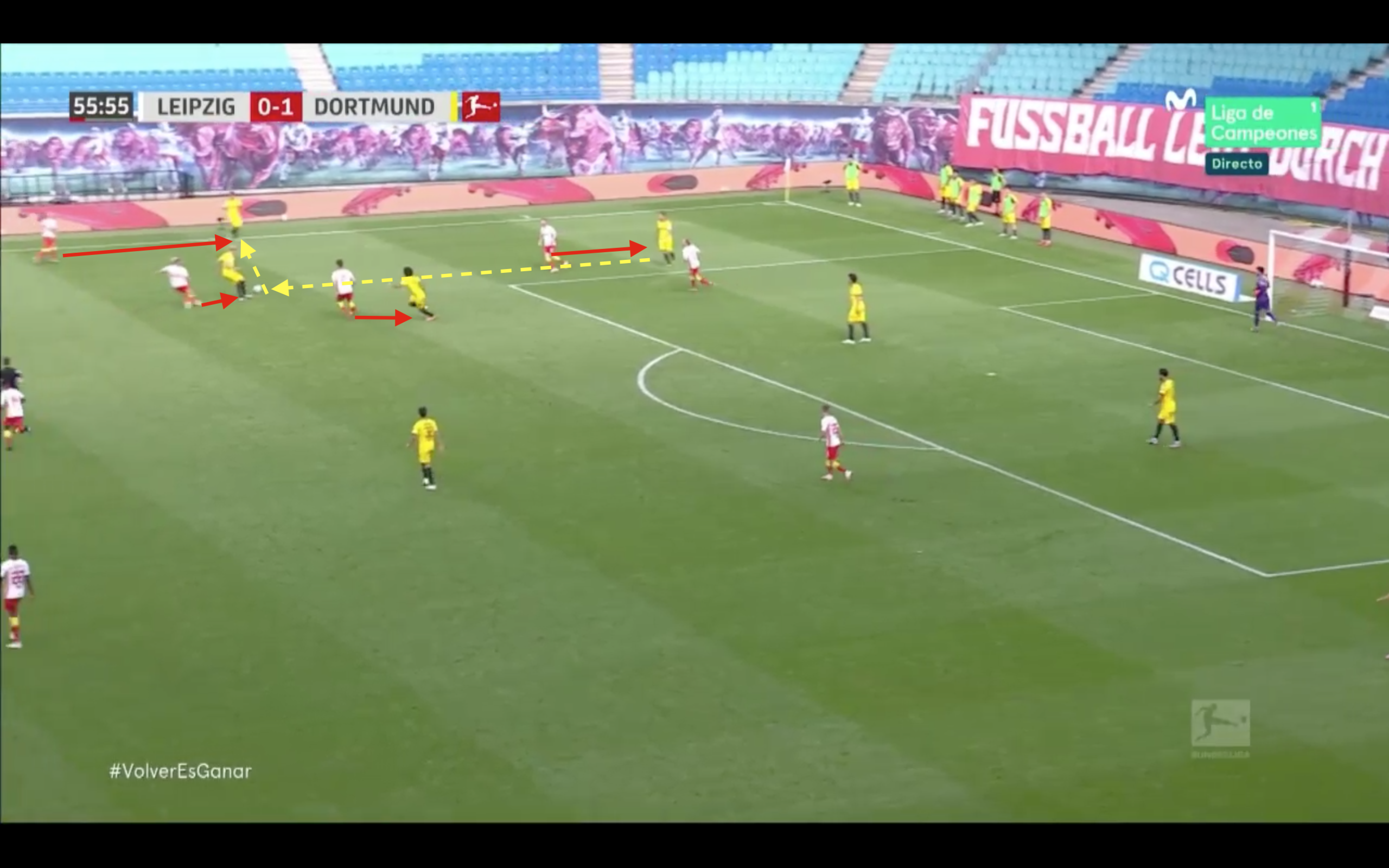 The example above shows the immediate change in Leipzig’s tactics. Teams, especially in the Bundesliga, normally do press high in situations where the play is being built-up from the back but in the first half, Leipzig were unwilling to do so. Piszczek finds Brandt who drops back to help as an extra passing option before laying it off to the Morey. As the image shows, each realistic passing option was already pressed by Leipzig players and when Morey receives the ball, he only can dribble past the defender. Luckily for him, Manchester City loanee Angeliño makes a rash challenge trying to win the ball back and Dortmund are able to win a free-kick. For the most part, the pressing worked extremely well for Leipzig as it was one of the main factors that helped reduce the amount of possession Dortmund had in the second half. Favre’s team had an average of 65% possession in the first half to a very low 41% in the second half. 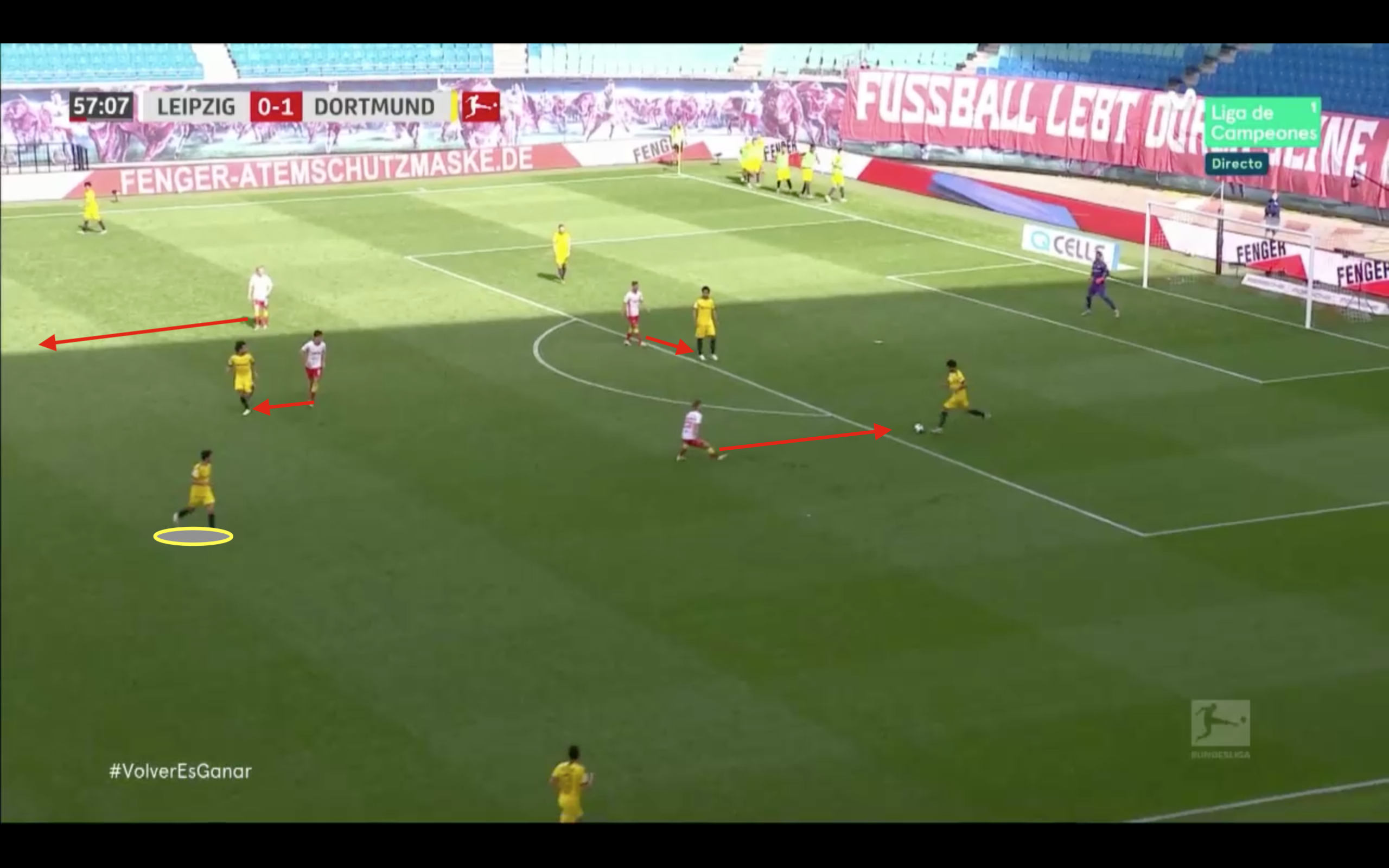 The change to a 4-2-3-1 helped neutralise the midfield of Dortmund’s as the likes of Witsel, Brandt and Reyna found it more difficult to get onto the ball, as shown above. Continuing the theme of pressing, each Leipzig player is now on a Dortmund player. Werner is occupying Hummels to nullify his passing threat and the attacking trident for Leipzig are each marking Dortmund’s midfield trio, with Forsberg wary of Brandt who is off-screen. Olmo is pressing Can, who is in possession, but has Reyna in his cover shadow making the pass to the American much more difficult. Even the wing-back is occupied by Leipzig’s wing back, thus forcing Can to go long.

Another way in which the formation change helped was that Leipzig had a numerical advantage in midfield. The double pivots and three attacking midfielders tried to force a small pentagon in the middle of the park to reduce Dortmund midfielders’ link-up play. This strategy worked well but was not needed for the majority of the second half given that Dortmund rarely had possession. In the situation above, Dortmund were able to win a free-kick following the pass due to a soft foul called on Upamecano but the change in formation helped Leipzig recycle possession better and also reduce the effectiveness of Dortmund’s midfield.

Given Leipzig’s tactical switches in the second half, Dortmund had to react accordingly. As they were unable to keep possession as well as they did in the opening 45 minutes, their attack in transition had to be great to create goalscoring opportunities. The main way in which Dortmund were able to do that was by using late runners effectively. This is normally difficult for Dortmund given that Haaland is the only great runner in behind but against Leipzig that was not necessarily needed. 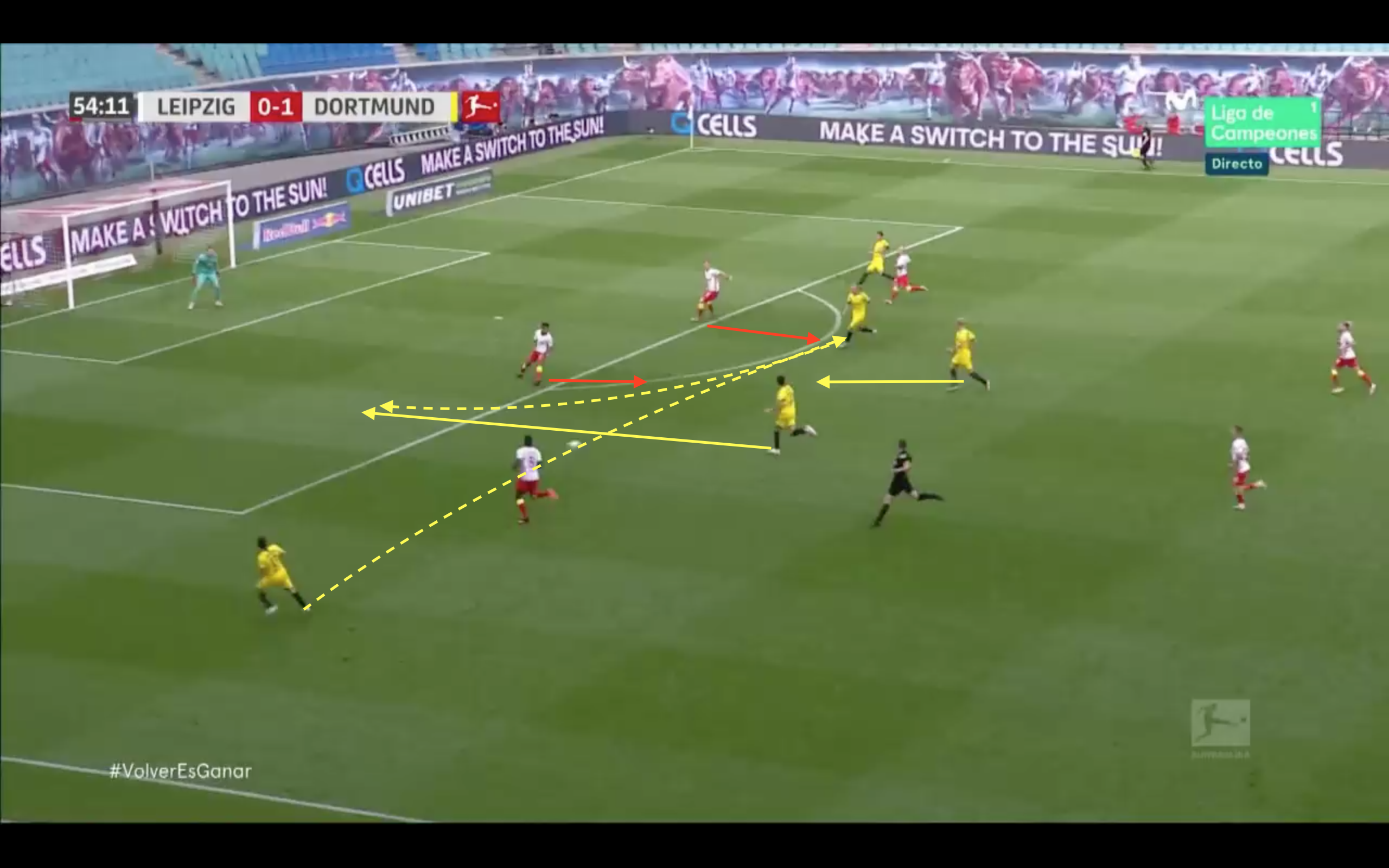 Above, is a perfect example of Dortmund’s use of the late runner but this is in the final third of a counter-attacking move. Guerreiro plays a pass into Haaland’s feet who receives the ball with two late runners in Brandt and Reyna. Leipzig only have two centre-backs and one is already occupied with Haaland, leaving the other with Brandt given that he is the closer option. This leaves Reyna free to run into the box unmarked and Haaland is able to find him. Reyna’s touch eludes him and the chance goes missing otherwise the teenager would have been clean through on goal with only the keeper to beat. 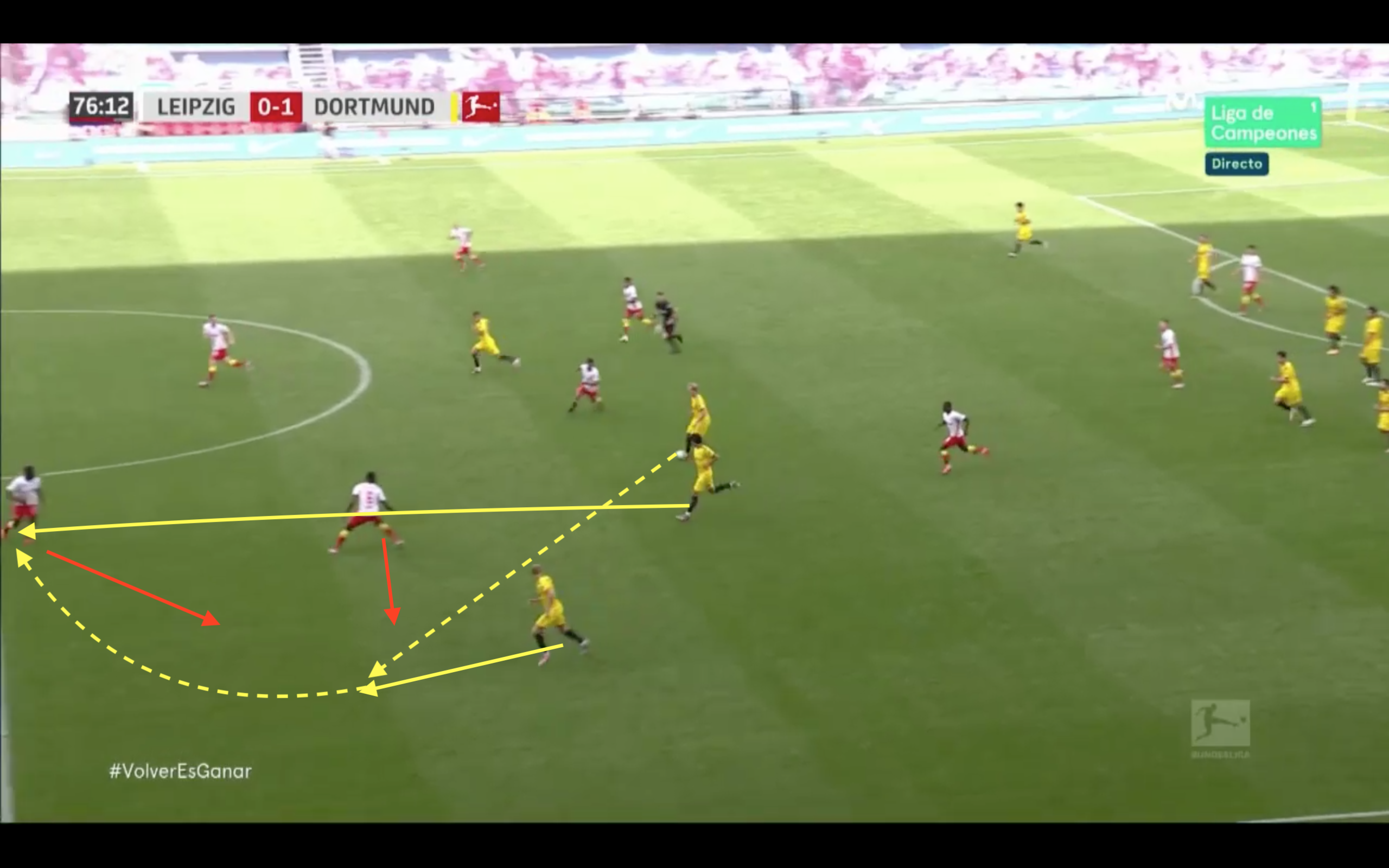 This move did not only apply in the final third as the example above shows this happening earlier in transition. This time Brandt plays a pass into Haaland, who expertly slows down when receiving the ball. This draws both Leipzig defenders to him as Konaté, the defender on the same plane as Haaland, does not realise that Upamecano is looking to close Haaland. With both defenders closing the teenager, Can is free to sprint into space in behind yet the pass from the striker is overhit and Dortmund once again fumble a good opportunity.

In a half that gave Dortmund few opportunities, these runs were crucial for their attack and they had made them work brilliantly. The final actions were lacking and thus meant that Favre’s side were unable to put the game beyond doubt.

Dortmund had to wait until the last kick of the game to get the second goal but despite suffering a lot in the second half, Favre’s team were able to hold on with a solid performance. It was a good tactical war between two of the best coaches in the league and both teams had good chances as shown by the xG being 1.69 to 2.92 in Dortmund’s favour.

Die Schwarzgelben welcome Hoffenheim to the Signal Iduna Park and Leipzig go away to 15th placed Augsburg in what will be the final gameweek of the Bundesliga season.