Armando Broja is a 19-year-old forward at Chelsea, who is expected to push to feature in the first-team this season. After a breakout season with Vitesse Arnhem in the Netherlands (Broja scored 11 goals and made three assists in all competitions), it has been made clear that Thomas Tuchel will be monitoring the forward over pre-season training, as Broja joins up with the first-team in Cobham. Broja was born in Slough and has come through the Chelsea Academy, however, he represents Albania at international level, just as he did through youth level football too. This tactical analysis and scout report will look to give an overview of where Broja’s strengths lie, as well as an insight into how he could fit in with the Chelsea first team and their tactics.

He can play as a centre-forward or out wide as part of a front three. Broja’s flexibility to fulfil either role and do so at a high level would make him a prospect worth pursuing with for Chelsea. The Blues have already let Olivier Giroud go to AC Milan and Tammy Abraham looks increasingly likely to be heading for the exit door too. This leaves Timo Werner as the only recognised number 9 in the squad, even if it appears Tuchel sees Kai Havertz as a number 9 as well.

Broja is comfortable dropping deep and offering an option during build-up play. He makes late runs into the kinds of areas shown in the following image, from where he can receive line-breaking passes. At 6’1” he has decent height, and he has a strong, but lean build to go with this, which allows him to be an effective target man in these instances. 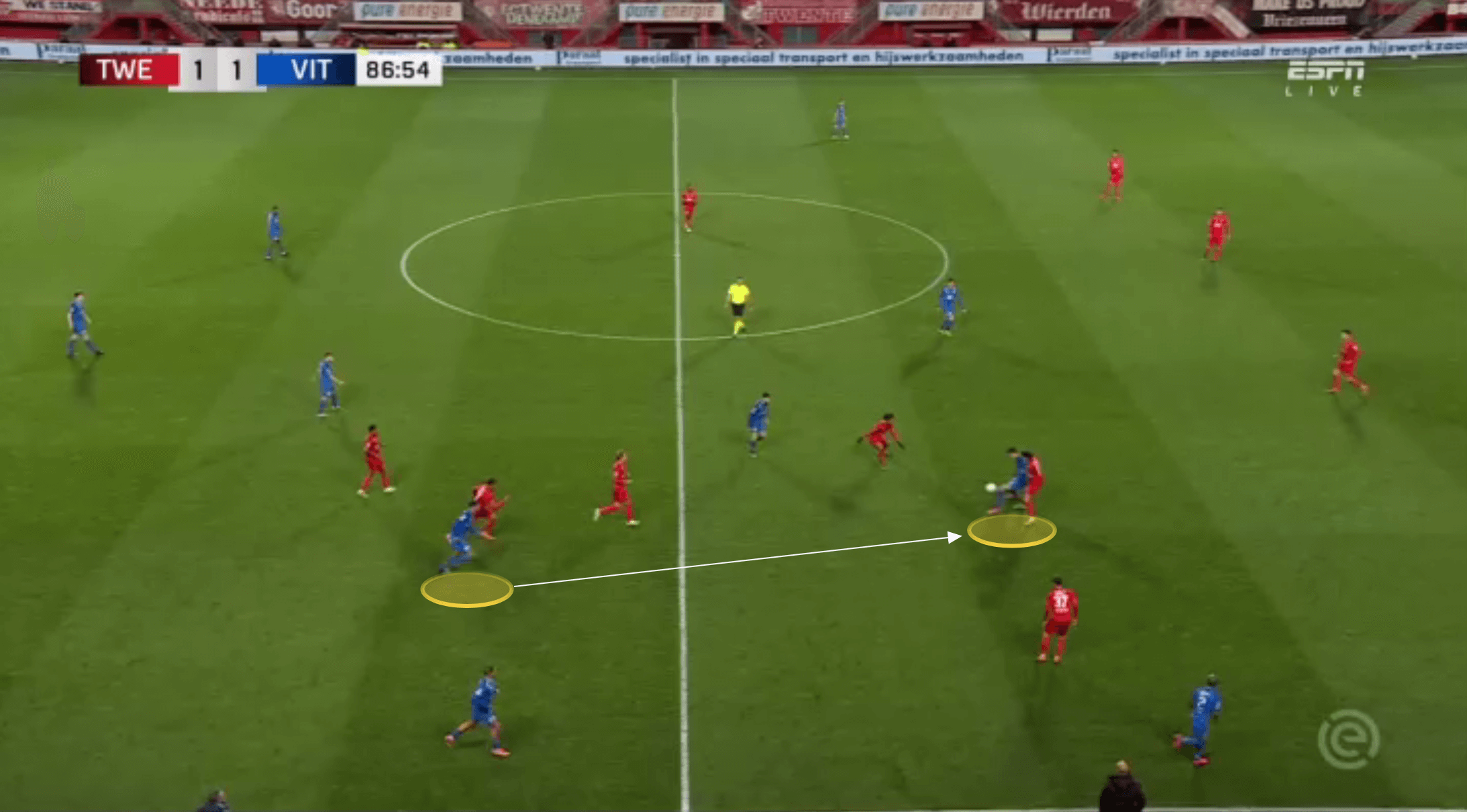 Broja is comfortable playing off of limited touches, however, in other moments he gives the impression of not feeling rushed to pass on the ball. This isn’t to the detriment of the team though, instead he shows an understanding of when it is the right moment to hold onto possession and allow his teammates to push forward into nearby attacking spaces.

He will back into players, and sit low as he does this, making it difficult to push him off the ball. Should he be drawn into a physical tussle or perhaps face a defensive overload, Broja does well to force enough contact whereby he can win a foul.

He shows a calmness in possession, even when heavily surrounded by opposition defenders. His first touch keeps the ball close when surrounded, and his second takes him away from the pressure. 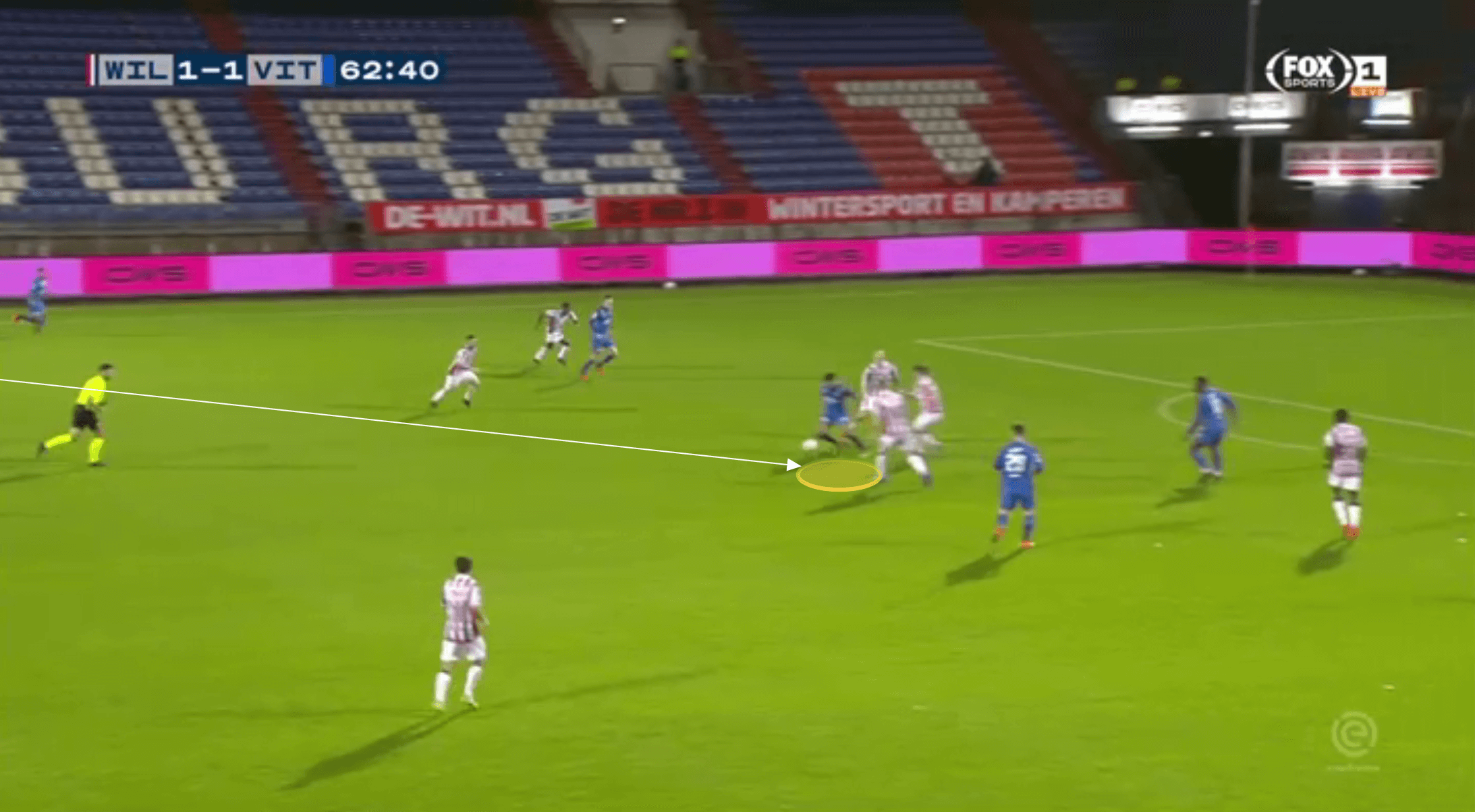 As he engages other defenders, he shows a poise in possession and a speed of play which suggests clear understanding of what he wants to do with the ball before he receives it. In the previous image, and the following one, Broja is surrounded by three players in subsequent moments. He successfully receives the ball, draws defenders out of the back line, and moves the ball on to a wide attacking teammate, allowing the attack to continue with space now created behind him. 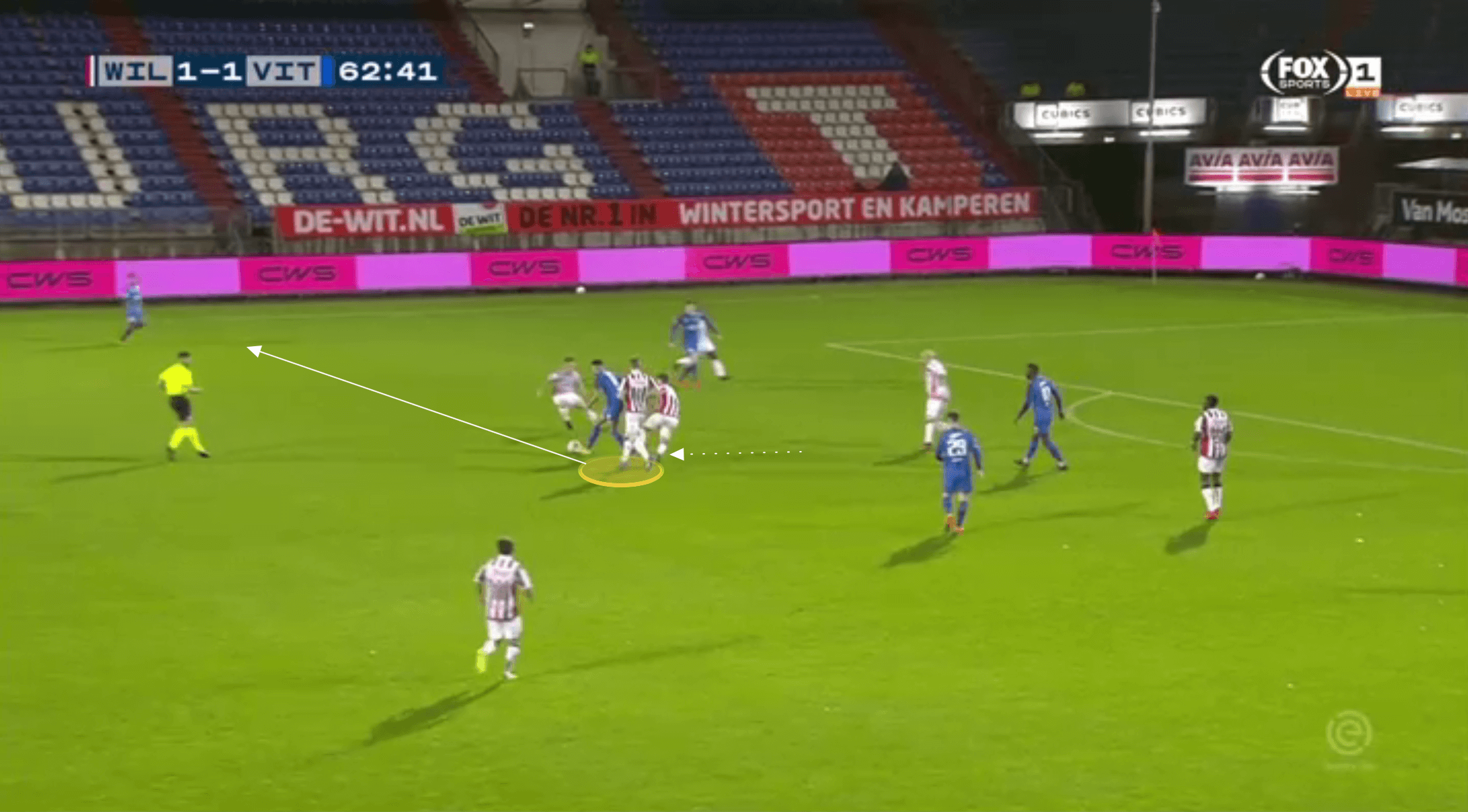 Broja will alternate his positioning based on where the ball is at that moment, or the stage of the attack. In deeper build-up play, he is likely to look to find space between the lines and in the half-spaces, and in more developed attacks he will occupy the centre-backs, however, on quick breaks, where there is space in behind, he looks to peel away from the centre of the pitch. He drifts wider to isolate himself against one defender as he looks to be played into the space behind the defence. 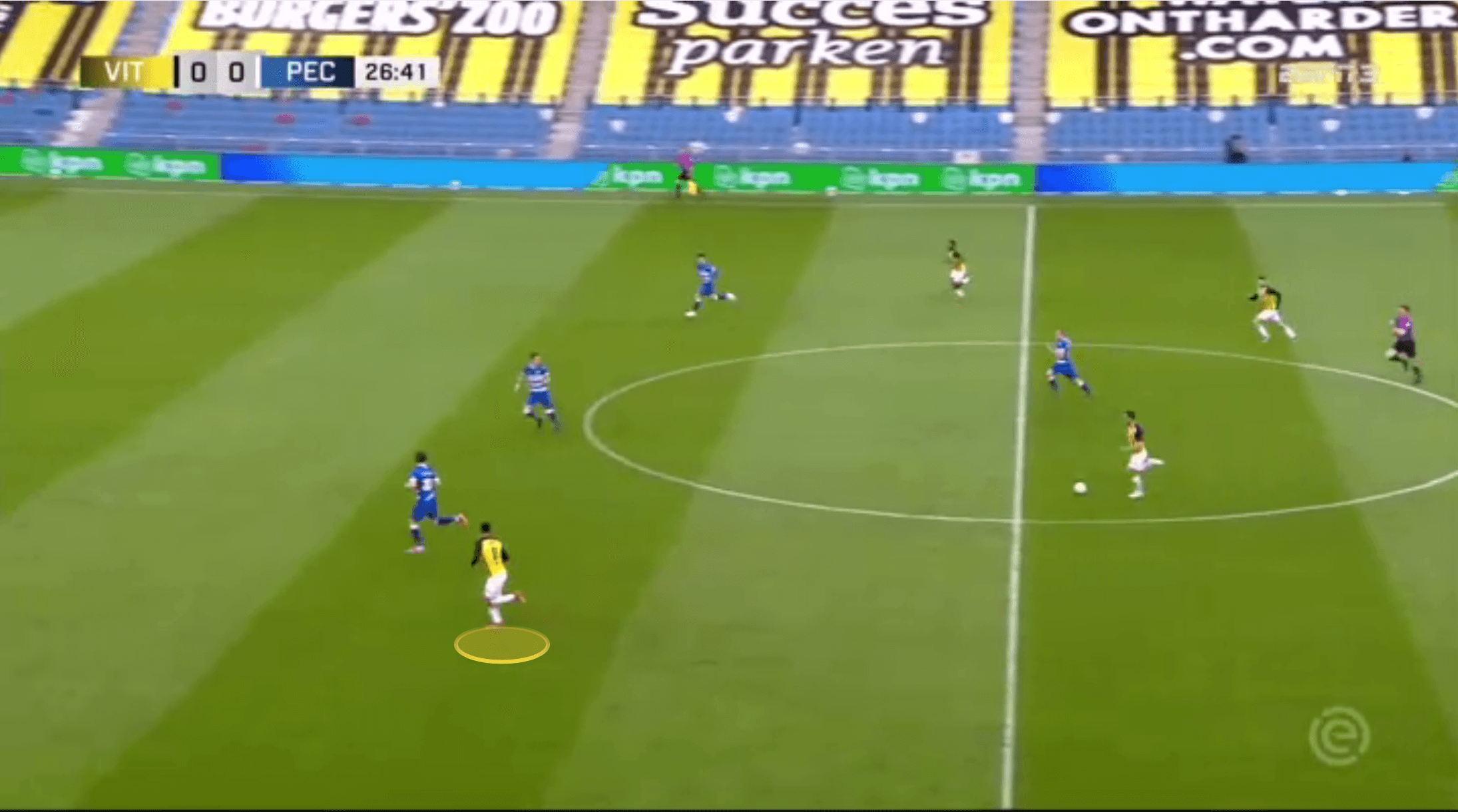 Broja’s timing of these runs is often pinpoint and he shows agility to make late adjustments if the through pass is delayed, ensuring that he still remains on-side even if he initially times his run a fraction early. 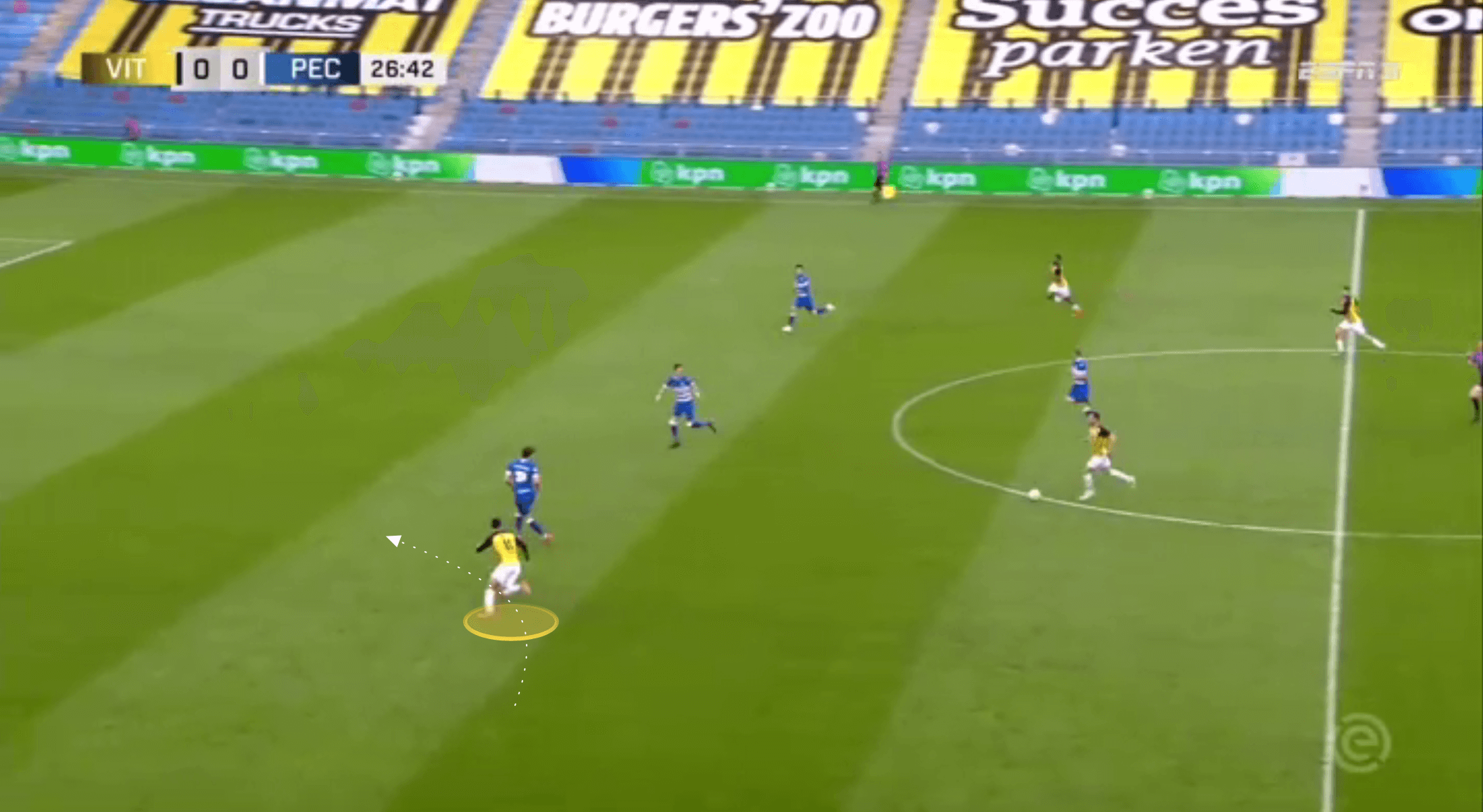 Broja is talented as both a goalscorer and a creator. Firstly, with his work in front of goal as a scorer, there are some clear tendencies that arise.

Broja is an outstanding finisher, but he isn’t a poacher, instead looking to receive the ball on the edge of the area, rather than in and around the six-yard box. Even as the ball is advanced on either wing, into areas where a winger may look to play the ball across goal, Broja would rather wait just inside the 18-yard-box and look to receive a pull back cross from this distance. We can see the area referred to in the subsequent image. 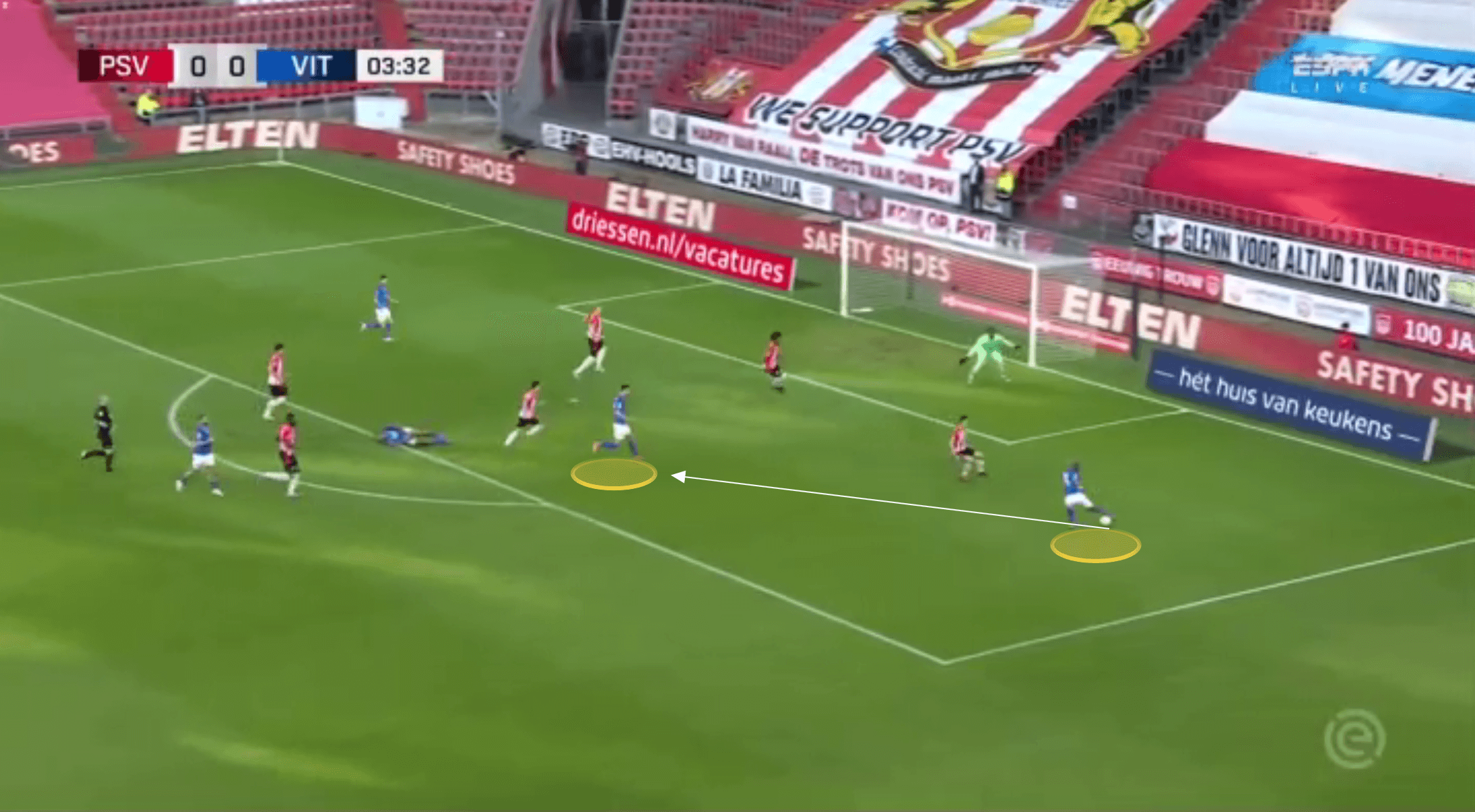 As for his goals scored last season, we can see by looking at the following shot map from the 2020/21 season, that the majority of Broja’s goals come from this area too, with a clear preference for taking on shots from this kind of range. 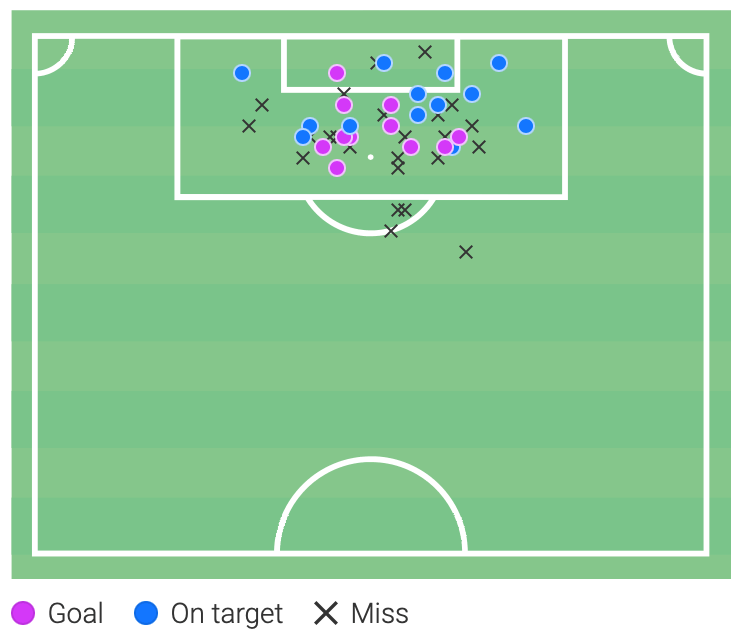 Whilst he only took 1.88 shots per 90 last season, he was hitting the target with 50% of these attempts. On top of this he was averaging 4.27 touches in the box per 90, therefore getting a shot away from every 2.27 touches.

It should also be noted that Broja’s goals come using his right and left foot, but he is also a threat aerially too. Even from further out Broja displays excellent accuracy on his heading to direct the ball to the furthest corner. When looking to compete for a header inside the opposition box, Broja rarely darts away from a marker, rather drifting into slightly deeper areas where a defender senses less of a threat. If picked out in these areas he is a legitimate goal threat, however, if marked closely his impressive vertical leap and overall timing of his headers make him difficult to deal with in these instances.

On top of his ability in front of goal, Broja is a strong dribbler. Last season he registered 4.78 dribbles per 90 and had an impressive 43.4% completion on these attempts. Broja is confident taking on shots from different angles, but he will also use his dribbling to force a better shooting angle. Broja disguises his dribbling often looking to fein shooting on goal, before cutting inside. 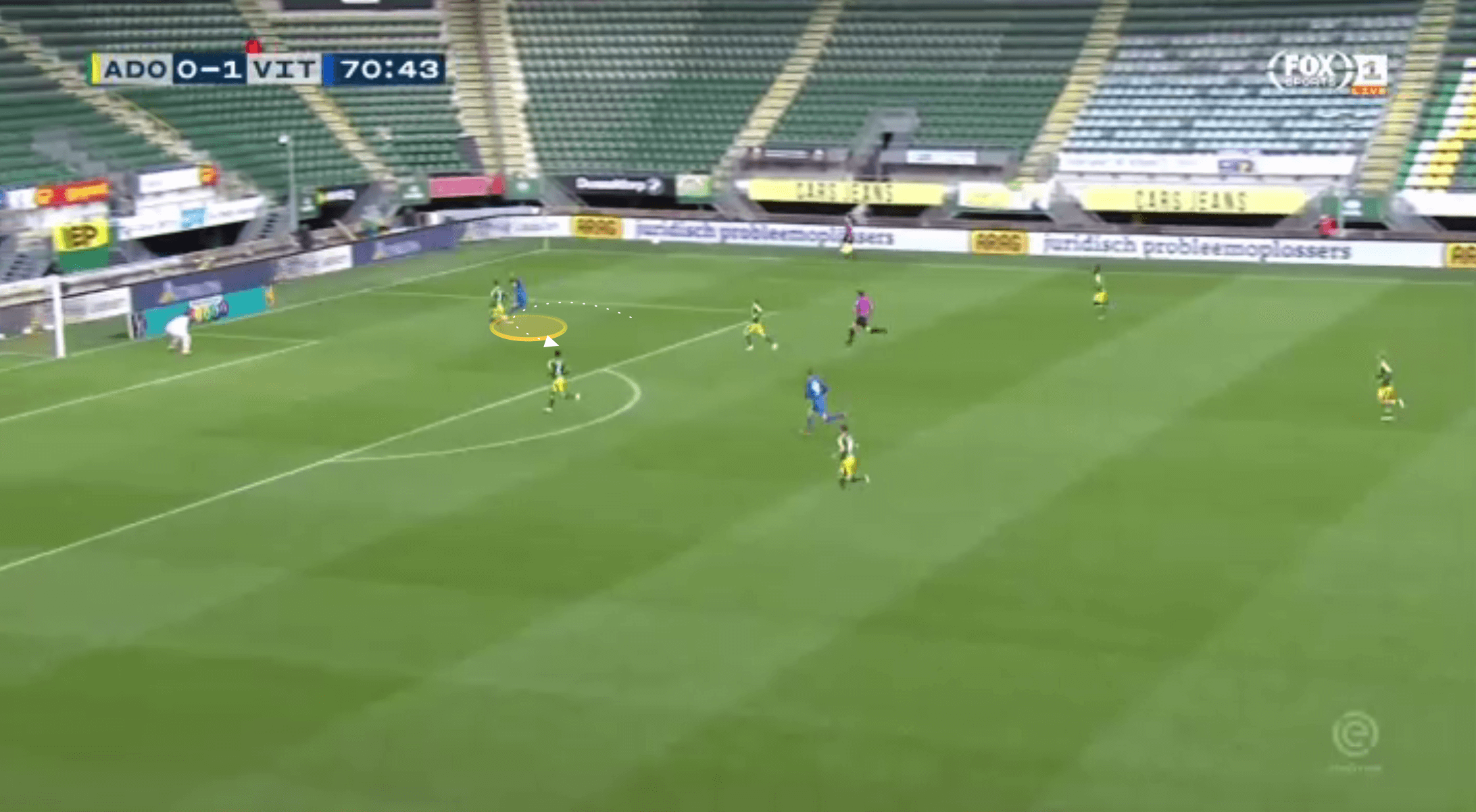 He shows an ability to make adjustments as he dribbles, reacting to any attempted tackles from onrushing defenders. From the same example shown in the previous image, we can see how he was then able to round a second defender, before getting the shot away from a tight angle with his left foot, and finishing at the front post.

Broja is unselfish in the final third too, and his three assists don’t fairly paint the picture of his creative ability. He shows awareness as he drives forward – even in goalscoring positions – to find nearby teammates who are arriving into the area. 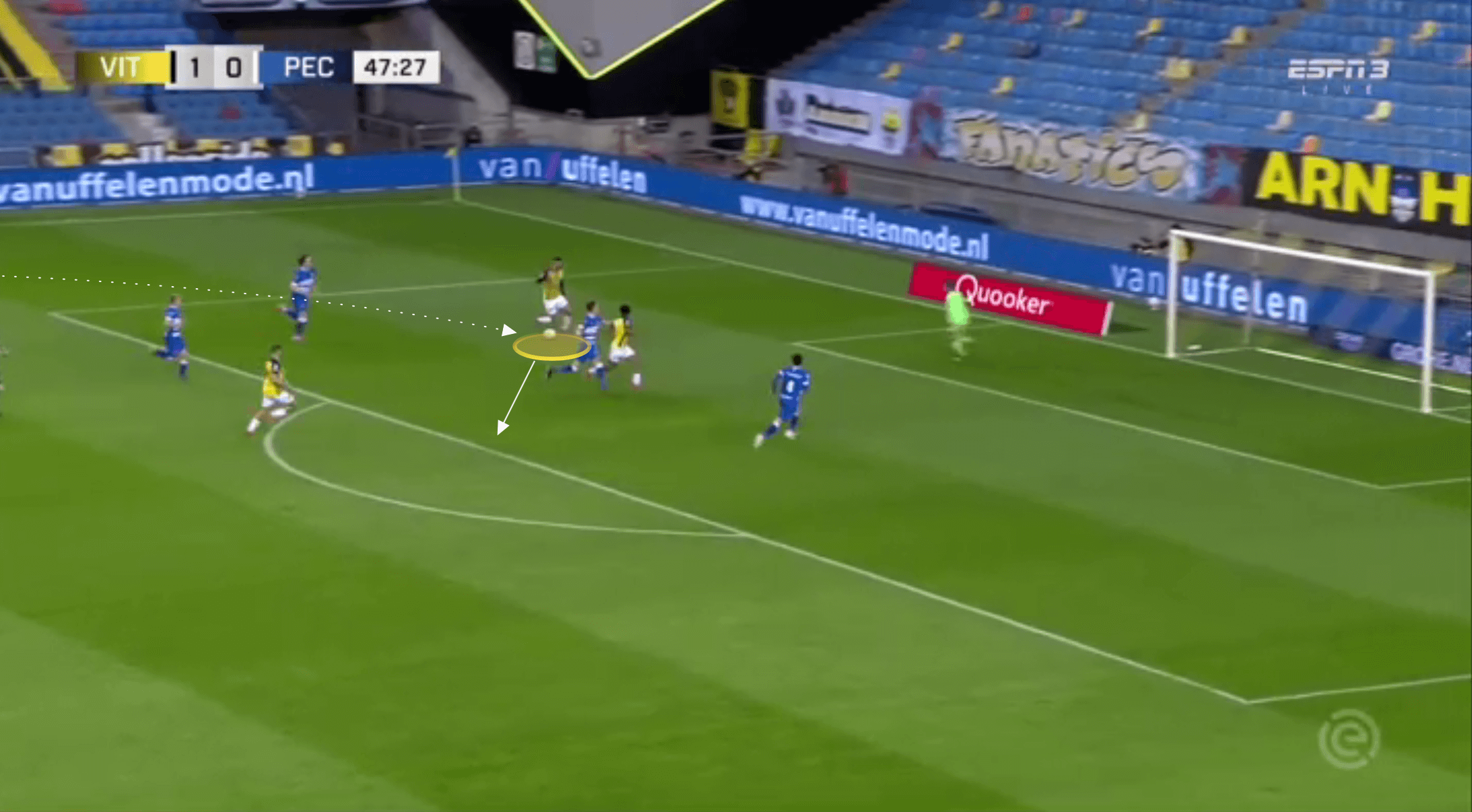 He will drive into areas where he can hit the ball across goal or look to cut the ball back to the edge of the area. Broja can turn hold up play into a dribbling opportunity in an instant. He can change direction quickly, rolling a defender marking him tightly, whilst he possesses a rapid change of pace over short distances. It is these qualities that allow him to receive the ball as he does in the following image and still work an attacking opportunity through his own dribbling. 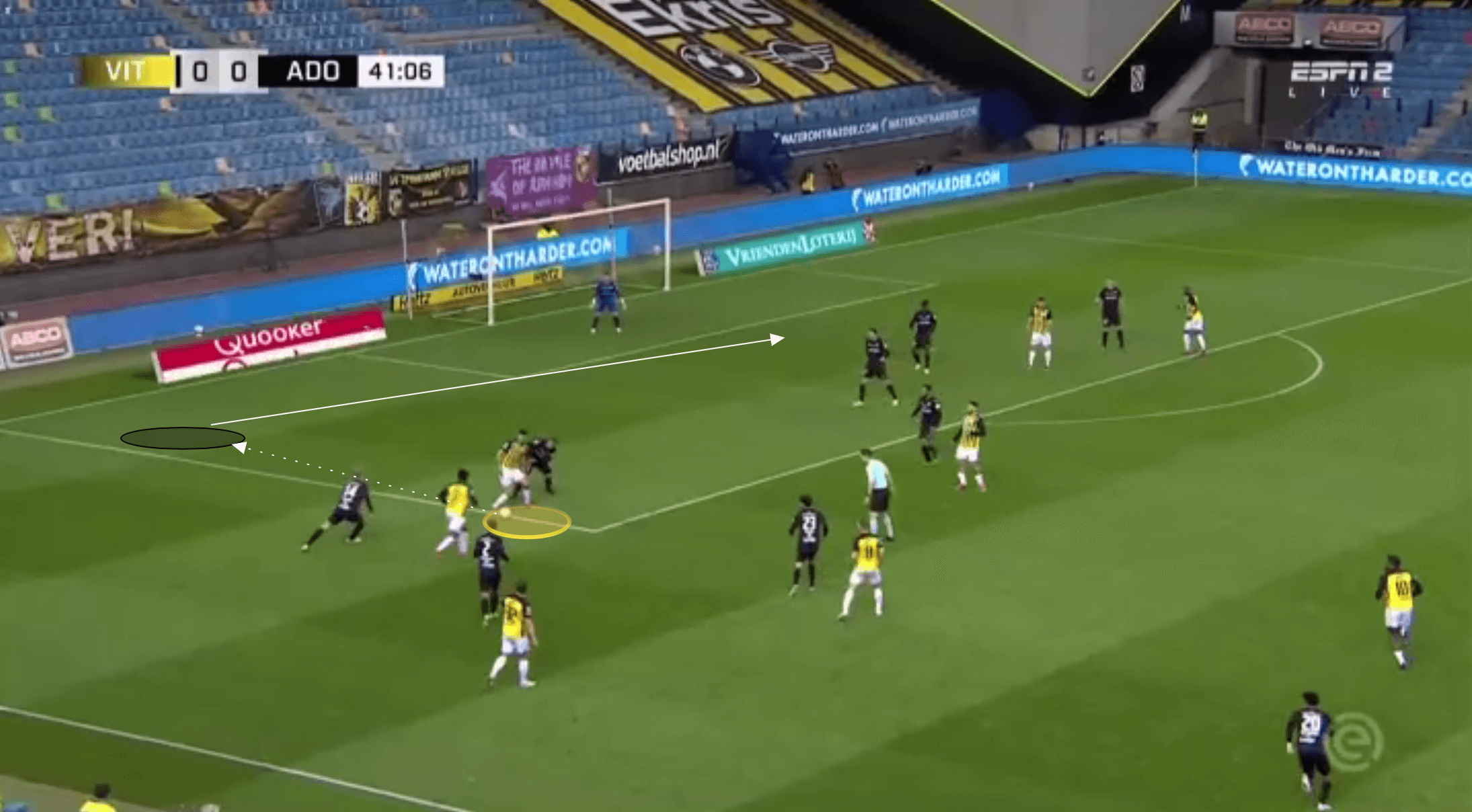 Broja doesn’t neglect this side of the game, and won a respectable 52.3% of his defensive duels last season. He can lead the line from a central position in the pressing phase, but is just as adept working as part of a pressing unit if he is played in a wider position.

When played centrally he has the work rate and energy to lead the line even if isolated by himself. We can see him cutting off the lateral pass option for the ball-carrier and closing the space, turning what should have been a simple 2v1 for the opponent into a pressured 1v1 situation. 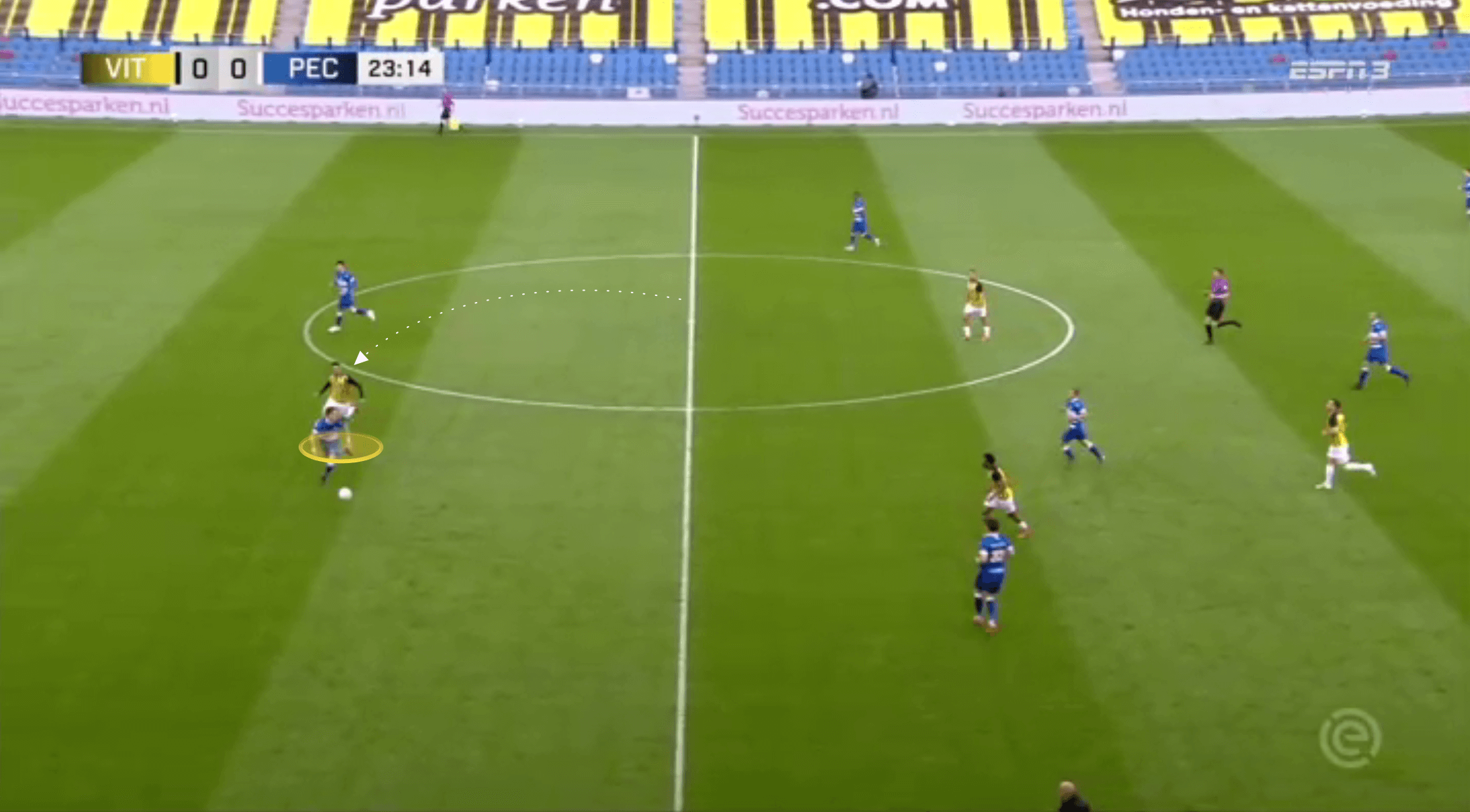 Cutting off passing lines with the angle of his press is a common theme with Broja. He has a good understanding of when to push forward though and times the angled press at the right moment where the ball-carrier has to take further touches than necessary in an attempt to find a different pass option. Broja’s pace means he can make this moment significantly uncomfortable for the ball-carrier, and if a goalkeeper is particularly committed to playing out from the back, Broja will force errors and turnovers as he continues to press forward like he does in the following image. 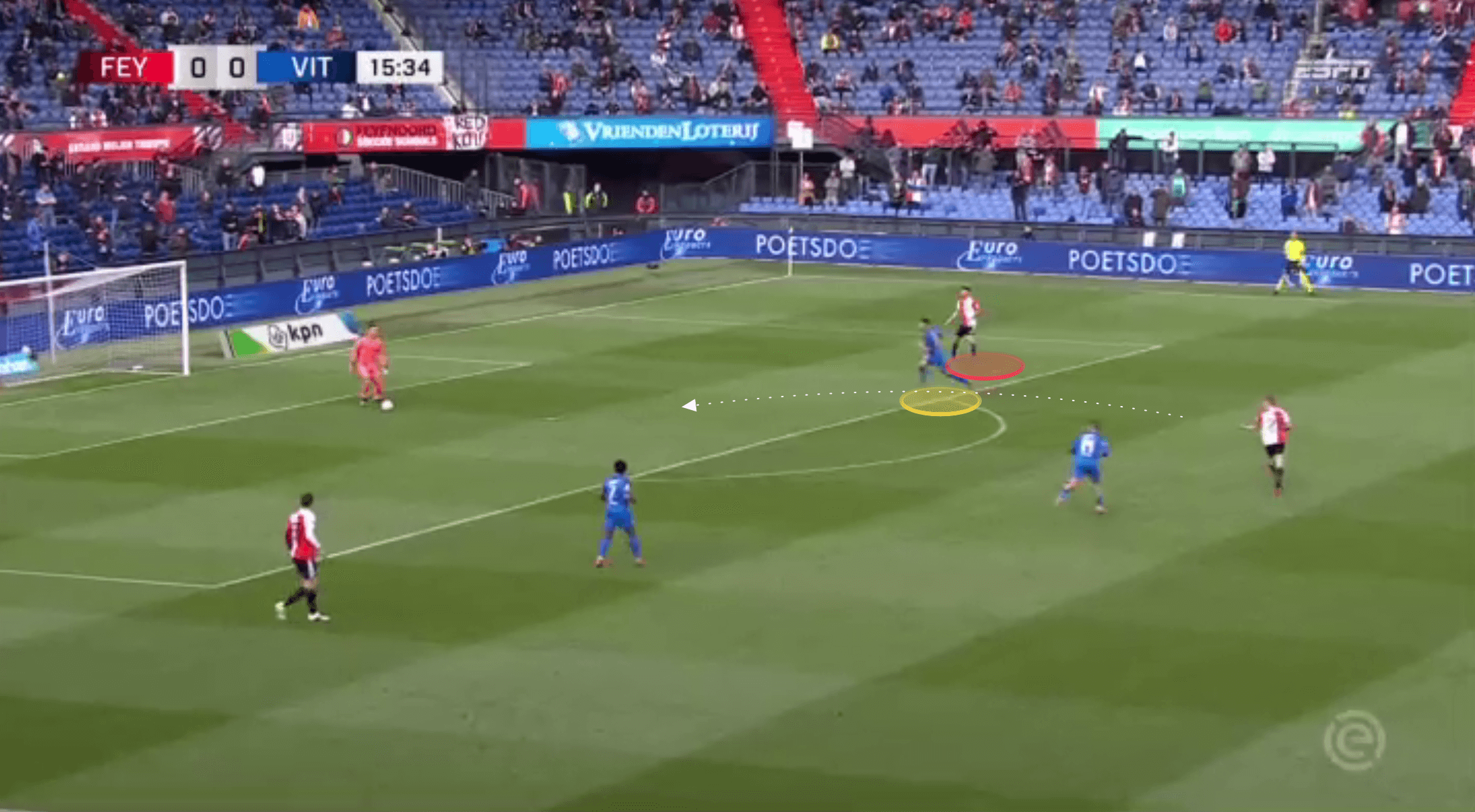 Broja is persistent when pressing and will continue to press the ball even as the ball-carrier moves it away. He covers short distances very quickly, and ensures he keeps the previous ball-carrier in his cover shadow as he continues to press to ensure the new ball-carrier doesn’t have an easy way out of the press. 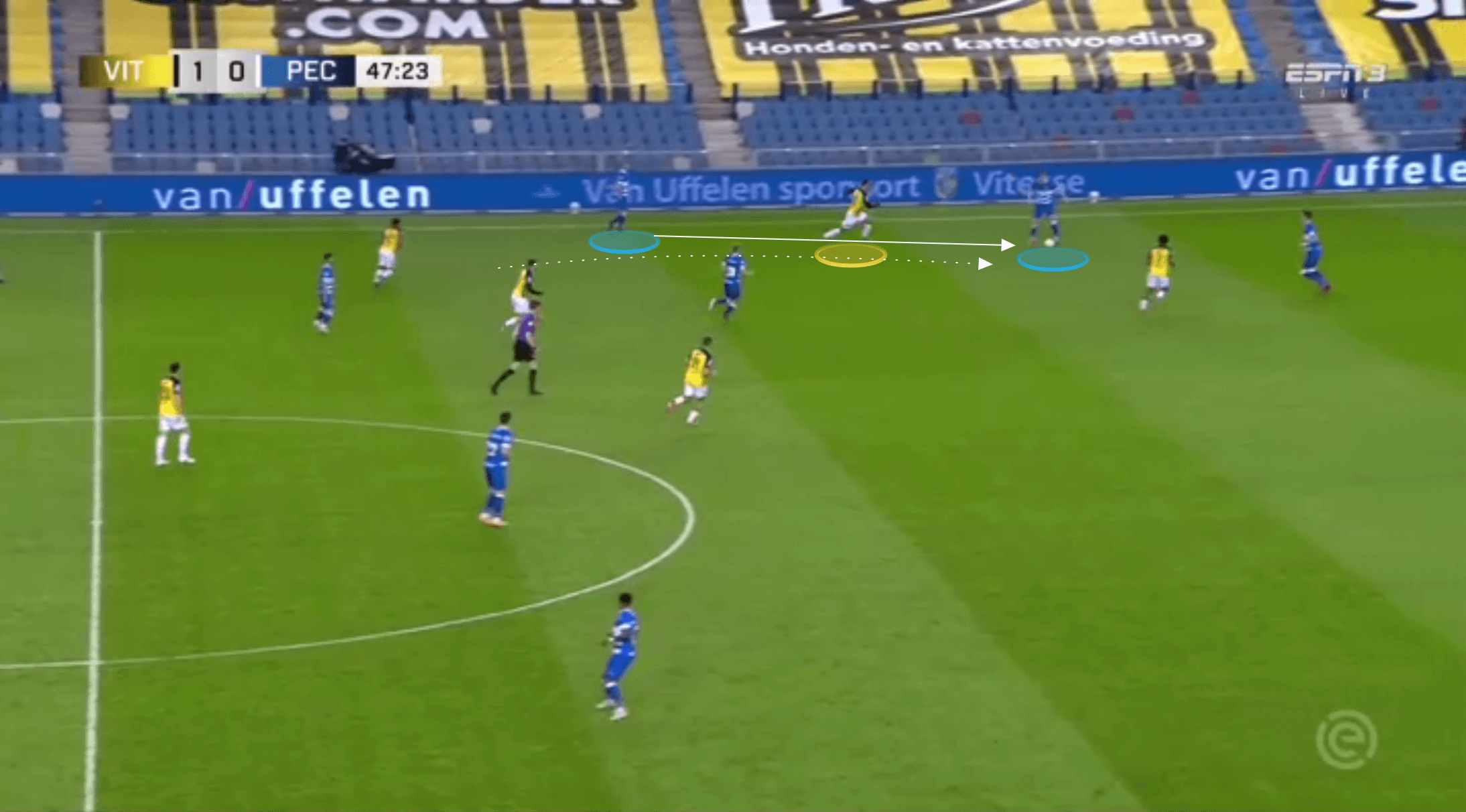 With his height and good standing jump, Broja is firstly an excellent outlet for direct passes forward. He competes well, and is a handful for any centre-back regardless of whether he wins the aerial duel. A large amount of his lost aerial duels will be in situations where he prevented the opposing centre-back from making a clean defensive header. He so often competes and causes the ball to drop into midfield areas.

This really sums up his overall competitive spirit. He is combative and competes for every ball. He has a terrific work rate and rushes and hassles the centre-backs all game when they are in possession. He is the sort of relentless player defenders won’t enjoy playing against, as this analysis has made clear.

Broja has an excellent burst of pace for a big man and is dangerous when he plays on the last man. He has the pace to cause opposition defences issues if they leave a high line and will look for balls in behind to do exactly this, whilst he holds the ball up well and brings his teammates into the game should they play with a deeper line. This makes him an already well-rounded prospect at such a young age.

At the same time, he is comfortable receiving the ball to feet away from the front line, turning, and driving at the opponent. He does this relatively frequently. He drives forward with pace and progresses the ball well when he does so.

Kenneth Taylor: Is he Netherland’s next great midfielder?

Ajax wouldn’t be Ajax, if not for how well their academy is set up. It wouldn’t be possible for the […]