At the start of the season 2020/2021, Ilya Zabarnyi was an unknown player in Europe who didn’t play a minute in a senior competitive match, but now he is well-known around Europe and labelled as a wonderkid. He was a starter for both Dynamo Kyiv and Ukraine which tells us a lot about how much he impressed in his first senior matches. Zabarnyi played all six matches (full minutes) in the group stage of the Champions League and also three qualifying matches. He managed to collect 13 caps since October and he was a vital part of the Ukrainian starting XI in the EURO 2020. Zabarnyi’s idol is Liverpool star Virgil van Dijk and he dreams to play alongside him.

Through this scout report, we will try to describe Zabarnyi’s abilities and highlight his strengths and weaknesses. This tactical analysis will help us to see why this youngster made such fast development in a short amount of time becoming one of the most wanted defenders in the game. Chelsea showed interest in him before the EURO 2020 and seems like they contacted Dynamo Kyiv for negotiations.

Ilya Zabarnyi is an 18-year-old centre-back. Transfermarkt values him at 11 million euros and his price growth was rapid since October 2020 when he was valued at 50 thousand euros. Zabarnyi is 189cm tall and he is right-footed. 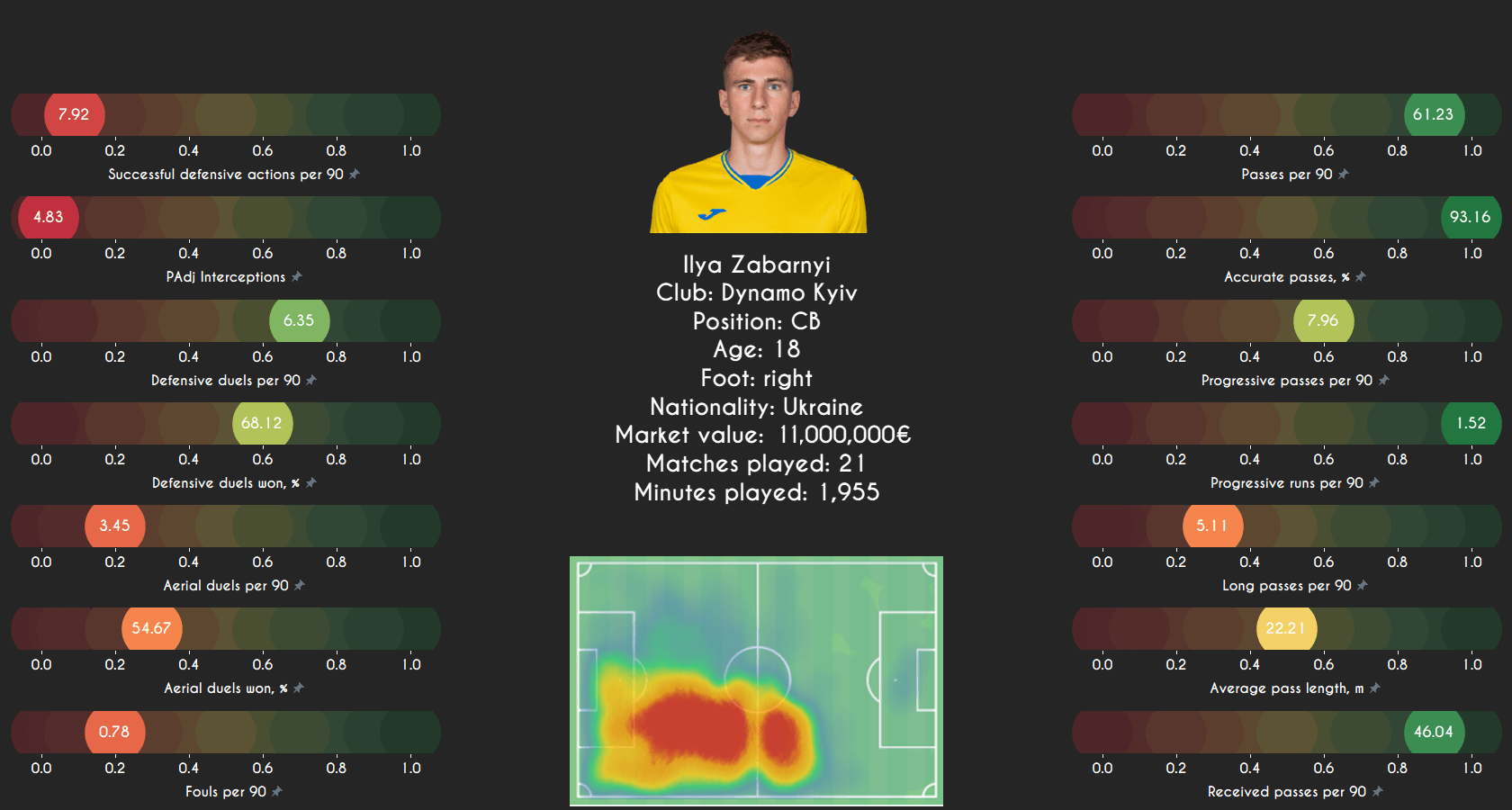 In this image, we can see how Zabarnyi looks compared to centre-backs from Ukrainian Premier Liga, who have played at least 500 minutes this season. His heatmap indicates that Dynamo Kyiv was dominant most of the matches given his high positioning. Based on data it is clear that he didn’t have a lot of defensive work since he is one of the players who had the least amount of successful defensive actions, interceptions and aerial duels (all per 90). However, he had an above-average number of defensive duels and he was pretty successful with a 68.12% success rate. He didn’t make many fouls which is praiseworthy for such a young player. His game on the ball and passing ability is what separates Zabarnyi from the others. We can see that he had a lot of passes per 90 (61.23) and he is the most accurate passer amongst the centre-backs in the Ukrainian Premier Liga with 93.16% passing accuracy. Zabarnyi also makes a good amount of progressive actions with 7.96 progressive passes per 90 and 1.52 progressive runs per 90 which, again is the top output for centre-back. This season he has played mostly as a right-sided centre-back in a 4-2-3-1 formation. He has experience playing in the three-man defence as well, meaning he is adaptable to different systems and tactics.

Since Zabarnyi is the centre-back we will start with evaluating his defending ability. The first example will be his reading of the game. 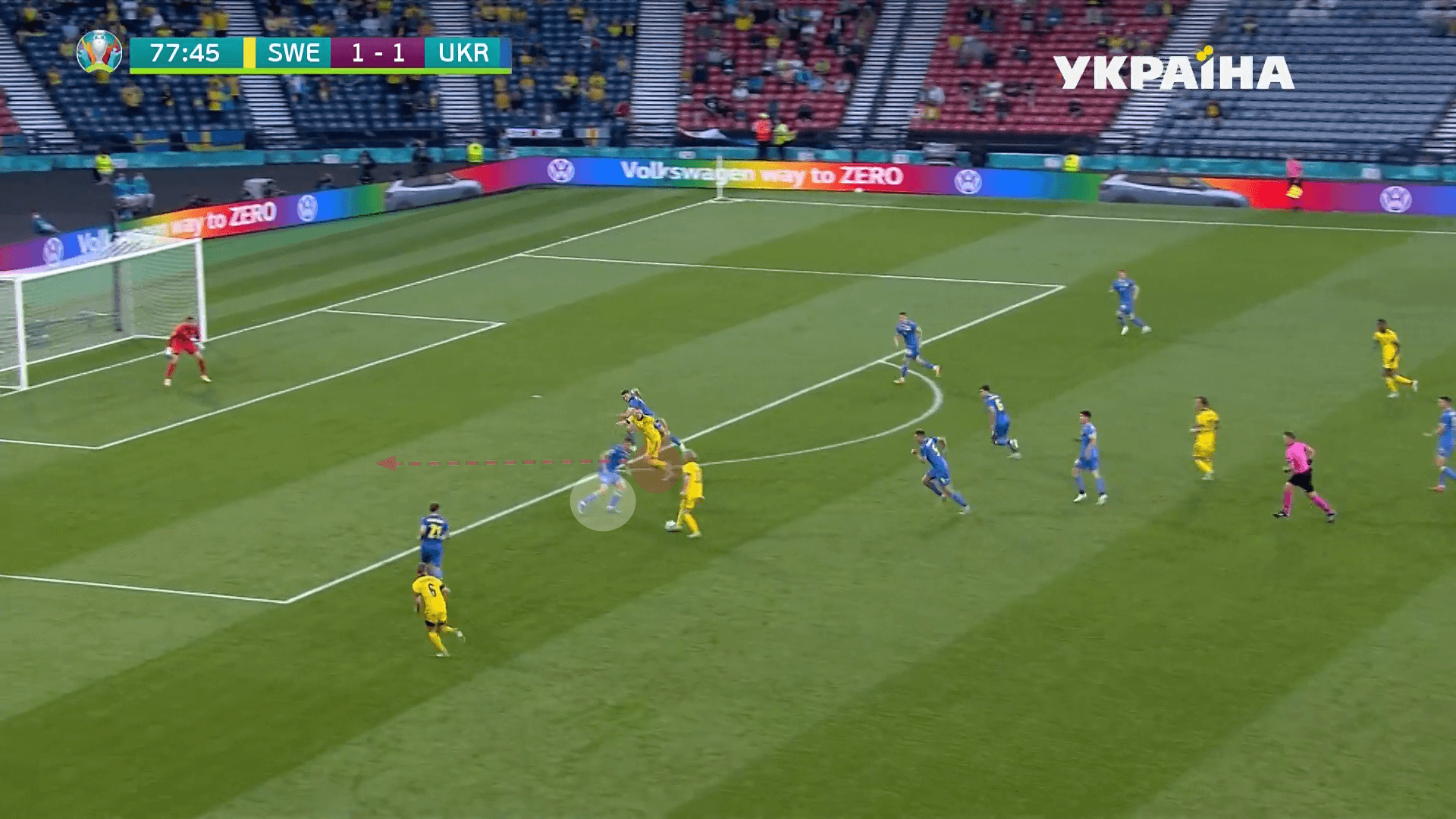 The above image is an example from a match against Sweden. In that match, he played in a three-man defence as right centre-back. Zabarnyi stepped out from the line to close down Emil Forsberg who saw a run from Dejan Kuluševski in behind. Zabarnyi positioned himself well to protect space behind him and intercept the pass towards the Kuluševski. It is very important about his ability is that he doesn’t engage too much in similar situations which could endanger his team if he gets beaten, but rather reads the game and positions himself well.

In the example below, we can see another good example of his quality reading of the game and anticipation of opponents actions. As we can see Zabarnyi followed opposition forward Marko Arnautović(white arrow) who dropped deeper to receive the ball. At the moment when Arnautović is making the first touch Zabarnyi reads his next move and changes the direction of his run(black arrow). Zabarnyi intelligent movement is on point here because he didn’t engage too close to Arnautović which would be dangerous for his team and he read the situation well intercepting the Arnautović lay-off towards his teammate. This is high quality defending by Zabarnyi. 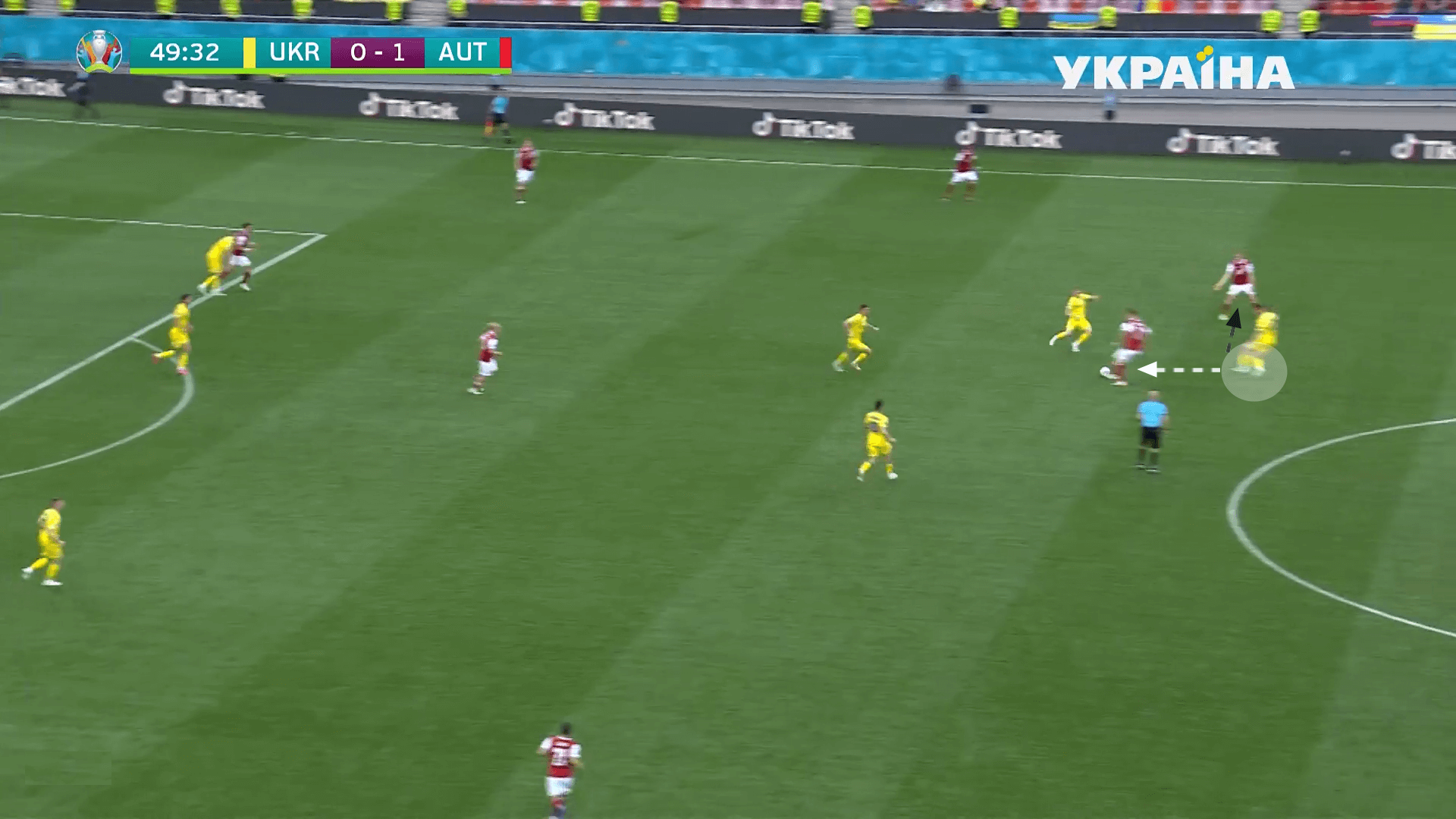 The next image shows how Zabarnyi makes proactive movement in order to prevent the opposition forward to receive the ball. He doesn’t come into the duel from behind to close the forward and let him receive the ball, but he accelerates to come laterally disabling the forward to shield the ball from him. It can be risky coming into the duel around the opponent if he manages to make the first touch, but if the movement to step out is timed rightly it mostly ends by intercepted ball. Zabarnyi managed to intercept the ball and it was hard for the opposition forward to prevent Zabarnyi from jumping out in front of him. These types of proactive movement are very important for defenders because that way forwards will have fewer opportunities to receive the ball and turn or go into 1v1 situations which decreases the number of work for defenders just by doing smart movements, which is exactly what Zabarnyi did. 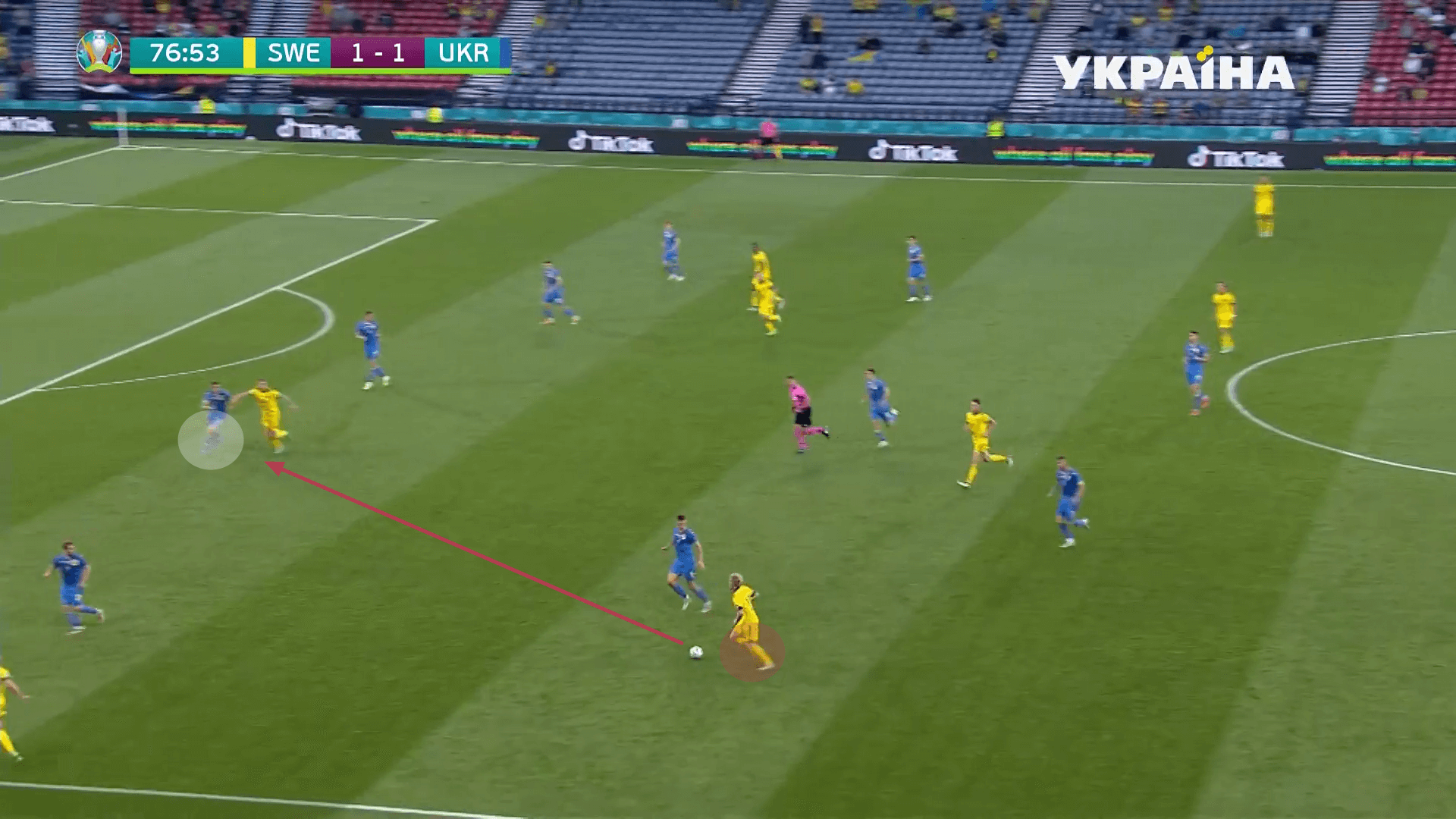 In the example below, we can see how Zabarnyi makes a covering run to close space behind the full-back. Right-back is oriented on the ball and marks an opposition winger who is making a run to attack the space behind him. Villarreal player Manu Trigueros (#14) makes a pass into the space behind the right-back and a moment before the pass Zabarnyi starts moving towards the open space(yellow area) to close down and prevent the opponent from getting the ball there. Because of the good reading of the game, Zabarnyi got first to the ball and avoided being 1v1 on wide space with an opposition winger. 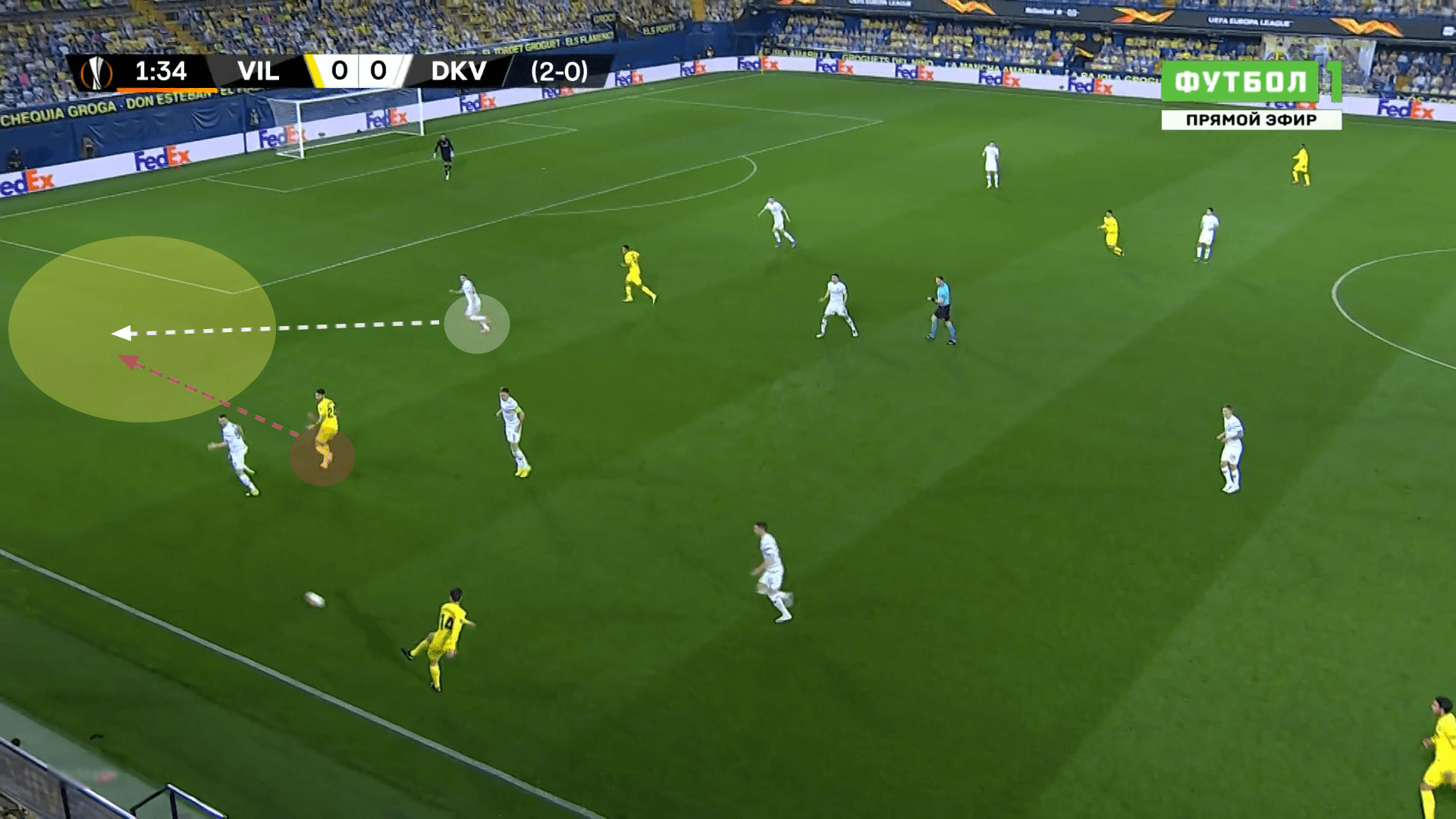 In this section, we evaluated Zabarnyi’s defending ability which is on a very good level. He is an intelligent central defender who positions himself well and moves proactively off the ball.

In this section, we will take a look at Ilya Zabarnyi’s passing ability. Given the fact that Dynamo Kyiv dominated in possession last season in the Ukrainian Premier Liga, he had plenty of passes and opportunities to develop his ball progression. In the example below, we will see one sequence from the match against the Netherlands where he showed good ball progression ability. 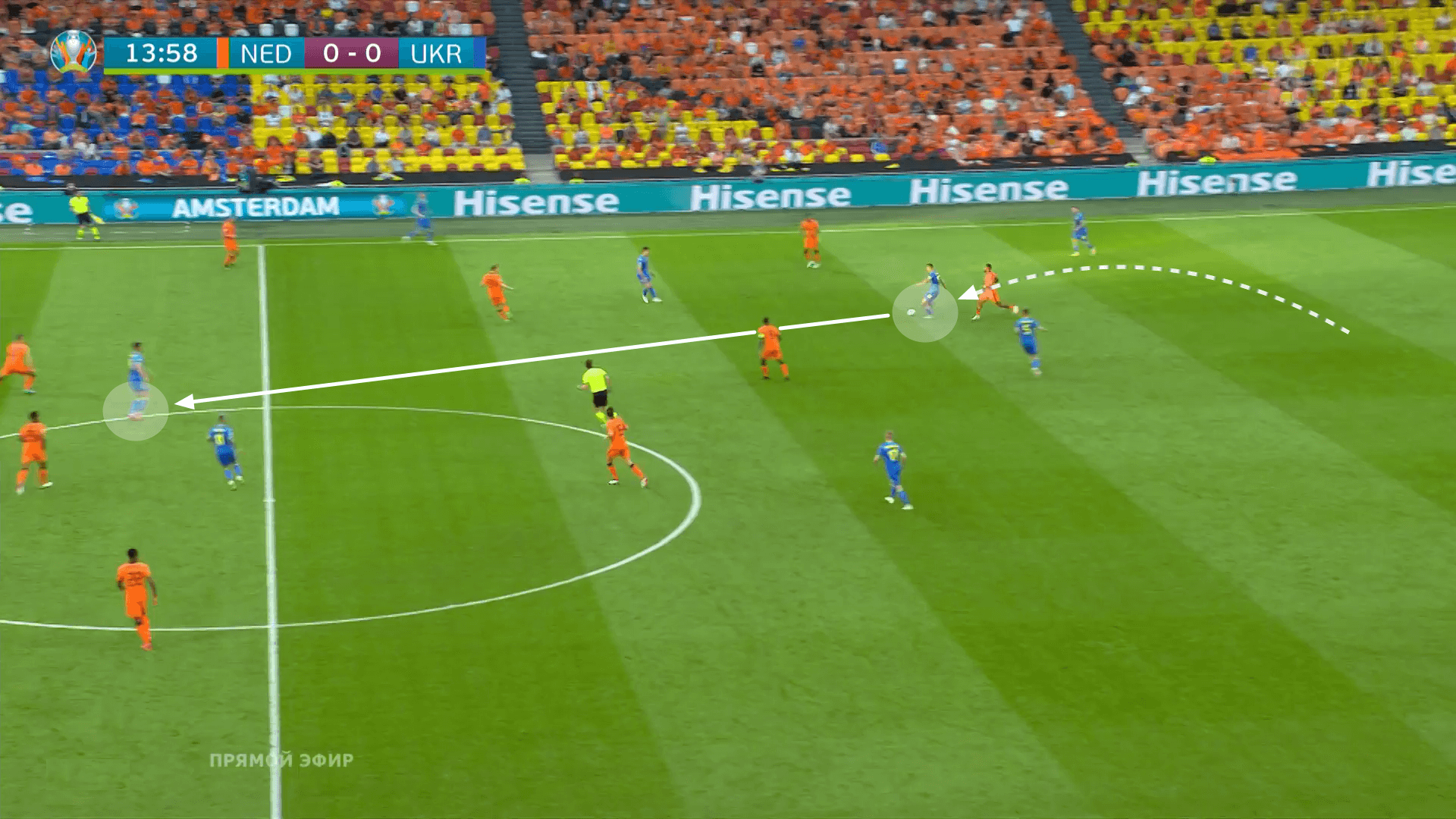 As we can see Zabarnyi made a penetrative pass towards Roman Yaremchuk who is in a good position to receive the ball in the opposition half. To create this situation for himself, Zabarnyi made a run towards the open space bypassing the Memphis Depay(closest Netherlands player) which opened the passing lane towards the Yaremchuk. Given the data we showed in the first section, he is one of the best progressive runners in the Ukrainian Premier Liga amongst the central defenders and how the time passes he will grow more confident and develop his ability to make progression both by running with the ball or passing the ball. 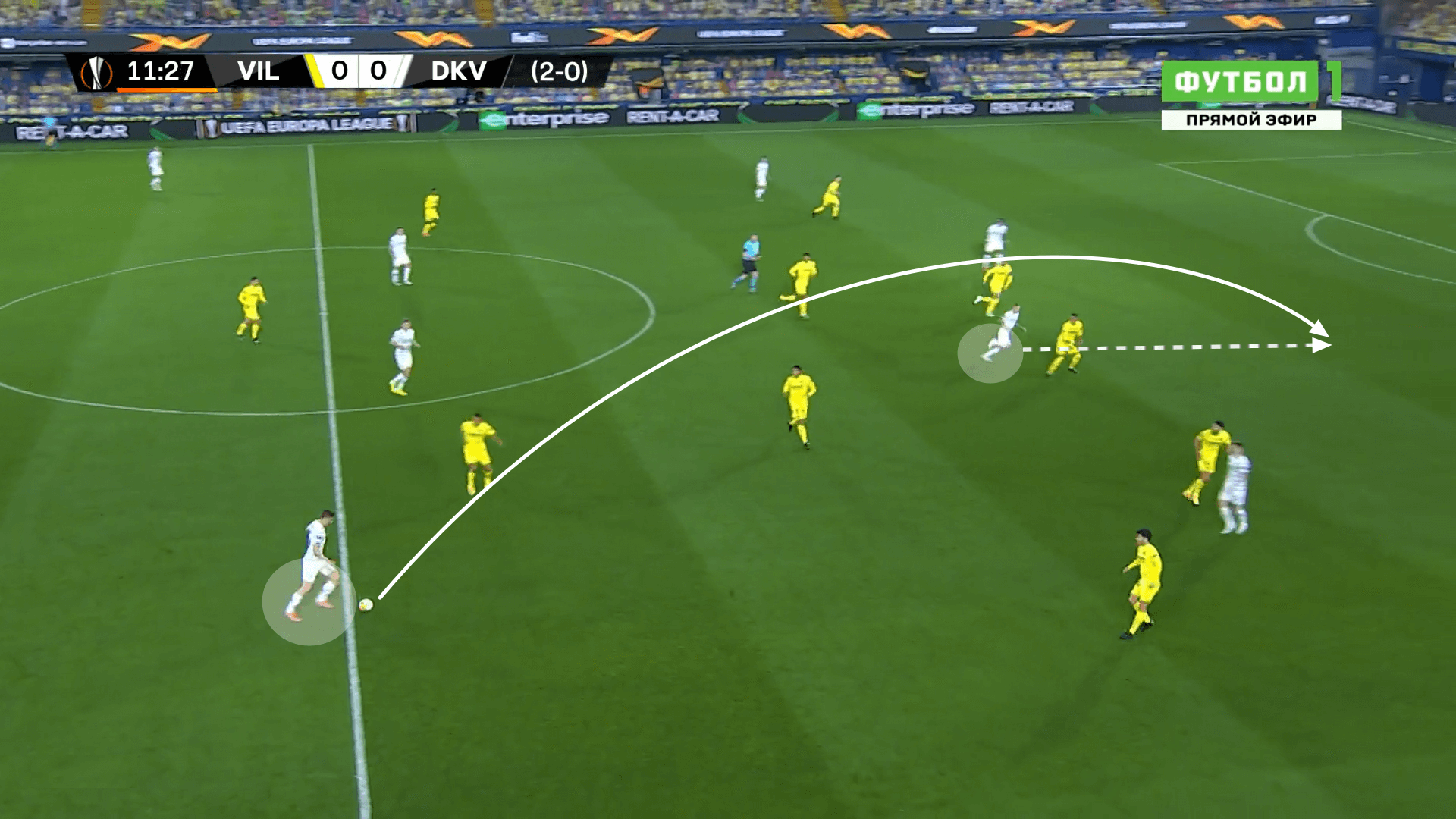 This example above shows us Zabarnyi’s ability to see runners in behind and his passing quality. In this situation, Zabarnyi is in possession of the ball and his teammate makes a run between the opposition centre-backs. Zabarnyi has the vision to see that kind of movement and also has enough confidence in his passing ability to attempt a pass over the defence into the open space. Timing is very important and Zabarnyi shows good eye-foot coordination to see his teammate and make a rightly timed pass into the open space. This is something which the football world starts to expect from centre-backs on the highest stage and Zabarnyi surely has the quality to make these kinds of actions. 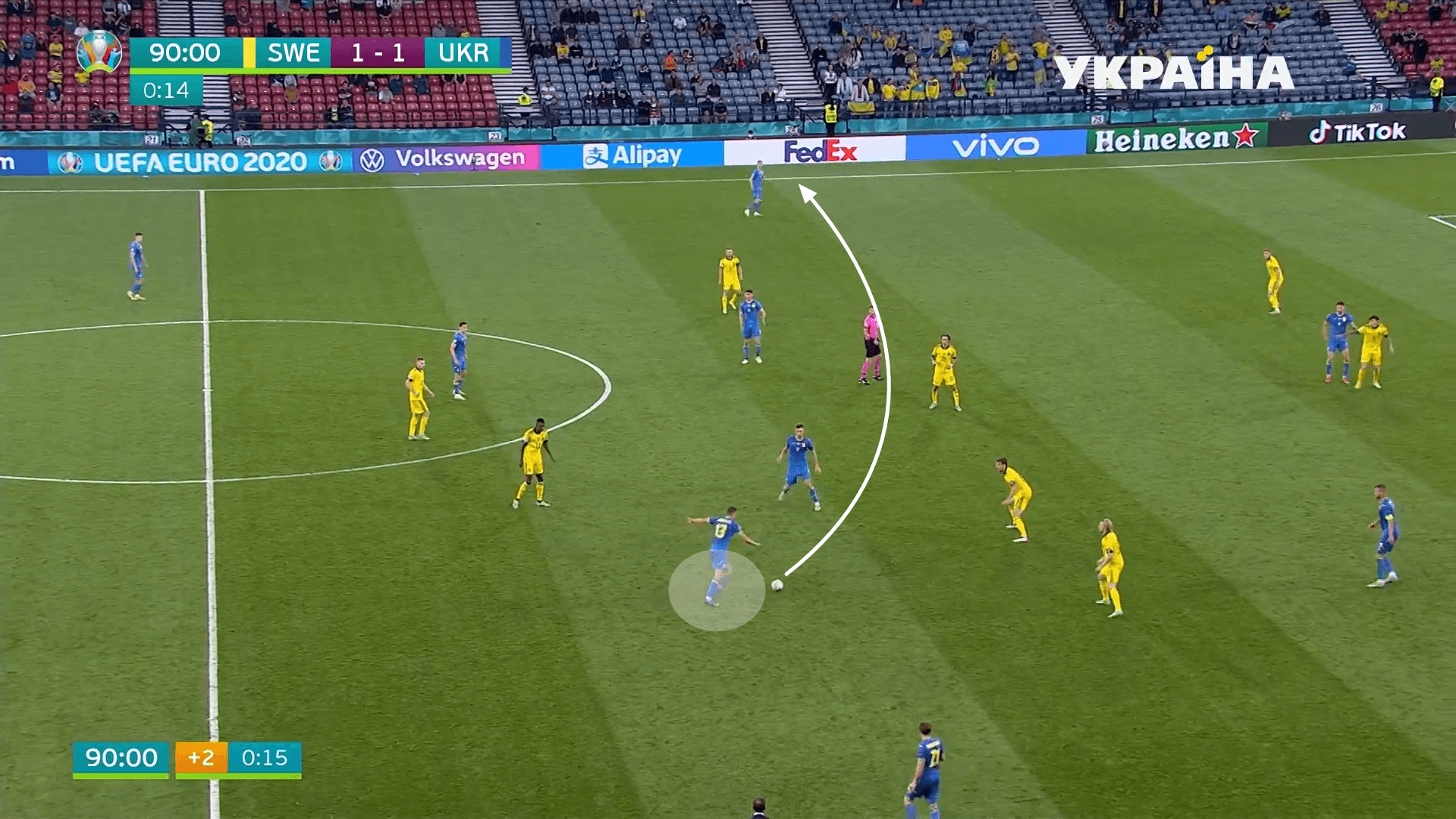 The last example in this section is a situation from the match against Sweden. When we talk about the centre-backs progressive ability it is very important to highlight his decision making. In this example, we can see that he got deep into the opposition half and he switch the play towards the left-side. The purpose of this example is that Zabarnyi didn’t force making a ground pass towards his teammates even though most of them could receive the ball, but neither of them is in a good situation to receive the ball because they would be under instant pressure from at least two opposition players and it could lead to an opposition counter-attack. Zabarnyi chooses to switch play towards the best option because Oleksandr Zinchenko has plenty of space in front of him and potential crossing opportunity.

It could be said that Zabarnyi is showing a good balance between safe passes and risky/progressive passes because of his good decision making and recognition of situations on the pitch.

About his weaknesses, we don’t have much to highlight, but if we had to we would mention his aerial ability. He has a tall frame, but his success rate in the aerial duels in the first image of this analysis showed us that he is below average compared to the centre-backs in the league. However, it is connected mostly to his adaptation to senior football where there are more forwards who are stronger and tougher in the air than what he faced before at the youth level. Zabarnyi makes such rapid progress and from playing against forwards at U18 level to playing against Lionel Messi, Cristiano Ronaldo, Antoine Griezmann at Champions League level in such a short time span and cope with them is really impressive. He has a lot of room to improve and to develop his style of defending against different types of forwards, but it was a massive debut season for him which

What we can conclude is that Zabarnyi looks like a potential top-class centre-back who will probably play on the highest stage in the next 10-15 years if his development goes this way.  It is not surprising that he got a chance that early for his country after just 7 matches at senior level and we have to praise Ukrainian legend and head coach Andriy Shevchenko for recognizing his potential and giving him a chance in the national team.