The Swedish Women’s national team faced the USWNT in the opening game of Tokyo’s 2020 summer Olympics and the game ended with a convincing 3-0 win for Sweden, a result that not many followers expected given the USWNT’s winning record in the last few years – especially during the last FIFA Women’s World Cup. Yet, Sweden did not give much attention to previous statistics and performed in an excellent way, marking this win in the history of Women’s football at the Olympics and in Sweden’s football history as well.

This tactical analysis will mainly tackle the USWNT’s defensive and attacking issues while exploring how were Sweden able to dominate the game, impose their playing style and score three goals without conceding any. The analysis will therefore include a mixture of mistakes to avoid and fix for the next games and on the other hand, tactical ideas, movements and performances to highlight.

Sweden started the game with the 4-2-3-1 formation with Hedvig Lindahl as a goalkeeper, Jonna Andersson, Nathalie Björn, Amanda Ilestedt and Bayern Munich’s Hanna Glas in defence, Caroline Seger and Filippa Angeldahl as central midfielders with Fridolina Rolfö, who has recently joined Barcelona, and Sofia Jakobsson as wingers and Real Madrid’s Kosovare Asllani as an advanced playmaker behind Stina Blackstenius, the team’s striker.

On the other side, the USWNT relied on the 4-3-3 formation using Alyssa Naeher as a goalkeeper, Kelley O’Hara, Manchester City’s Abby Dahlkemper, Becky Sauerbrunn and Crystal Dunn in defence, Lindsey Horan, Rose Lavelle and Sam Mewis as central midfielders while Tobin Heath and Christen Press played as wingers to support Alex Morgan upfront. 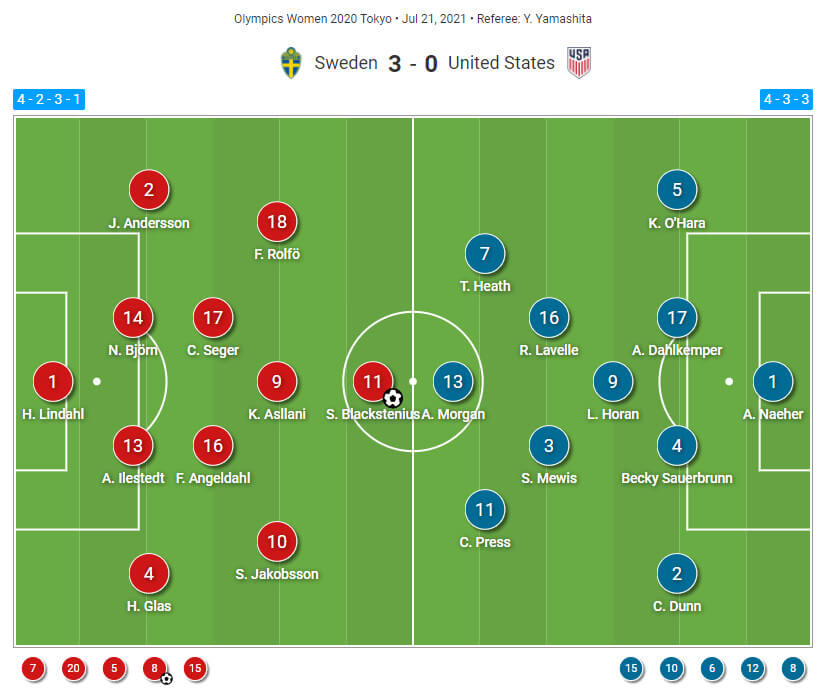 Peter Gerhardsson and his staff made sure that the players approached this game in a very determined way to not fall into the trap of the latest friendly game in which both teams drew after Sweden were unable to keep their advantage until the end. This friendly game gave the necessary boost for the Swedish players to believe more in their ability to beat the USWNT since they almost did it in the friendly game. Moreover, conceding a goal in the end allowed them to be more mature and more attentive when dealing with the American danger and attacks.

This leads us to highlight Sweden’s excellent transitions and exploitation of their possession moments in a quick and creative way during the game. Despite having a lower rate than the USWNT in terms of possession, with 49% for Sweden against 51% for the USWNT, Sweden knew how and when to be dangerous and score goals, as opposed to the USWNT. This supports the idea of the importance of knowing exactly how to exploit possession, plan on achieving tangible results through it and not just keep circulating the ball for the sake of it or just wait for an individual super effort. It also explains how Sweden studied the USWNT’s weaknesses in defence and tried to focus on them as soon as they had possession.

The most concrete and effective example is Sweden’s heavy reliance on the right-wing in attack. In fact, knowing that the USWNT’s wingers do not defend a lot made this plan even more successful since Sweden often attacked with Jakobsson, Glas, Angeldahl and Asllani, with the last two leaning so often towards this side to provide passing options. The USWNT’s lack of defensive covering in this game and preference to remain narrow inside the box allowed Glas to be very dangerous on the right-wing whenever she made overlaps, just like you can see below. No centre-back chased her since they opted for marking Blackstenius and keeping an eye on Rolfö especially when she comes closer to the box. Moreover, Press didn’t follow Glas or mark her tightly in this match. 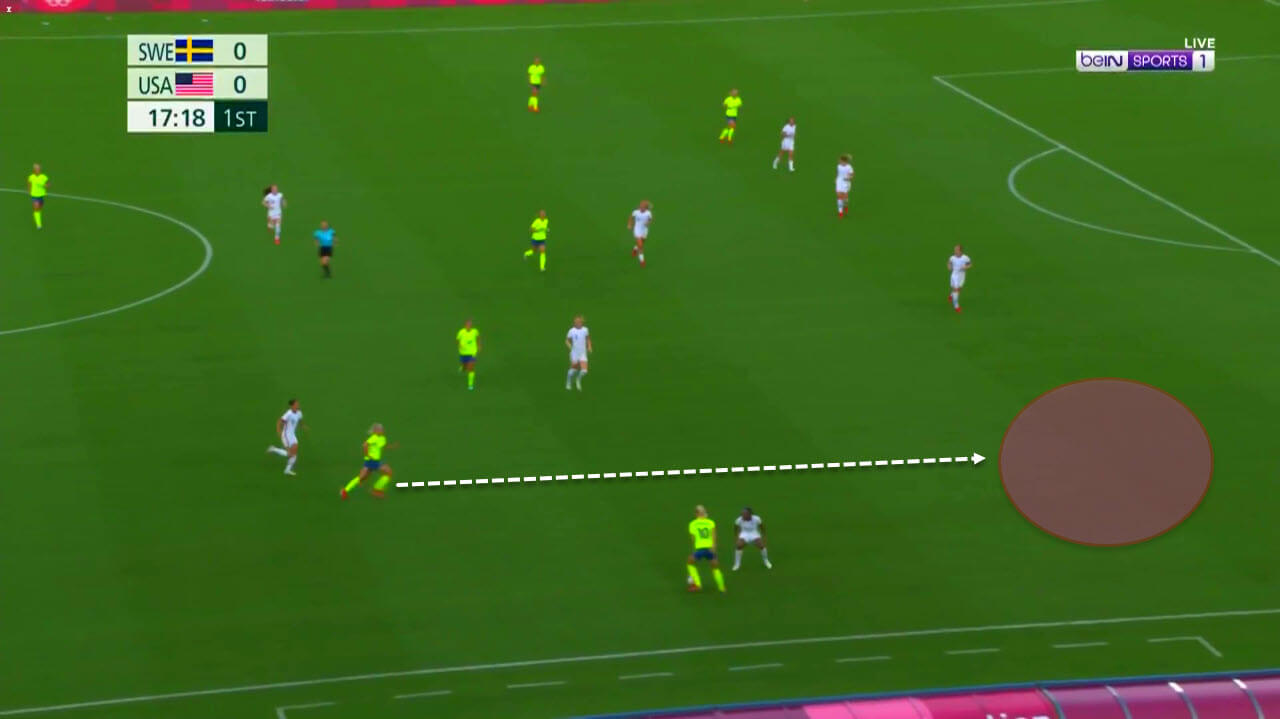 This defensive system was not successful against Sweden since not only their crosses were often accurate but also because Sweden alternated between crossing from the wing, shooting from distance and relying on Asllani’s creativity in the final third. Whenever Asllani had the ball in this area, the USWNT looked hesitant at the back and were not able to mark the front three since they were constantly moving. This gave the opportunity for Asllani to provide key passes to any of them as she often had multiple good passing options like you can see in this action. 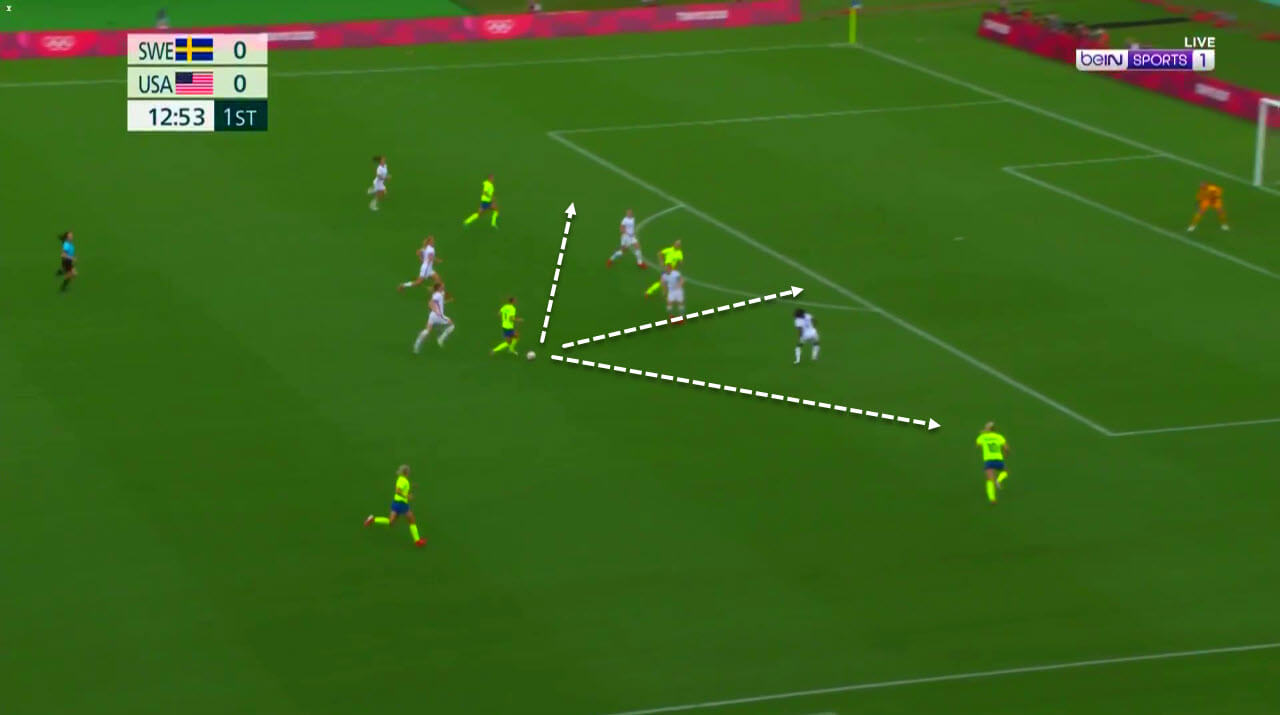 Asellani’s impact was huge in this match in terms of playmaking, she often had the ball in dangerous areas and served her teammates with key passes that could have resulted in more goals. Her passing accuracy rate was 89% in this match with seven accurate passes toward the final third and ten accurate forward passes. Playing just behind the front three allowed Asellani to be so important as she was the player who gave them the opportunity to be in a one-on-one situation with the goalkeeper several times, just like what happened here with Jakobsson. 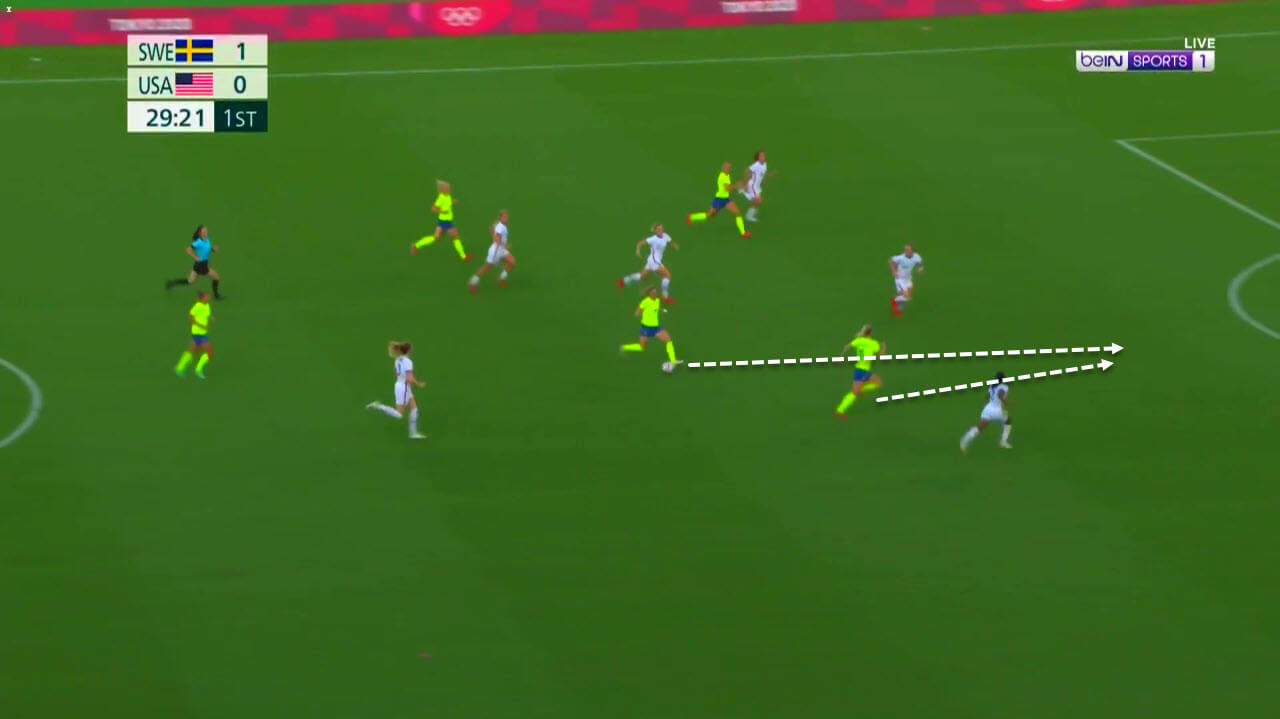 In midfield, the roles of Seger and Angeldahl should not be undermined since the two central midfielders were the ones who blocked most of the USWNT’s attacking attempts, marked Lavelle and Mewis whenever they advanced and more importantly, they linked between defence and attack in a smooth and effective way. In other words, both players did not overcomplicate their plays or dribble so much, they often played with one or two touches maximum and gave passes to one of the wingers who often showed themselves to receive a pass.

This might sound normal as it is the way most teams use in transition. Nevetheless, Seger and Angeldahl were usually pressed by the USWNT’s players as soon as they received passes, and they were excellent in dealing with such pressure by deciding what to do before the ball reaches them. For instance, Seger in this example saw Rolfö waiting for a pass and passed to her with a first touch, knowing that if she keeps the ball for two other seconds, she will be surrounded by the USWNT’s players. Such decisions and passing accuracy enabled Sweden to exclude many USWNT players with a few touches and have numerical superiority upfront. 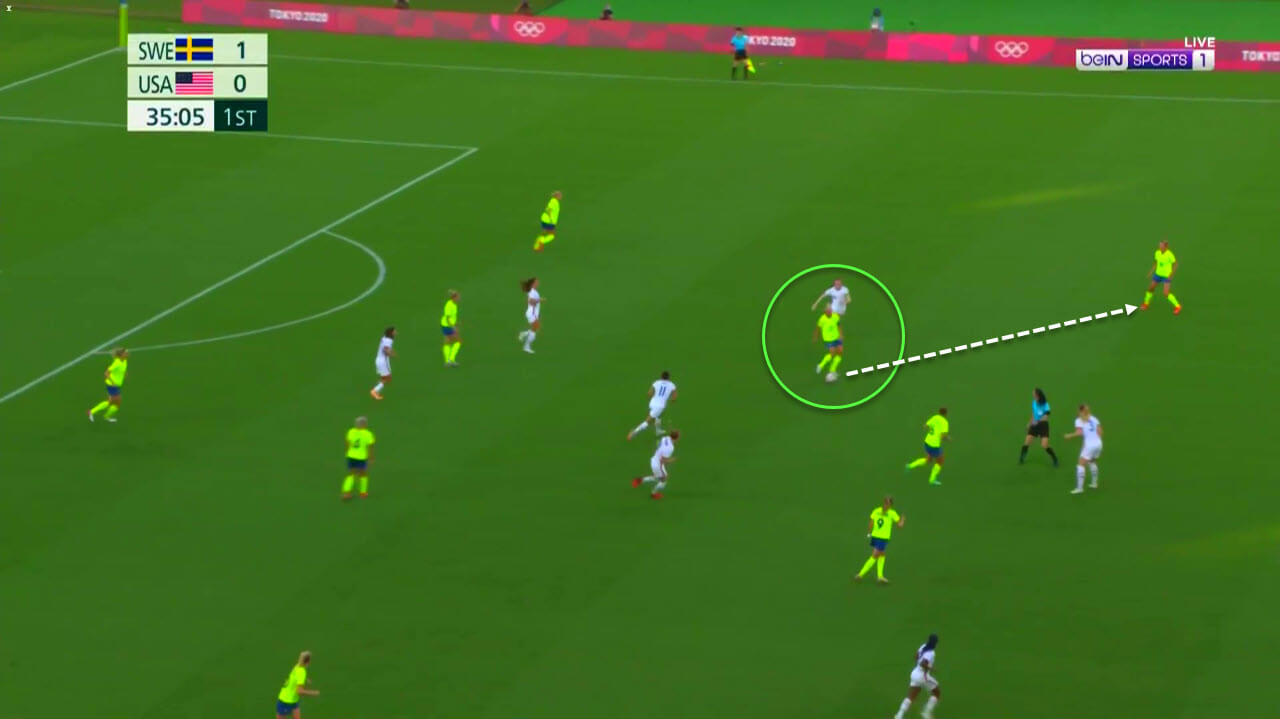 At the same time, Angeldahl provided Blackstenius with some key long passes behind the defensive line and Blackstenius could have dealt better with such situations. Yet, this shows that Sweden have got plenty of playmaking and attacking options. What is needed is just to keep improving their finishing abilities since both Blackstenius and Rolfö missed some clear goalscoring chances in this game.

What went wrong for the USWNT

The USWNT’s performance was certainly one to forget. The team didn’t look in form as they were not able to break Sweden’s defence easily. Although they hit the crossbar and were not lucky on some occasions, the USWNT did not create a lot of danger and did not attack with clear determination to score. What made this even more apparent is the fact that midfield players were often distant from the three attacking players as they not only were marked as soon as they advanced but they were also obliged to retreat a lot in order to defend.

Horan and Mewis did not have the opportunity to play their usual game, help in playmaking or even shoot from distance. And this made the front three’s mission more complicated. Moreover, given Rolfö and Jakobsson’s constant threat and Glas/Andersson’s overlaps, both O’Hara and Dunn did not have the possibility of advancing a lot or creating combinations with the wingers.

The attacking danger often came from Press since Heath was always marked by Andersson. Press however often found herself against two Sweden players since she was not supported by Dunn as needed. This led to resorting to crosses, which was not a really effective idea given Sweden’s excellent aerial duels’ abilities. 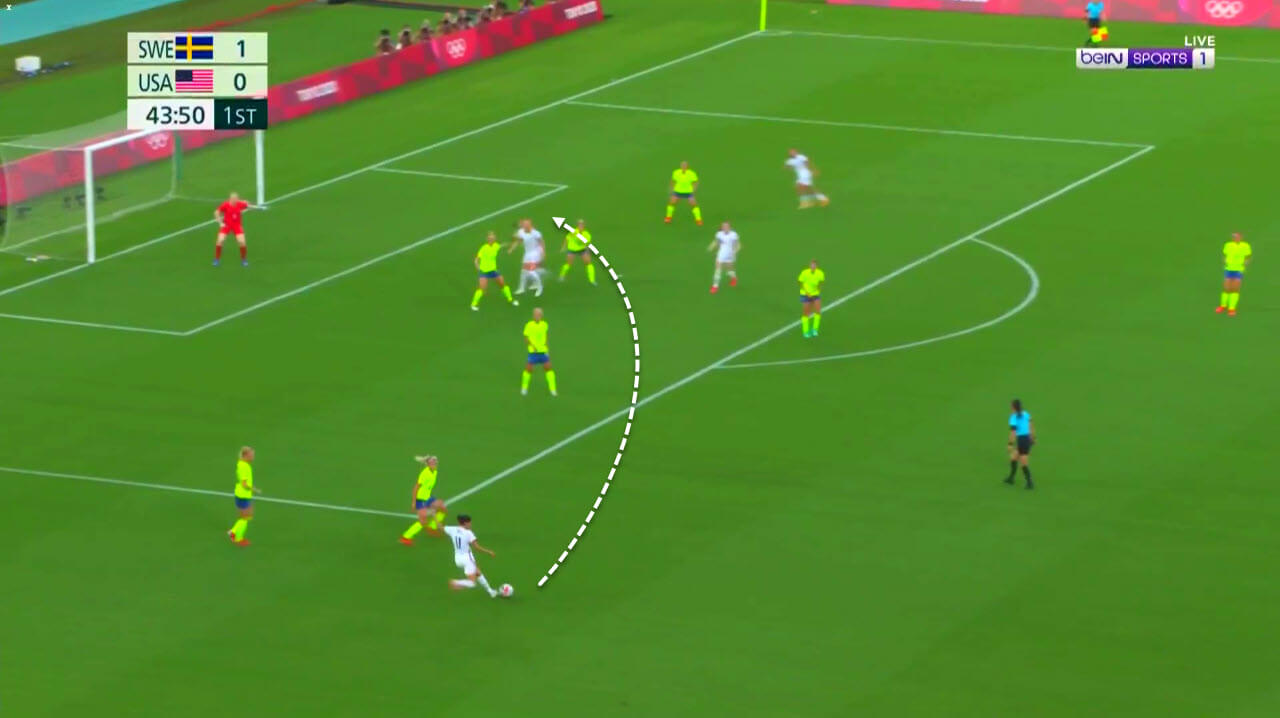 And in the second half, the USWNT tried to get back in the match by subbing Carli Lloyd on and then Julie Ertz, but due to their poor marking in set-pieces, they conceded a second goal that made things more difficult for them. They continued in trying to score through Press’ crosses yet their passing in the final third was often inaccurate. One of the few times in which the USWNT were dangerous was when Lloyd received an excellent long pass from Lavelle inside the box and tried to get rid of her marker and score. However, Björn deviated the ball and saved her team from a goal that could have turned things upside down. 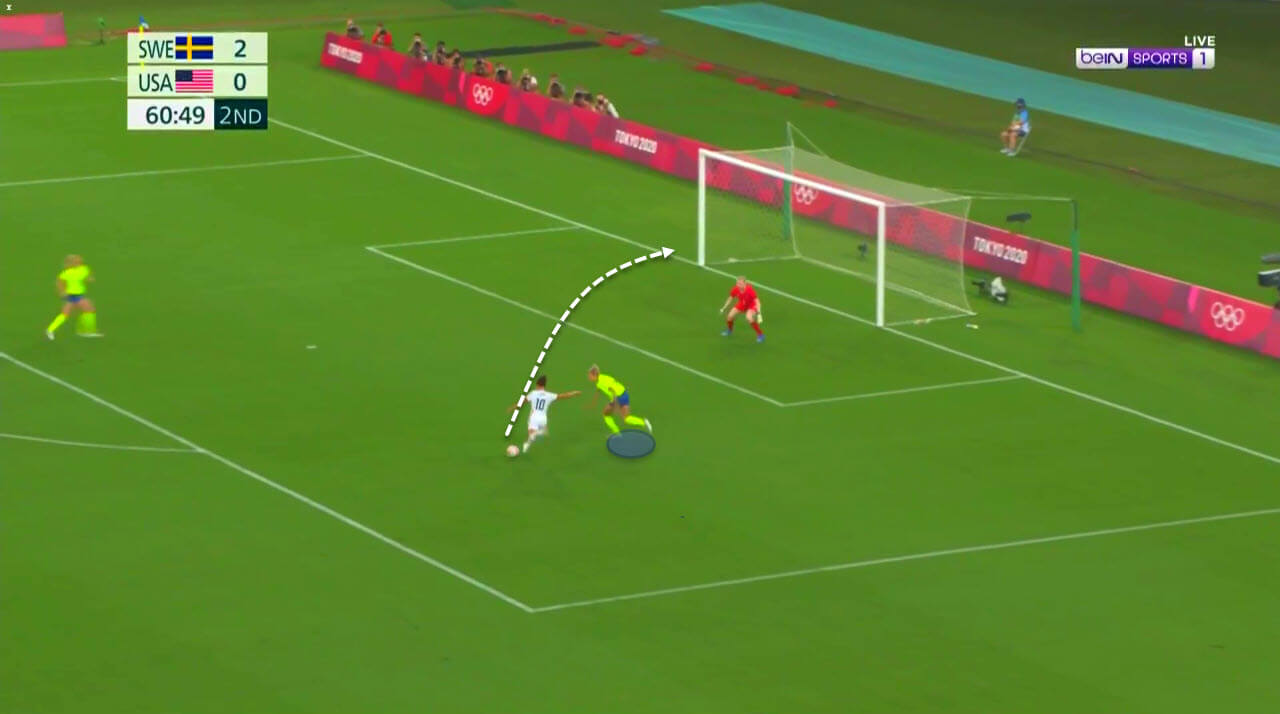 And even with the subbing of Megan Repinoe, things did not really improve for the USWNT as Sweden knew how to keep possession and defend well. After Hurtig’s goal, the USWNT looked tired and were not able to even score a goal given that they were not able to break Sweden’s defence, especially when the latter retreated and preferred to keep possession without attacking a lot in the last ten minutes.

Sweden have certainly made an achievement by beating the USWNT 3-0 in an official Olympic games match. Yet, they should keep playing with the same focus and determination in the upcoming games if they want to reach the later stages of the tournament, since beating the USWNT is not sufficient.

On the other side, the USWNT should reorganise themselves and see what they weren’t good at against Sweden in order to fix it and make up for this loss. Most importantly, they need to address their off the ball movements in the final third, passing accuracy for midfielders and set-piece defending while trying to create different attacking plans to not be predictable like they were against Sweden.