The 2021/22 Ligue 1 season has been quite ordinary in some ways. The capital club, Paris Saint-Germain winning another title is a foreseen circumstance that many could have predicted, it is what is taking place below them that is surprisingly many.

Reigning champions Lille have failed to defend their title, while also being out of the Champions League picture. Lyon sits above Lille in 8th place, with their European journey ended by West Ham in early April – this campaign has been unsuccessful for Peter Botz.

While some teams have failed to find form this season, others have capitalised. Rennes and Marseille looking to be playing across the continent, whether in the Champions League or Europa league—only time will tell. RC Strasbourg has also been a beneficiary of the bigger clubs dropping off. Under new coach Julien Stéphan, Les Bleu et Blanc are in contention for spots within the top four, and if they manage to do so, would be their highest finish since the 1978/79 season when they won the title. Strasbourg makes good use of a good young core, featuring defender Lucas Perrin and Jean Ricner-Bellegarde who are still maturing as players. On the other hand, more experienced players such as Adrien Thomasson and Ludovic Ajorque have fared well so far this season.

While PSG may have nothing to play for, with the title already within their possession, Strasbourg may be able to take advantage of the league leaders’ potential complacency.

This tactical analysis will look into Strasbourg’s defensive tactics and how they nullified their opponents at times. Additionally, I will discuss PSG’s offensive strategy.

Strasbourg utilised a 5-3-2 formation, with Matz Sels starting in goal. Frédéric Guilbert and Dimitri Liénard occupied the wing-back positions. The back three consisted of, Lucas Perrin, Gerzino Nyamsi and Alexander Djiku. In midfield for the home side was, Adrien Thomasson, Sanjin Prcić and Jean-Ricner Bellegarde. Up front, Ludovic Ajorque and Kevin Gameiro. 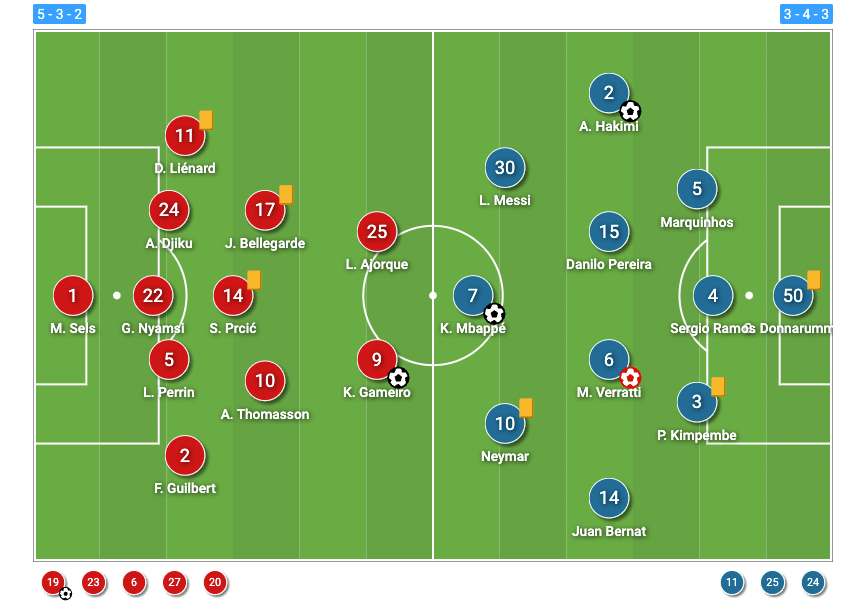 The high line vs Kylian Mbappe

With the quality of players in the possession of PSG coach Mauricio Pochettino, most would grant the already title winners too much respect and simply sit back. While this approach is understandable, Julien Stéphan’s men decided not to veer away from their principles. Strasbourg was quite aggressive regarding attitude, and this can be depicted from their pressing against PSG. When their opponents were playing out from the back, the home side made use of a 2-2 structure high press, wanting to create a sense of pressure within PSG’s first phase of play. This tactic was beneficial at times, but because of the quality of the away side will always find pockets of space when progressing the ball. from this point, Strasbourg would retreat into a 5-3-2 mid-block, with their objective being to block passes into PSG’s double pivot consisting of Danilo Pereira and Marco Verratti. Strasbourg’s midfield line and striker line were quite condensed and narrow, prioritising the centre and in doing so leaving space in the wide areas. 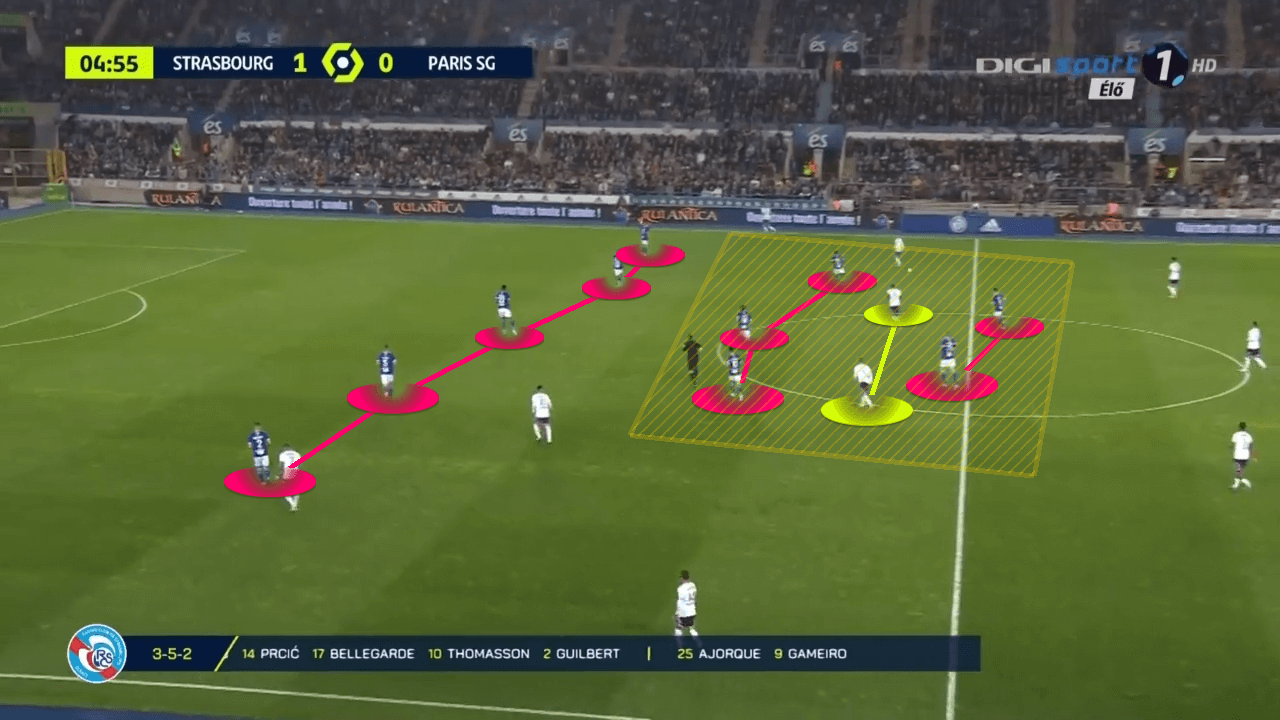 Another demonstration of Strasbourg’s aggressiveness can be seen through the line of engagement they utilised throughout this match. To support their high press, the home side utilised a high line which at times was very detrimental. The high line was brave, but Kylian Mbappe took advantage. The French striker is world-class, in regards to his sharp movements and most importantly, the timing of his movement. Mix this alertness with speed like no other, and Strasbourg have a real problem. Kylian Mbappe was able to capitalise on his opponent’s high line on two occasions, resulting in him scoring two goals.

Mauricio Pochettino employed a slightly different out of possession shape compared to his opposite, Julien Stéphan. Instead of an aggressive press, PSG opted for a more passive approach. Their 3-4-3 transitioned into a 3-4-2-1, with Neymar dropping as a number ten, man-marking Strasbourg defensive midfielder Sanjin Prcić. Both Kylian Mbappe and Lionel Messi were tasked to look after the opposition’s wide centre defenders and shift them, making them play passes into the wide areas, rather than through the centre. There were moments when the Parisian press did break down.

Here, Strasbourg’s left wing-back is in possession of the ball. Messi and Mbappe attempt to apply some pressure on the outside centre-backs. PSG’s double pivot makes the mistake of dropping off and trying to press their opposition’s midfield pair, and in doing so, leaving Sanjin Prcić with too much time and space to dictate play and progress the play. 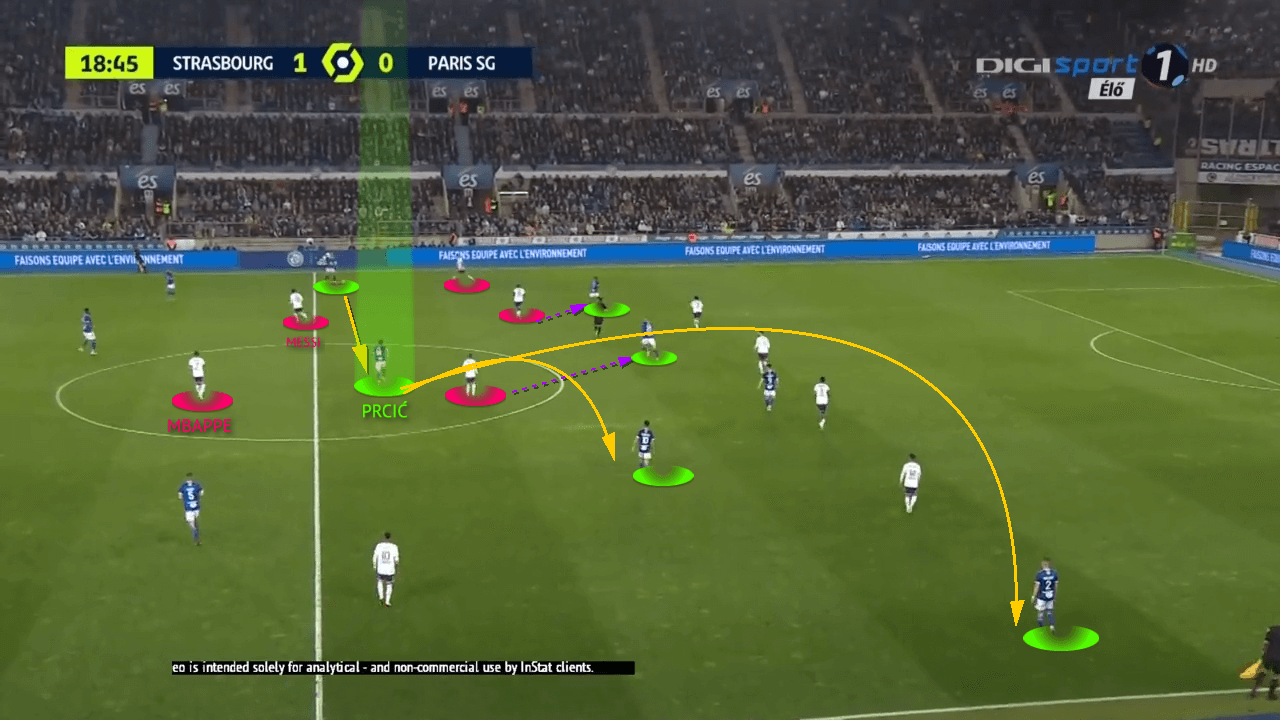 Former Spurs coach Mauricio Pochettino is an esteemed coach within world football. while some results may not have gone his way within the Champions League, we can definitely see how he wants his team to play. As mentioned prior, the Parisians made use of a three at the back formation which change depending on if they were in possession or out of possession. PSG’s front three was incredibly fluid within this game, in regards to their movement and positioning when receiving. All three players took turns to drop slightly deeper and facilitate build-up play. These same players also occupied the striker position and lead the line. It was very clear from the start that Mauricio Pochettino understood his opponent’s defensive shape, as his team did well to understand where the spaces would pop up. Because Strasbourg was so focused then narrowness, the half-spaces were wide open which was advantageous for the likes of Lionel Messi, Neymar and Marco Verratti. At times the striker position was not occupied at all, with Neymar and Messi both dropping deep. This positioning can be viewed during PSG’s first of three goals within this match.

Here, both Lionel Messi and Neymar have dropped off, with the Brazilian positioning himself in the left half-space. When this type of move occurred, Kylian Mbappe would set himself in a wide position, knowing he has the pace to latch onto the incoming ball and turn them into shooting opportunities. Neymar sends a perfectly weighted ball into the channel for Mbappe to chase, and from that point, the Frenchman delivers. 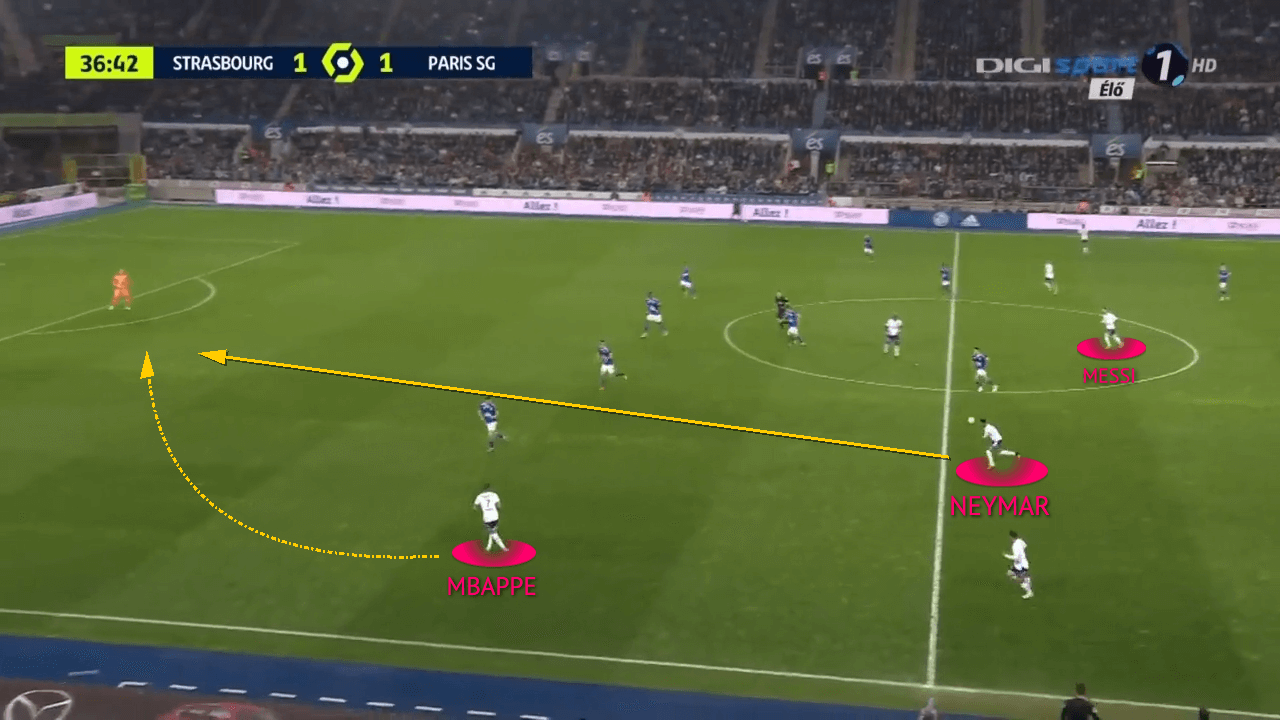 The positioning of the attackers also served a purpose, as they were able to beat Strasbourg’s press on occasion. During PSG’s first phase, trying to play out from the back, Strasbourg at times liked their outside number eights to push high and apply pressure. On this occasion, Adrien Thomasson is the pressing midfielder. PSG’s midfield double pivot liked to split, with Marco Verratti operating centrally as a number 6. In this situation with the Italian dropping and Adrien Thomasson breaking the midfield line, space is now conceded, allowing. Presnel Kimpembe to make an easy pass to Verratti, who like play a first time pass into an empty passing lane to Neymar, who has space to receive, turn and progress the play forward. 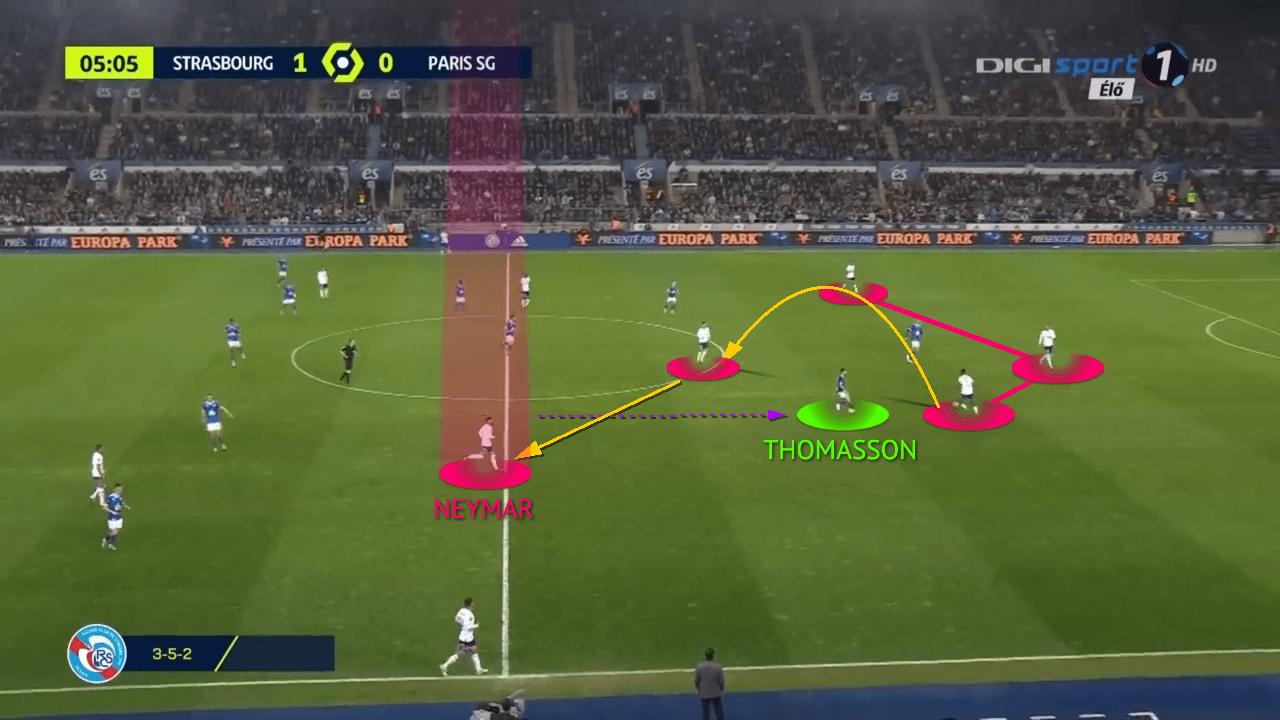 When making use of the half-spaces, PSG was able to create wide overloads and quick transitional play, resulting in space on the far side to make use of. From this point, the play has started from the left-hand side, on many occasions, the Parisians were able to quickly make use of the space they created and quickly move the ball laterally, playing in the likes of Achraf Hakimi creating width. 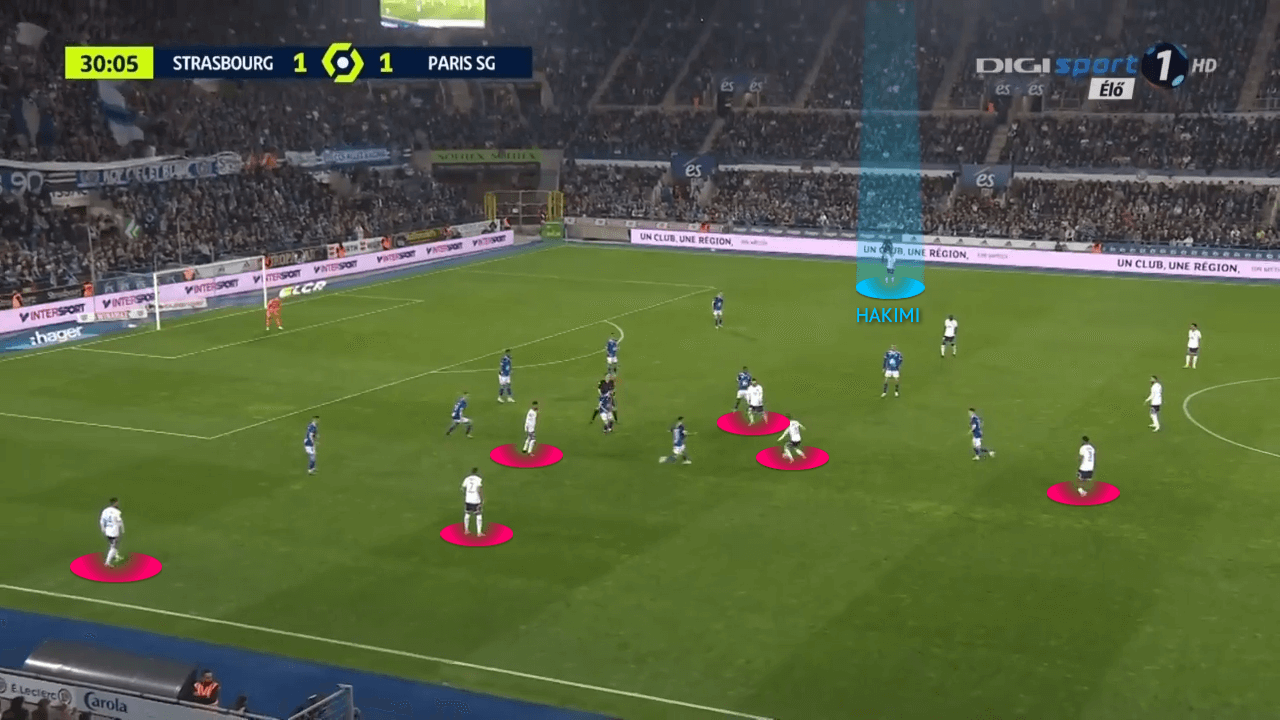 When observing the top of the table within France’s highest division, most would not be surprised to Mauricio Pochettino’s lead PSG won the title. What has occurred beneath the top club is what makes the league so interesting. Bigger finishes around the country have fallen during this campaign; AS Monaco sacked their head coach Niko Kovač as his side was massively underperforming.

Both Peter Bosz of Lyon and Jocelyn Gourvennec of Lille may also be on the chopping block as their teams sit in mid-table, with little to no chance of them featuring in Europe’s most prestigious competitions next season. While teams of prestigious heritage fail to deliver, others have taken their place. Rennes and Marseille are. Have positioned themselves higher up the table, contending for Champions League football, with RC Strasbourg also in the European mix. PSG may have the title already sewn up, with nothing to play for, but for their opponents, points carry a subsequent amount of value. With this being said, PSG could be complacent against a Strasbourg team fighting at the top.

Both teams made use of contrasting defensive systems; Strasbourg preferred to be more aggressive while the away side was more passive. Offensively, PSG did well to capitalise on their opponent’s high line, but through determination and belief in their principles, Strasbourg was able to score 2 late goals when 3-1 down, to finish the game 3-3. While the home side was not perfect during this affair, their aggression defeated PSG’s negligence.