Marcus Edwards will be a name familiar to many, particularly Tottenham fans, due to the youngster’s previous spell with Spurs. He came through the Tottenham academy, and had been widely touted as a player with clear first-team potential, but made the perhaps surprising decision to swap North London and the Premier League for Portuguese side Vitoria de Guimaraes and the Primeira Liga, in 2019. Edwards continued to develop out of the spotlight with Vitoria for two and a half seasons, before making the switch last month to Portuguese giants Sporting CP.

At the time of writing Sporting sit in second place in the Portuguese Primeira Liga, behind Benfica on 60 points. Therefore, with this move to Sporting, we may well see how Edwards fairs on the biggest international stage next season, as Sporting will likely qualify for the Champions League. It will be interesting to see how he performs at this level, and there will no doubt be English teams keeping an eye on his progress.

This tactical analysis and scout report will provide an analysis of Edwards’ key traits and the tactics he suits.

Edwards generally plays as a right-winger and is often used on the right side of a front three. He is left-footed and therefore is used as an inverted winger when appearing on the right.

The 23-year-old will switch wings during games but predominantly operates on the right-side. As you might expect, whilst he does operate out wide on the right flank with some frequency, as indicated in the heat map shown below, the vast majority of his play comes further inside, coming in the half-space and even with a fair amount of action coming from inside the 18-yard box. 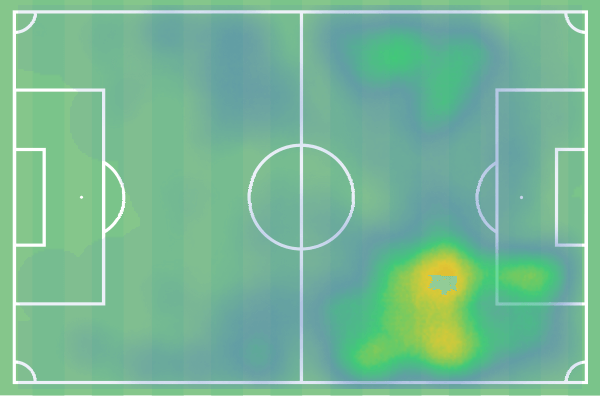 Edwards initially hit the ground running at Vitoria, scoring nine times and making four assists in his first season, but last season he cooled somewhat with just three goals and one assist. However, this season, having scored seven and had two assists in all competitions, his form was enough to convince Sporting to spend just over seven million euros on him.

Whilst the majority of Edwards’ crosses, or at least his most dangerous, come from him sliding past the opposition full-back and pulling the ball back across goal, he is still a threat with his less-favoured right-foot.

He can hang the ball up and can still show remarkably good vision when doing so, as indicated in the image below, picking out the arriving forward, despite facing intense pressure himself. 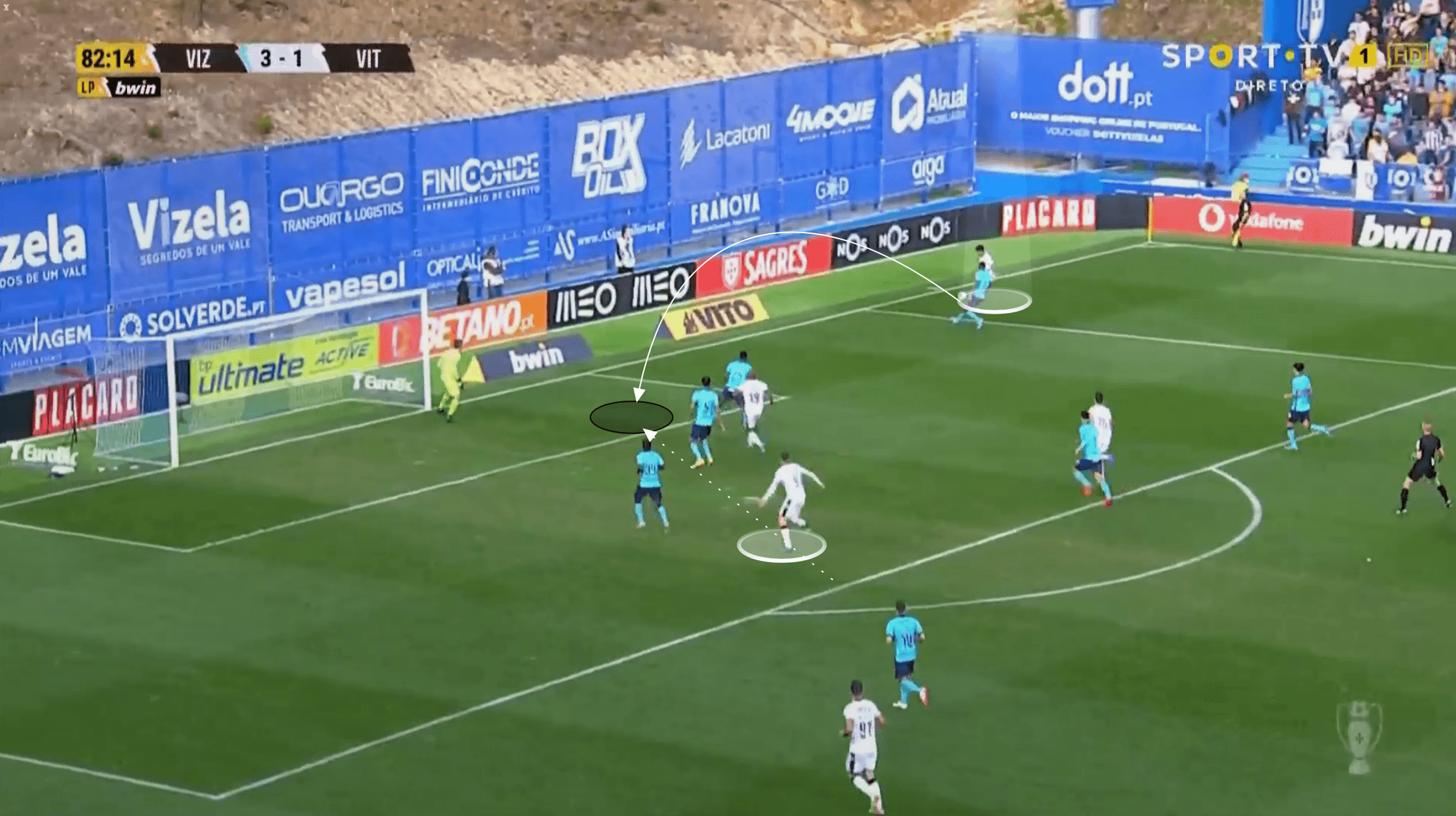 However, as mentioned, he is most dangerous when getting behind the full-back and taking the ball to the byline. He doesn’t rush his pass in this moment and shows composure before slotting the ball into the path of the most available forward. There have been other examples this season where, when doing this on the opposite flank, he decides against making the cross, and instead will pull the trigger himself from a tight angle. 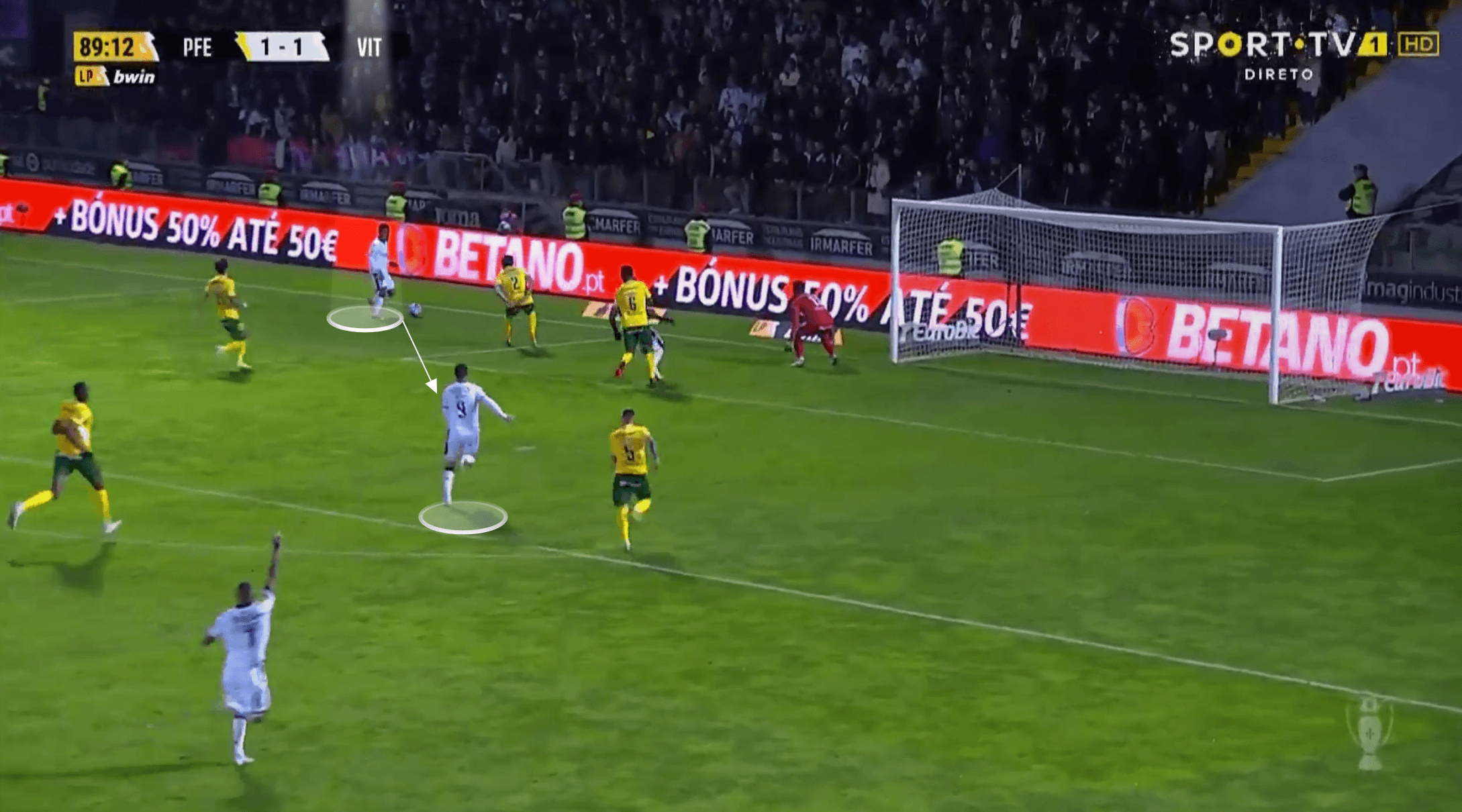 Edwards doesn’t always start in a position in a more narrow area. He will often leave that space open before making a late run into the space he has left for himself. When attacking in the final third, and receiving in this position, he can give himself the opportunity to shoot from distance, float the ball towards the back post, or try even more audacious passes like the one highlighted in the following images.

We can see him cut inside onto his left before playing a quick combination with the closest forward. 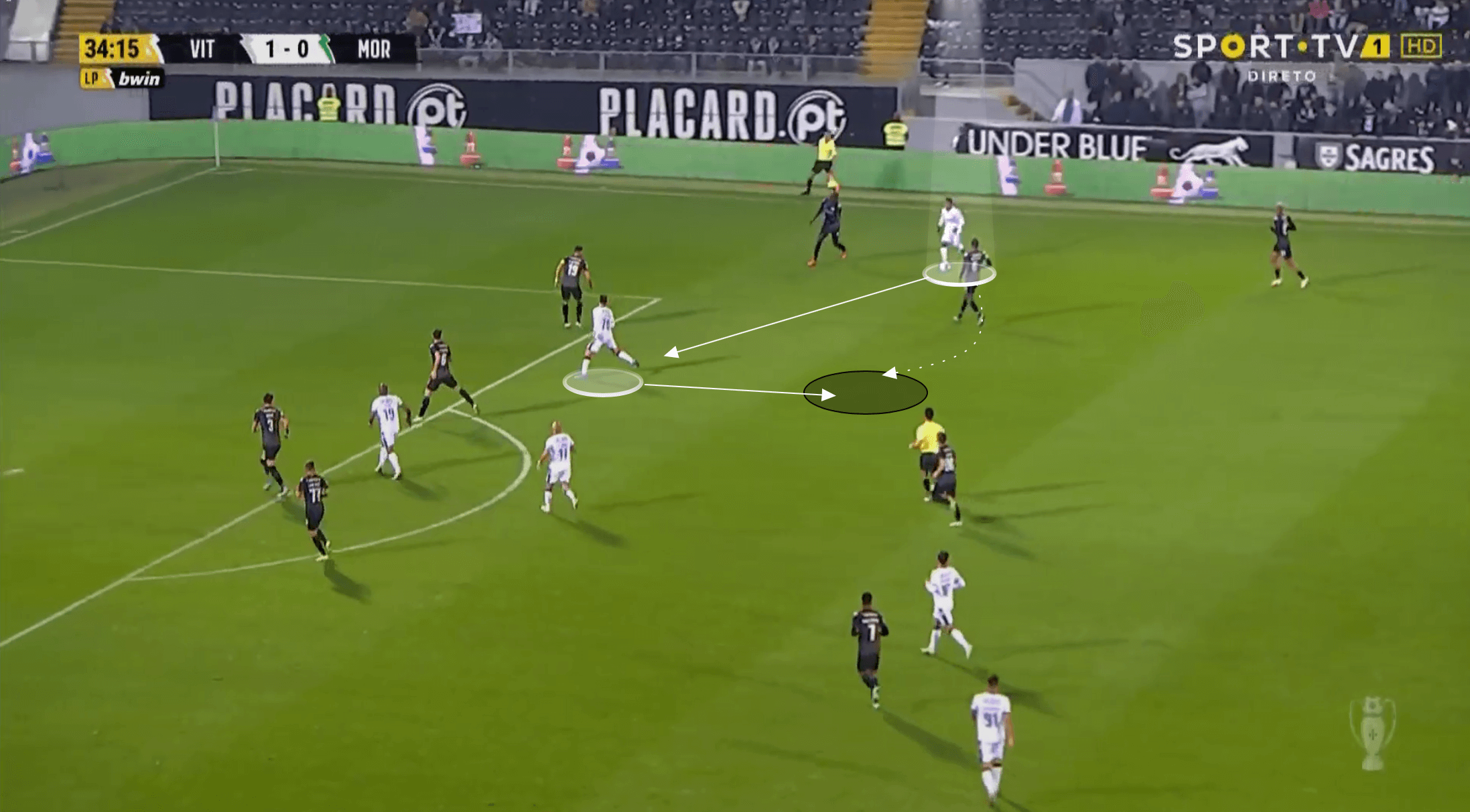 After receiving the ball once more and evading the challenge of the nearest defender, Edwards then showed his flair for making devastating passes in the final third of the highest quality, lofting the ball over the opposition defence with little backlift, playing the ball into the path of the highlighted defender. 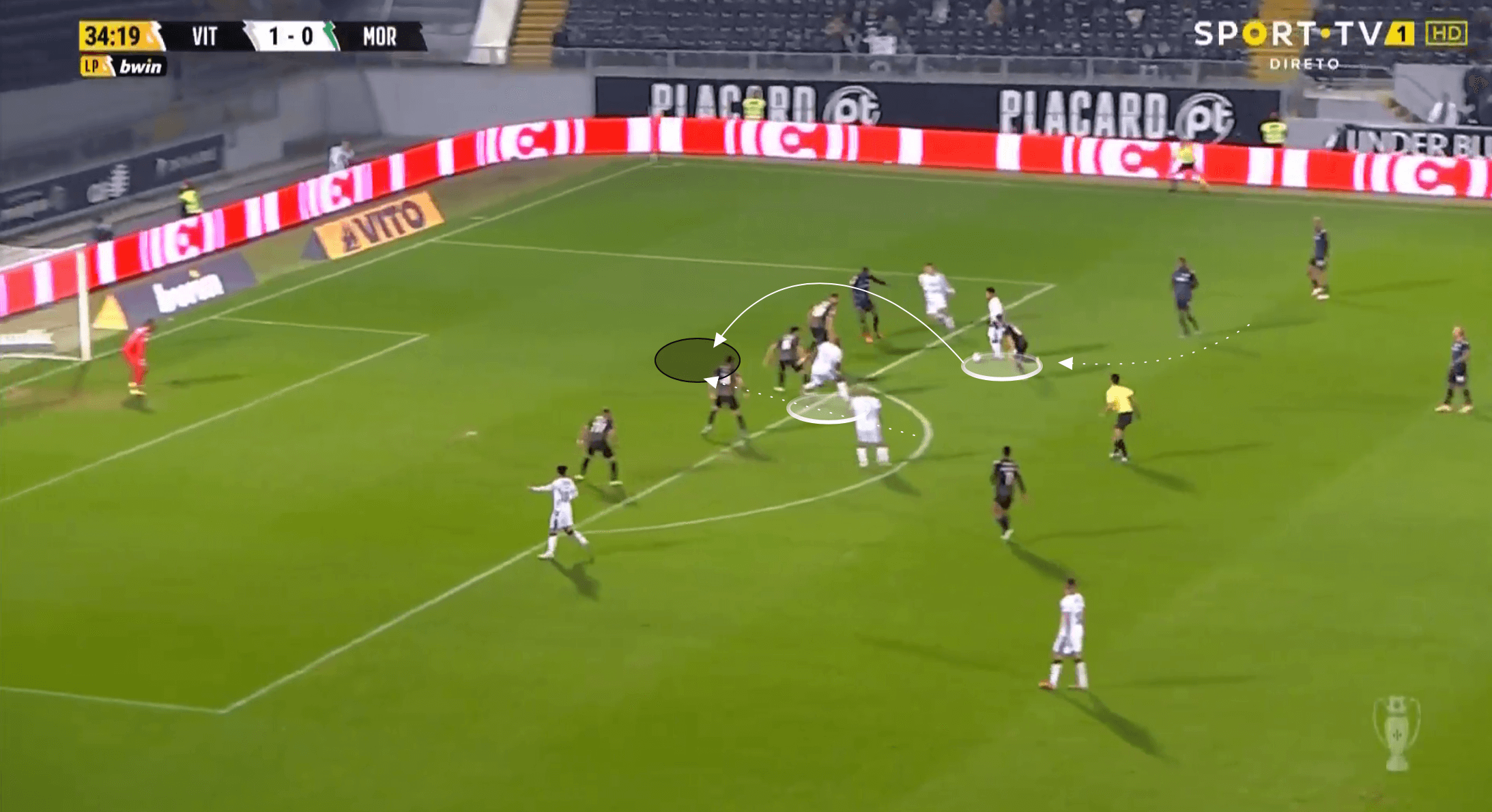 Edwards is a player who will get fans off their feet and there are a number of teams in the Premier League right now who could benefit from such an innovative playmaker.

We can see him exhibiting this skill in a fixture earlier this season against his now employers, Sporting. Receiving the pass inside, Edwards then played a first-time, no-look pass, flicking the ball with his left leg behind him and into the path of his teammate. 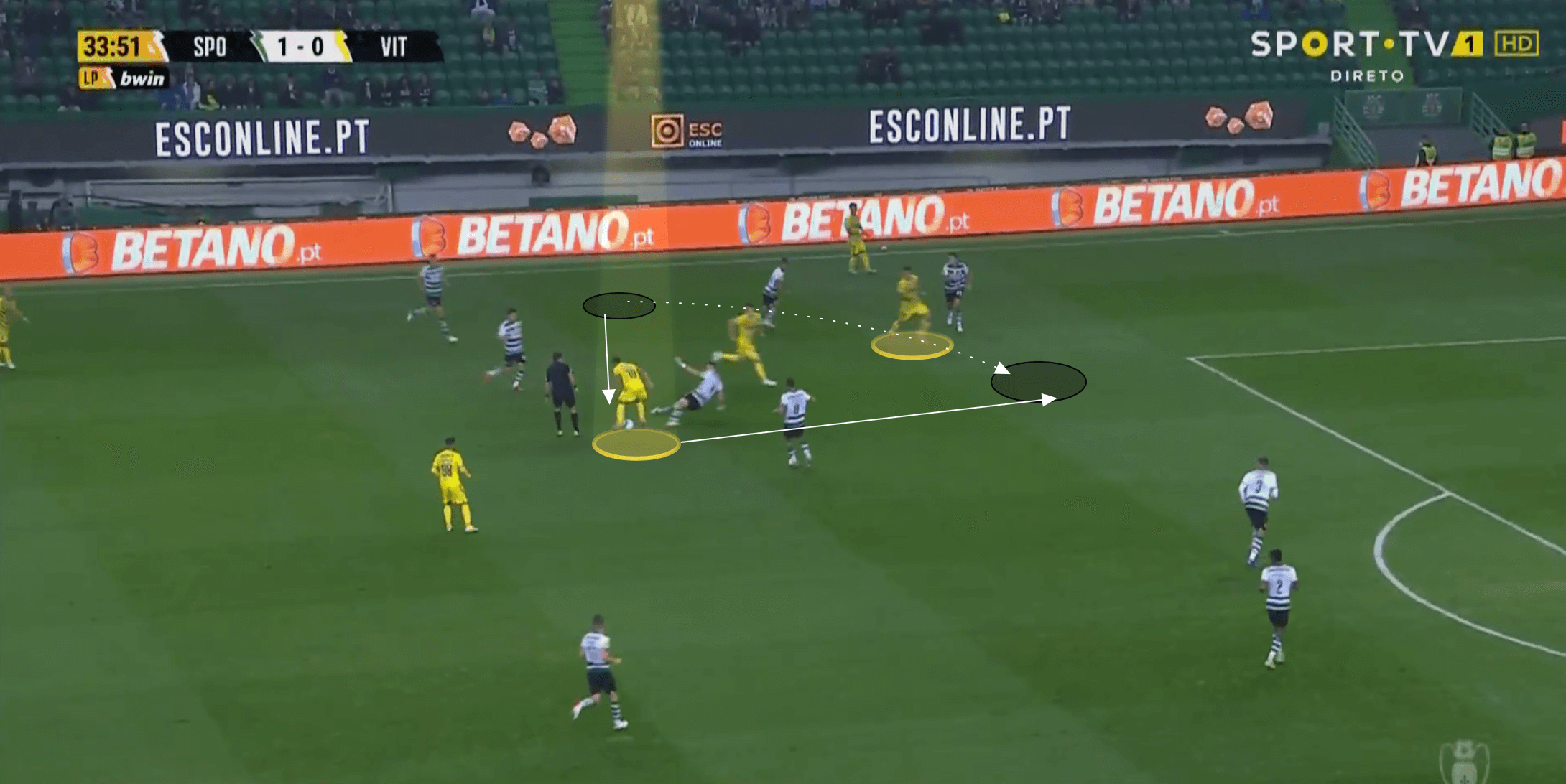 He is a highly creative player and even though it is perhaps his goalscoring that makes for better reading on the stats sheet, Edwards has underperformed his expected assists total by half this season, and with more potent attackers, like the ones he will be playing alongside at Sporting, we may well see this side of his game catch fire in the second half of the season.

Edwards is a dribbler of the highest quality. He has averaged 6.85 dribbles per 90 thus far in the league and has completed an outstanding 61.11% of these as well, making him one of the most prolific and devastating dribblers in the league. He has consistently close control and an array of tricks, on top of a change of pace after a hesitation that is often the doing of even the quickest of full-backs.

Edwards has a penchant for using feints in his dribbles and does so to great effect. He varies his approach on the ball and will cross with some frequency or even shoot from a similar area to the one shown below. Edwards winds up as if to strike the ball, drawing the attention of the nearest defender. He then cuts down the outside of them. 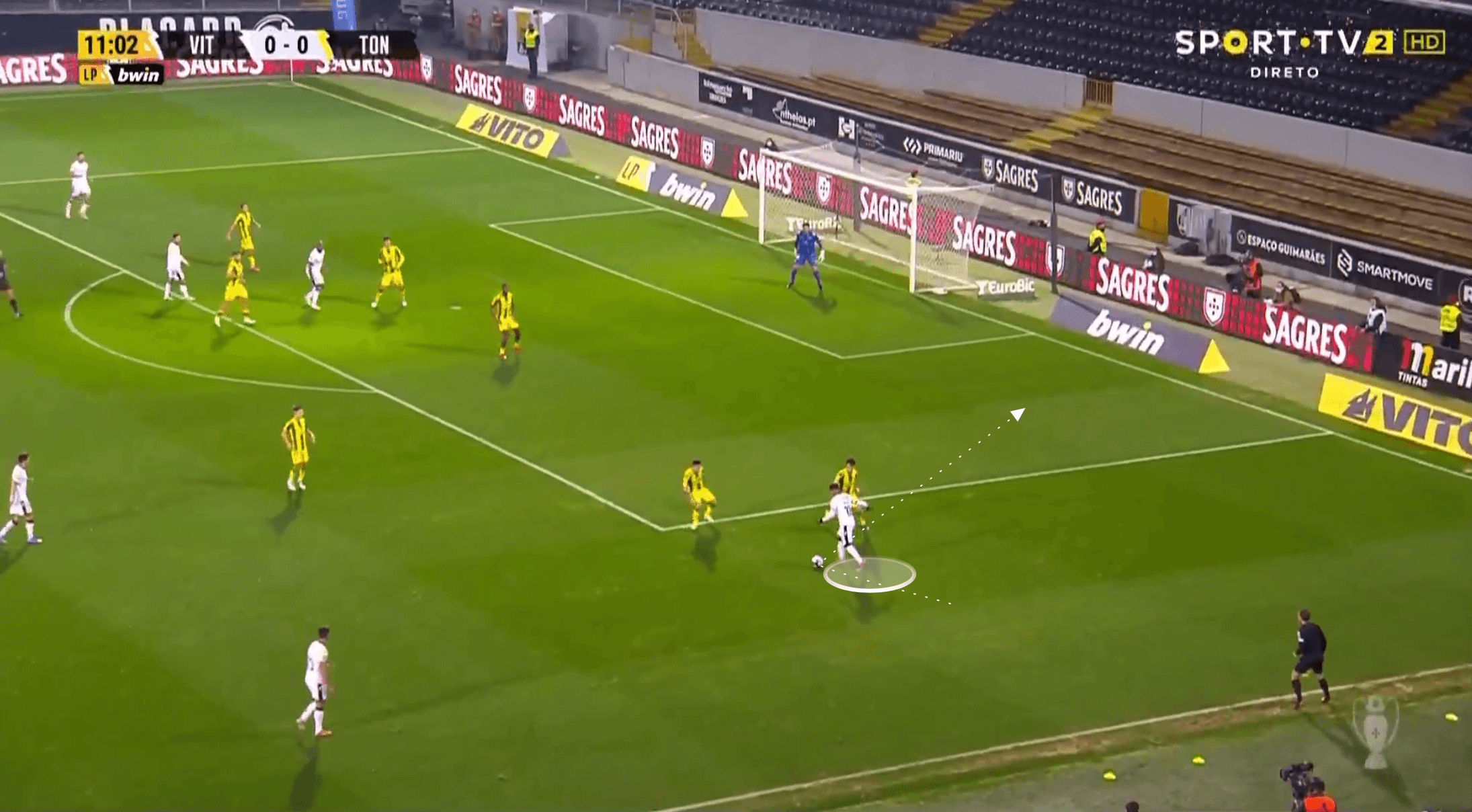 Even though he prefers to use his left and such a situation might most benefit from him using his right, he leans into the defender, often cutting entirely across them and showing them his back. This allows him to use his left, with the defender knowing any contact would send the winger sprawling to the floor and give away a penalty. 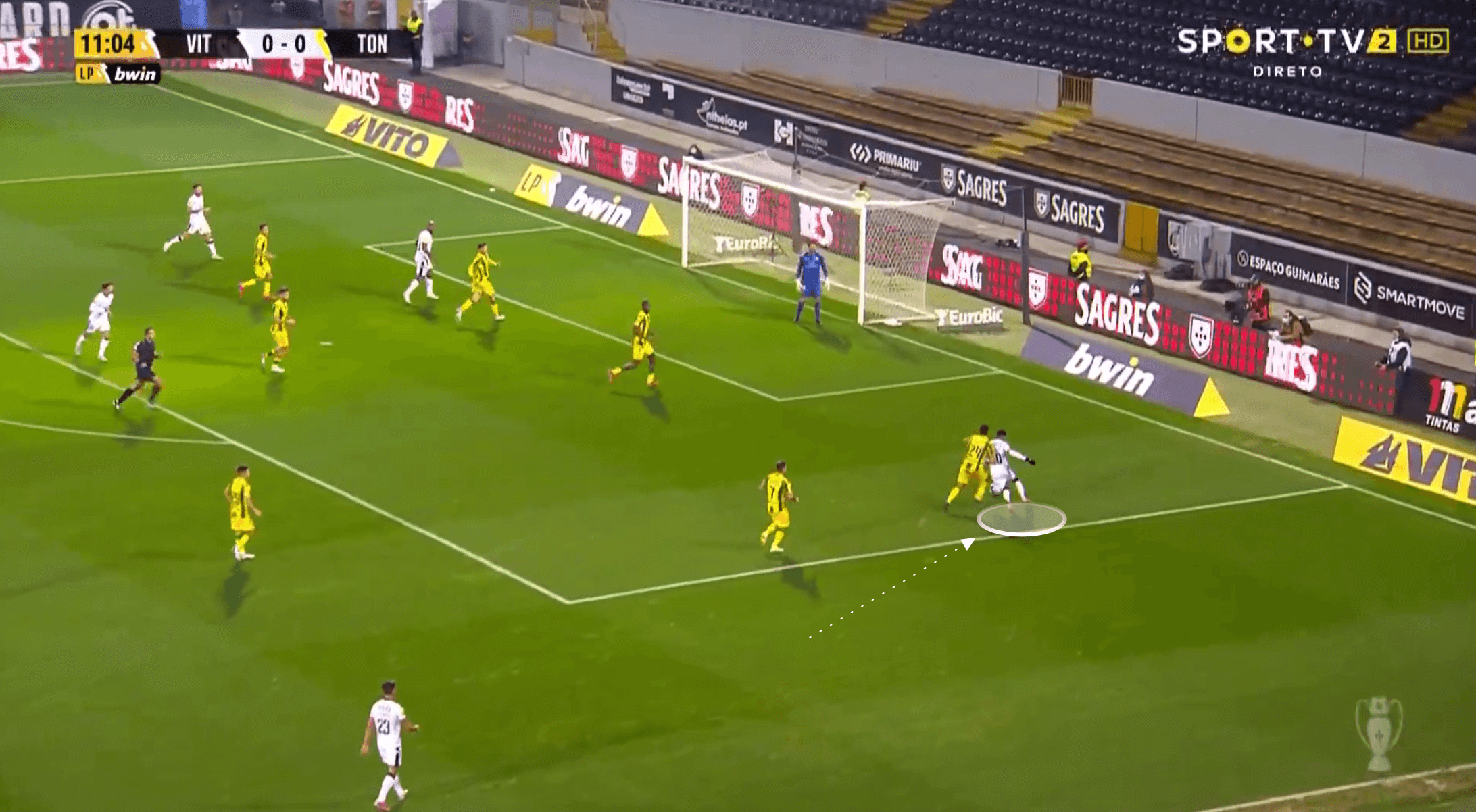 His movement and speed at which he dribbles with this close control is reminiscent of Raheem Sterling, on top of his ability to consistently get to the byline and hit these pull-back crosses.

Edwards has excellent acceleration and top speed over longer distances and as such can be devastating on attacking transition. He is quick to react and often readily available for a pass early on in transition. He can progress the ball as a dribbler and can quickly advance possession in this moment. He has a habit of driving forward, engaging a defender to step out of the backline, before then moving it on to a runner in support. 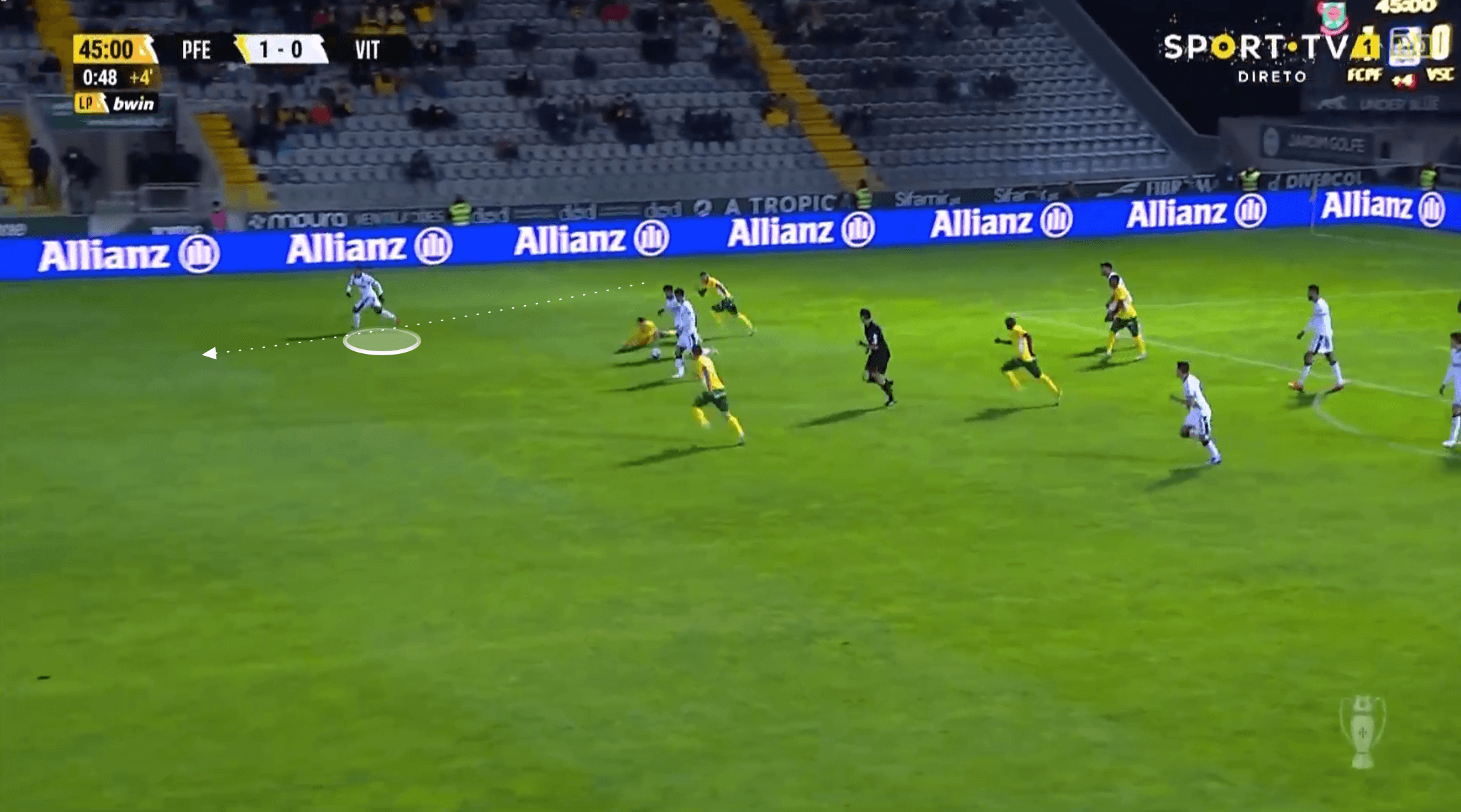 He is able to draw the attention of more than one defender when driving forward quickly and will hit no-look passes in behind as he does so. He releases these passes quickly, often with no back-lift, and his weight of pass and execution can break open a defence. 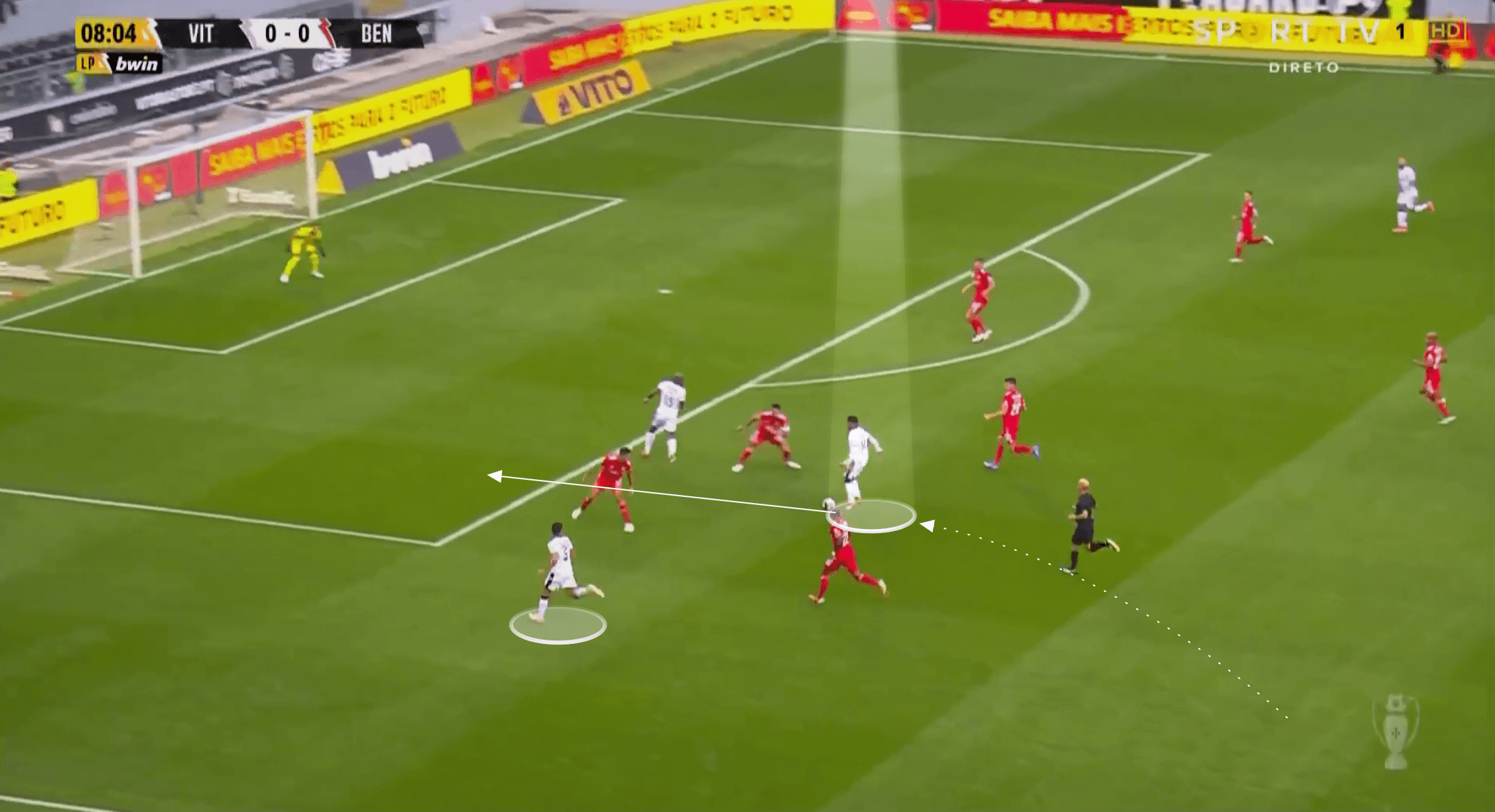 In front of goal

Edwards is minimally outperforming his xG of 5.98 this season and has scored seven thus far.

He is inaccurate when shooting from outside the box, and although, as we can see from the shot map shown below, he can struggle for accuracy inside the box too, he generally scores when he hits the target. 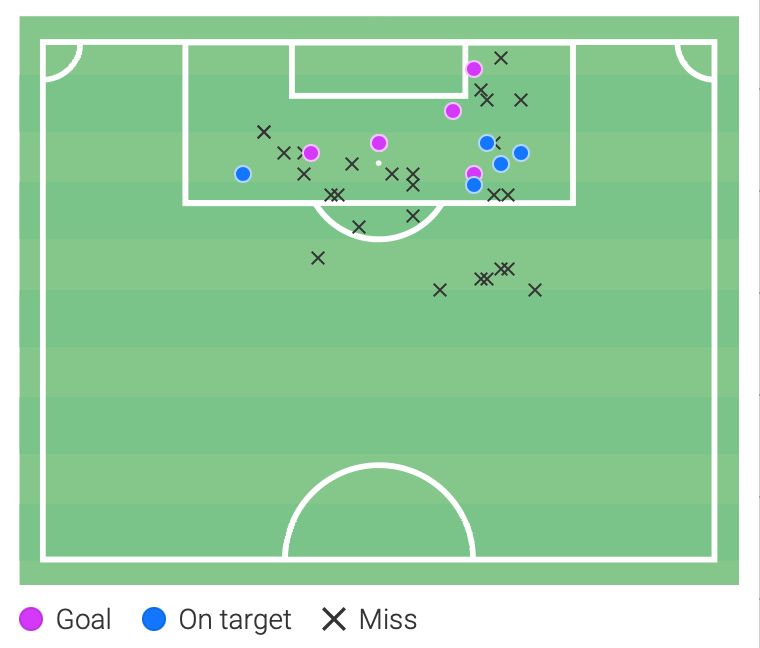 Edwards has a selfless streak to him and there are occasions where he should seek to be more ruthless. He can receive the ball in goalscoring positions and yet will look for a nearby pass or cross option instead of taking on the shot himself. 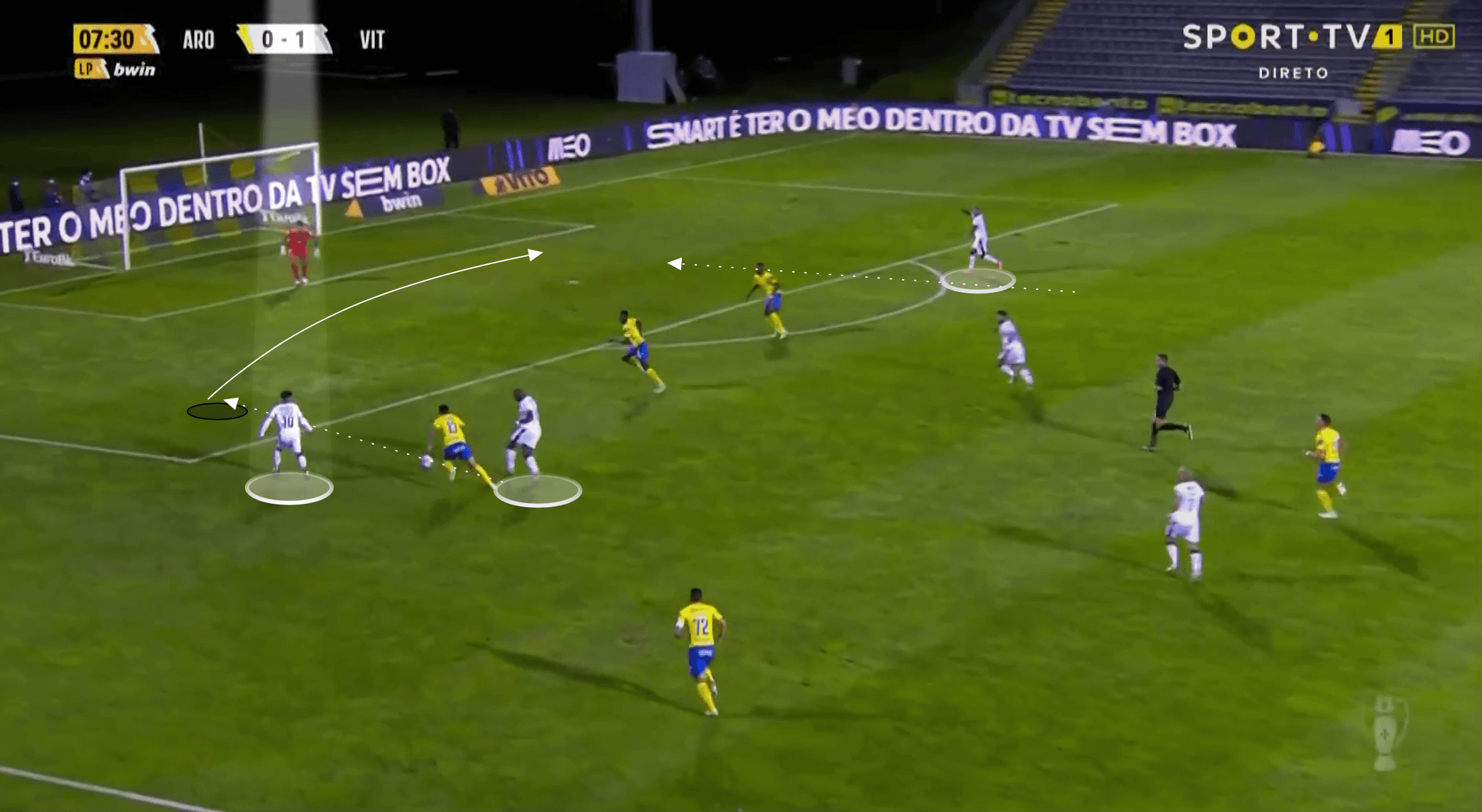 Despite a reluctance to take on shots at times, he can nevertheless show a confidence in front of goal in other moments. He needs to gain a consistency with his approach in the final third.

However, whilst there is still potential for growth, he is already performing relatively well in this area of his game.

He times his runs into the final third well. He is clever in making late movements, starting from a wide position before shifting inside at the last moment, evading his marker.

Below we can see him doing this as his teammate drives forward on the ball, cutting across him and angling his run in between the two centre-backs. 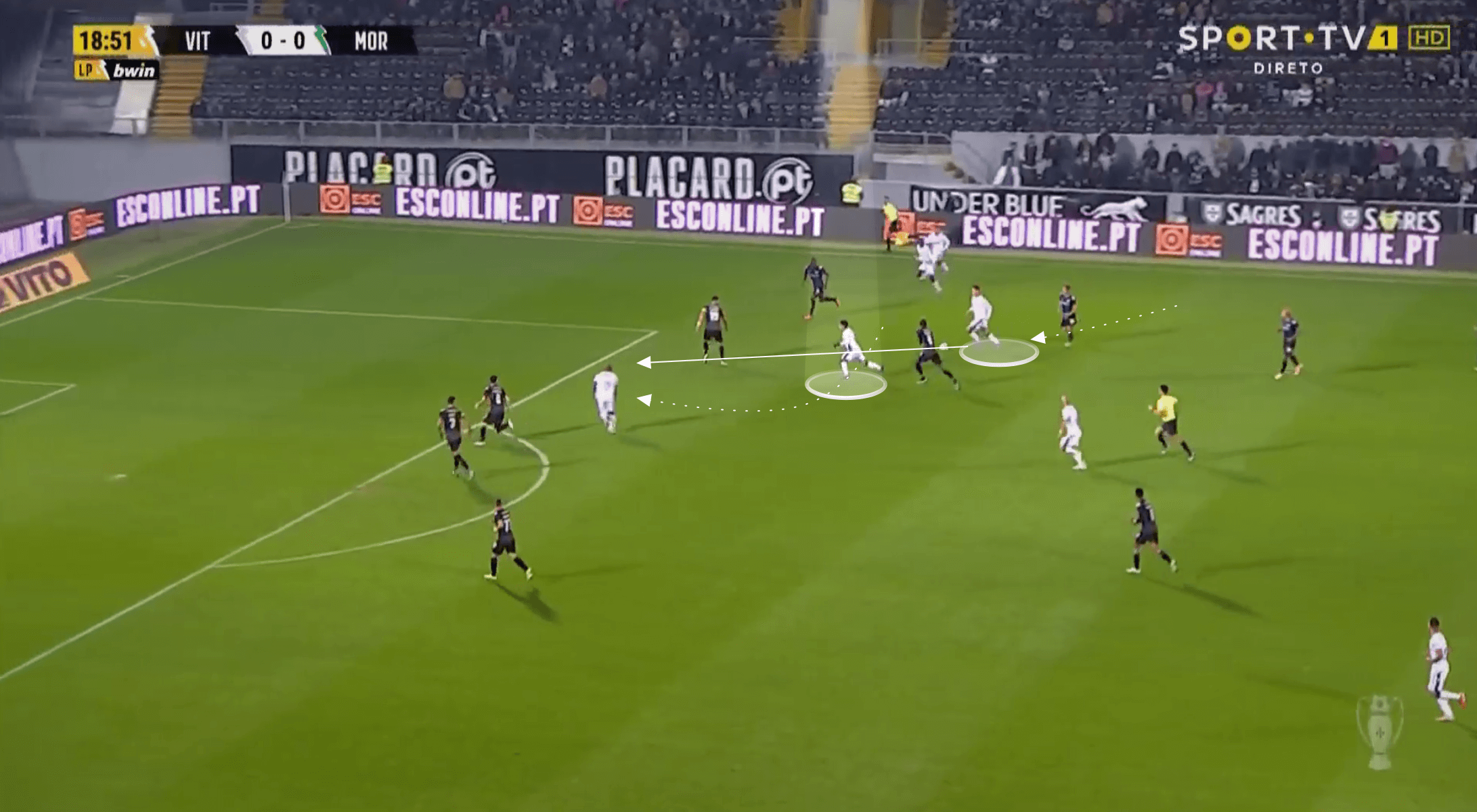 After being played in behind he is able to finish cooly, sliding the ball past the keeper into the far corner. Edwards will nearly always shoot with his favoured left and is confident taking on the shot with the inside, lace or outside of his boot. 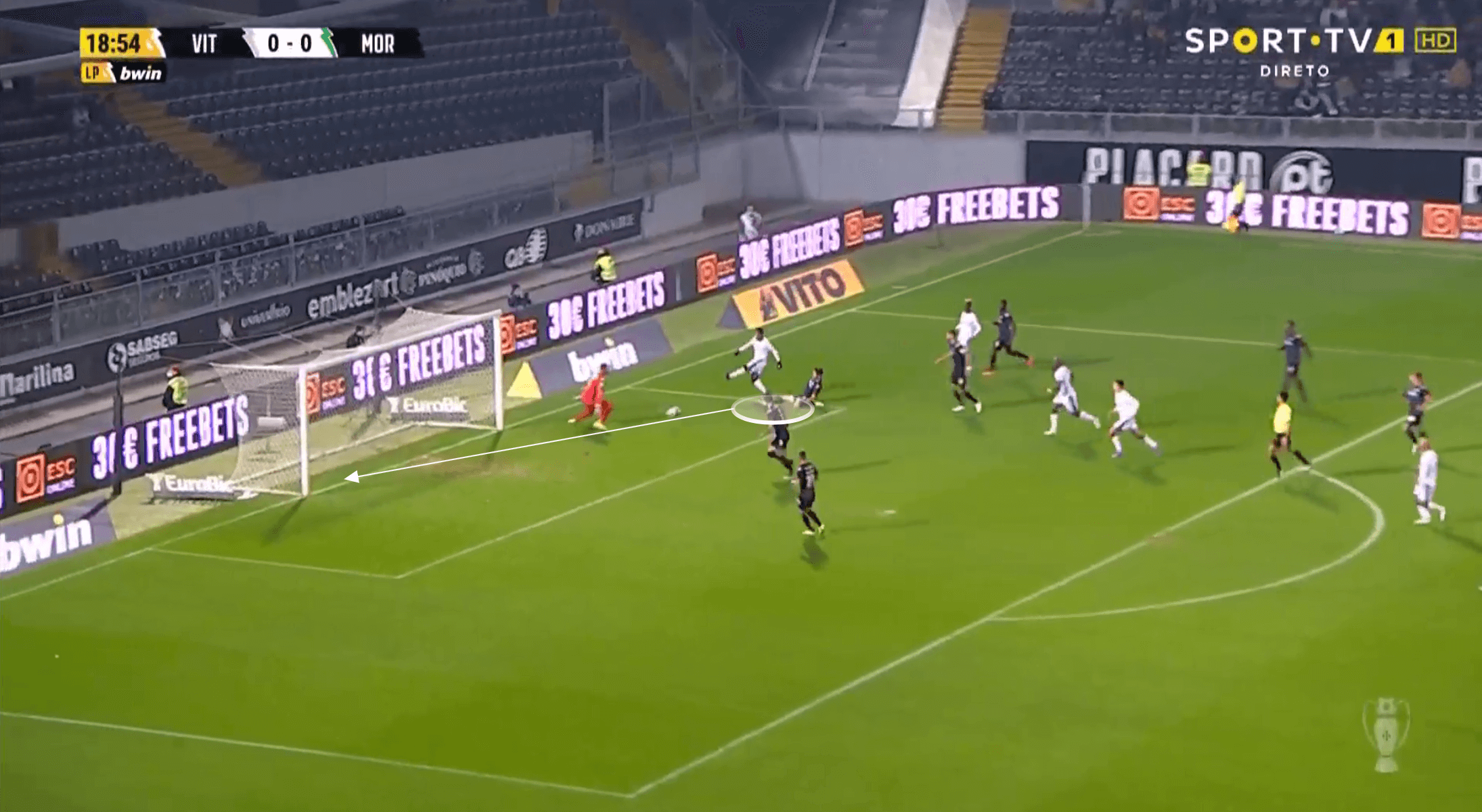 Confidence oozes throughout his game and there is a flair evident throughout so much of his play. He is confident enough to pass up the initial chance to take on a shot, as we see in the image below, using that trademark feint to dribble into a better shooting position.

Whilst he can be erratic with his accuracy, when he does hit the target he consistently picks out the corners, perhaps suggesting why he has such an impressive conversion rate on shots that hit the target. 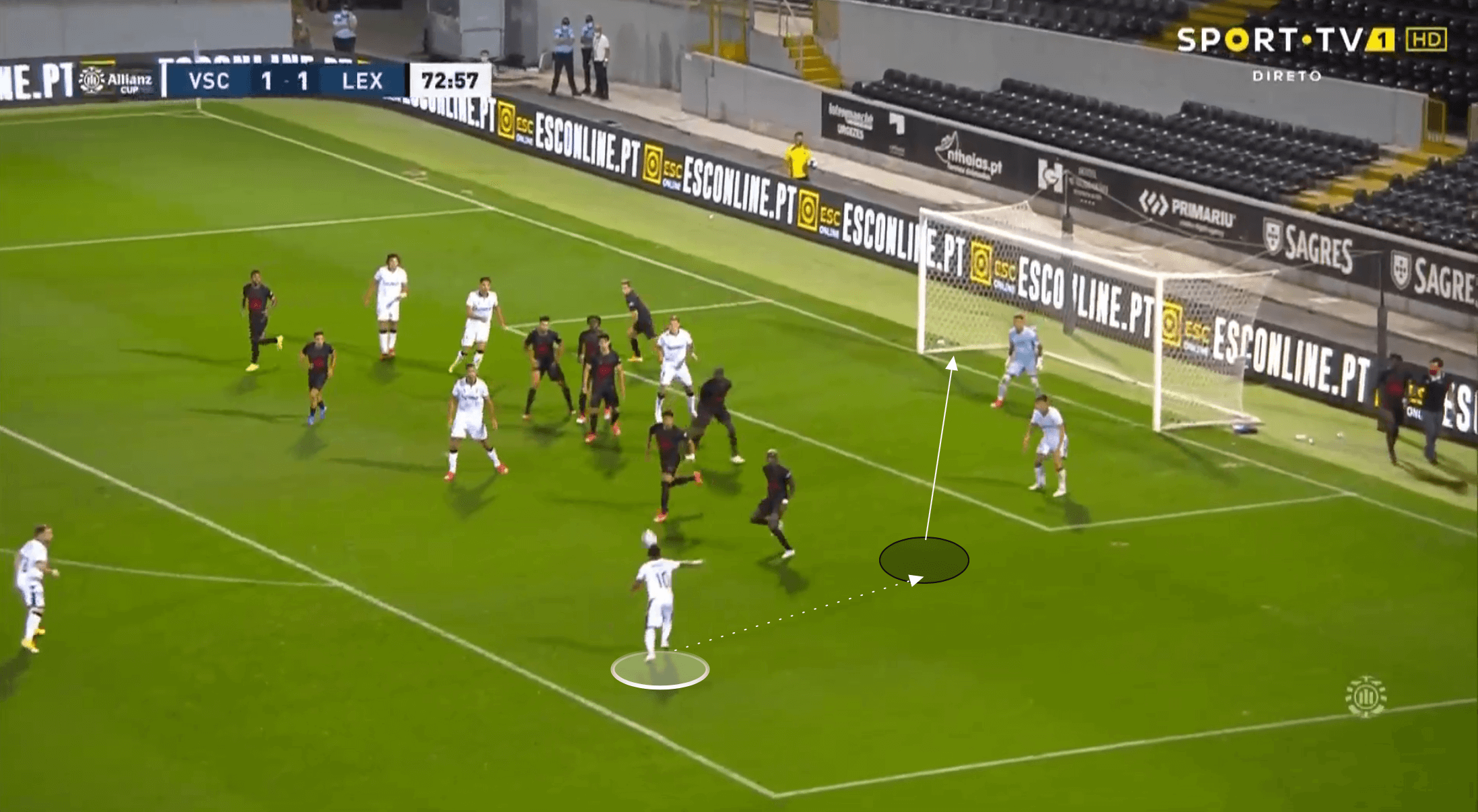 Edwards has been out of the spotlight of the English media for some time but has been developing considerably in Portugal, and his move to Sporting may well push him into the spotlight. He is a winger with the ability to change games. In developed attacking phases he can break past a full-back with a dribble and deliver the ball into dangerous areas, whilst he can unlock a defence from a more narrow position through his dribbling or ability to pick a pass. In attacking transition he is quick to make a run supporting the attack and can progress the ball himself at pace. He should be registering a higher number of assists but despite inconsistent finishing quality, he has still been potent – at least when hitting the target.