Serie A 2021/22: How Juventus grabbed a difficult point in the Atalanta draw – tactical analysis

Apart from the Napoli-Inter game, there was another big game in this Serie A fixture as Atalanta hosted Juventus on Sunday. Before the game, both teams were separated by a two-point margin, but Gian Piero Gasperini’s side had one more game less than the opponents. This could be a potential decider of the UEFA Champions League 2022/23 seat as well. Despite the controversies in the game, Juventus managed to secure a point at the end of the game, there were also some good performances from Massimiliano Allegri’s troops. This tactical analysis will explain the dismarking strategies of Juventus to exploit the man-oriented defensive tactics of Atalanta, and how Álvaro Morata played as a left-winger in the Old Lady.

Atalanta finally overcame the injury crisis with fresh players back to the squad. Merih Demiral partnered Berat Djimsiti and Rafael Tolói as the centre-backs, with Davide Zappacosta and Hans Hateboer as the wing-backs. Remo Freuler, Marten de Roon started as the 6s with Teun Koopmeiners as the attacking midfielder, supporting Jérémie Boga and Luis Muriel.

Allegri had so much trust in Dušan Vlahović ability as the new arrival from Fiorentina started consecutive games already. To accommodate the Serbian striker, Morata was moved to the left-winger position while Paulo Dybala played as the right-winger. In the midfield, the three players chosen were Weston McKennie, Adrien Rabiot, and Manuel Locatelli. Danilo, Leonardo Bonucci, Matthijs de Ligt, and Mattia De Sciglio formed the defensive line.

With the new and expensive signing, some may think Allegri would put Morata and Vlahović together in a two-striker system, given Juventus also played in a 4-d-2 or a 4-4-2 earlier in the season. However, the 54-year-old head coach wanted to include Dybala in the starting lineup as well, and they developed a 4-3-3 system which allowed all the above players to start together. Before digging into the functional role of Morata, we should explain the Juventus offensive tactics in a broader picture in this section. 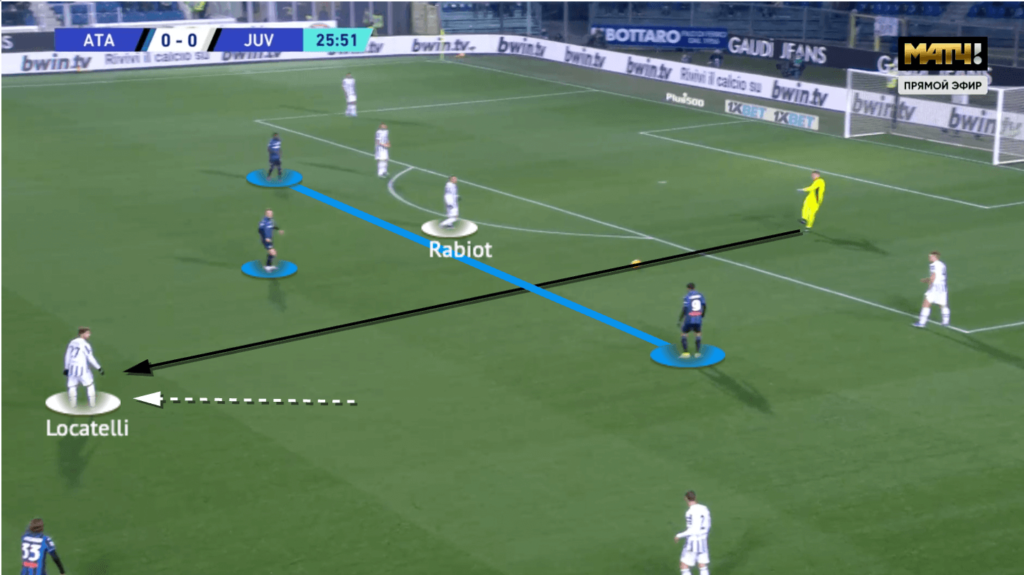 Everyone in Europe knows Gasperini’s Atalanta must defend with a man-oriented scheme, which means they would match the opponents’ shape in the pressing, go man to man, and follow the respective marking targets to a larger extent. The best way to exploit such a defensive system must be manipulating the defence by positional interchanges that made Atalanta difficult to follow because of the long travelling distance. Inter did something similar but more cautiously as we have shown in this analysis.

In the build-up, Juventus wanted to create a numerical advantage over the front three of Atalanta’s 5-2-1-2, this was done in several ways, including using Wojciech Szczęsny as the extra man to create a 4v3, playing with counter-dynamic routines to solve the press, reaching the free player, and more.

The above image shows another possible way to exploit the man-marking of Atalanta, which was rotating the midfielder’s positions to create temporary 2v1 on the man-marker by the time of arriving. When Rabiot dropped that deep into the opposite half-space, usually Freuler would be reluctant to travel with him and that gave Juventus an extra man in this phase. Meanwhile, Locatelli, who was the target of Koopmeiners initially, went behind the second line to receive, and the Old Lady had the outlet to progress plays. 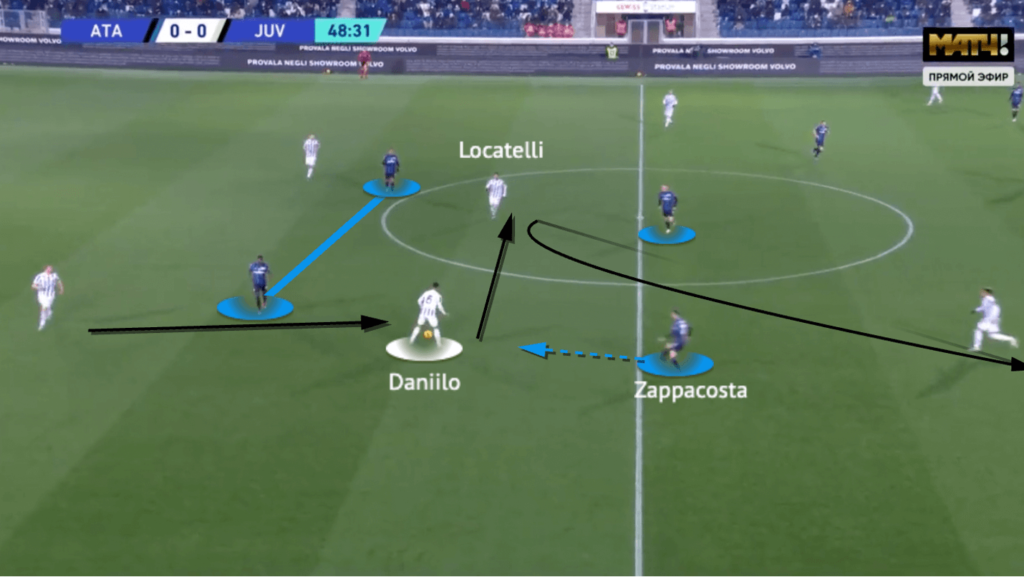 Around 30 minutes later, Allegri established a clearer direction for his team by inverting Danilo into the centre more often. So, he became the extra player to help Locatelli instead of a midfielder dropping deep because Rabiot’s energy was needed in the forward runs closer to the final third. That became an important part of Juventus’ construction process as the Atalanta left wing-back always arrived late on Danilo, and mostly from the touchline, he could not block the angle of the pass.

When Danilo dropped in the first build-up chain, he would be the third man to overload the two strikers of Atalanta’s 5-2-1-2, but Bonucci and de Ligt and very good passing so the Brazilian international could play between the first and second line as well. Here, he supported the attack and found Locatelli as Zappacosta was not even close when he received it.

The second and third phases of Juventus attacks were more about space vacation by movements. Here, Locatelli knew the space would appear on the right side because Danilo dragged Zappacosta high, and McKennie dropped to pull the marker away, Atalanta would not have many players in that area. 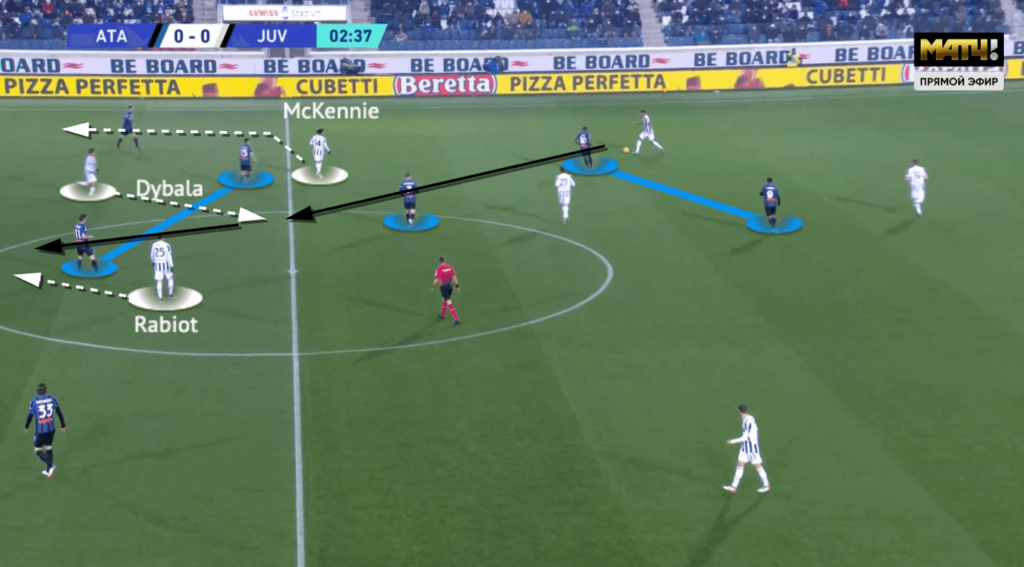 The rather direct and quick football of Juventus was their strategy of the day. Compared to Inter’s game against Atalanta around a month ago, the Old Lady were less competent in playing under pressure and in tight spaces; Allegri was not a coach obsessed on playing short passes, what he did was to try exploiting the high line of Atalanta with movements of players. Maybe that was one of the reasons starting McKennie and Rabiot over Arthur Melo, because both starters had better energy and off-ball movements to create spaces for the front three.

In this game, we often saw McKennie drifting to the wide spaces at a quick speed to bring de Roon away from the centre, so the inside spaces were vacated for Dybala to turn with the ball. Before Danilo tucking inside, he was usually staying in the wide channel to receive a lay-off or a diagonal pass from centre-backs, exploiting Atalanta’s deeper wing-backs. As shown above, Zappacosta was not even close to Danilo, as Atalanta merely shuffled Boga to press Danilo.

This scenario shows McKennie never expect the ball to his feet in the centre, and he smartly ran forward to draw de Roon away, allowing Dybala to receive in that space. Then, after the pass was made, Rabiot moved into spaces behind Freuler to give Dybala a progressive option. Just two or three passes with decoy movements off the ball, Juventus advanced the attack to the offensive third very quickly. 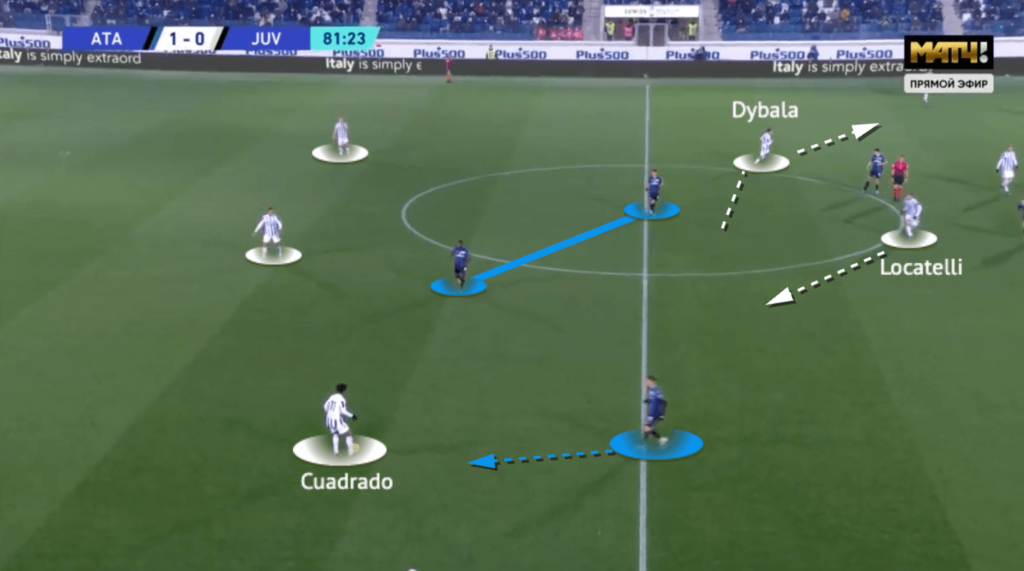 Even in the second half, when Juventus were one-goal down, similar attacking strategies were observed. Juan Cuadrado replaced Bouncci and he was now the right-back, while Danilo moved to the centre-back position. The Colombian player received with time to play because Joakim Mæhle was late to press.

The screenshot was an instance in which Dybala already drifted away from the centre, because his initial space occupation did not receive a pass, he went away to vacate the space again. Then, to fill that central zone and offer an option to Cuadrado, Locatelli dropped to help. These kinds of off-ball movements and space vacations were quite important in Juventus’ attacks.

As we mentioned, Allegri had something interesting in his mind as Morata, who played as the striker at Atlético Madrid and Chelsea, now was a left-winger in this 4-3-3. The strengths and weaknesses of this player were pretty clear, of course he was not a conventional wide player who holds width and exploit the outside spaces with 1v1 dribbling. Instead, Morata was more a mobile long ball target and a good partner of Vlahović. 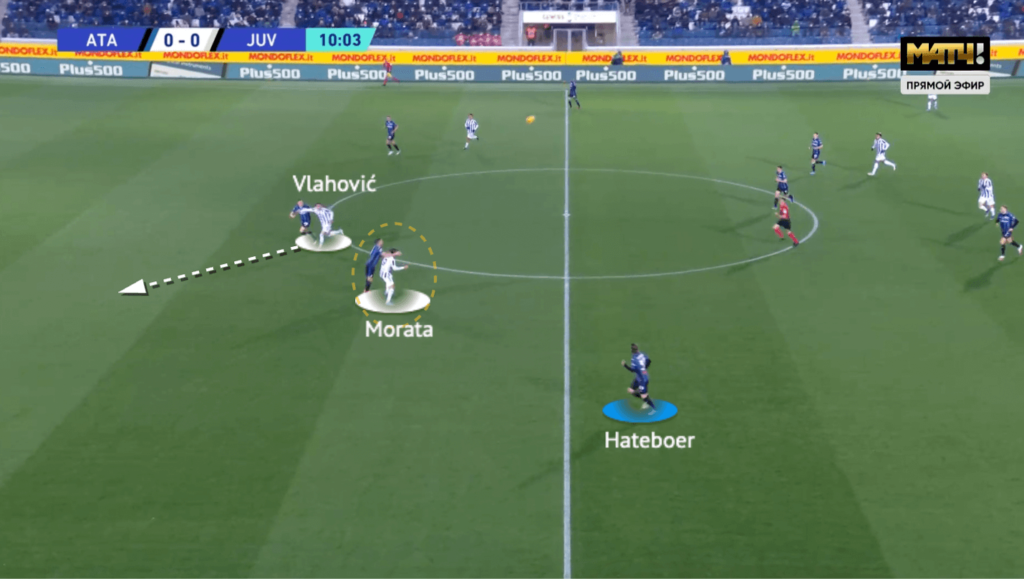 In the first half, Morata was very close to Vlahvoić, serving as the target of longer passes. Juventus intended to exploit the 1v1 situations in the backline because only three centre-backs were left behind when Atalanta pressed. Gasperini instructed his wing-backs to stay a little bit deeper before going out to press as Hateboer’s position suggested, but that only allowed better coverage of second balls in spaces midfield, while the spaces behind was still exposed.

Morata had 19 offensive duels in this game, much higher than the average at 13.48 this season, which showed his importance to the teams’ attack. When he contested the long ball with Tolói, Vlahvoić made a forward run into spaces behind because now he had a 1v1 against Demiral in the high line. 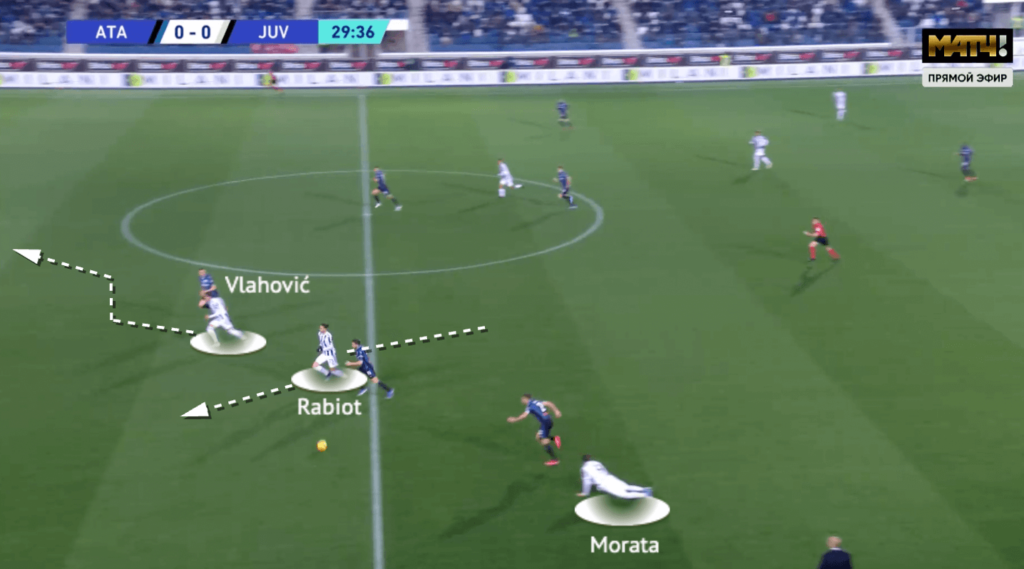 The forward runs of Vlahović were important. Under Vincenzo Italiano, the Serbian striker did not search for attacking depth that frequently, but Allegri utilized his physical qualities in this alternative way. Morata fell down on the ground in this example, however, the attacking condition was created already. Tolói was drawn out into the midfield battle and Demiral was isolated against Vlahović again, with Rabiot making the deep runs from the centre to collect the second ball in spaces behind Tolói. 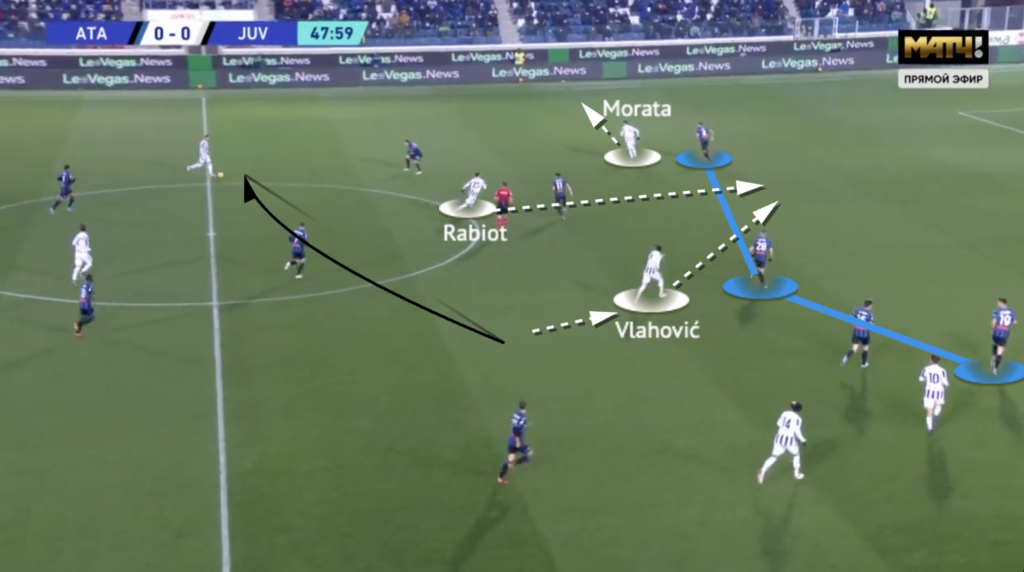 The attacking formation of Juventus maybe was better being described as a 4-1-2-2-1 because Morata and Dybala mostly played in the midfield centrally. Dybala mostly used his 1v1s, techniques on the ball, and creativity to inspire the attacks because spaces were created through McKennie’s run to the wide spaces. Meanwhile, Morata used his movements to create spaces for Vlahović so there were channels for teammates to run into.

The above image shows Vlahović switching the ball to the left side, then running back to attack depth. The gap between Tolói and Demiral was enlarged because Morata moved outside, even knowing that he might not be the receiver. Apart from Vlahović, Rabiot also read that gap and tried to exploit it, but the timing of De Sciglio was not right so the pass did not happen. Anyway, it shows how Juventus wanted to attack Atalanta by deploying Morata as a left-winger.

Although Juventus almost lost all points at the Gewiss Stadium, Allegri’s side has shown visible improvements compared to the beginning of the season, and the arrival of Vlahović catalyzed the process. The energy, movements, and intensity they played were promising. They just had to be more clinical, more lethal in the final third, and improve in some other regards, there were some positives to take.

Atalanta were also good and actually, they almost built an advantage in the top four race, but Danilo’s late goal kept the margin tight. Nevertheless, some rotations on the flanks could be quicker or be carried out at a better timing, so the passing lanes are unmasked at a more appropriate timing for progression. They attacked with better intensity and rate in the second half and that helped the team to generate some threats. It was also a good performance because they showed great athleticism and spirits against the opponents, Gasperini might have wanted more points but one in this game was not bad either.