Last summer, Fiorentina experienced big changes after a mediocre 2020/21 campaign. Vincenzo Italiano from Spezia Calcio was given a two-year contract and the club also recruited good players such as Nicolás González. However, keeping their best player: Dušan Vlahović was also an important task; the Serbian international stayed for another season as Italiano convinced him.

In recent years, Vlahović became one of the most exciting young strikers in Europe. He had 15 non-penalty goals and 21 in total for Fiorentina last season, just behind Cristiano Ronaldo, Romelu Lukaku, and Luis Muriel.

Although Vlahović’s contract is ending in 2023, the 21-year-old striker already announced his decision to not renew the deal. His name also appeared on newspapers as many tipped his next club could be Manchester City, Liverpool, or Tottenham Hotspur. This tactical analysis is a scout report of Vlahović’s strengths and weaknesses, as well as his role under Italiano’s tactics.

The first part of this analysis gives the preferred movements of Vlahović as an individual, and how he used them in different scenarios. 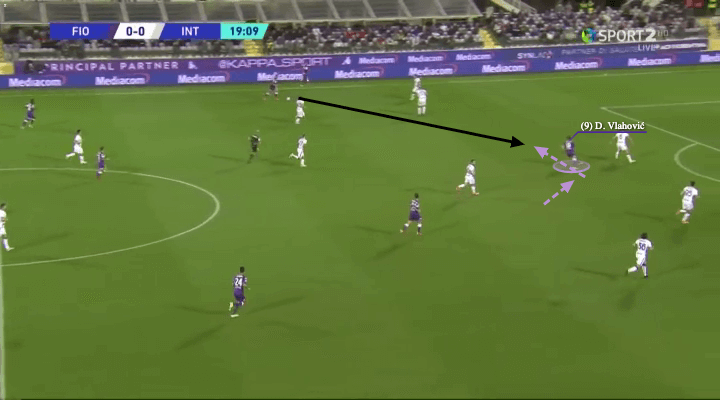 When watching Vlahović’s game, you would likely see him supporting his teammate around the ball. There’s one particular movement he prefers: the diagonal/vertical run from the centre to one direction, bringing the defender with him. Then, suddenly, with a sharp change of pace, he moves laterally towards the ball or half-spaces. You could refer to the move in the first image of the piece. 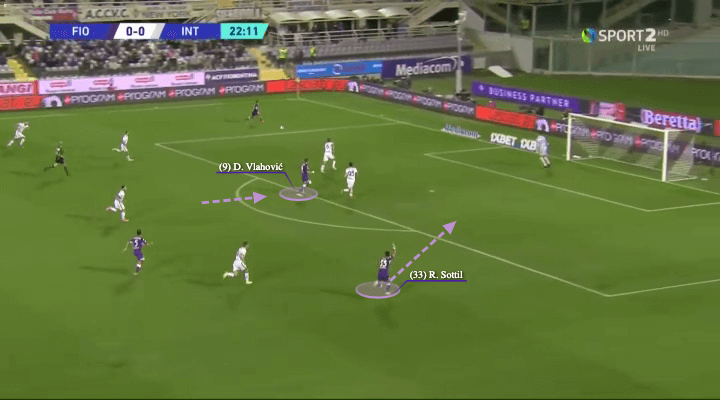 With this “Vlahović move”, he helped Fiorentina to score the opener against Inter Milan earlier this season. The second image shows I Viola attacking the box with Vlahović in the centre and Riccardo Sottil on the right. Initially, the 21-year-old striker was still in the centre, the run was slightly vertical. 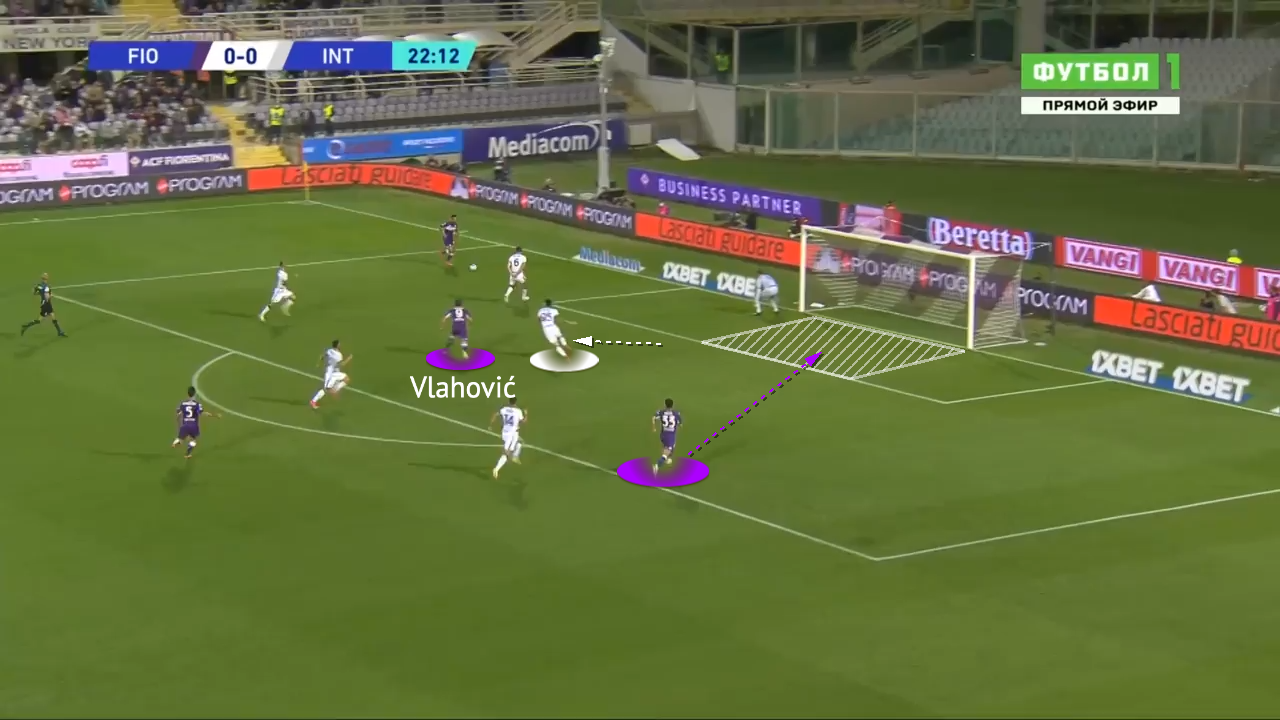 But then, just one second later, from the next image, you could see Vlahović moving towards the ball. The direction of his run has changed, and it forced the Inter centre-back to react. Now, Alessandro Bastoni went for Vlahović to stop him from receiving a cut-back. It was all the sudden change of Vlahović’s move that forced the defenders to make rash decisions.

As a result, the six-yard box was vacated for a cross where Sottil would finish at the end. 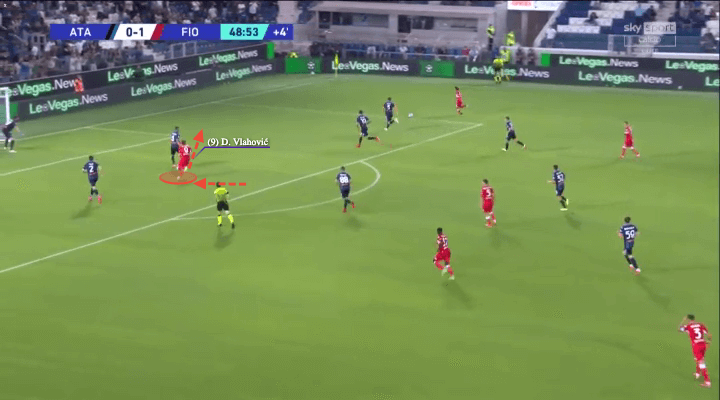 In the final third, Vlahović also used this move a lot to shake the defenders off. From this example against Atalanta, you could see the initial vertical run of Vlahović kept himself on the blindside of the centre-back, who must also look at the ball on the flank.

This positional advantage allowed Vlahović to keep the defender unengaged until he presented himself in front of the opposition, as the centre-back could not see him. 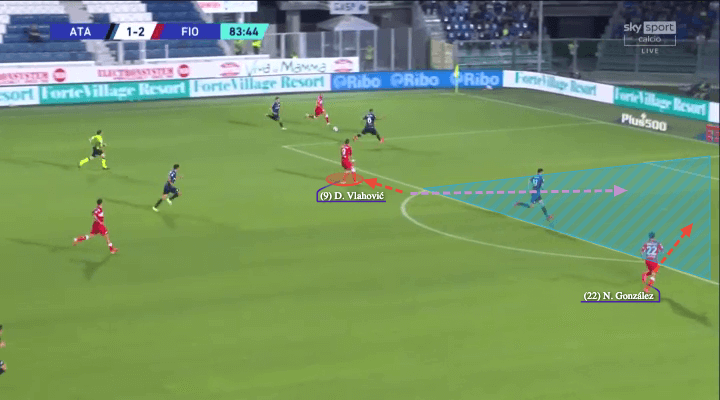 When his team attacks from the sides, the Serbian international tends to move towards the ball to support, expecting a cut-back or a ground pass to feet. However, in some cases, he should attack other areas such as the penalty box, six-yard box, or far-post to look for shooting opportunities.

In this example against Atalanta, I Viola had another scenario similar to Sottil’s goal against Inter. While there was possibly a 2v1 chance to overload the defender in the blue zone, Vlahović made a suboptimal decision by moving away from the centre. Although he could receive on foot, shooting from that position carried a lower threat, and it showed the defender an easy decision to cover González.

If Vlahović followed the purple route, he would have dragged the defender to the front post and opened spaces for González behind. 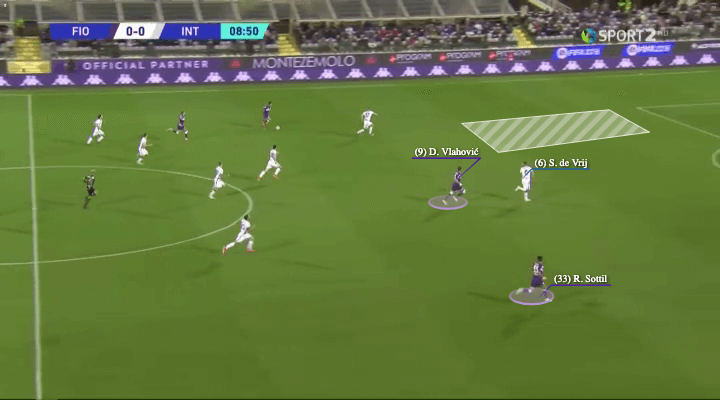 Lacking the awareness to create better conditions for his teammates is also a weakness that limits his performance in the offensive transitions. This occasion against Inter was a very good counter-attacking condition, as Fiorentina now had a 2v1 in the centre. However, it seemed Vlahović did not recognize Sottil’s run and the Serbian striker just went vertical, allowing Stefan de Vrij to guard the central spaces easily.

Instead, he should have run diagonally into the white zone, so the Dutchman must decide whether to follow or not. If he followed, Sottil was completely free on the other side, if he did not follow, allowing Vlahović to receive behind, it was still a 2v1 and a simple cross could send Sottil 1v1 against the goalkeeper. 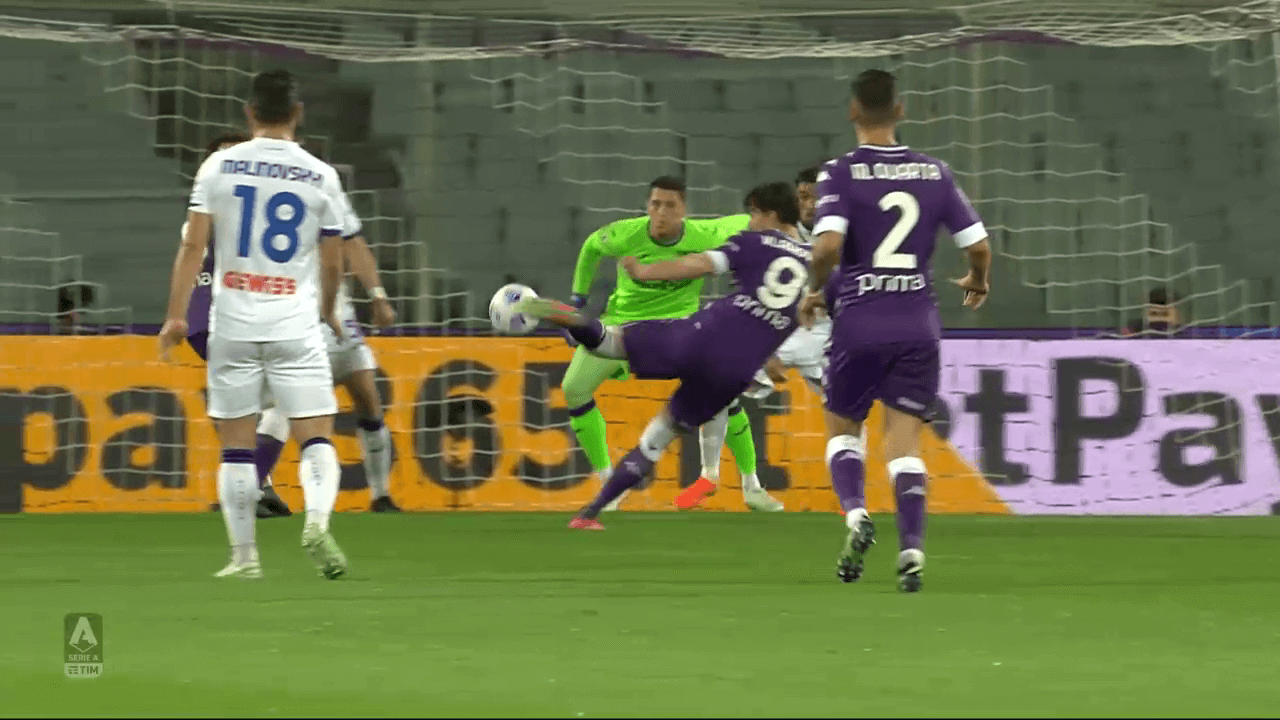 However, we must praise Vlahović’s shooting technique. As a striker, he is very talented; many of his goals from last season were finished with his first touch. Even if the ball was not on the ground, he had good composure to guide the ball into the corners.

The goal against Atalanta was a very good example of that shooting technique. From this image, with a closer look, you could see Vlahović balanced his body with his right foot inclining, which gave him enough room to bend his boot to contact the centre of the ball, and generated enough power to a guided angle into the net (bottom corner).

Dialogue with the midfield

Vlahović is a tall striker, (1.9m, according to Transfermarkt). Tactically, he’s become an important part of Italiano’s tactics. In I Viola’s 4-3-3, he’s the sole striker and always the focal point of the attack. However, he’s not the conventional striker who always goes behind, as he must integrate into the attack and interact with teammates at Fiorentina. 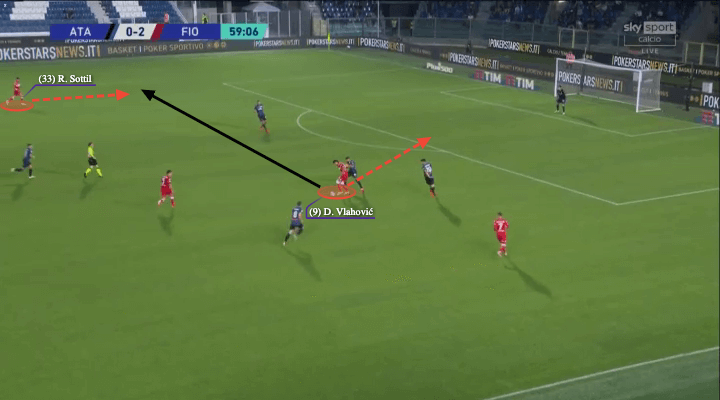 He has several tasks to perform at Fiorentina. Being the focal point of the attack, Vlahović usually has a defender sticking behind, and he should resist the pressure and link teammates. For example, here, he turned when receiving, so he had a better angle to separate the ball from the defender, and find Sottil on the left side. 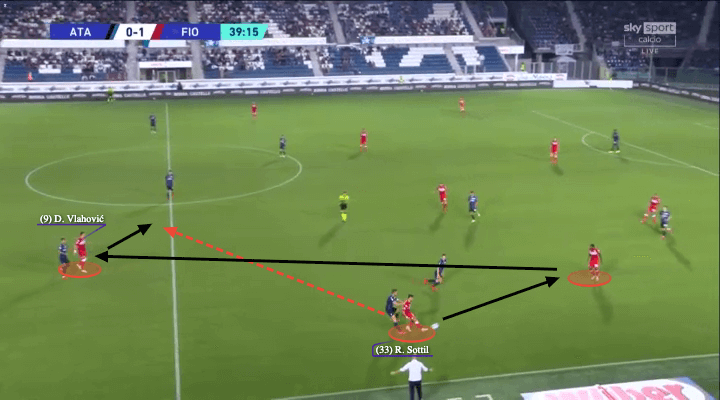 Vlahović’s style also allows Fiorentina to perform different sorts of third man plays in the attack. This example against Atalanta was a vertical third man, beginning from Sottil and Alfred Duncan’s pass. The Serbian international just needed to lay the ball off into Sottil’s path, then turn and run forward to bring the defender away from the ball. 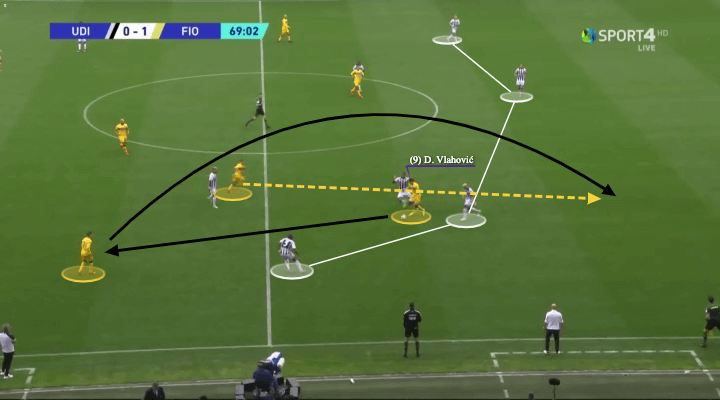 Tactically, when Vlahović drops into the midfield, he is likely to pull the centre-back out of position, this could open spaces behind the defence to exploit. On this occasion against Udinese, his movement dropping into the midfield has pulled the left centre-back out and absorbed the defensive midfielder. The 21-year-old striker would not turn as he knew a simple pass to find the third man was optimal. Then, Fiorentina could exploit the defence by deep runs from midfield as those spaces were opened by Vlahović already. 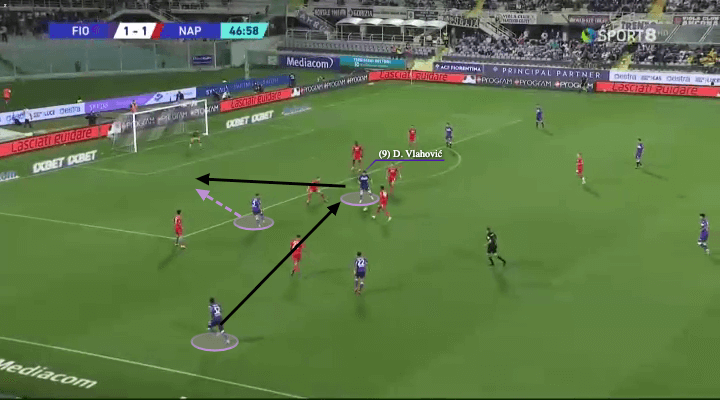 The next set of examples were more about the lateral third man plays. Vlahović supports the ball, so he is often a short passing option when the ball is in the wide zones. Comparatively, the young striker likes to operate on the left side more, as his stronger foot is likely to be farther than the defender.

In this situation against Napoli, Vlahović intelligently offered Duncan a central option where he was between players. This was the same concept, as you could see the right centre-back was drawn out, resulting in spaces behind for the third man (Cristiano Biraghi) to exploit. Vlahović rarely overcomplicates things in these situations. As he is not a competent dribbler, finding the third man is usually the preferred option, such as using a backheel pass to release Biraghi here. 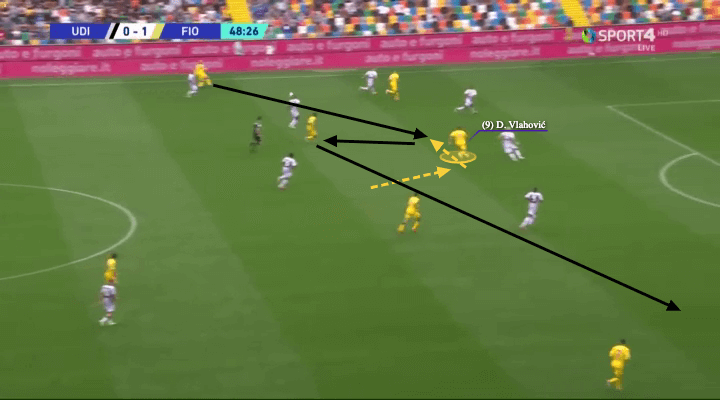 This time, the young striker used the movement we introduced previously to free himself in the half-space. With the sharp change of direction and pace, he bought himself time and space to receive the inward pass, then quickly laid it off to the midfielder. Since the third man of Fiorentina existed differently this time, it allowed I Viola to attack in different directions. This situation led to a switch to the opposite flank. 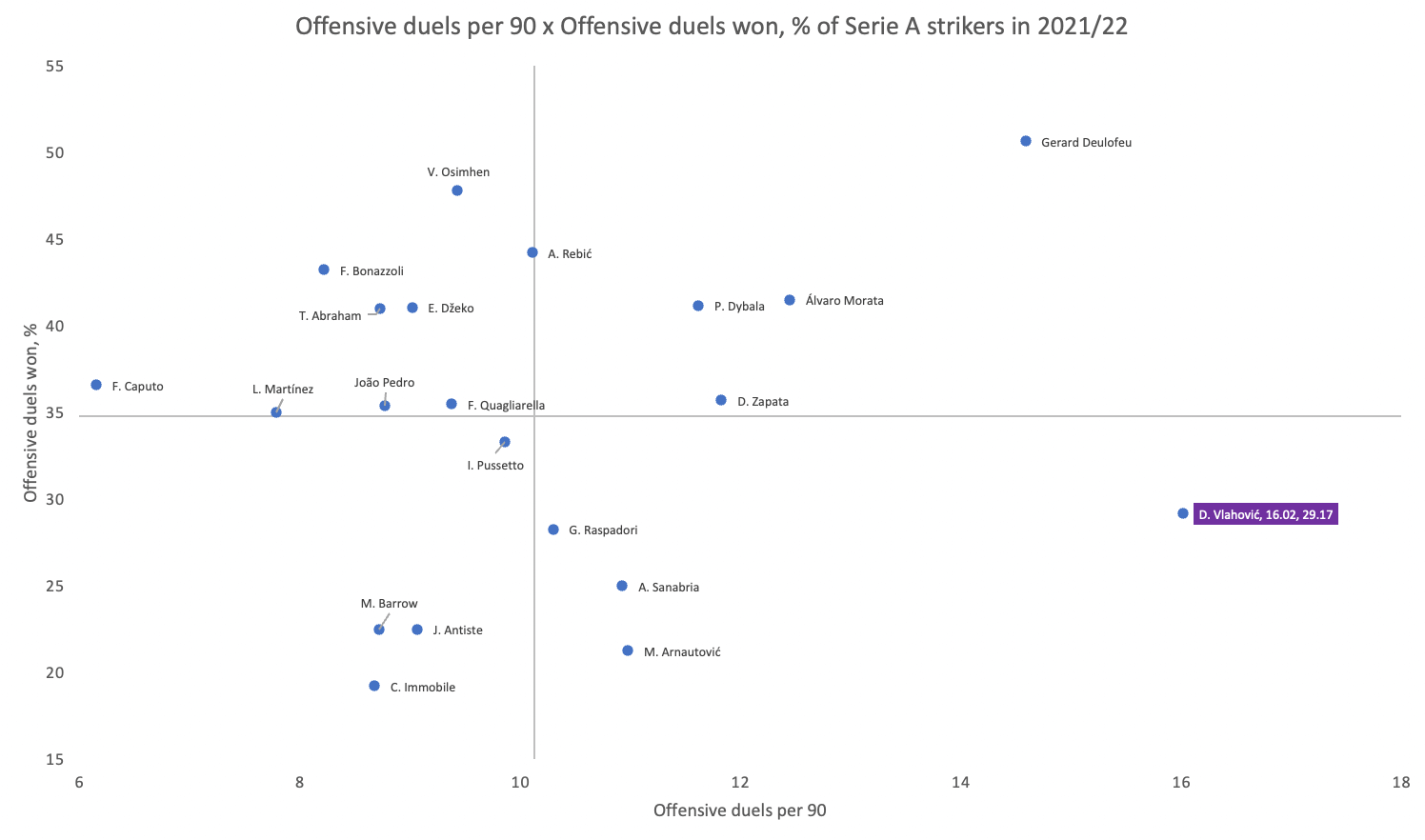 Although Vlahović is recognized as the focal point of Italiano’s Fiorentina, he must continue improving his ability to keep the ball and resist pressure from behind. Specifically, Vlahović is not fully utilizing his body to separate the ball from the challenger

Of course, he is still at a very young age and there is time to develop, such as learning from Lukaku’s performances.

Even though Italiano was famous for his intense pressing style at Spezia, and he’s continued using a 4-3-3 man-oriented system at Fiorentina, Vlahović’s defensive duties are limited. It seems the 43-year-old head coach wants to reserve his best player for the attack. 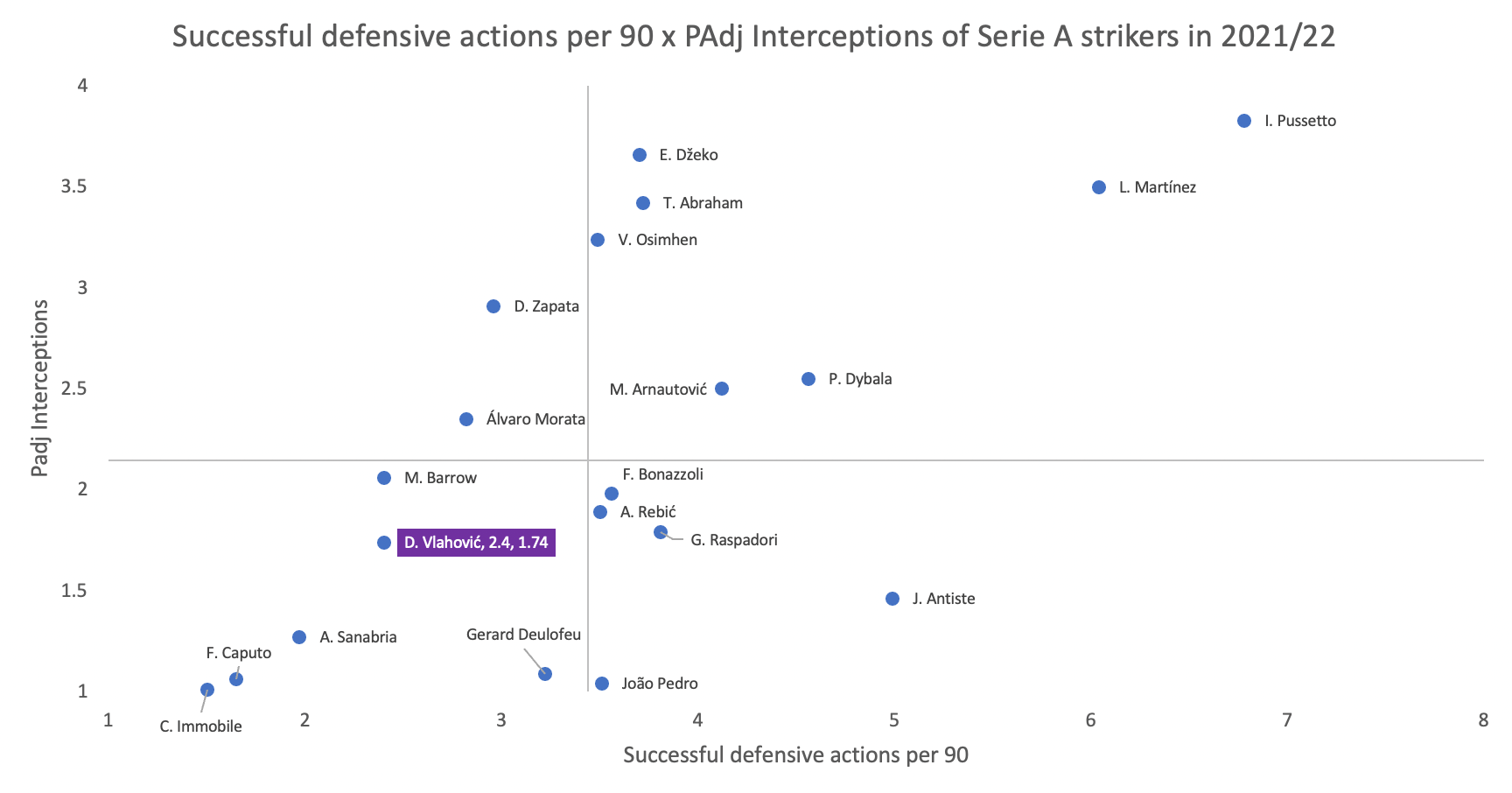 We pulled the data from Wyscout and concluded the defensive contributions of Serie A strikers in this scatter chart. Vlahović’s name appeared on the bottom left quadrant in terms of PAdj interceptions and successful defensive actions per 90.

Vlahović’s PAdj interceptions is 1.74 and he has 2.4 successful defensive actions per 90; his defensive outputs were below the mean. Comparatively, strikers such as Lautaro Martínez are hard-working defensively.

But it is conceivable that Vlahović’s defensive contribution is not high in terms of numbers. As mentioned, Fiorentina defend in a man-oriented manner and intend to recover possession in the central third. Hence, the striker rarely leaves his target to double-press or make contact with the opposition.

Therefore, it can be concluded that Vlahović might need to further improve on his defensive work at his new team, as pressing is a very important part of modern football. Being the striker, he would need to learn pressing concepts such as the trigger to press, pressing the stronger foot, the angle and body orientation to cover, and more.

Our analysis has detailed the strengths and weaknesses of Vlahović. The 21-year-old Serbian international is a very talented striker, who has the potential to be the focal point of the team’s attack. Nevertheless, he must keep improving to develop his tactical awareness and techniques to survive in a more competitive environment. But given his 100+ professional appearances at a young age, surely bigger clubs will come for him and Fiorentina may let him leave if the money is there. 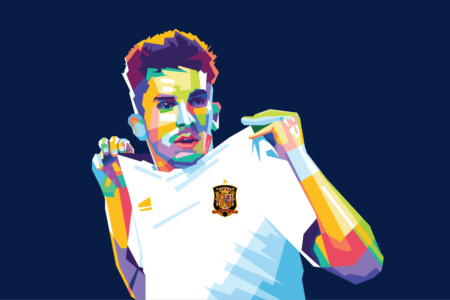 Going into the World Cup this year, Spain want to recover from their 2018 setback at the Russian World Cup, […] 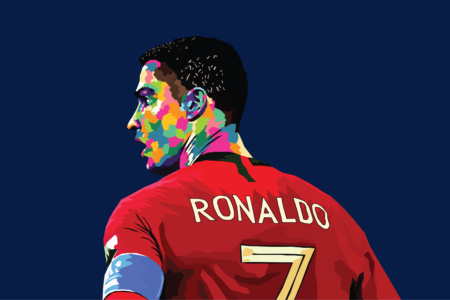 Having one of the best generations in their history, Portugal have qualified for the 2022 World Cup via the playoffs […] 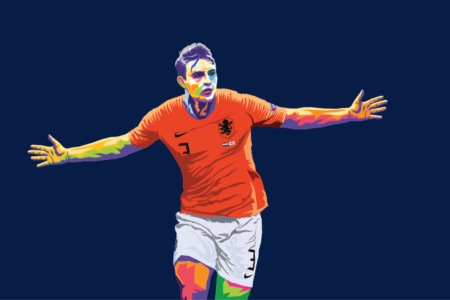 Commonly known as ‘The Clockwork Orange’, the Netherlands have become one of the most significant teams in World Cup history […] 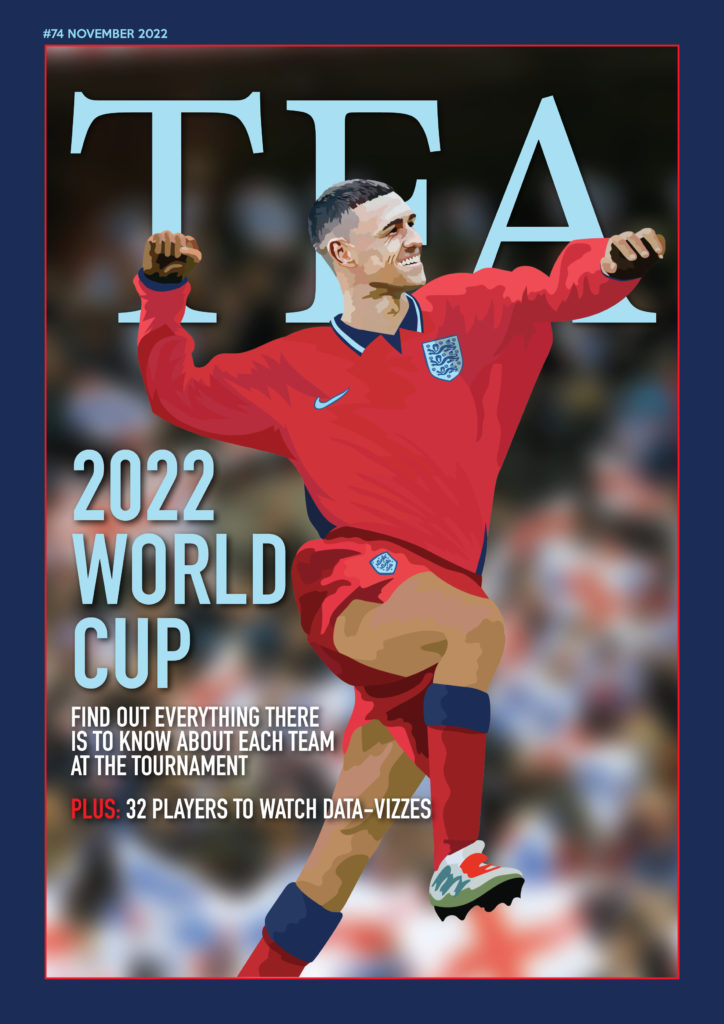