The round of sixteen in this year’s UEFA Champions League saw Tottenham drawn to play RB Leipzig, with both sides in contrasting states at the moment. RB Leipzig currently sit second in the Bundesliga just a point behind leaders Bayern, while Tottenham lie fifth in the Premier League. The tie set up not only this clash of clubs but a clash of two coaches, Julian Nagelsmann and José Mourinho, with this an excellent chance for Nagelsmann to showcase his tactics at a high level. As this analysis will show, Leipzig and Nagelsmann did just that, and dominated the game on the whole, and in this tactical analysis, we will look at Leipzig’s offensive structure in detail, and highlight why they were able to dominate Tottenham.

Tottenham lined up in a lineup that was probably expected due to injuries, with the side taking on a mostly defensive approach in the game. Leipzig stuck to the three at the back they have played in recent weeks, with the formation flickering between a 3-4-1-2 and a 3-4-2-1, with Werner having lots of freedom within his role to occupy certain spaces. 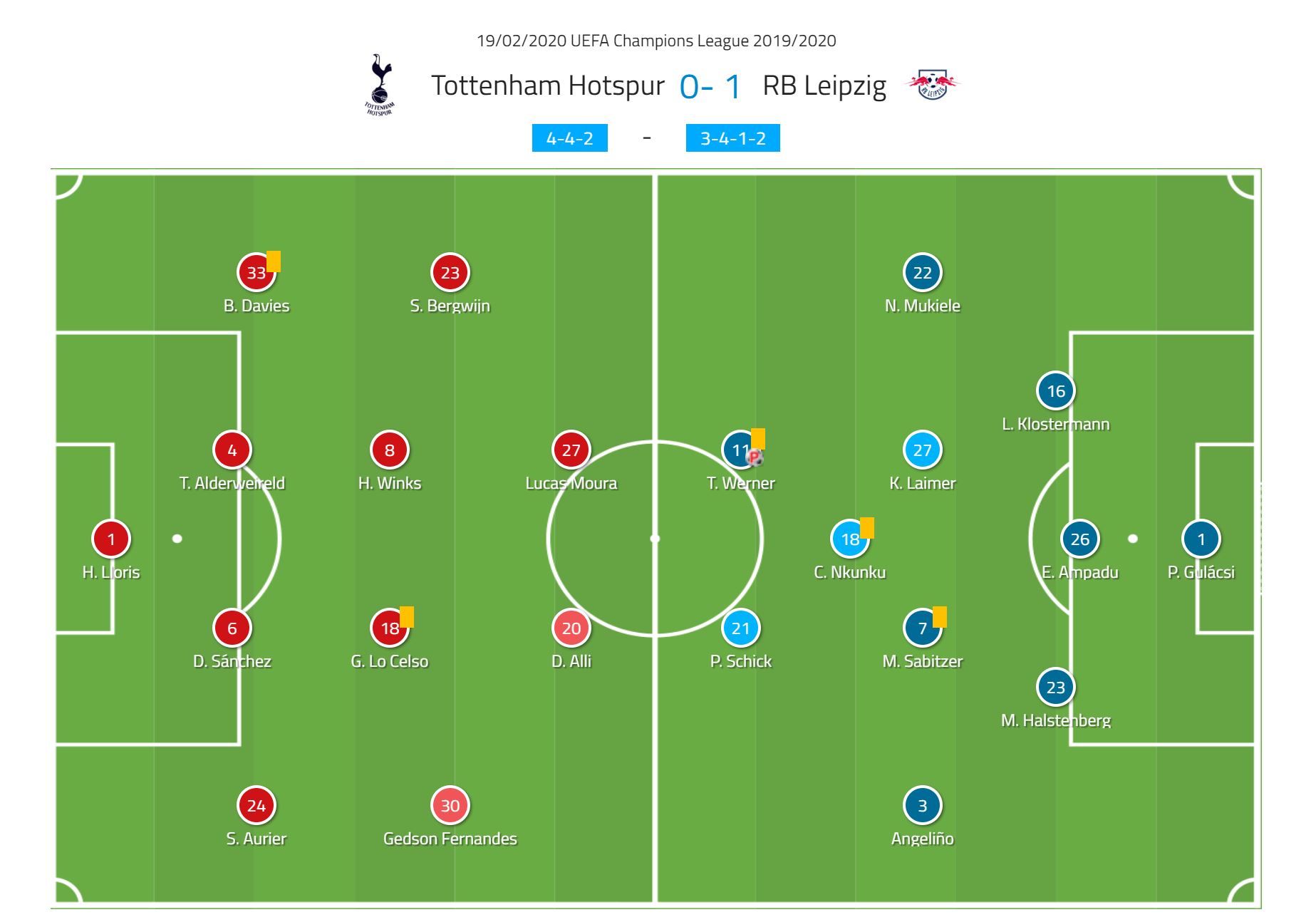 We can see Tottenham’s fairly defensive structure below, with them playing a flat 4-4-2. The most interesting point of this 4-4-2 was how it pressed against Leipzig’s back three. With a 3v2 along this first line, Tottenham would struggle to press, and so Tottenham sat deeper. However, you would usually still expect pressure on the central player and another centre back to prevent vertical passes down the middle being played, but this wasn’t the case.

Instead Tottenham stuck to this structure seen below, the front two fairly wide and usually on the widest centre backs. This was presumably to look to prevent Leipzig building down the wider areas. 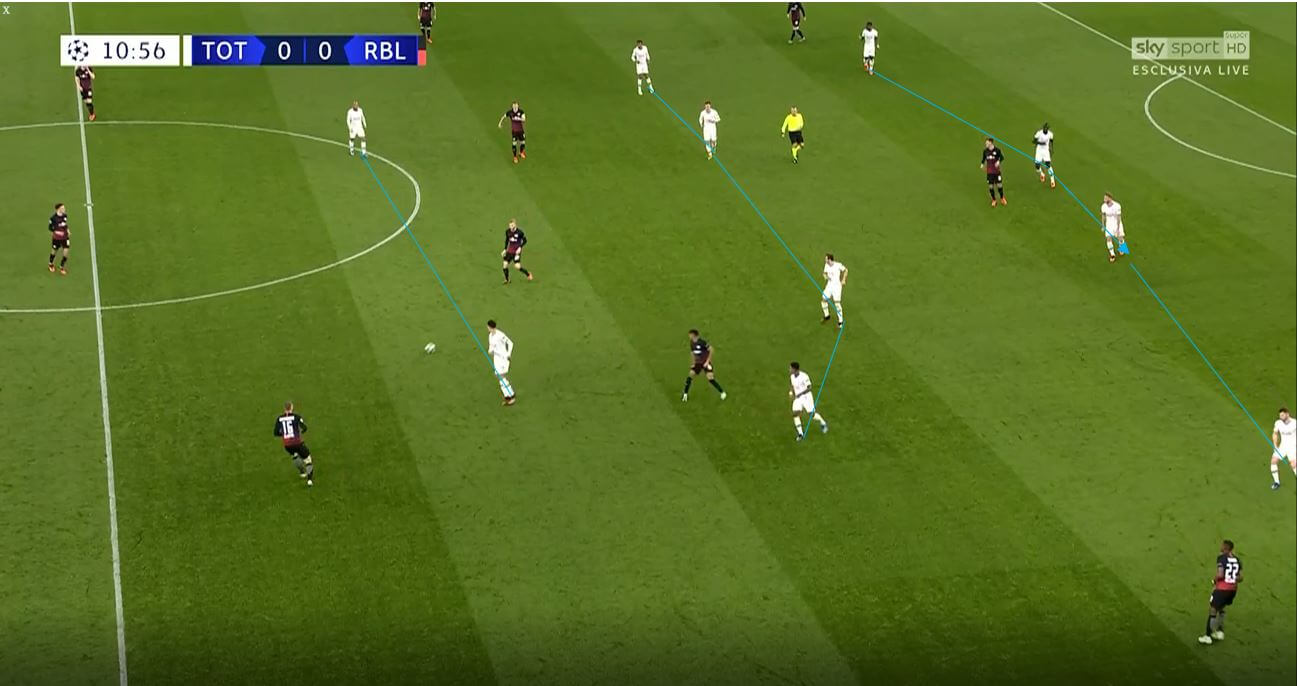 This left a lot of space for the most central defender, Ethan Ampadu to play in, and the Welshman had an excellent game. We can see an example below of one many Ampadu’s simple forward runs into the empty central area, where he can then pick a pass into one of Leipzig’s players between the lines. In this next section, we’ll cover how Leipzig occupied space to maximise these opportunities to get behind the lines. 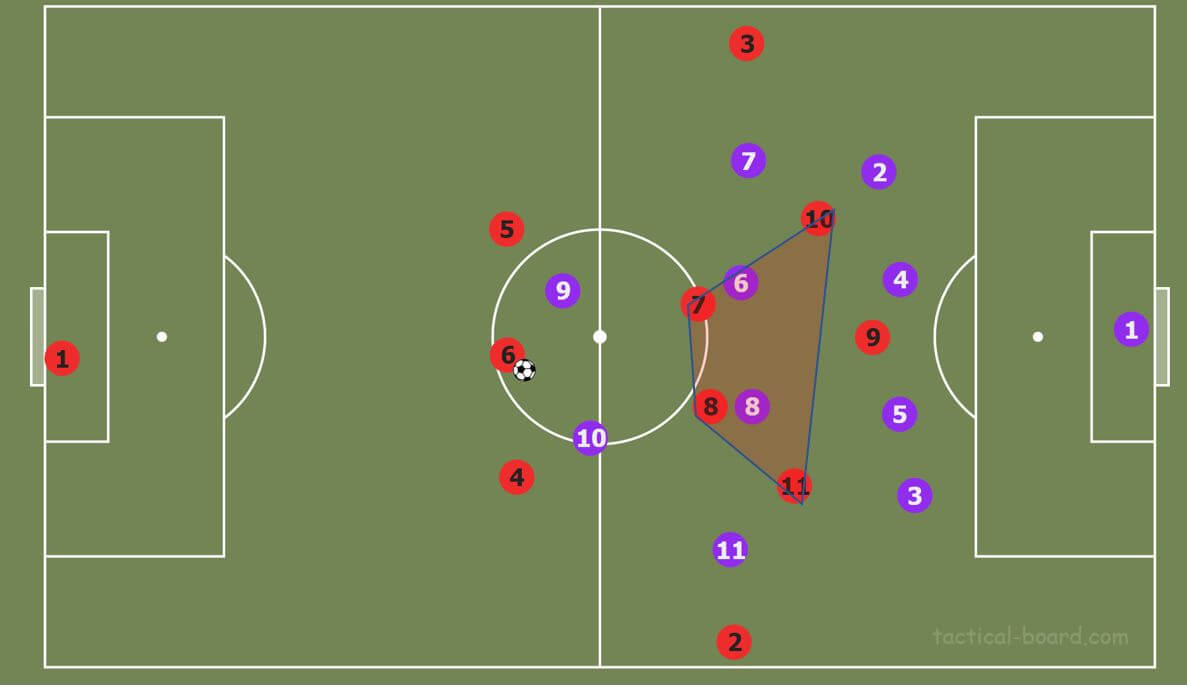 Therefore to effectively complete this concept, central midfielders need to be aware of where their opposition counterparts are, and as a result, we saw Konrad Laimer constantly scanning for the position of his marker Harry Winks, in order to get onto the same vertical line as him and occupy him.

We can see here just a few seconds later, Laimer is now on the same vertical line as Winks, with both Timo Werner and Christopher Nkunku dropping into the half-spaces and looking to receive. The left-sided central midfielder Marcel Sabitzer is slightly too far over, which reduces the space for Timo Werner in this example.

We can see here a better example with good spacing from Leipzig. Sabitzer makes a movement from near the half-space area inwards toward the centre on a diagonal, and Lo Celso adjusts his movement to deal with Sabitzer. The passing lane to Werner is then open and he can receive the ball.

Although not strictly a box concept, we can also see a similar concept which happened several times within the game. Instead of occupying the half-spaces, Nkunku would move into a more central position, and the two central midfielders would drop wider at angles to receive, which left the passing lane down the middle open for Nkunku to receive in. From here, Werner would often help create an overload on one of the wings.

The role of Werner

Timo Werner was given a freer role in the team, which changed depending on the position of the ball and the way it was progressed. As seen above, at times Werner would take up a role within the midfield box and occupy the half-space, but he would also often start in extremely wide areas and then make quick inward movements in order to overload the full-back, as we can see below, where he rotates positions with Angeliño.

We can see here, with the ball moving wide, Werner pulls wide also, stretching the full-back and the back line, and potentially opening up space in the half-spaces for him to run onto, as we can see in the next images. 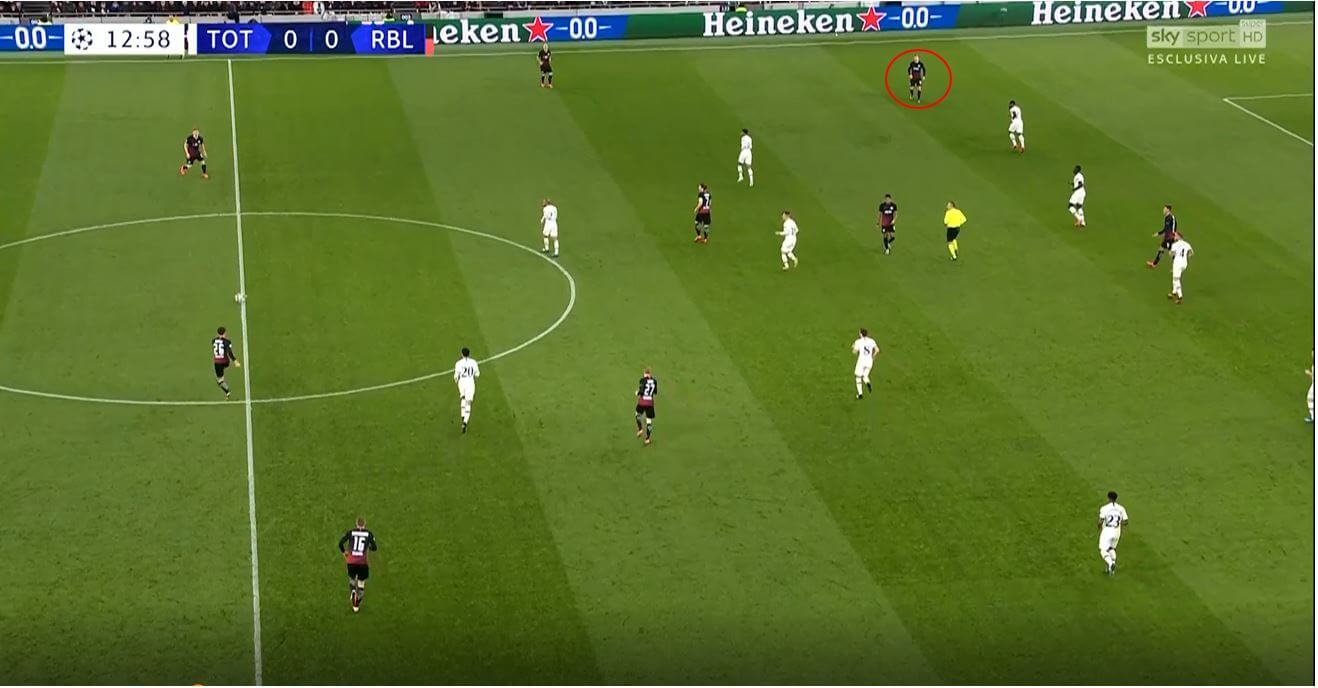 In the build-up to the goal we see a similar structure as the image above, just in a higher area. Werner starts wide as the ball is played into Patrick Schick in the half-space. Werner then makes a quick, well timed run into the space behind Schick to provide vertical support and penetrate the centre. Leipzig are able to create an overload on the other side, and they win a penalty and score.

In one final example here, we can see again Werner occupying the full-back, and an overload is created and Leipzig create a goal-scoring opportunity.

Great offensive structures have to be balanced

One reason I was so impressed with Leipzig’s offensive structure was the balance that it allowed for and therefore Mourinho’s usual counter-attacking threat was nullified. Simply, with the two central midfielders usually sitting centrally to create space, Leipzig were always in a structure to immediately counter-press from the front and stop vertical passes, and were also able to restrict space in and around the ball carrier, often forcing Tottenham to kick the ball long aimlessly.

We can see the same principles being applied here, with Leipzig immediately counter-pressing in high areas once the ball is won, with immediate pressure on the ball and nearby passing options cut out, meaning Tottenham can only go long if they want to minimise the risk of being dispossessed.

On the whole Tottenham’s offensive structure was pretty poor, and they struggled to progress the ball down the wide areas as they looked to want to. This was often due to a lack of a focal point in the attack, with many attacks relying on straight passes down the line, with no players offering central support or occupying the half spaces to create space on the wing.

We can see again here, the winger provides lots of width and increases the size of the half space, but there is no occupation and the winger can do nothing but play the ball backwards.

Later in the game, Tottenham did start to have slightly more success, which was due to them now having a focal point to their attack that they could play into and then off. The full-backs would often progress the ball and then make a forward movement to receive again.

Again here, a focal point is provided and Spurs are able to progress the ball through a full-back. These situations were few and far between however, and only came about as a result of Leipzig’s willingness to drop deeper, which isn’t something I would expect too much of in the second leg early on.

Overall, RB Leipzig got what they came for in an away goal, and will perhaps be disappointed they only picked up the one. Tottenham couldn’t get a goal in the game despite some promising opportunities in crossing areas, but overall the result was a fair one. With Tottenham now needing at least one away goal in the second leg, it will be interesting to see what approaches both coaches take.