Canadian football has produced some wonderful talents in European football of late and we have witnessed the quality of Canadian players like Alphonso Davies of Bayern Munich. In this scout report, in the form of tactical analysis, we will be looking at Jonathan David, one such talent who has been performing exceptionally well ever since he started facing the European Challenge.

In this analysis, I’ll be analysing his standout qualities to show where he performs so well at such a young age, along with tactics and the areas in which he can work to improve himself.

The 21-year-old striker moved to Europe in 2018, joining the KAA Gent U21 team from Ottawa ISC. In the same year, he moved into the first team and had two wonderful seasons. During his first season in Belgium, he played 23 matches (1136 minutes) and scored eight times while assisting twice. The next season was even better where the player found the back of the net 18 times and assisted eight times in his 27 matches (2101 minutes) which saw him secure a move to Lille. 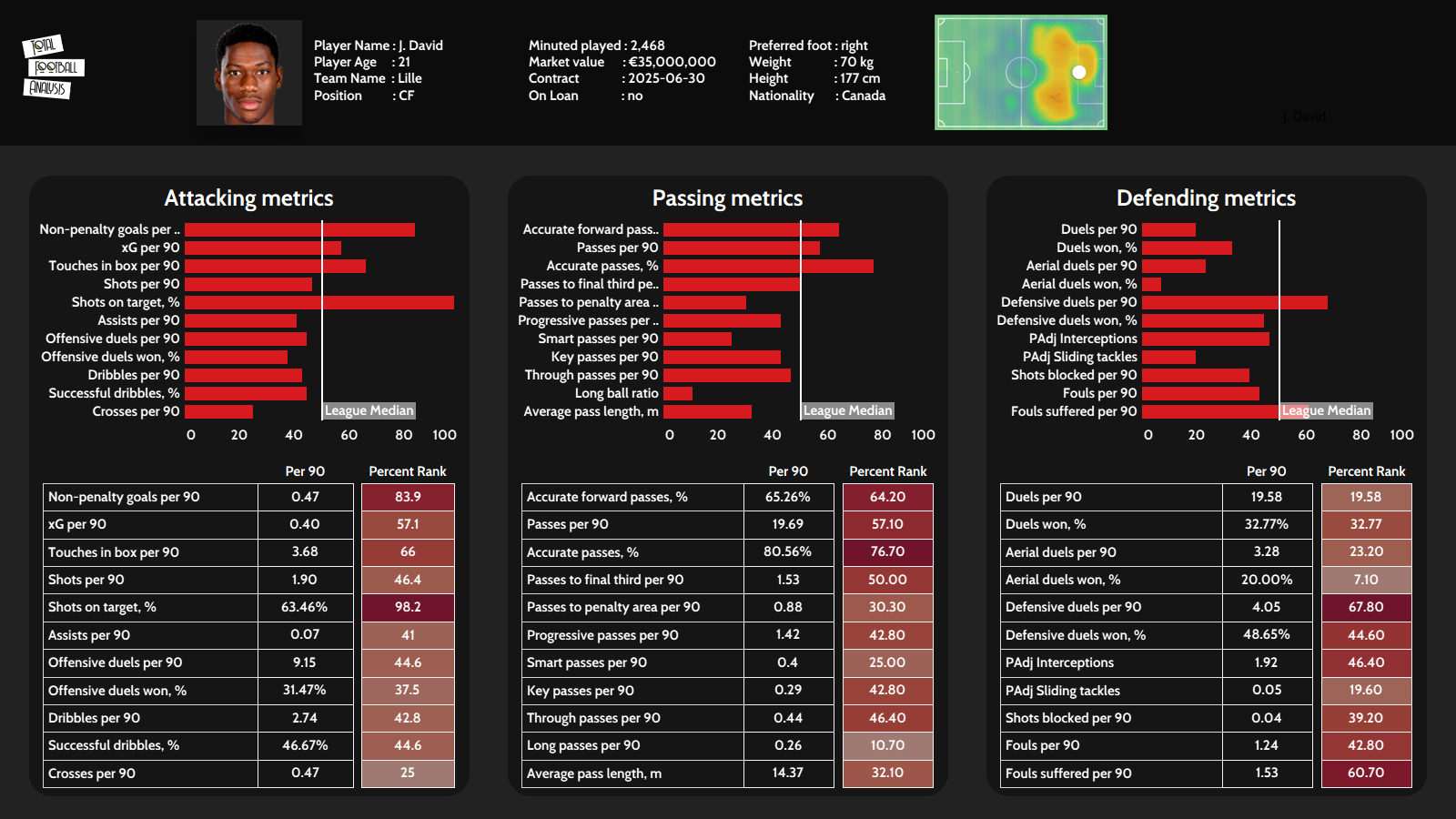 In his debut season in France with Lille, the player scored 13 times while assisting thrice, helping his team to win the league. Upon looking at his player profile, one can see that the player has a very good goalscoring ability, as he averages 0.47 non-penalty goals per 90.

From his heat map, we can also see the areas in which he operates. One thing that needs to be noted is that in Belgium, the player was more of an attacking midfielder used in a 3-4-1-2 formation, whereas at Lille, he’s used as a centre-forward/striker in a 4-4-2 system. How the player was able to adapt to a change of system at such a young age is something we will discuss in the next section and I’ll also be explaining the reason behind his numbers and what behaviours of his influence his performance and data.

As mentioned earlier, he was deployed as an attacking midfielder while at Genk, whereas at Lille, he played in a 4-4-2 formation as a striker. The reason behind his quick adaptation to the change in the system was the similar roles that he plays for both teams.

One who has seen his play for Gent can observe that David operates right outside the penalty area behind the two strikers. His role is similar at Lille where he’s playing behind one striker instead of two. Due to this, the player has an added responsibility of also being inside the penalty area when required and also has the freedom to drift to either flank. 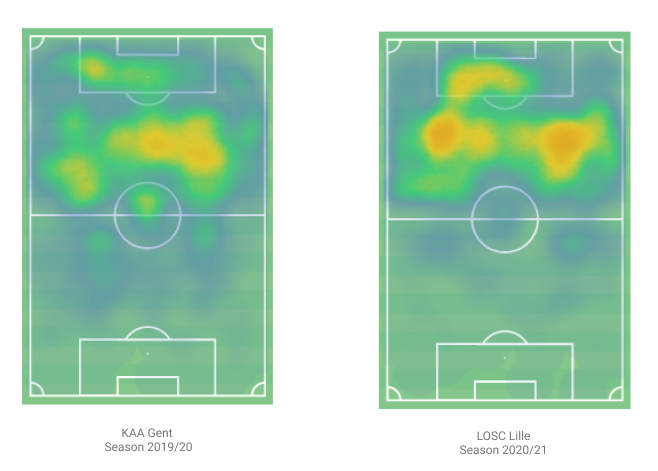 This role is the reason why he sees fewer touches inside the penalty area per 90(3.68) and has fewer shots per 90(1.90). But it’s worthy enough to note that the player’s shot accuracy (63.46%) is among the best in the league for players who have played more than 700 minutes, explaining the player’s quality in terms of finishing/converting chances.

The player has been able to mature his game at such a young age with some very good qualities. Attacking the space is one such quality that he possesses. Although he plays as a second striker, there are times, in rotation, where the player takes the responsibility and is able to create his own space. 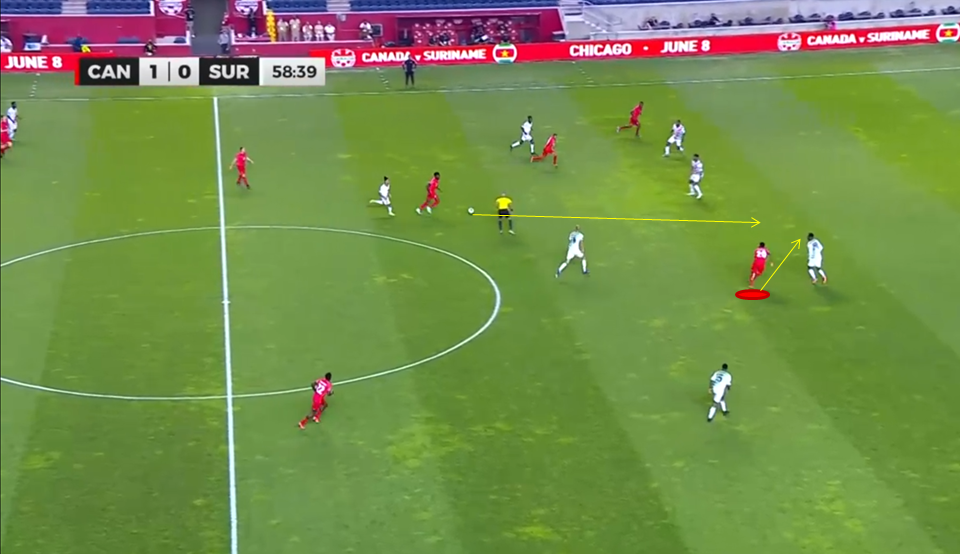 Upon being able to spot the gap in a disorganised defence, David is quick to attack the space and show movements in that direction. The fact that he moves from the nearby defender’s blindspot delays the defender’s movements and David is one step ahead of the opponent.

The fact that he’s very fast also helps him to stay ahead of the opponent. He’s got a very good eye for spaces and the ability to exploit them. He’s also capable of creating this space for himself when there’s little space or when he’s marked tightly.

In confined spaces, where spaces are difficult to spot, David’s movement helps him to create space for himself and for his teammates to exploit. 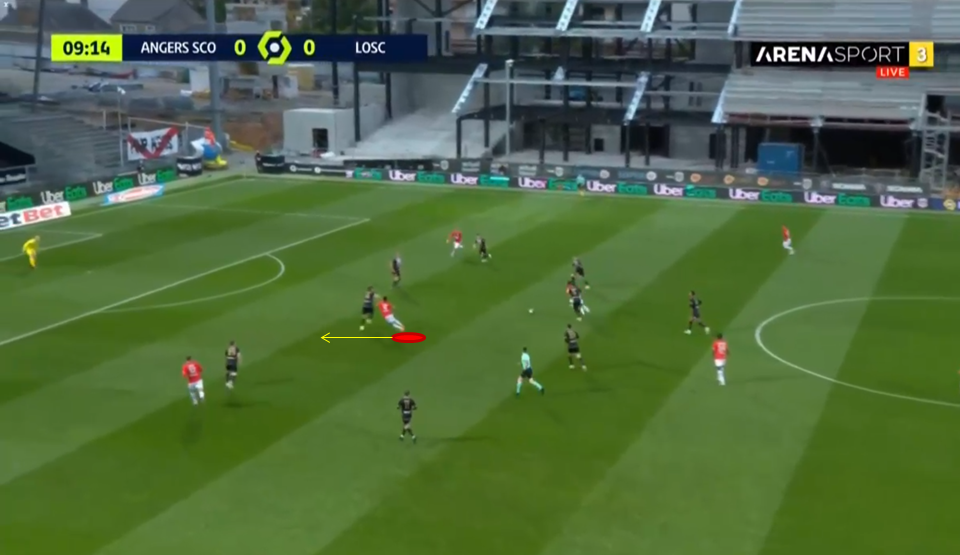 In the match picture, we can see David quickly changing his direction, making him unpredictable and also creating space for himself by forcing a fake run. On running along with the defender, he gives the defender confidence that the player is marked and under control. Right when the defender thinks everything is under control and looks away to the ball progressor, David instantly changes his direction.

This makes him unpredictable but also explains how spontaneous his decision making is in the final third as a striker. This ability of his to create space for himself and the team helps in other situations of the match too.

Being one of the fastest in the team, David is a very good asset in terms of counter-attacks. Along with his speed, his movements are also very crucial. In counter-attacking situations, David stays up front, being ready to quickly move if there’s a successful counter-attack. Being the frontline attacker in a counter-attack brings a huge responsibility. 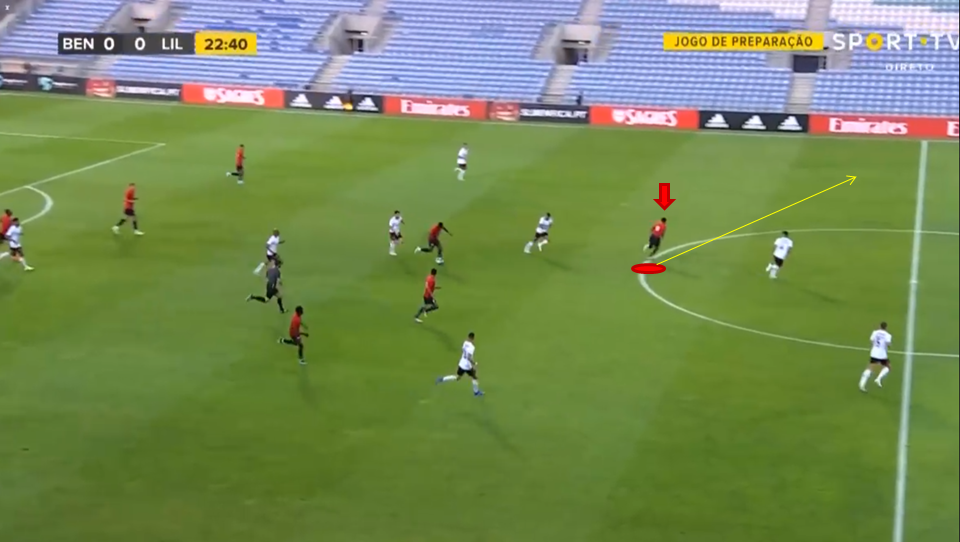 The first pass in a counter-attack is very important as it’s got to be into space. In the picture, we can see David running towards the flank, rather straight, into the penalty area which pretty much explains what he’s trying to do. He’s trying to create room for himself in order to receive the next pass and, at the same time, create space for the ball progressor to carry it further as this run may force the defenders to follow him.

Either way, he creates value for his team through his movements. This explains how influential off-the-ball movement is when attacking.

David has a strong mentality and a very good anticipation level. His reflexes and decision making are spontaneous. Quite a number of his goals in Ligue 1 were scored after winning the second ball. 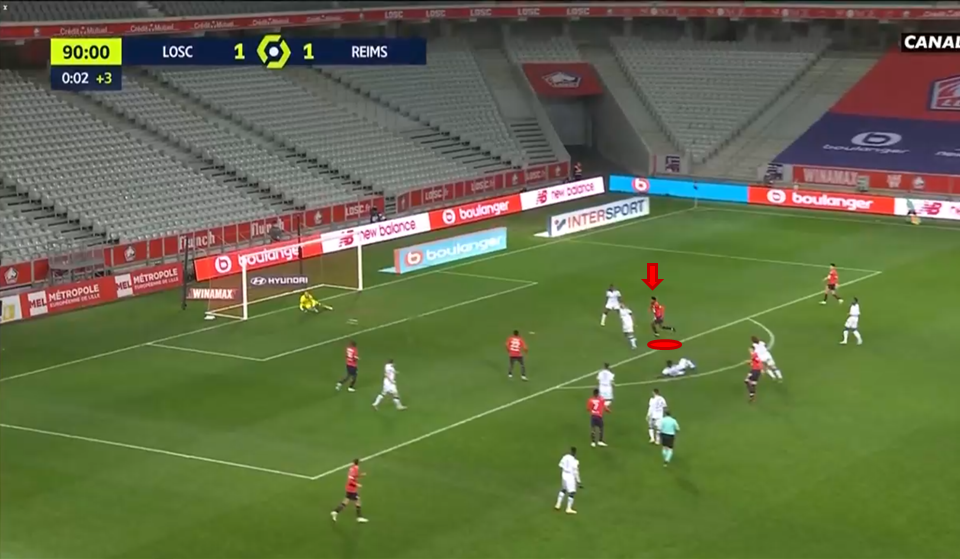 In the image, we can see that all of the players on the pitch are standing and waiting to see the result of the shot taken by a player from Lille, whereas David is the only player sprinting towards the goal, expecting a rebound from which he can score.

One can also notice that this situation took place in the final few minutes of the game which supports his strong mentality.

It’s astonishing that the player is only 21 years old, yet is already playing a mature game and having a positive influence on the team. It’s no wonder why prestigious and wealthy teams like Liverpool are keeping tabs on this young sensation.

With all of that being said, there are still areas where the striker needs to improve in order to become a better version of himself. In terms of goalscoring ability, there’s no doubt that the player is a standout and is very reliable in terms of converting chances. It’s the other traits of a striker that he needs to work on. 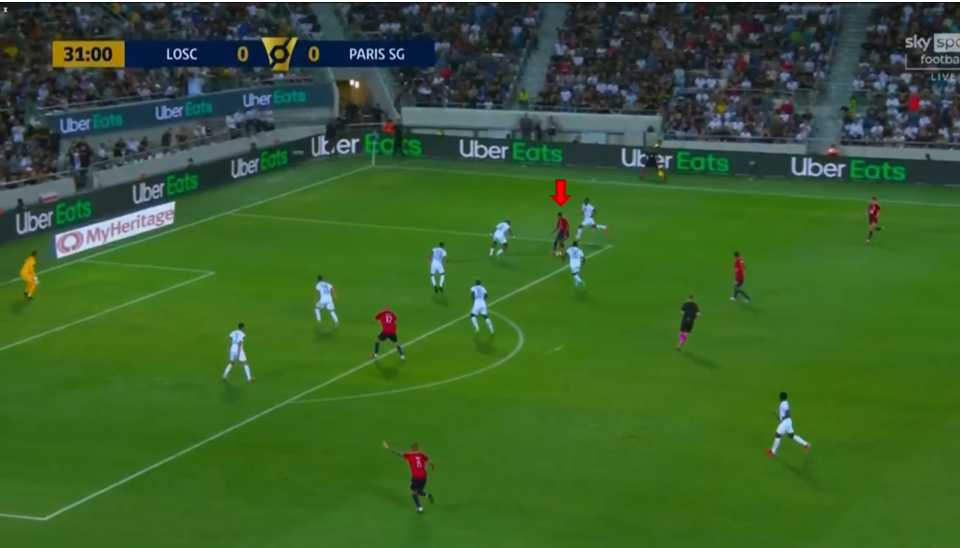 One such trait would be the ability to take on defenders. There’s no doubt that David is a very good dribbler but the player needs to make use of his pace and talent to win a lot of offensive duels in the final third. He, on average, wins 31.47% of his offensive duels and stands in the 37th percentile in his league among the other attackers.

It’s also very common that he loses possession while dribbling as he lacks experience in knowing when to release and when to hold onto the ball.

As a second striker, David drops deep and combines well with the other midfielders and he carries the ball forward. 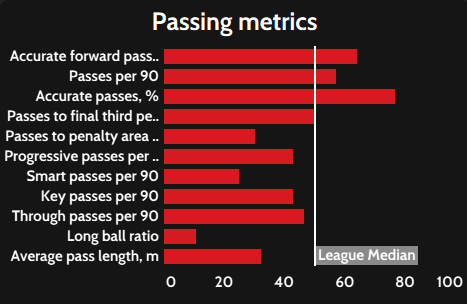 Although the player is a reliable passer, holding an average of 80.56% in his pass accuracy, one can see from the bar graph that he falls short in terms of creating chances or danger through his distribution. This is something that he lacks and needs to work on. Shown the trust from the team, it’s important that he takes his chances and doesn’t worry about losing the ball.

At times, his link-up play is also a bit of a concern and needs to be worked on. These are a few traits that the player must work on in order to become more influential and an even better player.

If the player manages to keep his foot on the ground and if he constantly improves, he would turn out to be one of the best strikers Canadian football has ever produced.