Ever since Nerijus Valskis’s move to Jamshedpur FC was confirmed, the entire Chennaiyin FC fanbase was curious to know the identity of the new striker for the team. Anyone who had watched the Indian Super League last season would know the role and value of Valskis at Chennaiyin and how important he was in their road to the finals, and recruiting a player to fill the shoes of Valskis was pretty much close to an impossible task.

In this tactical analysis, we will be looking at Jakub Sylvestr, the Slovakian footballer who now plays as a striker for Chennaiyin FC. The 31-year-old has only found the back of the net one time in his 11 appearances so far, leading to many people questioning his contribution to the team as a striker. Since people are questioning his recruitment, we would be analysing in detail if Sylvestr is filling the shoes of Valskis or not.

Jakub Sylvestr is an experienced striker who has played for 13 different teams before joining Chennaiyin. He has also played in both the UEFA Champions League and Europa League previously and has made the highest number of appearances for Slovan Bratislava and FC Erzgebirge Aue in the German Bundesliga (second tier). 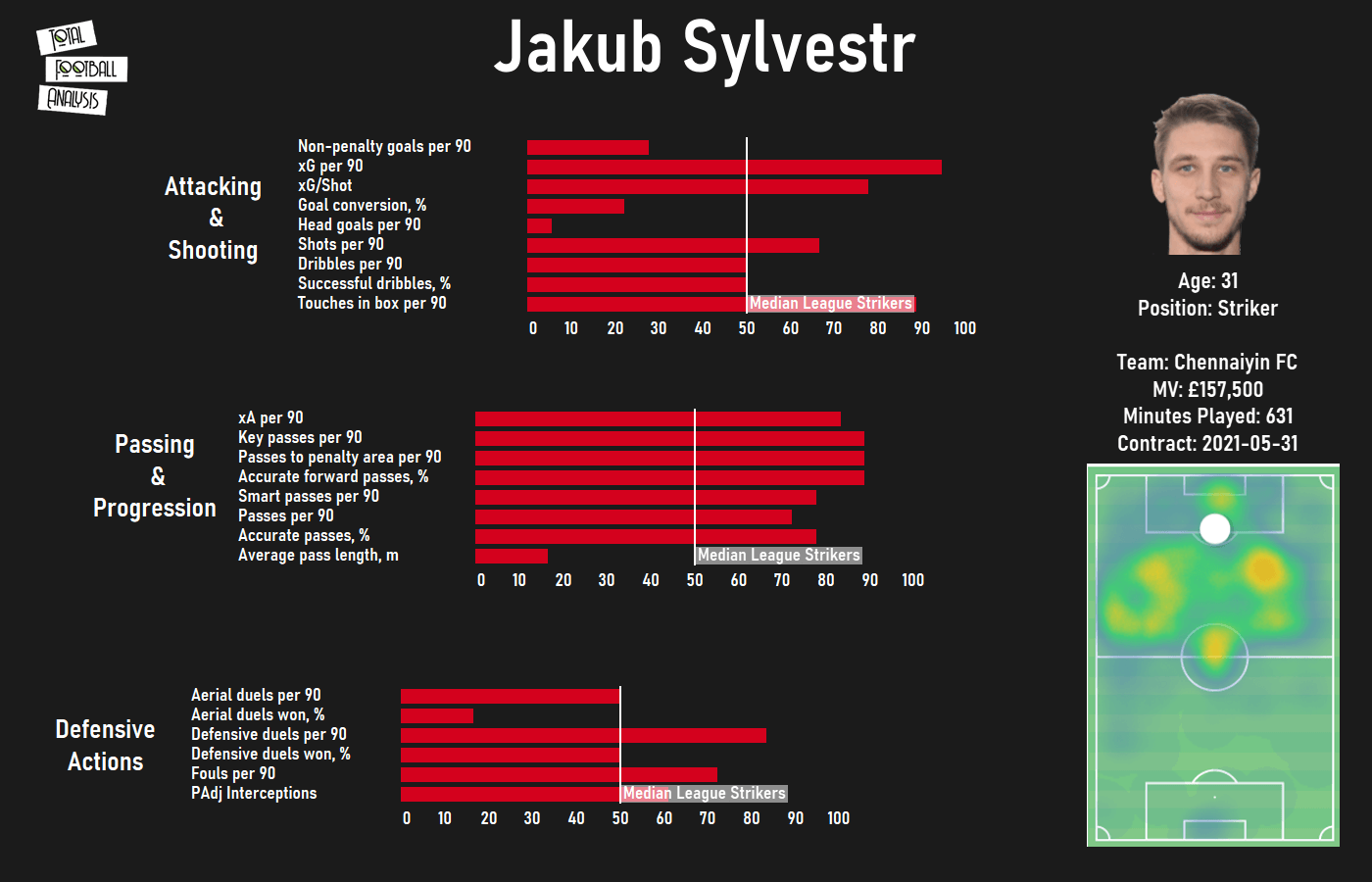 Looking at his heatmap one can notice the fact the Sylvestr loves and prefers to operate in the opponent’s half. Analysing the attacking and shooting metrics of his we see that he stands out for xG per 90 but has a very low goal conversion rate, which is perhaps an indication that he is not a clinical finisher, even if he gets into good goalscoring positions. His passing and progression look convincing as he has managed to perform very well when compared to other strikers in the league. His defensive actions too are convincing and explain his work rate in the game.

In the following sections, we will be comparing Sylvestr’s stats from this season to Valskis’s stats from the previous season at Chennaiyin and analyse where he’s lacking and performing better. We will also try to reason out the factors influencing his stats and also look at his tactics and behaviour on the pitch.

The first criteria we will be looking at is the player’s attacking and shooting ability. In this section, we would compare their performance and try to figure out the factors behind the numbers. 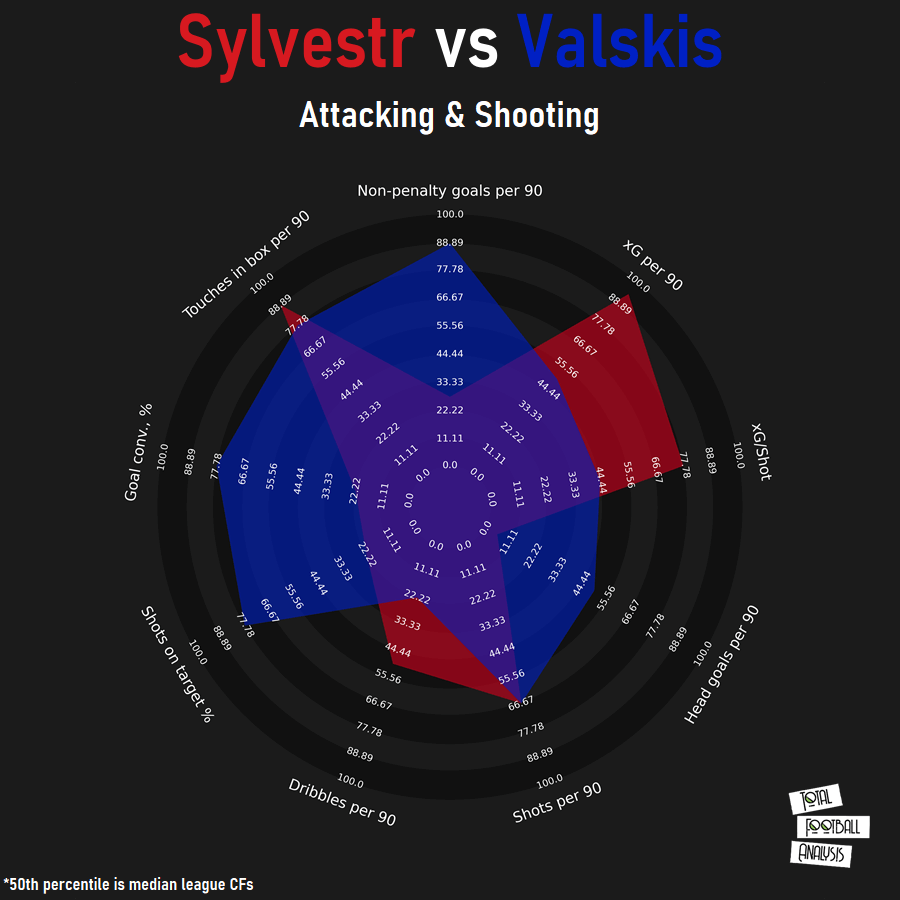 After taking a quick look at the radar, one can make the claim that Valskis has indeed performed better than Sylvestr for Chennaiyin, but we should also consider the fact that Sylvestr has been performing better than Valskis in a few metrics. xG per 90 and xG per shot along with touches in the box per 90 are a few metrics where Sylvester has outperformed Valskis. But one should keep in mind that Sylvestr has only been outstanding in the expected metrics, but falls short when we take a look at goal conversion and non-penalty goals per 90.

Just one goal from his 11 matches with such an extraordinary xG per 90 is an area of concern. But one should also think about the reasons why he’s struggling. Firstly any foreign player will take time to adapt to Indian conditions. Valskis himself took time to adapt to the conditions last year and went goalless for the first 769 minutes in the season. It’s only a matter of time for Sylvestr to get settled and get back his confidence.

There are some very good behaviours while attacking from Sylvestr which need to be recognised. Sylvester has a very good scan rate and is aware of the spaces around him. He mentally prepares for the next move and executes it quickly. 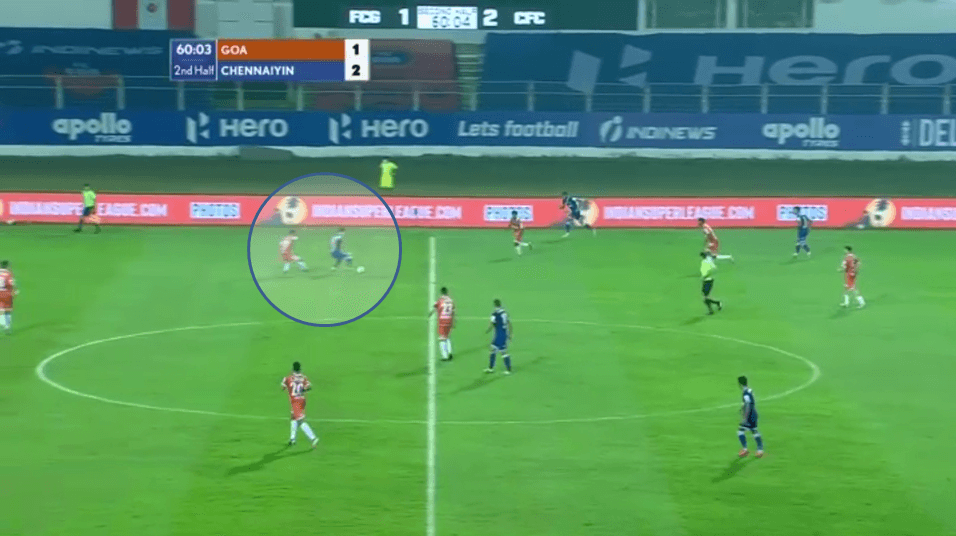 We will talk about his passing and progression in the next section, but we did see that he excels in them from his player profile. For a player to drop deep and still have quite a number of touches inside the box explains Sylvestr’s excellent work rate.

The below scatter plot is of strikers who have played more than 350 minutes and every player is marked in shades of red while Sylvestr is in green for easy and quick identification. 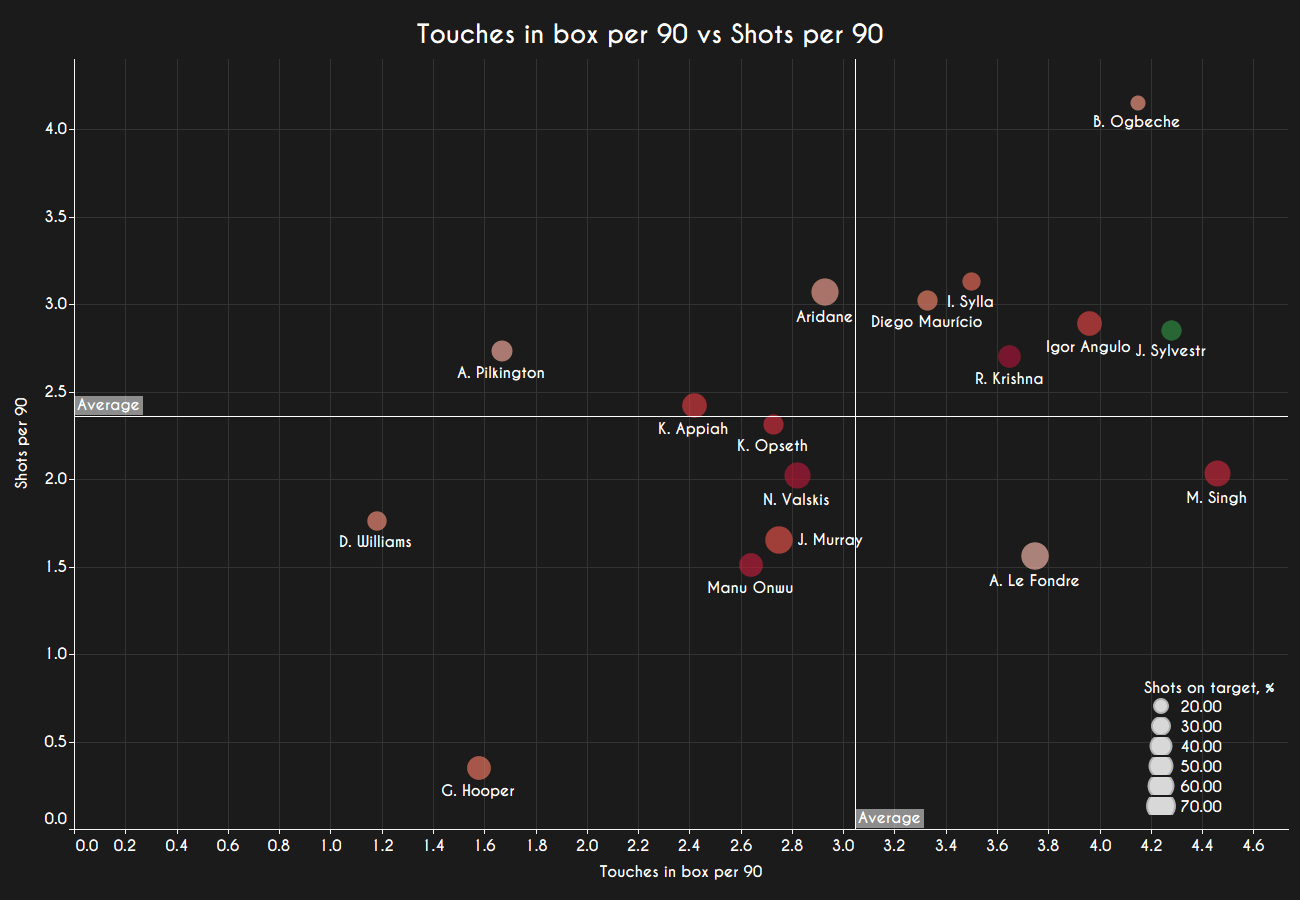 He has the second-highest number of touches inside the penalty box per 90 (4.28) while he is also above average for the number of shots (2.85) he takes per 90. His shots on target percentage is also pretty decent at 35%.

This shows that he is doing a lot of things right at the moment, and it may just be a matter of time before he begins to score regularly.

The next criteria we are looking at is both players’ passing and progression ability. As modern-day football demands every player to be equally good in every aspect of the game, we would be looking at how Sylvestr stands when compared to Valskis from the previous season. 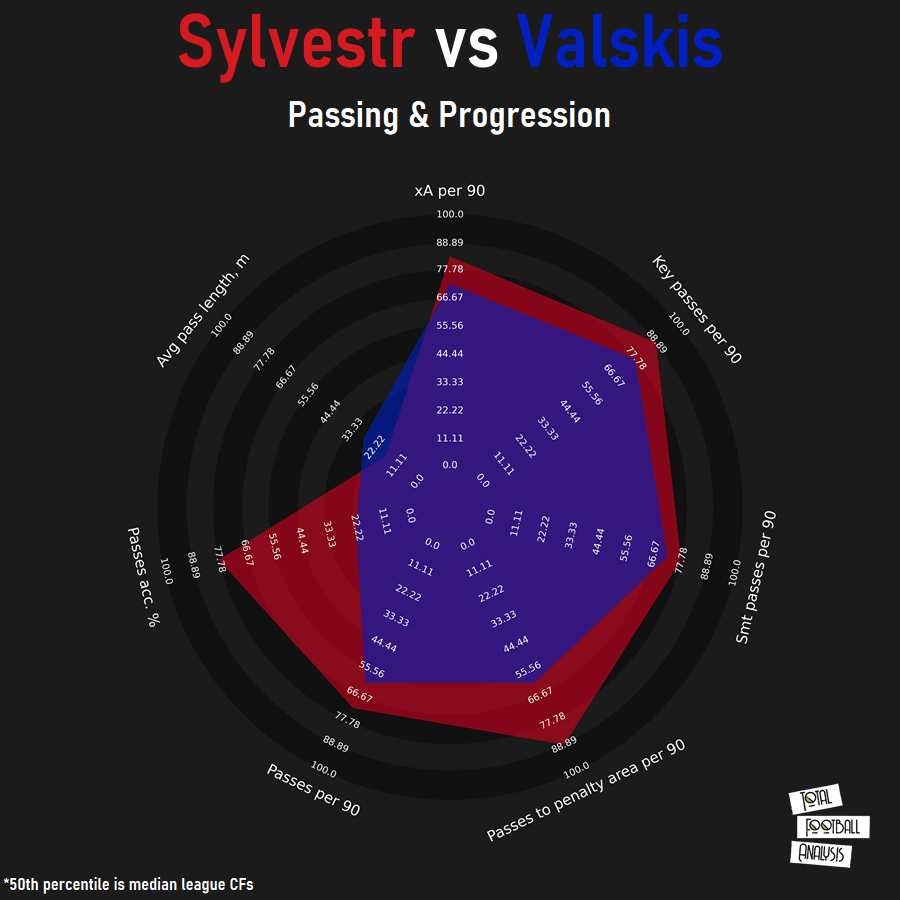 Sylvestr dominates Valskis in this particular aspect of the game. Not just by one metric, but Sylvetr looks to have performed better in every single metric except average length of a pass which isn’t a big worry. His numbers in passes into the penalty area per 90 (2.42), key passes per 90 (0.43) and smart passes per 90 (1) are some of the best figures in the league so far.

The reason behind this is because of how deep Sylvestr plays. Valskis too used to drop back to combine with the three attacking midfielders, but Sylvestr has a habit of dropping even further to create spaces and link play. His habit of dropping very deep has opened up chances for Chennaiyin. With no striker to operate high and with a numerical advantage in the middle, the opponents’ defence pushes high, which means, a properly timed through-ball is sufficient for them to create a threat as Lallianzuala Chhangte, one of the fastest in the league is capable of chasing down the ball and scoring. 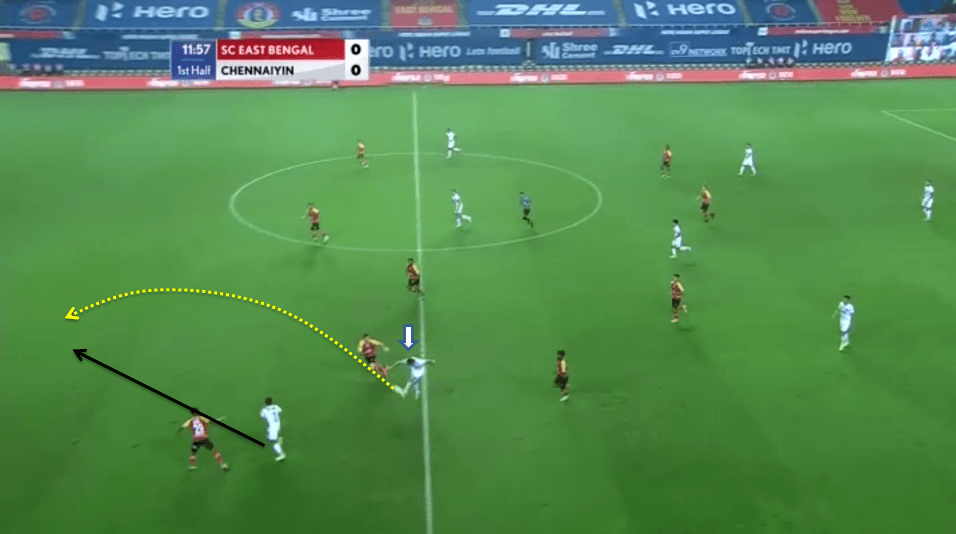 One perfect example of such a situation is Chennayin’s first goal against SC East Bengal where Sylvestr perfectly times a through ball and onto which Chhangte sprints, takes a touch and scores. He is also a physically imposing player and loves to dribble the ball which, as a result, helps him to avoid defenders and help him to create those gaps for the through balls.

Sylvestr’s ability to find space has been excellent as he manages to find room even in tight and confined areas, with many opponents around. He becomes unpredictable once inside the box and it’s hard to predict if he’s going to opt to shoot or to pass. 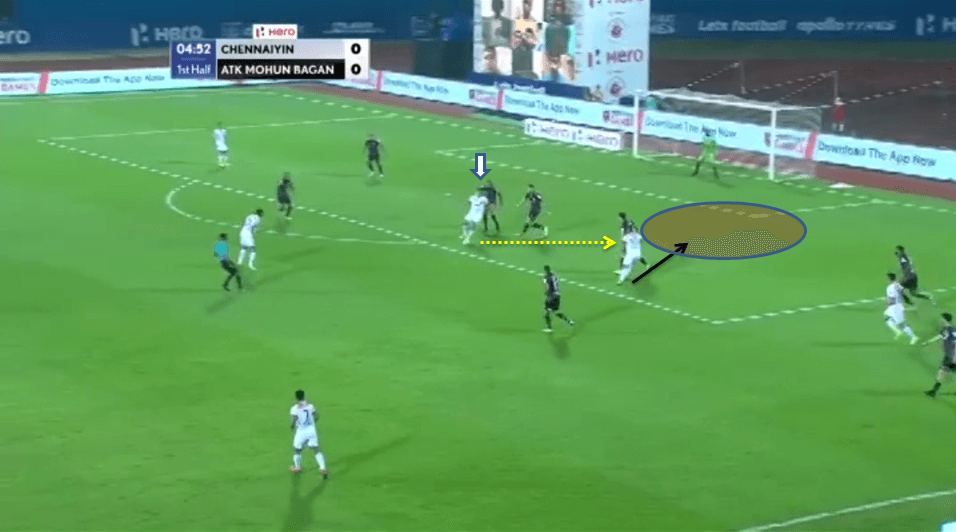 His one-touch football inside the penalty area along with his vision for spaces has helped him supply some wonderful passes to his teammates. He alone has created 15 goal chances for Chennaiyin this season out of which only one was converted. He does bring the best out from the team in the attacking third along with Rafael Crivellaro and the other Chennaiyin attackers.

As we have done by analysing the players’ attacking and passing quality, we will now be looking at their defensive numbers which would be the last section of this analysis. 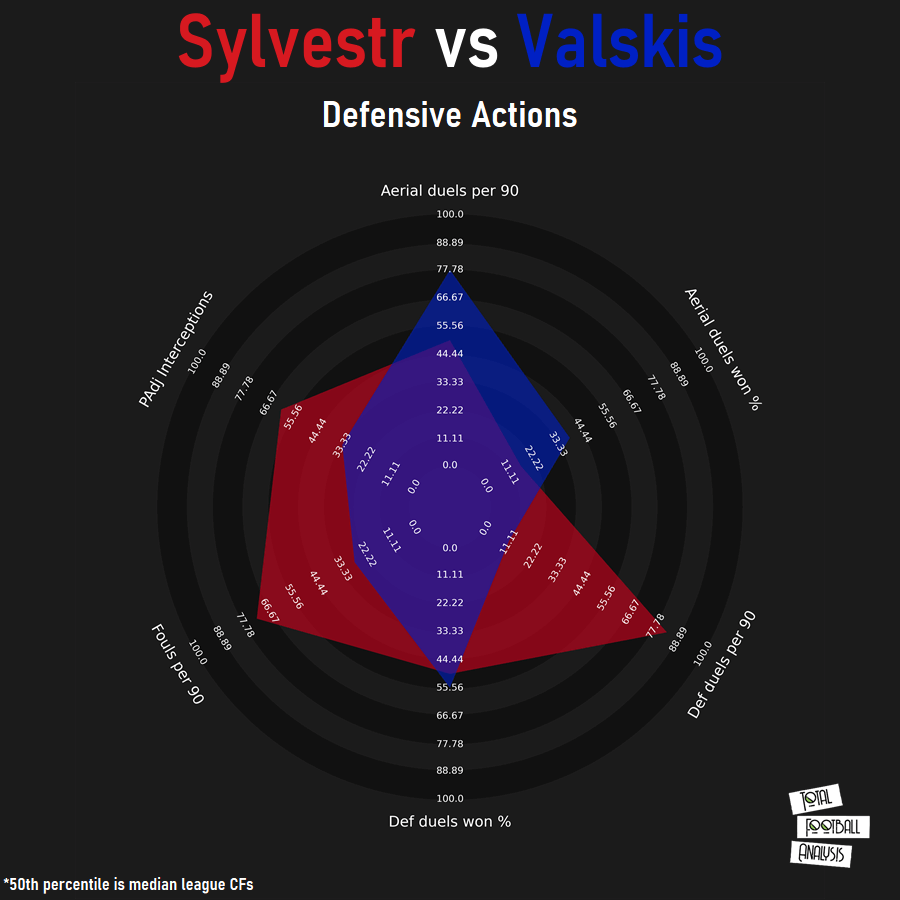 Sylvestr looks to have outperformed Valskis in the defending metrics too except in the aerial duels which we will be analysing in a while. Again the reason behind this is the fact that he drops deep. Dropping deep has helped him to see more of the ball and to defend more. Any team would appreciate their striker falling back to help out during defensive transitions. He involves himself in 4.71 defensive duels per 90 and sees success in 51.52% of them. The reason behind his better performance in interceptions is because of his ability to read the game quickly.

He is also underperforming in aerial duels, not only when compared to Valskis but also the other strikers in the league. He involves himself in an average of 4.7 duels per 90 and sees success in only 30.3% of those duels. It’s interesting to look at how he converts these aerial duels which is an area of improvement into a situation that favours him and his team. 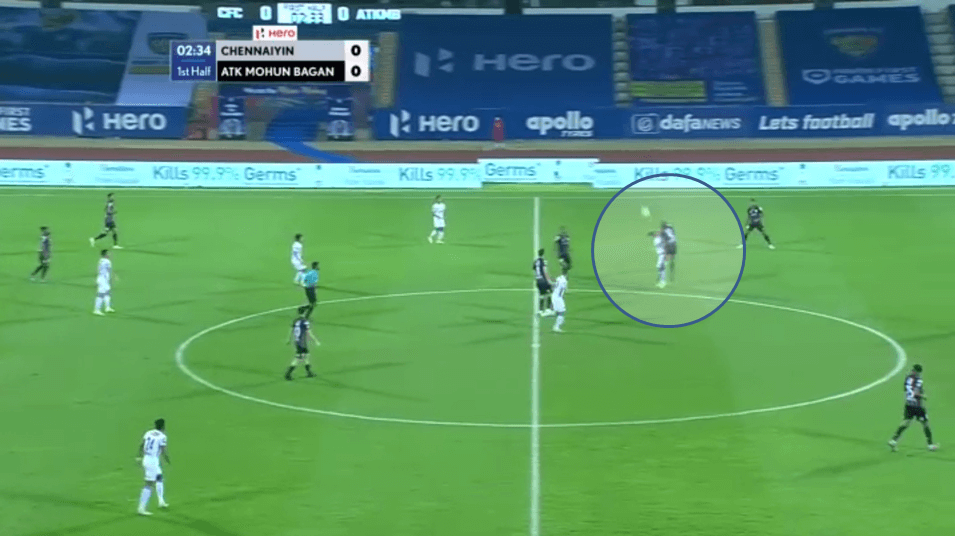 Sylvestr never competes for an aerial duel. Knowing that an aerial duel is a 50-50 opportunity he tends to draw fouls. In this match against ATK Mohun Bagan, one can see Sylvestr withdrawing from an aerial duel and is trying to draw a foul. This as a result gets the ball back to the feet of his teammates and they continue to attack.

But he doesn’t shy away from a situation which demands him to meet the ball in the air. At both attacking and defending corners, Sylvestr confidently heads the ball.

We did begin this analysis piece by asking ourselves if Sylvestr is filling Valskis’ shoes at Chennaiyin, and by now I’m pretty convinced that Sylvestr has managed to effectively replace Valskis, and in fact is performing even better than him for the team. The only thing that he is lacking is his number of goals but I believe it’ll come in time as he’s getting better and better with every match.

One thing that we should remember is that even though he fails to score, he manages to create a goal-scoring opportunity for others which too is something to be appreciated. One thing that I admire the most about Sylvestr is his work rate and how hardworking he is. He will surely start shining sooner rather than later, and until then all that he needs is every player in the team to take up responsibility and the trust and confidence from the coach, players and fans.