On Sunday, we saw the biggest game of the season play out between first-placed Manchester United and second-placed Liverpool in the Premier League; a game of historical significance. This tactical analysis will take a detailed view of both side’s tactics, and why it ended as a goalless draw.

Under Ole Gunnar Solskjær this season, United have opted for either a 4-2-3-1 or a 3-4-1-2 in big games, and the question was which formation he would select, and how significant this choice would be, come full time. For Liverpool, Jürgen Klopp had a few tactical dilemmas of his own to decide upon as well, namely his centre-back duo and midfield selection, and in this analysis, we will break down what effects these choices had. 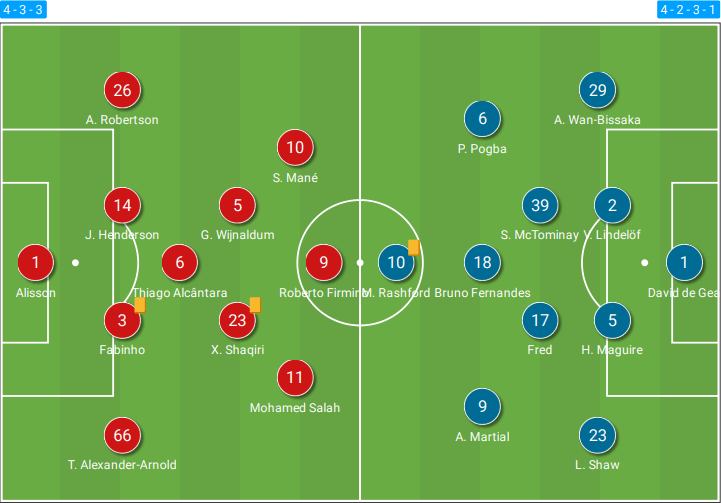 Of course, Klopp has been contending with a multitude of injuries across the course of the season, and the return of former Bayern Munich orchestrator, Thiago into the midfield was welcomed with open arms. Rhys Williams was not given the starting berth here, with Klopp opting to go with Henderson at centre-back (paired with Fabinho), which arose its issues as the game went on, as we will discuss later on in the analysis.

So, Solskjær decided to start with the 4-2-3-1, with McTominay and Fred as the double pivot, which feels well-earned in respects to recent performances. Notably, Lindelöf started over Eric Bailly here, which felt like a strange choice given Bailly’s strength in 1v1s. Solskjær also shifted his forward line somewhat, with Pogba on the right, Martial on the left, and Rashford up top to provide a more direct route to goal for United.

No room for Liverpool in the half-space

Liverpool started this game in a positive fashion, orchestrating confident attacking momentum for much of the first half-hour. It was smooth, they transitioned well from midfield into attack, breaking United’s first line of press fairly easily. There was a clear parity between United’s forward line and their midfield block, as both Fred and McTominay would drop much deeper as the Liverpool players advanced in on goal.

These two were vital in tightening the gaps between the centre-backs and the full-backs, as Liverpool knew this was their most promising way of getting through on goal. The two more advanced Liverpool midfielders would plan to drag opposition players out of space so that Salah and Mané could exploit those potential gaps. However, in this game, since McTominay and Fred dropped off to block these lanes, this did not occur. 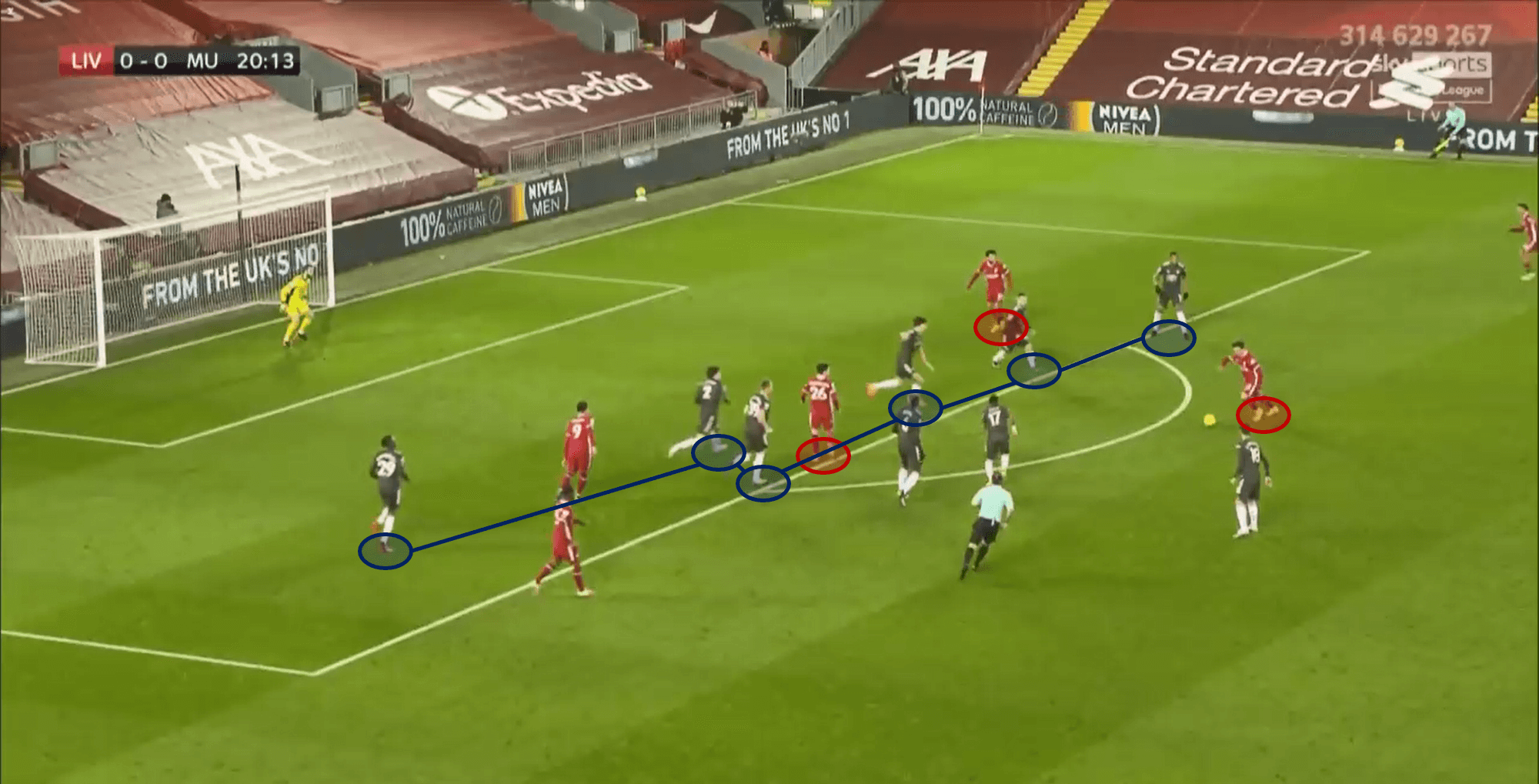 Here, we can see United’s band of six protect their goal, leaving little to no room for the likes of Robertson or Salah to move and receive the ball.

United operated less of a staggered midfield duo, rather they would begin to mark the two Liverpool #8s when they were off the ball, but once they got possession of the ball, Fred and McTominay would drop into the box and looked to plug the gaps in the channels that the two Liverpool wingers could exploit. Not only did this give less room to shoot, but it also cancelled the opportunity for Liverpool to go to the byline and produce cutbacks.

In Burnley-esque fashion, they also protected the goal by getting their bodies in the way of the shots. This was evidenced in Liverpool’s eight blocked shots by the end of the game, with Harry Maguire blocking five on his own. The sheer number of bodies in their box influenced Liverpool’s forward’s greatly; they had little to no time inside the box to take shots of any great value.

Using the same example as before, we can see the result of Shaqiri’s limited passing options – a shot which reverberates off of Maguire and out for a corner kick. 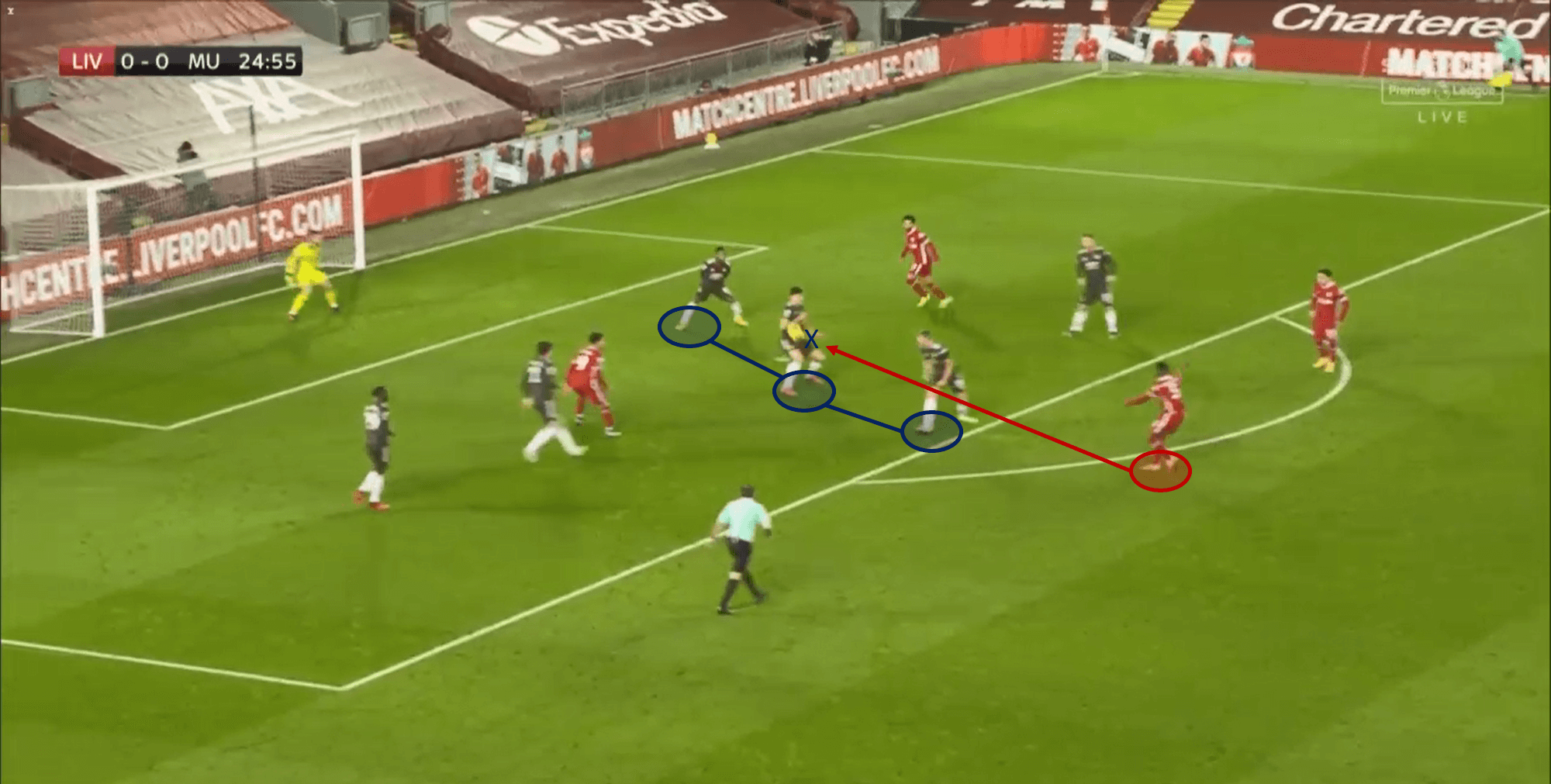 Wijnaldum picks up the ball on the edge of the box, with essentially a column of three United players ready to block the shot on goal, with Maguire eventually getting his body in the way.

These tactics also prevented many passing opportunities for Liverpool. Throughout the match, Liverpool would approach the final third, take a couple of touches on the ball, and rotate the ball sideways in and around the penalty area. There was no space to run into, and the crossing option would have been unsuccessful given Maguire’s dominance aerially. Klopp’s side were relying on individual brilliance at times to break down the United defence. 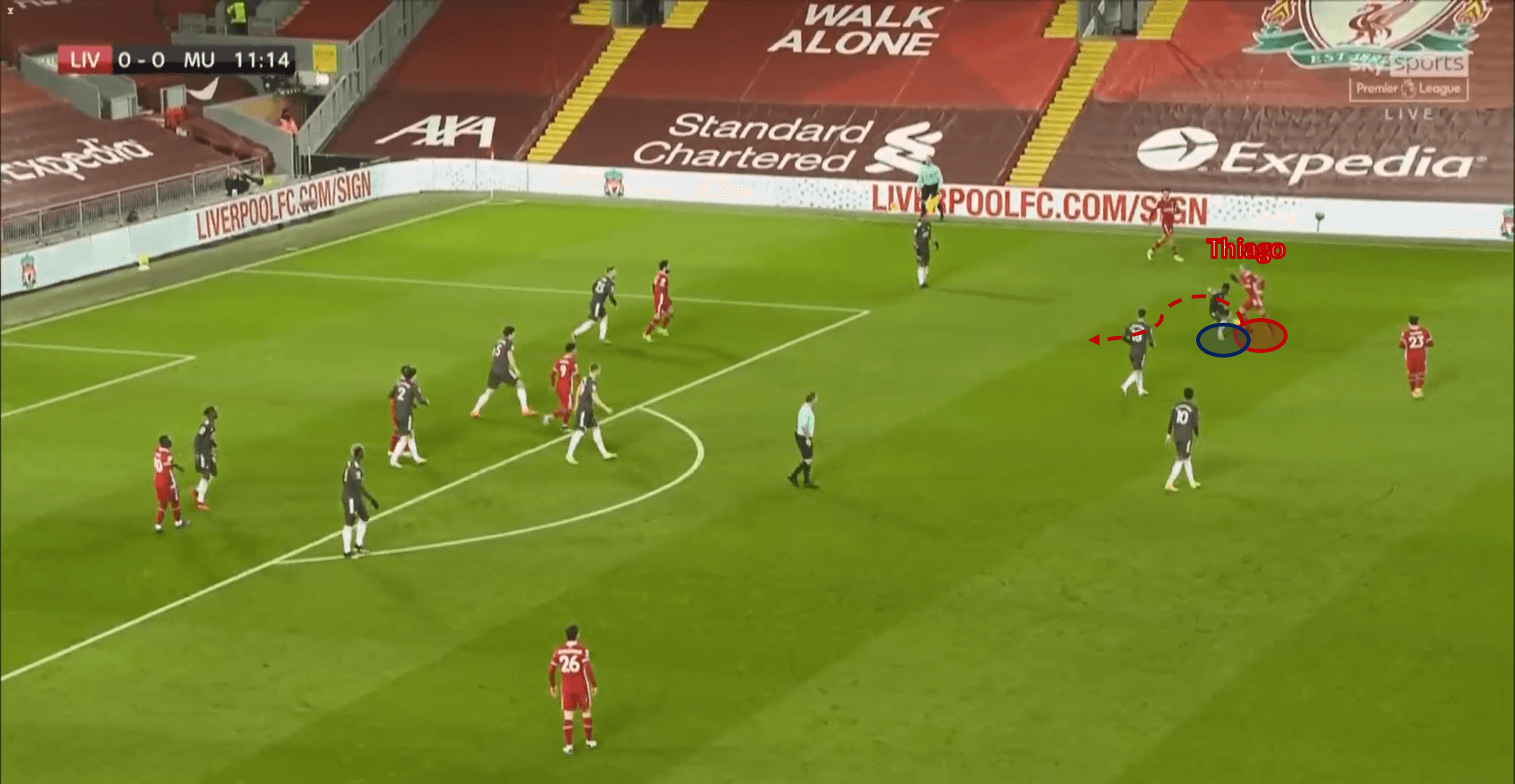 Thiago receives the ball and flip-flaps his way past Fred, a piece of individual brilliance needed to destabilise this United defence. 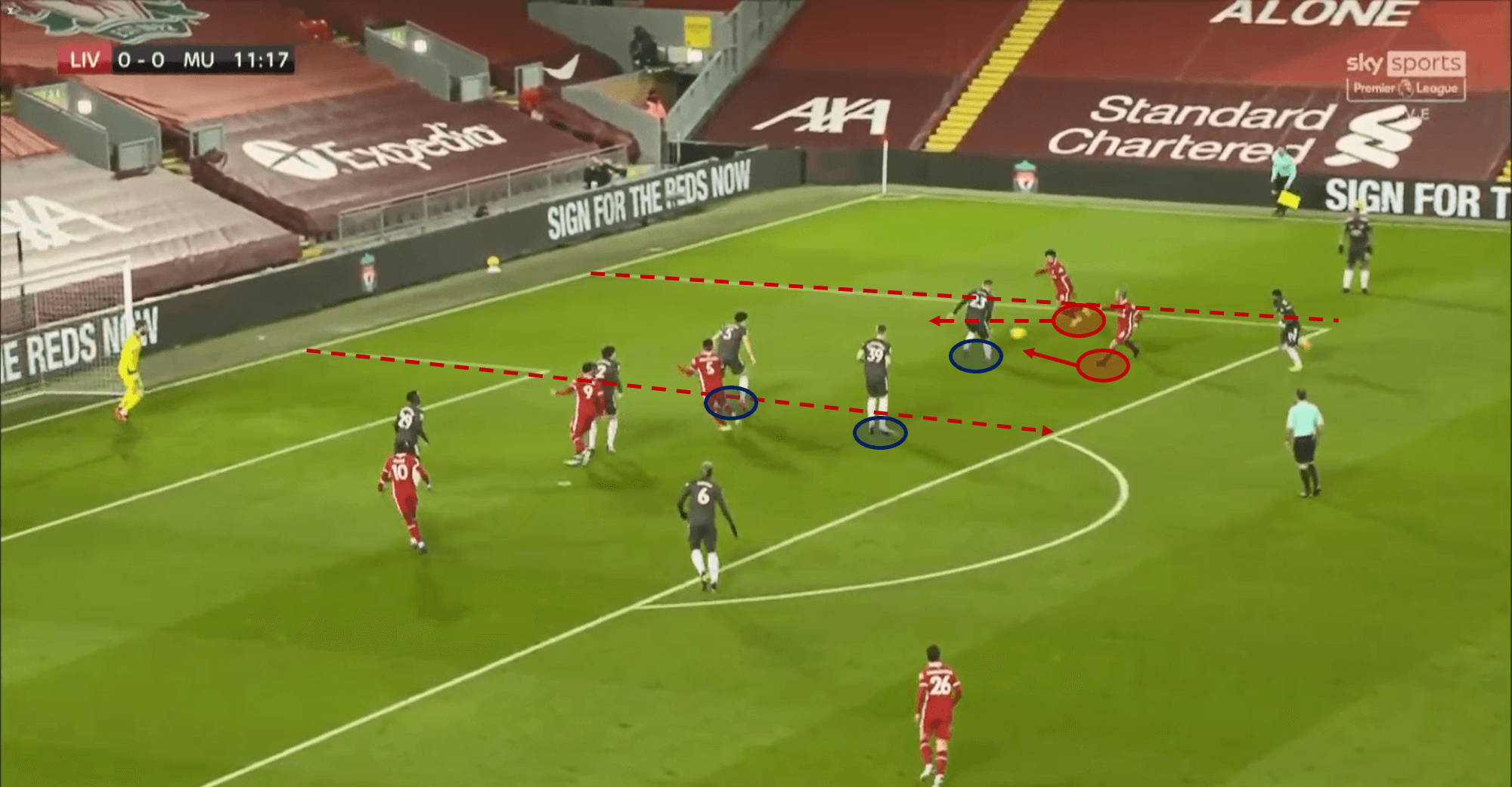 Here, Thiago has the right idea to send Salah towards the byline, but the execution isn’t there, and it goes out for a goal kick.

Shaw gained several plaudits after this performance and rightly so. He marshalled Salah out of the game, limiting the Egyptian’s time and space on and off the ball. It was a great man-marking performance from a player who seems to have solidified his place in the starting lineup now over Alex Telles. He knew when to step out of the defensive line and when to tuck in with little instruction from Maguire, the leader of that back four too.

As much as Liverpool did well early on in the build-up with neat passing rotations to beat the United press and get into the final third, and as we have touched upon, this contained issues. One of the main benefits of having two natural midfielders in your back four is their elite passing ability. Their vision meant that they spotted the runs of both Mané and Salah in behind United’s back four, who switched wings as the game developed.

This also applied to Liverpool’s two 8#s in this game, Wijnaldum and Shaqiri. When they won the ball back in the middle third, Mané and Salah would instantly make that curved run from a wide area, into a more dangerous central zone. The big advantage of having both players play on opposite wings was that when they got into the penalty area on the counter, they could more accurately find a teammate in the six-yard zone. 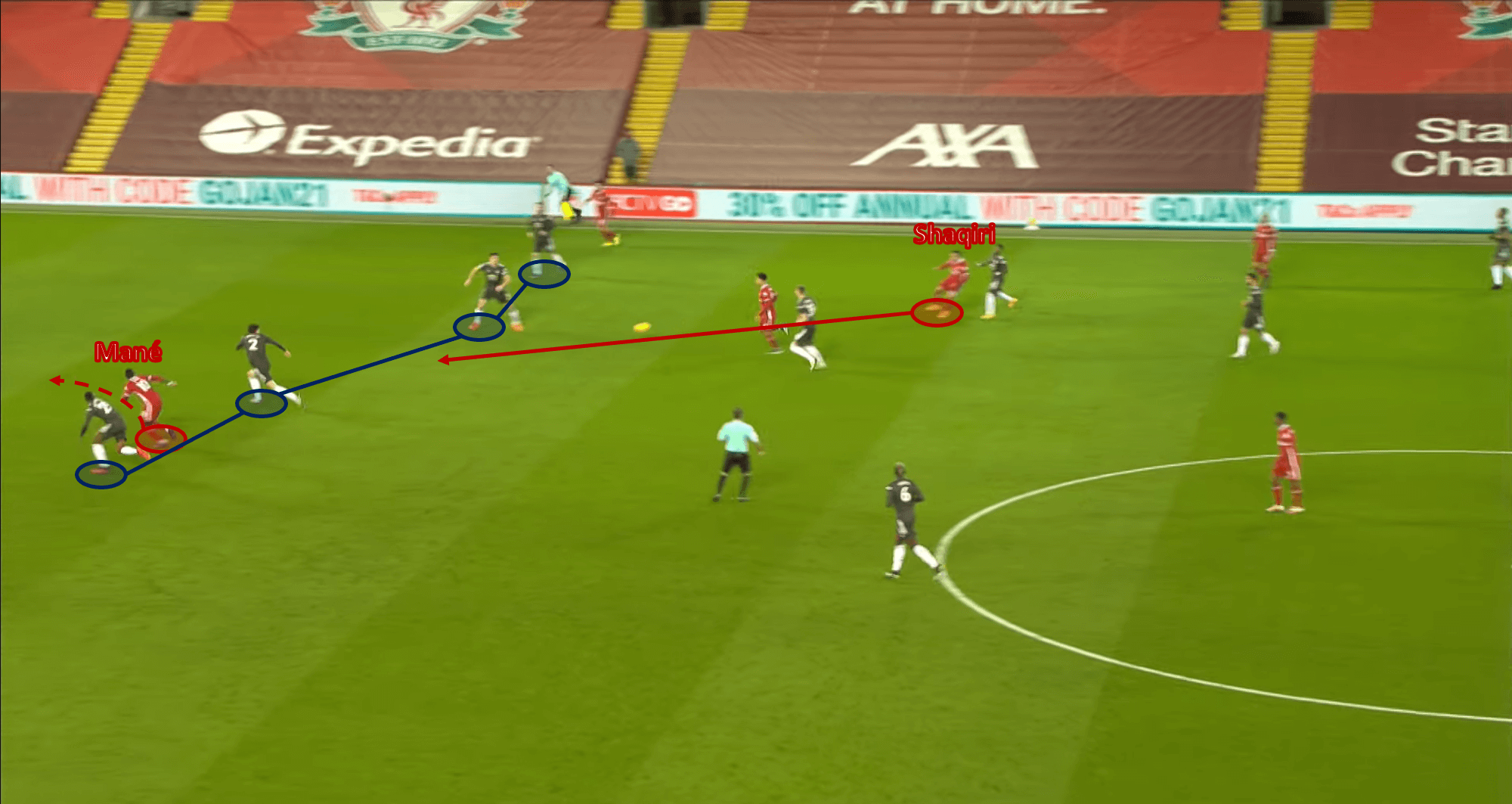 Mané makes his run from the left half-space into a central area, he receives the ball in the box, turns and finds Firmino who fluffs his chance. 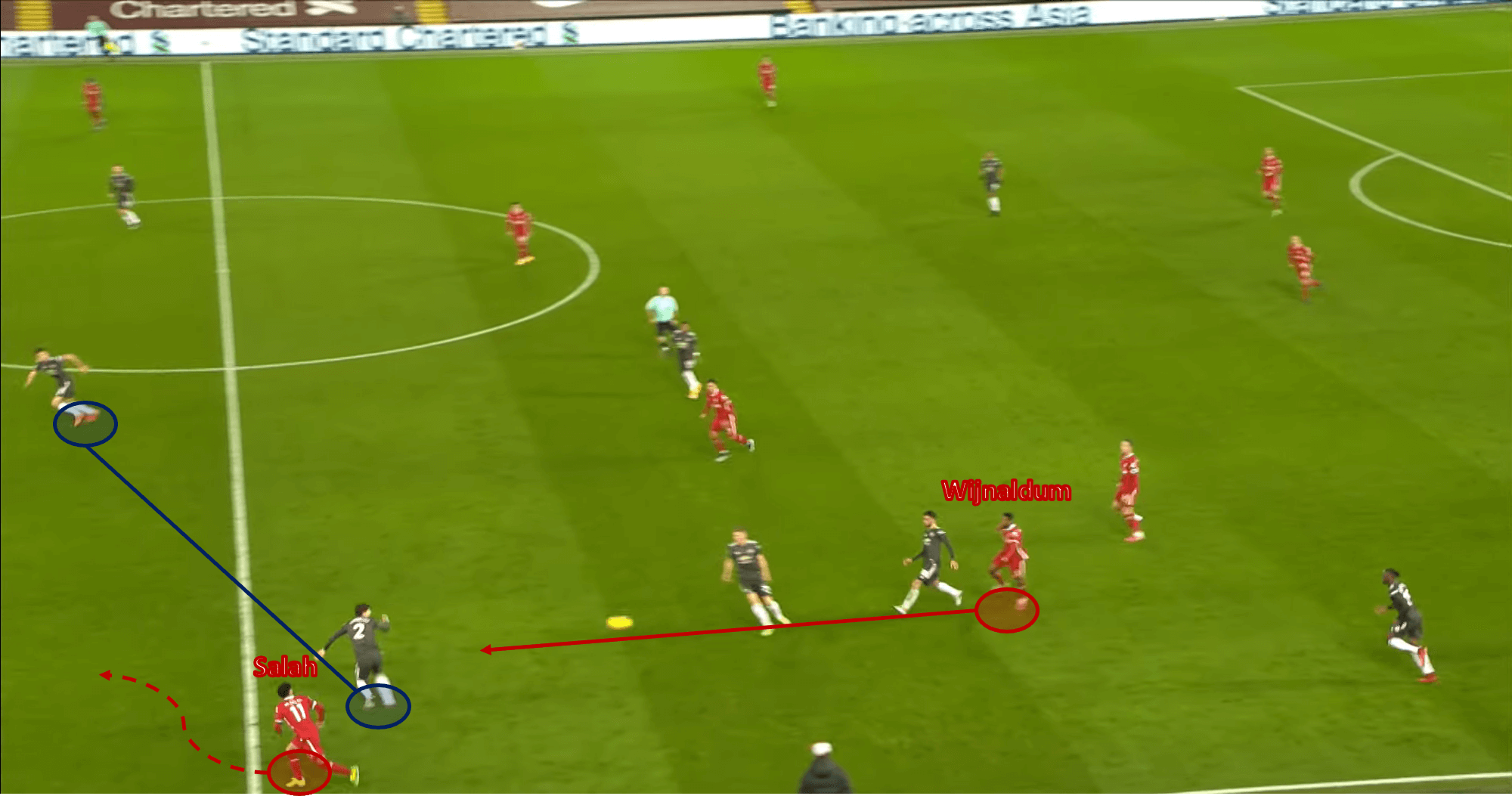 Wijnaldum wins the ball back off Fernandes and spots Salah’s run early on. He carries the ball into the box but spends too much time on the ball and loses it.

He was not making as many attacking forays as usual, but he did occupy the ball fairly regularly, and far more so than Robertson on the other side of the pitch, especially in the second half. He looked to either find the runs of either winger, or he spotted Firmino who would drop into the midfield to create overloads in central areas. This assisted Liverpool in gaining a foothold of possession in the final third. 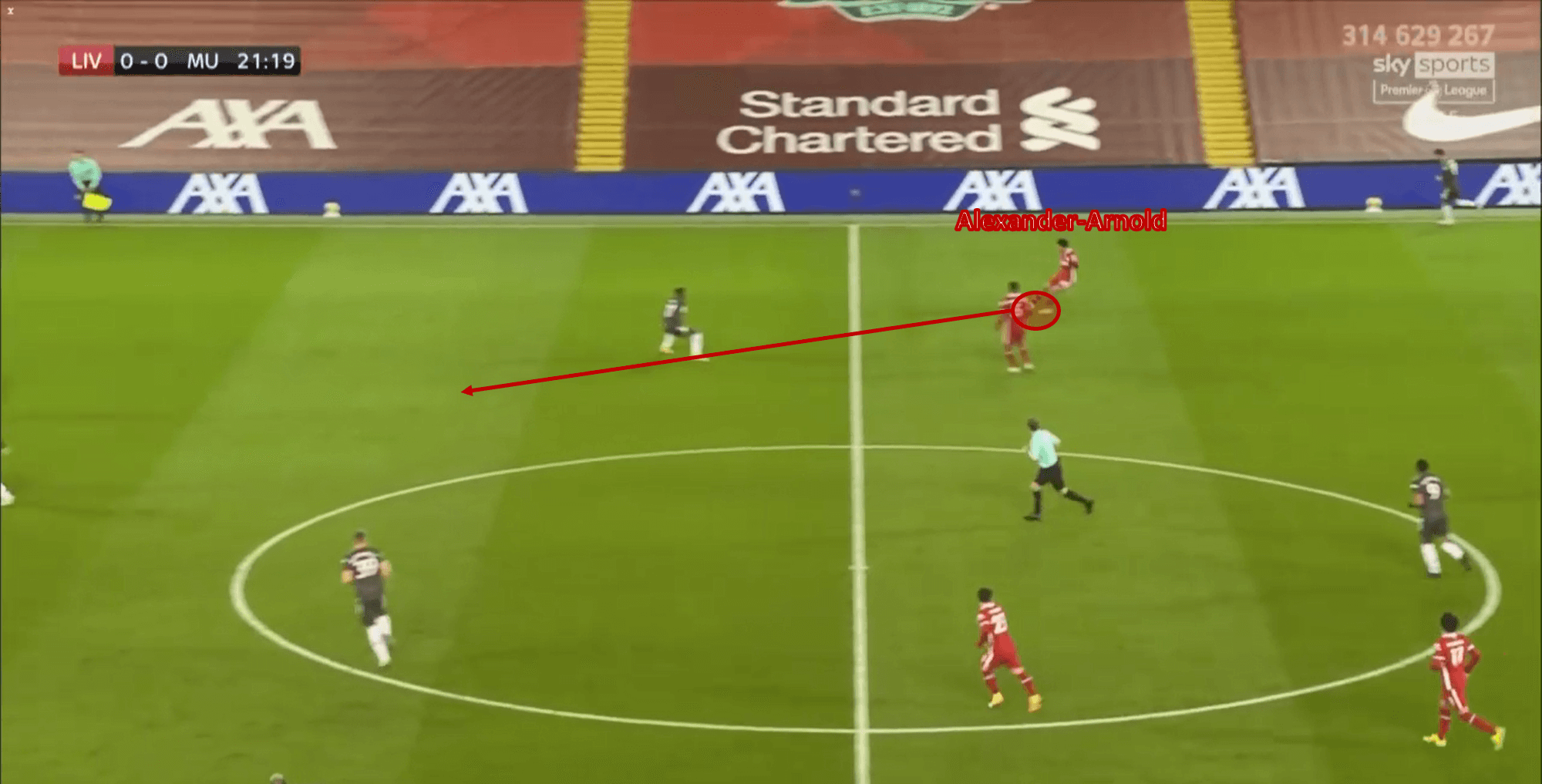 From within his team’s half, Alexander-Arnold’s excellent vision means he spots Firmino dropping into space to collect the ball and finds him with a long-range pass.

United started the game with Rashford upfront, Martial on the left, Fernandes down the centre, and Pogba on the right. The idea behind this was to supply balls for Rashford to run in behind the Liverpool defence. Considering Liverpool started with not the fastest centre-back partnership and given the high positioning of the Liverpool full-backs too, this was a smart idea if they could execute it correctly.

Unfortunately, United had eight offsides given against them in this match. This was a mixture of poorly timed runs on United’s behalf, but also smart uses of the offside trap from Liverpool’s perspective as well. In terms of scenarios, these offsides occurred both in open-play and from set-piece opportunities, usually resulting from ground passes rather than aerial ones.

High up the pitch, Wan-Bissaka plays the through pass between Robertson and Henderson towards Rashford. Rashford is a fair distance offside here.

Rashford was mainly at fault for these offsides, collecting five of United’s eight calls. This does make logical sense, given he was the primary target as the sole centre-forward, but the timing of his runs is still a noticeable weak point in the Englishman’s game. That is not to say this method of chance creation was completely nullified by this, they did make their way into Liverpool’s penalty area, but they did not do much with it when they did.

Fernandes spots Rashford’s blindsided run inside his team’s half and sends the ball down the channel successfully. 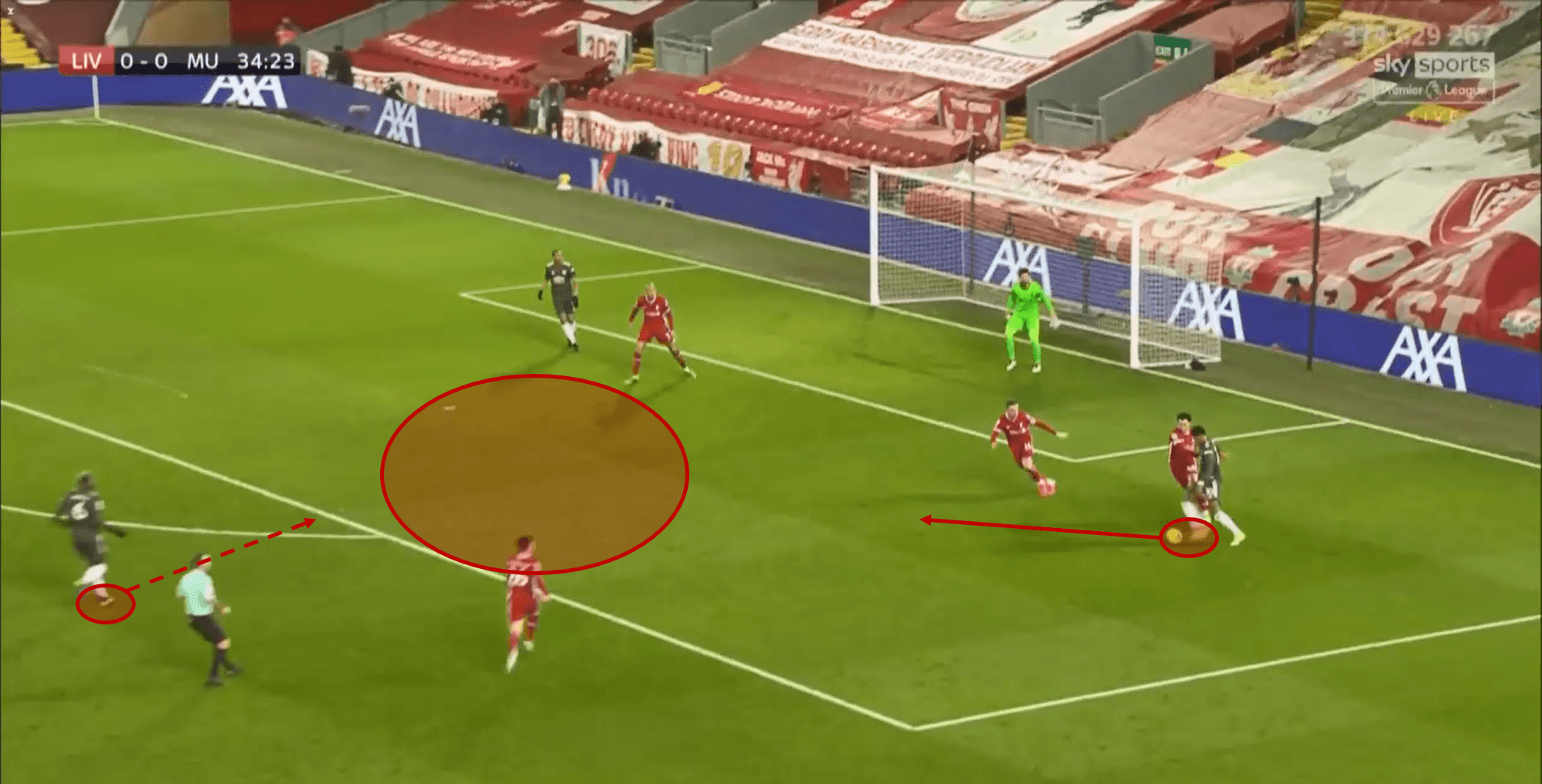 Pogba times his run smartly to arrive in the box with time and space. Regrettably, Pogba takes too much time on the ball before being crowded out by the Liverpool defence.

There was a legitimate promise in this approach. Despite the number of offsides, United only needed one pass to be played correctly against Liverpool’s high defensive line and they were likely to obtain a high-value chance on goal. However, as they infrequently got touches inside Liverpool’s penalty area, they were not confident enough to take the chances they had inside the box, notably Pogba in the second half.

Wan-Bissaka carries the ball up the pitch well, before finding Pogba in the box, who has again made a smart, blindsided run into the area.

With the ball at his feet, Pogba strikes with conviction, but straight into Alisson’s body, who palms it away for a corner kick.

Wan-Bissaka and Pogba linked up nicely here, and it was one of the few attacking positives that Ole can take from this game. They passed to each other 18 times in total, the most in the United squad, and a few of these passes were dangerous and asked multiple questions of the Liverpool defencing via probing through ball or direct passes after a ball carry from Wan-Bissaka.

It was not the perfect performance from Pogba, far from it, but he showed some of his qualities in an unfamiliar position, in one of the biggest games of the season, and such, a positive outlook should be taken. Given the late runs Pogba was consistently making, United would have perhaps been better off starting Edinson Cavani, who is easily United’s best striker facing away from the goal, and holding up the play to involve others, but Solskjær opted for Rashford’s pace from the onset, perhaps an unwise decision in hindsight. 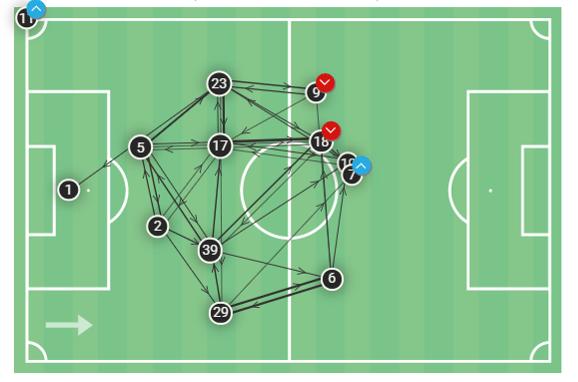 Somewhat inevitably, this was quite a boring watch for the average football fans. No goals, United sat back, and Liverpool’s front three continued to look rather disjointed. Nevertheless, from a tactical perspective, this game brought about several interesting concepts which opponent clubs can analyse and digest. From United’s deep block (protecting the half-space) to Liverpool switching wingers’ positions and utilising Shaqiri as a different type of #8 to Henderson, it left plenty for us to analyse. Long may it continue. One final thing should be noted, United should come out of this game with more of a pep in their step than Liverpool will.