La Liga has been a true rollercoaster of emotions from the very start of the 2020/21 season. And while the likes of Barcelona and Real Madrid are still trying to find their footing, Atlético Madrid have taken the initiative and are dominating the opposition across the table.

However, do the statistics back up the eye test when it comes to team performances so far? In this data analysis, we’ve crunched the data for you to identify the best performers in some of the most important metrics within the league.

Note that the analysis only includes La Liga until matchday 18 with some teams still on 17 or even 16 games played. However, we’ve mostly included per 90 statistics to even out the playing field a bit.

Before we delve into the analysis of specific phases of play, let’s first see which teams are over or underperforming so far in 2020/21. The first graph we’ll analyse depicts their offensive and defensive performances in %, which is a custom made metric that represents the variance between xG and goals and xGA and goals conceded respectively. 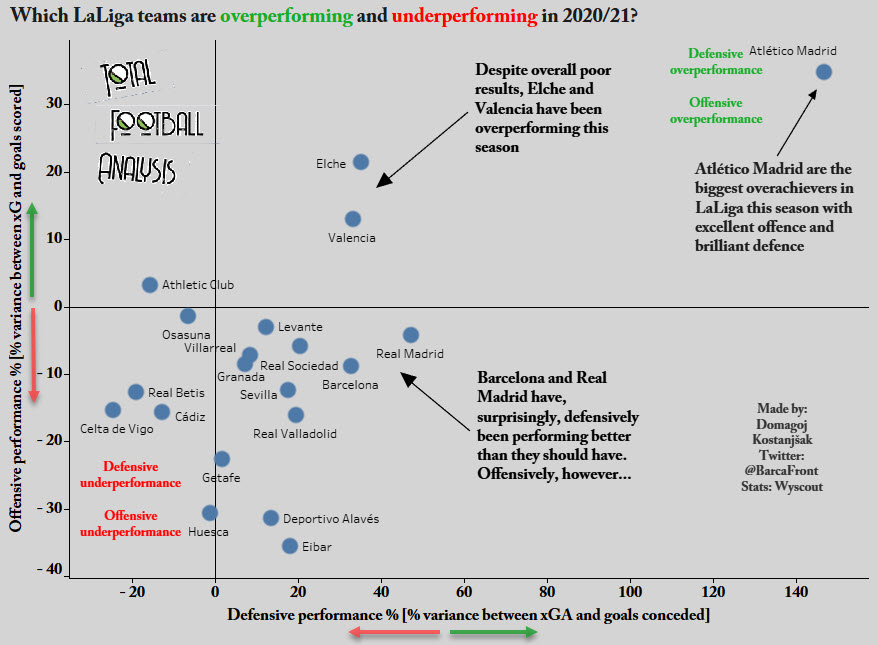 To put it simply, teams can tally positive or negative scores based on whether they overperform or underperform their xG values and the formula above gives them a % score based on that. Right from the bat, we can see a couple of very interesting things.

Atlético Madrid are certainly topping the charts here with an incredible overperformance in both categories, absolutely crushing their rivals. Diego Simeone’s team is having a great season both in terms of offensive and defensive styles of play and it’s showing in the data as well with the highest percentage in both the former (34.8%) and the latter (146.8%).

While Atléti are certainly impressive, both Elche and Valencia are peculiar as well. According to the statistics, they are the only other two teams who are overperforming in both categories. This comes as a surprise since they’re both struggling, sitting in 18th and 14th place at the moment of writing respectively.

Barcelona and Real Madrid are also in a very interesting situation as both teams seem to be overperforming their defensive metrics but are struggling in the offensive department. The Supercup winners, Athletic Club, are the only team that’s overperforming their attacking metrics and underperforming in defence despite a solid backline.

Next, we’ll take a look at their pure expected goals (xG) and expected goals against (xGA) per 90 values to determine which teams are best at creating many chances while at the same time mitigating damage. 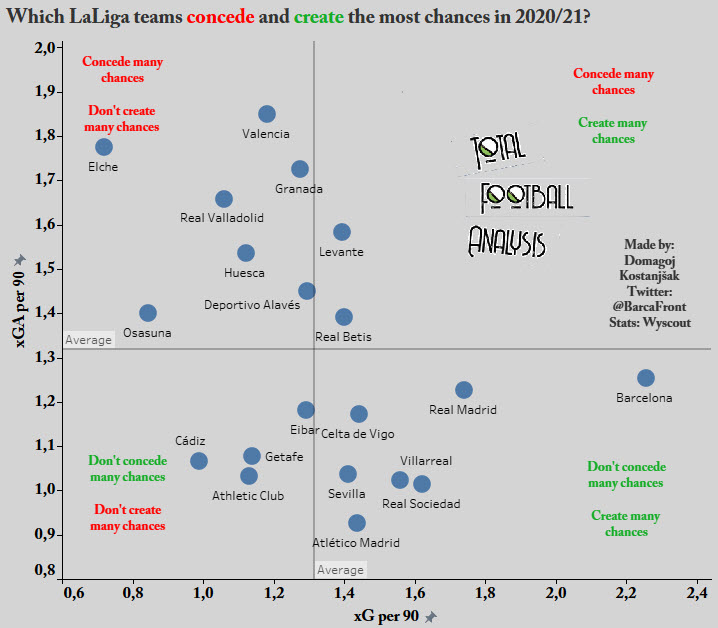 This time, the ideal position is in the lower right quadrant with high xG and low xGA per 90 statistics. And we can see that the data supports the eye test as well with La Liga’s heavy-hitters all positioned here. Once again Barcelona and Real Madrid’s ranking is interesting.

Both teams seem like the most dangerous squads going forward but are only marginally below the xGA average, meaning they are the leakiest of top teams in the league with 1.25 and 1.23 xGA per 90 respectively. Unsurprisingly, Atlético Madrid are the most defensively solid team in the league but all three of Sevilla, Villarreal and Real Sociedad are in the golden middle with impressive values in both categories.

On the other side of the coin, teams like Elche, Real Valladolid and Valencia seem like the teams who struggle to both create and defend properly in 2020/21. The former two will surely be battling to stay in the top-flight if this continues.

This part of our data analysis will pay closer attention to La Liga teams’ attacking style of play and see what the statistics have to say there. In this section, we’ll deal with the general style of play, shooting and set-piece proficiency, starting with the first one below.

It’s difficult to establish a clear identity through pure data but we’ve decided to measure whether teams are more direct or more positional by tracking their possession values and long passes per 100 passes, as you can see in the following graph. 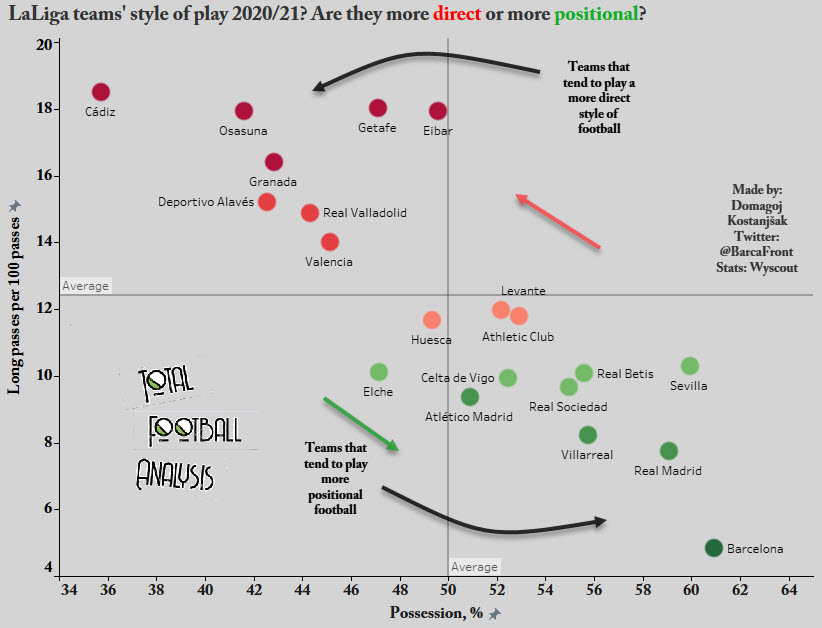 All the teams in the top left quadrant could be considered more direct as they rely on long balls and don’t keep the ball in their feet often. Additionally, you can see that the colour of the dots changes from red to green as teams become more positional moving towards the bottom right quadrant of the graph.

On one side we have the likes of Cádiz, Osasuna and Granada as highly direct teams that will attack through transitions and long passes over the top while Barcelona, Real Madrid and Villarreal are the most positional teams in La Liga. Huesca, Athletic Club and Levante are sort of in a limbo between the two – yes, they are more positional in terms of possession but still tally a fairly high ratio of long passes per 100 passes.

Next, we’ll deal with their shooting by analysing shots per 90 and average shot distance. 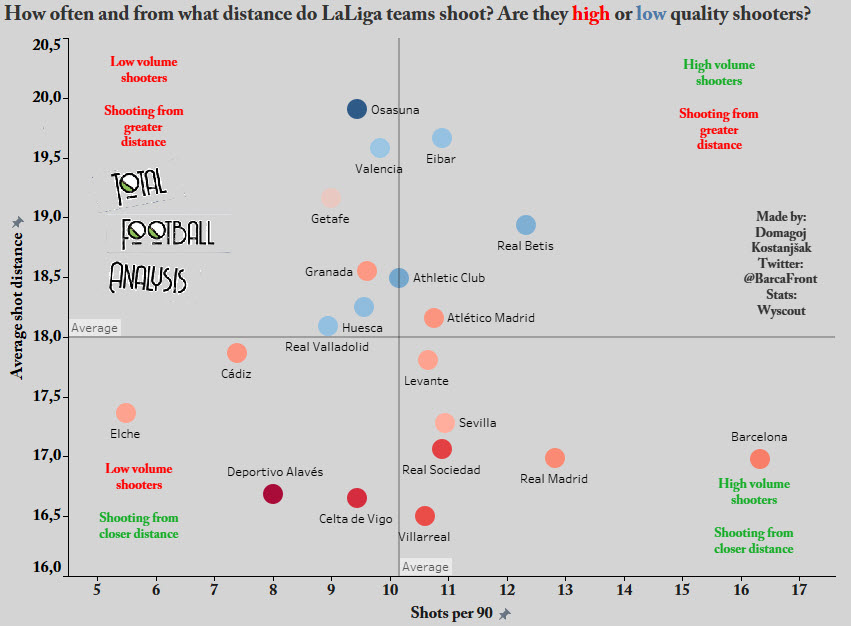 Once again, it’s the lower right quadrant where you generally want your team to be as those squads are high volume shooters who shoot from closer distance. Of course, there’s nothing wrong with recording a lower volume or shooting from distance but those will generally get you lower chances of scoring. To put that more into perspective, I’ve also calculated each team’s expected goals value per shot, which is indicated by the colour of the dots.

In the bottom right, you have the more positional teams who will get up close and personal before shooting and doing it often, following the most successful model in attacking. However, we have to mention teams in the bottom left as well.

Deportivo Alavés, Celta de Vigo and Cádiz are certainly low volume shooters but their xG per shot is still high, which is also helped by the closer distance of their shots too. Atlético Madrid are again an outlier given their positioning in the graph.

They are high volume shooters but gravitate between shooting from distance and from up close, suggesting a versatile approach. Their xG per shot is also considerably high (0.13 with 0.16 being the highest in the league) so it means these tactics are serving them quite well so far.

Finally, we’ll tackle each team’s set-piece proficiency by measuring set pieces per 90 and how many of those end up with a shot. 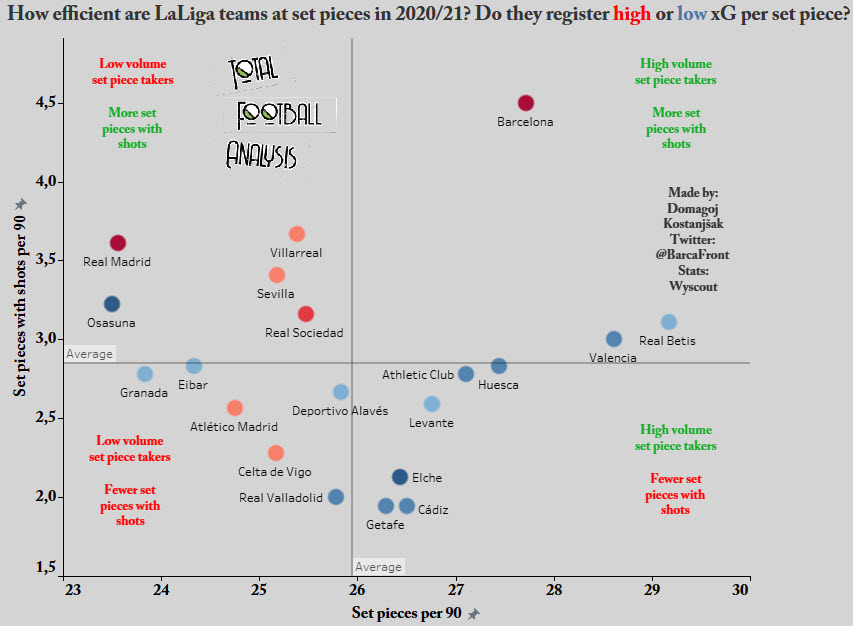 There are a couple of things to note with this particular data set. Firstly, this only measures attacking efficiency, not defensive performance, and secondly, the statistics may have been affected by direct free-kicks, which is certainly the case with Barcelona’s results.

Since the Catalans have Lionel Messi in the team, they tend to shoot from free-kicks more often than not, resulting in them being positioned in the top right quadrant here with 27.7 set pieces per 90 and 4.5 per 90 ending in a shot.

It is quite an interesting observation for the whole league, however, that there are no set-piece specialists here. Valencia and Real Betis are in the top right as well, sure, but they tally low xG per set piece are only barely above the average in set-pieces with shots.

All of Real Madrid, Villarreal, Sevilla and Real Sociedad are low volume set-piece takers with high xG but none can say that’s a standard part of their arsenal, especially since we’re talking about the more positional teams in La Liga.

The final part of our data analysis will deal with teams’ defensive style of play, analysing their efficiency in duels and pressing tendencies. The first one can be seen down below as we tackle each team’s prowess both in the air and on the ground. 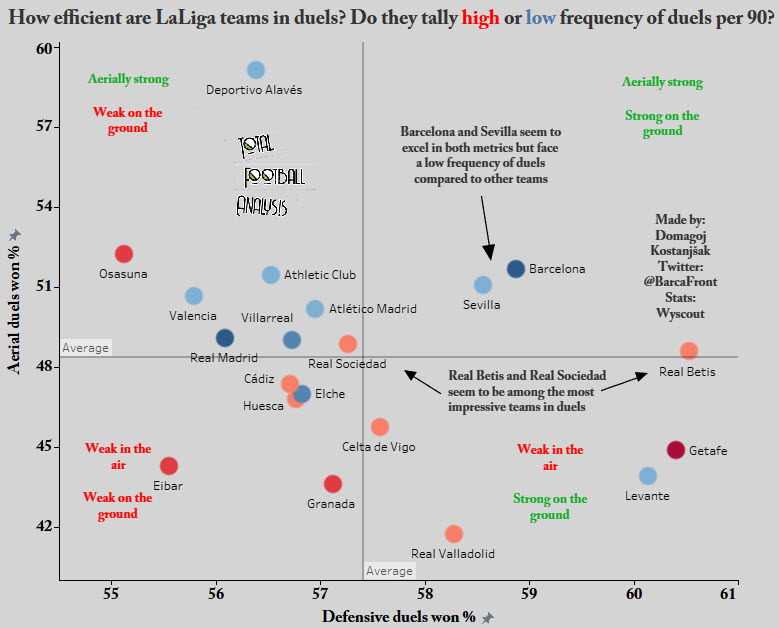 Obviously, context matters a lot in these situations so I’ve included their average number of duels per 90 minutes well, as indicated by the colour of the dots. Some teams register a really low number of duels and as a result, their data may be skewed a bit. Case in point, both Sevilla and Barcelona are highly efficient in both aerial and ground duels but also tally a very low frequency of duels in general.

With that in mind, teams in bright and dark red are better indicators of defensive proficiency, most notably Real Betis and Real Sociedad, both of whom are positioned quite well in the graph. The former especially with an above-average result in both categories.

Getafe are fairly impressive as well with 238.4 duels per game on average and 60.4% of defensive duels won. Aerially, they seem to struggle a bit but that’s also due to such a high number of duels in the first place.

Our final graph will look at every La Liga teams’ pressing tendencies and success by measuring their PPDA (passes allowed per defensive action) and recoveries in the final third (or high recoveries) per 90 minutes. 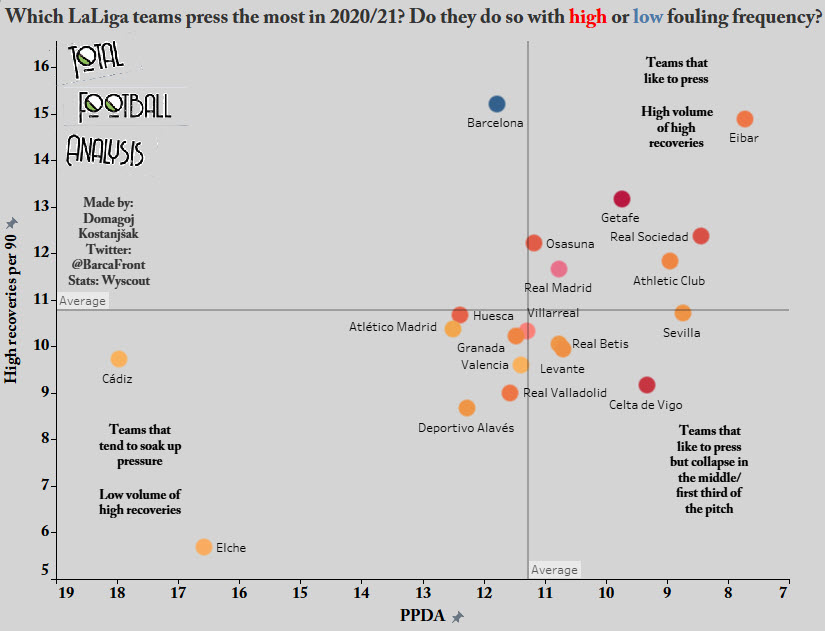 Note that it’s also important for teams to win possession high while doing it without fouling the opposition too often as it enables them to immediately continue on the offensive upon stopping the other team’s attack. Teams in blue and brighter red are more efficient at that than the others.

We can see that Eibar are the highest pressing team in La Liga by far and are then followed by Getafe and Real Sociedad. All of them, however, seem to tally many fouls in the process as well. For that reason, Barcelona, Villarreal and Real Madrid are more impressive since they are generally high pressers with fewer fouls per attempt.

Barcelona are an interesting case since they are not as aggressive as most high-pressing teams but still register a very high number of high recoveries per game. On the other side, in the bottom right quadrant, we have teams who are aggressive but mostly in the middle or the first third of the pitch where they will collapse on the opposition, as indicated by a low number of high recoveries per game.

This data analysis has tackled some of the most important statistics in the 2020/21 La Liga season so far and hopefully has helped you identify the league’s most impressive performers. Needless to say, as clear overperformers, Simeone’s Atlético Madrid seem poised to win their first crown since 2013/14 and do it with style.

On the other hand, other heavy-hitters like Barcelona and Real Madrid need to improve across the board if they are to pose a threat to the Rojiblancos. And then there are the dark horses like Villarreal, Real Sociedad and Sevilla, all of whom have well-structured teams in place that could challenge the top dogs.