The historic 100-year-old club, East Bengal will mark its debut in the Indian Super League this year. Coming into the new competition, they have revamped their squad and staff altogether. The Red and Gold Brigade has roped in the former Liverpool player Robbie Fowler as their new head coach and under him, they have made six new foreign signings.

East Bengal have signed Matti Steinmann from Wellington Phoenix who Robbie Fowler would have well-watched during his time at Brisbane Roar in A-League last year. This is a tactical analysis in the form of a scout report of Matti Steinmann. The following analysis will examine his playing style and performance from last season to eventually know how he would fit in at the new club. 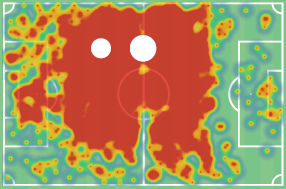 Matti Steinmann ascended through the Hamburger SV academy to play in the Bundesliga. He has represented Germany at multiple youth levels all the up to U20s. After short stints in Danish League and A-League, he has now joined Fowler’s team in the Indian Super League. The 25-year-old midfielder is 189cm (6ft 2in) tall with a powerful physique.

At Wellington Phoenix, Ufuk Talay employed a 4-4-2 formation where Steinmann was deployed as one of the double pivots (mostly LCM). He was a regular in the starting 11 as he played 24 matches accounting to 2185 minutes. The heatmap is the ideal representation to show how well he covers most of the ground. 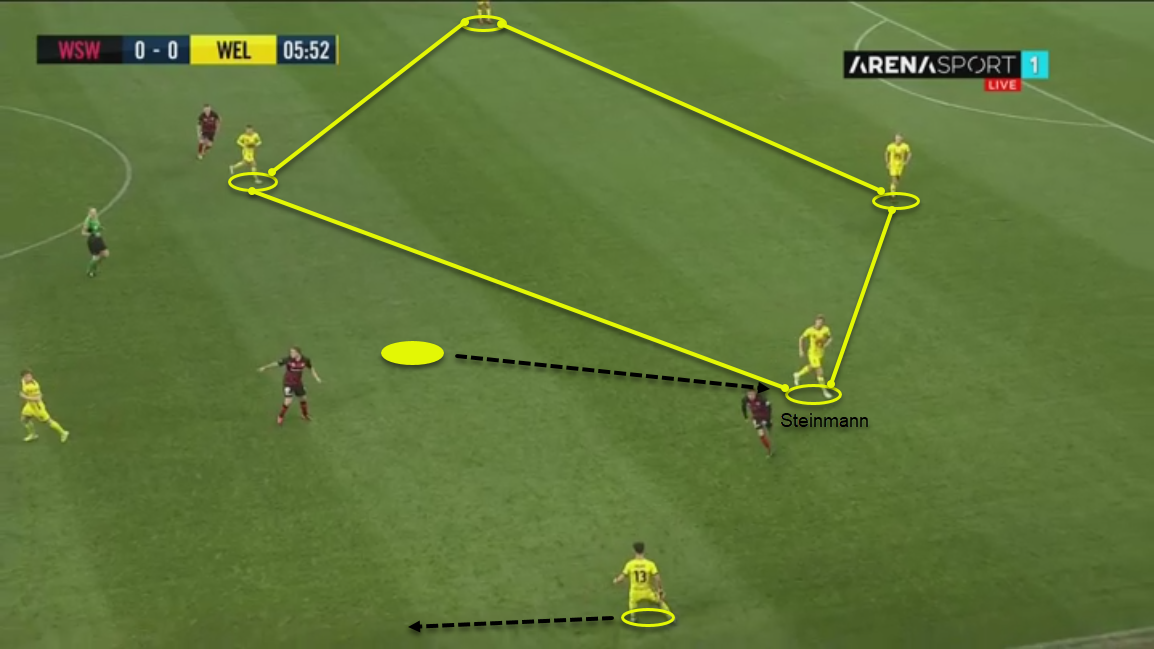 He was trusted to help the team in all phases of the play, serving different duties in each of them. When the team is in possession, he would drop between the left centre-back and left-back to form the diamond. He would sometimes sit on top of the diamond depending on the position of his midfield partner and the ball. On top of that, he contributed in the first and second phase of build-up primarily and then was restricted to move further up. When the team is out of possession, he would guard the 18-yard box by manoeuvring ahead of his back-line. 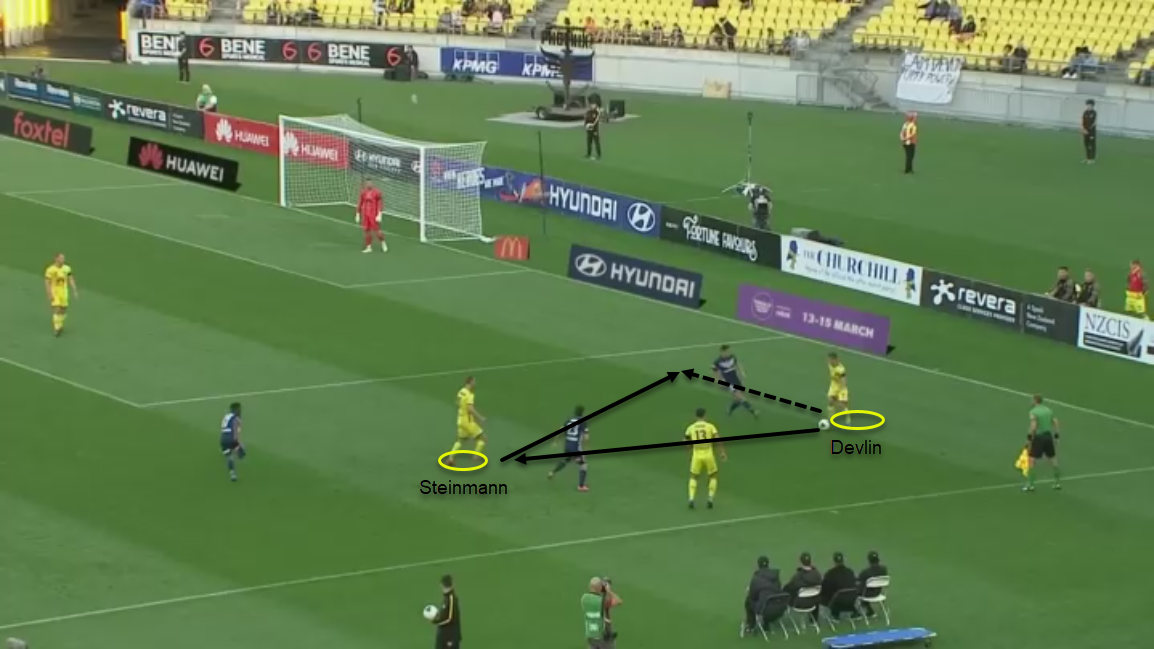 A midfielder must initially provide relevant ball support to be highly involved in passing. Since Wellington Phoenix wanted to play it out from the back and through the centre, Steinmann’s role was crucial in their side. He played 56.07 passes per 90 with an outstanding 88.52% accuracy. He constantly helps the player on the ball by finding the perfect angle for being a passing outlet.

A part of his job is not just to provide support but also attract opposition. Players from the back take his help to play a wall/bounce pass or quick one-twos to lure the opponents and create space behind them. This eventually ends up with forwards having to deal with lesser players and efficient ball progression. 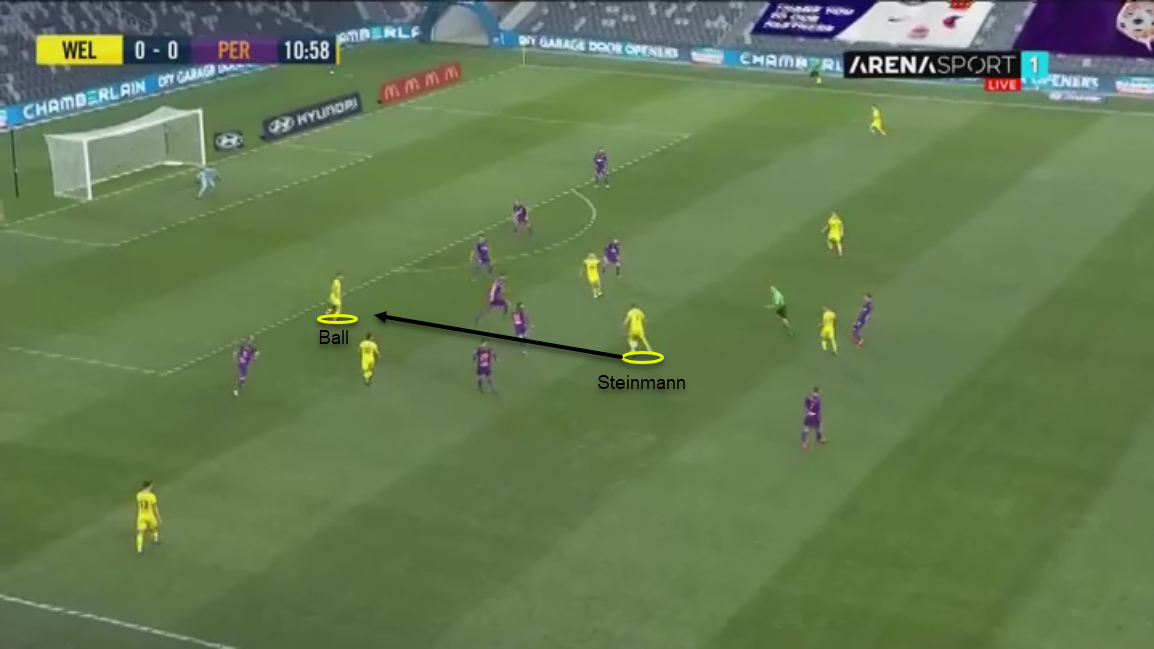 While facing upfield, the German midfielder controls the tempo of the game. He has a clear understanding of timing the pass and picking the right player to play to in that situation. Due to his constant scanning and increased awareness, he plays quick line-breaking passes to nullify the pressure. 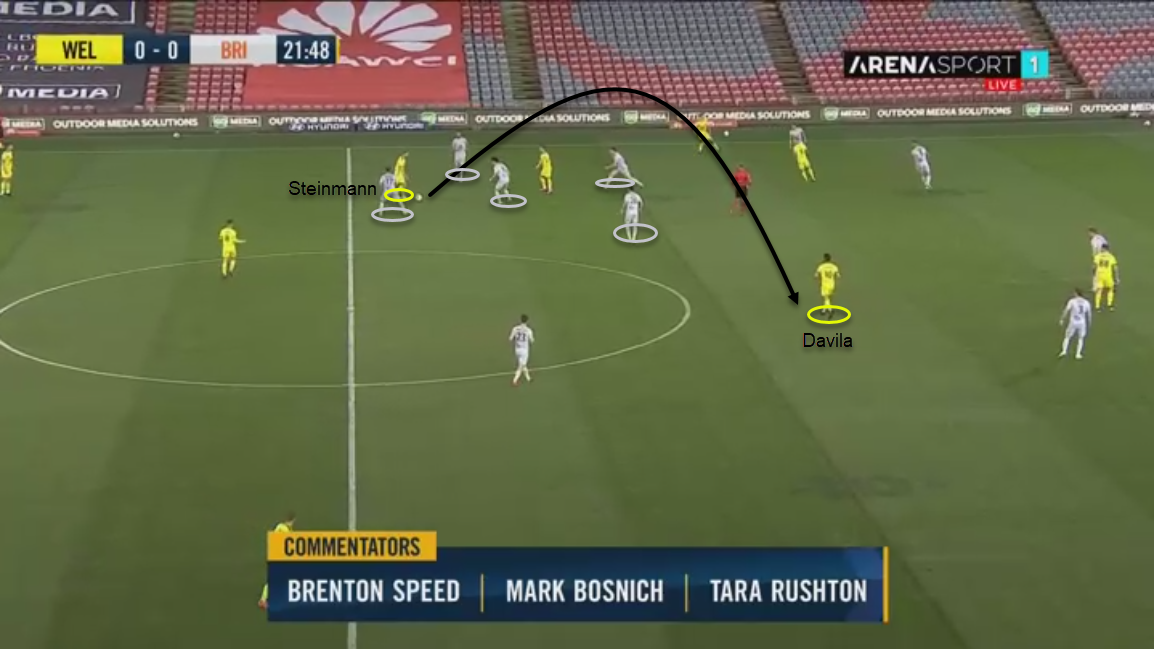 Besides he is not one of those who crack under pressure anyway. He finds a way through to play in tight spaces and always come up with a solution. His ability puts people in awe but the true credit goes to his awareness. His decisive behaviour is portrayed through his calm yet confident actions on the ball under immense pressure. Technically he is equipped to play all variations of passes which ensures his excellence while supplying.

Steinmann has an incredible range of passing around the field. He shoulders the responsibility of progressing the ball for his team. Steinmann played 196 progressive passes, out of which 170 were accurate (86.7%) last season. He played 17 passes beyond 40m of distance with 100% record. His prolific supply of deliveries from defensive and middle third contribute to exploit the space behind the opposition backline. Having a midfielder with such passing capabilities means the team doesn’t have to always go back to the defenders to switch and circulate possession. 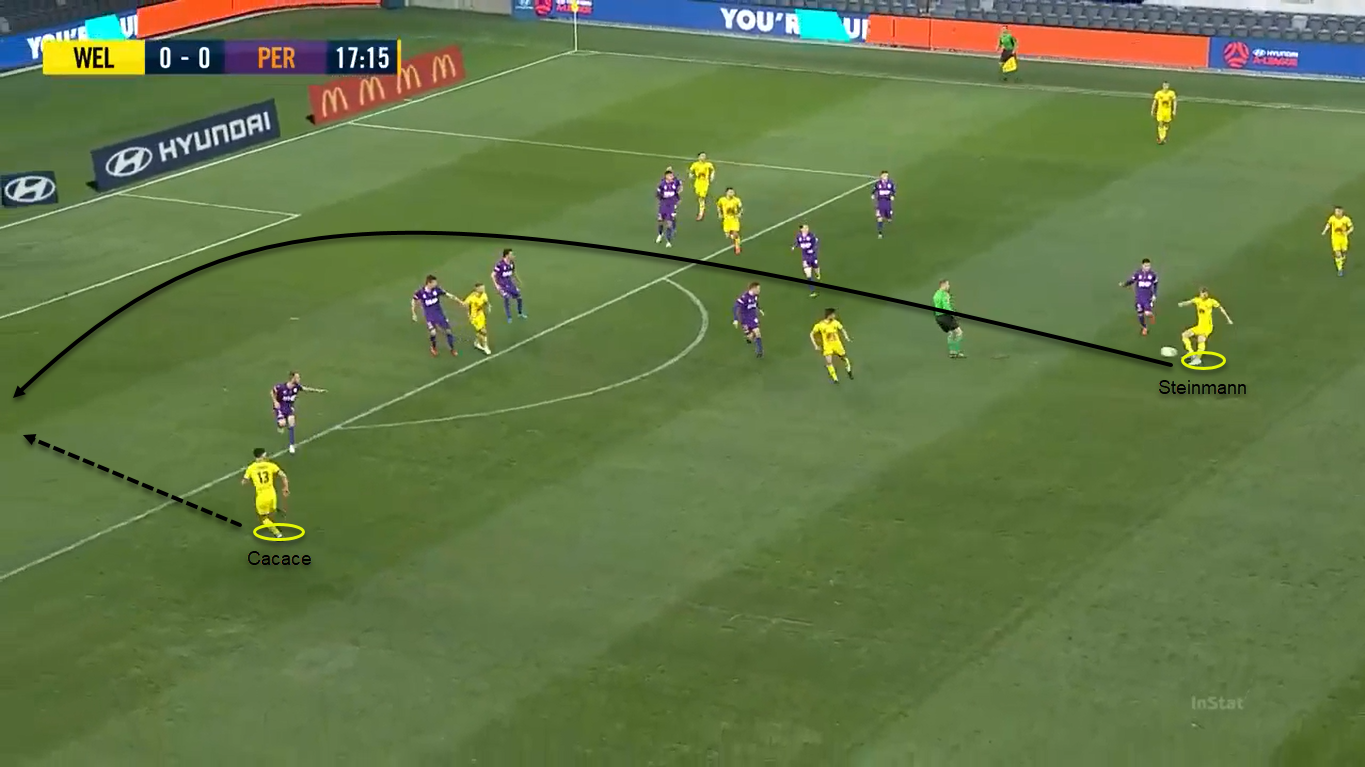 Steinmann helps in switching play rapidly from midfield, which means that the opposition doesn’t get as much time to shift the manpower on the far side. It helps in creating one v one situations for the wingers on the far side. With the signing of Anthony Pilkington and Jacques Maghoma to bolster the wings, East Bengal should surely devise strategies involving early balls from Steinmann to them. Be it picking passes, rapid switch of play or dinked passes from half-spaces, the German has all the tools in his bag. It is also worth noticing that he is playing the ball over the defence with his left foot (something that’s not rare in his case). Steinmann is comfortable with both his feet which makes his passing even more incisive. 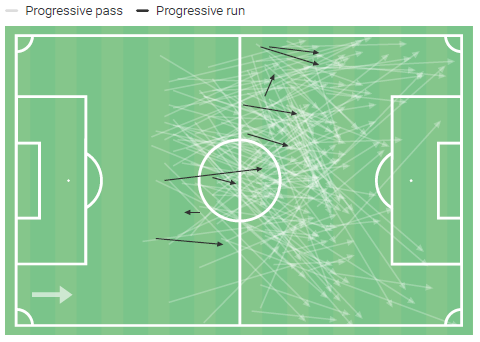 Despite all the technical abilities and flawless passing, why did Steinmann only produce an xA of 0.3 and register zero assists? One reason could obviously be the underperforming finishing from the forwards, yet the xA is too little to justify that reason. Looking at his numbers, he attempted 10.04 passes to final third with 88.46% accuracy. But his passes to penalty area were just 0.86 per 90. Which means he played only one pass to the penalty area per 90 for every 11.67 passes in final third per 90.

His progressive passing map brings more clarity to the picture. Steinmann’s distribution is mostly diagonal and angled away from the penalty area, which could be a tactical decision. He should be encouraged to play more passes over the backline given his exceptional passing potence. Surely then he will have a lot more creative contribution in the team than just providing second/third assists. 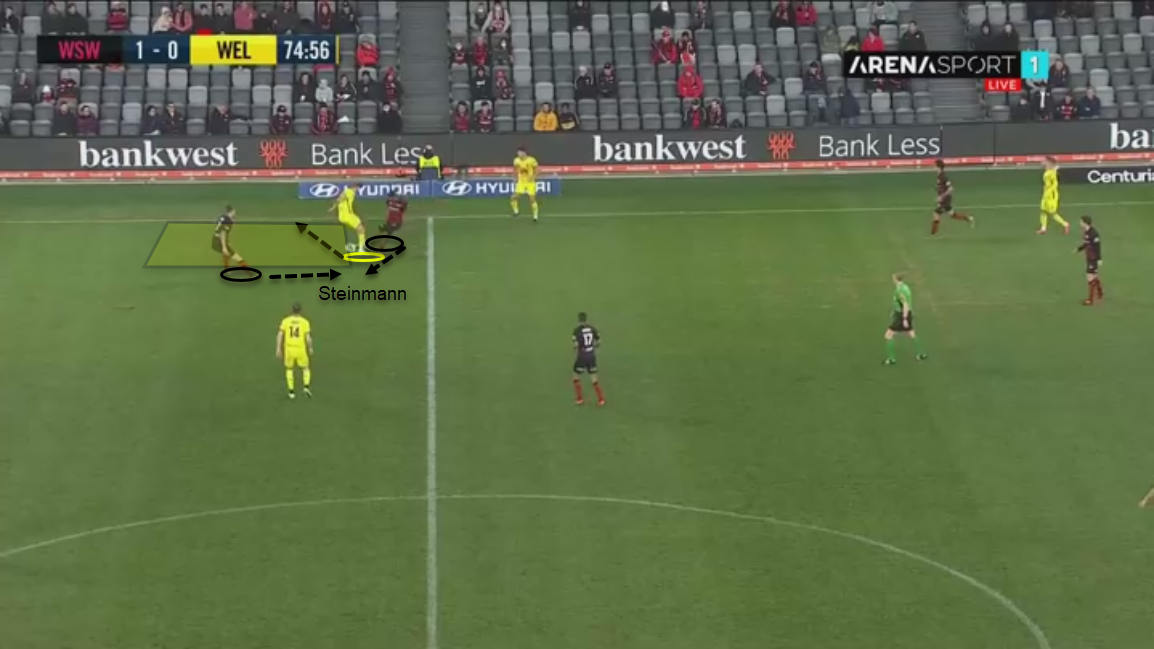 The ball progression chart above shows clearly how rarely he carries the ball to advance the play. He attempted 0.94 progressive runs per 90 and was more inclined to create through passing as he also didn’t want to compromise his position unnecessarily. Therefore, the midfielder majorly dribbles to evade pressure and create a passing angle in tight areas.

He extensively uses body feints and croquetas to shimmy through the opposition. Due to his constant scanning, Steinmann is cautious of the danger. He likes to use the ‘L-Cut’ extensively while receiving the ball to beat the opposition with his first touch. Steinmann attempted 1.54 dribbles per 90 with a 58.33% success rate. 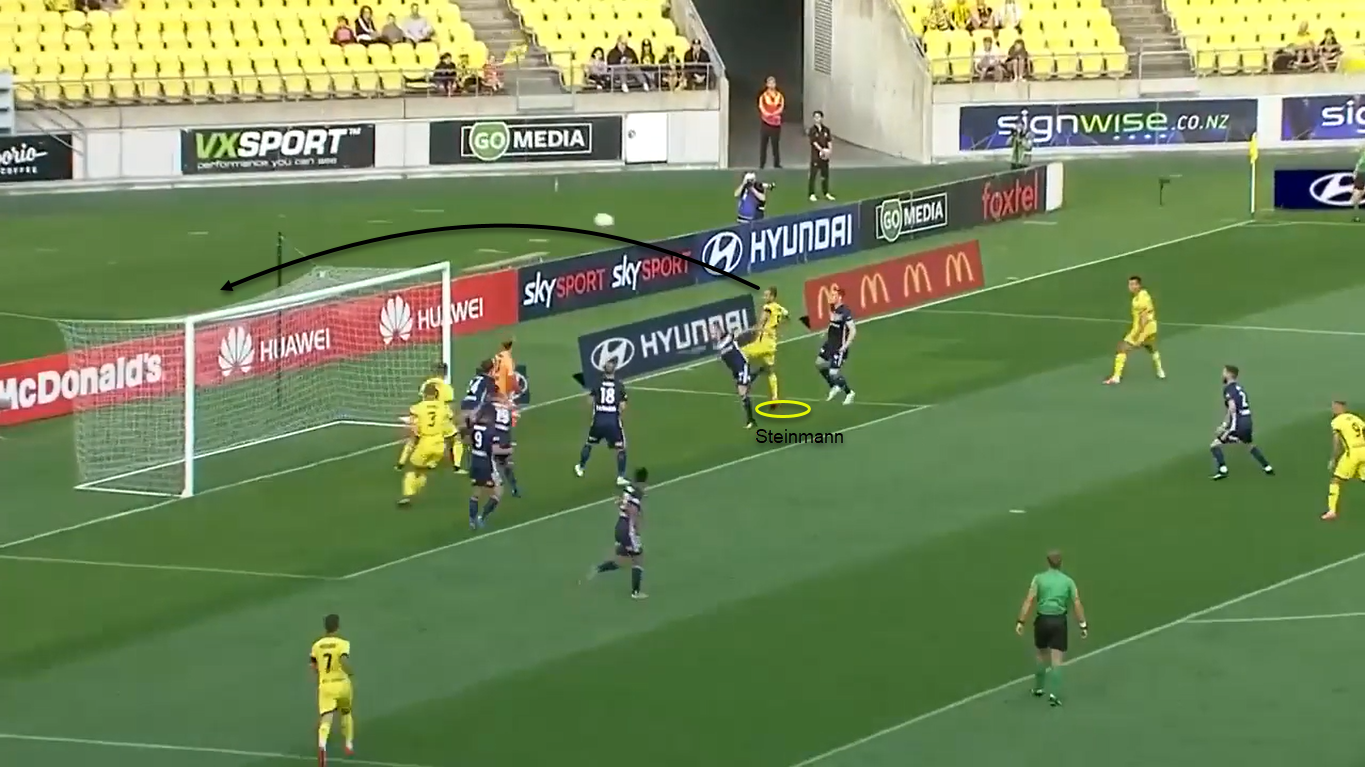 There is not much to expect from a no.6 when it comes to shooting. The tactical role clearly prevents having any judgement on his shooting abilities. The heat map shows us how he has limited activity in the final third of the pitch, due to which he doesn’t get into good shooting positions to have an impact.

However, he is a big target in set-pieces due to his height and aerial abilities. He took seven shots last season, after which three came from set-pieces but overall managed to get just one shot on target. At East Bengal, they must try to get the most out of him from set-pieces as he has all the ingredients to make it work. 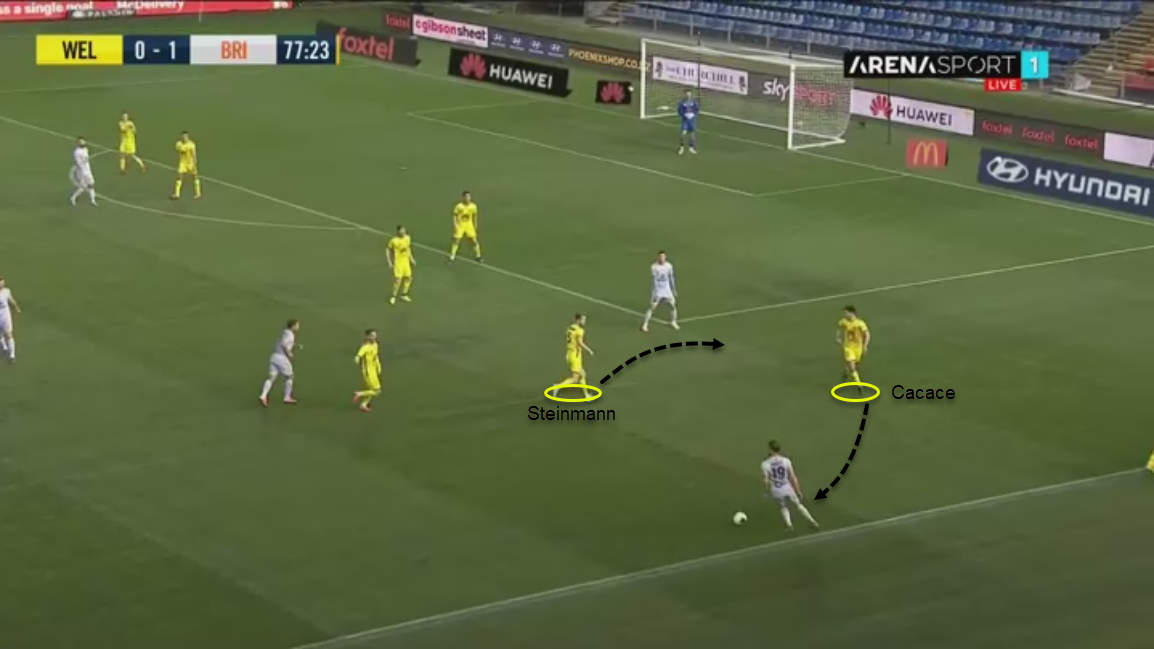 Steinmann was an elite performer in A-League when it comes to defending. Before we look at his individual performance, we must understand how the team functioned defensively and what was his role. When the ball went wide and the winger was higher up the pitch, Steinmann didn’t get drawn wide as they defended zonally. The pivot generally covered for the wide pressing full-back by dropping deep. He maintained his central watch sturdily. 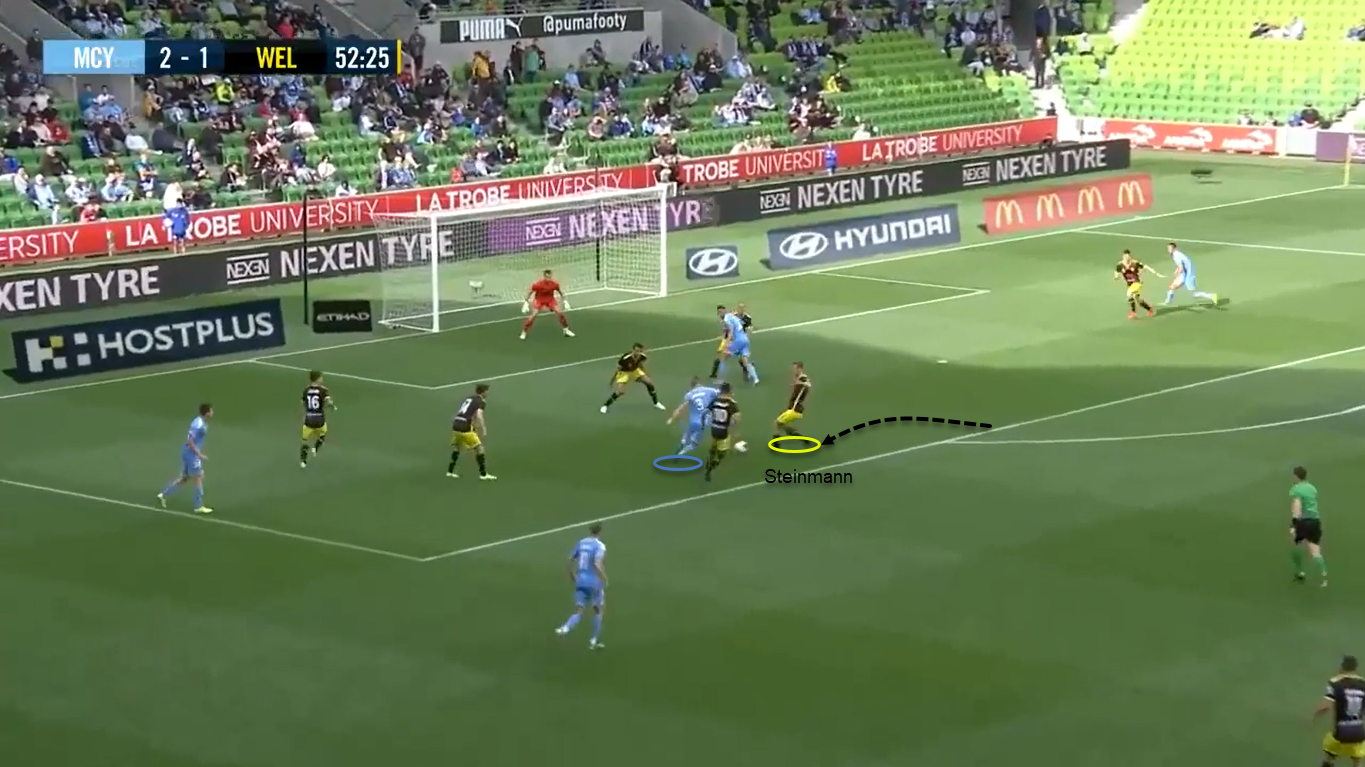 He stepped out and took charge in case of an infield runner. Steinmann stood his ground on most occasions and blocked off the attempts of opposition. He displayed a set technique of poke tackles from the side or back of the player to assist his backline and would then use his strength to get ahead of the player to retain the ball for his team. Steinmann secured 11.8 successful defensive actions per 90 last season. He managed to win 59.81% of his defensive duels in total. 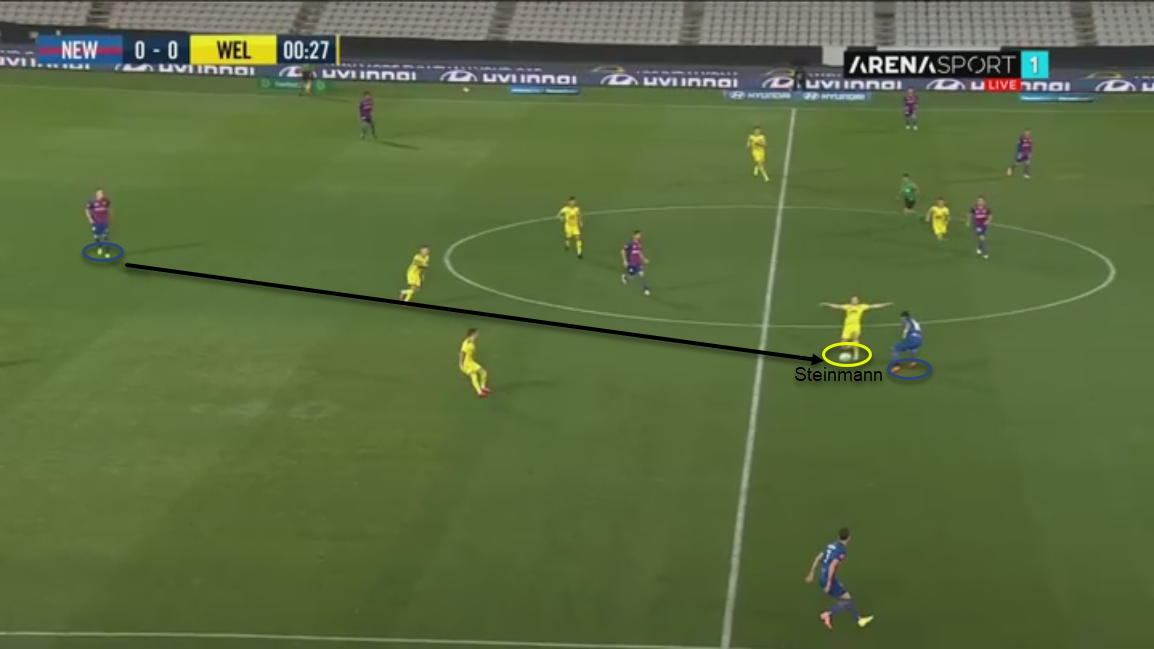 Steinmann’s true strengths lie in his ability to read the game and positional understanding. Which is why he is good at making loads of interceptions (7.23 PAdj Interceptions per 90) last season. Because of this, he made 183 recoveries last season, most of which came from middle third.

He applied pressure in the opposition’s half to counter-press after losing the ball but was relatively eased off in his own half. The German showed a composed yet alert demeanour off the ball and established a defensive positional superiority in Australia. 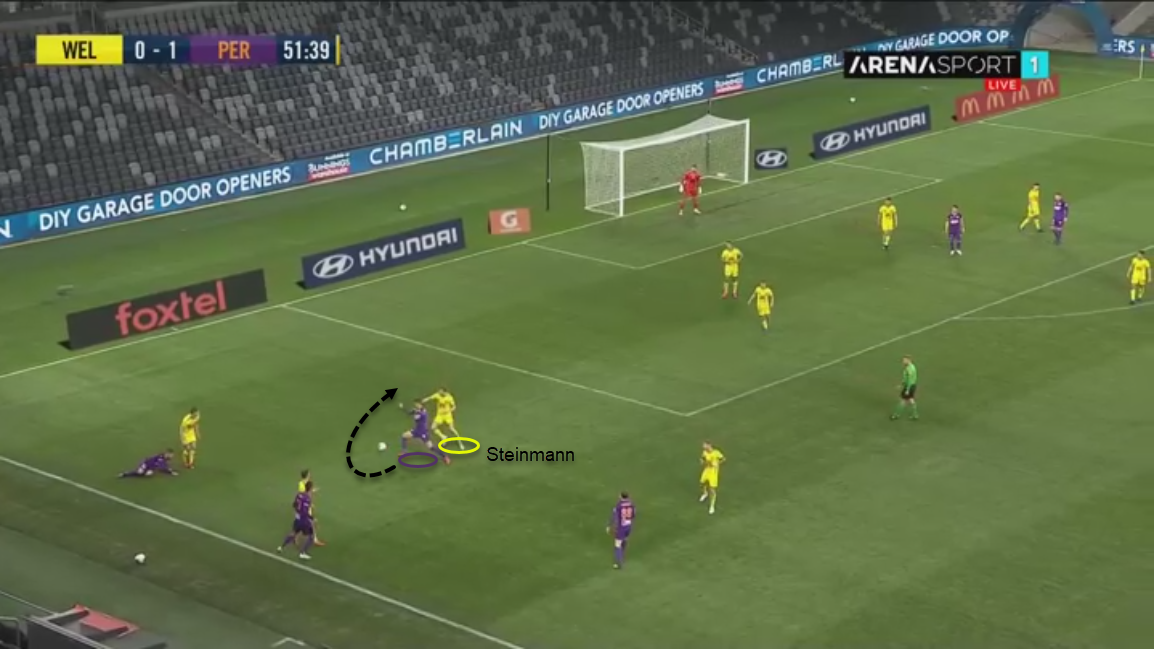 The German tends to get tight on players, showing their back to the goal to put more pressure. However, he lacks agility and recovery speed to deal with quick turns in such situations. Thus the player either manages to run free or get fouled by him. Steinmann committed 1.54 fouls per 90 and got nine yellow cards in the last campaign. He needs to be wary of defensive transitions because of insufficient recovery pace and work towards being a bit more disciplined.

Steinmann usually positions himself in the centre of the field during the opposition goal-kick. He is tasked to win the first header for the team and the same duties are applied during defensive set-pieces. He contested 2.87 aerial dues and won 49.25% of them. 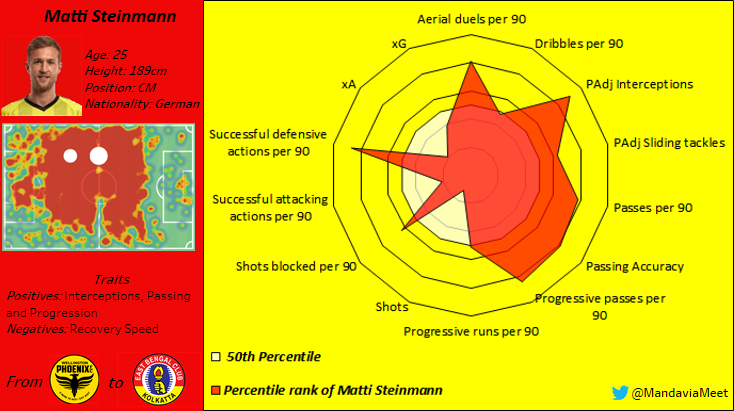 East Bengal have signed a player who is positionally supreme both on and off the ball. He demonstrates great intelligence along with physical power in his game. If Fowler adopts a different system and tactics to play a midfield three then Steinmann should be utilised as the CDM. He will often drop between the centre-back pair to aid progression, cover spaces in transition and launch long balls from the deep. If a centre-back gets injured, Steinmann has qualities to fill in for the player at the back. As a 25-year-old, the German midfielder is still deemed as a young foreign signing in the ISL.