As is tradition, the first round of the DFB Pokal opened the season for teams in the Bundesliga, and although Sandhausen have already played twice in the 2. Bundesliga, losing both fixtures, this was our first glimpse of what RB Leipzig look like, not under departed manager Julain Naglesmann (now at Bayern Munich), but under new man in charge, American, Jesse Marsch.

Of course, Marsch is well known to followers of Red Bull football, given his season with Red Bull Salzburg and time before that with New York Red Bulls. As such, before you even see a Marsch side play, you can probably guess what they’ll look like, with healthy servings of intense pressing and vertical, passing football. It’s difficult to tell too much about his Leipzig team from their first offering, particularly seeing as they had well over 70% possession, an unusual amount for a team under the Red Bull banner, but we did see flashes of what is likely to come.

This tactical analysis will provide an in-depth analysis of the key tactics Marsch used in his first game in charge, as Leipzig ran out 4-0 winners on the day. 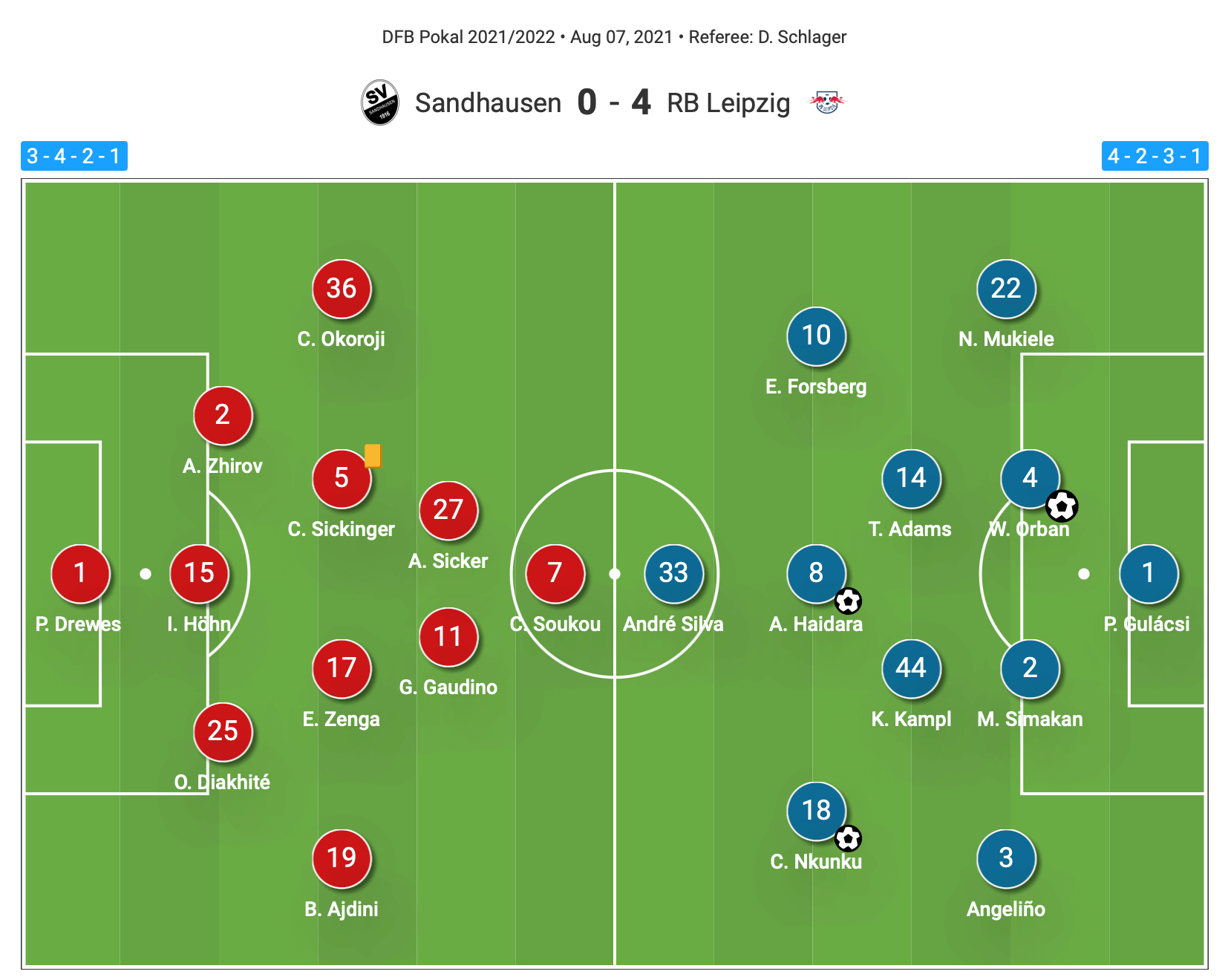 Sandhausen operated in a 3-4-2-1, dropping into a back five when defending deep, with the front five remaining compact close to the defence. The double-pivot and the two attacking midfielders in front aimed to keep the centre of the pitch compact, which had mixed success over the course of the game.

Leipzig chose to field a very strong starting XI, in a 4-2-3-1 with Mohamad Simakan and Andre Silva coming in at centre-back and centre-forward, respectively, for their first competitive games for their new team.

Leipzig’s full-backs pushed on high and wide in the build-up phase, allowing both Christopher Nkunku and Emil Forsberg to come inside and giving Leipzig a central presence of five, including the midfield three of Tyler Adams, Kevin Kampl and Amadou Haidara. Even with Sandhausen looking to crowd the centre, it allowed Leipzig to still play through the centre, consistently finding passing lines. However, Angelino and Nordi Mukiele, Leipzig’s full-backs, gave plenty of height and were also regularly found in space out wide, where they could initially isolate the Sandhausen wing-backs in a 1v1, with late runs being made in behind in the half-spaces by Leipzig’s midfielders.

Building up from the back, Adams and Kampl would drop very deep, either going in between Simakan and Willi Orban in the Leipzig defence, or both dropping either side in the half-space. We can see this in the following image as Haidara sits just in front of the double pivot, who are spread wide, as Angelino moves up the left-flank in response. 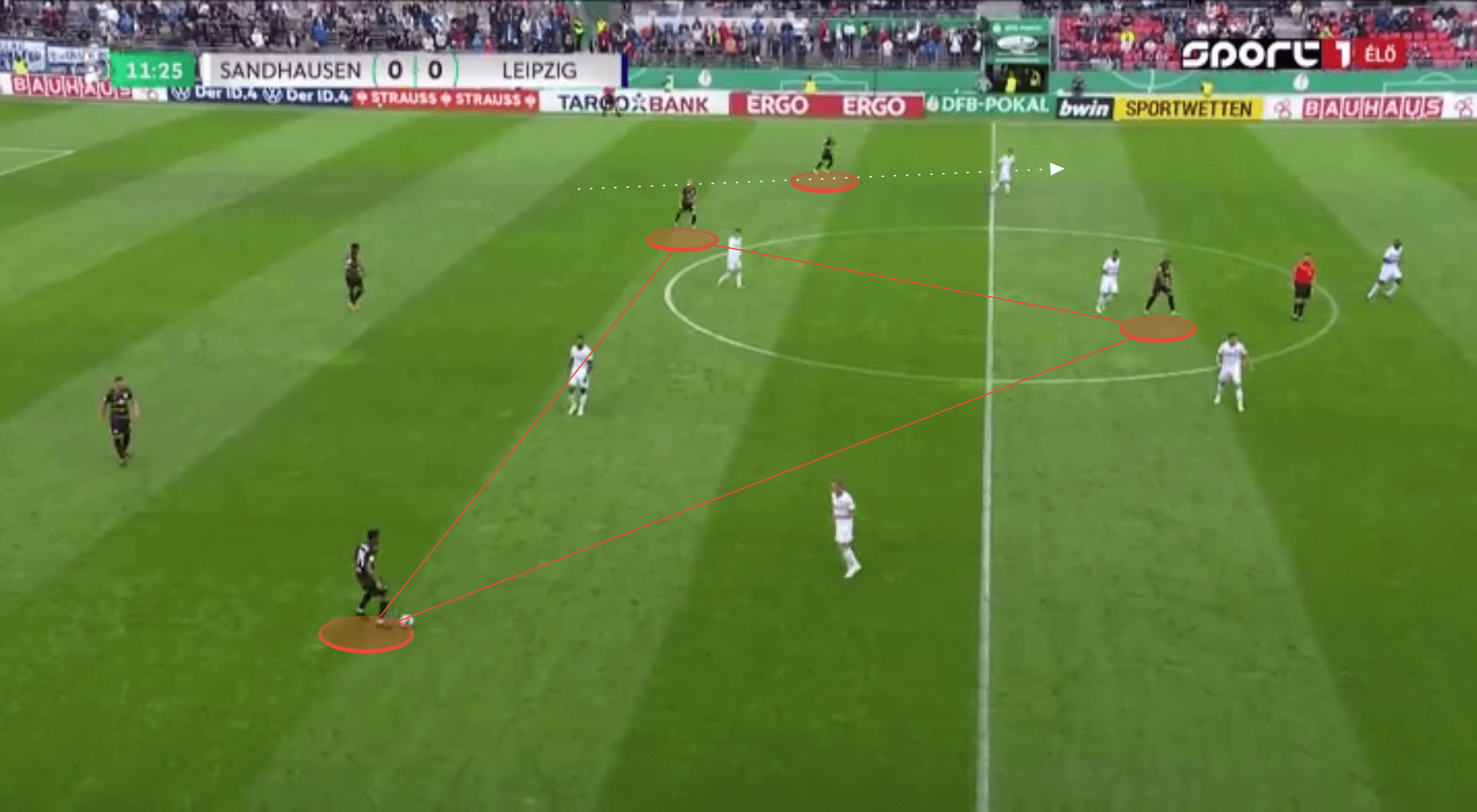 This three or four which they built from the back with gave them a strong central presence which gave protection against loss of possession, but also provided the freedom for Angelino and Mukiele to push forward. 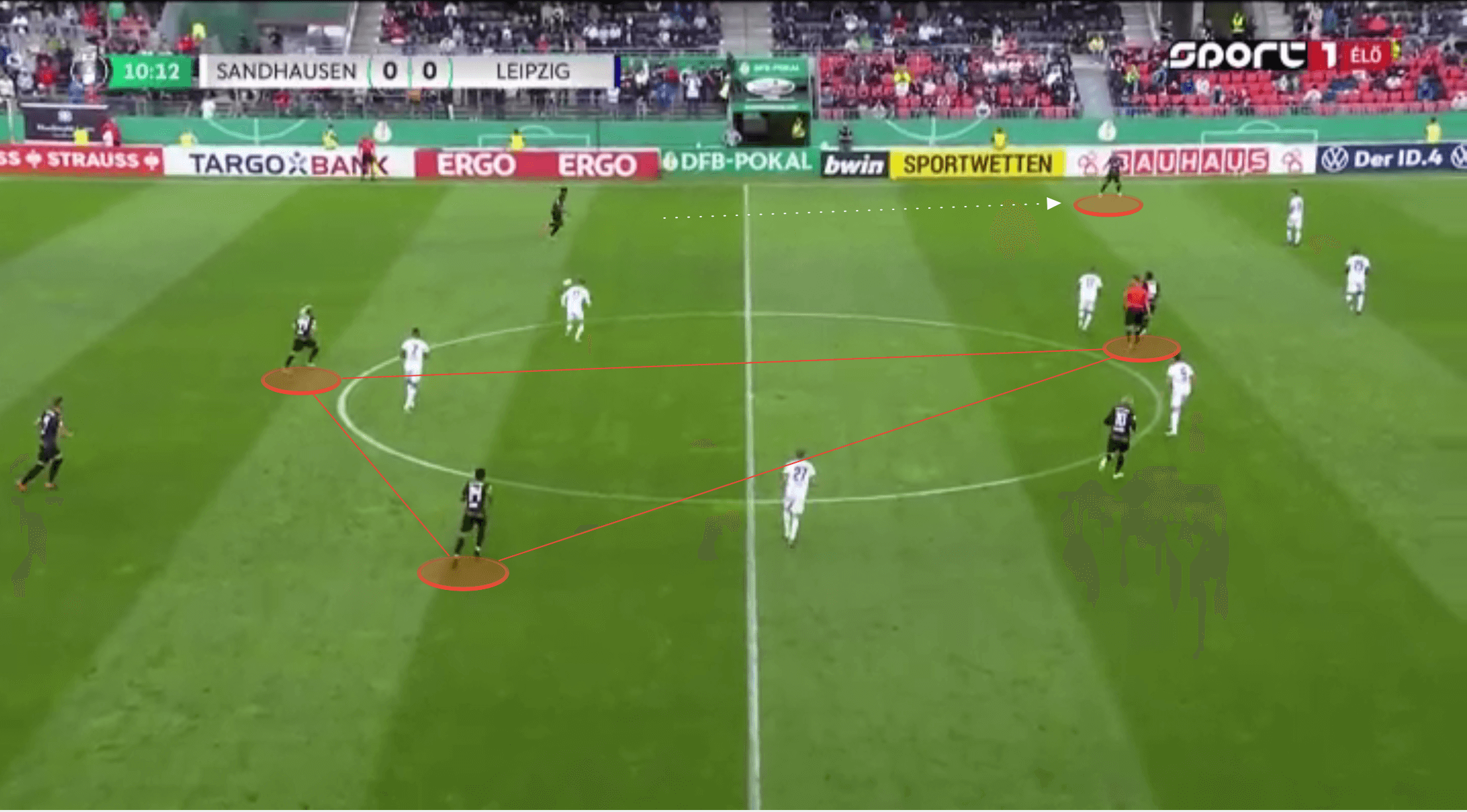 Quick breaks against a high line

In developed Leipzig attacks, Sandhausen were relatively disciplined in sitting back and remaining compact and organised. As such, Leipzig had far more success when preventing them from having the time to get into this shape.

Firstly, as you would expect, Leipzig showed quality speed of forward play upon winning possession in high areas.

As soon as they won possession they looked for a forward pass option, whilst players ahead of the ball were sharp to drop off their markers to provide this option.

In the image below Tyler Adams wins the ball, immediately playing to Nkunku who is ready to receive. Amadou Haidara is also highlighted, just ahead of Adams. Leipzig did a terrific job of always supporting this forward pass with a short option behind the ball, structuring the passes in an “up, back and through” pattern. 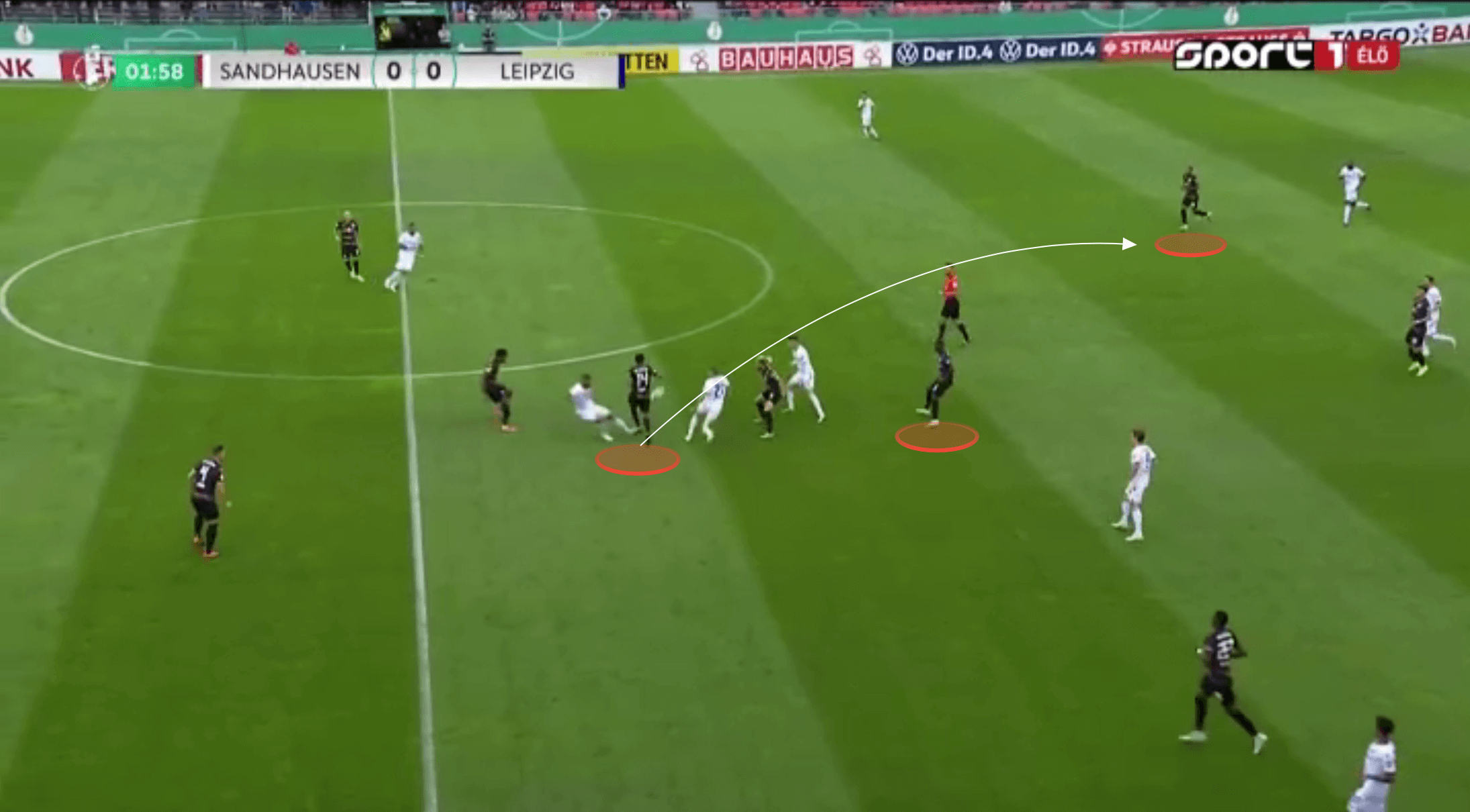 Haidara was instantly able to get on the ball facing the Sandhausen goal. With Nkunku’s movement drawing out the right-sided centre-back, centre-forward Andre Silva was essentially left with a 1v1. He used misdirection to draw his marker to one side before being played in behind. This was only in the third minute of the game, and whilst Andre Silva was unable to convert, it was an instant statement from Leipzig that they were going to be quick and incredibly effective at forging attacks should they win possession in the midfield. 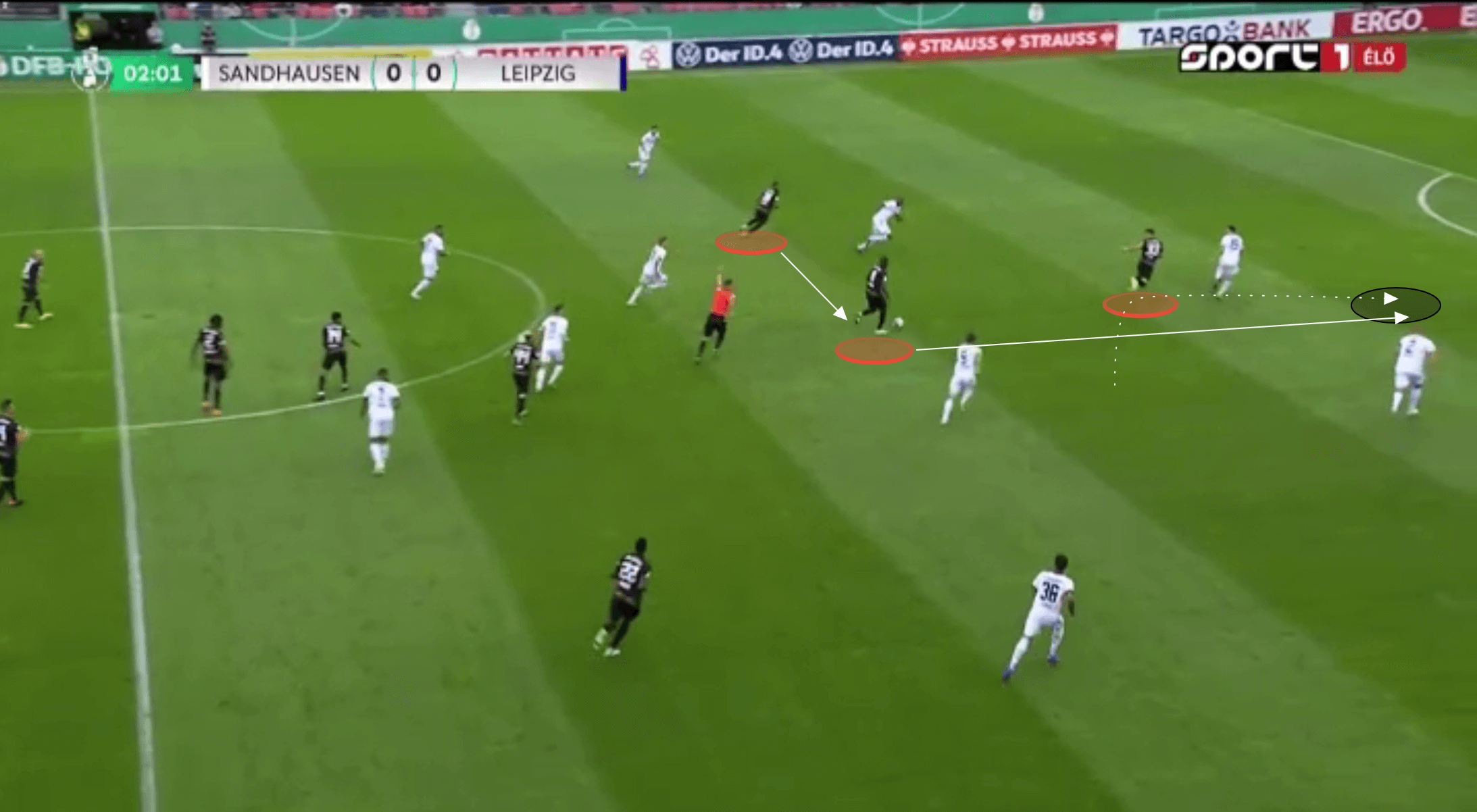 We can see something similar in the following two images, where Leipzig broke quickly at the end of the first half. A clearance by Sandhausen goalkeeper Patrick Drewes was intercepted by Mukiele. The right-back headed into the feet of Andre Silva, and similar to Haidara’s movement in the previous example, Emil Forsberg spins off of his marker to receive the ball facing the Sandhausen goal. 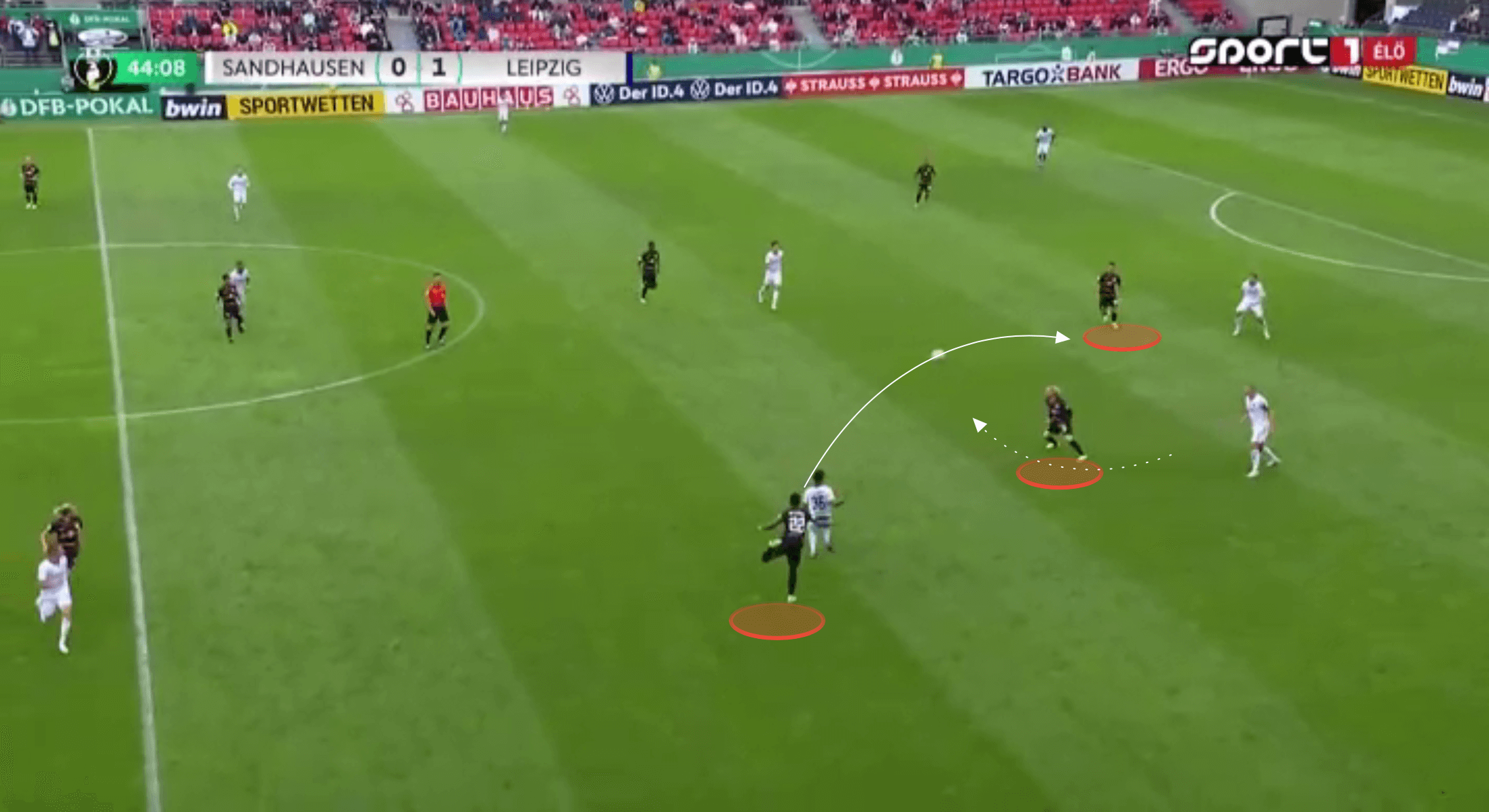 With Andre Silva’s movement drawing the centre-back forward, just as Nkunku did in the previous example, Nkunku is this time able to benefit, moving in behind. Once again Haidara is close to the forward line, and he makes a movement to the left of Nkunku, creating a 2v1 against Oumar Diakhite. 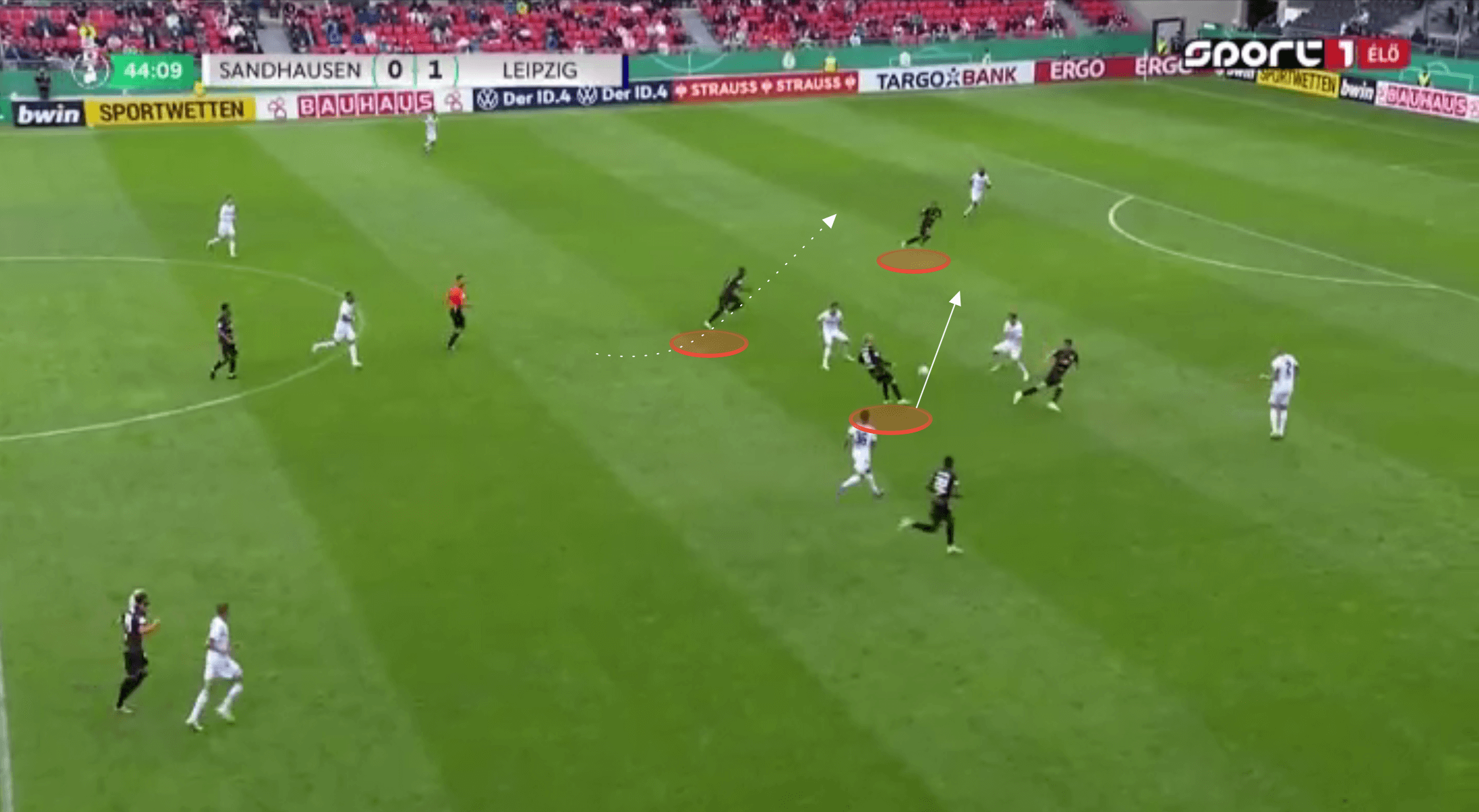 Sandhausen’s backline would naturally push forward when their midfielders or forwards had possession. However, despite packing the backline with five defenders, they were easy to break through, particularly on transition where they were slow to cover space in behind. Leipzig took full advantage of this. Their third goal came from winning possession back in midfield and we can see Andre Silva in possession in the image below. He is able to thread the pass between Diakhite and wing-back Bashkin Ajdini, for Nkunku to easily run on to. 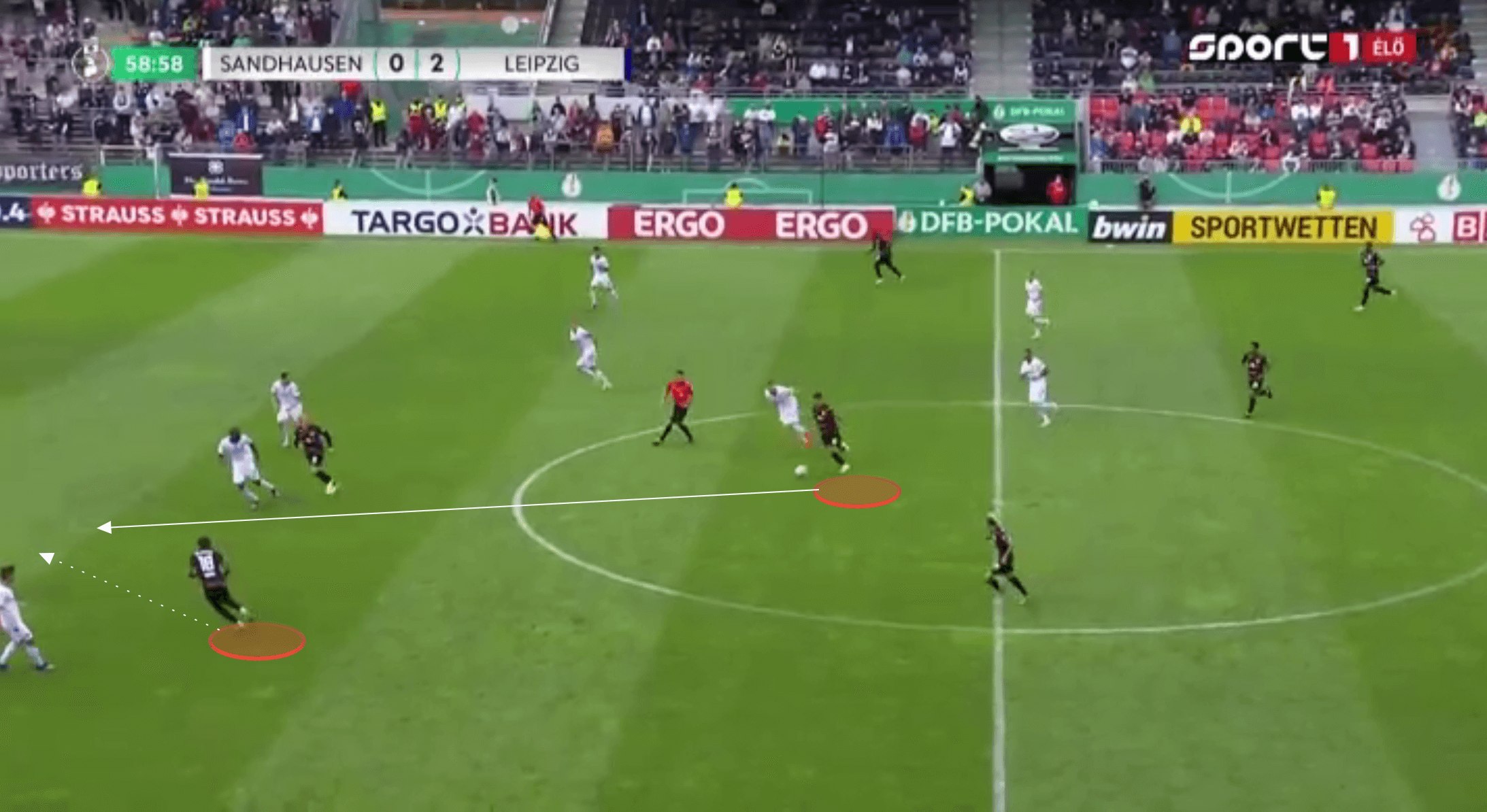 Similarly, albeit towards the end of the game with Sandhuasen’s energy levels dipping, but the next two images show the speed at which Leipzig would break forward, and how Sandhausen struggled to deal with this.

A turnover of possession was quickly secured by Leipzig, and with Brian Brobbey out of the picture below, already occupying the centre-backs in his centre-forward role, he is quickly joined by the three highlighted Leipzig attackers, who push forward as the ball is secured. 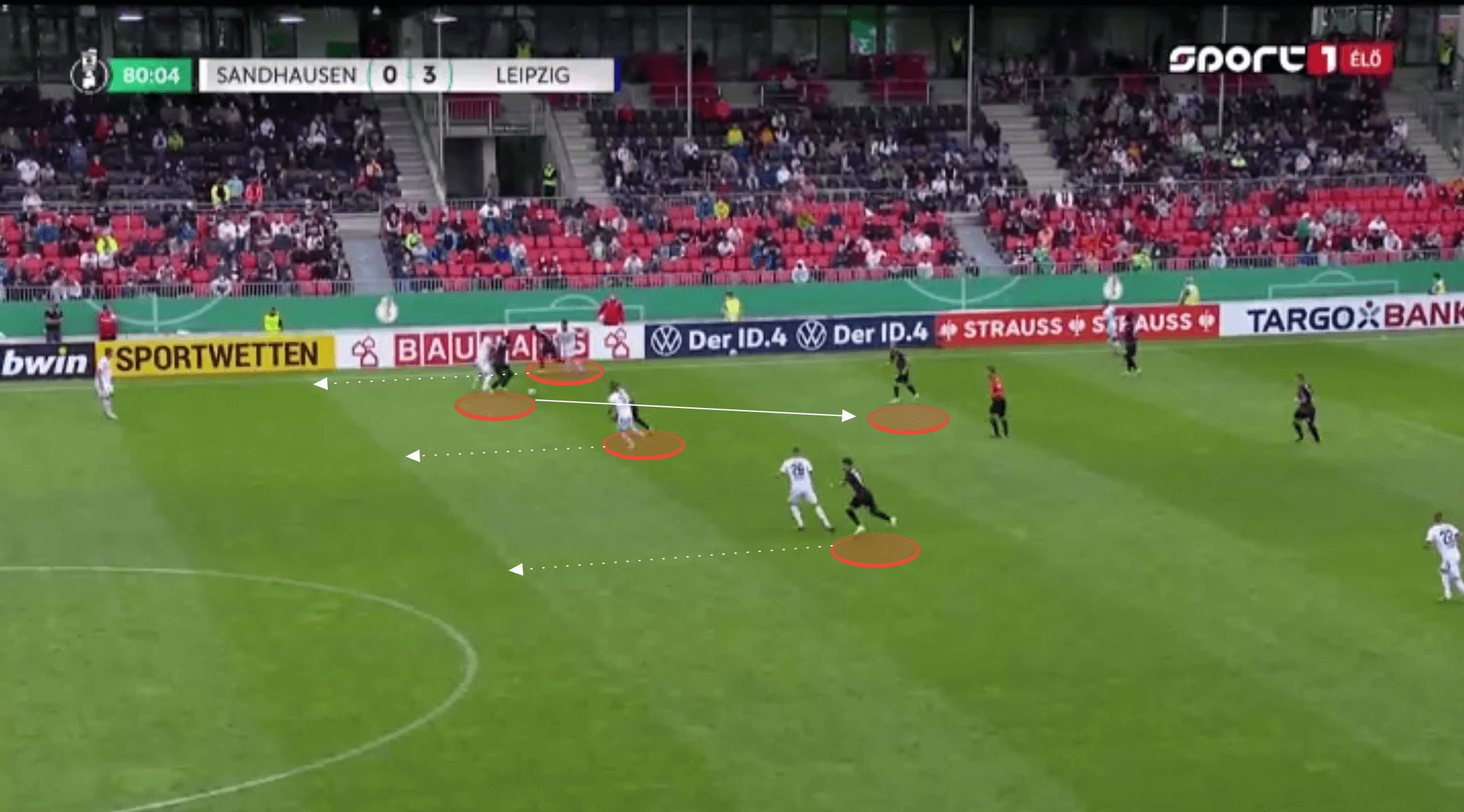 This turns the counter-attack into a 4v2, and we can see the number of Sandhausen players now removed by the pass, and failing to get back. Even with numerous defenders, having four attackers driving forward makes it so difficult to play against, but obviously, with only two in this instance, Leipzig were able to easily work the overload to their advantage and score their fourth and final goal of the game. 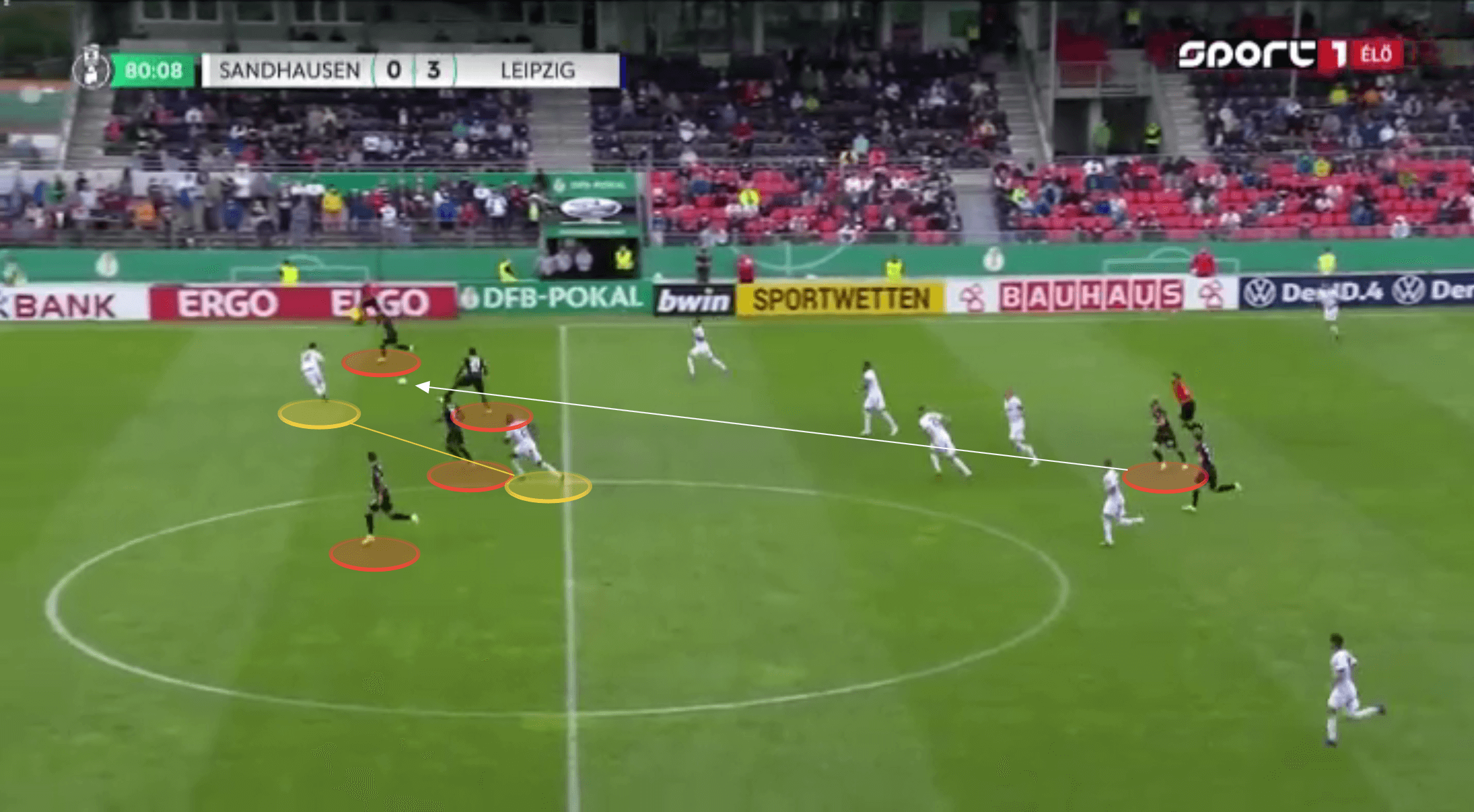 Whilst we’re focusing on Leipzig’s tactics from the game, it would be remiss to not mention anything from Sandhausen because despite the scoreline they played well. There are perhaps areas for improvement for Leipzig too that Sandhausen highlighted.

Leipzig dominated possession and managed 15 shots on goal over the course of the game. Sandhausen had just six shots the entire game, and two of these came from set-pieces. However, a glance at the xG from the game suggests that it was anything but a one-sided affair, and if anything Sandhausen were unfortunate to score. Leipzig’s xG for the game was 2.05, whilst Sandhausen had an xG of 1.37

Over a two minute period from the 75th to the 77th minute they managed three high xG efforts from two attacks, and should have scored both were it not for the excellent goalkeeping of Gulacsi.

Leipzig allowed their defence to be matched up in a 3 v3 when Angelino was pulled out. However, their double pivot screened the defence, and normally one of these players would simply filter in to the back line to cover the defender who had been dragged out.

We can see this in the image below. 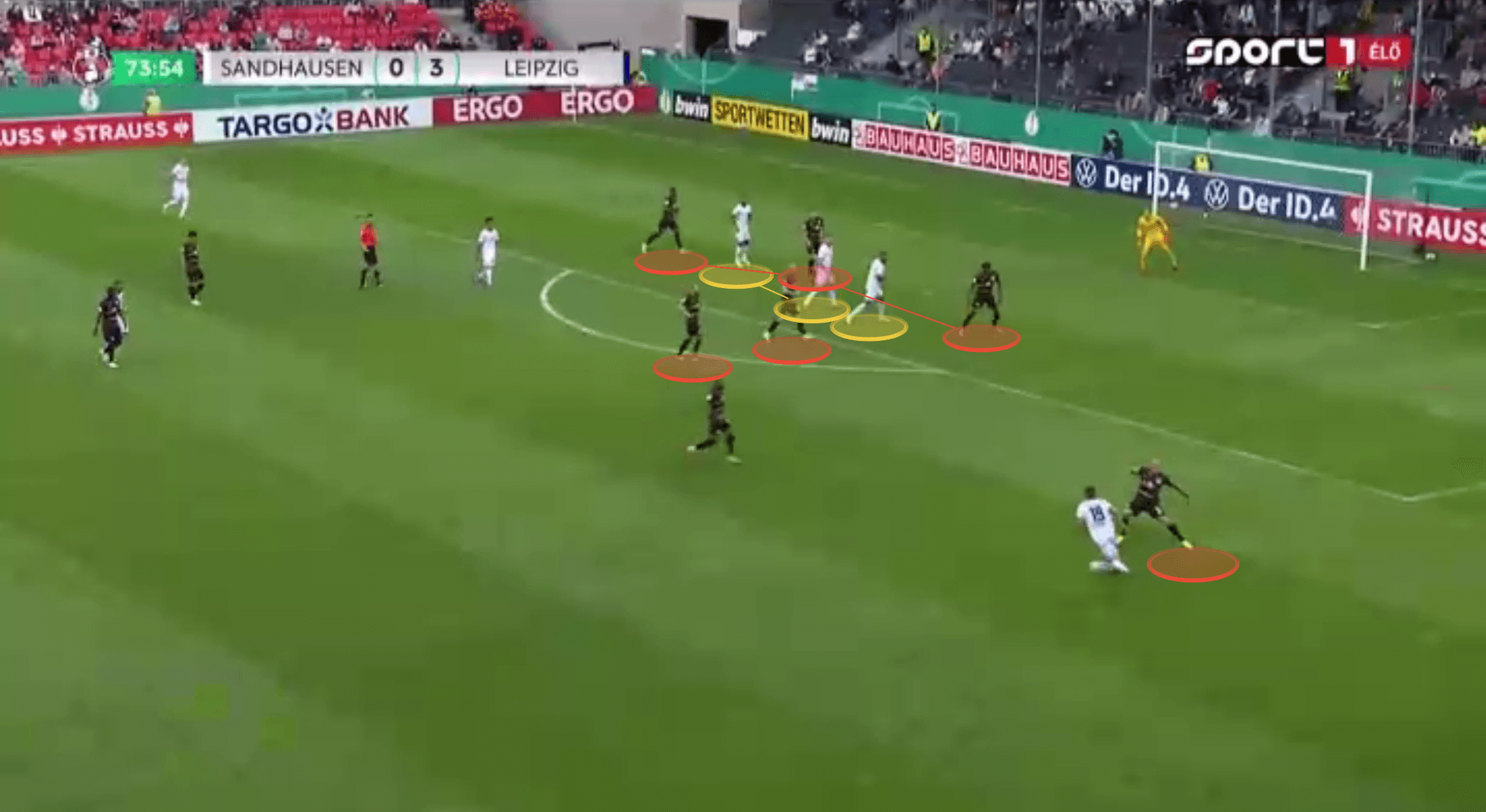 However, in this example, a ball was played over to the far-side, drawing Mukiele across. 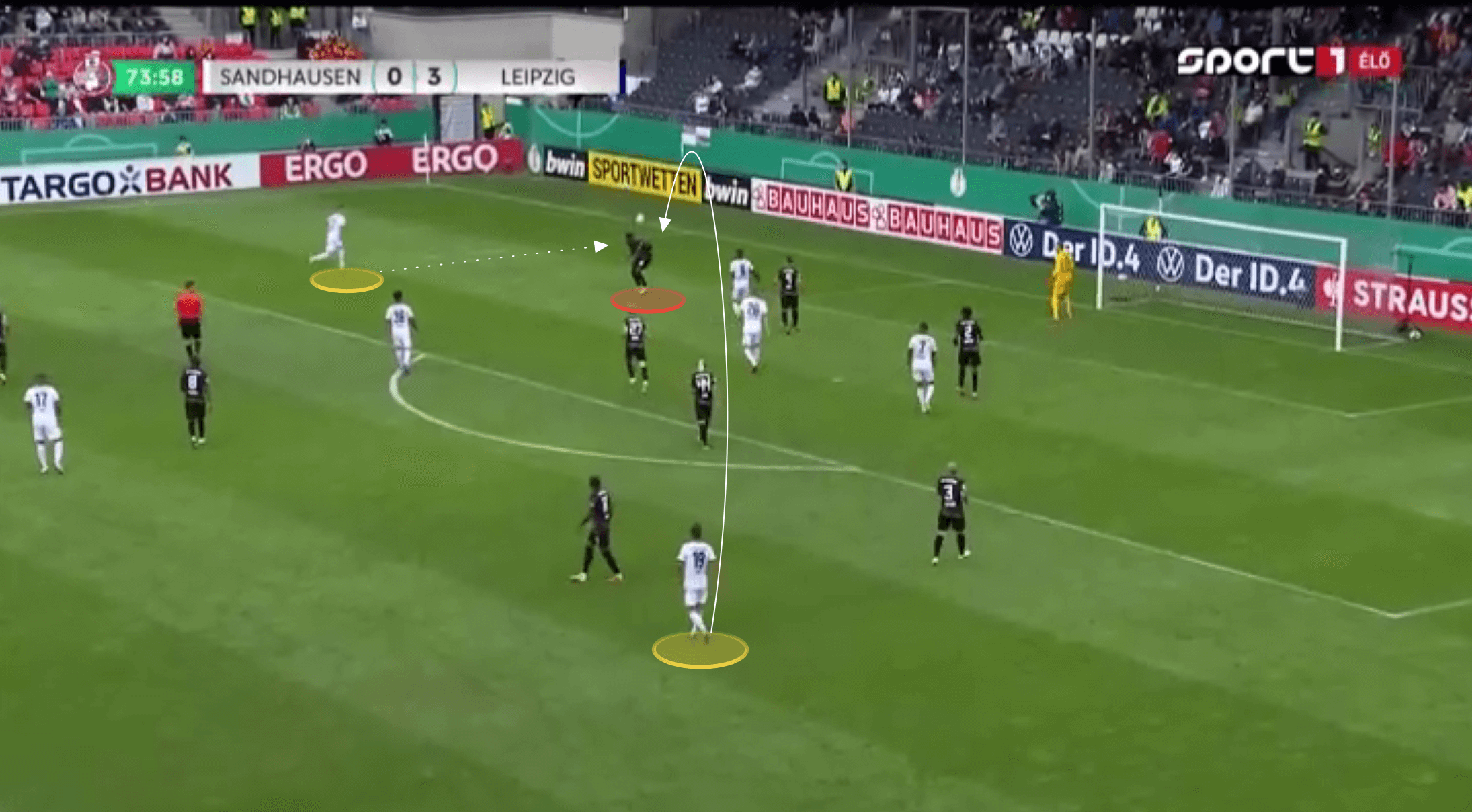 Neither pivot dropped in to cover Mukiele and this left a 3v2 within 10 yards of goal. As the ball was played across, a dummy from the near-side forward drew the highlighted Leipzig defender towards them and left Bachmann free. He would have scored had it not been for a terrific save. 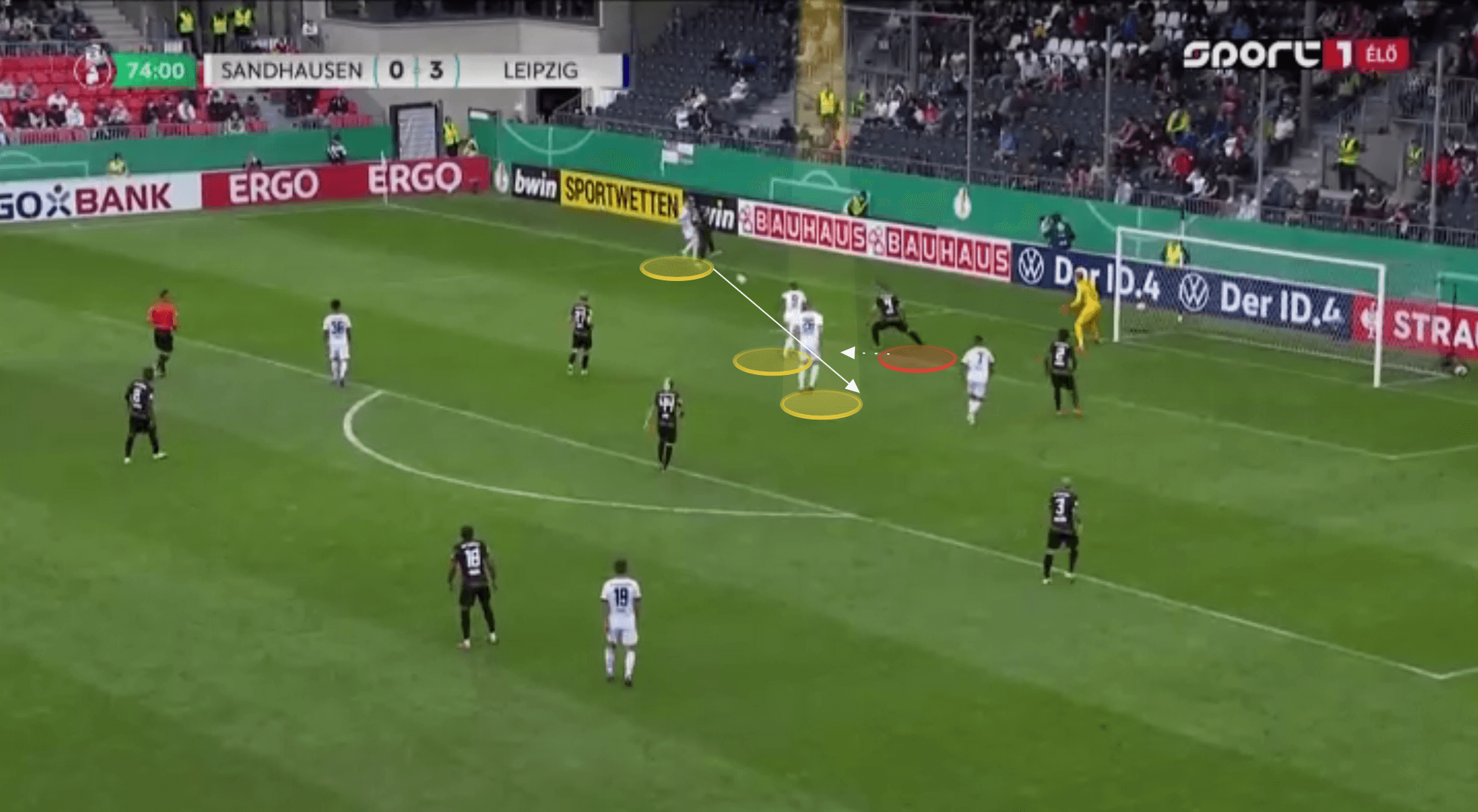 Gulacsi was called upon once again two minutes later. Again there were some issues with Leipzig’s shape, with neither highlighted defenders providing ample cover behind the aerial duel. Mukiele in particular is positioned far too close, where he could potentially be taken out by the same ball as his inside centre-back. Either way, the knockdown went behind the Leipzig defence, forcing Gulacsi off his line. 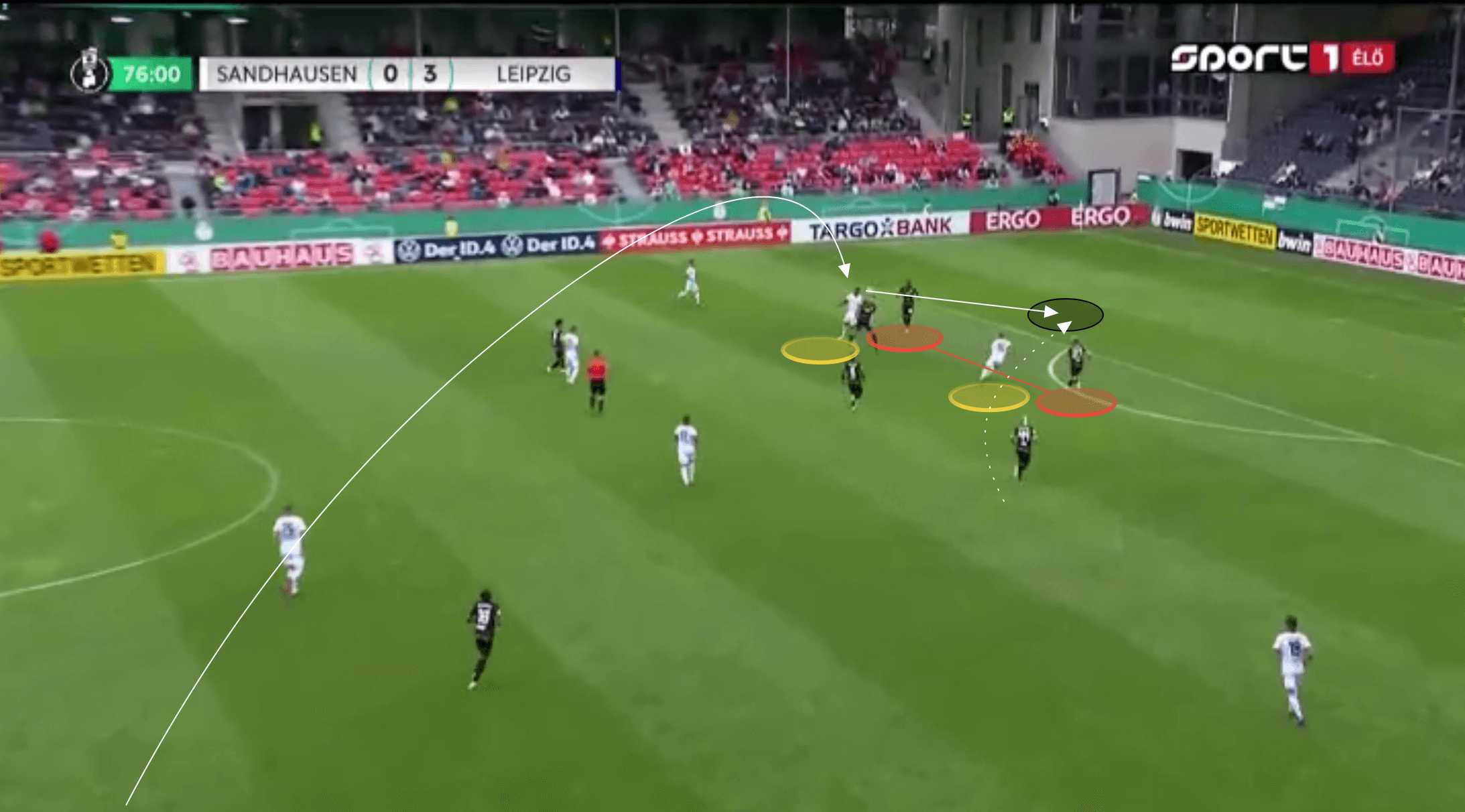 The final thing worth mentioning from Leipzig’s point of view was the number of set-pieces they forged goal-scoring opportunities from. In fact, five of their eight shots in the first half resulted from set-pieces.

There was an interesting free-kick routine where both players over the ball dummied, before Angelino hit the free-kick on the third time of asking. It was designed to isolate Orban at the back post, who has also been highlighted in the image below. 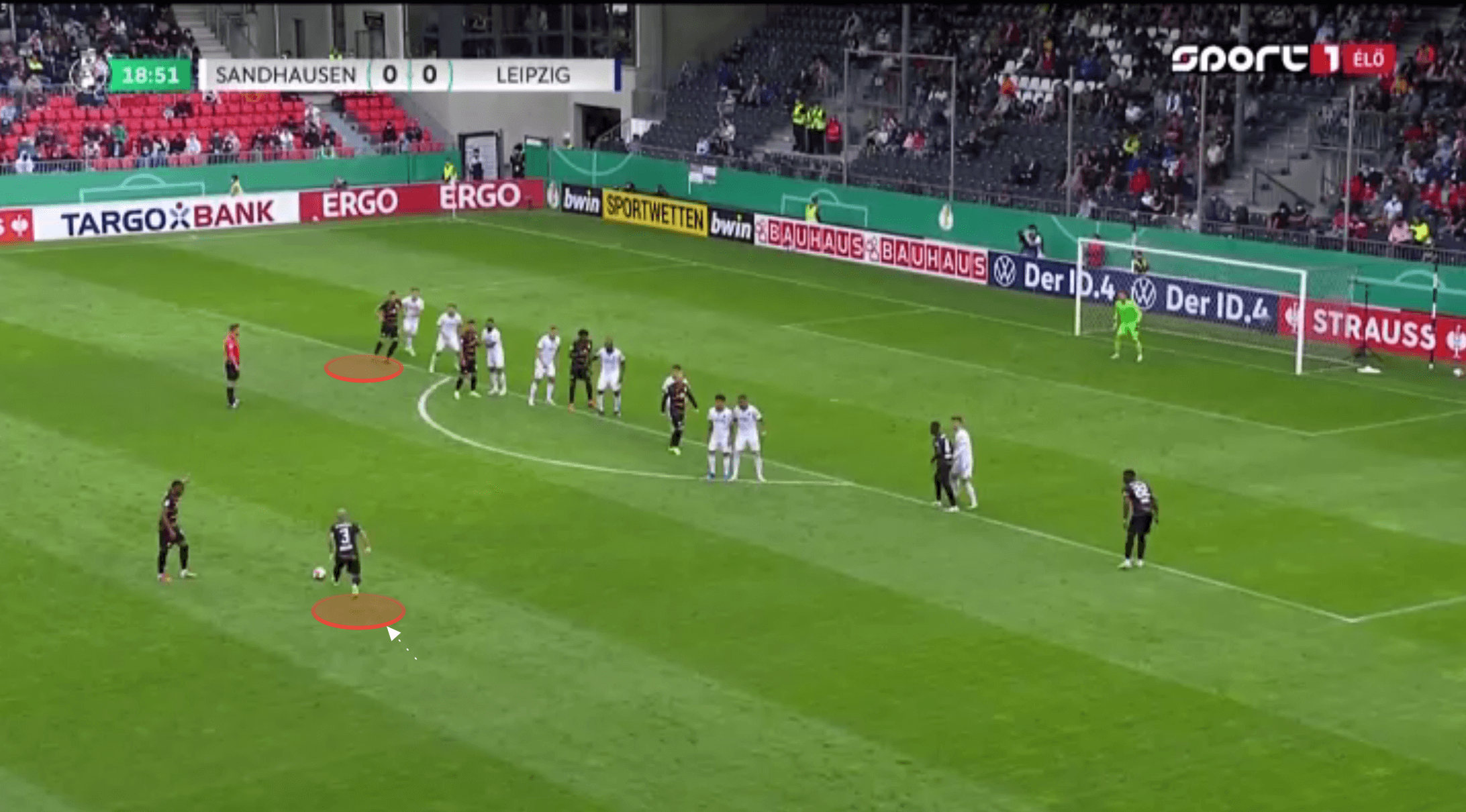 The second dummy forced Sandhausen’s defensive line to drop prematurely, giving Orban the space to time his run in behind. 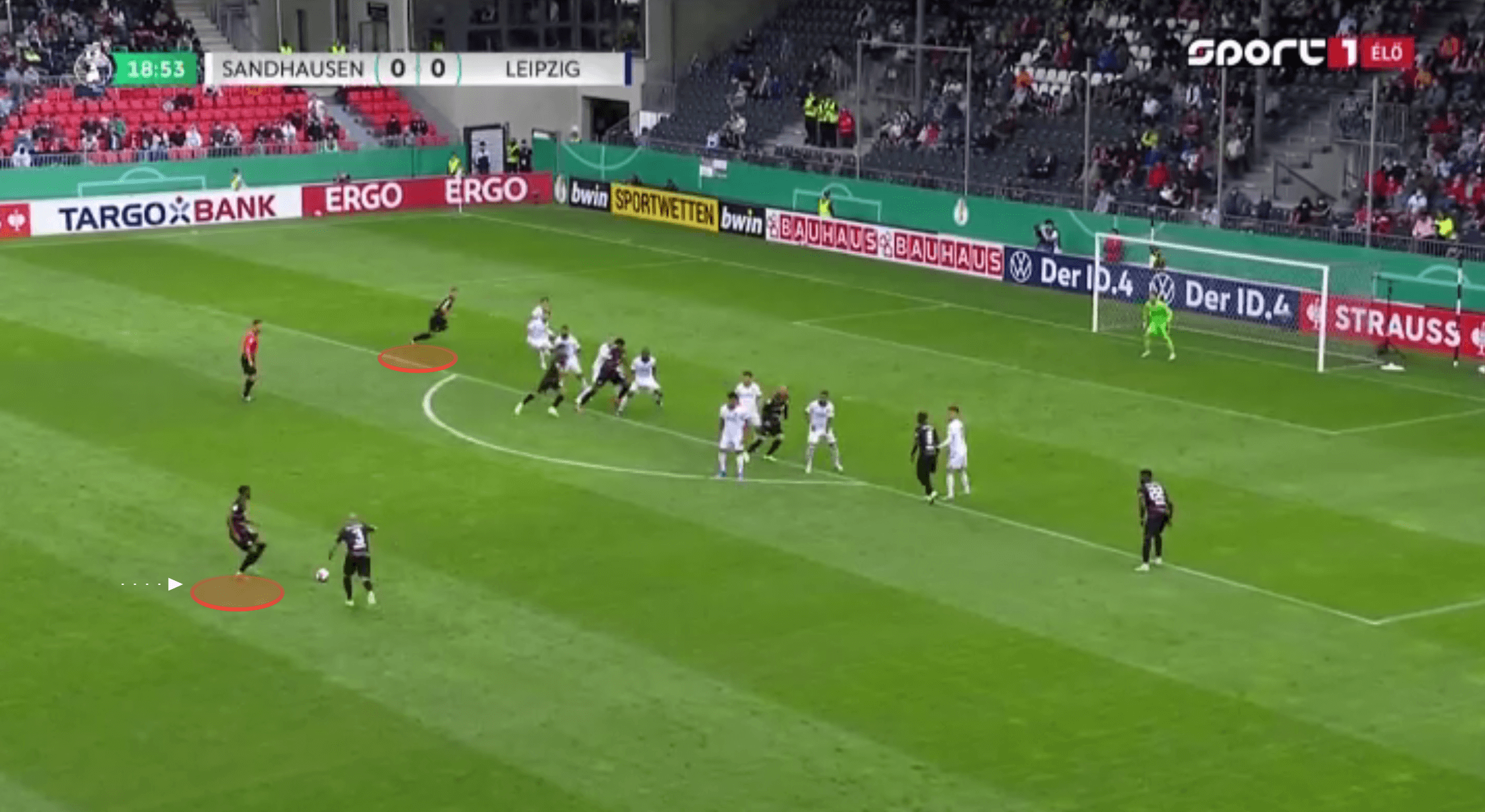 In the final image we can see how he was found by the cross, now goal-side of his marker and, most importantly, onside. 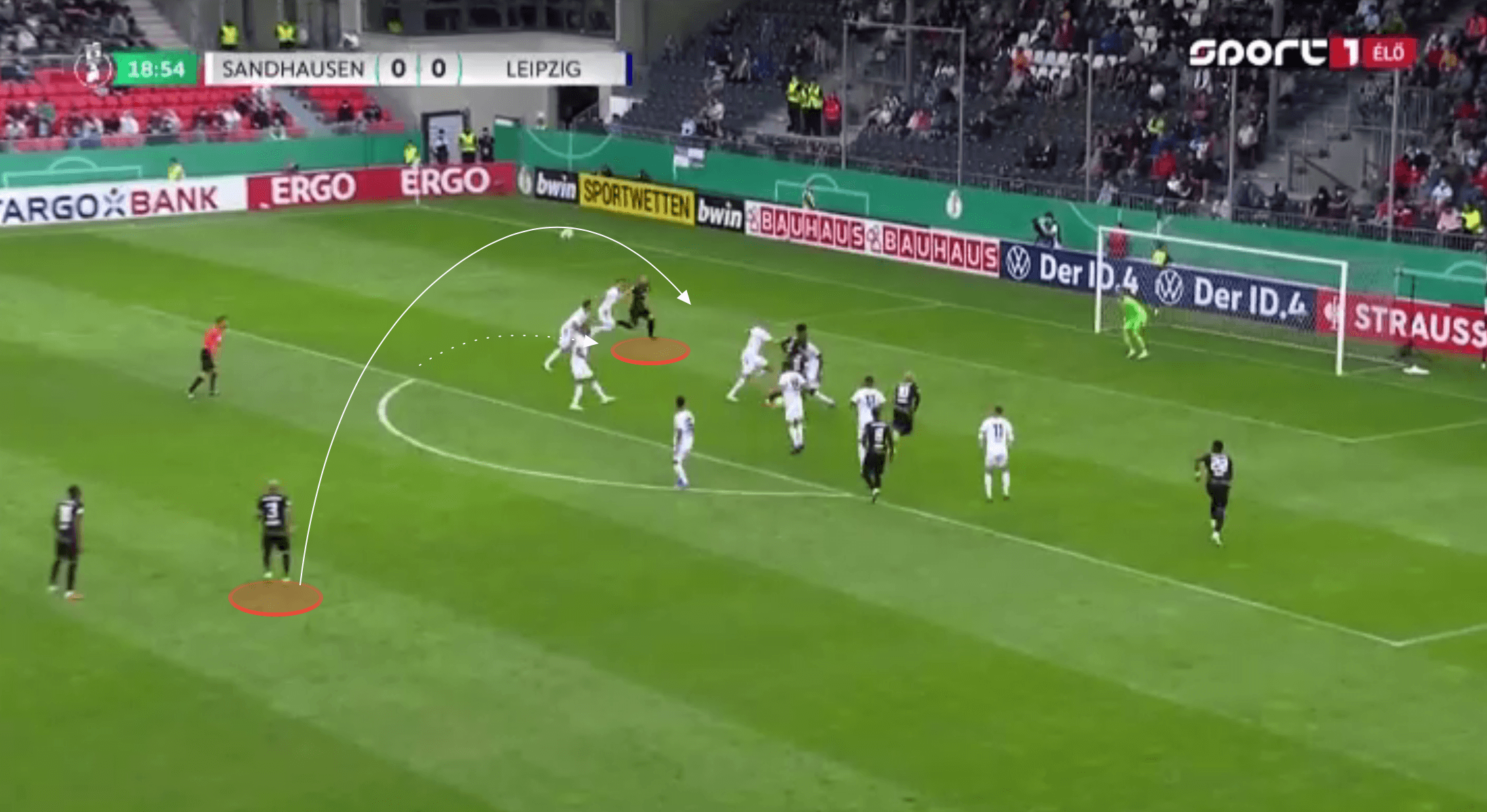 Their most effective corner routine from the game came from a set-up where two blockers, positioned just inside of the front post, ran towards the past or just beyond it, clearing out space for three players (standing on the edge of the box), to attack. 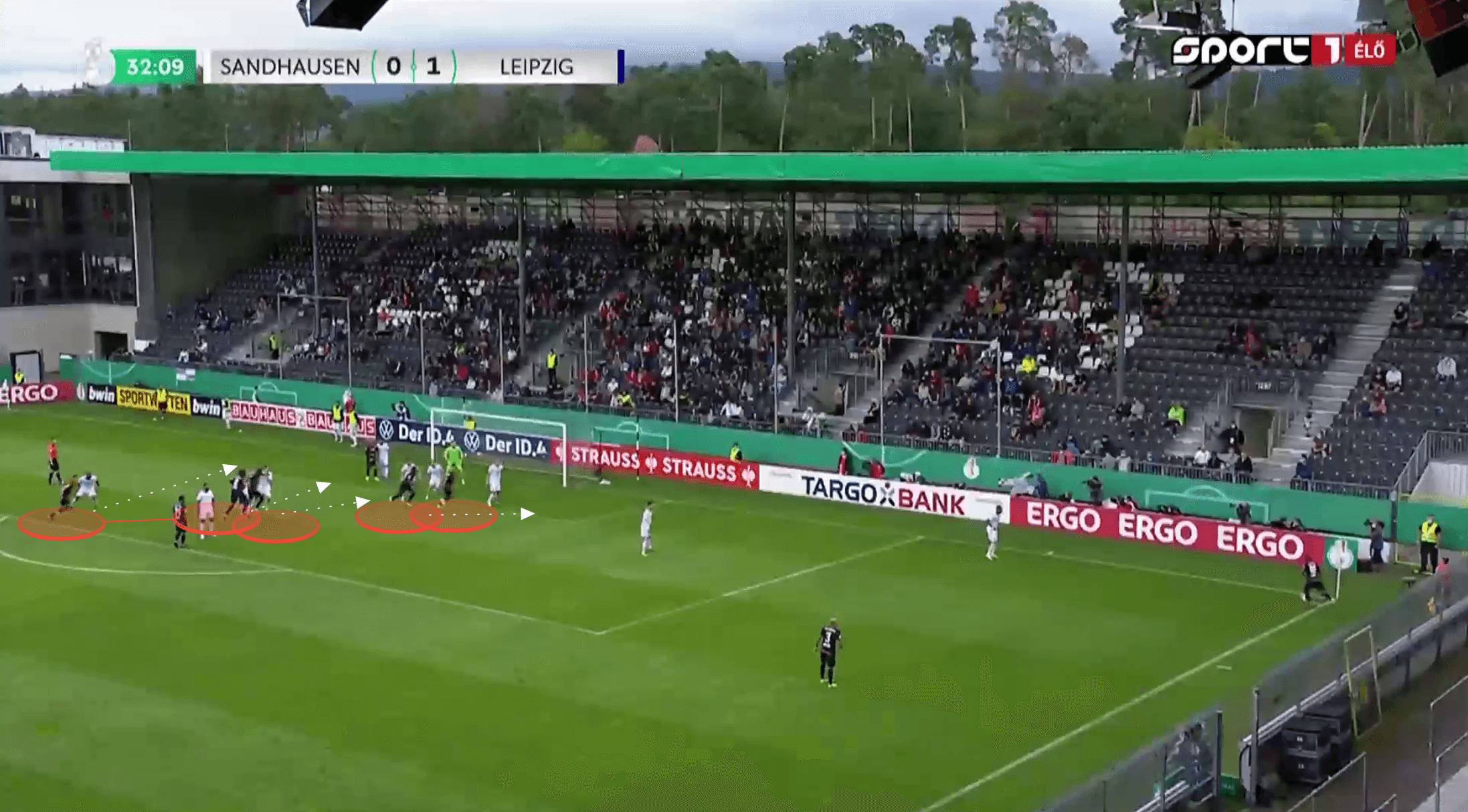 As the ball was played over the two blockers, the three players spread across at a stagger to reflect the ball being curled away from goal, with one attacking front post, one the centre of the pitch, and one at the back post. We can see this pattern occurring in the image below. 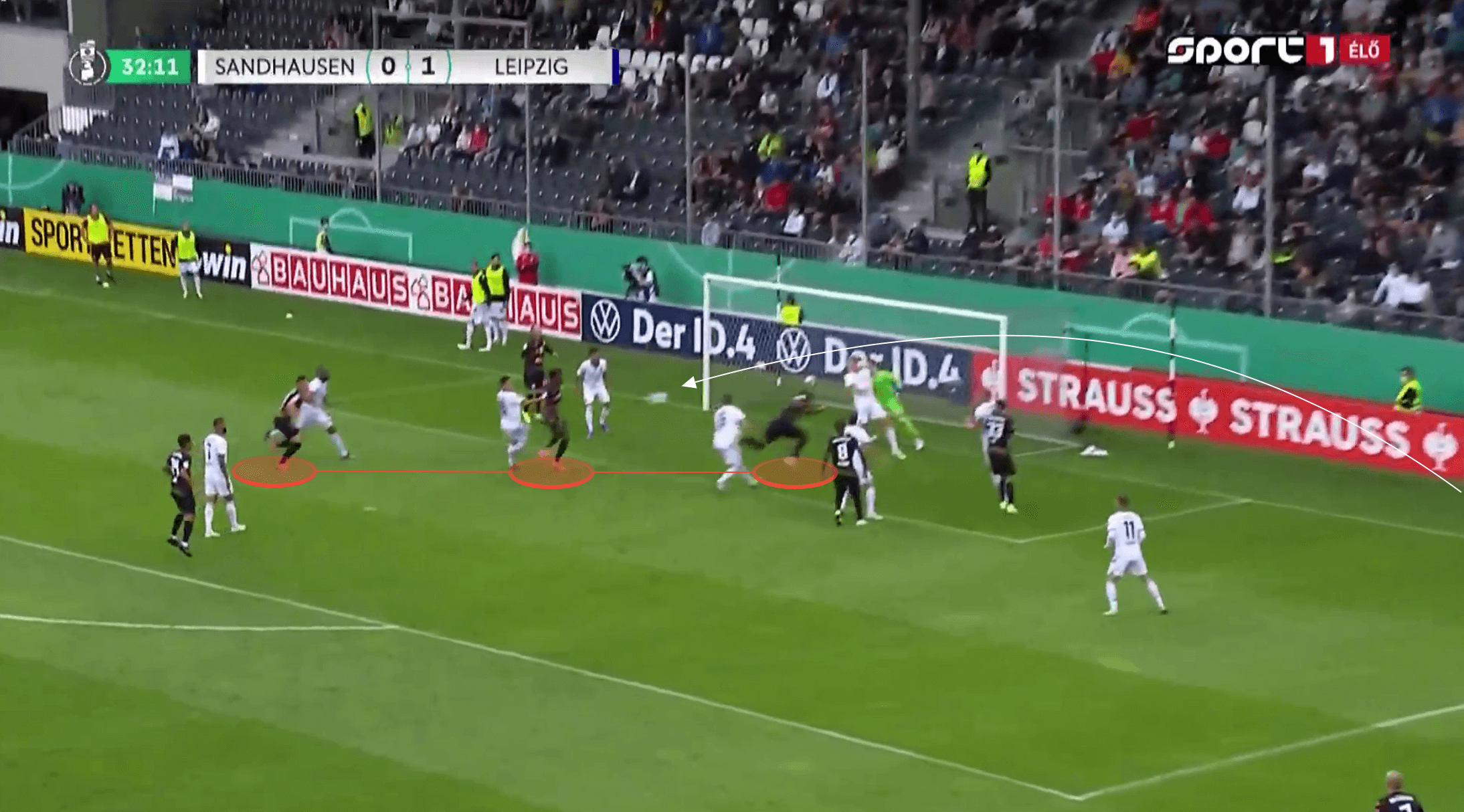 It’s hard to tell too much about Marsch’s Leipzig side just yet, however, they exhibited some excellent, direct, vertical passing football which cut open Sandhausen’s defence on a number of occasions. They showed some interesting structures in possession which gave freedom to Mukiele and Angelino to push forward, and Nkunku and Forsberg to roam inside, and looked a threat from dead-ball situations. We were able to see Simakan and Andre Silva in action too, as well as a late cameo appearance for Brobbey – all summer signings.