Marcus Edwards is among the likes of Jadon Sancho of Borussia Dortmund and Reece Oxford of Augsburg, who have moved abroad after failing to see a clear path for progression in English football. The Tottenham Hotspur academy player did not see himself fitting into Pochettino’s plans anytime soon, and so took the initiative to move to Vitória de Guimarães in the Liga NOS. Since moving, he has been able to shine and show his qualities, as this tactical analysis will outline.

Throughout this scout report, we will provide an analysis of the different situations Edwards finds himself in, and how he looks to deal with those situations, by looking at his offensive, defensive, and transitional capabilities and preferences.

Firstly, let’s look at some statistics which can highlight some of Edwards’ main strengths, and what he perhaps looks to do on a more frequent basis.

As we can see through the graphic above, Edwards is a very good dribbler. He ranks 10th in the league for both dribbles and successful dribbles, showing his ability to drive at defenders. This may suggest that he is a good player in both open and tight spaces and that he is not afraid to be a more direct player, which is true, as will be shown further on in this analysis. 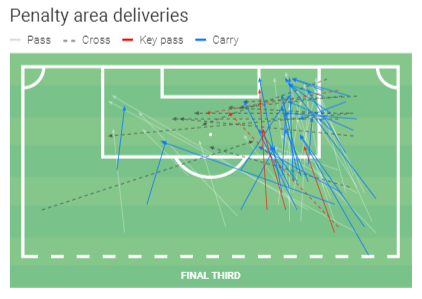 Another graphic which portrays Edwards’ style is his deliveries into the penalty area. Notice how deep on the right many of them come, with a few of them coming from near the by line. This suggests that his passes and crosses into the box from deeper positions are as a result of his role of having an overlapping full-back who delivers from those positions, whilst his role is more in front of the opposition’s defence.

The final area we will analyse data-wise is Edwards’ shooting. Despite being left-footed, having taken 25% of his shots on his right foot, he shows a high level of versatility on the ball. Additionally, we can see that Edwards likes to place the ball into the goal, which corresponds with his overall demeanour of being an elegant player, as opposed to someone who prefers to simply blast the ball into the net. 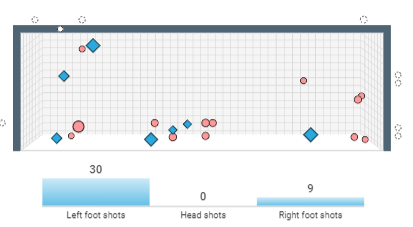 Most, if not all teams, will look to build out from the back, and often use different combinations of passes to look to break teams down. In this aspect, Edwards is good, as he is capable of producing quick one-twos with teammates which can help open up space, either to progress the ball or fashion an opportunity in the final third. However, as with almost every team again, this sometimes doesn’t work, with teams’ risks not paying off when building, and so having a player like Edwards is very useful. He is a very good progressive dribbler as we saw in our data analysis section. This, in part, can be put down to his lean and slender body shape, allowing for increased agility. Also, the fact that he benefited from world-class facilities at Tottenham helped him physically in his development. Below, we look at why he is such a good progressive dribbler on the pitch, and the role this plays for Vitoria in the build-up when they are starved of options.

In this situation, Edwards picks the ball up just before the halfway line. Sporting are yet to recover into their sitting shape, and so there is space to exploit. However, there are certainly many players between Edwards and the ball, with many more rushing back. Initially, Edwards does attack the space, before being confronted by the first defender, as shown below. 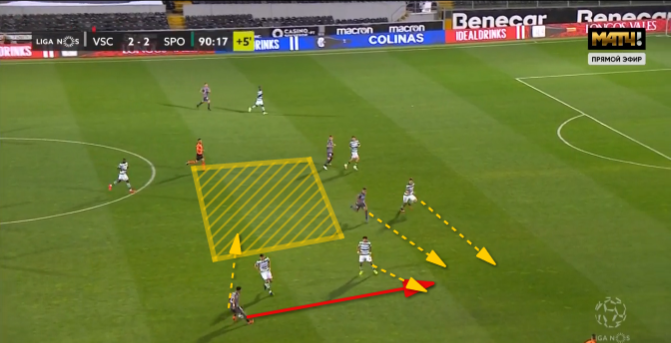 Now is where the progressive difficulties come into play. Edwards has two realistic options: he could play a ball down the line to his teammate, or he could attack the space inside. A pass down the line would have been very risk, because there are two Sporting players covering the strikers run. So, Edwards decides to perform a swift change of direction, and attack the space on the inside of the two defenders ahead of him. When he enters the inside space, however, he is again faced with another progressive dilemma.

As the Sporting defender tries to close the space entered by Edwards, yet another one opens up behind him. Again, Edwards could play a much more risky pass to one of the wingers, however by pivoting and further progressing the ball, he allows his teammates the opportunity to position themselves better for when the ball is finally released, as is shown below. 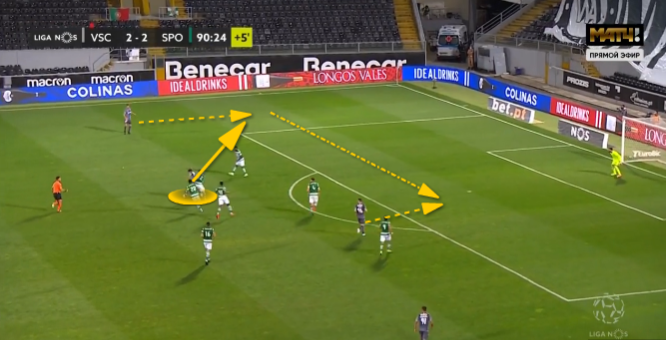 Now, one key aspect of dribbling which is often missed is being strong and being able to withstand a challenge. Above, not only has Edwards drawn three players to him and therefore opened up much more space for his teammates, but he is also able to hold off challenges from bigger players coming into him; an excellent show of balance and strength. From there, he can release the ball to the winger, who, as indicated by the arrows, can play a ball across the box for the Vitoria striker to finish – with all of this coming from the excellent progressive dribbling of Edwards. This provides just one example of where Edwards’ close control, low centre of gravity and excellent balance have all come into play to allow the Englishmen to be one of the stars at free scoring Liga NOS side Vitoria de Guimarães.

Apart from his offensive contribution, something worth noting is Edwards’ defensive work rate. Vitoria de Guimaraes, like others in the  Liga NOS, like to press higher and force the defence into mistakes. With Guimaraes playing a 4-3-3, the front 3, which includes Edwards, have a key responsibility in this press. Below, we investigate how Edwards’ presses and why he looks to press. 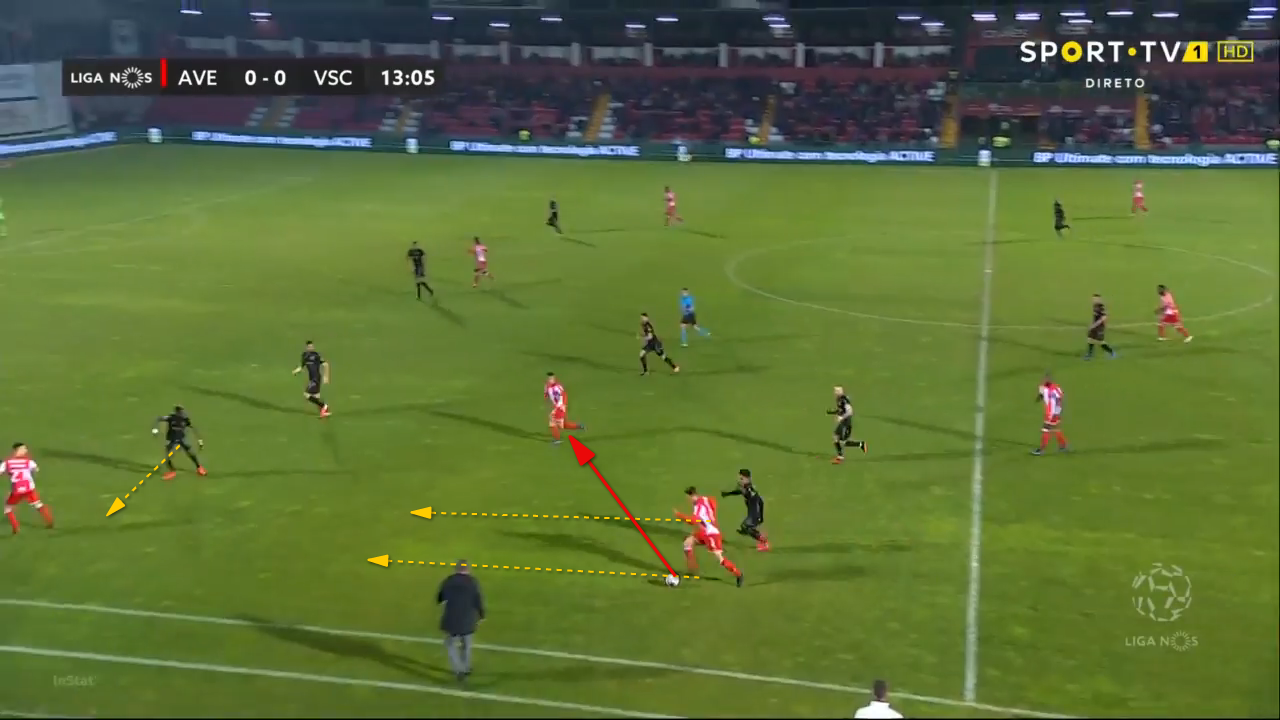 The in-game phase of play above shows Edwards tracking back to prevent his man from causing a threat. The key aspect worth noting here is that, although it is not high up in the pitch, Edwards is more than capable of just ushering his man where he wants him. By following him down the line, Edwards is able to prevent the infield pass from the Rio Ave full-back, who is then tackled by the Vitoria right-back. This shows not only that Edwards is willing to track back, but also that he is able to do so efficiently, which can also be applied further up the pitch as shown below.

Above Edwards finds himself looking to regain possession as soon as possible, with Porto looking to play out from the back. As one of his teammates steps ahead of him, Edwards smartly moves to prevent the lateral pass. After doing that, the Porto defenders are left with no choice but to play long or concede possession high up the pitch. The pass infield is still played, and so Edwards is able to pounce, and get his team back onto the front foot and attacking again.

What we have seen here is an example of how well Edwards can defend, whether that be through pressing intelligently high up on the pitch, or tracking backwards and doing the “dirty work” to allow his team to regain possession. It also highlights Edwards’ mentality, as he is willing to exhaust himself defensively for the betterment of his team.

As we spoke about earlier, Edwards is fast, and a great progressive dribbler, which makes him a great weapon on the counter-attack. When Vitoria regains possession, a common outlet is to go towards Edwards. Indeed, this is probably a key contributing factor to his high offensive duels figures. Although he is far from perfect, sometimes losing the ball and sometimes making bad decisions on the break, he has certainly developed, and the signs of a dangerous transitional threat are there, as we explore below.

The initial situation above is that Edwards intercepts the ball from the centre back, who looks to play centrally as opposed to going to his full-back. When Edwards controls the ball, he is able to start driving forwards. One of the key points in this situation is that Edwards decides to go centrally with the ball, as opposed to carrying the ball through the channel on the outside of the defender. The reason for this becomes evident below.

As Edwards drives centrally, we can see his supporting option: one man on each side and one centrally. This shows us why Edwards decided to go into the middle with the ball: to allow his teammate on the right to make a supporting run from which defenders and the space can be manipulated.

After continuously going forwards with the ball, Edwards evaluates his option. His striker is being ushered out of the phase, whilst any pass to the right would see his teammate having to do much more work to create an opportunity. Edwards plays the ball to the spare man on the right, who has space ahead of him. The defender on the left of him cannot close him as well, as he is marking the striker. This leads to Vitoria getting a goal, as they drive down the line and eventually take a free shot from a favourable angle.

The key to Edwards’ role in this transition is that his good decision making, which at times can be inconsistent, continually opens space and therefore opportunities for his teammates to get into threatening positions.

Throughout this scout report, we have looked at the tactics which have allowed Marcus Edwards to develop in Portugal. Along with this, we have analysed some of Edwards’ key strengths and traits which make him such a key player for Vitoria de Guimaraes, not just output wise, but in almost every phase of the game. Whilst many are touting Edwards for a move back to the Premier League or to one of the more prestigious leagues in the world, such as the Bundesliga, Guimaraes will certainly want to keep the bright young talent in Portugal, and hope that he can drag them into a European spot in the league. 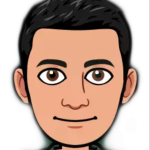