The fixture between the Dragões (FC Porto) and The Leões (Sporting) dates back to 1922, and tempers have heightened since their very first meeting, making for exciting matchups. Games have always been close between the top dogs in Portuguese football, as within this matchup Porto has scored 86 goals, three more than Sporting’s 83 goals. Meeting for the 241st time, the stakes could not have been higher as both teams battled for the coveted league title, with Porto sitting on 59 points beforehand, with Sporting as the hunting pack having accumulated 53 so far during the season.

While this old rivalry remains, a present-day conflict could brew between Porto manager Sérgio Conceição with his craft style and defensive solidity against Sporting manager Rúben Amorim, a fresh face in the managerial game, making others take notice. With everything to play for; the battle between the players, besides the battle within the dugouts.

This tactical analysis will look into Porto’s supremacy during the first half, while also discussing quickly taking the lead during the opening exchanges. Last, I will delve into how Sporting came away from the Estádio do Dragão with a point, despite having ten men on the field.

On the home side, Porto made use of a 4-3-3 formation, comprising Diogo Costa in goal. In defence, João Mário and Zaidu Sanusi were at full-back with ex-Premier League defender Chancel Mbemba and former Real Madrid defender Pepe at centre-back. In midfield, Otávio, Mateus Uribe, Vitinha and Fábio Vieira. In attack, was the striker partnership of Evanilson and Mehdi Taremi. 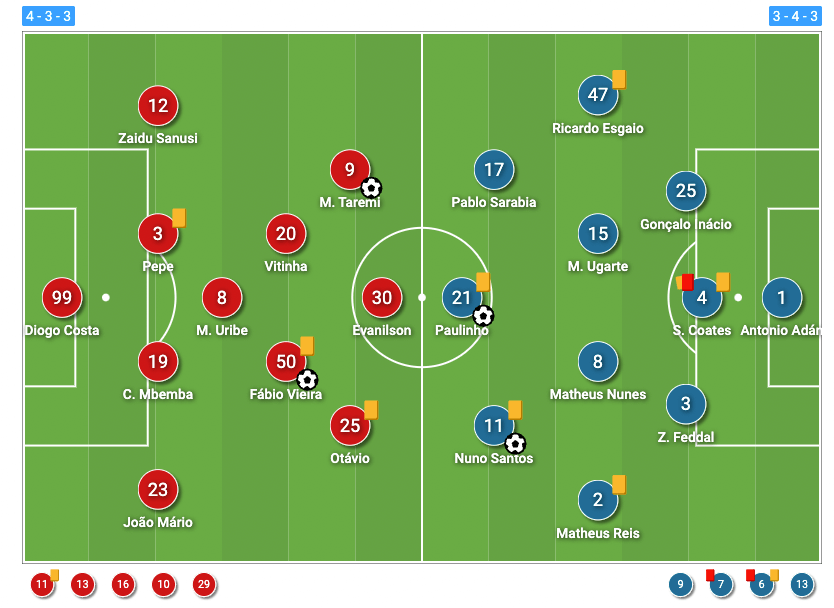 As this fiery fixture kicked off, Porto stamped their authority from the very first kick. Sticking to their 4-3-3 shape in possession, Porto coach Sérgio Conceição had a coherent plan to bypass Sporting medium block, starting from the first phase of play. While some teams may focus more on centrality regarding ball progression, Porto was more inclined to use the wide areas when working the ball forwards. During the build-up phase, Porto faced a Sporting side who did not press aggressively but attempted to deny central passages to Porto’s double pivot. To counter this defensive structure, Porto had a few solutions. Most commonly, one of the double-pivot comprising Vitinha or Mateus Uribe would drop slightly deeper, creating a 3v3 or 4v3. From this position, Porto worked the ball wide to the far-side full-back high and wide. 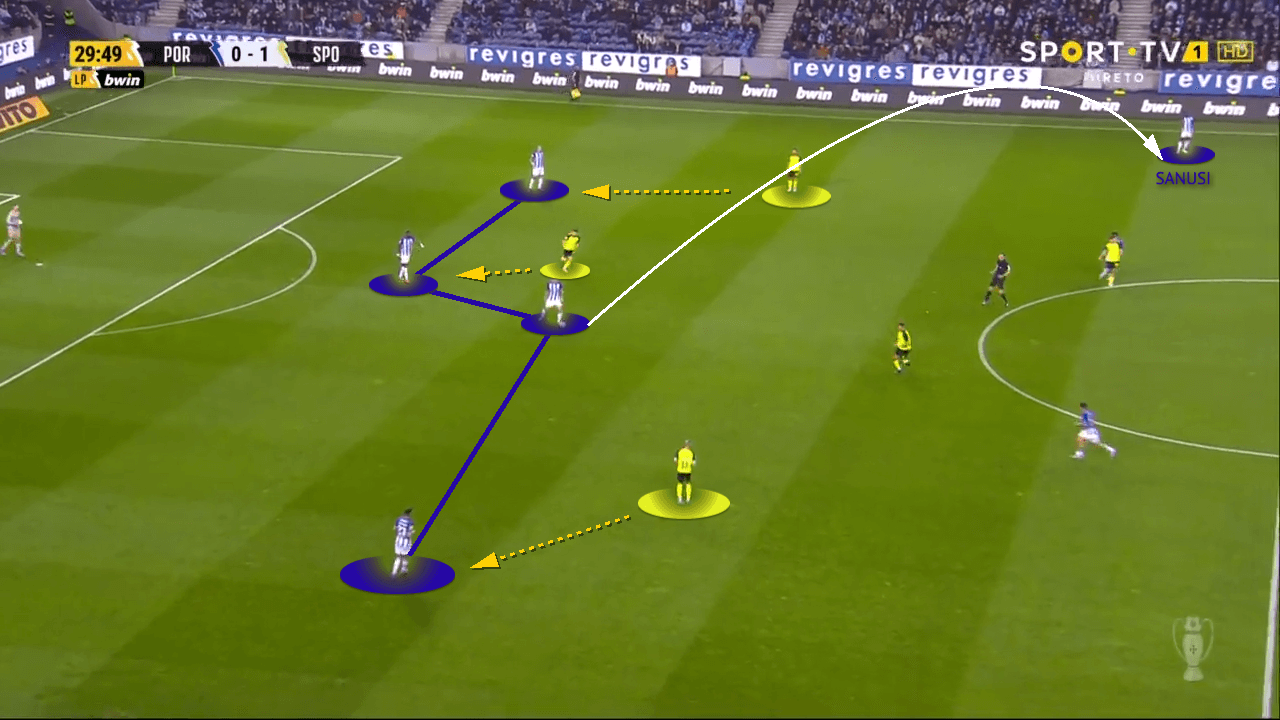 Within these areas, Porto backed themselves during 3v3 duels against their opposition, with their estates link-play and passing triangles. Here, Zaidu Sanusi, who has the ball, plays a pass down the line to striker Mehdi Taremi, who occupied a wide left position during this match. Sanusi plays a quick 1-2 with Taremi, quickly darting into the space just in front. During these passages where wide areas were utilised for ball progression, players such as Mehdi Taremi, who played a huge part as he became a link option, as well as creating space for teammates to exploit by occupying opposition defenders. 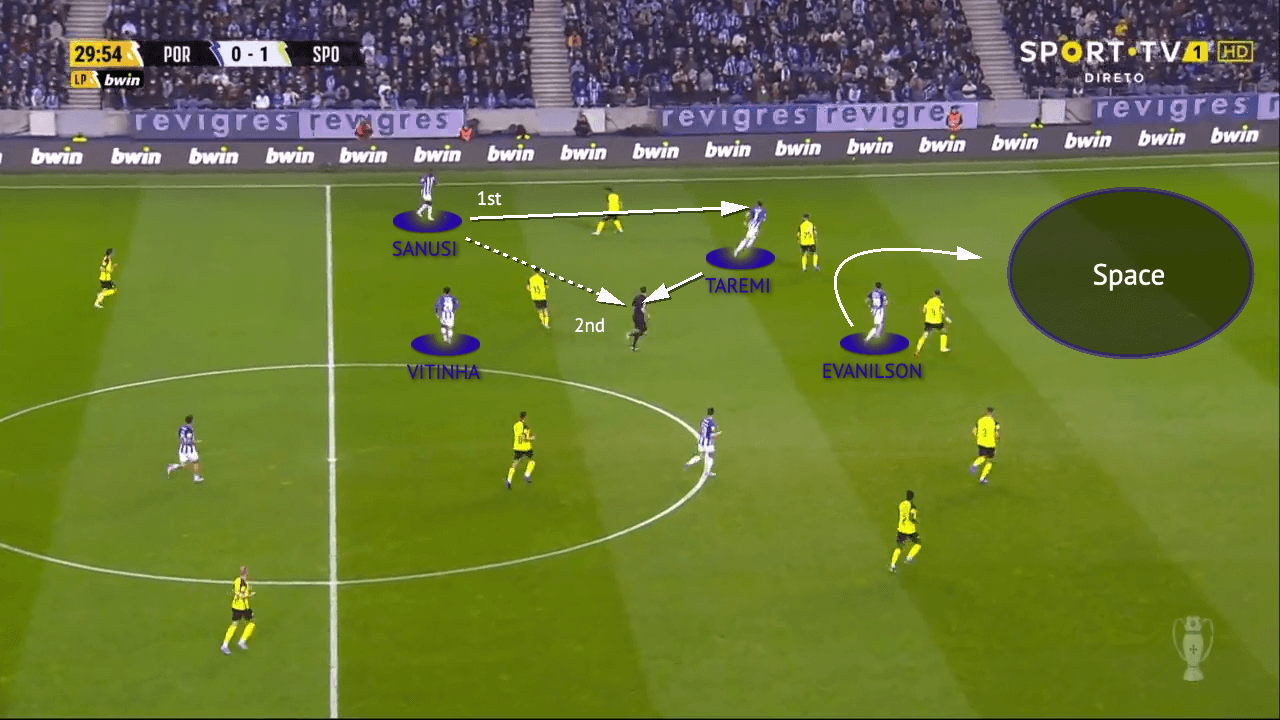 During the first half, Porto was the dominant outfit between the teams, as they could move the ball forward on more occasions, and limited Sporting access to the ball, due to them being so dangerous when they had possession of the ball. As in-possession, Porto was superior out of possession. The Dragões’ defensive tactics were quite clever; their 4-3-3 transitioned into a 4-1-4-1 formation, with the same intention as Sporting within a defensive regard ­­—block the central passages and play out wide. 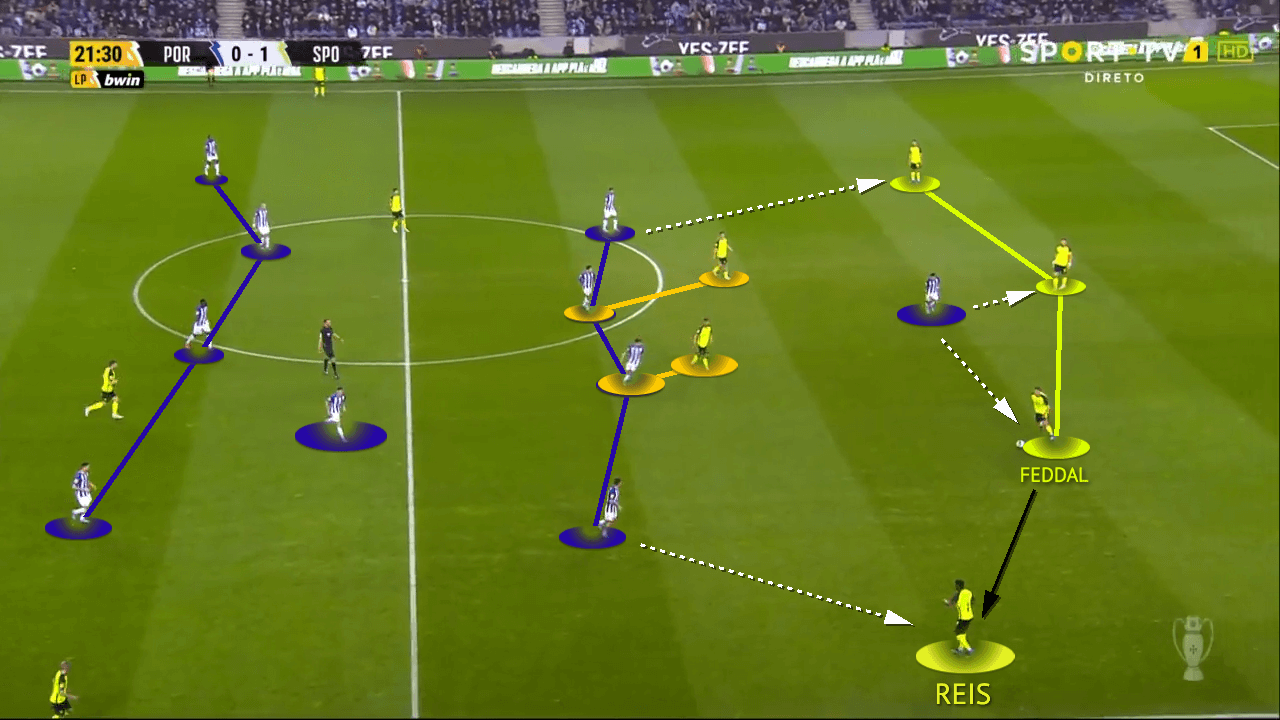 Zouhair Feddal plays the ball to Matheus Reis and as the ball travels to Reis, Otávio moves to Reis. Instead of running at Reis in a straight line, Otávio curves his run, block passes back into the centre while keeping the wide passing lane open for Reis. 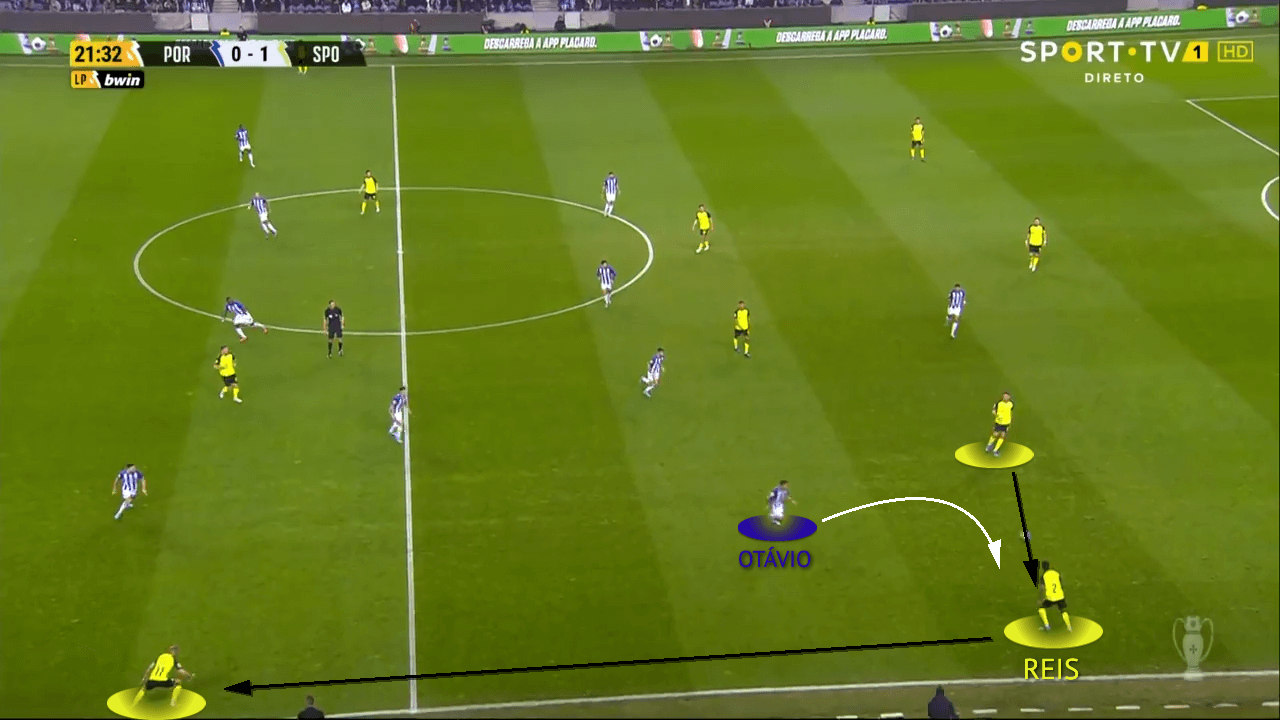 Now Nuno Santos is in possession, and as he takes his very first touch, Porto snaps into action, condensing the space around him and blocking all passes, with the ball eventually going out of play. This pressing trap and defensive organisation has used all game and stifled Sporting free-flowing game during the first 45 minutes. 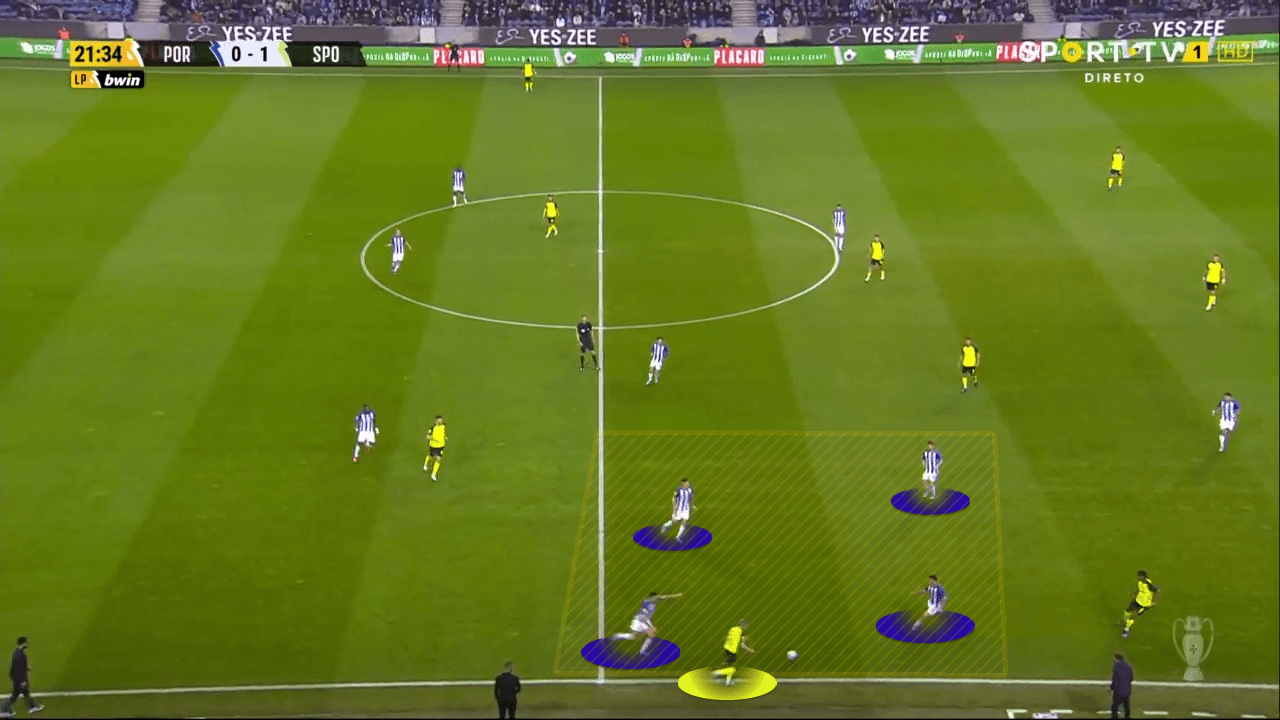 For all of Porto’s domination, link play and pressing traps, Sporting still converted from very little chance creation. Porto’s defensive tactics kept them pinned in, not allowing them to dictate and work the ball forward from the back. From goal kicks during the opening stages, Sebastián Coates and Gonçalo Inácio would be in the box, with Zouhair Feddal occupying a full-back position, allowing right wing-back Ricardo Esgaio to push forward. During these types of situations, Sporting struggled against Porto, constantly being forced wide or playing direct, both scenarios where Sporting lost the ball. To counteract this, Sebastián Coates stationed himself higher into the six spaces, just in front of their penalty area, allowing Sporting wide centre-halves in the box; creating a back three with the goalkeeper.

Sebastián Coates’ slight movement helped Sporting’s case in some regard, which can be seen through their second goal of the match. From the goalkeeper, the ball is played wide right to Gonçalo Inácio. 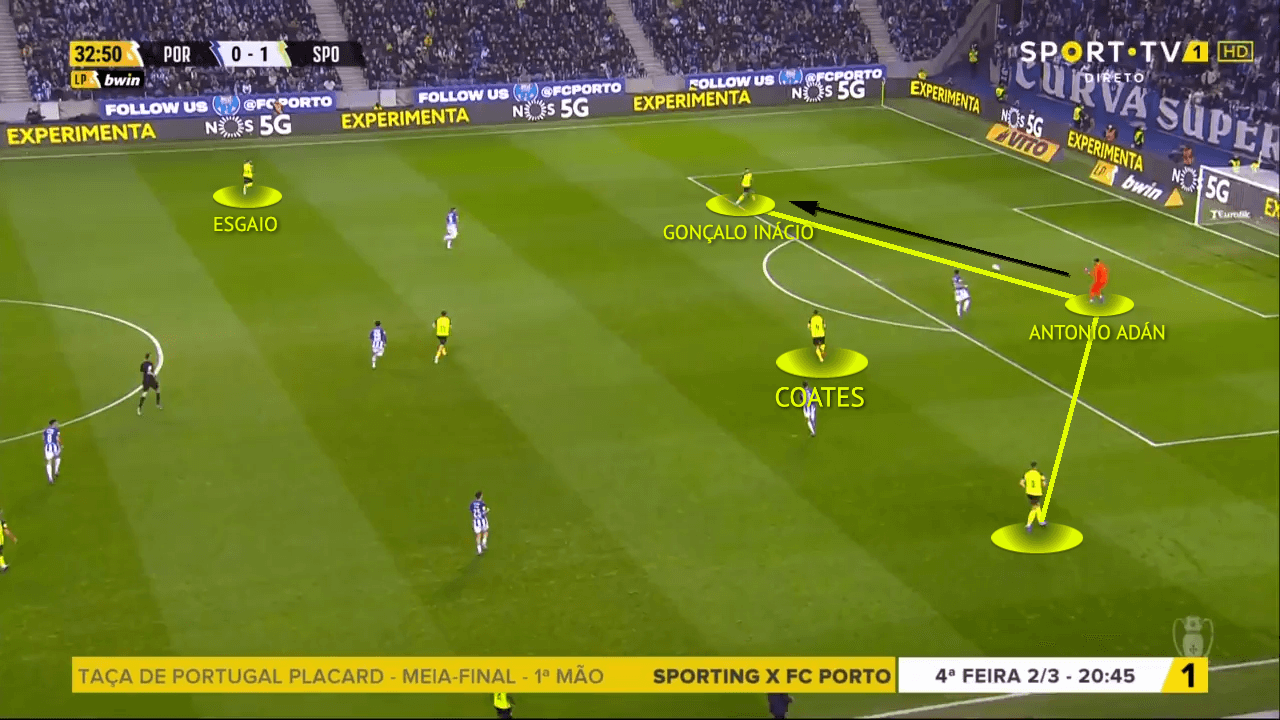 From Gonçalo Inácio, Ricardo Esgaio is now in possession. Sebastian Coates is alert to the situation and makes himself an available passing option from the number six position. 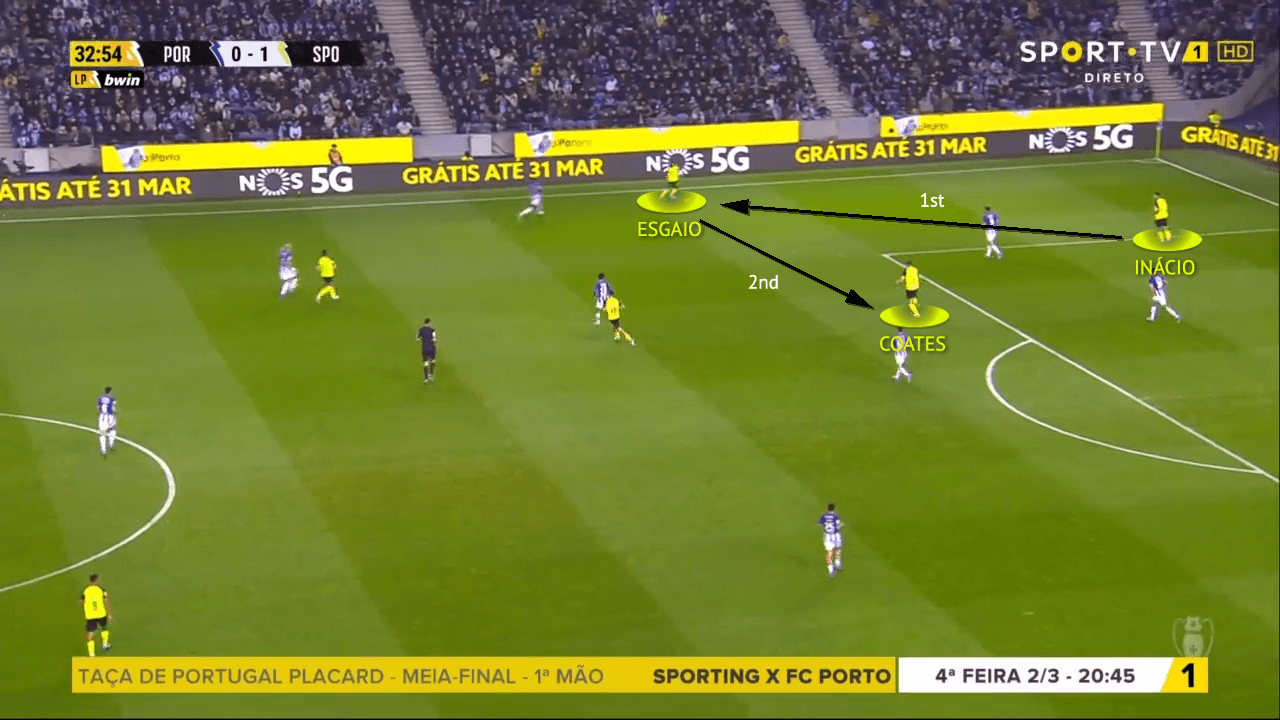 Now on the ball, Coates fires a perfectly weighted pass to Sporting striker Paulinho within the right half-space, and this passing lane is wide open because of Porto plays being pinned by Sporting. 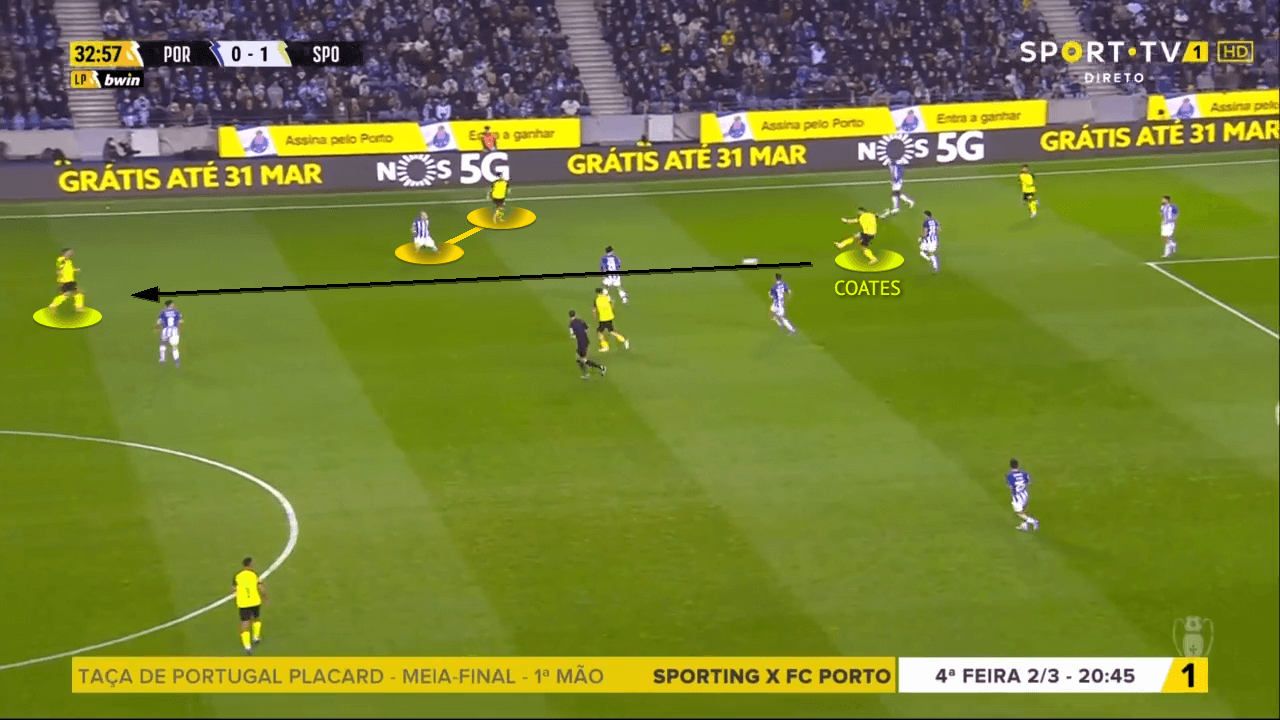 The ball gets played out wide, where Pablo Sarabia can switch the ball to the far side, where Matheus Nunes is in space. From that point, Sporting plays the ball down the line on the left side, creating a crossing opportunity and score. 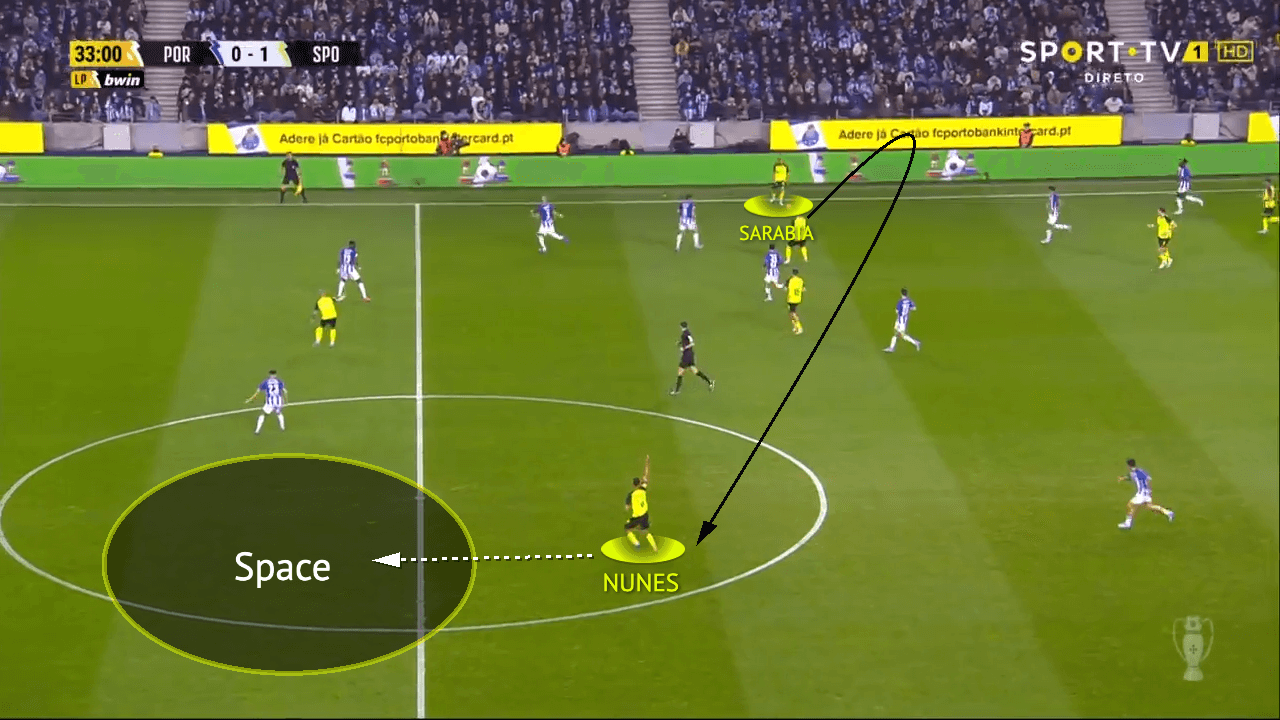 While Sporting held to their 2-1 leading, as the first half concluded, some events took a turn for the worse for The Leões during the first 5 minutes of the second half. Sebastian Coates received his second yellow card of the match and was sent off, leaving his team to defend their fragile lead for nearly an entire half.

Sporting’s 11-man 3-4-2-1 formation transformed into a 5-3-1 formation out of possession, but in possession transitioned into a 3-4-2 formation. Undoubtedly, Sporting’s attacking moves were limited, and the majority of hard work was utilised when Porto was on the ball. 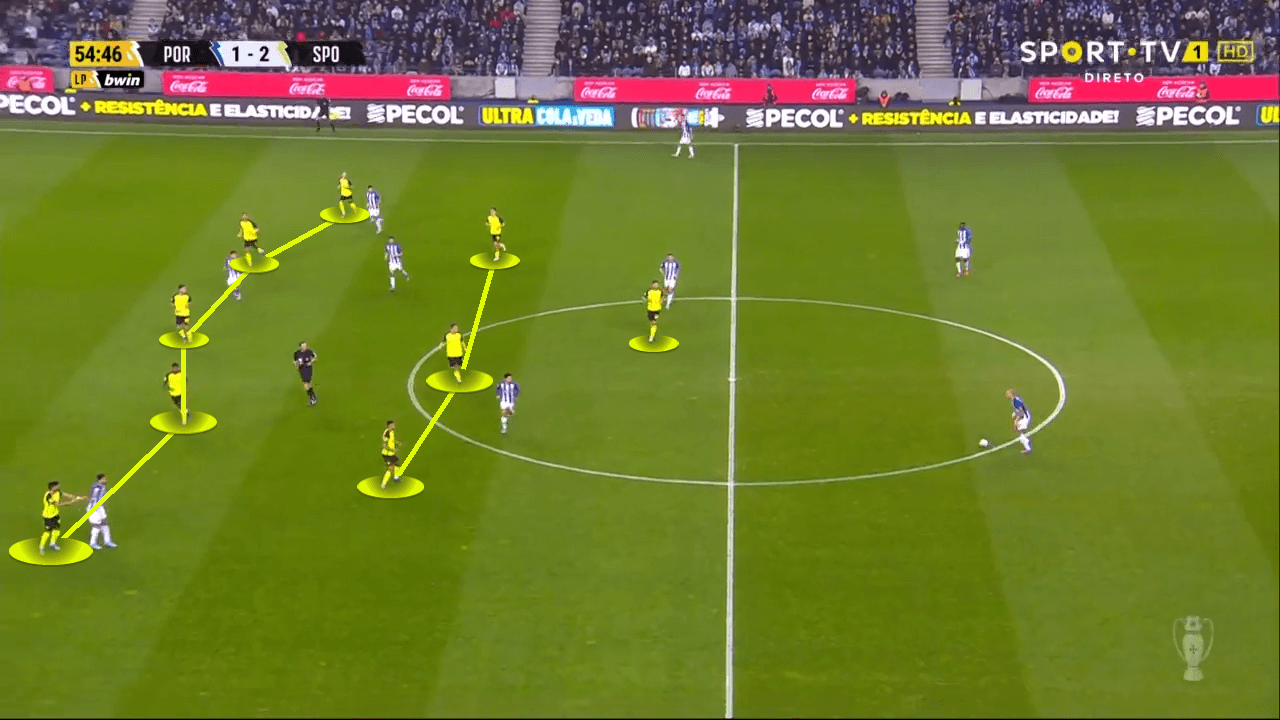 While in their 5-3-1 shape, Sporting denied Porto any joy down the centre by receiving in-between the lines by staying compact. The wide midfielders for Sporting were very important regarding their defensive organisation, and they helped keep a lid on Porto’s ability to penetrate, and were able to press the wide players when the ball eventually enters that zone.

Sporting excelled during these duals out wide; creating numerical superiority against the ball carrier and covering possible passes back to the centre. The back line was extremely impressive when marking free space, which could be exploited to create shot-creating chances. Here Porto has the ball out wide, currently facing a 2v1. A pass over to Mehdi Taremi is on, but a Sporting defender spots the opposition attacker and the space and edges closer to it, denying access even before the pass is made. 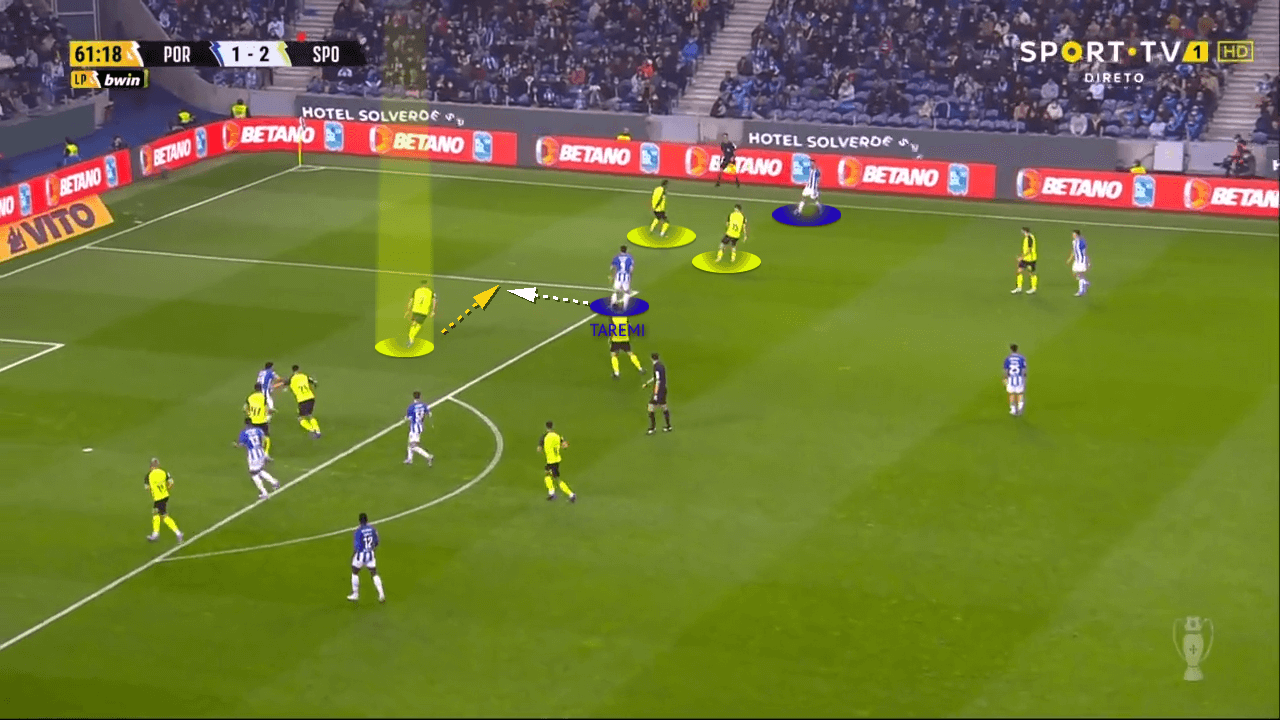 The rivalry between the two biggest cities in Portugal has occurred for a century and will continue for another, as both teams continue to battle for the top prizes. This season is no different as both teams coming into the match-up craved all three, for different reasons. Porto wanted breathing space between them and the rest of the pack, while Sporting wanted to keep their title hopes alive. This game did not disappoint, as both teams showcased key strengths needed to win league titles during different portions of this match. Porto’s first-half dominance was clear, and some could make an argument Sporting’s lead was undeserved. One quality that cannot be denied of Sporting was the resilience and defensive solidity that granted them a point at the Estádio do Dragão, even though they conceded. Most would have wanted this game to be the title decider, but with one point shared, this title race will continue, and may even go down to the wire.