Coppa Italia 2021/22: How Milan’s positional sense and “maturity” gave them the advantage against Lazio – tactical analysis

The Coppa Italia quarterfinals went more than well for Milan, who put four past Lazio to qualify to the next round, where they will meet their city rivals Inter, who they just defeated in a dramatic Serie A Derby della Madonnina.

Olivier Giroud was among the heroes in the game, scoring a brace in a second consecutive game, with Rafael Leão and Franck Kessié adding two more for the convincing 4-0 victory over Maurizio Sarri’s side.

While both teams had their moments, Rossoneri’s efficiency in front of the goal proved to be decisive, despite Lazio being the much more attacking team. Sarri’s men struggled to retain possession in the opposition half which led to very few chances in front of the goal. Milan were the more confident team when it comes to their actions in the advanced areas and their strong positioning led to quality chances and eventually goals.

Lazio’s inconsistent performance continues which not only threw their Coppa Italia chances away but also threatens their position in the league.

In this tactical analysis, we will examine both teams’ tactics and explain what made Milan the better team, despite Lazio’s efforts.

Stefano Pioli opted for his favoured 4-2-3-1 with Mike Maignan on the goal and a four-man defensive line of Theo Hernández, Alessio Romagnoli, Pierre Kalulu and Davide Calabria. Franck Kessié and Sandro Tonali were strolling around in midfield, with Brahim Díaz in front of them in the attacking midfield position and Rafael Leão and Junior Messias on the flanks. The former Arsenal striker Giroud led the attack.

Most of the changes Pioli made throughout the game were to fix some bits and pieces and bring balance. The team were attacking mainly through the left as per usual, while Calabria, Tonali and Junior Messias couldn’t be as threatening on the right. That led to a few chances in the second half, as Ismaël Bennacer replaced Tonali and Alexis Saelemaekers and Fikayo Tomori replaced Junior Messias and Calabria respectively. The right-back was rather inconsistent defensively as a few lost balls on the edge of Milan’s defensive third could’ve cost them some trouble if it wasn’t for their defensive organisation as a unit.

Sarri opted for his 4-3-3 at first but then switched to more of a 4-1-4-1 after a triple change at the beginning of the second half. He started with Pepe Reina on the goal and Adam Marušić, Patric, Luiz Felipe and Elseid Hysaj in defence. Toma Bašić, Danilo Cataldi and Sergej Milinković-Savić started in midfield, while Mattia Zaccagni and Felipe Anderson flanged Ciro Immobile.

The manager’s changes were a desperate call for more offensive creativity and efficiency. He subbed Cataldi, Anderson and Bašić at ones for Lucas Leiva, Pedro and Luis Alberto who were supposed to bring more intensity in attack. It definitely increased their confidence and ball control. Lazio’s pass accuracy increased from 87.39% in the first half to 91.61% in the second half, although this has also to do with Milan consciously giving away the initiative after their third goal.

A thing that has improved in Milan’s performance is their understanding of the game, which leads to increased confidence and better results. Their successful actions as a unit both defensively and in attack is a result of a few different factors.

Pioli started relying on the successful partnerships in certain areas and on carefully considering his starting XI in a way to expose the oppositions’ weaknesses. And most importantly, he is now better at making the right in-game changes, which immediately leads to the team’s better adjustment to different circumstances.

After Sarri’s changes, Milan looked aware that their opponents would pressurize them, and focused on defending, giving away the initiative and decreasing their press. Apart from a couple of individual mistakes, Rossoneri’s defensive positioning was executed very well.

Their reading of the game and measured movement allowed them to re-group quickly in dangerous situations and keep Lazio away from the goal. The Biancocelesti’s low number of shots on target is a result of Milan’s strong positioning and marking. Whenever the opposition were advancing with the ball, they were looking to follow them closely, but what made their actions successful is the way they managed to reorganise even in situations when the ball carrier managed to escape his marker. 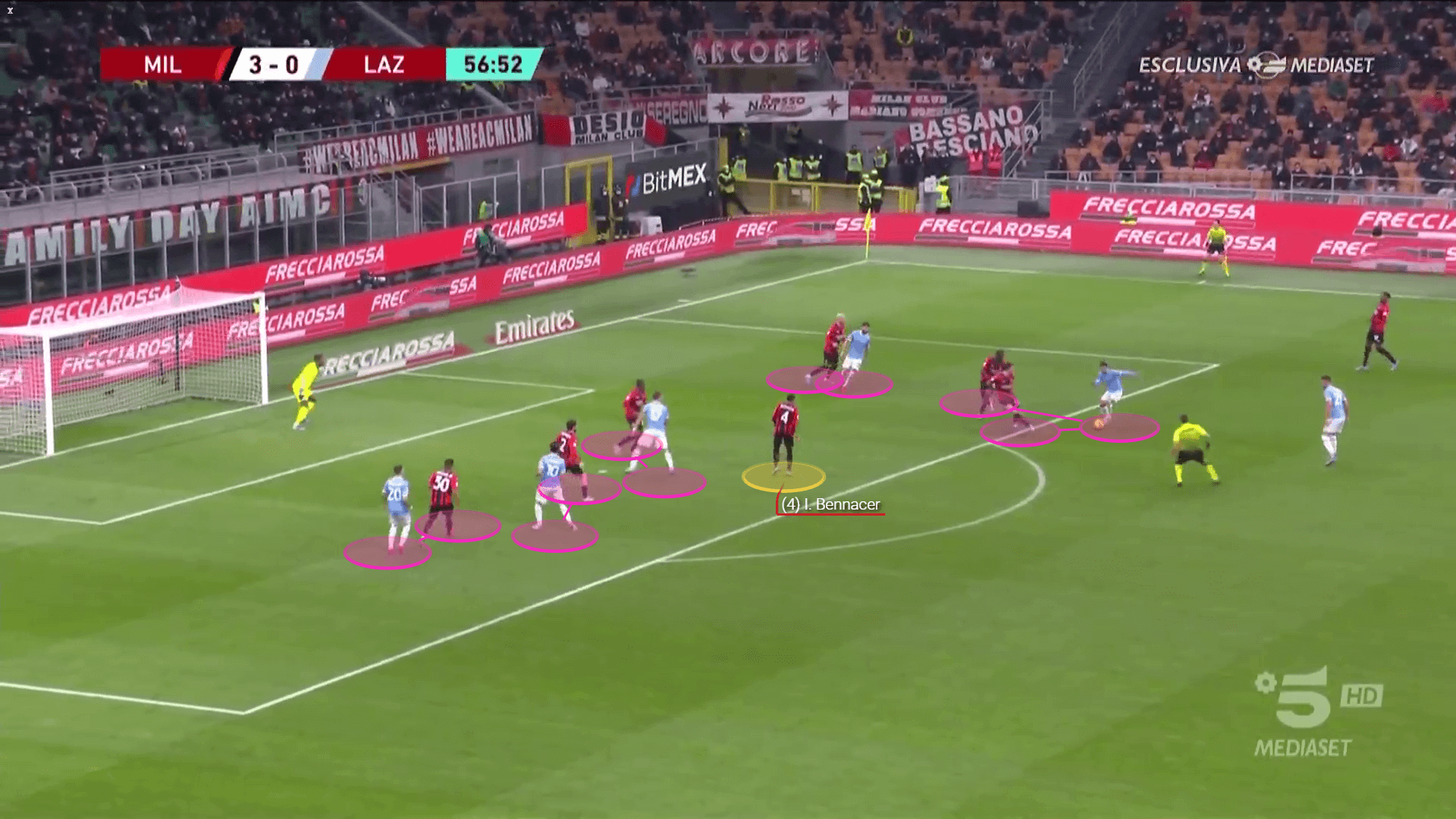 Even when Lazio’s players tried to move off the ball and pressurise Milan, the Rossoneri managed to regroup and the players didn’t let go of their targets, executing their marking strategy perfectly.Their judgement and reading of the game was the main reason for their efficiency in attack too. The partnership between Hernández, Kessié and Leão is fruitful on the left, exactly because of their ability to exploit spaces and catch the opposition off-guard. They successfully engage players with their movement and know how to exploit the created spaces smartly. 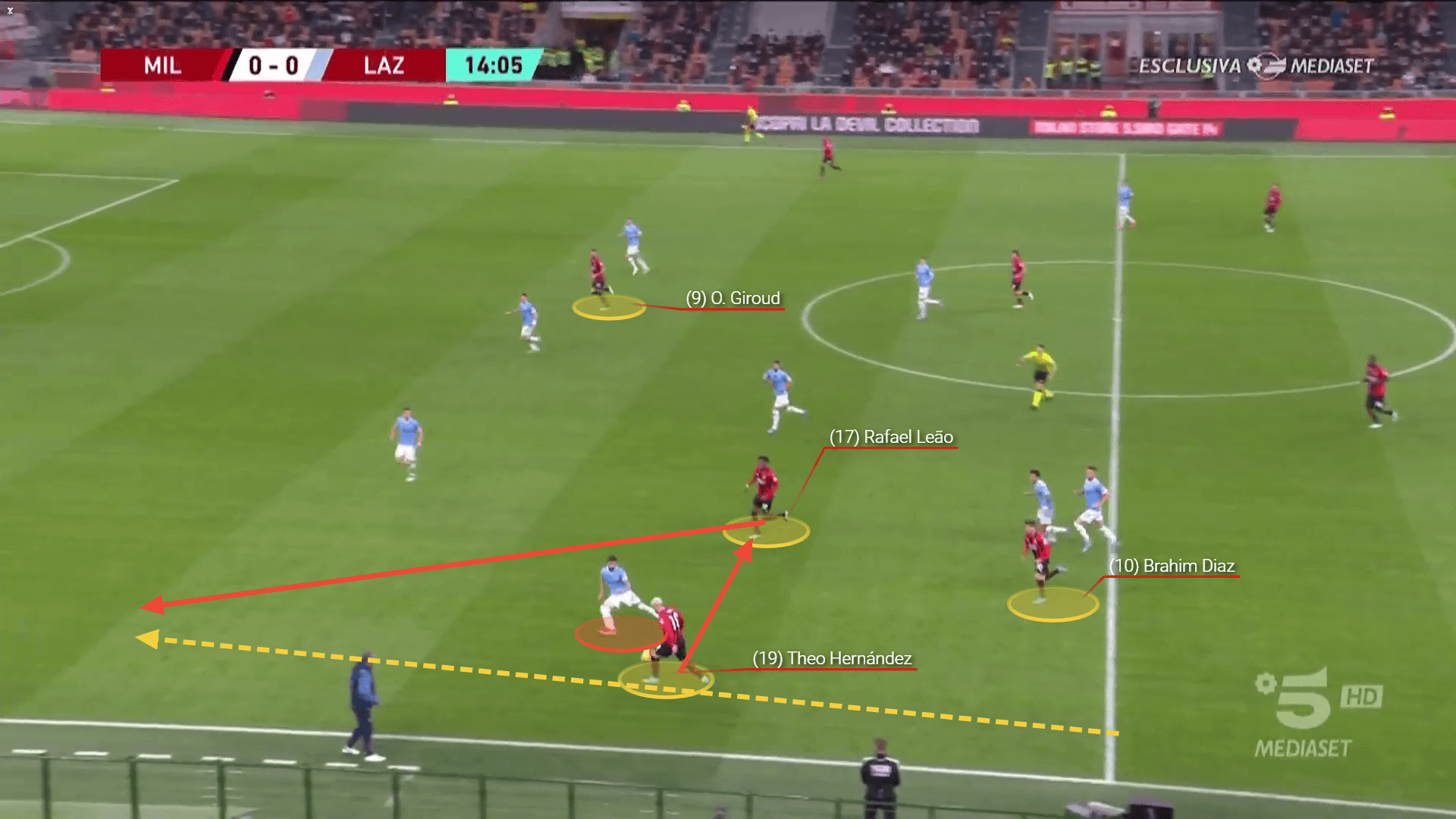 Hernández received the ball but sent it back to Leao to escape the press and immediately moved off the ball to receive it again and expose the opposition.Leão’s dribbling abilities and runs off the ball, combined with Olivier Giroud’s outstanding positional sense, have proven to be very successful in front of the goal. Hernández attacking flair and movement between the flank and the box increases their explosiveness even more as he not only often provides a direct threat, but his judgement allows him to frequently set his teammates up in goalscoring positions too.

Lazio have been struggling to balance out their performance this season and throwing everything in attack affects their defensive record. Sarri’s side weren’t efficient in their defensive duels against Milan, winning only 47.46% of them, and although, not many of their lost challenges were in the box, they were still giving away possession in dangerous areas, giving Milan the chance to take advantage of that.

This is not an isolated case for Lazio. Their Serie A number also underline their defensive fragilities. The team have the worst record in the league when it comes to successful defensive duels (55.8%).

The lack of press and a successful marking strategy was the reason for conceding quite a few attacks against Milan and for conceding four goals. They struggle in defending as a unit and often overcommit to certain areas, providing a lot of space for the opposing players to exploit off the ball. Milan took advantage of that and the attackers constantly moved into quality positions to threaten the goal.

Their focus on the ball carrier often makes it difficult to re-group which is crucial against teams that rely on link-up-play and one-touch combinations in attack, since their reactions are slow. Instead of man-marking they usually try to drop as a unit and the lack of effort to intercept the ball often sees them in a difficult position in their own half.

Their overcommitment to attack also exposes them against teams that tend to counter-attack often. Milan also took advantage of that and tried to expose Lazio on a counter three times.

As Stefano Pioli said in the post-match interview, Milan are constantly improving both technically and tactically and they have “demonstrated their maturity” in the win over Lazio. The connection the players have developed and their awareness and understanding of the game have made them successful both in attack and defence. As our analysis shows, Lazio have a lot to worry about defensively, and if they do not start improving in that direction, their efforts in attack would be thrown to waste.