Jeremie Boga scout report: What Atalanta fans can expect from the Ivorian winger

Тhe changes in Atalanta’s squad continue and they will need to adjust once more after losing another one of their best performers Robin Gosens to their Nerazzurri rivals Inter. Despite being injured for the most part of the 2021/22 season the left wing-back moved to Inter on loan, with them hoping to find a solution to Ivan Perišić’s expiring contract and add one more option on the left.

Atalanta didn’t risk sending him away without securing a replacement and acted upon signing Jérémie Boga from Sassuolo to fill the gap on the left. Boga is a 25-year-old left midfielder who gets deployed in an attacking role due to his dribbling abilities and link-up-play. He was mainly deployed as a left-winger at his previous club but there is a possibility to drop deeper into a midfield position at Atalanta.

Gian Piero Gasperini has to find a way to bring the team back on track after a difficult last month, missing a few of his regular starters due to injuries and positive COVID-19 tests. The former Chelsea academy player comes in the right moment to help them in ball progression and increase their explosiveness in attack. His arrival might require a few little changes in tactics in order to use him to his potential as his playing style differs from Gosens’.

In this scout report, we use tactical analysis to explain how Boga could enhance Atalanta’s performance and how his strengths could fit their tactics.

Why did La Dea need a player on the left?

After Gosens’ injury, Gasperini has been forced to rely on the loanee Giuseppe Pezzella as a left wing-back who can help the team both defensively and in attack. He does have the needed qualities for that position but was never able to replace the German who provided explosive runs to the box and was immensely reliable defensively too.

Without him on the left and Hans Hateboer on the right (both injured), Atalanta had to change their playing style and while they continued to use the wide areas to progress the ball and expose the opposition they weren’t as efficient compared to the previous couple of seasons. Not only they didn’t have their regular starters on the flanks but also had lower coverage in the advanced positions on the left after Alejandro Gómez’s departure. That led to decreasing their crossing frequency from the left and respectively to decreasing their chances on the goal.

While Pezzella fits the tactics he is the type of player to provide more crossing attempts rather than to move into the half-spaces and the box frequently. Gosens and now Boga are more prone to cutting inside and providing additional threat, dragging players out of position and supporting their teammates.  Atalanta lack options on the left which affects their versatility and is limiting their chances upfront.

The team also currently have difficulties in attack due to the absence of a few players and which led to Luis Muriel taking much of the responsibility upfront. Now that he is also out with a positive COVID-19 test and Aleksey Miranchuk getting injured, they are short of players. Having someone in attack, especially on the left where they can be more dangerous from, is crucial.

What can Boga bring in possession?

Boga was most frequently used as a left attacking midfielder and as a left-winger at Sassuolo. He is highly valued due to his ball progression abilities and his reading of the game. The 25-year-old’s composure and his ball control make him suitable for building up through the left flank and bypassing the press through dribbling and link-up-play.

Boga has averaged 5.8 progressive runs per 90 for Sassuolo this season, which is the second-highest frequency in the league. That quality could be key for Atalanta, who focus on exposing the opposition through the flanks and need a player to take on defenders and deliver the ball to the final third.

His control combined with his dribbling abilities would help the team in the final phases and while he might not be contributing with many crossing attempts, he would often cut inside and provide options in the half-spaces, which would increase Atalanta’s efficiency in attack. He averages 9.83 dribbling attempts per 90 which underline his focus on holding on to the ball and advancing it. It helps him to retain possession which results in a rather low number of losses per game compared to other players in his position. Milan’s Rafael Leão, who is the only player with higher numbers in dribbling and progressive runs, loses the ball 10.99 times per 90 compared to Boga’s 7.69 losses on average.

One of the reasons for the low number of crossing attempts (1.89) compared to the average for his position is his right-footedness.

His judgement and reading of the game also make his positioning very beneficial as he helps the team to deliver the ball to the advanced areas through link-up-play – something that is highly valued by Gasperini, although they have lost efficiency in the last couple of seasons.  Boga constantly cuts inside and likes to do lay-offs. His pass completion rate is considerably high for his position (82.5%) and combined with his positional sense it can be very beneficial for the team in attack as he could set his teammates up in good positions. 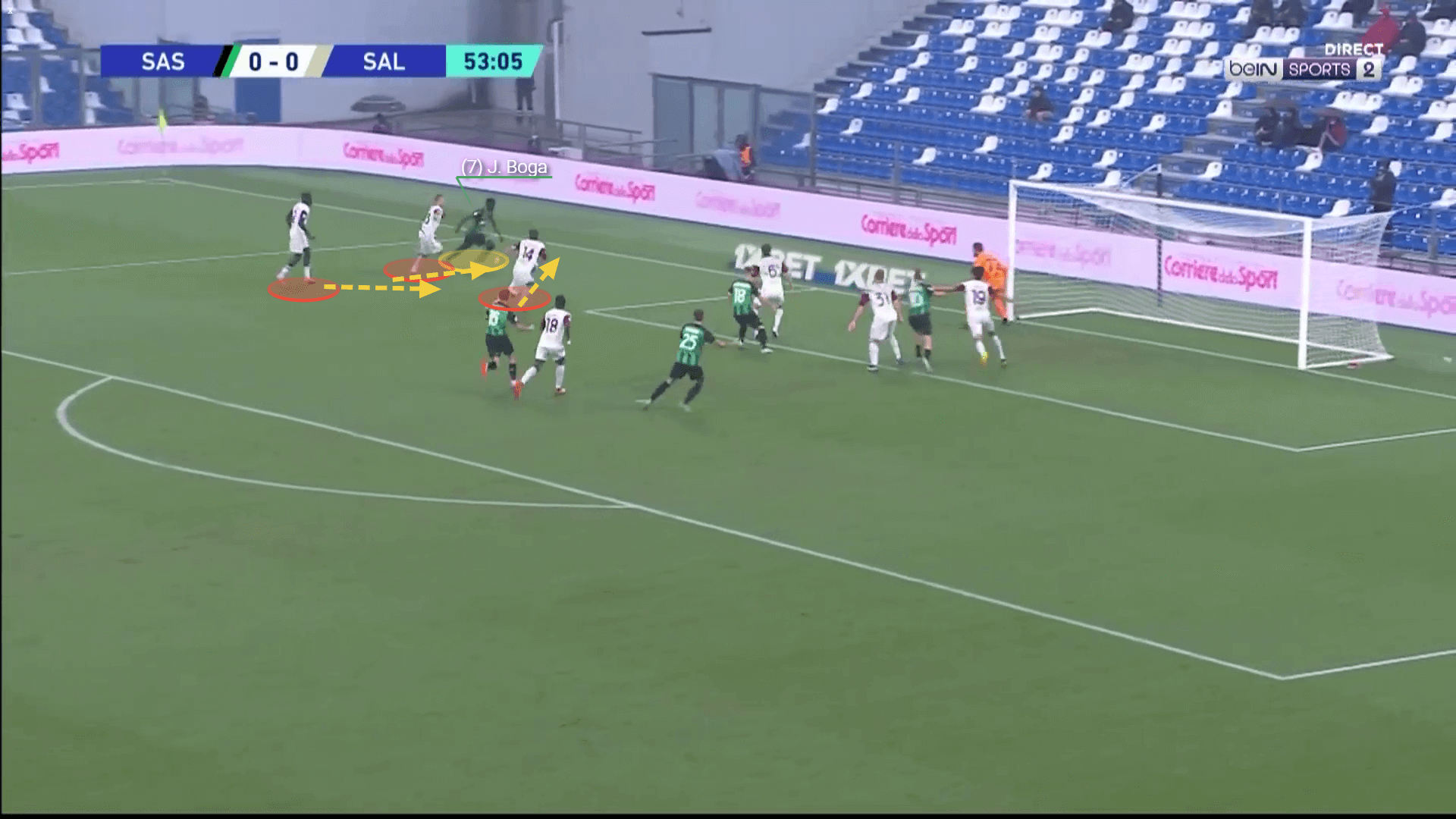 He takes on his markers through dribbling and reached the goal area successfully threatening the goal.He often moves into good positions himself and has the opportunity to shoot. With his 1.76 shots per 90 he provides additional threat from outside the box but mostly threatens the opponents from the half-spaces which he most frequently occupies and with his 3.78 touches in the box he often challenges defenders and increases the team’s chances to score.

Can he offer anything defensively?

Being realistic, Boga’s biggest defensive contribution is his ability to hold on to the ball and take on players. That allows him to retain possession and keep the ball away from the opposing players. When it comes to actual defensive actions, the Ivorian doesn’t have the needed impact on the game.  He would support the team by recovering the ball, although this happens in and out depending on the opposition and the opportunities that arise. Under Gasperini, he might be required to be more active in that matter as he would have to fit their smart marking strategy and be constantly ready to challenge his opponents and gain back possession. He might help them decrease the number of losses, though, as the team have the worst record in the league in that indicator. 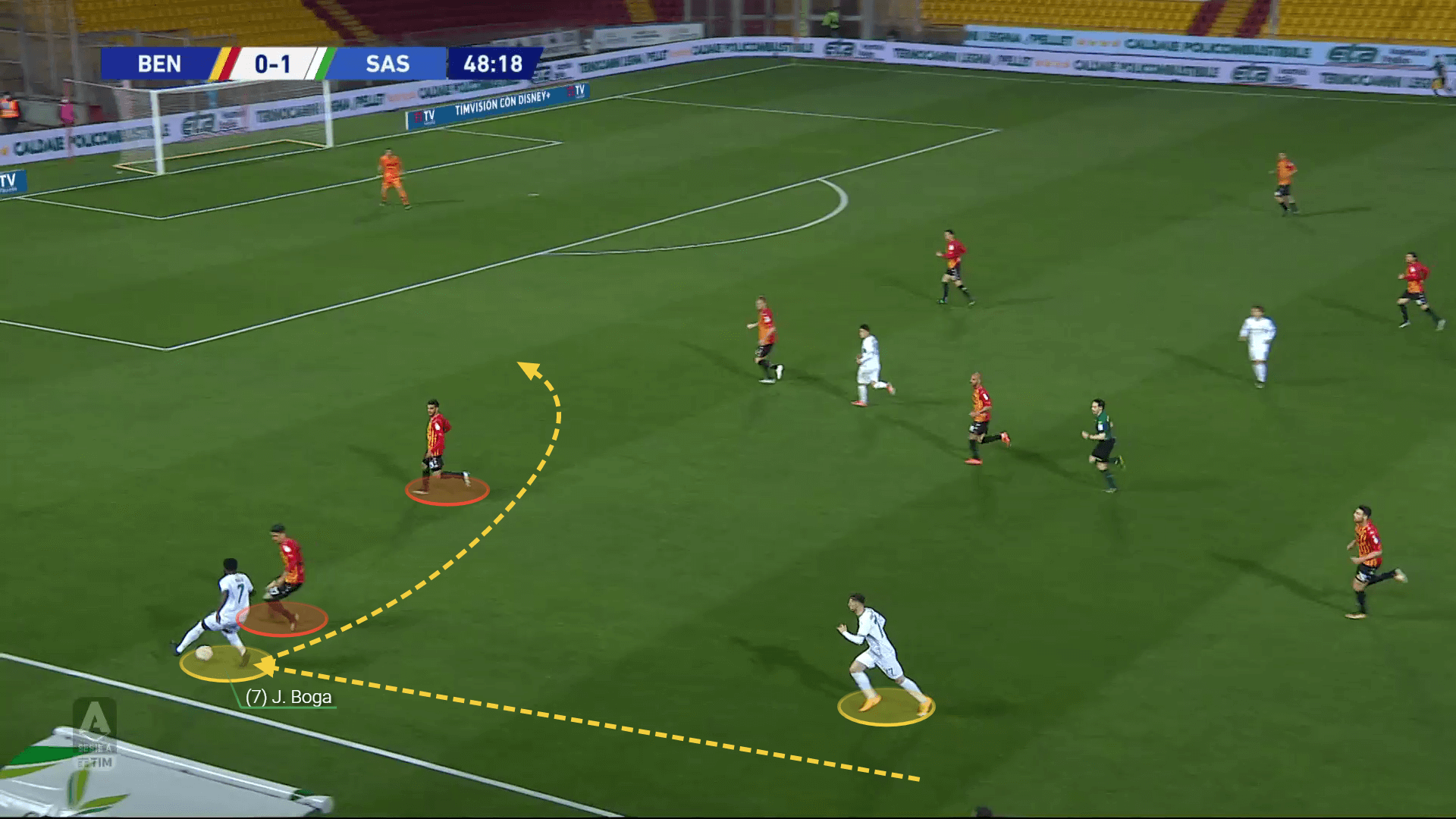 He then received the ball and despite the pressure, he demonstrated his control and retained possession by luring his marker and cutting inside.The 25-year-old was involved in very few defensive duels per game for Sassuolo and he rarely contributes in the air. That’s might be a drawback in his life in Bergamo as their aerial presence is very important for La Dea’s defensive success. Only five players of the whole squad have an average number of aerial duels lower than two per game. Atalanta are the most successful Serie A team in the air with a 53.2% success rate. For comparison, Boga averages only 0.88 aerial duels per 90.

As our analysis showed, Boga can bring some of the explosiveness in possession back. With the Ivorian, the team will have a better chance to use link-up-play to progress the ball and threaten the opposition. His dribbling abilities and control will be beneficial in advancing the ball and can help the team in distracting defenders and supplying the attackers with more balls.