The sacking of Nuno Espirito Santo saw the arrival of Antonio Conte join Spurs, hoping to rejuvenate the North London side. With Antonio Conte’s entry, comes his customary back-three system, with this being said, the cat was still out of the bag regarding which specific formation the Italian coach would make use of.

Conte’s Inter utilised a 3-5-2, while during his previous spell in the Premier League with Chelsea, Conte employed a 3-4-3 formation. The newly appointed coach decided to make use of the latter, as the likes of Harry Kane, Heung-Min Son and Lucas Moura as a front three deemed a strong fit. Life in (North) London started well, winning his first match in the Europa Conference League, along with, three wins and a draw within his first five matches.

As weeks passed, and the honeymoon period was certainly over, Spurs’ top form dwindled, losing to Chelsea at Stamford Bridge, and at home to both Southampton and Wolves back-to-back. One common denominator regarding those two home defeats was Spurs’ right-hand side, which showcased a major weakness.

In comes Dejan Kulusevski, a 21-year-old Swedish international, formerly of Juventus and Parma. The Swede failed to impress during his time in Turin, but he swapped Italy for England’s capital, the young forward has not looked back, adding a new dimension to Spurs. Within Kulusevski’s first 12 games, he has accumulated nine-goal contributions and has gelled well with Kane and Son.

This tactical analysis and scout report will discuss the advantages and disadvantages of Lucas Moura, and why the addition of Dejan Kulusevski has been a catalyst for the spurs. In addition, I will also be delving into both Liverpool’s and Spurs’ front three, looking at whether they share some similarities.

The pros and cons of Moura

When evaluating Lucas Moura’s game, the first point that must be echoed is his dribbling and technical talent. It is not surprising to see a player who obtains such skill be playing a such a high level. Additionally, Moura works hard; he gives his all for the team and adds vigour and work rate to his side. 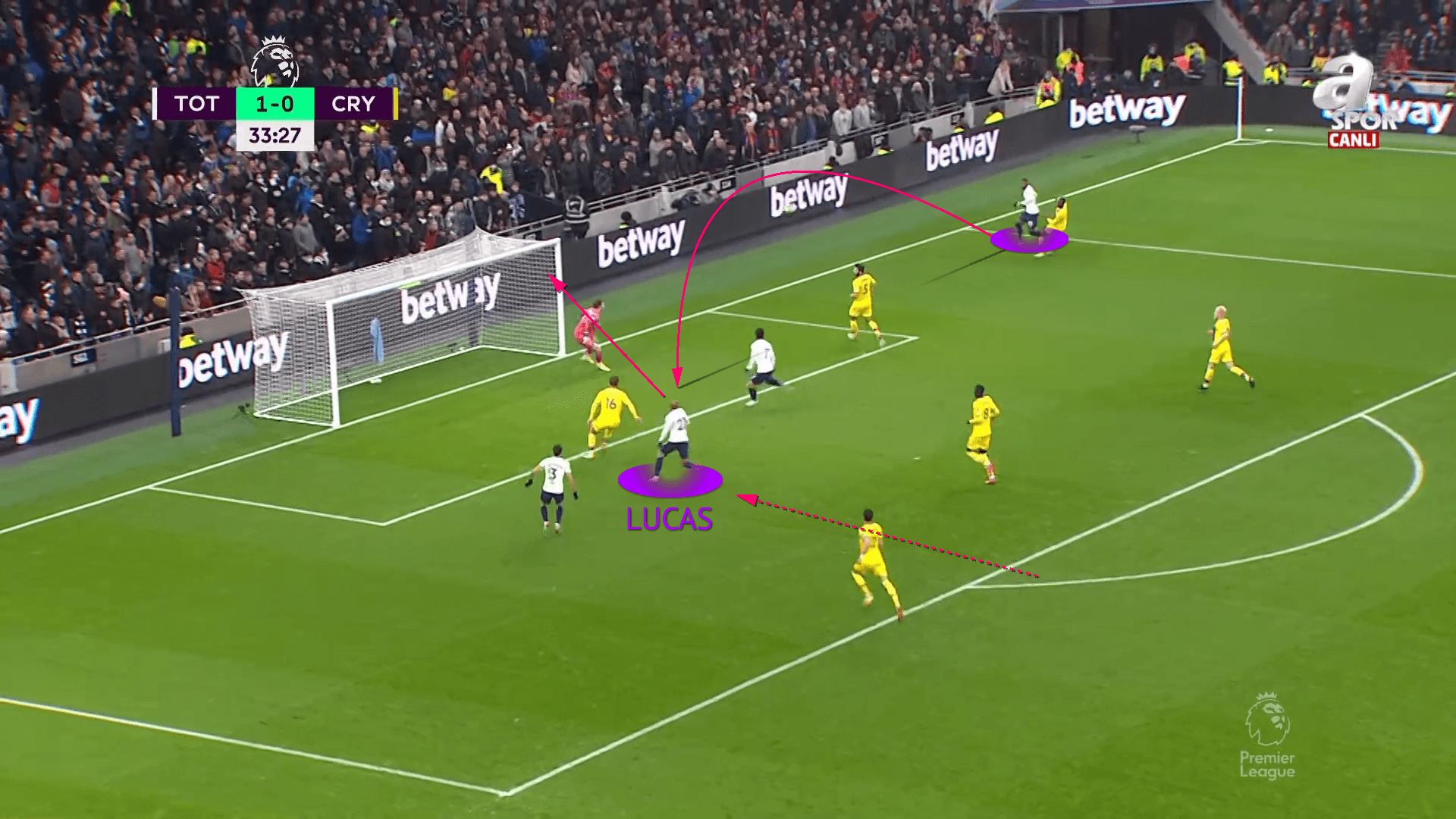 Having a player that has such much ability in his feet, while putting in a shift, is the type of combination a manager will welcome with open arms. The issue that Lucas Moura presents is his lack of security on the ball which has a major significance on the quality of attacks a team can produce.

As mentioned, precious, Moura is a technically proficient footballer—but only in a select category. His first touch is incredibly heavy, which does not allow spurs to sustain attacks within the final third of the pitch at times. In addition, his poor quality first touch can also be quite noticeable during counter-attacking situations.

While not being secure on the ball, Moura does struggle to be productive, when he does have a clear grasp of it. Standard stats would agree with this notion, having not scored more than 4 goals in the last three seasons. In a creative sense, five assists are his highest tally, dating back to the 2014/15 season in his days in Paris. This is with 1.59 key passes per game, which is quite average, as well as a 0.18 non-penalty expected goal per game.

The most noticeable issue that Moura faces within Antonio Conte’s Spurs is his lack of identity within the front three. The roles of both Heung-Min Son and Harry Kane are distinguished; Kane will drop slightly deeper into space, looking for Son to run in behind. Lucas Moura is not a true goal scorer here and his stats showcase this. Moura does not have the needed creative capability, which would allow Harry Kane not need to drop so deep consistently. Overall, for all of Lucas’ hard work and moments of magic, consistency and production are lacking.

Before making his January transfer move from Juventus to Tottenham, Kulusevski was not in the best vein of form. Due to the excess of managers in and out of the door at Juventus, Kulusevski was constantly placed into different positions. The latest of many managers at Juventus Maximiliano Allegri did not favour the Swede and left him as an option on the bench. Spurs director of football Fabio Paratici decided to go back to his old club and take advantage of the situation at hand. Most Spurs fans were optimistic regarding the impact Kuluseviski could have on this Spurs team, but most would not have thought he would hit the ground running as well as he has done so far into the season.

Dejan Kulusevski is a right-winger by trade but can play in a plethora of positions such as a number ten, or a striker. As he is left-footed, from the right-hand side he likes to cut inside. His being left-footed is quite important, as this is one of the main reasons he combines so well with Son and Kane. Kulusevski adds something to the attacking line-up Spurs have not been afforded since the days of Christian Eriksen; cuteness in and around the penalty area. Lucas Moura was quite wasteful in the final third and this criticism cannot be placed upon Kulusevski. The 21-year-old right-winger is a creative player, preferring to pass rather than take a shot at a goal for himself. Having that left-footer in a team that can play at different angles and create different issues can add quite an amount of variance to an attack. 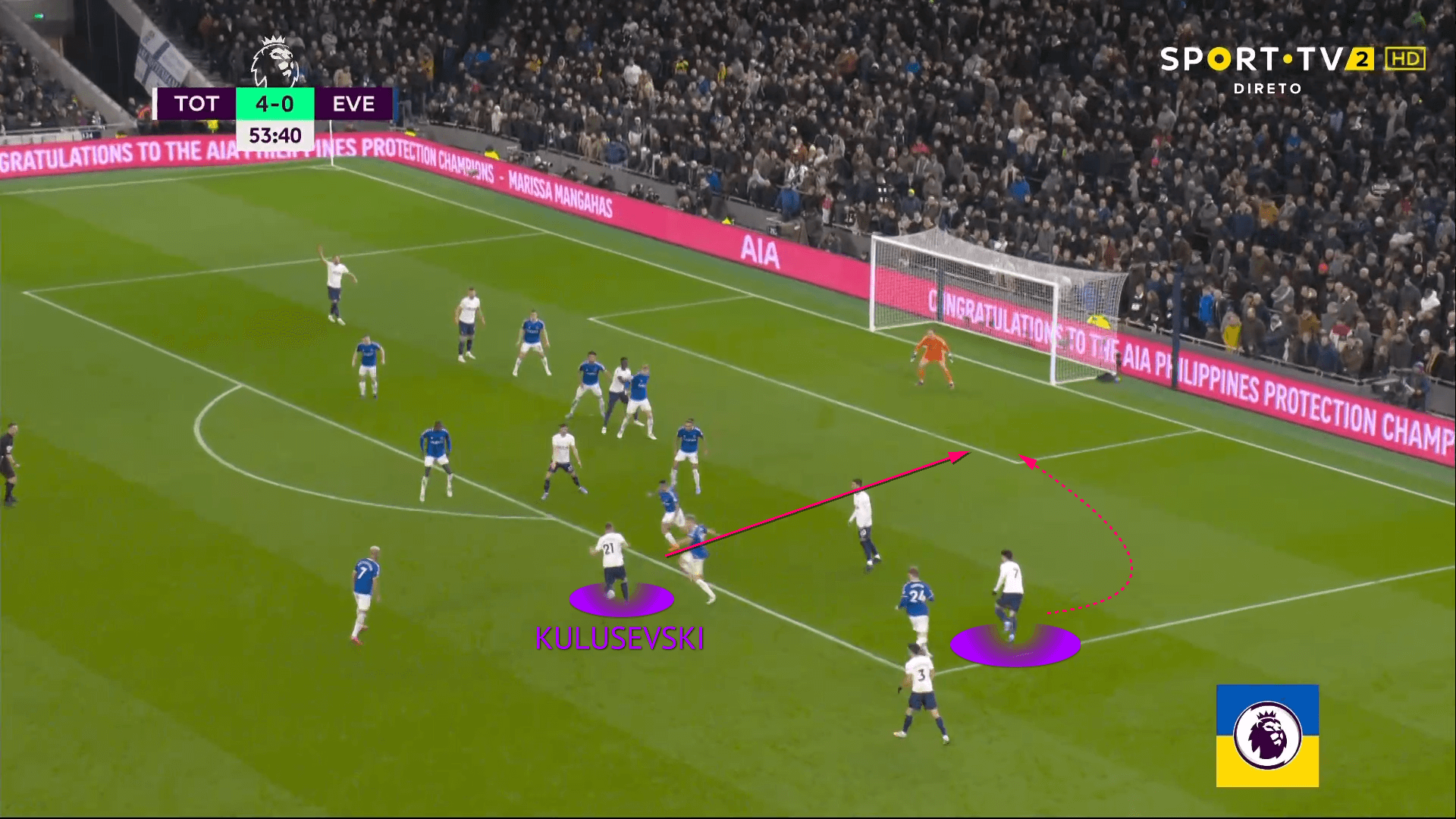 Furthermore, at 6’1, Kulusevski has a rangy frame, and he uses it to good effect, as he can securely hold up the ball and retain it securely while in the final third. Overall, Kulusevski can create can combine, while keeping attacks alive and adding to the goal tally. The Swede’s introduction has added balance to the front three rather than carnage.

The differences between the two forwards can be displayed through their actions within similar areas of the field. Here, Lucas is contested just inside of the opposition’s box, 1v1. If Lucas surveyed his surroundings, he would have noticed the lack of options inside the area, resulting in him being patient and keeping the attack alive. Instead, he slips a hopeful, yet impractical cross, resulting in an unsuccessful attack. 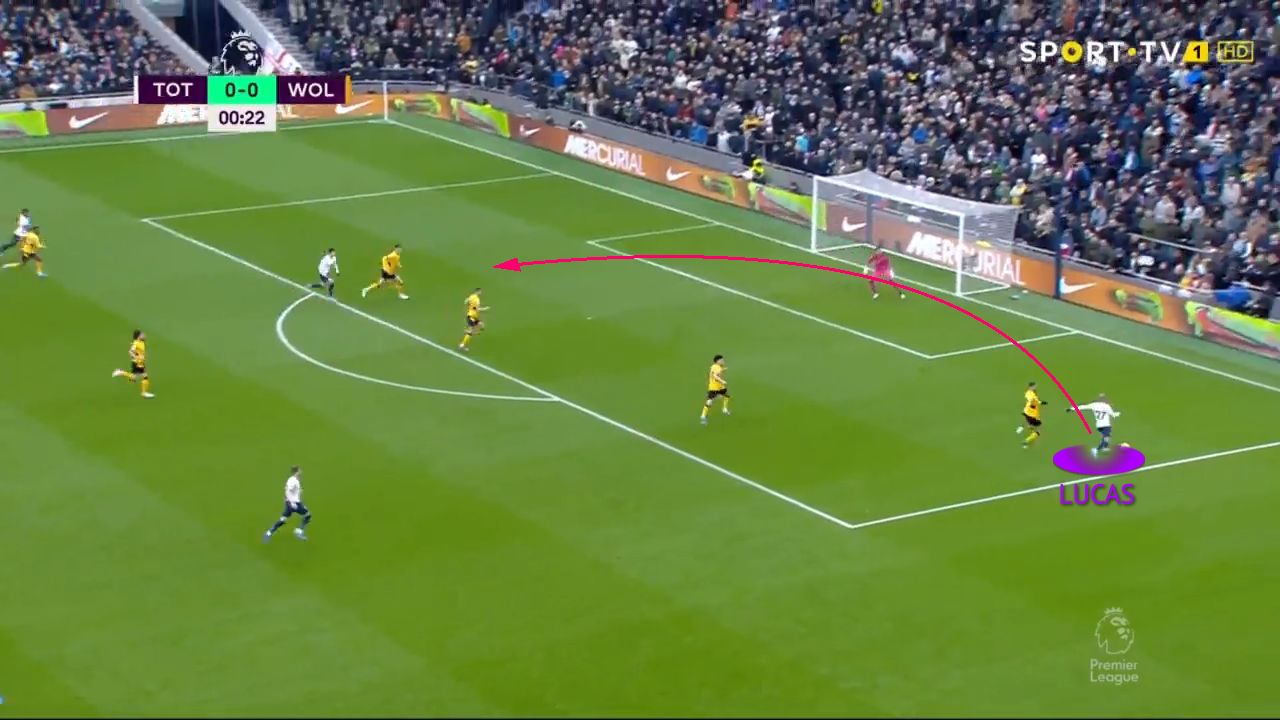 Here, Dejan Kulusevski is in the same position in possession, this time contested by Tyrone Mings. The difference demonstrated by Kulusevski, compared to Lucas is, that Kulusevski takes a slight look up, noticing attacking options ahead are limited. 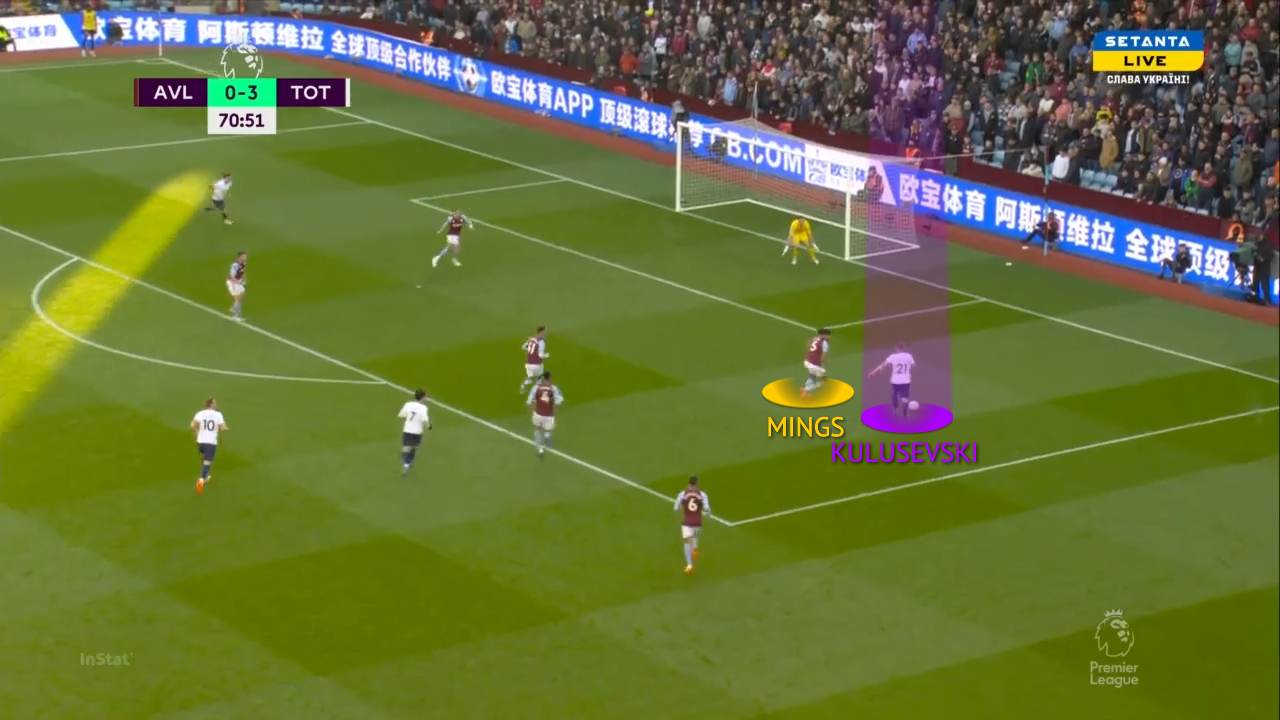 Instead of a hopeful cross, the Swede slows down the attack, cuts inside to buy time, allowing his fellow attacks to penetrate the penalty area. When the time is right, he plays a nicely weighted ball to Heung-Min Son, who converts. 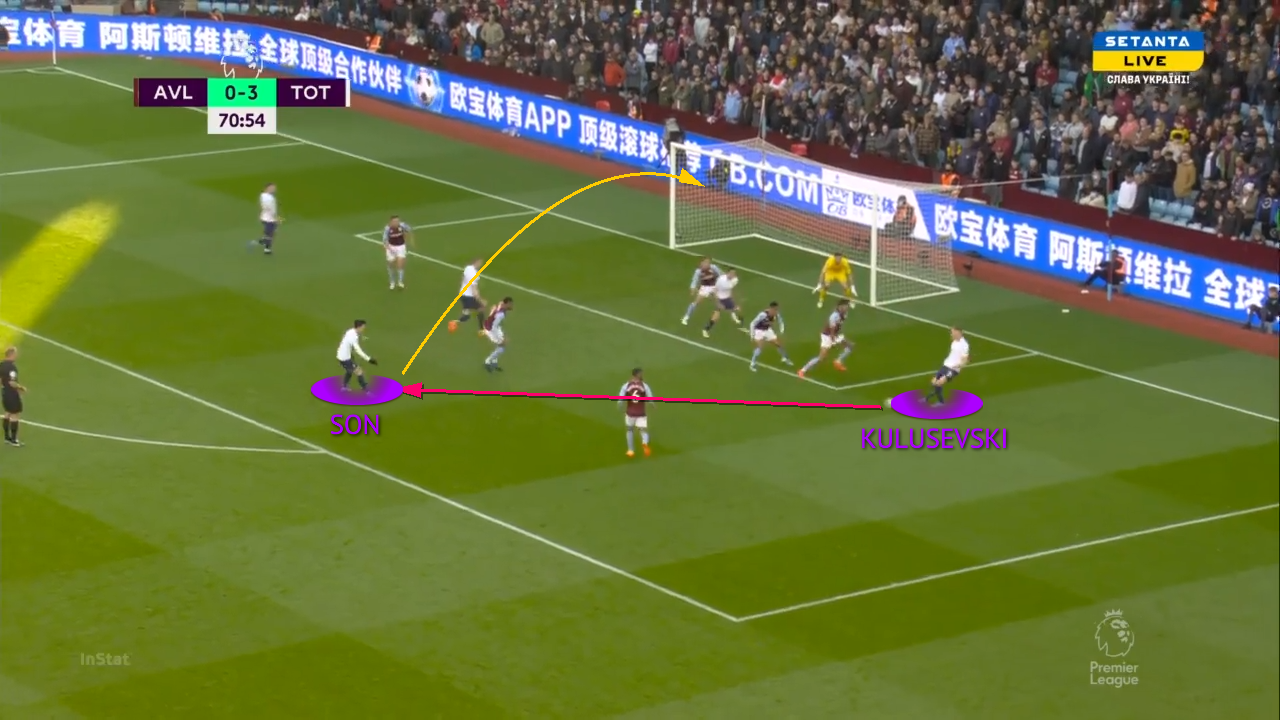 While adding the needed composure in the final third, also adds functionality to Antonio Conte’s 3-4-3. With the balance he adds to the Son and Kane lead attack, his combination play has also added value to the right wing-back position. Before Matt Doherty’s injury, the Irishmen and Kulusevski formed a brilliant partnership on the right-hand side and were able to progress the ball forward more adequately. This new partnership has made Spurs more stable, as during previous matches, opposition teams would acknowledge Spurs’ wing-back imbalance and simply defend one side, leaving the right-hand side open. These types of tactics are not possible, and Antonio Conte’s Tottenham now have a dual-threat element to them.

Ever since the arrival of Dejan Kulusevski and forming of Spurs’ top-notch attack, the debate has already begun considering which front three reigns supreme. From different viewpoints, real comparisons can be made between the two attacking line-ups. Diogo Jota has been featured as Liverpool’s centre-forward but has mostly featured as an all-rounder with an eye of an old-school poacher. Harry Kane’s game has transformed over the last couple of years. Kane’s all-around game is still ever-present, but Kane’s dropping into deeper spaces has become more constant, and his connection with Son has become even stronger. 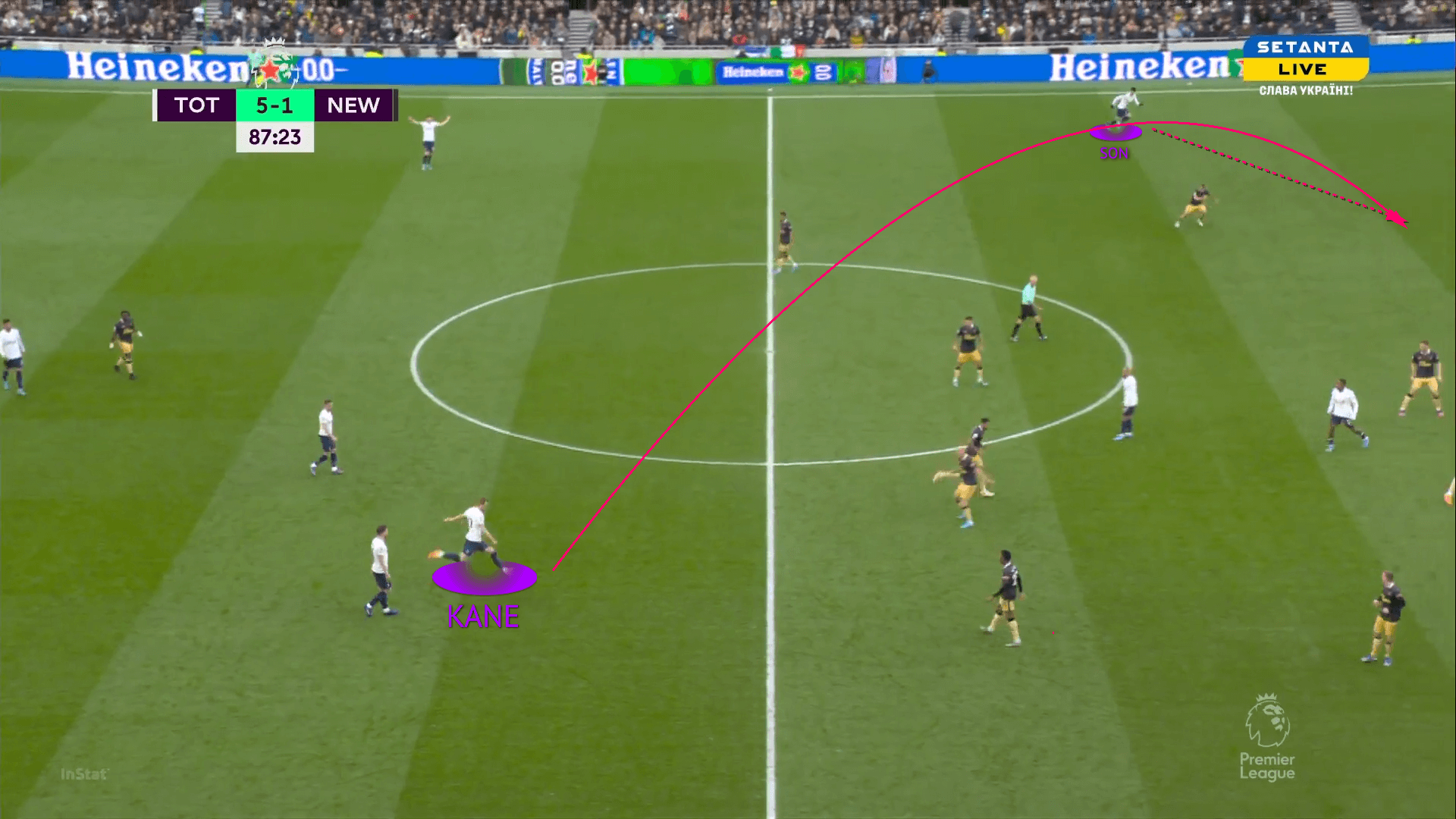 Heung-Min Son and Sadio Mane share many commonalities, both players who are stars in their position on the left wing. Primarily, both players look to drive in from the left side and either create for others or score for themselves. So far this season, Sadio Mane has scored 14 goals, which is slightly behind the Heung-Min Son, as the South Korean has scored 17, which is the second-highest in the Premier League.

Here we have Mo Salah in possession, located in the right half-space. Sadio Mane occupies the same position of Heung-Min Son, high and wide on the left side, making a darting run to the back post. 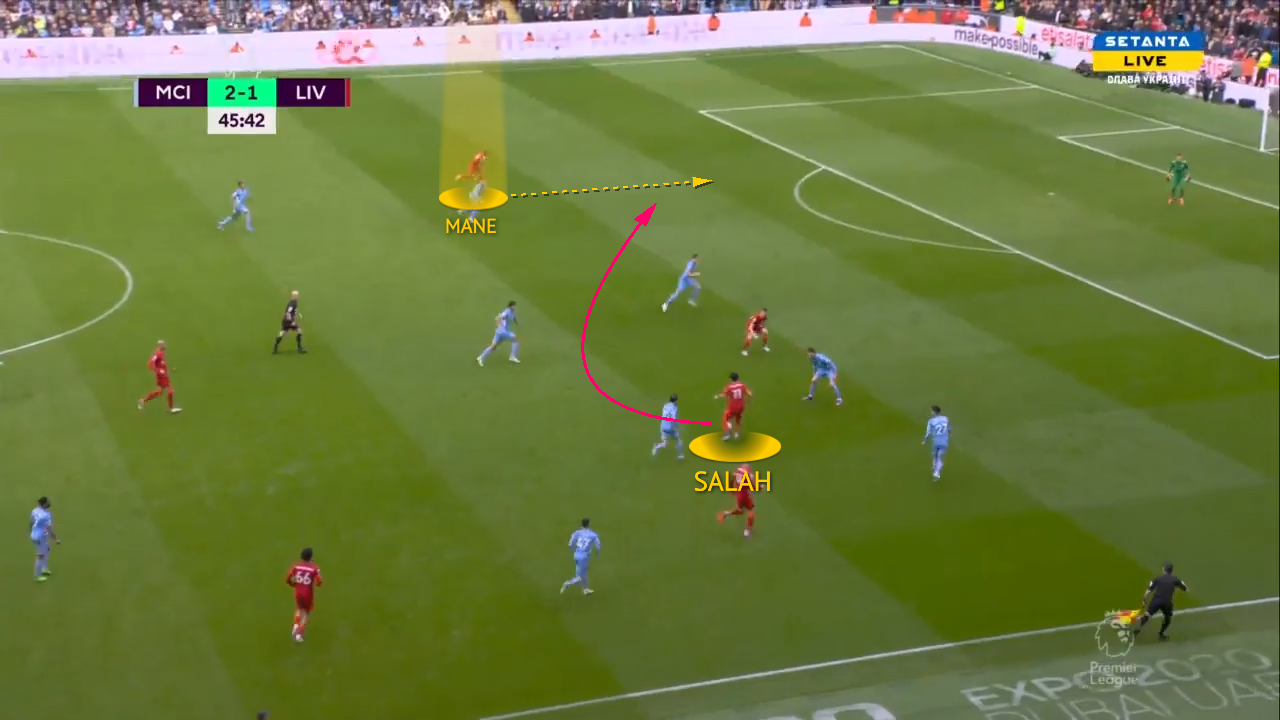 Lastly the comparison between Dejan Kulusevski and Mohammed Salah. These two players are similar in a sense, simultaneously, they are quite different. Both right-wingers are left-footed and tend to cut inside. With this being said, Kulusevski does not have the same speed Mo Salah possesses and plays at a slightly slower tempo. Salah plays a perfect rhythm, knowing the right times to speed up and when to slow down and add a sense of calm to an attack.

Antonio Conte’s Spurs have been weird and wonderful; with new January signing Dejan Kulusevski adding to the attacking talent they already had at their disposal. While Spurs have finally found their right-winger, a position they have not found success in, in a while, how they finally got there has not been a simple task.

During the early segment of Conte’s reign, Lucas Moura was Spurs’ third attacker next to Son and Kane and started quite well with good performances against Vitesse and Norwich City. But soon, his form began to dwindle, leaving a massive hole for the third spot within the attacking trio. The profile Lucas presents is not complimentary with both Son and Kane.

This is the key difference between Lucas and Kulusevski, the Swede adds a certain dimension the Brazilian cannot. The clear passing lanes that are usually ignored or not seen or the appropriate touch needed in a tight and confined area will be utilised correctly by Dejan Kulusevski, instead of possibly wasted by the former. This is not to indicate that Lucas Moura is a poor player, quite the contrary. Lucas can play and contribute, but Dejan Kulusevski extinguishes carnage and replaces it with balance.