Very few people outside Atalanta knew of the Bergamo club’s 19-year-old Swedish winger Dejan Kulusevski at the beginning of August. Since then, the Swede has performed brilliantly on loan at Parma, forced his way into the Swedish senior national team, been prized at around €50m and linked with Manchester United. It’s been a remarkable rise for Kulusevski with two goals and five assists in twelve Serie A games. This tactical analysis scout report looks at his role in Parma’s tactics and what kind of player he is.

Kulusevski is a winger and has been used on the right at Parma. His profile is very interesting since he combines pace and dribbling ability with an excellent technique and clever movement. His ability to play in tight spaces suggest he should eventually be able to make the transition into a number 10 quite seamlessly. Now, let’s look at Kulusevski’s abilities in more detail.

As mentioned above, Kulusevski is an excellent dribbler. In fact, only two players, Riccardo Orsolini and Jeremie Boga, have attempted more dribbles than Kulusevski. The Swede averages 7.13 dribbles per game and also makes 2.46 progressive runs per 90 minutes. These statistics highlight his ability to progress the ball on his own, which is an important quality in a Parma side that is often set up to hit opponents on the break.

Kulusevski’s acceleration, technique and creativity make him a nightmare for a full-back to face. The sequence below highlights why. In the first image, Kulusevski receives the ball facing his own goal with a defender putting pressure on him. The 19-year-old realises that the space is therefore behind the defender, flicks the ball between the defender’s legs, spins and runs past his opponent. 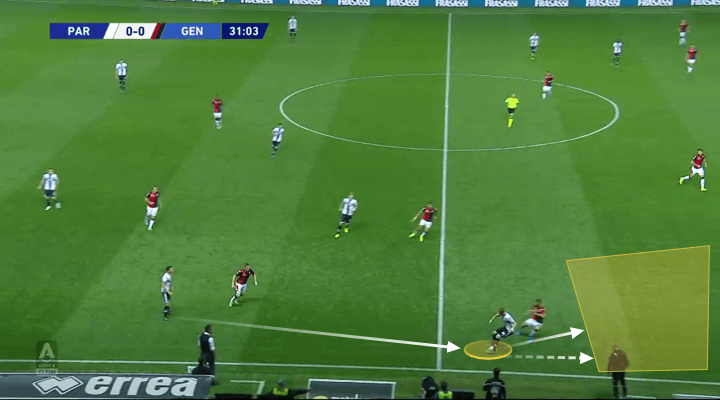 Next, Kulusevski has attracted a midfielder to put pressure on him. Most wingers would continue down the wing here and look to beat their opponent for pace, yet Kulusevski identifies the space available inside if he can beat the midfielder. Thus, the Swede cuts inside on his left foot, beating the opponent in the process. 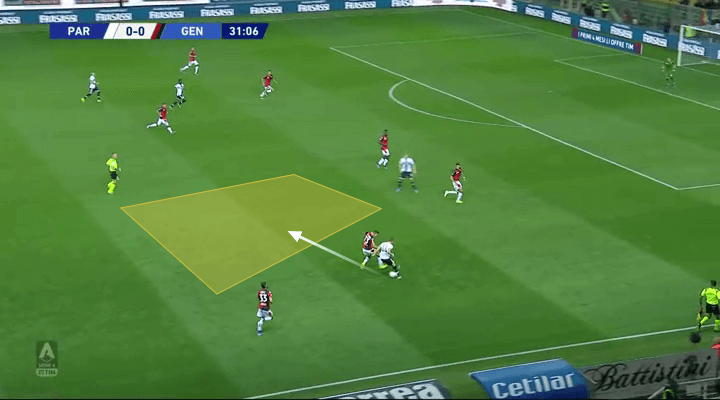 Now, Kulusevski is on his favoured left foot and has created a good amount of space for himself. Being as direct as he is, he instantly looks to play Gervinho through on goal. On this occasion, the pass is intercepted but the overall action from the youngster highlights his sublime dribbling ability. 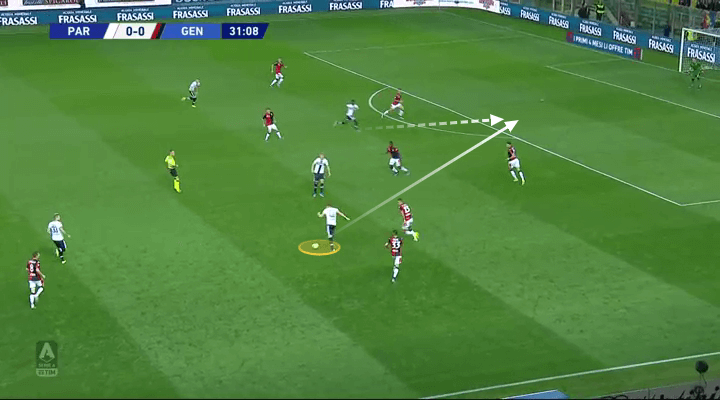 Kulusevski isn’t only capable of marauding down the wing, however. He is very clever with his movement and often looks to move into central areas from where he can combine but especially create chances from through balls. The image below highlights this movement. Here, Kulusevski has left the right-wing and moved inside to receive from his teammate. 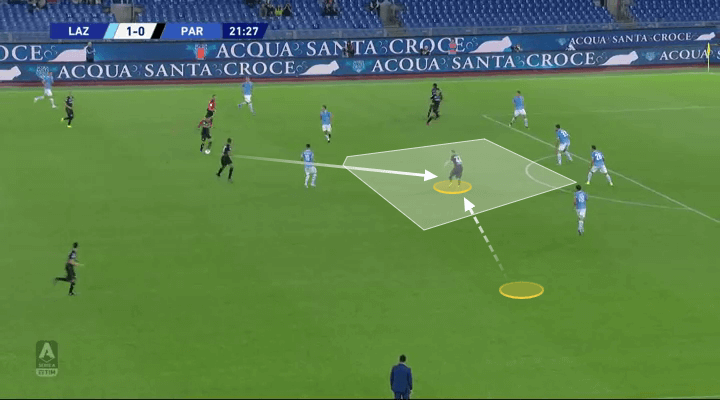 Consequently, Kulusevski can then combine with his striker. On this occasion, he threads an excellent through ball to set up a 1 v 1 for his striker. 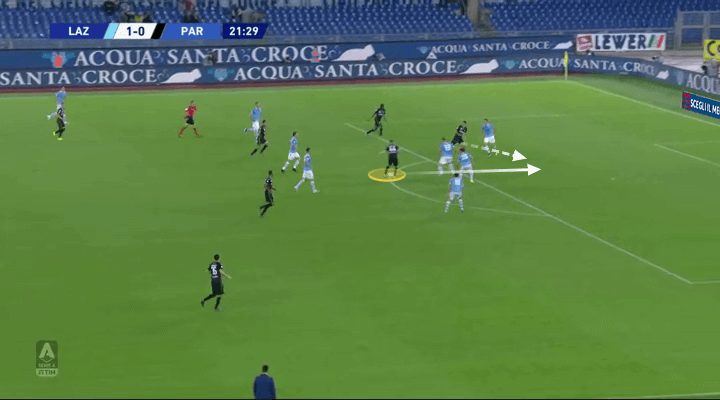 Crucially when he gets into these central positions, the Swede is comfortable enough to receive while surrounded by players and then use the ball cleverly in the next action. This is due to his excellent decision-making, which helps him to make very good decisions and use the ball well even under intense pressure from defenders. 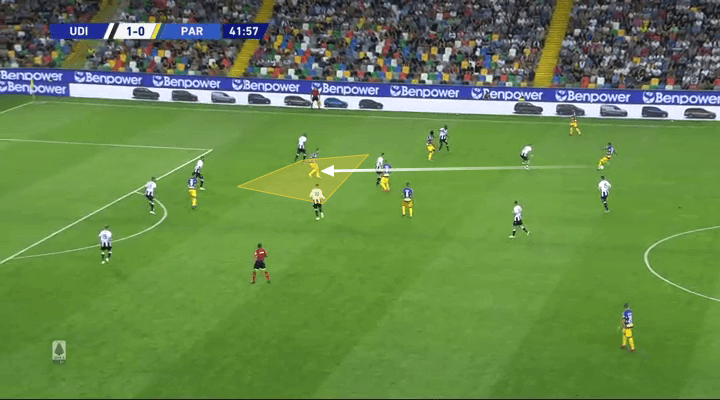 Creative passing in the final third

Along with his decision-making, Kulusevski’s creative passing around the penalty area is what makes him so exciting. His vision, understanding of when to release the ball and weight of pass are all superb. In fact, Kulusevski ranks second in Serie A for expected assists, second for deep completions, third for through passes and fourth for key passes. This is fantastic for a complete Serie A newcomer.

The below image is the next action of the image above. Here, Kulusevski (yellow) has turned around and threads the ball through for Gervinho, who goes on to score. 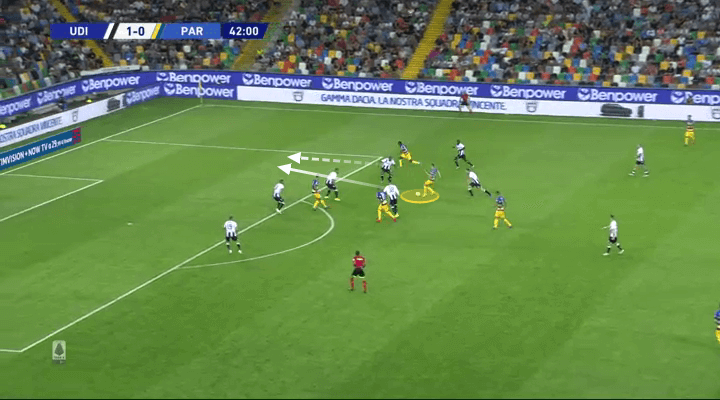 In the image below, Kulusevski (yellow) sets up Andreas Cornelius’s equaliser against Torino. Driving diagonally towards the left, Kulusevski drops his shoulder and threads a pinpoint pass into the path of the Dane, who finishes emphatically. 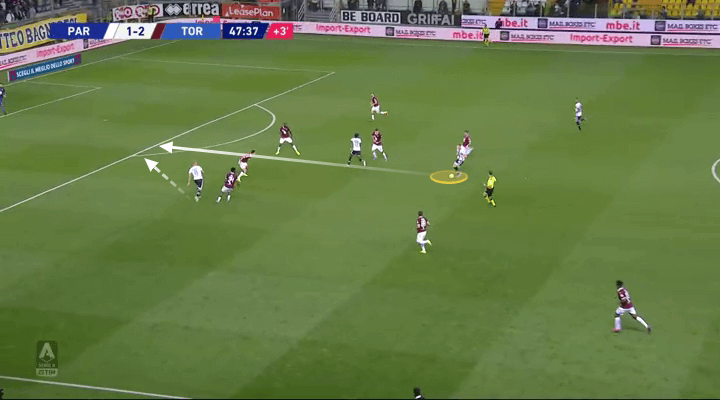 The image below highlights Kulusevski’s assist against Genoa. After a switch of play, Kulusevski (yellow) has managed to cut onto his left foot and attracted two defenders. Instead of rushing a shot, the winger slides the balls sideways to set up Juraj Kucka (white). The Slovakian then scores with a left-footed drive. 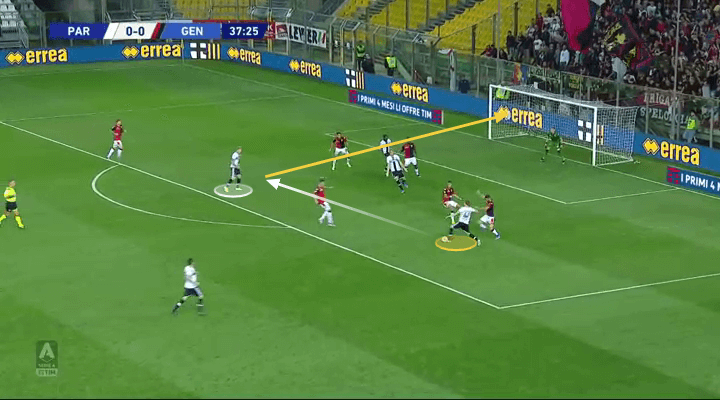 Finally, I also want to touch on Kulusevski’s quality in attacking transition. With his pace, acceleration, intelligence and ability to carry the ball forwards, Kulusevski is very dangerous on the break. In the image below, we can see one occasion when the Swede turns defence to attack and sets up a good chance. After receiving a cleared cross, Kulusevski manages to hold off Marcelo Brozović and attracts the attention of Diego Godín before slipping the ball through for Yann Karamoh. This passage of play highlights his quality since he can combine physicality, technique and intelligence to make up an intriguing prospect. 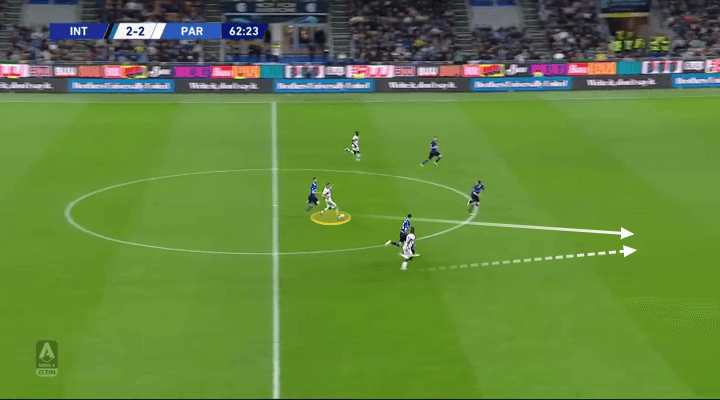 As this analysis has shown, Dejan Kulusevski is a huge talent. Still, he has only played twelve Serie A games for Parma so no one should get carried away. If he can continue to build on these performances, Kulusevski could definitely become a top-level player in most European leagues. His skill set suggests he can be a central creator as well as a wide threat, and this fact makes him such an interesting player to follow in the next couple of seasons.