Mohamed Camara: Why the Malian midfielder will excel under Philippe Clement at AS Monaco – scout report

RB Salzburg are a club known for buying young talent at a relatively low price, developing them, and then selling them on a few years later for a large profit. This summer transfer window was no different, with Brendan Aaronson and Rasmus Kristensen being sold to Leeds United, and Karim Adeyemi joining Borussia Dortmund. However, the most recent player to depart from the Austrian champions may be one of the more missed this season, 22-year-old Malian defensive midfielder Mohamed Camara.

The principality club paid roughly €14 million for the midfielder’s services, with this tactical analysis and scout report taking a look at the Malian’s strengths, and how he fits into the project that Philippe Clement is developing at Monaco. 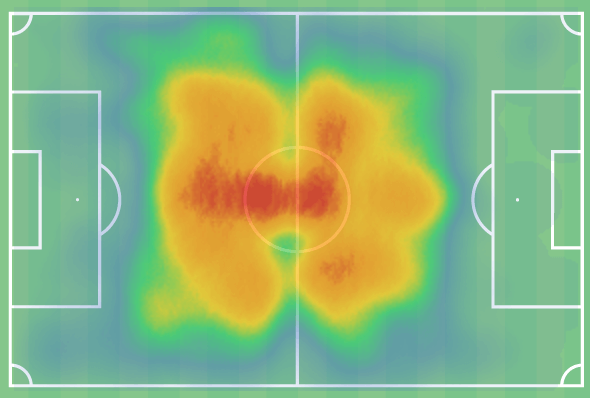 The heat map above shows the typical positions that Mohamed Camara normally took up with RB Salzburg last season. Under German boss Matthias Jaissle, Salzburg are set up tactically in a 4-4-2 diamond formation, with Camara playing at the base of the midfield as the sole defensive midfielder. This is well illustrated in the heat map, with the Malian midfielder staying in the central spaces. He does not normally venture far into the attacking third of the pitch, and he also rarely gets pushed back into his own penalty box.

So far this season, Philippe Clement has set his Monaco side up in a 5-3-2 formation, and Camara will likely slot into the midfield as a more defensive-minded midfield option. In Monaco’s last match against Paris Saint-Germain, Clement started Camara alongside Aleksandr Golovin and Youssof Fofana, with this likely being the new preferred midfield trio for the Belgian manager.

When it comes to trying to find Mohamed Camara’s biggest strength, it is hard to look past his ability in 1v1 defensive duels. Being the sole defensive midfielder in Salzburg’s system meant that going into defensive challenges without any help was a constant theme. While the lone attacking midfielder and the two box-to-box players may sometimes have helped out in this respect, most of the defensive midfield work normally fell on Camara’s shoulders.

When looking at the Malian’s statistics when it comes to 1v1 duels, the numbers speak for themselves. In general, the midfielder averaged 20.49 duels per 90 minutes last season in all competitions with RB Salzburg, winning 57.7% of them. When looking at this stat from a purely defensive standpoint, Camara averaged 7.14 defensive duels per 90 minutes last season, with a win percentage of 61.8%. Following in this section are some examples of the quality that the Malian midfielder possesses in these 1v1 duels. 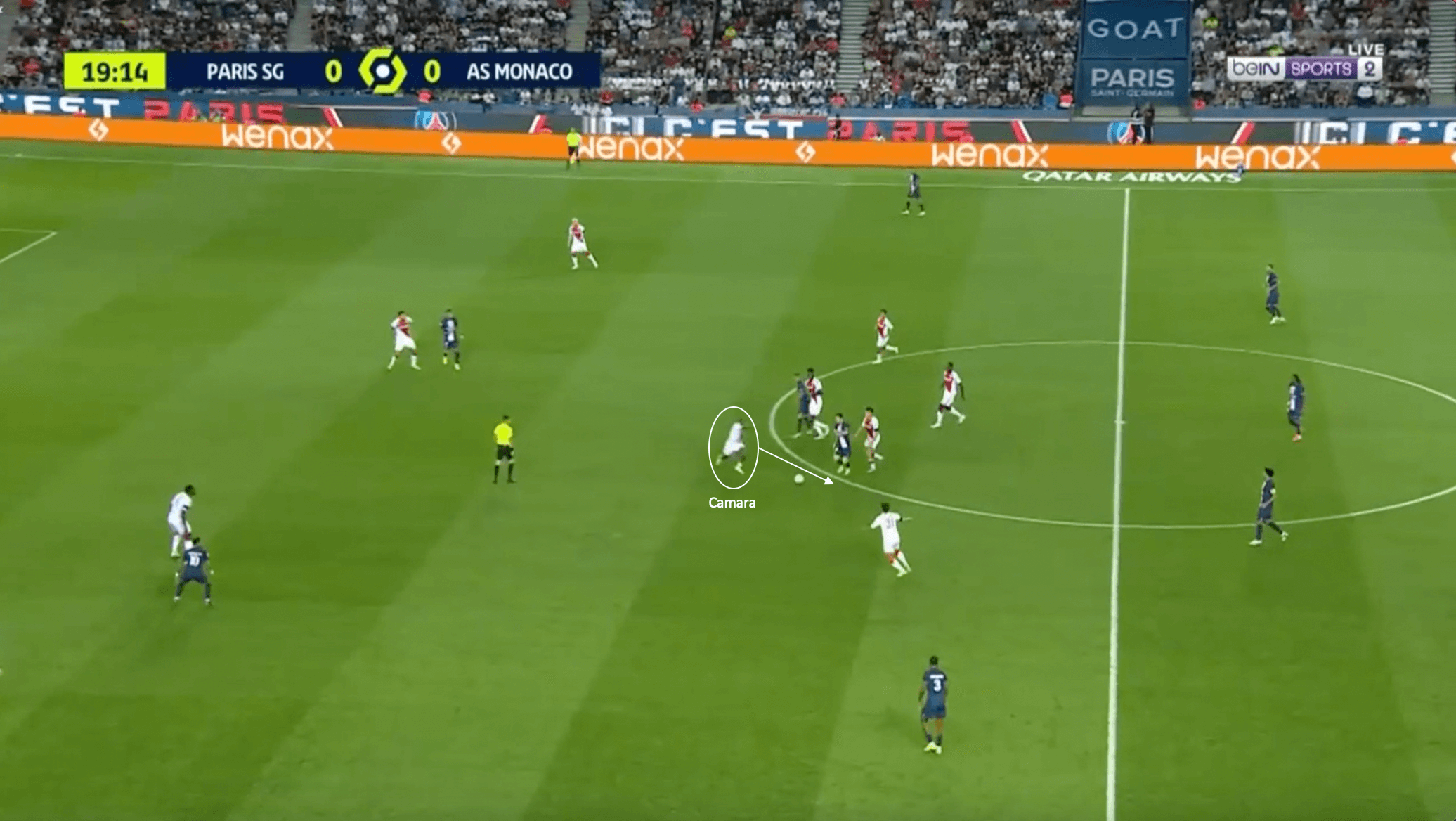 The image above shows an example of Camara’s ability to read the passes and subsequent ability to successfully commit a 1v1 challenge. One thing to note is that this is from Monaco’s match last weekend against French champions Paris Saint-Germain, and only the Malian midfielder’s second match for the club.

As the ball is played to the PSG attacker, Camara is able to anticipate this pass and quickly close down the opposition player. Camara dives in to attempt the 1v1 challenge, winning the ball and preventing a dangerous attacking sequence from the French giants. Though it is not always the best idea for midfielders to leave their feet when committing to 1v1 challenges, Camara is able to use these types of challenges to his benefit. 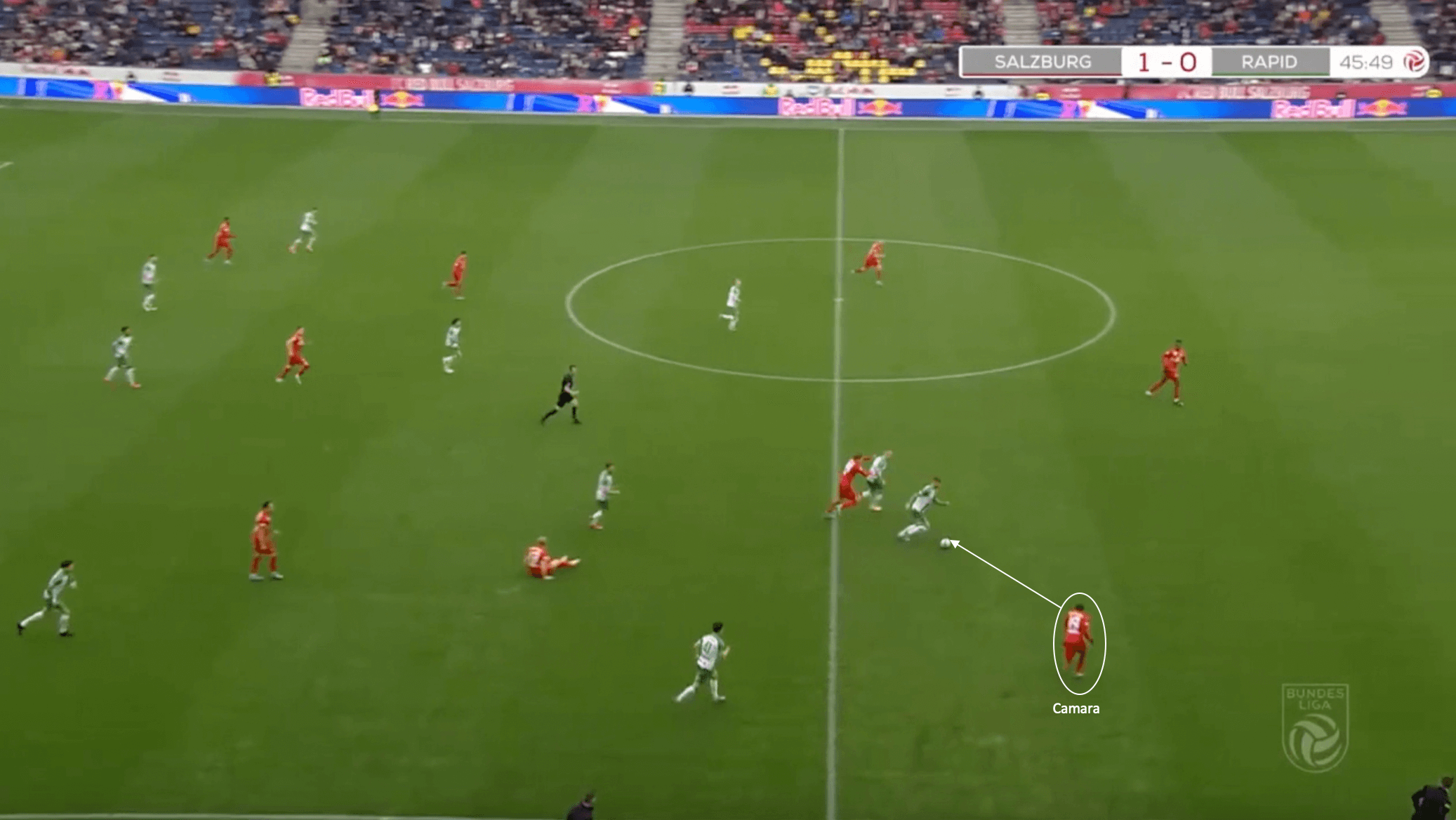 The image above shows another example of the quality that Mohamed Camara possesses in these 1v1 defensive duel moments. In this phase of play above, the midfielder has found himself in a wider position, giving him less time to get back into position in the case that Salzburg dispossessed and counterattacked.

That is exactly what happens in this example. Salzburg are dispossessed in the middle third of the pitch, with the opposition looking to quickly counterattack. Camara is able to quickly react and get back inside centrally, cutting off the path of the opposition attacker and winning possession back, stopping a dangerous counterattacking sequence in the process. 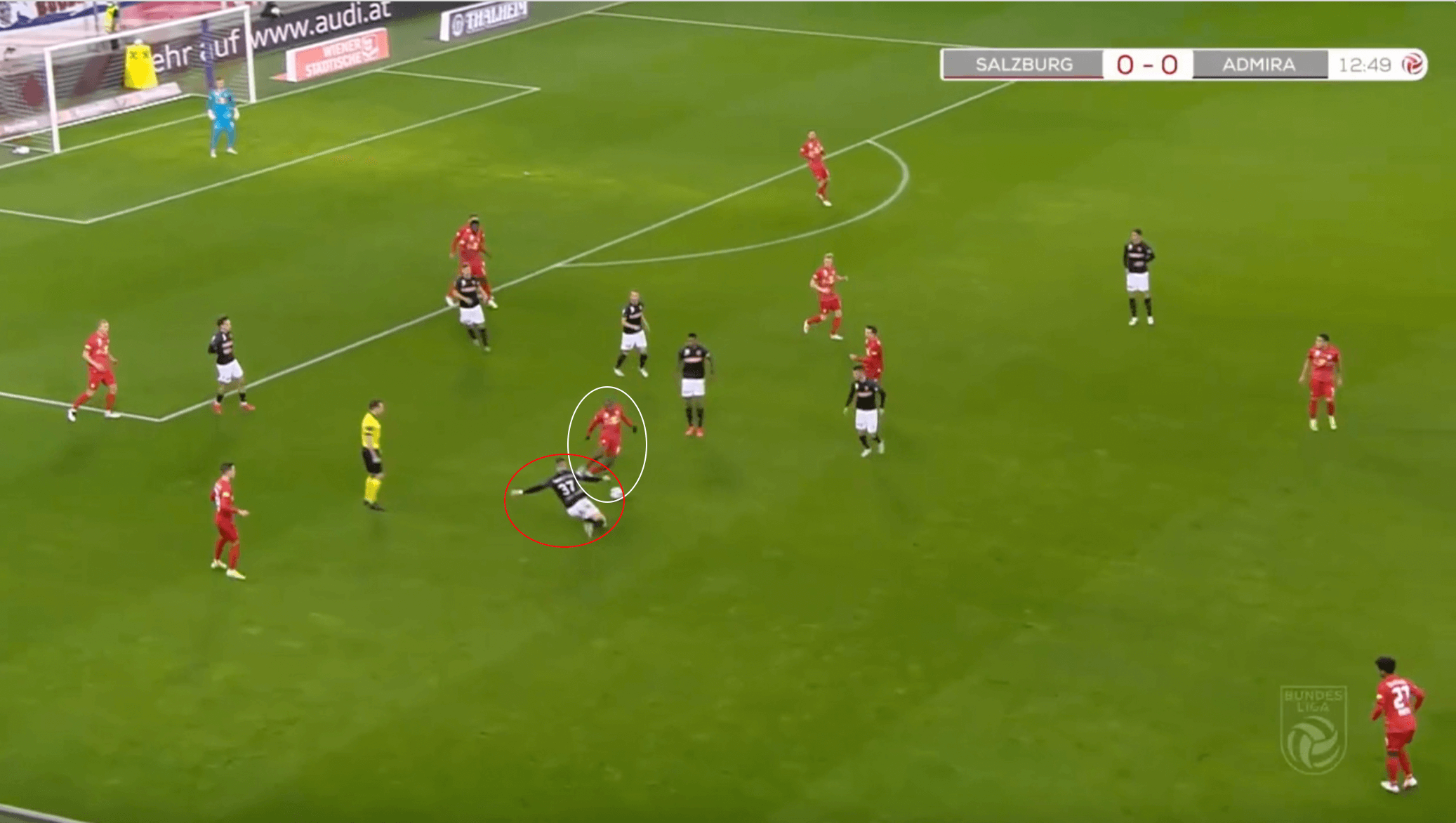 The final example for this section shows another example of Camara’s 1v1 defensive ability, this time in a more dangerous position, his own defensive third. The Malian is able to engage in a loose ball duel, winning it and proceeding to dribble up the field after gaining possession. Though this occurred in a more dangerous area of the pitch, it still showcases Mohamed Camara’s constant ability to be successful in 1v1 defensive duels.

This section has been able to demonstrate the ability that the Malian midfielder has when it comes to 1v1 duels, particularly on the defensive side of the ball. This is undoubtedly his biggest strength and should be a welcome addition to Philippe Clement’s midfield at AS Monaco.

The other big strength that Mohamed Camara possesses is his range of passing from deep, with the Malian being a key player at spraying the ball from deeper positions into the final third of the pitch to attackers. Camara does not contribute many assists to his side, but his ability to spray passes from these deeper lying midfield positions helped his Salzburg side get past low blocks and in behind their defence with relative ease at times.

In all competitions for RB Salzburg last season, the midfielder averaged 56.38 passes per 90 minutes, with a completion rate of 87.7%. With the main thing we are looking at being Camara’s long passing ability, the Malian averaged 6.19 long passes per 90 last season with Salzburg, with a completion rate of 56.9%. This section will take a look at the long passing ability and range of Mohamed Camara, as well as how he creates chances from these deeper-lying positions. 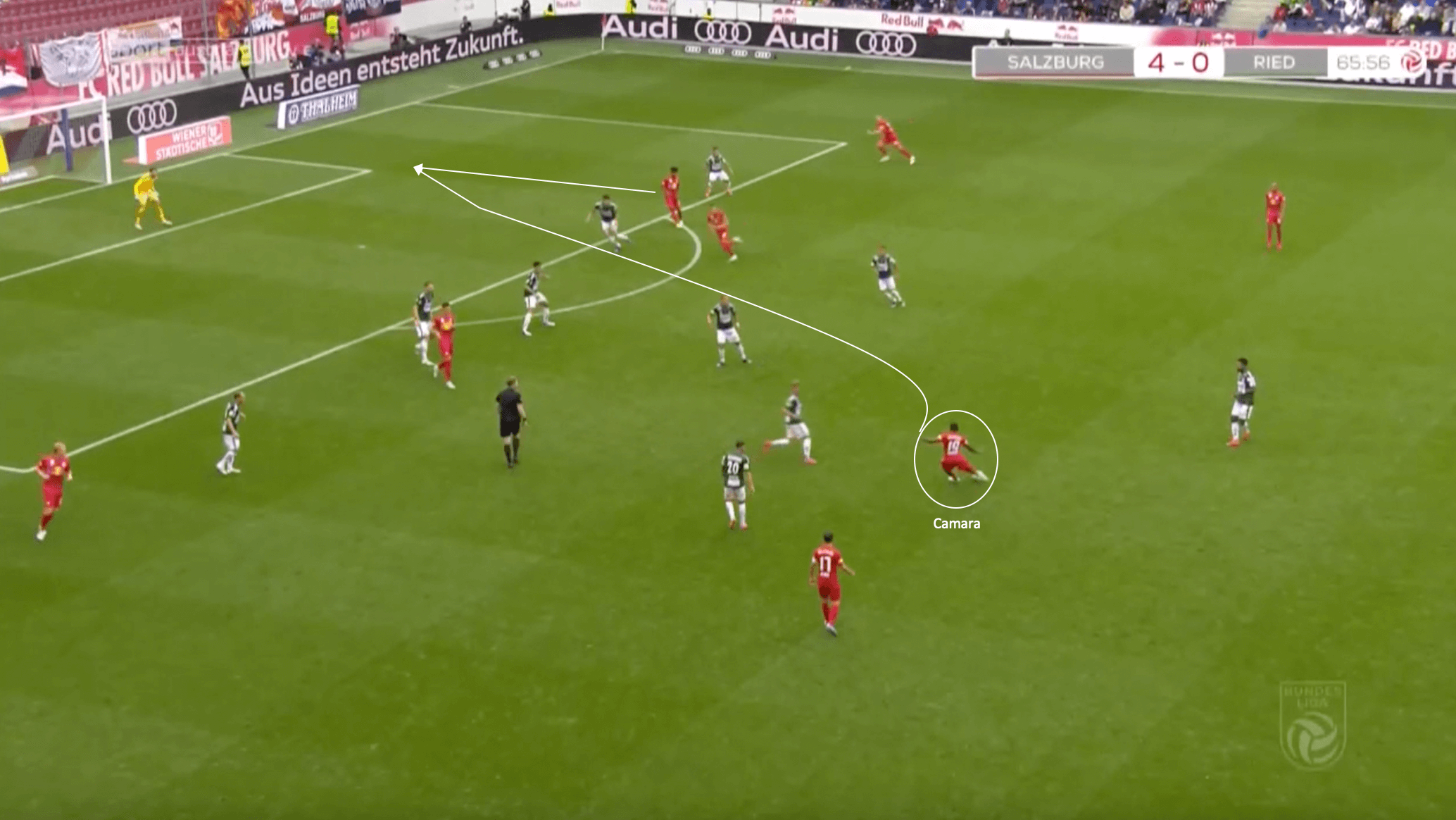 The image above shows an example of the long passing range that the Malian midfielder possesses. In this phase of play, Camara is in possession in a deeper midfield position and looks to find an open target in the box. With the opposition defence playing such a low defensive block, the only option for the midfielder is to attempt to play it over the backline and into the feet of the attackers inside the box.

The ensuing ball from Camara is perfectly weighted and finds the feet of Karim Adeyemi to the right of the penalty spot. Unfortunately, Adeyemi’s first touch is poor, with the ball getting sent out of play. However, this was still able to demonstrate the long passing range of Mohamed Camara. 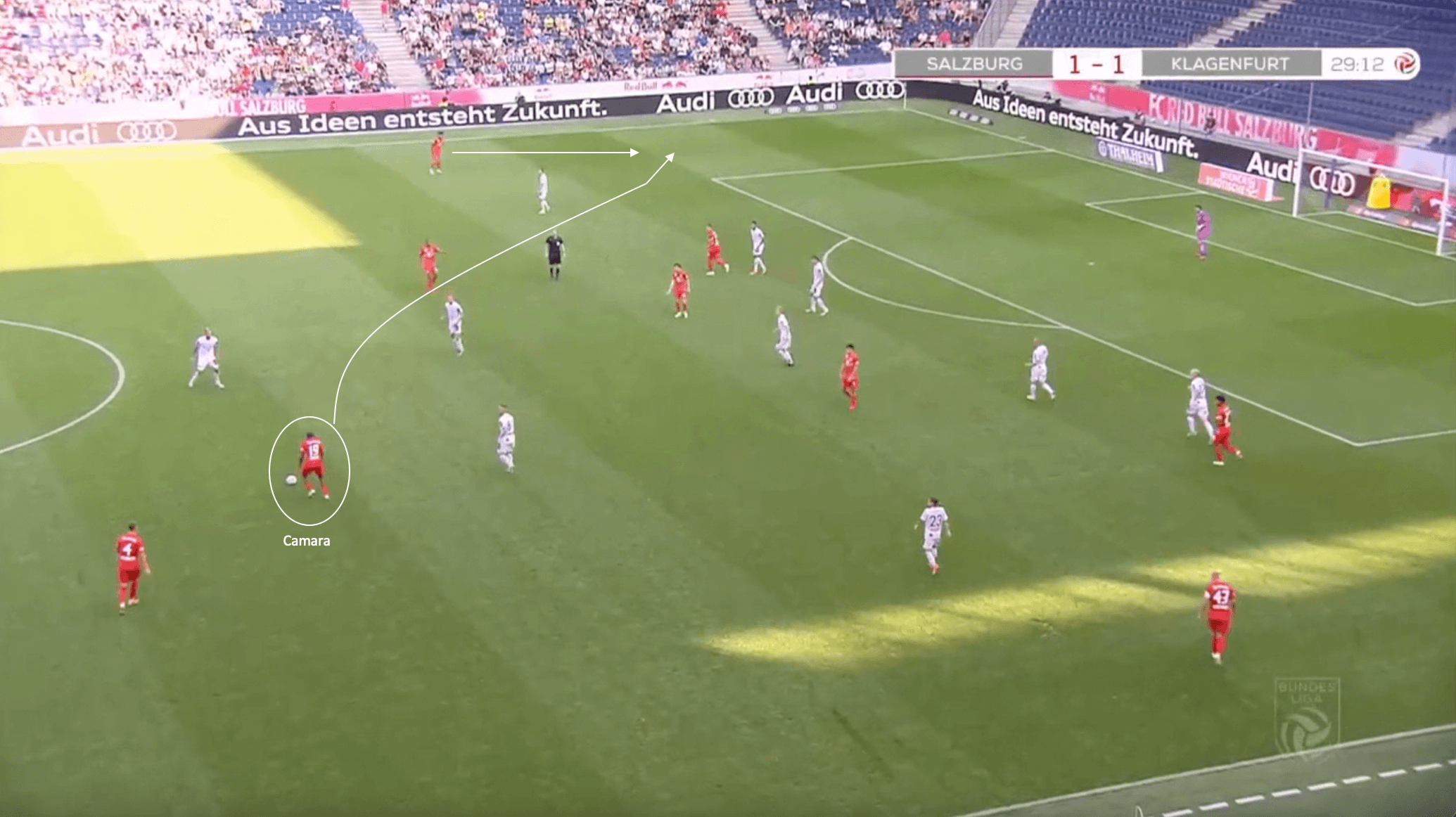 The image above shows another example of the long passing ability that Mohamed Camara possesses and the ability for him to break down opposition low blocks with this passing range.

In the phase of play above, the Malian international midfielder spots the run of the Salzburg attacker running down the left touchline. Notice as well how the opposition backline is again sitting in a low block, preventing Salzburg from playing their normal possession-based game. This allows the midfielder the time and space to pick out the passing option and play over the top of the opposition defence. This ability of the Malian to pick out these passing options from deep was a key tactic for Matthias Jaissle last season at Salzburg. 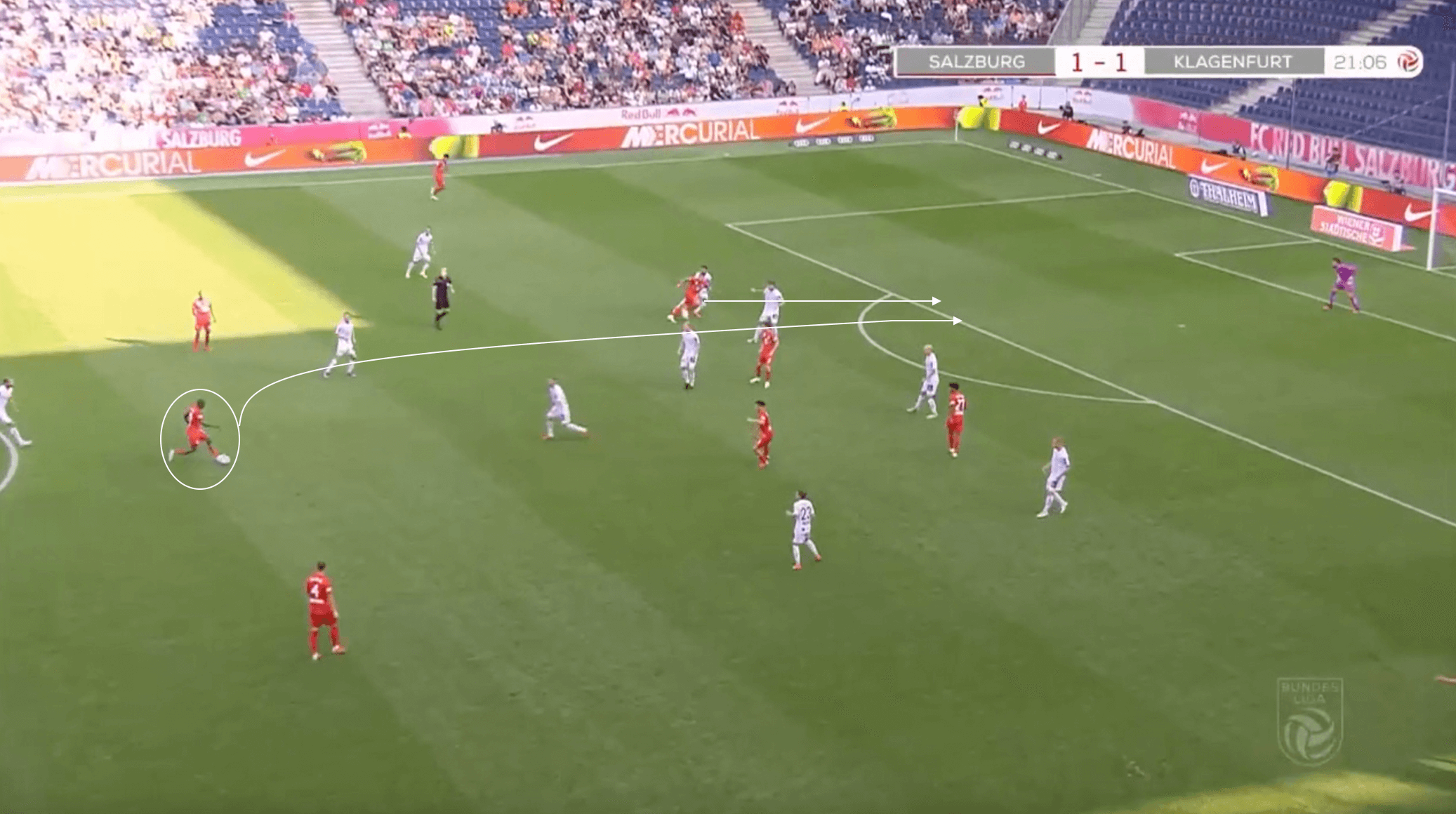 The final example for this section shows another instance of the chance creation ability of Mohamed Camara when it relates to his long-passing ability. All of these examples have the same common theme, the opposition defensive unit is sitting in a low block and looking to absorb pressure. This tactic forces Salzburg to look for the options over the top, with it almost impossible for the ball to be played through the middle on the ground.

The Mali international notices the attacker looking to make a run through the opposition’s defensive line and plays a perfectly timed pass over the top and into his path. Unfortunately, the pass is just out of reach of the attacker, with the goalkeeper able to claim the loose ball.

Though he relies more on his defensive capabilities, Mohamed Camara is a very good chance creator and ball distributor, especially from deep-lying positions. This will be a welcome addition for Philippe Clement’s Monaco side, having a deep-lying playmaker who can impact his side both on and off the ball.

As this scout report piece has illustrated, Mohamed Camara will be a welcome addition to both Philippe Clement’s tactics and the Monaco midfield. Though he is a very aggressive defensive midfielder who excels in the defensive side of the game, especially in 1v1 duels, he also has quality on the ball, as his long passing range demonstrates.

This analysis has only gone over two of the strengths that the Malian international midfielder possesses, and he will surely refine his game even more with the principality club.

RB Salzburg are a club known for buying young talent for a low price, developing them, and then selling them for a profit in the future, with Mohamed Camara being another great example of the excellent recruitment policy that the Austrian club possesses.