Belgium came into EURO 2020 as the top-ranked side in the world, and with the weight of expectation on their shoulders. Their own version of a ‘Golden Generation’ has been around for a while now, and it seems as though this tournament is the last chance for some of them to mark their international careers with a trophy, even with a World Cup taking place in just around 18 months. Roberto Martinez picked a squad filled with players who have a lot of tournament experience – the majority of them were around for the 2018 World Cup and even the 2016 Euros, and with a relatively straightforward group draw, most observers expect the Red Devils to go far at this tournament.

Russia, on the other hand, are looking to emulate their fairytale run at the 2018 World Cup which took them to the quarter-finals on home soil. With two of their three group-stage games at home, there is every chance that they could make it to the knockout rounds, and in Stanislav Chercheshov, they have an astute tactician who is not afraid to change things up based on the opposition. Russia are expected to be a largely solid and unspectacular side, and would certainly have viewed their opening match against Belgium as a freebie, given the strength of their opponents.

This is a tactical analysis of the EURO 2020 Group B game between these two sides, which ended with an emphatic 3-0 win to the Belgians. 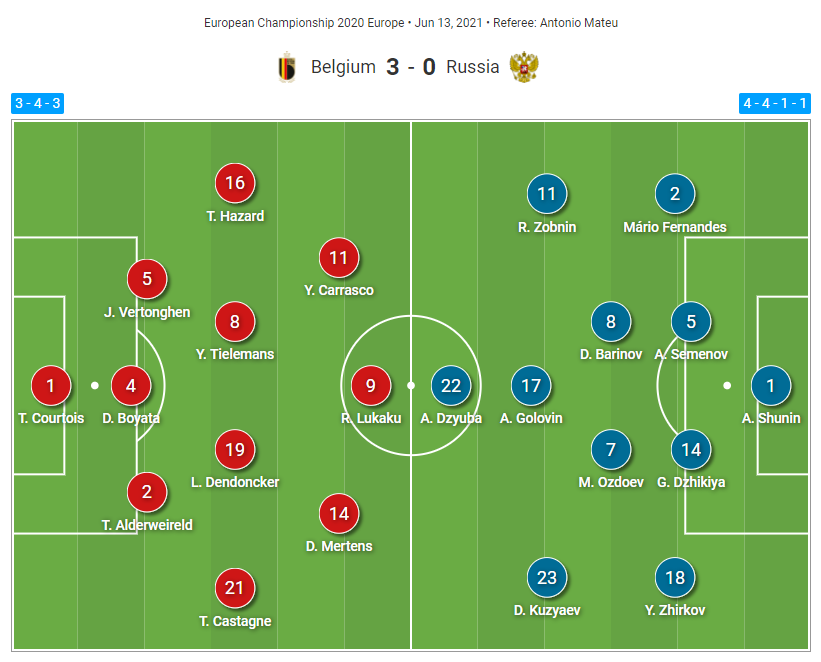 Martinez sent the Belgians out in their expected 3-4-3 shape, with a couple of notable absentees in Eden Hazard and Kevin De Bruyne, both of whom are recovering from injuries and were not fit to start, although Hazard was on the bench. Dedryck Boyata lined up in central defence alongside Toby Alderweireld and Jan Vertonghen, and while Timothy Castagne got the nod at right wing-back, his night, and indeed his tournament, was ended early after a clash of heads that left him with a broken eye socket. Borussia Dortmund’s Thomas Meunier came on to replace him, with the younger of the Hazard siblings, Thorgan Hazard, on the opposite flank. The Premier League pair of Leander Dendoncker and Youri Tielemans were in midfield, with Yannick Carrasco and Dries Mertens playing behind the excellent Romelu Lukaku, who helped himself to two goals on the night.

In Russia’s case, they lined up in a 4-4-1-1 formation, with the veteran Yuri Zhirkov at left-back and Mario Fernandes at right-back. AS Monaco playmaker Aleksandr Golovin got a start behind Artem Dzyuba, who has been scoring freely for Zenit Saint-Petersburg and will hope to bring that form to the tournament.

One of the most notable aspects of Martinez’s tenure has been his strict adherence to a set style and philosophy. Belgium have largely played with a three-man defence during his time in charge, and this 3-4-3 shape has now become their default lineup against all teams. It has been quite impressive to see the way in which Belgium have been able to adapt to this style of play, as the lack of coaching time afforded to international managers usually means that they cannot instil expansive and progressive systems unless there is familiarity between players from their time together for their clubs. Martinez has made depth and width core principles of Belgium’s setup, and these were on display in Saint Petersburg on Saturday night, as Russia were unable to cope with the Red Devils shape and spacing. 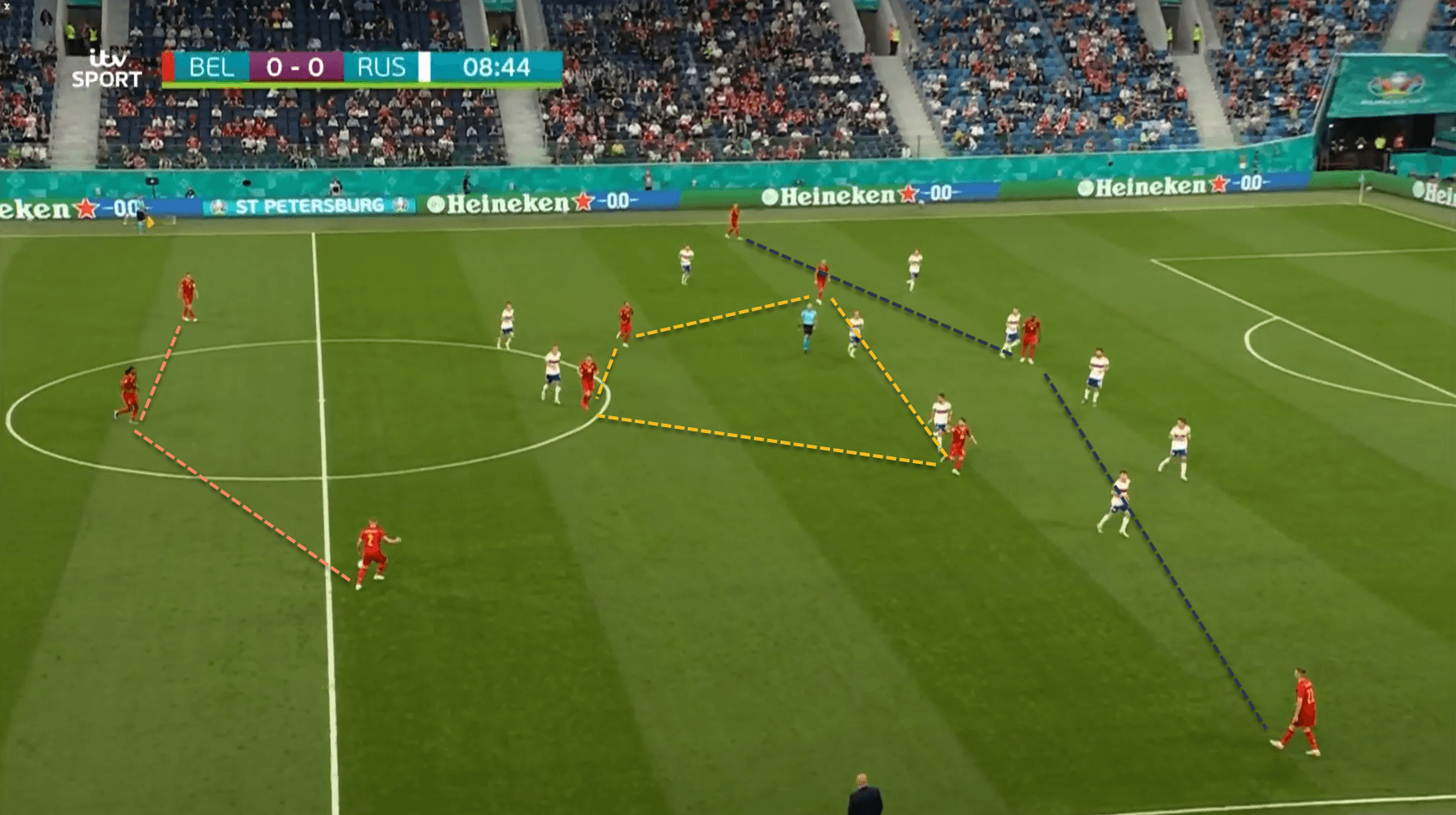 We can see Belgium’s setup in possession here – the back three is in place, followed by a box shape in midfield with Tielemans and Dendoncker from central midfield supported by the two playmakers in Mertens and Carrasco. Width is provided by Castagne and Hazard, the wing-backs, with Lukaku staying central and providing depth by looking to make runs in behind the Russian defence. His presence allows Mertens and Carrasco to drop into the wide half-spaces on either side of the Russian midfield pivot, as the centre-backs cannot step up due to Lukaku’s pace in behind.

Belgium were able to create numerical superiorities across the pitch through this setup, which allowed them to play the ball upfield easily. 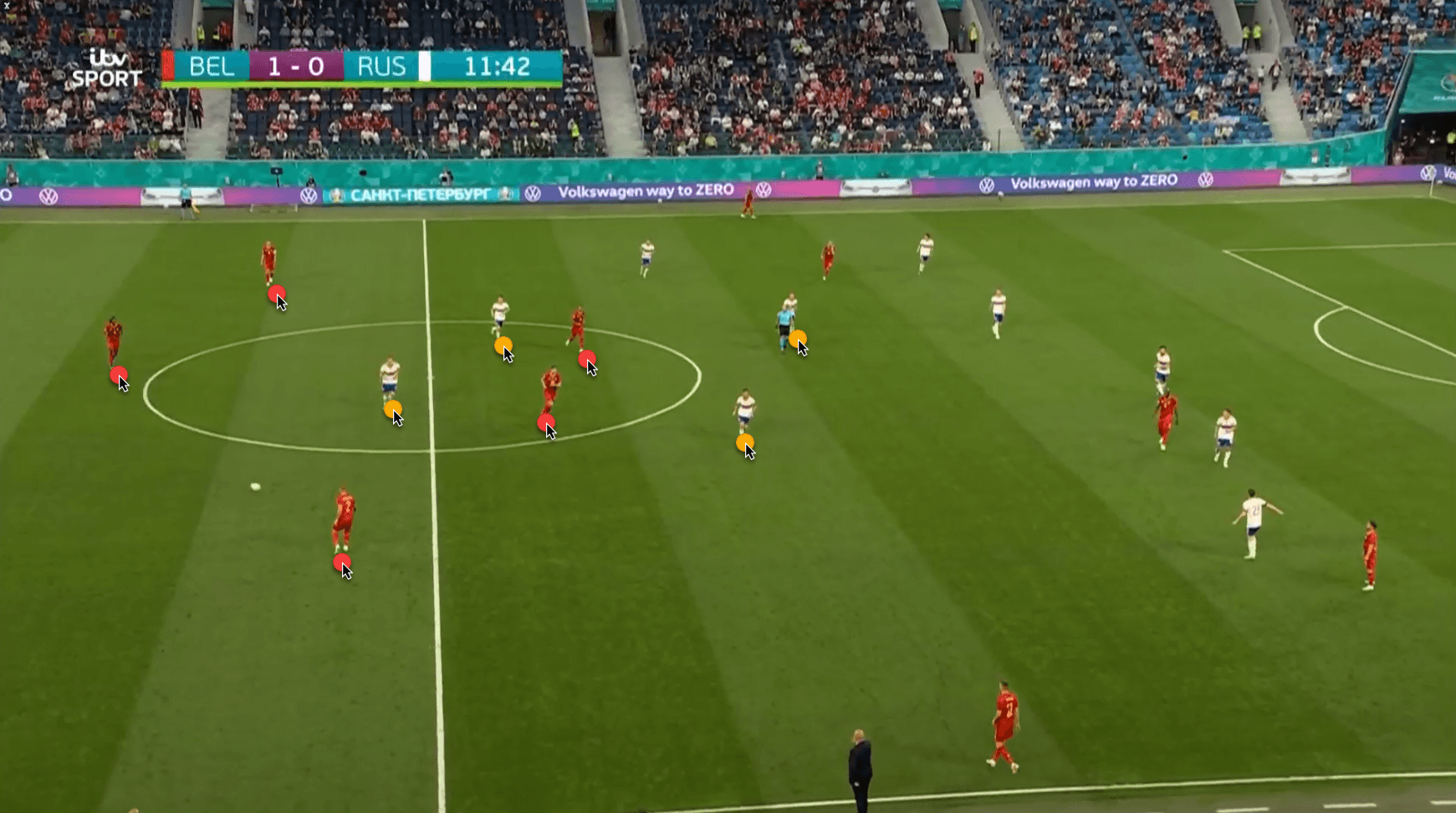 Belgium’s back three automatically creates a 3v2 against Dzyuba and Golovin, while if we include both sides’ central midfielders, this becomes a 5v4 in favour of the Red Devils – allowing Belgium to play the ball through the lines centrally quite easily.

Belgium are also able to create a 5v4 overload against the Russian defensive line through the wing-backs, whose wide positioning, along with Lukaku’s central and deep presence, allows the two inside forwards to come infield and receive possession in the half-spaces. 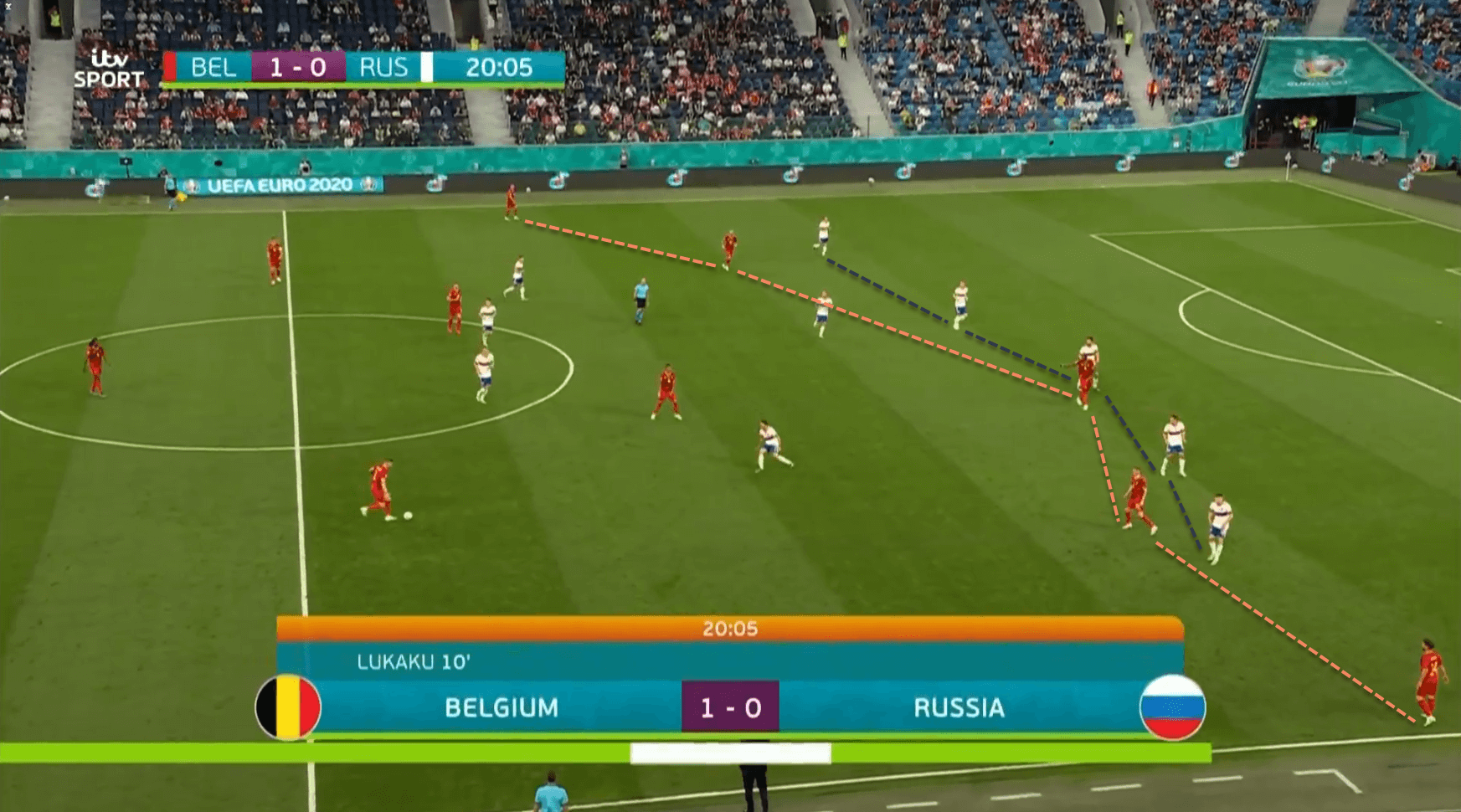 In this instance, it is Meunier who has stayed wide on the touchline on the right, with Castagne coming infield to take his place. Note how wide the Belgian attacking line is, automatically creating space out wide and thereby forcing the Russians to come out and concede space centrally.

Belgium’s use of the wide spaces played a big role in their ball progression in this match, through the use of wide triangles and diamonds. 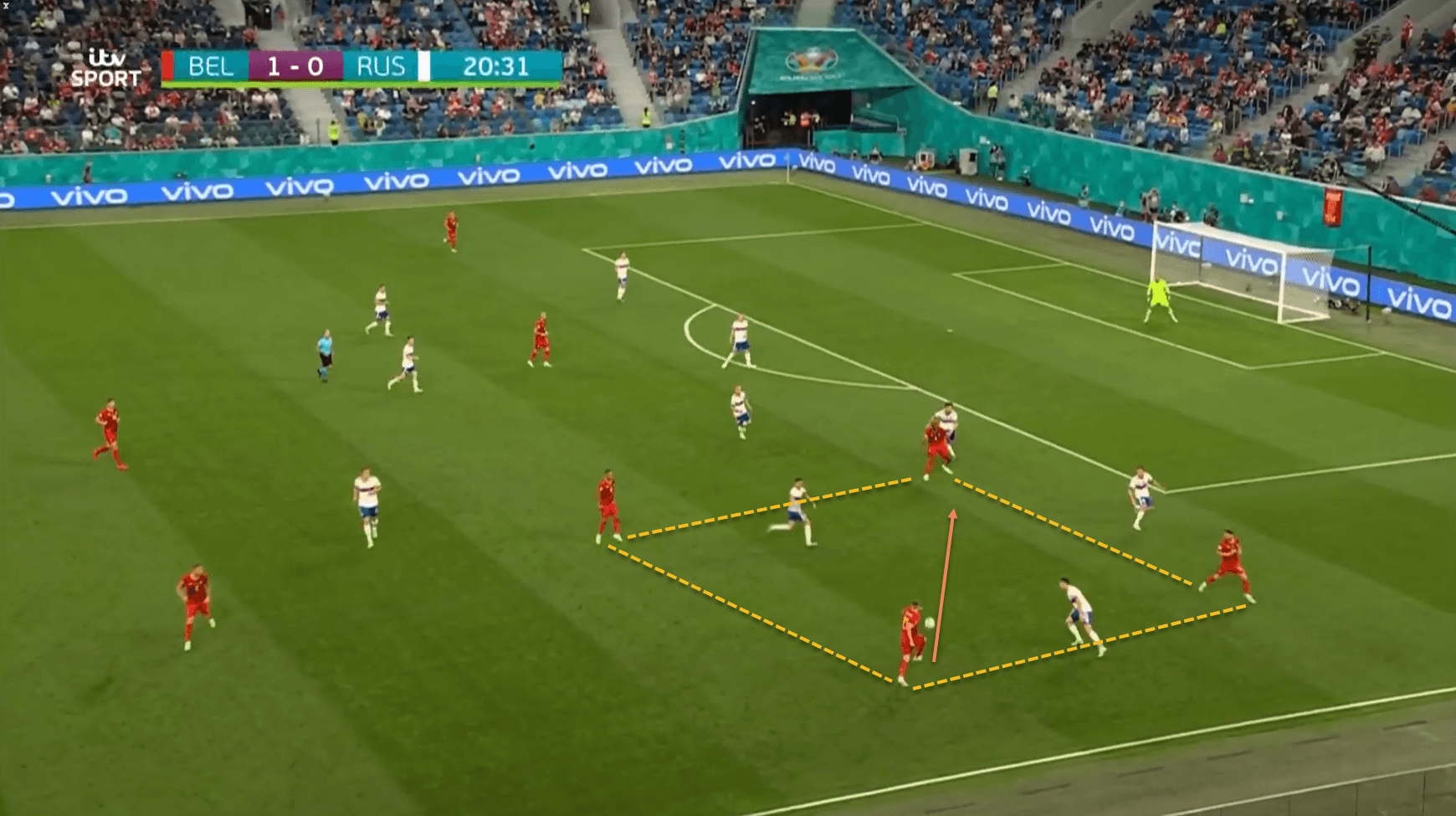 We can see one such situation here, as Lukaku, Castagne, Mertens and Tielemans form a diamond against three Russian players, which allows them to move the ball around quickly and into dangerous positions. 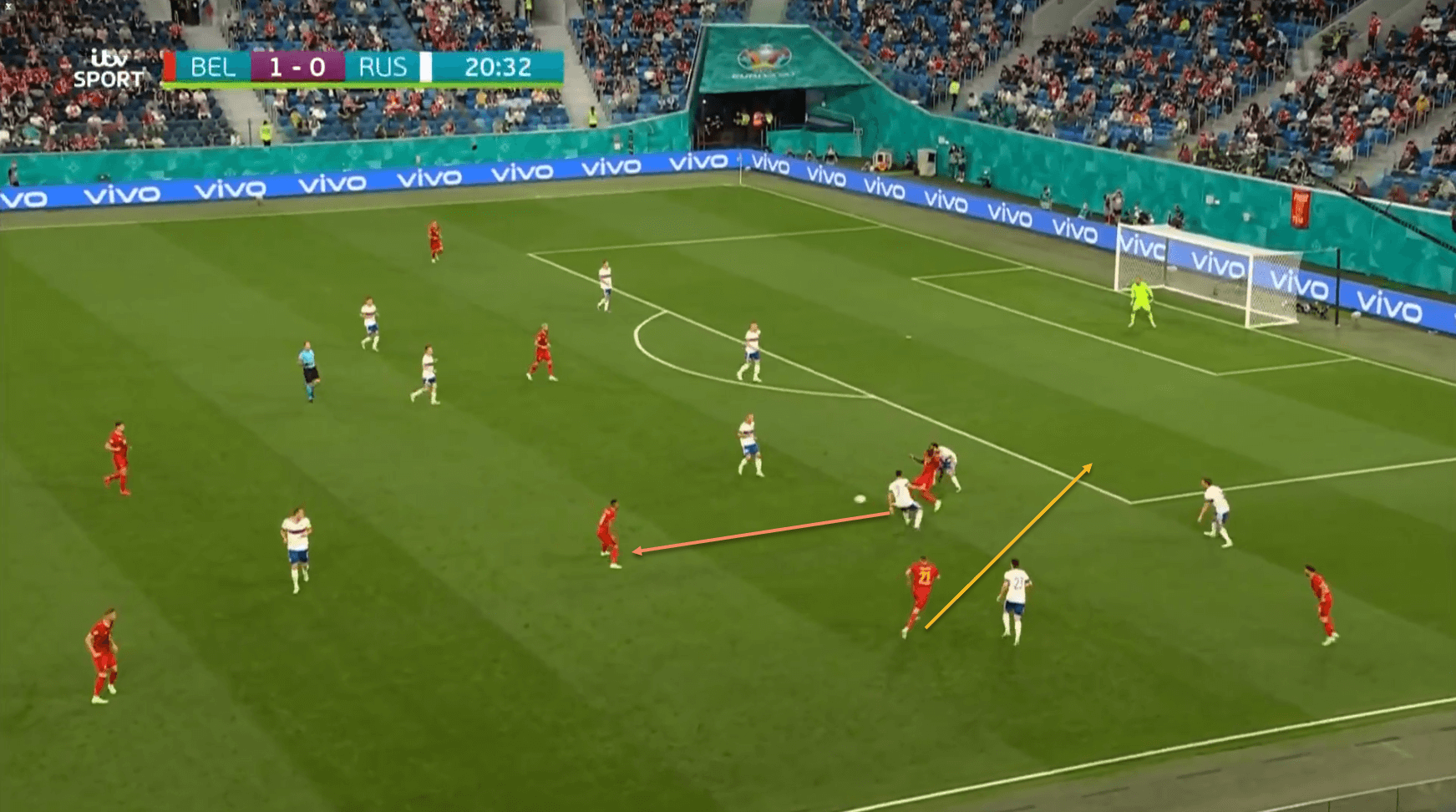 When the ball is played into Lukaku’s feet, he is able to play it back to Tielemans who is completely free, while Castagne is able to make a run into the space between the Russian full-back and centre-back as well. 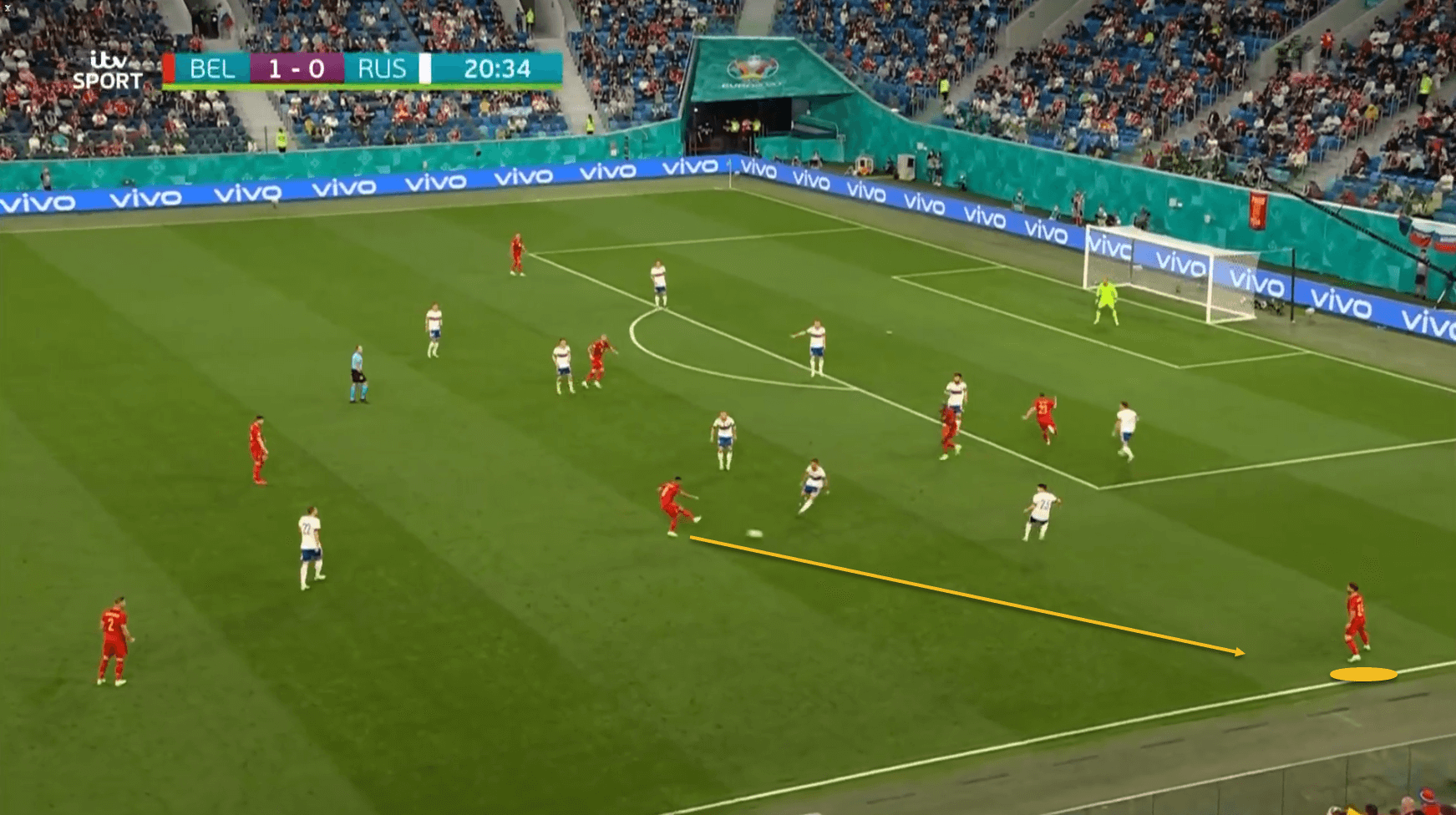 Even with the central spaces blocked off, Tielemans is able to find Mertens out wide with a simple pass – Belgium’s positioning made it possible for them to keep possession in this manner even if central passing options were cut off. 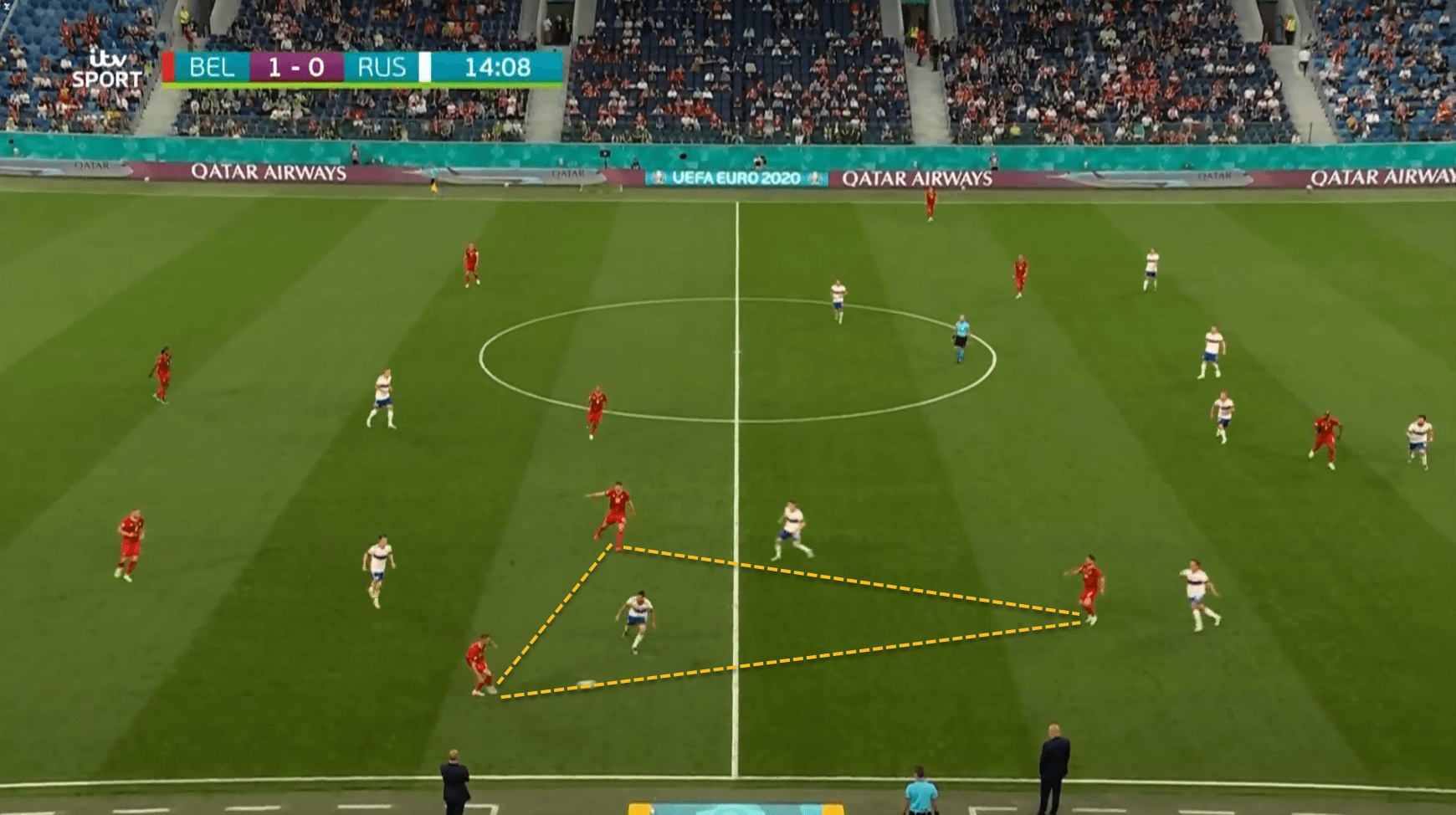 Another example of a wide triangle here allowing Belgium to progress the ball easily.

Russia’s disjointed shape, both in and out of possession

In contrast, Russia’s shape and structure was a lot more disjointed, which affected their play both in and out of possession. When Belgium had the ball, especially in deeper areas, the Russian press was extremely broken, making it very easy for the Belgians to play out from the back and progress centrally – there was a need for Russia to fall back into a compact block rather than try to press Belgium high up the pitch, especially in a half-hearted manner. 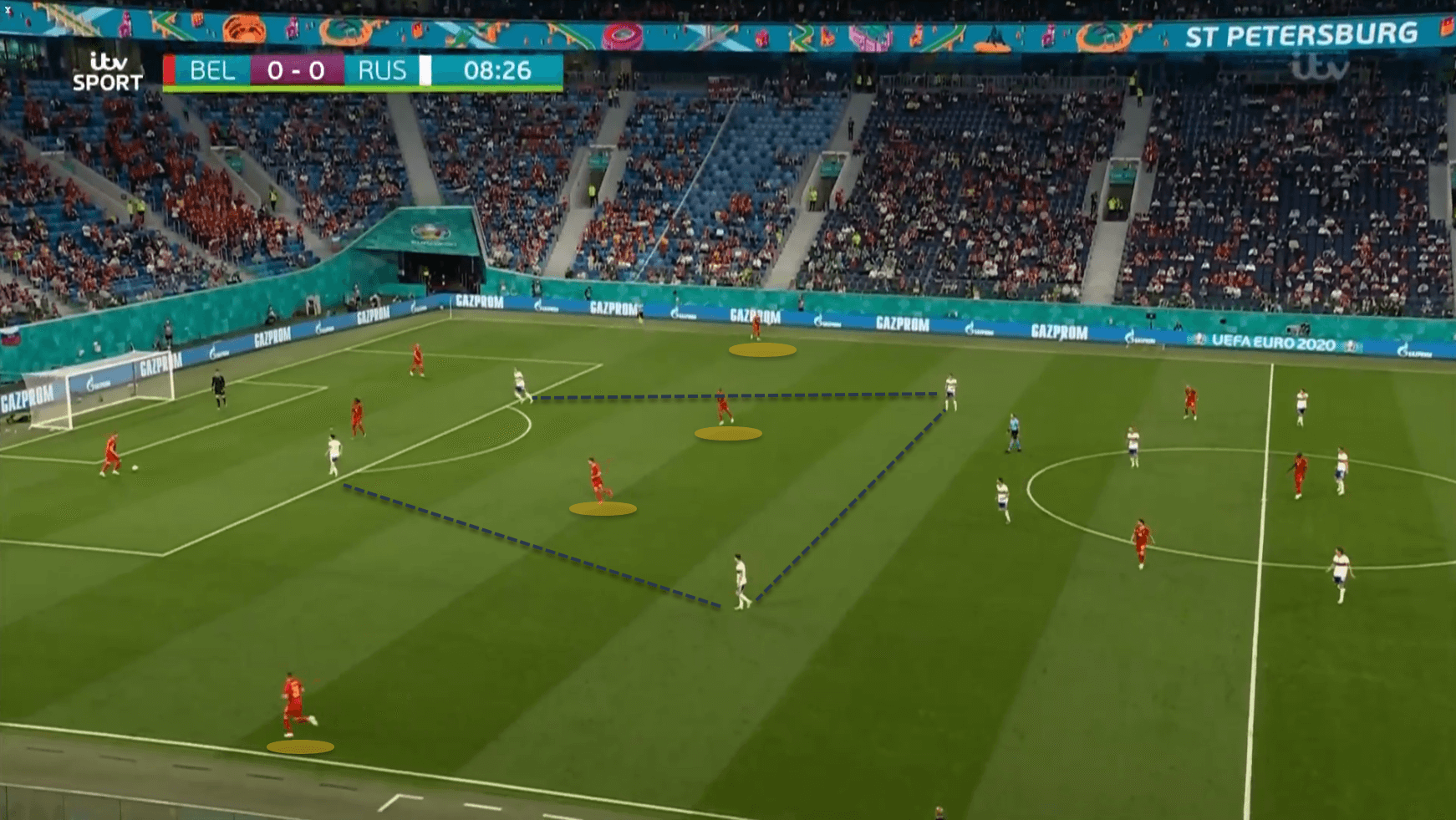 Russia’s front two is pressing high here – note the distance between them and the two wingers, while we can see the four Belgian players in that zone in acres of space. This gives Alderweireld multiple passing options – all of which allow for easy ball progression.

In possession, Russia usually went long to Dzuyba from the back, or attempted to play a pass down the line. Again, with Russia moving into a 4-2-4 shape, this meant that there was often not enough support for Dzyuba even if he won the ball in the air. 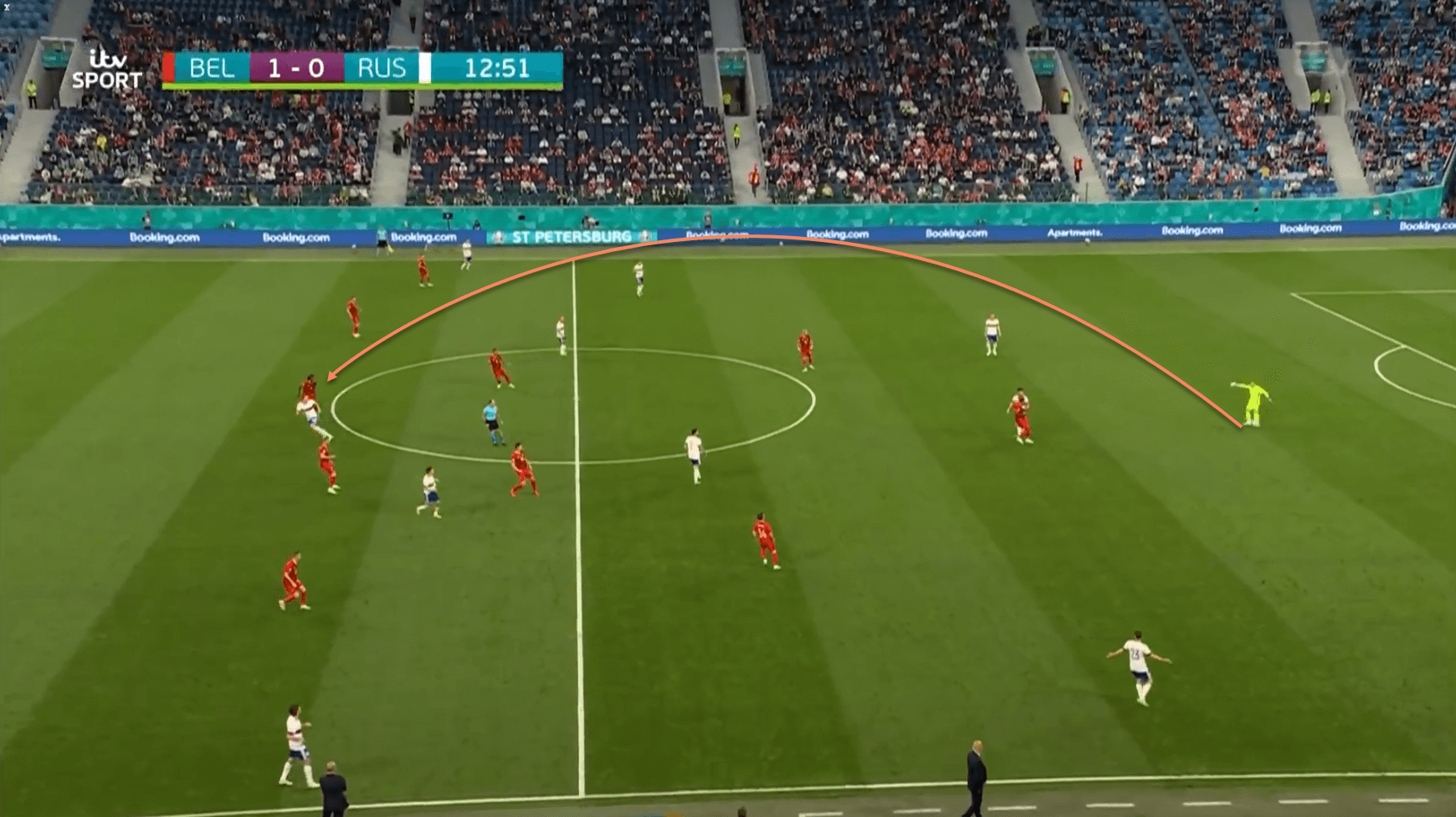 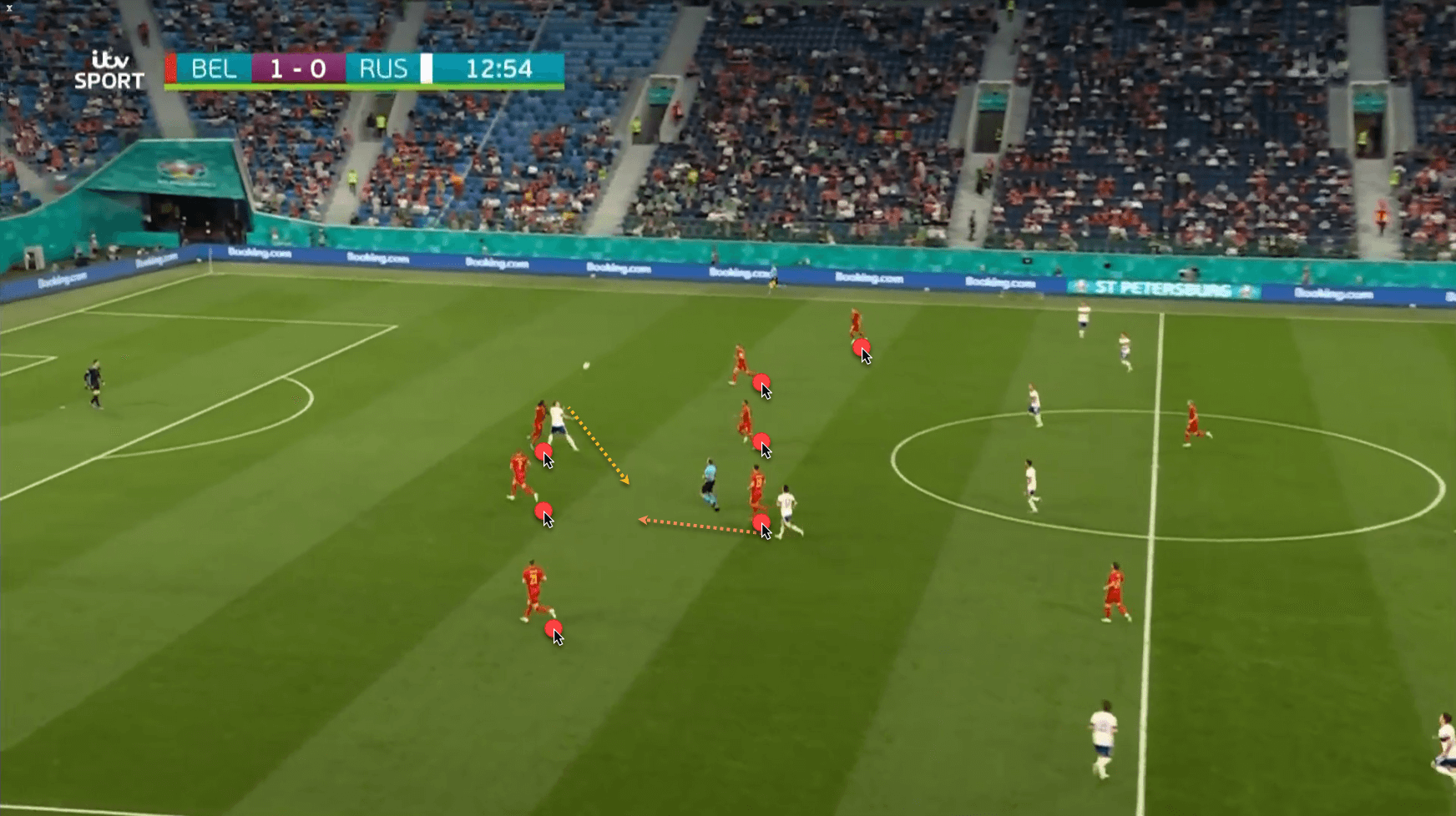 Anton Shunin goes long to Dzyuba here, and the second image shows just how isolated Dzyuba is, with only Golovin in support, while there are seven Belgian players ahead of the next line of Russian players. 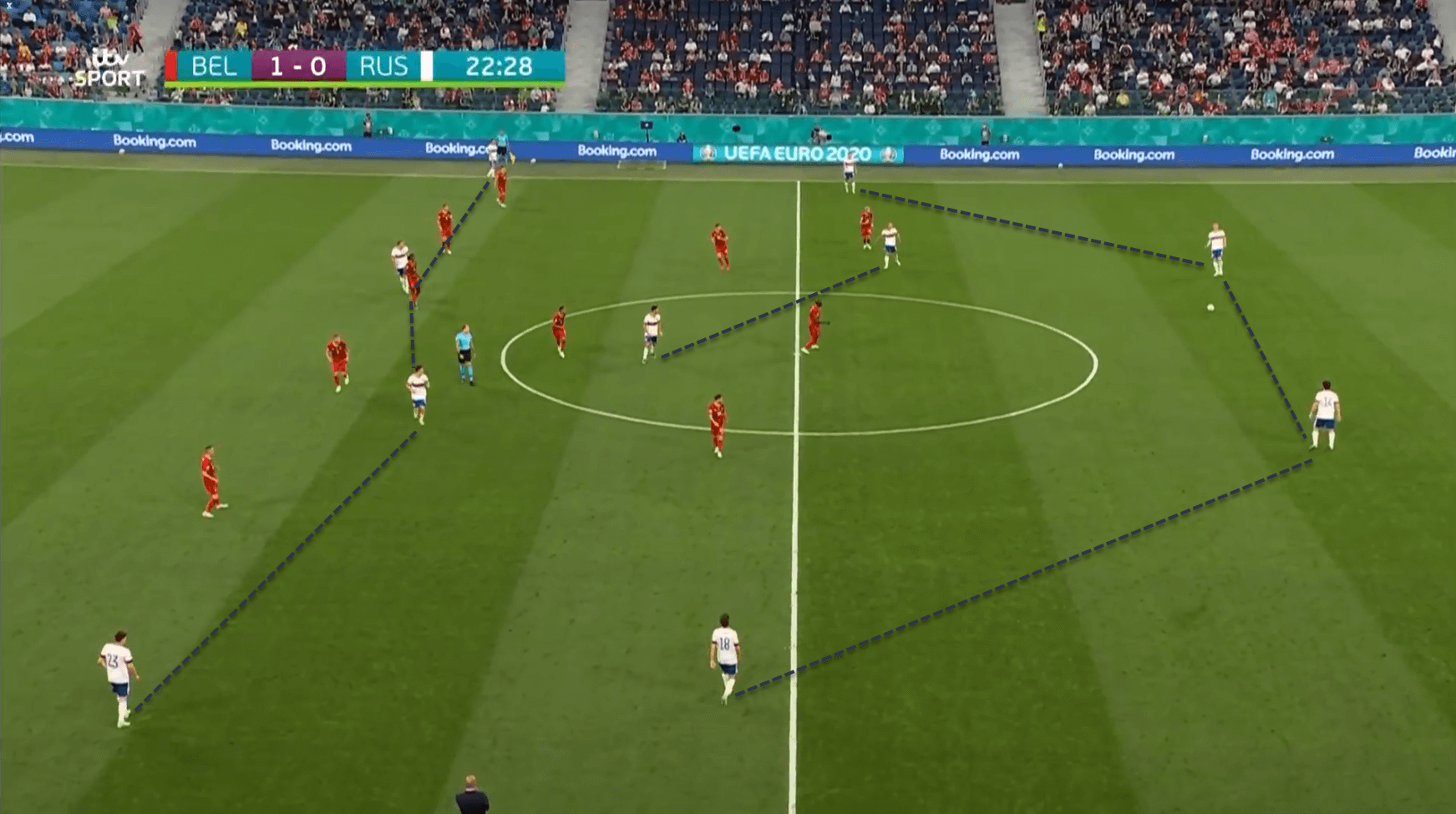 Russia did attempt to stretch play by holding the wingers wide, but Belgium’s back five ensured that they had a numerical advantage in this phase, while the Belgian’s central block of two central midfielders and two attacking midfielders also ensured that Russia were undermanned in that area of the pitch as well.

Belgium managed to get the win that they were expected to, but they also controlled the match to a large extent, restricting Russia to very few opportunities and managing to create quite a few chances. They are tipped to go quite far at this tournament, and with a pretty straightforward group stage, this could very well allow them to play themselves into form and therefore become quite a formidable prospect in the knockout stages.