Sadio Mané, Naby Keïta, Marcel Sabitzer, Dayot Upamecano, Kevin Kampl, Munas Dabbur and Takumi Minamino are just a few players who developed their skills at RB Salzburg and then moved on to join bigger clubs in Europe. Salzburg are already known for their development of young talents and made a name for themselves with it.

During the last summer break, Salzburg sold Xaver Schlager, Hannes Wolf and Diadie Samassékou – three of their most important central midfielders. Due to that, it was clear ahead of this season that we would get to see new players in the centre of the park. However, almost no one thought that the 19-years-old Mohamed Camara would get much time on the pitch, but the American coach Jesse Marsch gave him a chance and he took it. The young midfielder made six appearances for the second team of Salzburg this season, FC Liefering, and five for RB Salzburg. So, he’s just one step ahead of becoming a regular part of the senior team.

In this tactical analysis in form of a scout report, we’ll look at his abilities and how he fits into RB Salzburg’s tactics.

However, no matter if he was the lone man in front of the back four or the back three, or if he was part of a double pivot, he was always the man who had the task to support the defenders during the first stage of the build-up and additionally win back balls in front of the last line of the defence. We’ll look at these aspects more closely later on in this analysis.

Considering this, Camara is always positioned deep and near the defenders to provide them with a passing option in the centre. We often see situations in which defensive midfielders drop deep between the centre-backs and position themselves on the same height as their teammates. Sergio Busquets is probably the most popular for that kind of movement. Anyways, you rarely see Camara doing this as he always stays in front of the defence. In the example below, Marsch lined his team up in a 3-1-4-2 formation against WSG Tirol. The 19-year-old was the only defensive midfielder and due to that, together with the back three, he created a kind of a diamond to easily circulate the ball within the opening phase of the build-up. 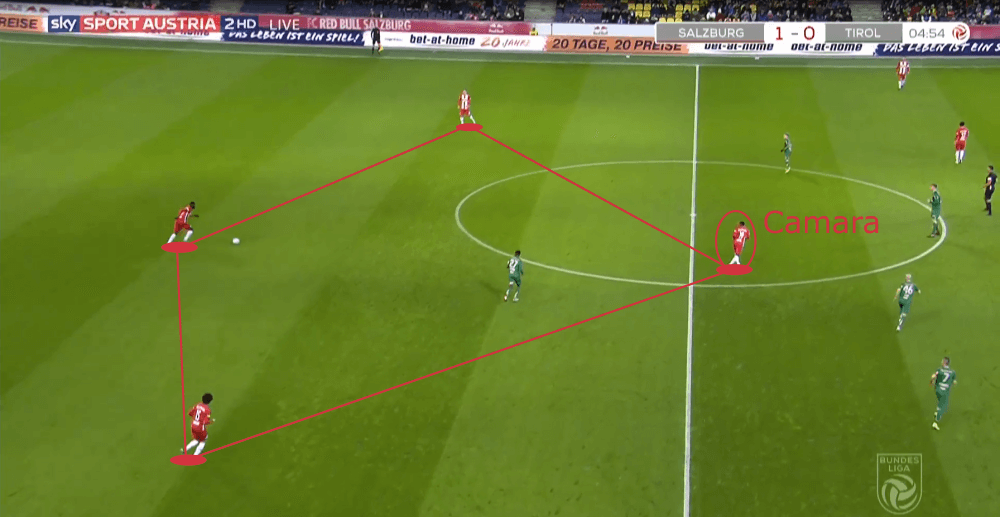 However, when Salzburg used a system with two defensive midfielders, as you can see in the shot below, Camara was still always positioned in front of the back four. In this match, they used a 4-4-2 with Camara and Zlatko Junuzović in the central midfield. Since the Austrian midfielder is more offensive than Camara, we either saw them both in front of the back four (as you can see in the example below) or Junuzović positioned himself in a higher line while Camara stayed deep and helped the two centre-backs organise the build-up. 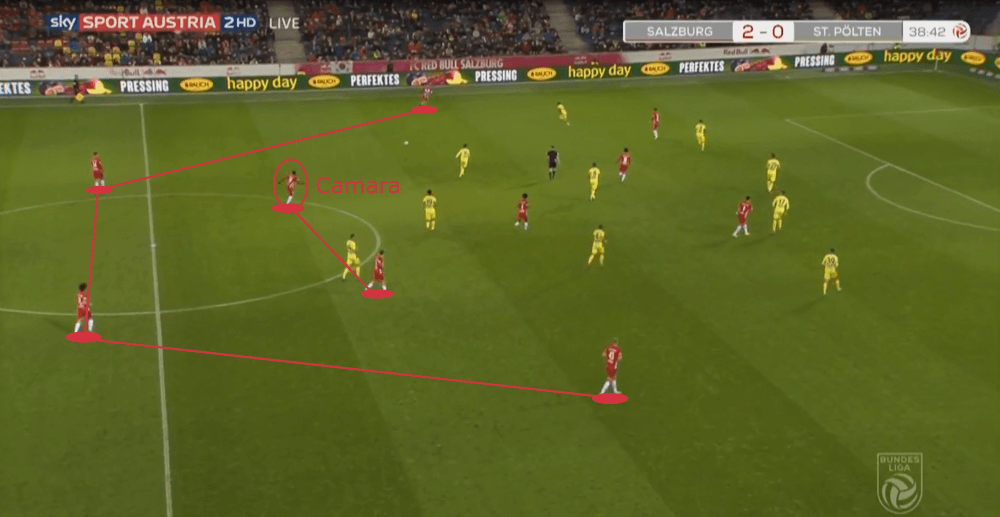 The 19-year-old has everything that you expect from a defensive midfield player nowadays as he is strong on the ball, has a good feeling for space and a decent vision while he is also strong in winning back the ball. Just the fact that Marsch lined him in several matches up as the lone man in front of the defence shows that the American coach knows that he has the abilities to organise and manage the build-up.

His teammates know that they can pass the ball to him in almost every situation as he knows how to solve them. Since Salzburg is the most dominant team in the Austrian Bundesliga and the opponents rarely put pressure on them higher up the pitch, Camara’s task is often to know when he has to quickly shift the side to help his teammates by finding new and free spaces. This can be seen in the image below as the opposition tries to press in at Salzburg a bit higher up the pitch and you have to admit that they do it well.

If Camara would pass the ball to André Ramalho on the right side, Tirol could perfectly create a numerical equality and press in at Salzburg’s defender. However, Camara notices that and turns around to switch the side. The wing-back on the opposing side, Andreas Ulmer, now has a lot of space and can go forward due to Camara’s great vision and understanding of the game. 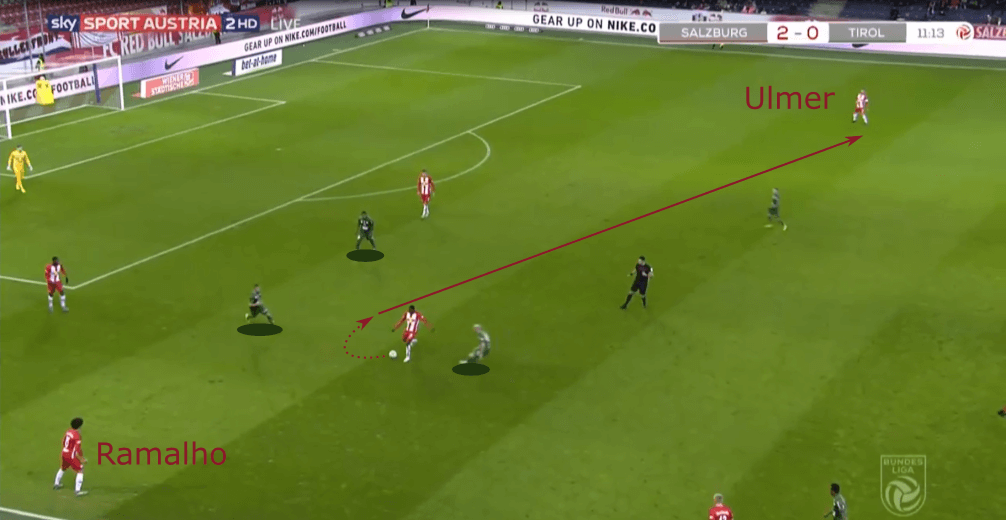 We can see Camara playing such long balls from one wing to the other quite often as this is a good way to find a way through compact opponents which Salzburg often face. Marsch wants his 19-year-old midfielder to do so especially when his team plays with wing-backs since they are normally positioned really wide and with such long passes you can perfectly exploit the whole width of the pitch.

In the shot below, Camara plays a diagonal pass to find the right wing-back, Rasmus Kristensen, in the match against Tirol. Within the opening minutes of this particular game, we saw exactly this type of pass several times as Camara can perfectly play such a long ball when he has the time and space while Kristensen has the pace to start from a deeper position and receive that pass. Due to that, it’s quite likely that Marsch told these two players that he would want to see this pattern numerous times in this match. 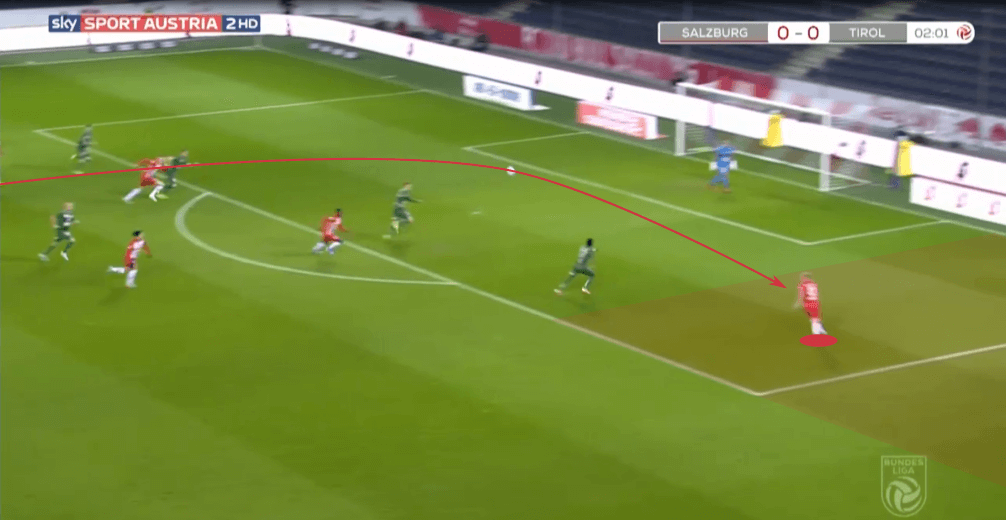 Even though vision is a very important mental skill for a player who plays in the central midfield, there is a physical aspect which can also help a player massively: stamina and physical strength respectively. Even though Camara is just 19 years old and 5’9”, he has quite a lot of physical strength due to his muscular physique.

Furthermore, he knows how to use his body to protect the ball when the opponents try to press in at him as it can be seen in the example below. Camara then either tries to get a freekick or uses his vision to find a teammate in a better position.

Since Camara is always the deepest positioned midfielder, it’s logical that the other midfielders, as well as the strikers, are positioned in higher lines and want to receive line-breaking vertical passes from the young midfielder.

We’ll look at his ability to play penetrating through passes in the next paragraph of this analysis, but he’s also able to play vertical passes to find teammates between the lines of the opposition. This can be seen in the image below as he uses his passing skills as well as his vision to find a teammate between the defensive lines of the opposition. 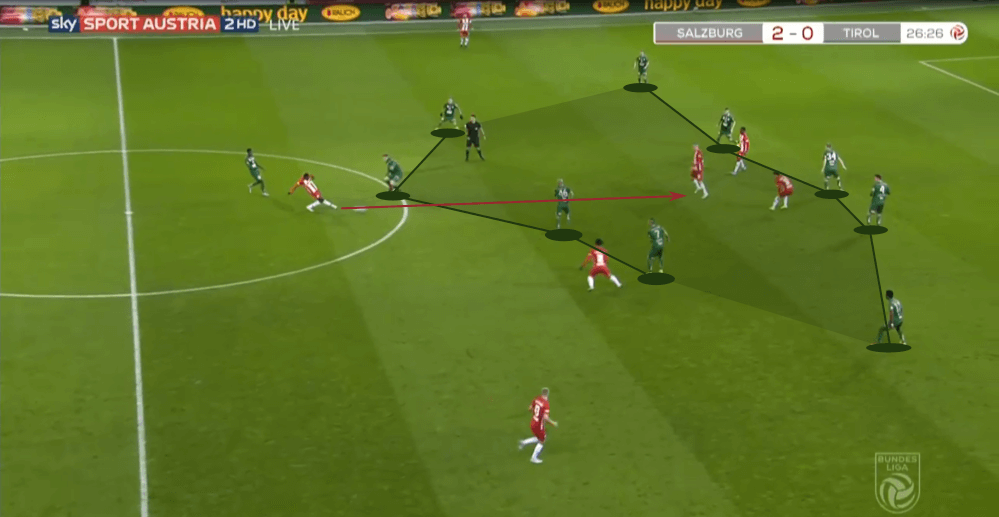 So, we now saw that Camara is a central player for RB Salzburg during their build-up as he plays 62.5 passes and five long passes on average. Additionally, the value that 62.5% of his long passes find their target is quite impressing.

However, since the opponents of Marsch’s team often sit back deep and defend in a low block, the whole team of Salzburg is positioned high and deep in the half of the opposition. Logically, in these situations, even the defensive midfielder from Mali is positioned higher up the pitch and shouldn’t just manage the build-up by playing horizontal passes and finding teammates between the lines with vertical passes, but also play penetrating passes behind the last line of the opposing defence. He plays on average 2.71 through passes per match, which is not an outstanding value, but shows that the 19-year-old is willing to try and help create goalscoring chances.

In these situations, he once more makes use of his great vision and ability to play well-timed passes. Besides, since Marsch wants to see his team permanently try to get behind the last line of the opposition’s defence, it’s no surprise that they also often operate with long balls behind the defence. In the example below, Camara detects that his teammate Masaya Okugawa is completely free due to an intelligent movement of Takumi Minamino and finds him with a long through pass. The Japanese then delivers a low cross which Erling Haaland just has to tap in to score the 2-0 against Tirol.

However, the young defensive midfielder can also sometimes be found even higher up the pitch. Especially after Salzburg’s counter-pressing. Then, we once more see how Camara knows that his coach wants him to play the pass into the space behind the defence of the opposition. In the example below, we can see such a well-timed through pass. 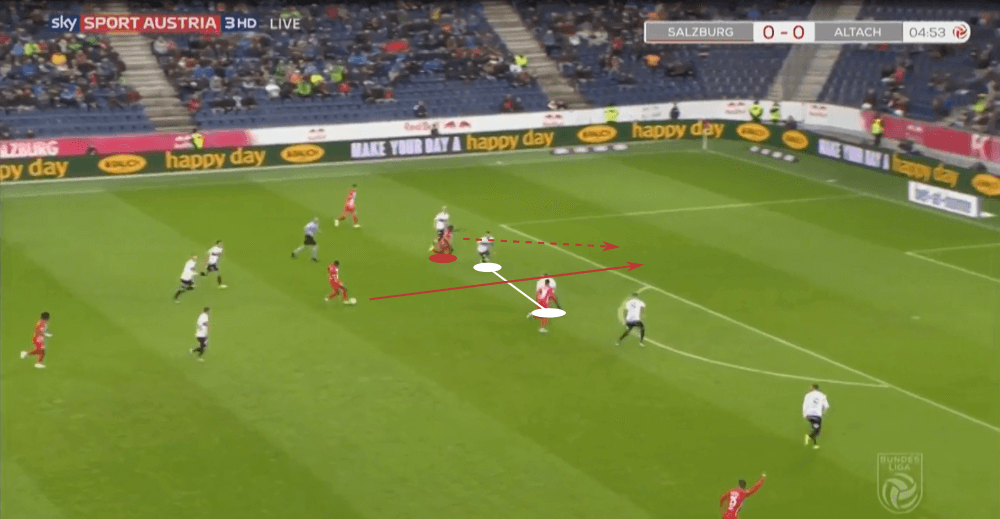 In light of this, Camara is already able to organise the build-up of Salzburg and also likes to play through passes as is typical for Salzburg since they want to get in front of the goal as soon as possible by using vertical passes. Furthermore, they have the offensive players who have the speed and pace to beat the opposing defenders in the race for the ball.

Anyways, Marsch’s team is also famous for their pressing and especially their counter-pressing. Salzburg have 64.01% possession per 90 minutes on average in this season’s Austrian Bundesliga games. This means that they dominate the opposition and additionally use their counter-pressing to give them not even the chance to either start a counter-attack or have a structured build-up. Logically, the offensive players are especially important to execute the counter-pressing well. However, the defensive players, as well as Camara, need to push forward to keep the vertical compactness alive. As already mentioned above in this analysis, in such situations, Camara is positioned high up the pitch as he tries to support his teammates by winning back the ball.

The 19-year-old wins 67.4% of his defensive duels on average and 55.6% of his recoveries are made in the opposition’s half. Especially the second value proves that one of his central tasks in Salzburg’s tactics is clearly the supporting of the offensive players during the counter-press. Of course, he is also the man in front of the back three and back four respectively who should win balls in the area in front of the defence, but since Salzburg almost always execute their counter-pressing, his central task is to win defensive duels high up the pitch as we can see in the two examples below. 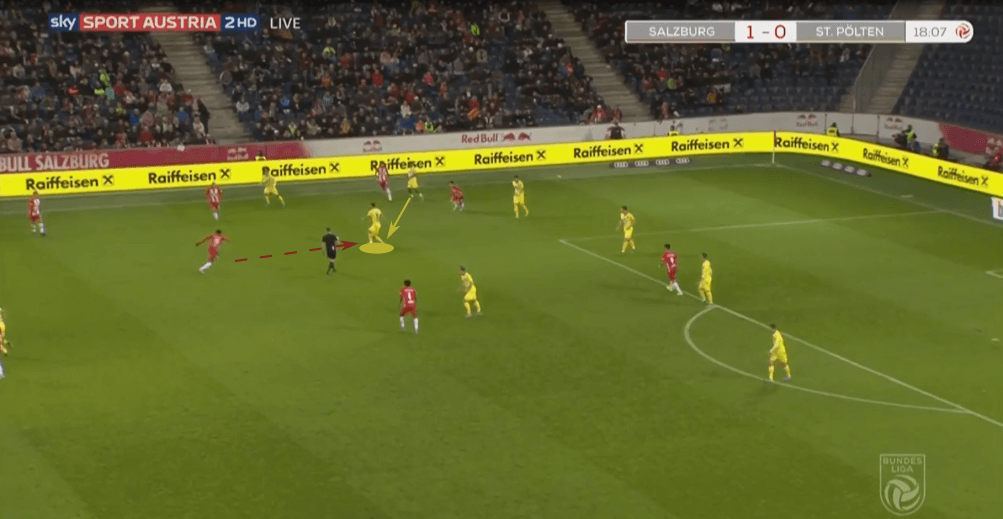 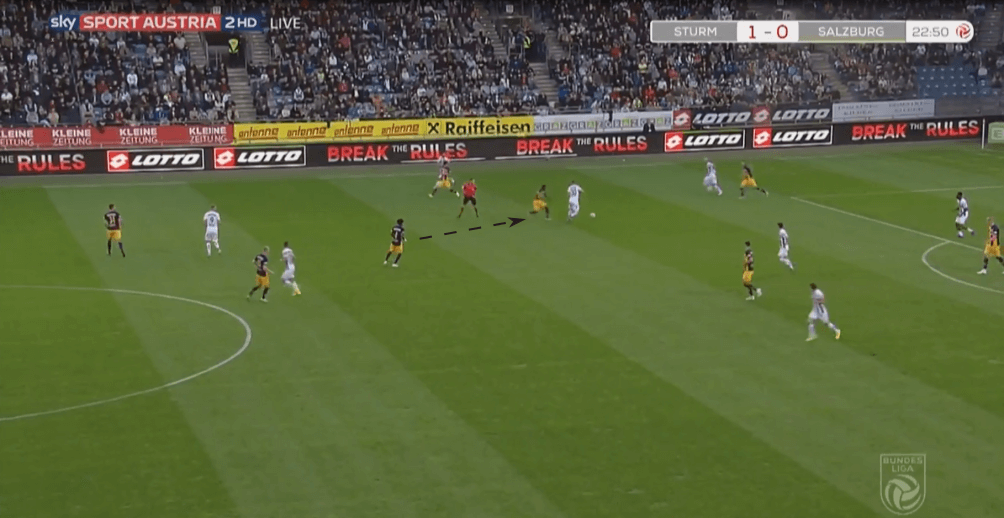 We now saw Camara’s style of play and role in Salzburg’s system and tactics. A very important aspect to mention is that he only played in the Austrian Bundesliga this season and never in the UEFA Champions League. Since against bigger opponents Salzburg don’t have that much possession and aren’t that dominant, his role would clearly be different. The young defensive midfielder already showed off his incredible abilities, but in some situations, he seems to be a bit sloppy when it comes to first touches and passes but that’s typical for a 19-year-old.

He showed some decent performances in his appearances in the Austrian Bundesliga and due to that it’s quite likely that he’ll also play in some games in 2020. But it’s hard to predict if he’ll become a regular starter as Salzburg will buy and sell quite a lot players in the summer as usual. It would be interesting to watch him playing against bigger teams in the UEFA Champions League or UEFA Europa League. However, the young man from Mali has a lot of potential, what he already proved, and we’ll watch his performances and development in the upcoming year closely.