There was some surprise amongst the footballing world when the Napoli president Aurelio De Laurentis chose the day after a 4-0 win in the Champions League to sack their coach Carlo Ancelotti. This win saw the Italian side qualify for the Champions League knockout stages but it was not enough to save the job of the coach who has already won the competition on three separate occasions. The combination of indifferent league form and significant unrest in the dressing room saw Ancelotti relieved of his position with the former Milan coach Gennaro Gattuso appointed in his place.

This match, away to Sassuolo, represented an opportunity for us to get a look at this Napoli side under their new coach and new tactics. Coaching changes midseason are always interesting as we see a new coach trying to implement their playing philosophy on a side that was built for someone else. Indeed, a large part of this Napoli side was at the club under Maurizio Sarri so they have experienced this change in style once already. Now they would have to do it all again.

Sassuolo are gaining a reputation as a side that plays an interesting style of football with an emphasis on positional play as they attack through the thirds. Under coach Roberto De Zerbi they have recruited well, often from within Italy, and created a young squad with a great deal of attacking intent.

This tactical analysis will show how Napoli came away with a difficult 2-1 Serie A win despite being outplayed for large periods of the match. 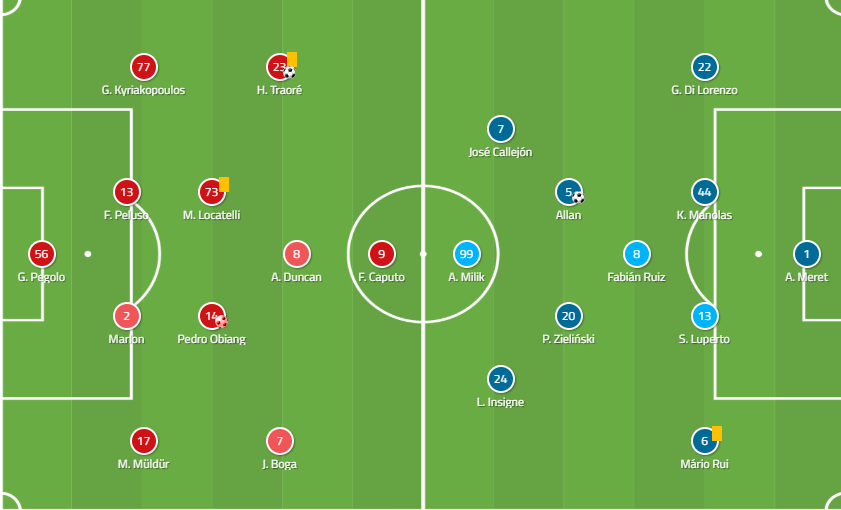 Similar tactical structures from each team but with important differences, as this analysis will show. Under De Zerbi Sassuolo prefer to use what looks like a 4-4-1-1 on paper. As the game progresses, however, you will quickly see that the wide midfielders, Jeremie Boga and Hamed Traore are not only far closer to the striker on terms of depth but they move inside to play in the half-spaces just off of the lone striker. The former Milan midfielder Manuel Locatelli controls the tempo of the match from the centre of the midfield while Alfred Duncan and Pedro Obiang cover ground and link the attacking and defensive units.

Gattuso appears to be going with the regular 4-3-3 with Napoli and as ever the keys in the attacking phase are Lorenzo Insigne, playing from the left, and Jose Callejon, from the right. Neither of those attacking players behaves as regular wingers and instead, they look to act as playmakers from the wide areas. In the midfield Napoli have a lot of talent with the Spanish international Fabian Ruiz, in particular, impressing since his transfer from Real Betis. Allan and Piotr Zielinski also offer different strengths to the midfield unit.

As always when analysing a match, the fact I like to refer to is the final xG score for the two sides. The above graphic shows that Napoli came out on top in terms of xG by 1.8 to 1.18. It is important that we consider the game state in these circumstances though and as we can clearly see that up until the 75th minute of the match Sassuolo were controlling the match. In the final 15 minutes, and indeed in time added on, we saw Napoli take control of the match as the hosts tired. 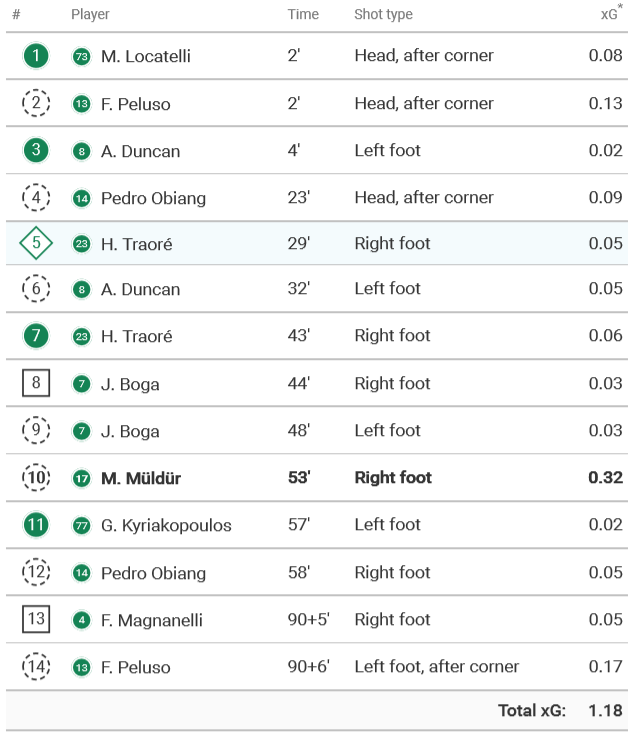 As you can see from the above graphic, the 1.18 xG for Sassuolo came from 14 shots at goal. Whilst Sassuolo are exciting and enterprising in their attacking play and with the way that they move the ball through the thirds of the pitch, they still struggle to create clear cut chances. Their goal, scored by Hamed Traore in the 29th minute, was only ‘worth’ 0.05xG as he connected with an angled pass from Locatelli to score at the back post. 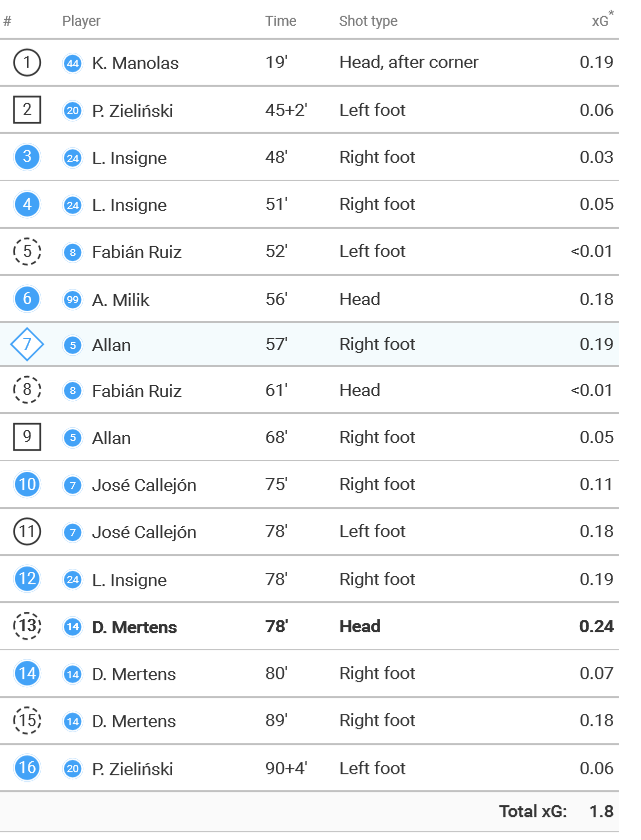 Napoli recorded 1.8 xG from 16 shots at goal but again their ability to create clear cut chances from favourable positions was lacking. Allan scored in the 57th minute from a chance with 0.19 xG. 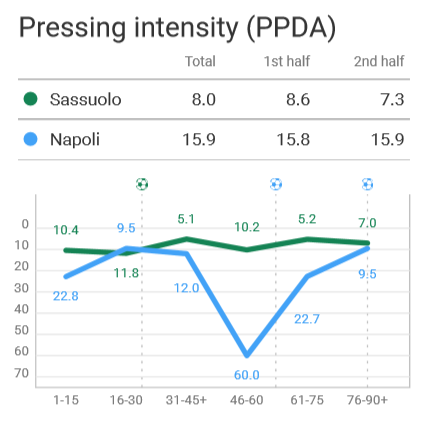 I also like to look at the passes per defensive action (PPDA) scores from a match to understand how each team played out of possession. The lower the PPDA score the more a side pressed without the ball. As we can see Sassuolo averaged eight passes allowed per defensive action and pressed effectively throughout. Napoli, on the other hand, were passive out of possession and preferred to defend from a deep and compact block.

When in possession of the ball Sassuolo display a clear preference for building up and attacking through the thirds of the pitch. In this match, we saw this clearly as Napoli struggled to prevent Sassuolo from advancing the ball into the final third. This was partly, as discussed above, because there was a lack of effective pressure on the ball from the away side. 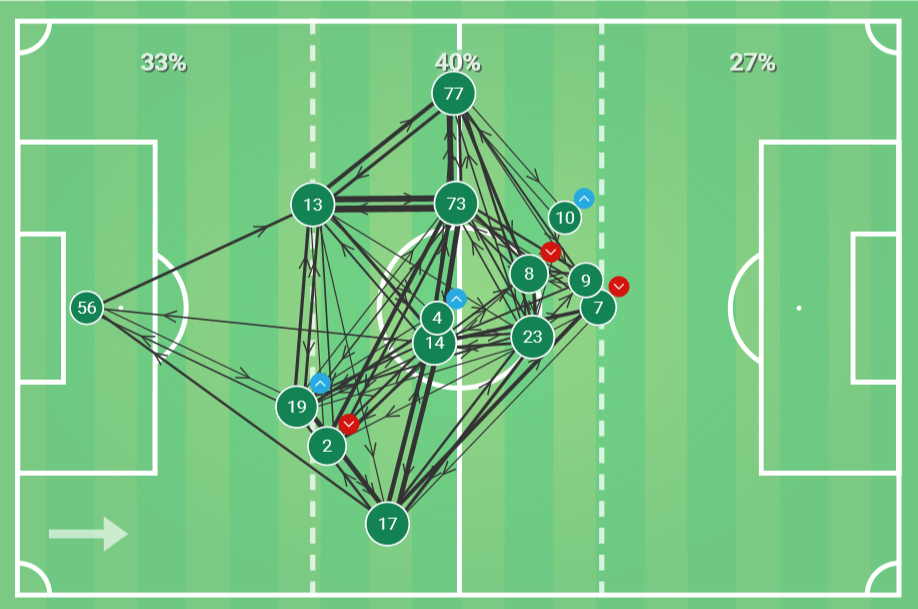 The pass map for Sassuolo in the match makes for interesting viewing and we can see the importance of the likes of Locatelli (73) and Obiang (14) at the base of the midfield as well as Hamed Traore (23) who very much took up central positions. The width in possession came from the full-backs who got forward consistently in order to allow the ball to be played out into wide areas. The positioning of Traore and Boga inside overloaded Napoli in these areas and created space in the wide spaces that could be exploited easily by the full-backs.

Above we see an example of Sassuolo playing forward in possession of the ball. The first pass bypasses the two highest Napoli players and before the ball near player can react to apply pressure to the ball it is again shifted forward to a player in space ahead of the Napoli midfield line. Once again the ball is moved forward first time and before the Napoli midfield players can close down the ball and this time it moves beyond the midfield to where Duncan can receive possession inside the Napoli half.

Three quick vertical passes have bypassed six Napoli players and created an attacking opportunity for the home side. They also created a situation with positional superiority that they could use as an attacking platform to create a goalscoring opportunity as they move towards the final third.

This time we see the rotations and movements used by Sassuolo to access space in the wide areas of the field. With the ball in the central area of the Napoli half, and again with no pressure on the ball carrier from Napoli, we see Boga make a movement from the high right position into the half-space. This movement effectively creates space in the wide-area that Sassuolo are able to use by moving the right-back into a more advanced position.

For the most part in this match, we saw Napoli choose to move their full-backs into narrow areas. This prevented Sassuolo from being able to play through the middle but created space over and over again from the Sassuolo full-backs. Especially as the Napoli wide forwards failed to defend effectively.

We have already discussed that Sassuolo were active out of possession as they looked to press Napoli to prevent them from comfortably playing into advanced areas. Simply saying that a side presses the ball though does not offer a full picture. Instead, we have to consider where and when they press to understand the pressing triggers that De Zerbi likes to use. The most evident of these triggers to press came when Napoli attempted to move the ball out to their full-backs in the possession phase.

We see this above as Napoli shift the ball out to the right-back areas. As soon as that pass is made the right attacker for Sassuolo, Traore would aggressively press and close down on the man receiving the ball. This alone, however, would not be enough without active work from the rest of the Sassuolo team away from the ball. You can see that every Napoli player who offered a genuine chance to progress the ball was covered in a man to man style.

These actions out of possession meant that Napoli spent a large period of the match unable to comfortably progress the ball forward into the Sassuolo half. They were made to work for every yard that they were able to progress into.

A similar situation here as the ball is played out into the wide area to the right-back for Napoli. This pass triggers a press and then the options for the man in possession are somewhat limited. There is a vertical run from the right-sided attacker, Callejon, but he is being tracked by the Sassuolo left-back. The three Napoli midfielders are all relatively close to the ball but they are positioned poorly with no player moving into an advanced area, This makes it easy for the Sassuolo midfield to cut off passing lanes.

Napoli improve as the game goes on

We have already seen above that Napoli struggled to find space in their attacking phase in order to play into advanced areas. They were slow in their attempts to progress the ball and with the pressing of Sassuolo, there were real problems for the away side for the first hour at least.

We see an example of this above with Napoli in possession of the ball just inside their own half. No player in an advanced area for the away side made an attempt to dismark from their direct opponent. In other words, they made no movements to separate themselves from the Sassuolo players who were marking then closely in a man to man orientation.

The highlighted space is the kind of free area that Napoli should have been looking to move attacking players into. Any of the four closest Napoli players could move into that space and dominate the area. They could then receive behind the Sassuolo midfield and create dangerous opportunities from that area.

As the match progressed we saw Gattuso allow his midfield more freedom to join the attacking line and produce problems for the Sassuolo defence. The example above is taken from the movement that led to the Napoli goal that brought them level. Allan, typically a defensive midfielder, makes a run off of the blind side of the Sassuolo midfielder Locatelli. As he moves beyond the Sassuolo midfield the pass could be made to overload one of the two central defenders and Allan is able to find the space to get a shot away on goal.

Gradually Napoli started to find spaces in the final third as the game state shifted in their favour.

Napoli can count themselves fortunate to come away from this match with three points. There is a definite sense that the club has built a squad that is designed for a more expansive style of play and this will not necessarily suit the kind of game that Gattuso will look to play.

Sassuolo pressed and attacked impressively but as is so often the case they ran out of steam before the end of the game. The home side will take heart from the ease with which they were able to cut through the Napoli defence in the early stages but in order to challenge for the European places, they will have to become more clinical when creating and taking chances.