Leicester City took on Liverpool in a Boxing Day top of the table clash, in a game many thought would be a close affair that could open up this so far routine title race in the Premier League. Ultimately, it was another showcase of a dominant Liverpool side, who limited Leicester to just 0.18 xG in the game. In this tactical analysis, we will look at how Liverpool’s in possession structure allowed them to attack effectively, and how it also allowed them to limit Leicester’s counter-attacking ability through counter-pressing.

Leicester lined up in a 4-1-4-1, with wingers James Maddison and Harvey Barnes forced to stay slightly narrower throughout the game. Liverpool meanwhile employed their usual 4-3-3, but their formation for most of the game resembled more of a 4-2-3-1, with Jordan Henderson and Gini Wijnaldum sat deeper to prevent counter-attacks, as we will discuss. 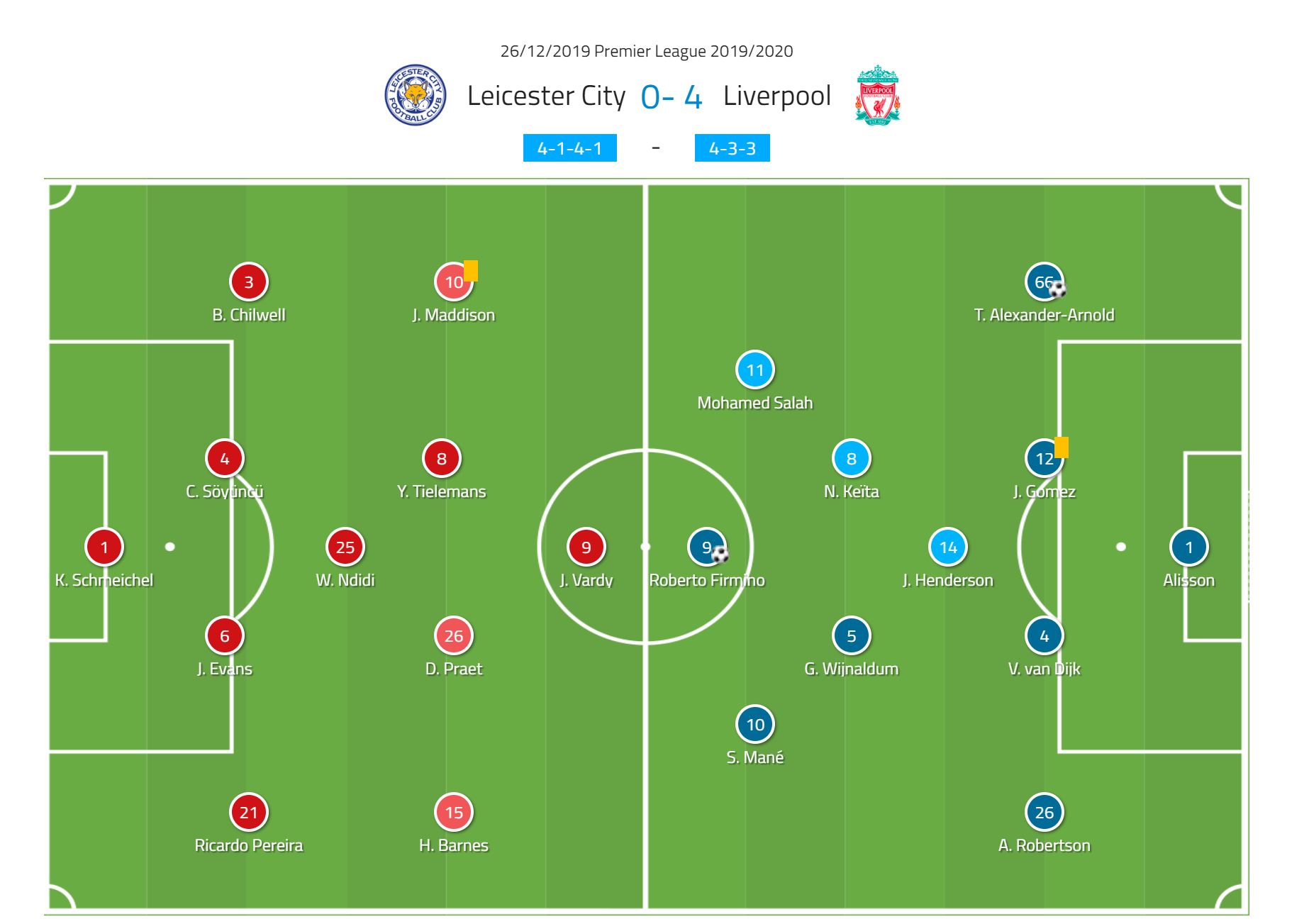 After some early struggles against Liverpool’s high press, Leicester dealt with it well and came up with some good solutions of breaking the press and beating Liverpool’s first line.

We can see this below, with Leicester dropping a double pivot back behind Roberto Firmino and using the goalkeeper as an extra player, creating overall a 5v3. The two centre backs pull wide, which forces Sadio Mané and Mohamed Salah to remain wide and be ready to press. Roberto Firmino’s job usually involves cutting out the passing lane to the pivot or pressing the ball carrier, but with the goalkeeper on the ball with options to the side, Firmino opts not to press. With the wingers pinned wide, the passing lanes between Firmino and either winger increased, and so a risky pass from the goalkeeper through one of these passing lanes could be found and Leicester could play out.

Liverpool were not too flustered by this, as their central midfielders sat off rather than pressed, and so Liverpool had numbers back and relied on back pressing from the front three for immediate pressure on the ball.

We can see again here, the wingers are pinned wide and Firmino has two players in behind and so finds it difficult to use his cover shadow to block both. Again, the ball is played through the lane between Firmino and Salah and Leicester can progress up the pitch.

We can see here a similar situation occurs. Mané presses the goalkeeper from the left-wing and Firmino again has a double pivot dropped behind him. Here he chooses to cut off the passing lane to Tielemans, trusting that Sadio Mané cuts the passing lane shown to Ndidi. Kasper Schmeichel takes a risk again and plays the ball to Ndidi, and Leicester can again escape due to Firmino committing slightly to Tielemans.

A change in Liverpool’s pressing structure

We can see this below, where Mané prioritises the passing lane between himself and Firmino having seen the ball go through several times prior in the examples seen earlier. This leaves the full-back free to receive, but Leicester were reluctant to play down the line at times.

We can see a similar situation again below, where Mané decreases the passing lane between himself and Firmino and therefore allows the full-back to receive. This was a change from Liverpool’s usual pressing scheme, but Leicester struggled to build through the full-backs and from wide areas due to Liverpool boxing them in. Liverpool’s midfield has also stepped higher in these examples in order to decrease the space the double pivot has to work in.

Attacking in a game of football as a team can be simplified as attempting to score a goal while using the fewest amount of players as possible, so that if a goal isn’t scored you have players back to defend. In reality, it isn’t that simple, but it’s not too far away.

If you have quality players as Liverpool do, they can combine and work goalscoring opportunities using fewer players than lesser quality players can, and it was this principle in an away game title clash that served Liverpool so well.

Below we can see Liverpool’s general attacking structure, with the double pivot of Henderson and Wijnaldum providing cover for the defence while the full-backs pushed forward and Naby Keïta played a freer role in midfield. 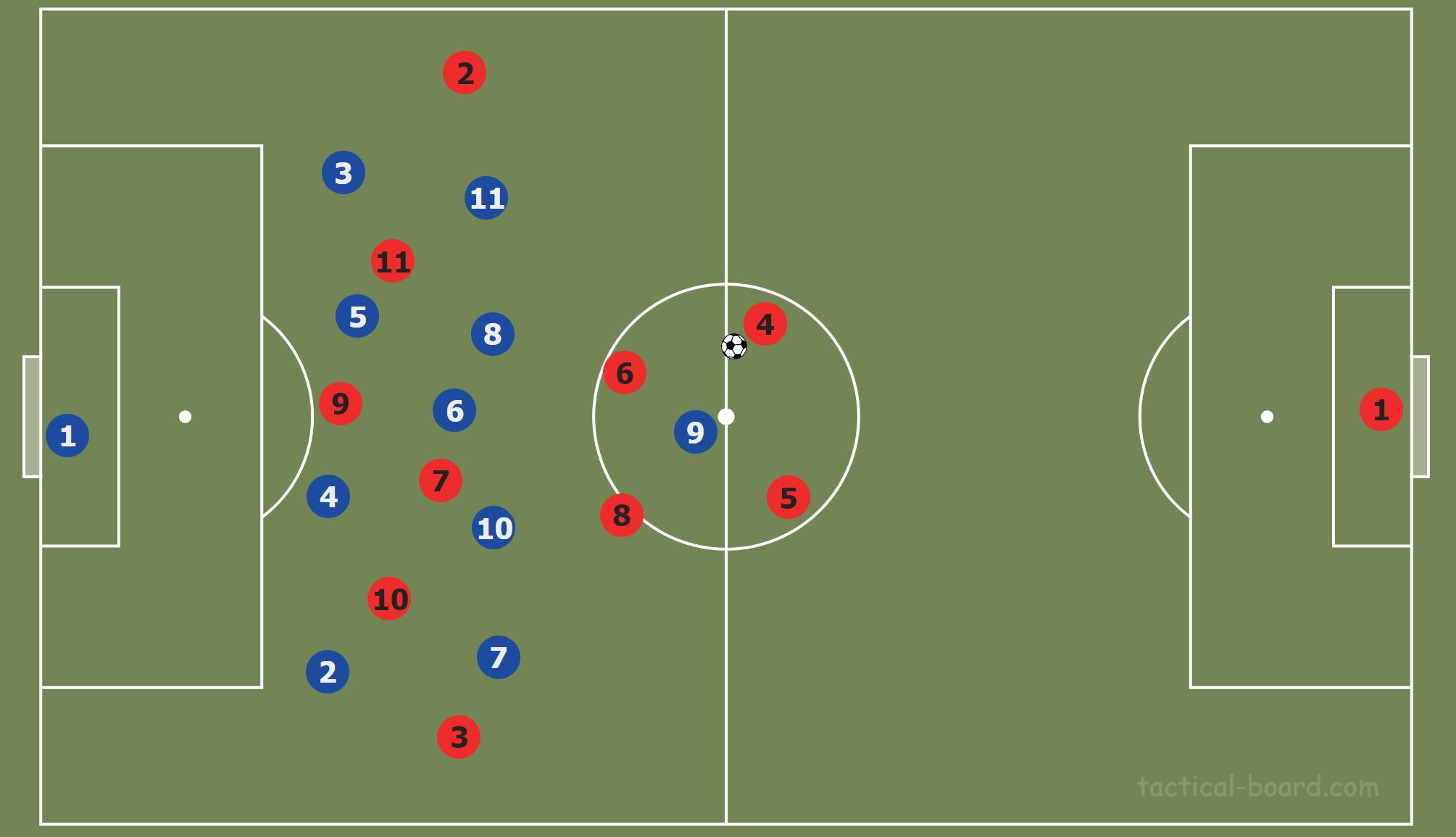 We can see this structure below with Wijnaldum and Henderson sat in front of the two centre backs, while Liverpool have six other attacking options up the field. But how did this structure work offensively?

Liverpool’s attacking tactics were not much new, with the wingers occupying the half-spaces and therefore creating space out wide for the full-backs. Runners from midfield (usually one not from the double pivot) into half-spaces also created space in deeper areas for the full-backs as we can see below, with Maddison unable to cut the wide pass due to Keïta occupying the centre.

We can see an example of this which lead to a goal. Here Milner, who replaced Keïta in the second half, makes a run into the central space, which attracts full-back Ben Chilwell inside. Liverpool are able to keep the ball, and Alexander Arnold remains wide and arrives into the space, where he has enough time to deliver a cross to Firmino for a goal.

Rest defence is the term for a team’s shape in possession and how its shape allows them to defend should the ball be lost. This average position map shows Liverpool’s rest defence well here, with the double pivot previously mentioned clearly shown. This structure allowed for immediate counter-pressing from the two deeper central midfielders, and also from other nearby players and those who had just left the ball. 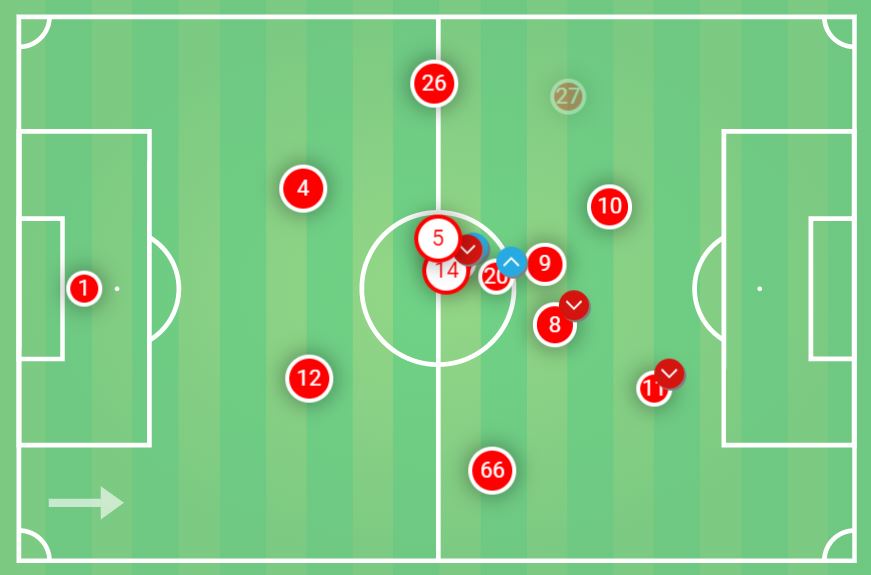 My favourite image of the game is easily this one below, with Liverpool forming a cage around Leicester and sustaining an attack. All three central midfielders are behind the ball after a clearance, and should the ball be lost from Henderson’s header they are in an excellent position to counter-press. They can afford to adopt this kind of ‘safe’ structure because of the quality of the front three.

Below we can see some more excellent counter-pressing sequences from Liverpool, which stopped Leicester from posing any kind of counter-attacking threat and helped limit them to 0.18 xG in the game.

Here Leicester regain possession and are immediately pressurised by players who lost the ball like Mo Salah. Wijnaldum rushes in and helps the counter-press, but Leicester get the ball past both of them.

Liverpool however still have two central midfield players back, and Keïta is able to press the ball carrier and look to cut the passing lane forwards. Andy Robertson behind is also ready to step in and press, while Henderson is also another body back occupying space. As a result, Leicester lose the ball when Robertson makes a tackle.

We can see again Liverpool’s rest defence or structure from which they can counter-press, with Wijnaldum and Henderson sat deeper and only three players in line with or ahead of the ball.

As a result, when the ball is lost Liverpool are in a good structure to counter-press well, and cut off any forward passing lanes Leicester could have created and again form a cage around the ball carrier. Henderson applies immediate pressure on the ball and Liverpool regain possession.

It was an absolutely dominant performance from the European champions that showcased all of their strengths. Trent Alexander Arnold was immense and tormented James Maddison all night, who fell victim to Liverpool’s attacking structure and every single Liverpool player carried out their role. It was a title-winning calibre performance from a team that may just be that at the end of May, and they controlled Leicester in a calculated way with little risks, as shown in this analysis. Myself and Klopp will not even entertain the idea that the league is now over as many have suggested, and Liverpool must now maintain their focus and their form into the next game and pick up another three points.