Norwich, rooted bottom of the Premier League and seven points clear of safety, faced a potentially crucial, home game against Tottenham on this latest edition of festive Premier League action. Were Norwich to lose here, their outlook on the season would look bleaker than it already is and this may dissuade any potential January arrivals from signing for the club. Tottenham, meanwhile, were still hunting down a top-four place alongside an improved defensive performance that has so far eluded them in terms of results under Jose Mourinho.

“Hamstrung” by a number of suspensions to Son Heung-Min, Moussa Sissoko and Harry Winks amid the clustered Christmas schedule, Mourinho was faced with the task of entirely reshaping his midfield for this game. In response, Mourinho ditched the 4-2-3-1 he’d been using up until this point and switched to a 5-3-2 formation. This meant there were starts for Giovani Lo Celso, Christan Eriksen and Tanguy Ndombele as a midfield three as well as for youngsters Juan Foyth and Ryan Sessegnon who were rotated into the backline.

Norwich, like every other Premier League team this week, were also forced into rotation, the most notable of which saw the likes of Todd Cantwell dropped to the bench in place for Mario Vrančić. Farke’s men continued in the 4-2-3-1 shape that had served them so well in the Championship last season but had seen the struggle so far in the Premier League. 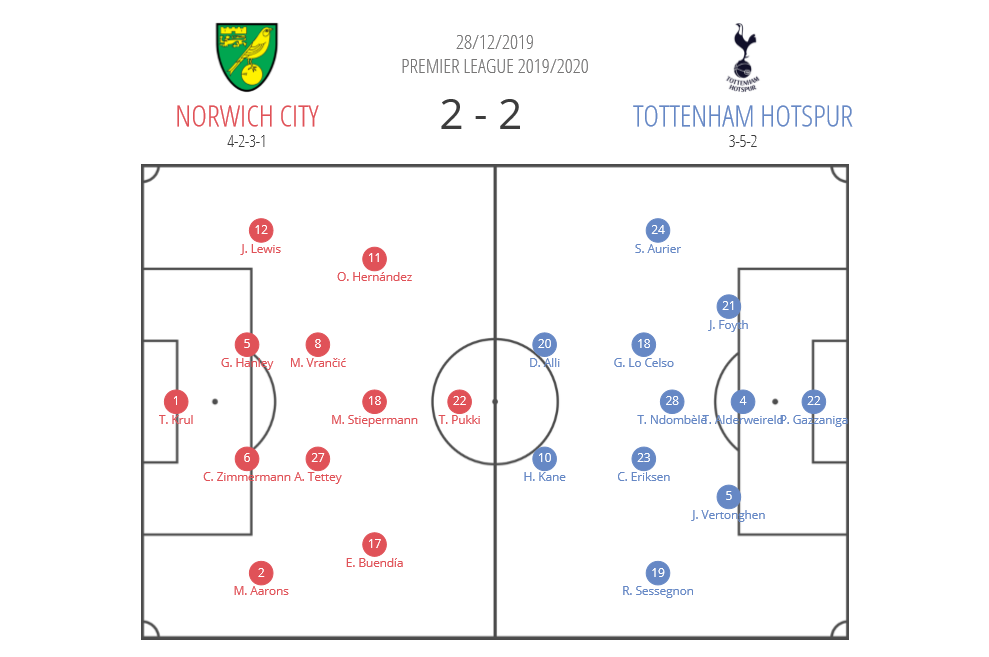 The change in formation made little difference to Spurs buildup despite the switch from a back four to a back three/five. Before the switch, when Tottenham had been playing a 4-2-3-1, they’d still effectively been building with a back three as Jan Vertonghen at LB would remain deep during the buildup phase of the game as Serge Aurier would operate in the same wingback role he occupied in this game.

This allowed Spurs to maintain their width by pushing forward both Aurier and Sessegnon which afforded the space in the centre for the game to be played by Tottenham’s new midfield. However, as a defensive shape, it handed too much initiative to Norwich as it was all the more difficult for Tottenham to break into the opposition’s half as all the pace Spurs had, was in their wingbacks, who were pinned back by Norwich’s possession.

Norwich pressure pays off in the first half

Due to the narrow nature of Tottenham’s formation, as well as Mourinho’s preference for remaining compact as opposed to pressing the opposition, Norwich enjoyed plenty of possession in Tottenham’s half in this game. Norwich used Onel Hernandez and Max Aarons to stretch the width of the pitch and provide a balance to their possession so they could allow Emi Buendia to operate in the centre of the field.

By overloading the centre in this fashion, Norwich could effectively counter-press the ball as well as counter on their opposition. Tottenham were weakened at the back having changed their shape with little training time to perfect their new system as well as by having to rotate the raw Foyth into the backline. By pressing the ball in numbers, it meant that should Norwich force a turnover, they’d have adequate numbers already in dangerous positions to counter on Tottenham and exploit the holes in their back three, much like they did for their opening goal.

From the image above, you can see how high Norwich were originally pressing the ball as Jamal Lewis (the LB, bottom of the screen) is already in a position to attack the box from this counter. Norwich’s overloads in the centre of the pitch encouraged the creation of opportunities such as this as it made it hard for Spurs to progress up the field and through the centre since their midfield was outnumbered and accounted for by the opposition.

The second half started in radical fashion for Tottenham as Mourinho reverted back to his favoured 4-2-3-1. This change saw Lucas Moura introduced to play on the left of midfield and Lo Celso moved to the right, which meant Ndombele and Eriksen still held the base of the shape.

This shift in formation encouraged much more rotation and interchanging from Spurs’ forward line and helped them to maintain more possession in Norwich’s half, effectively flipping the game on its head. This proved to be an extremely effective switch from the Portuguese manager as Norwich now severely struggled for offence in the second half and by the end of the game, Farke’s men couldn’t muster a single shot on goal after the half-time break.

The increase in the presence of players on the flank and further up the pitch helped Tottenham to pin their opposition into their defensive shape. This is because Spurs now had the potential to overload Norwich’s backline which pinned the rest of Norwich’s midfield to deep in their own half thus making it harder for them to break and maintain an offensive threat.

Ndombele was positioned at the base of Tottenham’s inverted triangle in midfield and as the buildup phase of play developed, it was common to see Eriksen and Lo Celso move into higher positions on the pitch in order to give Ndombele greater space on the ball but also plenty of forward passing options. Granting Ndombele this freedom on the pitch allowed the Frenchmen to truly excel in what he was bought by Tottenham to do… make progressive plays. After Tottenham switched to the 4-2-3-1, Ndombele remained at the base of midfield and continued to enjoy ample access to the ball.

Tottenham’s record signing completed 21/24 forward passes, 17/17 passes into the final third and 10/13 dribbles and was a simply dominant force of Tottenham’s possession play. Mourinho described him as “phenomenal” after the game and it was the midfielder’s impressive influence in the game that drove Spurs onto fighting back to achieve the 2-2 result.

Tottenham didn’t start the game well and Norwich didn’t look like a side occupying the 20th spot in the Premier League and the halftime score at 1-0 reflected that. Norwich would’ve been cursing their luck at halftime however after an incredulous offside decision cost them a 2-0 advantage however their luck soon came back around in the second half as a comical own-goal from Tottenham gave Norwich a potential winner despite the fact they could hardly muster any offence in that half.

Tottenham will rue their own defensive mistakes which undid their dominant second-half performance. Mourinho’s early switch to the 4-2-3-1 not only saved Tottenham’s blushes but it also completely castrated Farke’s side and gave Tottenham fans a glimmer of the potential of this side once Ndombele is finally set loose on the rest of the league.