Ajax‘s 6-1 win over Den Haag was an impressive victory. More than half of the starting eleven scored a goal. But while each and every player contributed to the victory in their own way, Ryan Gravenberch is the player we will be completing a scout report on. Gravenberch notched himself a goal and assist in the game, but his tactical analysis will look at what made him so effective throughout the entirety of the match, and why he was crucial to his team’s tactics.

During the buildup of Ajax’s attack, Gravenberch would drop off to receive the ball. He was playing in a double pivot with Donny van de Beek, however, positioned himself much deeper than his teammate. By dropping off, Gravenberch was able to receive the ball and turn into space to start the attack. We can see an example of him dropping off into space in the image below. 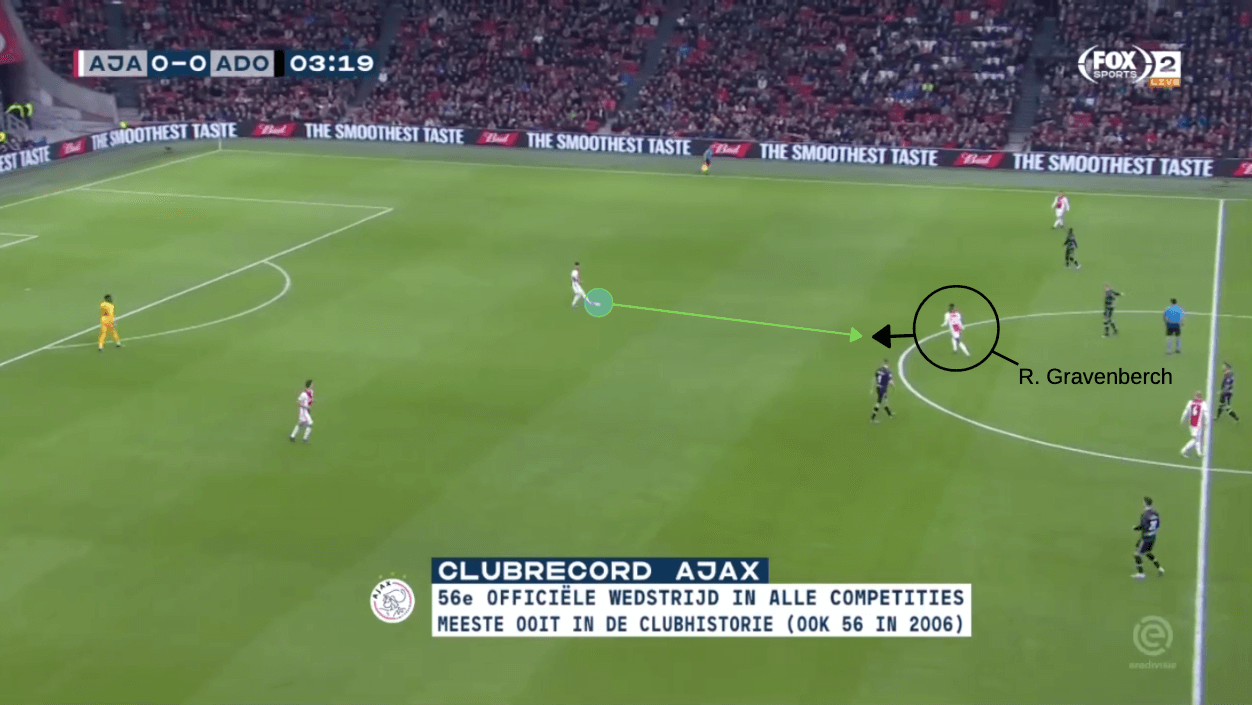 After he dropped off into space and received the ball, the midfielder’s primary objective was to keep possession. We can see from his passing statistics in the above section that Gravenberch rarely wasted possession. His overall passing accuracy of 95% was achieved because he waited until the opportune moment to make his penetrating pass. We can see his pass map below. 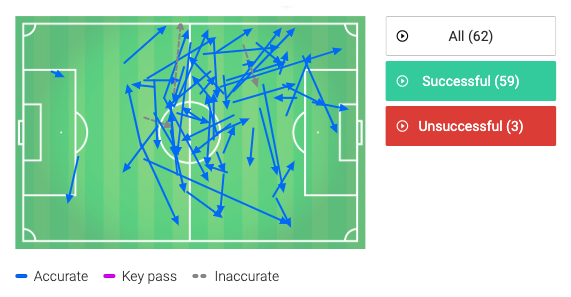 He wouldn’t force forward passes. This meant that Gravenberch was involved in many switches of plays and horizontal passes. We can see an example of the midfielder dropping off to provide support for right-back Sergiño Dest. Instead of dribbling into pressure, Dest passes the ball backward Gravenberch. 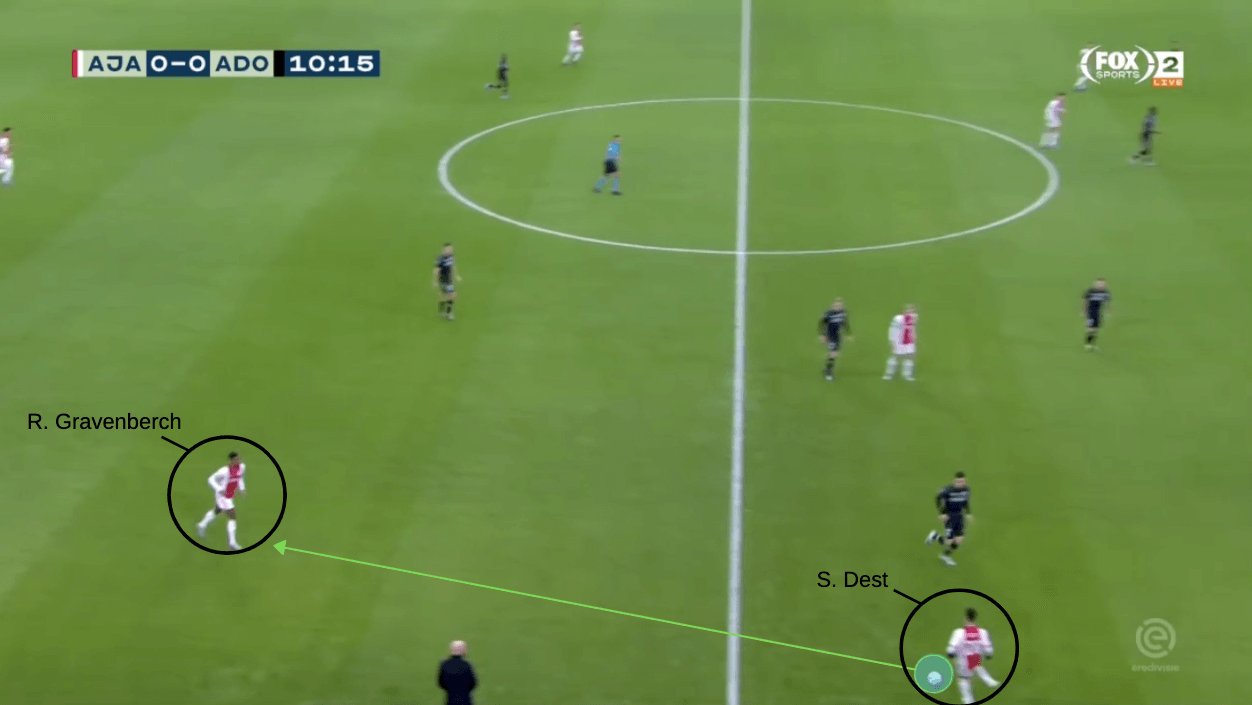 It is important to note that Gravenberch’s first look after receiving the pass is to go forward, which we can see below. With no safe forward passing options open, Gravenberch plays the ball back to centre-back Lisandro Martínez who switches the point of the attack to the left side of the field. 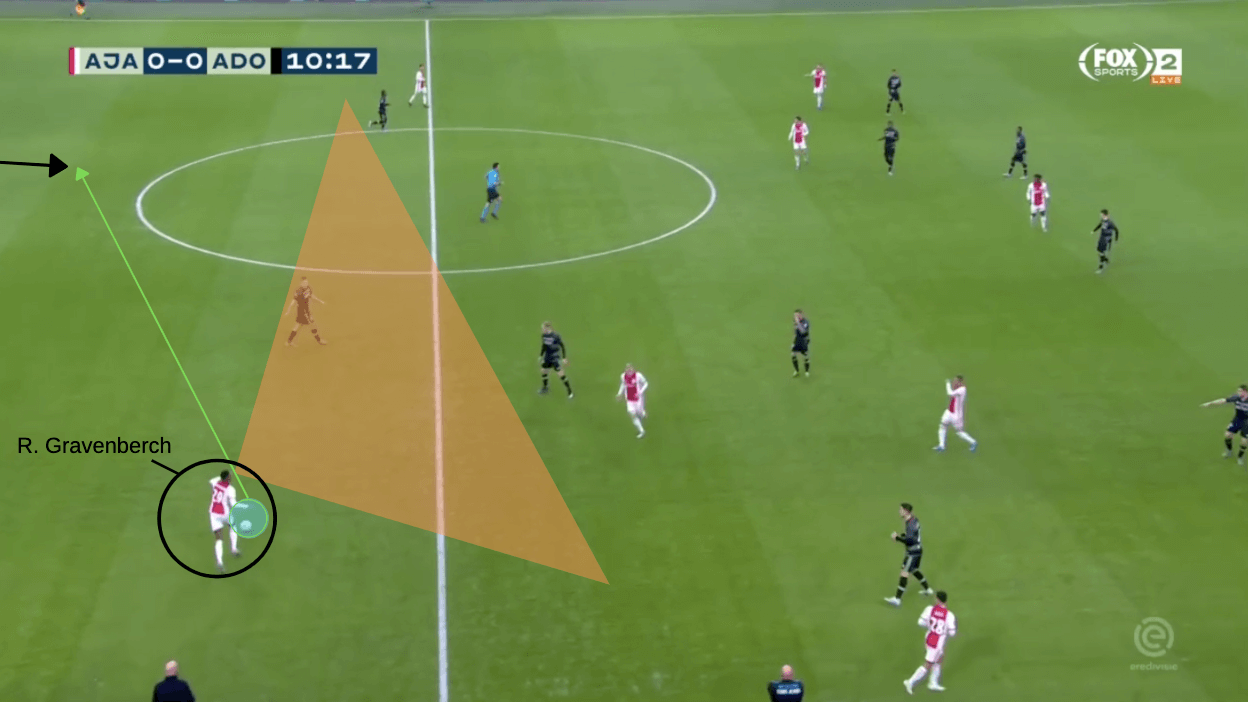 The 17-year-old was smart in possession but was still able to create chances going forward. As mentioned above, his first look when receiving the ball was always forward. In the following example we can see Hakim Ziyech check into the free space. This space was created because of how deep Ajax chose to possess the football. Gravenberch plays the ball into Ziyech. 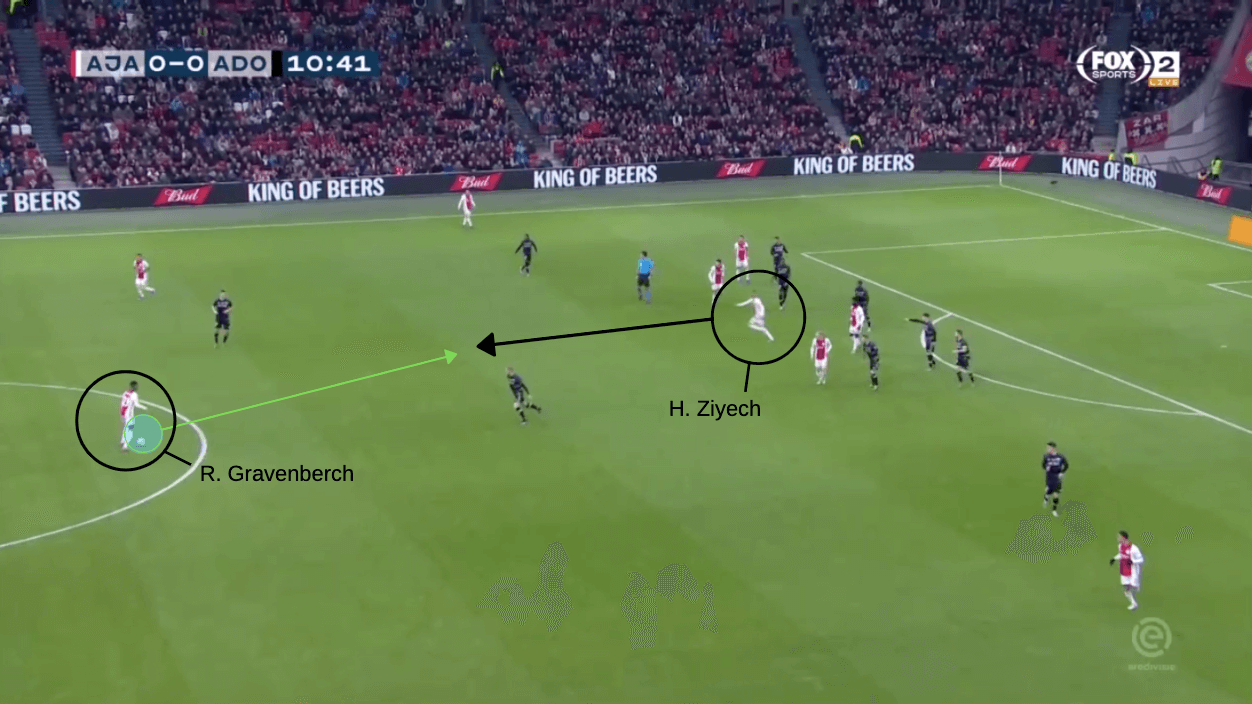 These examples show Gravenberch’s maturity in possession. Instead of attempting risky passes or dribbling into pressure, he was patient. This helped Ajax maintain a majority of the possession. We can’t criticise Gravenberch of being unwilling to progress the ball forward either. In the next section, we will showcase how the midfielder helped transition the ball from deep areas to the final third.

The above section showcases Gravenberch’s ability to hold the ball in possession until an opportunity presented itself to move forward. In these instances, the midfielder would take on an opponent on the dribble, assuming there was a 1v1 isolation, or play a direct ball into space for his teammates. He would only try this when there was limited risk involved.

In the following example, we can see Gravenberch drive past an opponent to progress the ball on the dribble. With limited forward passes on, he beats his marker on the dribble and plays a ball into Dušan Tadić who holds up the ball. This forces the Den Haag defenders to shift towards that side of the field. 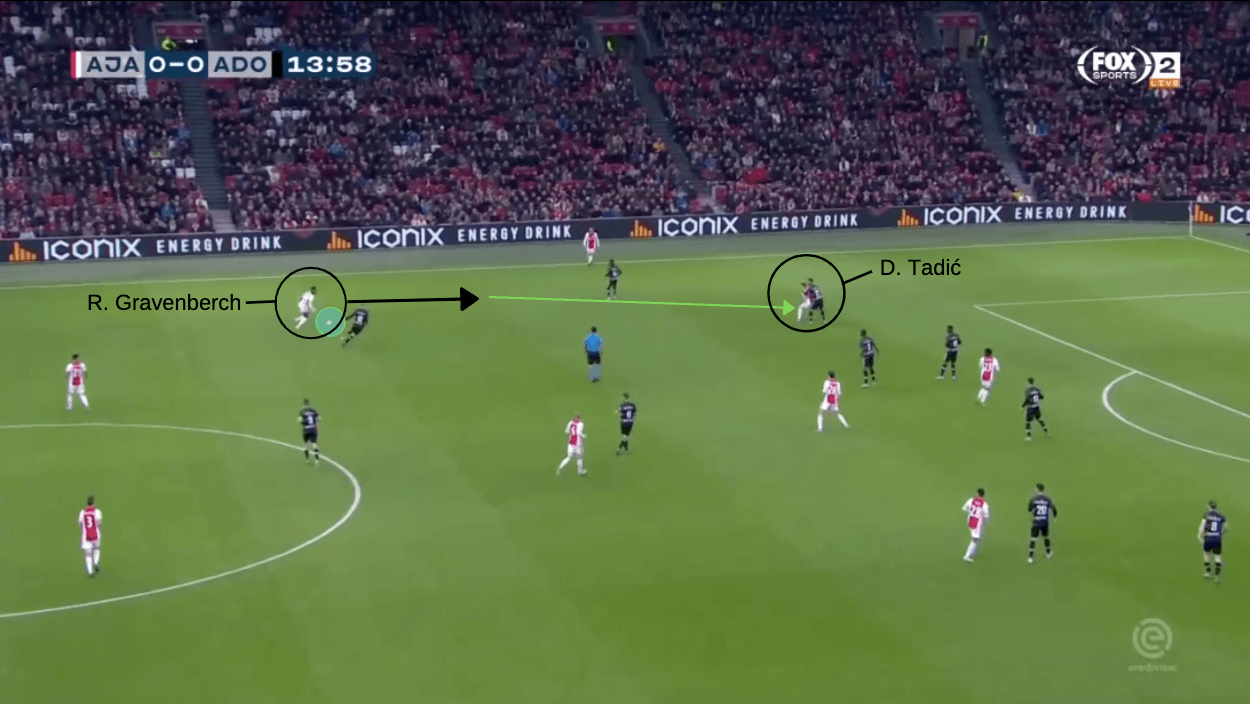 Then Gravenberch loses his marker by coming inside the field to receive the ball back from his teammate. This allows him to switch the field to Ziyech who has much more space to operate in. 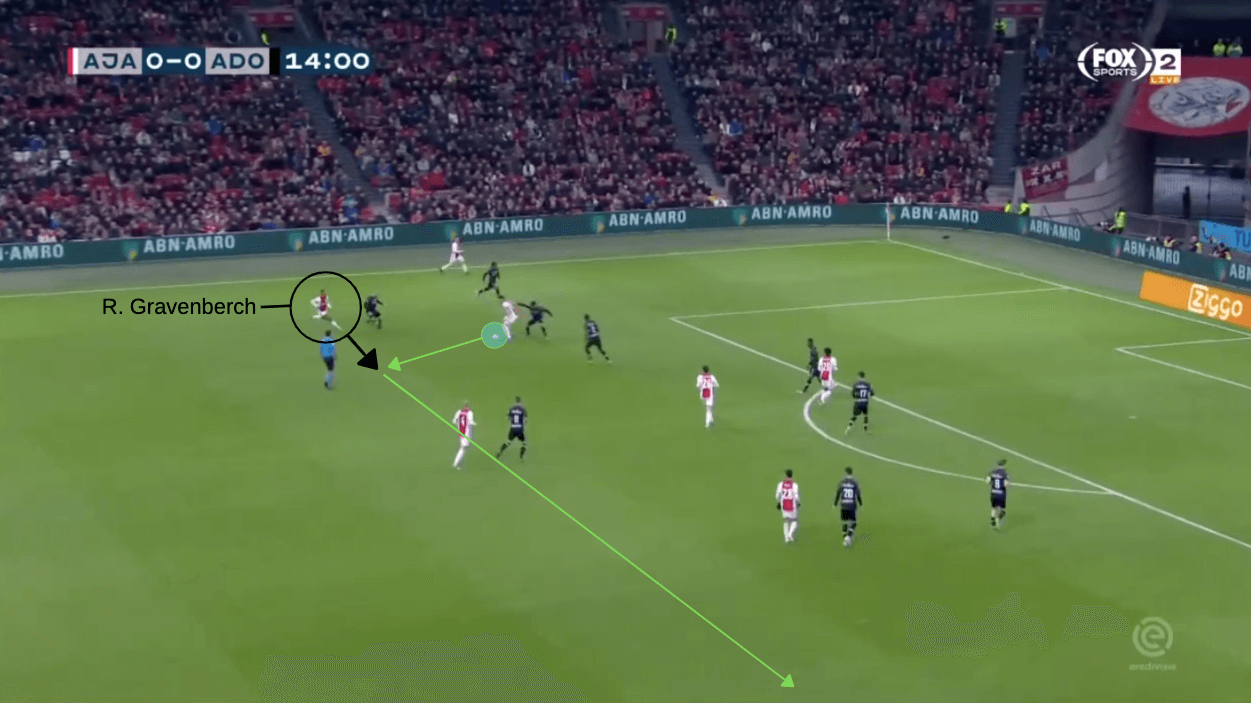 This wasn’t the only time Gravenberch opted to progress the ball on the dribble. We can also see him drive into space in the 16th minute shortly after his team scored their first goal. After receiving the ball in a deep area, the midfielder recognises free space in front of him. With there being limited risk in attempting to dribble into this space, he drives forward before playing the ball out wide to Tadić. 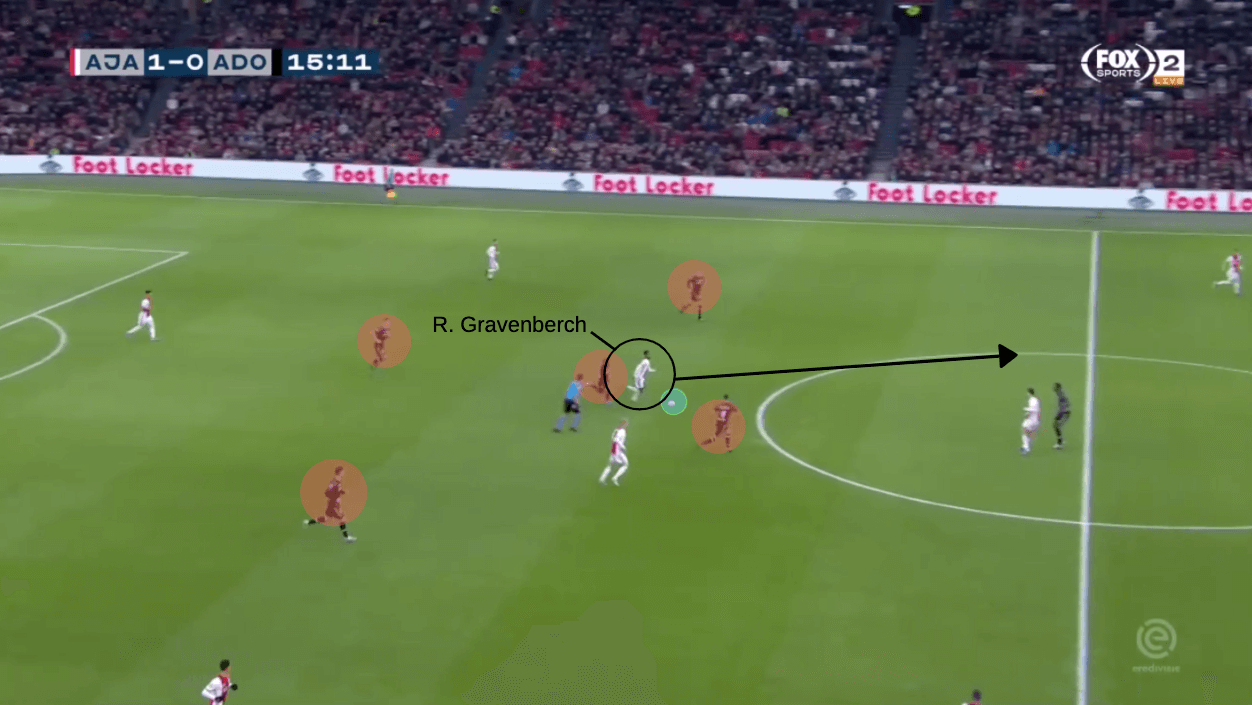 Dribbling wasn’t the only way Gravenberch quickly progressed the ball though. He didn’t limit himself to short passes in the midfield. If the opportunity presented itself for him to play direct, he would. In the 45th minute Gravenberch receives the ball from Joël Veltman. As always, his first look was forward. He spotted the run of Ziyech out wide and played a driven ball into the space.

This pass nearly resulted in a goal as well, however, Jurgen Ekkelenkamp couldn’t convert Ziyech’s cross. All of the examples above show Gravenberch’s ability to progress the ball. It also shows his patience and good decision making. He never felt pressured to play forward, despite always looking forward when receiving the ball. These mature decisions resulted in incredible passing statistics from this game.

At 17 years of age, Gravenberch hasn’t played a ton of senior football. He has played regularly for Ajax’s U21 side this season, but with his shining performance against Den Haag, Erik ten Hag could be convinced to bring him back into the first-team fold more regularly. He is certainly a name to look out for in 2020. If he does break into the senior squad, he could become one of the names on a long list of Ajax expats to make big money moves to some of Europe’s heavyweights.