When Maurizio Sarri was announced as the new Juventus head coach, it was obvious that his arrival would change the roles of a lot of his players. One of those who were expected to slot into Sarri’s style seamlessly was the Bosnian midfielder Miralem Pjanic. Already after two games, we can see that he has adapted his game to Sarri’s tactics. This tactical analysis scout report will look at how we can already see signs of Sarri’s coaching and what Pjanić’s role is in Juventus setup.

This piece will only discuss Pjanić’s role in possession since his defensive role is quite straightforward in a positionally-orientated defensive system where he defends space rather than men.

Pjanić plays as the deepest midfielder in a midfield three in which he has been accompanied by Sami Khedira and Blaise Matuidi in the first two games. For Sarri’s football to work, Pjanić’s positioning and movement to become free are critical. His job is not to drop in between the centre-backs to pick up the ball. Instead, Pjanić must position himself behind the opponent’s first pressing line. This is done to break the first pressing line with a pass to Pjanić. We can see this in the image below.

It is not always easy for a midfielder to become free in these areas, especially if the opponent have a well-organised first line of pressure. Thus, Pjanić must use clever movement to open up a clear passing lane and become a free option for his centre-backs. In the image below, we can see him doing just that. With Matthijs De Ligt on the ball, Pjanić is initially covered by Hirving Lozano but then makes a little movement outside of the Mexican’s cover shadow to become a pass option that breaks Napoli’s first pressing line. 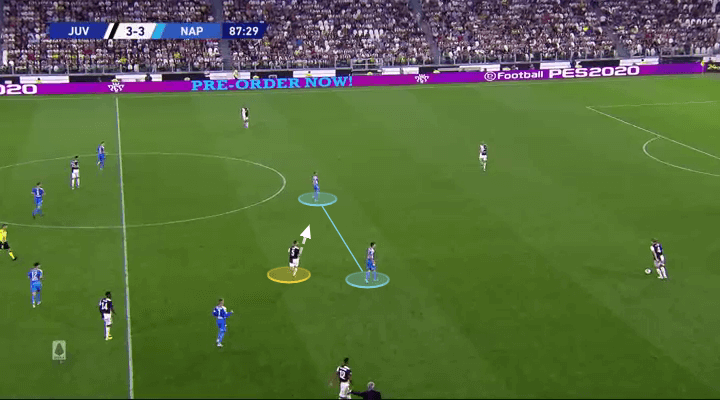 That is Pjanić’s initial role in the attack. He needs to find space to receive passes that break the opponent’s first line of pressure. Now let’s move onto Pjanić’s role when he actually gets the ball.

Role when building from the back

One of the main roles of a Sarri pivot is to attract pressure from the opponent’s midfielders and lay the ball off to a defender who can then progress the ball into the space vacated by the midfielder pressing the pivot. We can already see that Pjanić has grasped this. As mentioned, he positions himself behind the opponent’s first pressing line and looks to receive from the centre-backs. When he does, he will turn if possible, but often just lay the ball off to the other centre-back in order to move the opponent and open up new gaps in their defensive shape. In the image below, we see an example of this.

We can see a similar situation in the image below but on this occasion, it is the Napoli forward who is attracted to Pjanić. In the past, Pjanić might have turned and looked to play forward straight away but he lays the ball off to Bonucci who has a lot of space due to the forward pressing Pjanić. This is further evidence of how he is learning Sarri’s ideas. 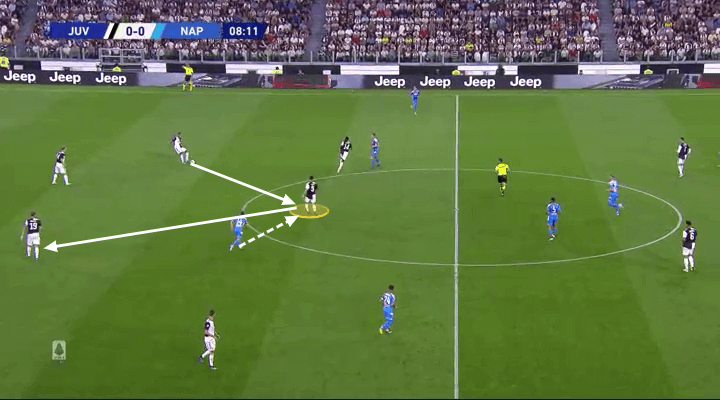 Finally, we have an excellent example of his role in this particular method. In the scene below, Mattia De Sciglio plays the ball inside to Pjanić. The Napoli midfielder is attracted to Pjanić, which opens up a huge space in midfield behind him. Pjanić lays the ball off to Bonucci with a one-touch pass and Bonucci could then theoretically have progressed the ball into that space had Matuidi or Cristiano Ronaldo moved into that space. As the other players will learn Sarri’s way too, Juventus will have more success from this particular passing pattern. 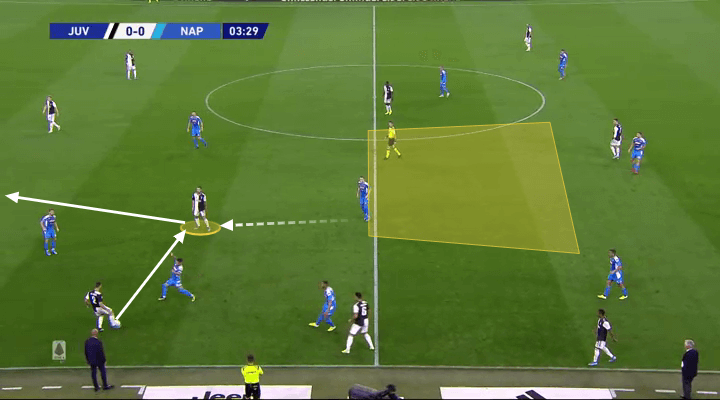 Pjanić has always impressed with his creative passing and that does not seem to change under Sarri. Firstly, Juventus often look to get Pjanić the ball when he’s facing forward with pass combinations of the type seen below. This is another trademark pattern of Sarri’s football. De Ligt finds Matuidi, who is positioned on a higher line than Pjanić, and the Frenchman then lays it off to the Bosnian who can progress the attack. 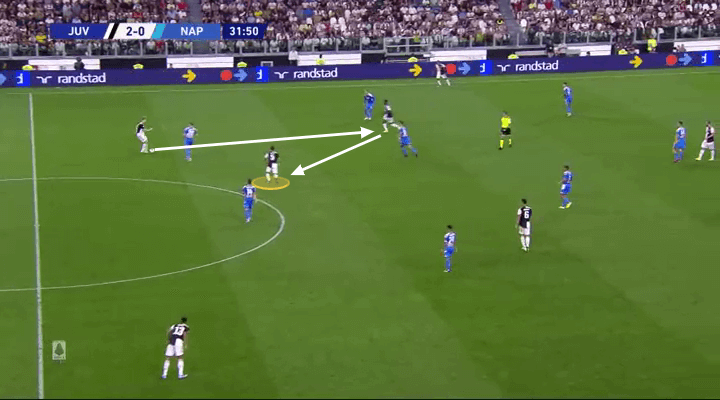 The main ability Pjanić brings to Juventus possession play is his ability to break lines with his passing. A stunning example is seen below. Juventus have attracted Napoli to press with six players quite high up the pitch, which has left the midfield area exposed. Pjanić threads a pass to the onrushing Khedira and Juventus have beaten Napoli’s press thanks to the Bosnian’s ability to break lines. 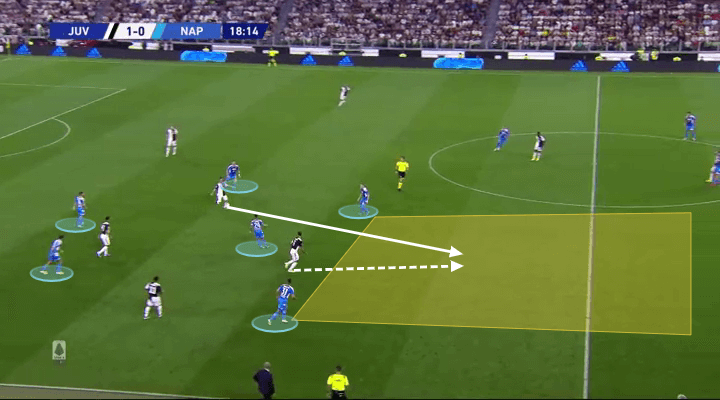 The below image sees Pjanić spot Ronaldo in the space between the lines of Napoli’s defence and midfield. This type of pass is critical to Juventus’s opportunities to progress the ball centrally and hurt teams with free players between the lines. Pjanić repeatedly makes passes like this throughout games and is, therefore, a great asset to Sarri. 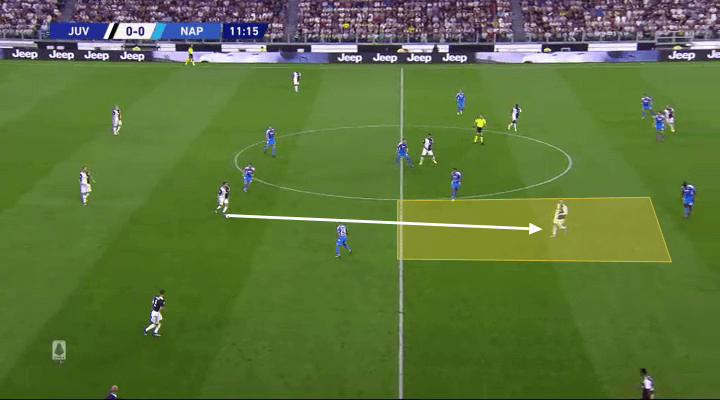 Pjanić also has the ability to progress the ball quickly using only one touch. This is very helpful when facing teams that might get into a compact defensive shape quickly. If the passing tempo is increased, they will have less time to get into shape. We can see one such pass in the image below. On this occasion, Pjanić receives the ball from the right and plays it into Gonzalo Higuaín using only one touch. This breaks Napoli’s midfield line and allows Juve to access the space just in front of Napoli’s back-four. 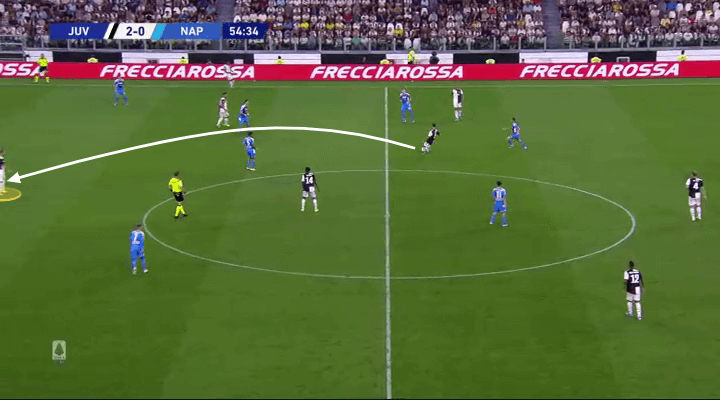 Due to his passing range, Pjanić is a huge asset in the final third from his position at the base of midfield. Juventus position a lot of players between the lines and threaten with runs in behind the defence. With Pjanić sitting deep and running attacks, he can access all of these spaces if the possibility is there. Take the image below. The Bosnian could easily switch the ball wide to De Sciglio, he could play straight into Khedira between the lines or he could lift over the defence to Ronaldo on the left. 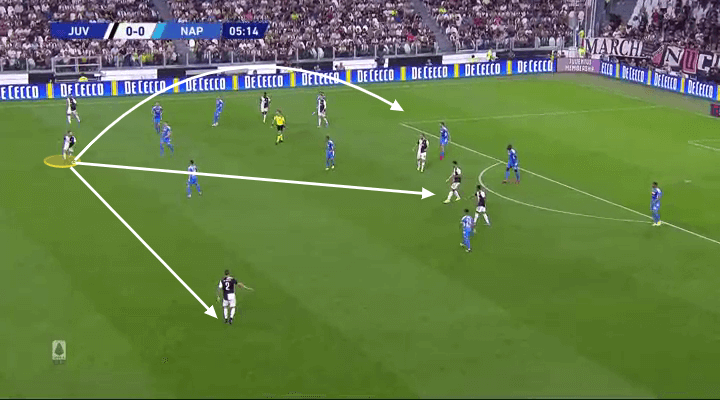 Pjanić’s passing ability is among the best in Europe, and with his creativity, he is a tremendous asset to this Juventus team.

As this analysis has shown, Miralem Pjanić has adapted quickly to Maurizio Sarri’s tactics and he will only improve when given more time under the new coach. Additionally, as Juventus will play more and more like Sarri wants them to, Pjanić’s influence will rise and we can probably expect him to average around 95-110 passes within a few months. His importance to Juventus is huge and will only grow as he continues to develop in the style the new coach implements.