RB Leipzig was the only team in the German Bundesliga to win all three first games and so they’re currently at the top of the table with nine points. Their new coach Julian Nagelsmann used a different starting eleven in each of those and always rotated the team. Kevin Kampl played a total of 143 minutes in those three games.

The Slovene is maybe one of the most underrated players in the first German division, but what makes him so important for RB Leipzig? In this tactical analysis in the form of a scout report, we will look at his abilities and explain why he is so important for his team’s tactics.

One of the 28-years-old’s greatest weapons is his versatility. He can play in every position in the midfield. Either in the centre or on one of the wings. During his career, he played in every single position in the midfield but made his most appearances as a central midfielder. When we look at his heatmap of last season, we can see that he’s almost all over the pitch.

His work rate is unbelievable, and he tries to help his teammates offensively and defensively wherever he can as we will see later in this analysis. Last season, he made 27 appearances for RB Leipzig in the Bundesliga and in 22 of them he played in central midfield, but mostly more on the left side as you can see in his heatmap. In the remaining five matches he was the left-winger.

During last season, RB Leipzig mainly used a 4-4-2 formation and Kampl was in the majority of the games the left central midfielder. However, since Nagelsmann took over the team this summer, they now don’t use the 4-4-2 formation exclusively. In the two Bundesliga games against Eintracht Frankfurt and Union Berlin, as well as against Osnabrück in DFB Cup game, they played with a 3-5-2 system. In their latest game against Borussia Mönchengladbach, however, the German coach did line his team in a 4-4-2 formation up with Kampl as the left central midfielder.

However, the Slovene’s positioning is always very interesting. When his team is in possession, at first he stays deeper to provide a short passing option for the defenders but then joins the attackers in the final third. But the 28-years-old often stays a bit deeper for two main reasons. Firstly, from there he has got a good overview and is always an option for a safe backpass. Also, RB Leipzig usually execute an aggressive counter-pressing to avoid counter-attacks from the opponent. With this deeper positioning, Kampl is in the perfect position to stop counter-attacks.

Furthermore, he permanently looks for free spaces in which he positions himself to help to create goalscoring chances. Kampl scored just twice last season in the Bundesliga but assisted six times, which isn’t too bad for a player who has to focus on his defensive responsibilities too. In the example below, he drifts to the outside to create some distance between him and the defender. This space gifts him the time to deliver a great cross which Yussuf Poulsen can convert into a goal.

This example showed that you can find Kampl all over the pitch. One moment he is positioned deeper to be in a good position to stop a counter-attack, and the other you can see him wide to separate himself from his opponent. But, in general, there are many other typical situations as we will see now in this analysis.

When the Slovene plays as a central midfielder one of his two main tasks are to win balls in front of the back four or back three. For example, in the game against Gladbach, he tallied 11 recoveries in 69 minutes he spent on the pitch and six of them were in RB Leipzig’s half. With his speed, aggressiveness and agility, Kampl is really important for Leipzig when the opposition has the ball.

Due to his time at RB Salzburg between 2012 and 2015, the 28-years-old perfected his work against the ball and in addition to that, the Austrian club uses similar tactics to those of Leipzig. During his time at Salzburg, he played under the coaches Roger Schmidt and Adi Hütter. Both used a typical Austrian high and intense pressing paired with counter-pressing. In light of this, Kampl knows how to play with such tactics rather well.

The same philosophy was always used at RB Leipzig and coach Nagelsmann continued to work with it. Due to that, Kampl perfectly fits into Leipzig’s and the German coach’s idea of football. In the image below we see a typical scene from a Leipzig game during last season’s match against Bayern.

The two strikers, Poulsen and Timo Werner, cut off the passing options to the centre-backs and Bruma takes Joshua Kimmich out of the game. Kampl aggressively puts pressure on Leon Goretzka and you have to consider that Kampl is one of the two central midfielders in front of the back four. And now look how high he presses Bayern’s midfielder. He successfully wins the ball and immediately passes to Werner.

However, he doesn’t just support his teammates upfront to press in at the opponents but also wins many defensive duels in his own half. Due to his agility, speed and incredible stamina, he is able to help the back four like in the example below.

Wolfsburg’s left-back Jérôme Roussillon dribbles down the wing with his undeniable pace. But the Slovene makes up some ground, uses his body to win the ball and then plays a simple pass back to the goalkeeper to calm down the game.

Abilities on the ball

But as you would expect from a central midfielder, Kampl has also got a great technique. Whether it’s passing or dribbling, the 28-years-old is strong in both aspects. His abilities especially become visible when the opposition tries to put pressure on him, and he has to solve situations while under pressure.

He can mostly get out of such situations with his good technique as you can see in the example below. Several players of Salzburg try to press him, however, he stays calm and dribbles out of it with some quick steps and plays a safe pass.

However, since RB Leipzig are the favourites in the majority of their games in the Bundesliga, not too many teams use a high pressing system against them and so occasions like in the shot above don’t happen that often. Although, when he joins his teammates up front, he finds himself in this kind of situations more often than usual. Since most opponents defend very deep, Kampl often stays deeper and outside the opposition’s block as we saw in an image earlier in this analysis.

But, sometimes, he wants to join his teammates further up the pitch since he also wants to be involved in the creation of goalscoring chances. In these situations, he often finds himself in the middle of several opponents and needs to use his technique to solve the situation.

In the image below, for example, he receives the ball from Werner with two opponents on his back. He just needs one touch to control the ball and gives the German striker time to start his deep run. With the second touch, he plays a through ball back to Werner who misses the chance in the end. 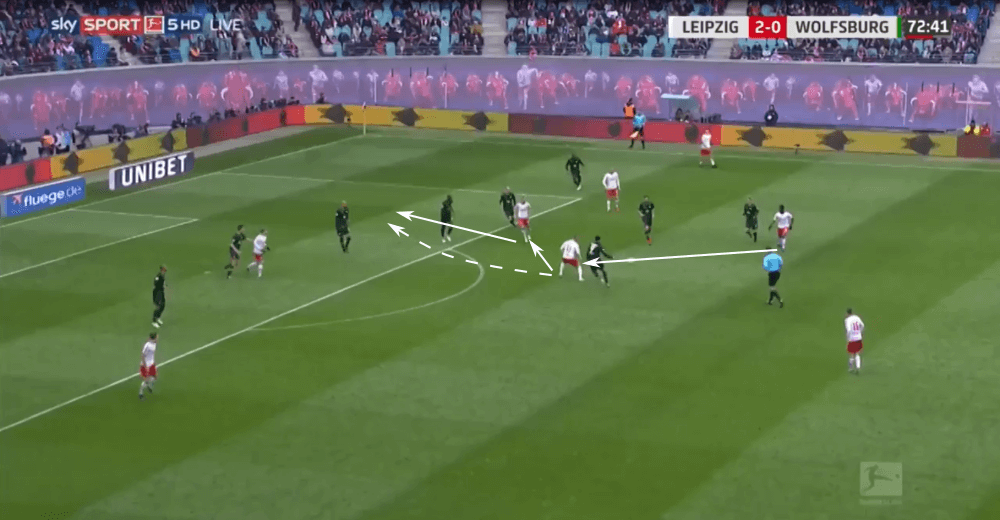 Through passes are, in general, one of his preferred types of passes. This is due to one big reason: RB Leipzig always trie to get behind the last line of the opposing defence as fast as possible. In addition to that, they have fast players like Werner, Poulsen and Marcel Sabitzer who make these through passes even more efficient.

In the example below, Kampl plays a perfect pass behind the last line of Nürnberg’s defence and brings Sabitzer in a one-on-one situation with the opponent’s goalkeeper.

However, these passes are especially dangerous during counter-attacks, which RB Leipzig often use. And as we already saw, Kampl is often the one who is responsible for the change of possession ahead of Leipzig’s counterattacks. When he wins the ball for his team, he often immediately starts a forward dribble or plays a forward pass to start the counter-attack.

In the example below, he intercepts the pass, then plays a give-and-go with Poulsen to be in a good position to play a well-timed through pass to Matheus Cunha. This is a typical action by the Slovene. 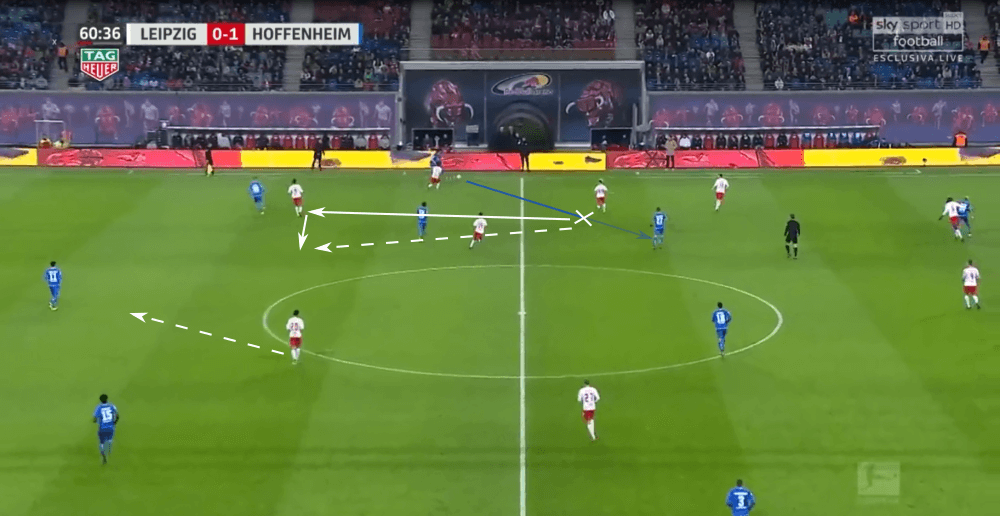 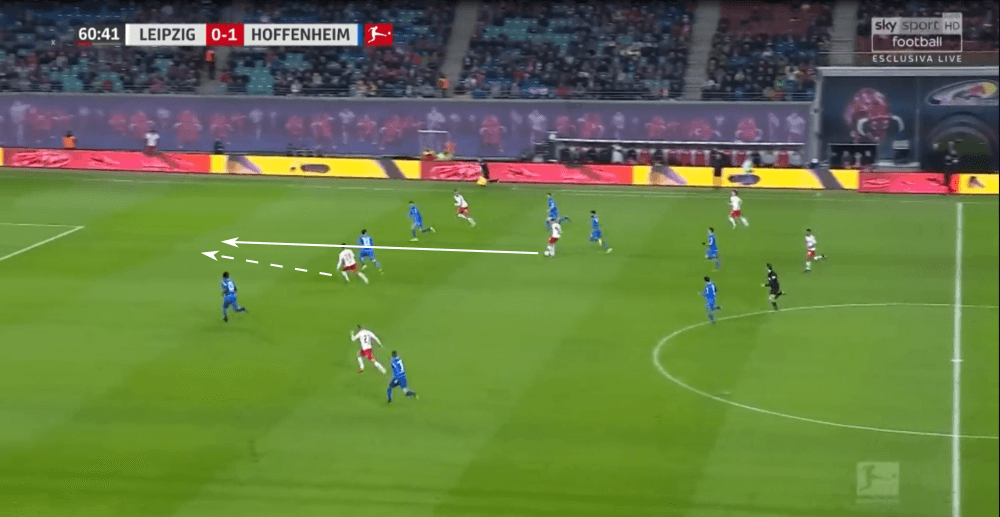 But Kampl doesn’t just play through passes when he’s already in the final third. He has good vision and so he is able to play this kind of passes over a longer distance. In the image below, you can see maybe one of Kampl’s most beautiful assists of the last season. He plays a lobbed through pass to Emil Forsberg who can controls the perfect pass with first touch and scores with his second one.

As this scout report showed, Kampl is an all-rounder who can play in every position in the midfield but is best utilised in the centre. In addition to that, he perfectly fits into the tactics and philosophy of Leipzig and Nagelsmann.

You can’t often find a player with such a high work-rate and at the same time, such a good technique and the ability to create goalscoring chances. It will be interesting to watch in which position Kampl and his team will finish this season and how far they go in the Champions League.