Alongside huge transfers like Lucas Hernández and Philippe Coutinho, Bayern Munich also signed Mickaël Cuisance from Borussia Mönchengladbach. They paid €12 million for the 20-year-old Frenchman, hoping that he would add more depth to the squad.

At Mönchengladbach, Cuisance was not a key player, which makes this move quite unusual. A player who has only played 268 minutes last season at an above-average club is usually not a player the Bavarians are keen to buy, as they always strive for the best. However, the Bayern scouts must have seen some special talent and a lot of potential in Cuisance to convince the club to buy this player. This scout report will analyse Cuisance’s style of play and how he could fit into Bayern’s tactics. Further, we are going to examine whether Cuisance really might explode at Bayern or not with our tactical analysis.

Cuisance is a left-footed central midfielder with great technical skills and good playmaking skills. Throughout his career, the percentage of his completed passes is constantly around 80% in every single season. In a possession-based team like Bayern, this will further improve. 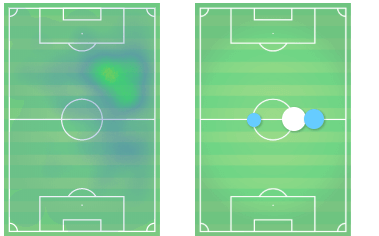 From this heatmap, we see that Cuisance likes to occupy the right half-space. Thanks to his strong left foot, he is then able to recognize good passing angles. The image below provides an example of this. 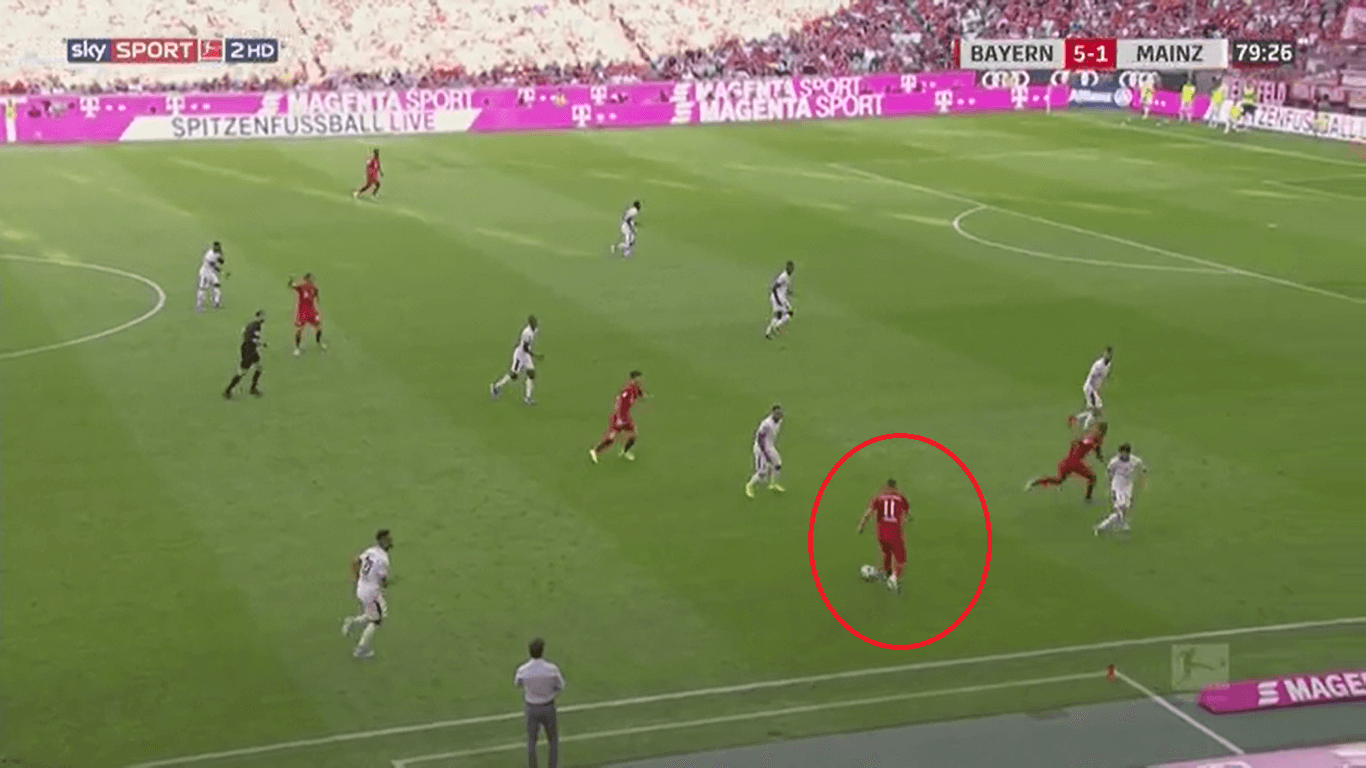 Cuisance is on the wing and overlooks the whole pitch. His body positioning enables him to not only assess the nearby passing options to Kingley Coman longline behind the defensive line or Robert Lewandowski who moves into the open space, but also recognize Thomas Müller in the centre or even Alphonso Davies on the opposed wing. With one small cut to his left, he could even play a diagonal long-range ball to Davies. Depending on the situation, he might also reduce the tempo and move the ball backwards, if this makes sense. No matter what he finally decides to do, the point we are making is that the possible options he has are almost endless. Occupying the right half-space in a 4-3-3 might be a great fit.

Additionally, Cuisance could find himself in great finishing positions. While a right-footed player might not find a good angle to shoot from the right half-space, a left-footed player could find himself rather easily in such situations. Even though Cuisance is not known for scoring a lot of goals, an example in the Bayern jersey shows what kind of situations may arise for him. Looking at the image below, we can easily come to the conclusion that Cuisance must score a lot more goals now if he continues to find himself in such promising situations. 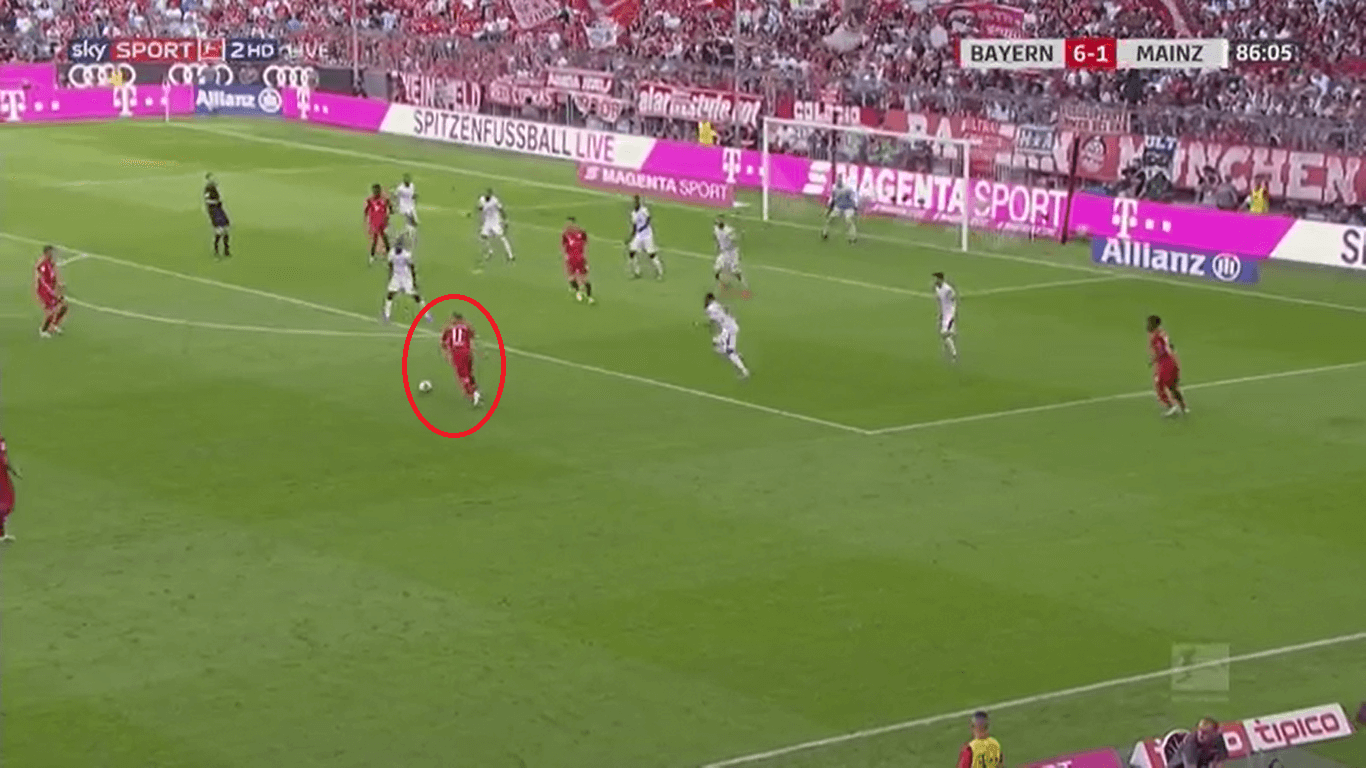 Cuisance as a deep-lying playmaker

With Renato Sanches’ move to OSC Lille, Bayern wanted to add another skilled passer to their midfield. The rumours about Espanyol Barcelona’s youngster Marc Roca pointed at the direction of a deep-lying playmaker, a player type that Bayern coach Niko Kovač desperately misses. Even though Thiago Alcántara plays like that sometimes, the Spaniard is without a doubt of more use in higher areas of the pitch where he can fully unfold his creativity. The question that arises is now: Could Cuisance fill out that role as well?

In the limited time he played against Mainz, Cuisance often tried to move into such a deep-lying playmaker role. 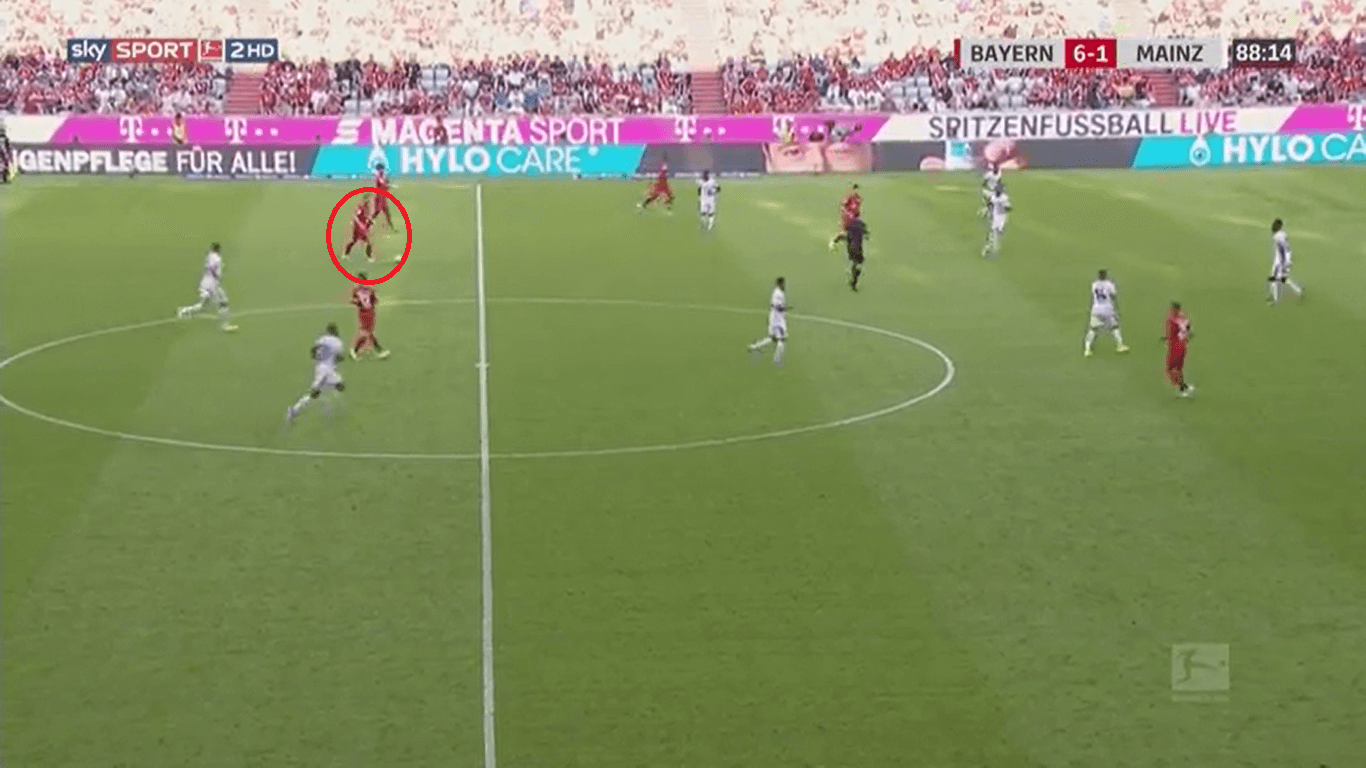 The young Frenchman was eager to pick up the ball early during the build-up and facilitate the attack from the back, like in the image above. With Joshua Kimmich in a double-pivot, the structure of Bayern’s possession game was not optimal though. They occupied the same line and stayed too tight together. However, Mainz left them a lot of space and were not able to punish this. Contrary, they let Cuisance do what he wanted. 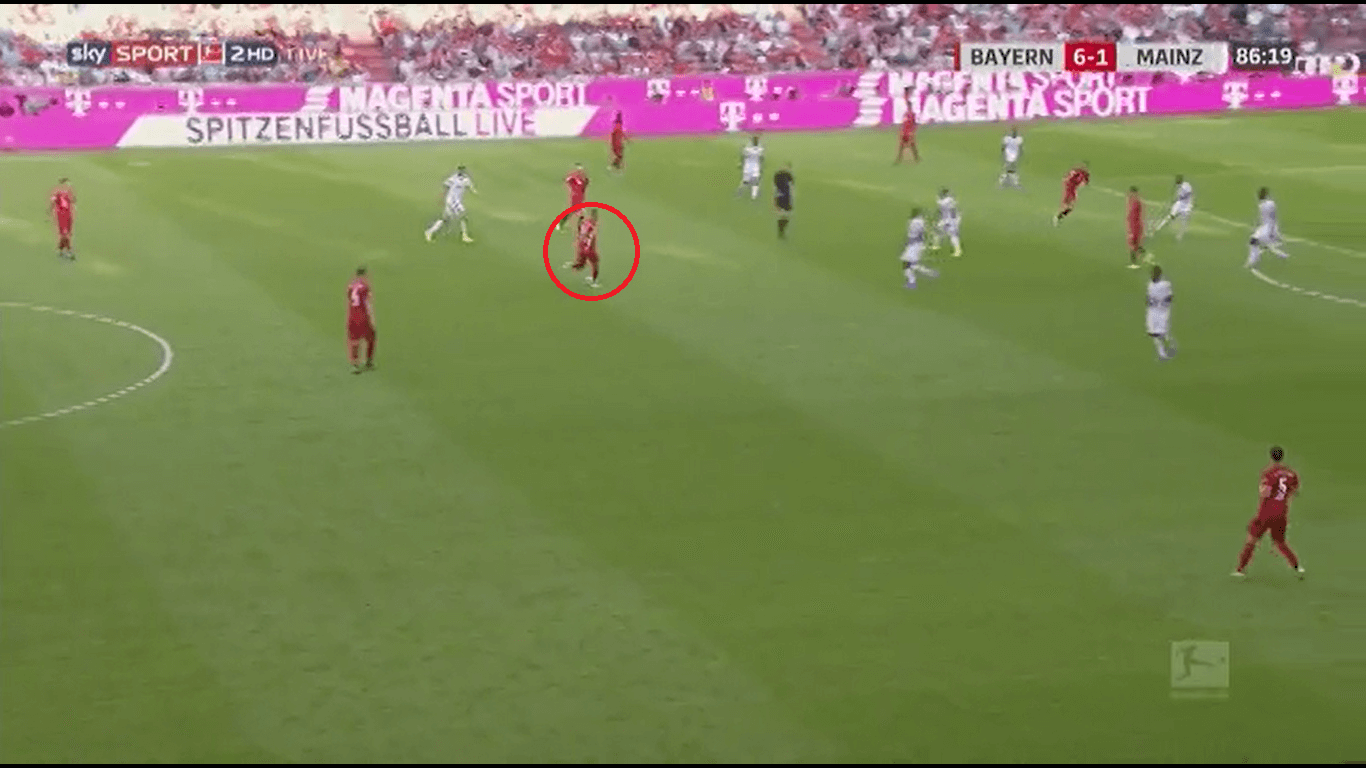 Here, once again Cuisance facilitates the attack and once again he has all the time in the world. This situation perfectly displays what he is able to do, as he brilliantly recognizes a deep run by Thomas Müller and tries to chip the ball to him. This kind of creative output is surely what is expected from him. 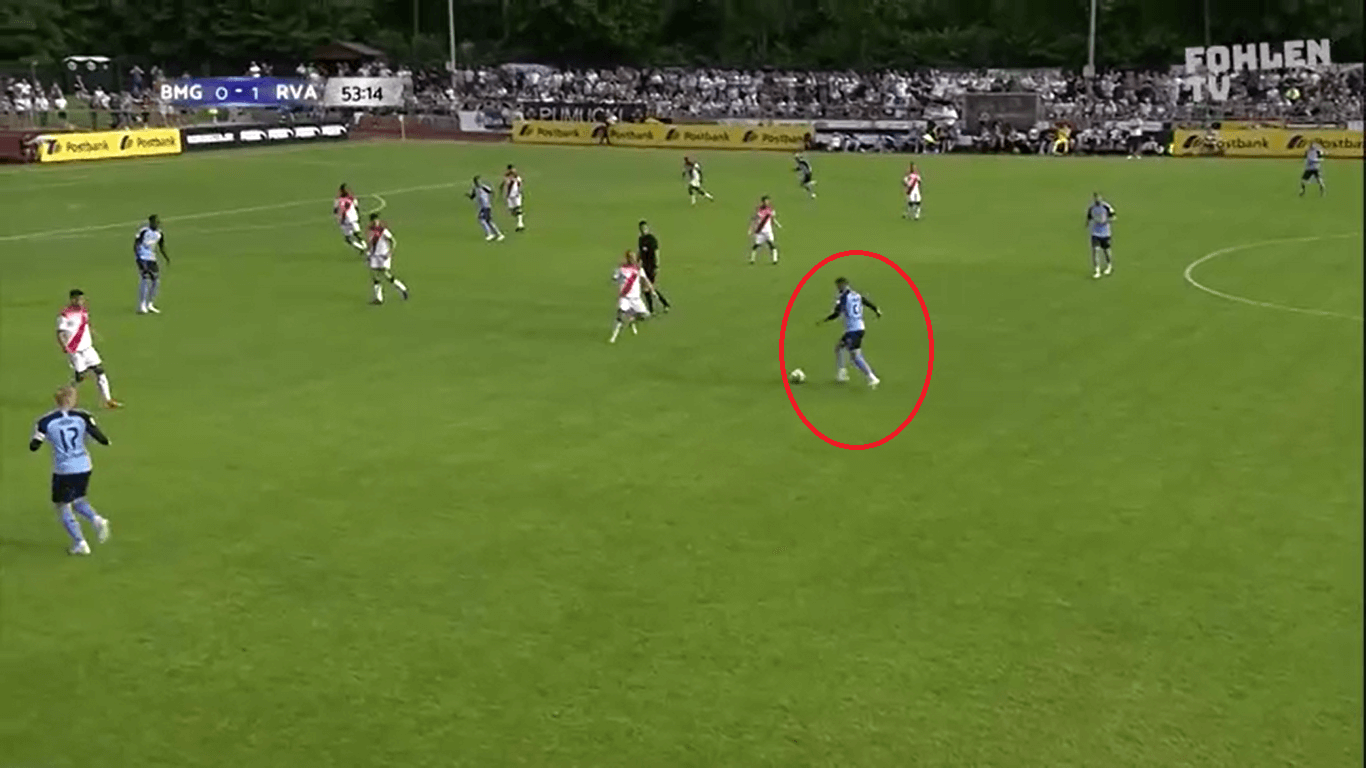 Already at Mönchengladbach, this potential could be seen, as he tried to shine as a playmaker there as well. Here, a similar situation arises where he sees an opportunity to play a long-range diagonal ball and does not hesitate to execute it.

What is truly exceptional is his extroverted attitude, which also reflects on his playmaking and leading skills. While no one would be surprised if such a young player reacted shyly playing for Bayern for the first time, Cuisance was directly giving instructions and tried to dictate the style of play for his team. 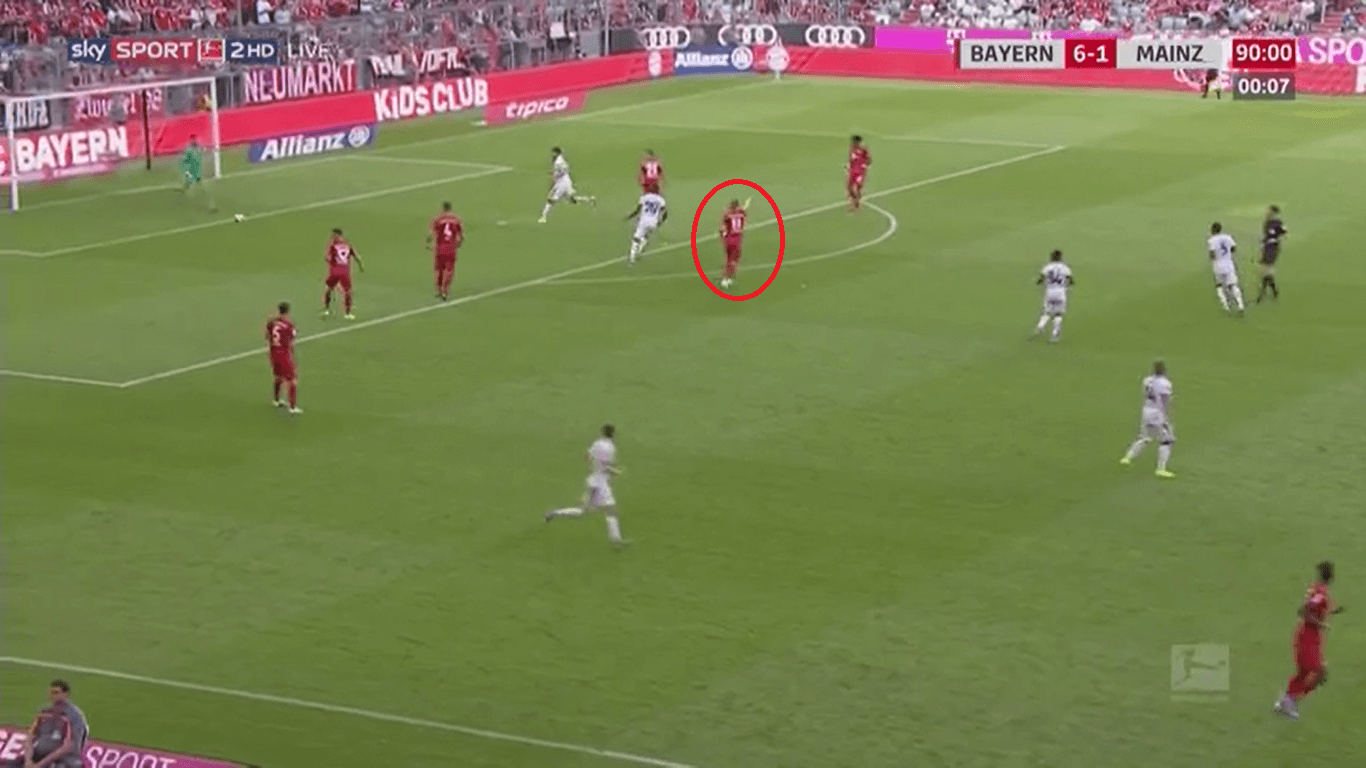 As a plus, Cuisance is also able to hold possession when he is pressured. The previous images all showed situations where he has a lot of time and is not under pressure, but Cuisance is also a pressing-resistant player which is a great asset to have in modern football. There are even some example from this Mönchengladbach time, where he plays key passes while being attacked by two players. The images above provide one such example, proving that Cuisance is also physically stable and strong under pressure. 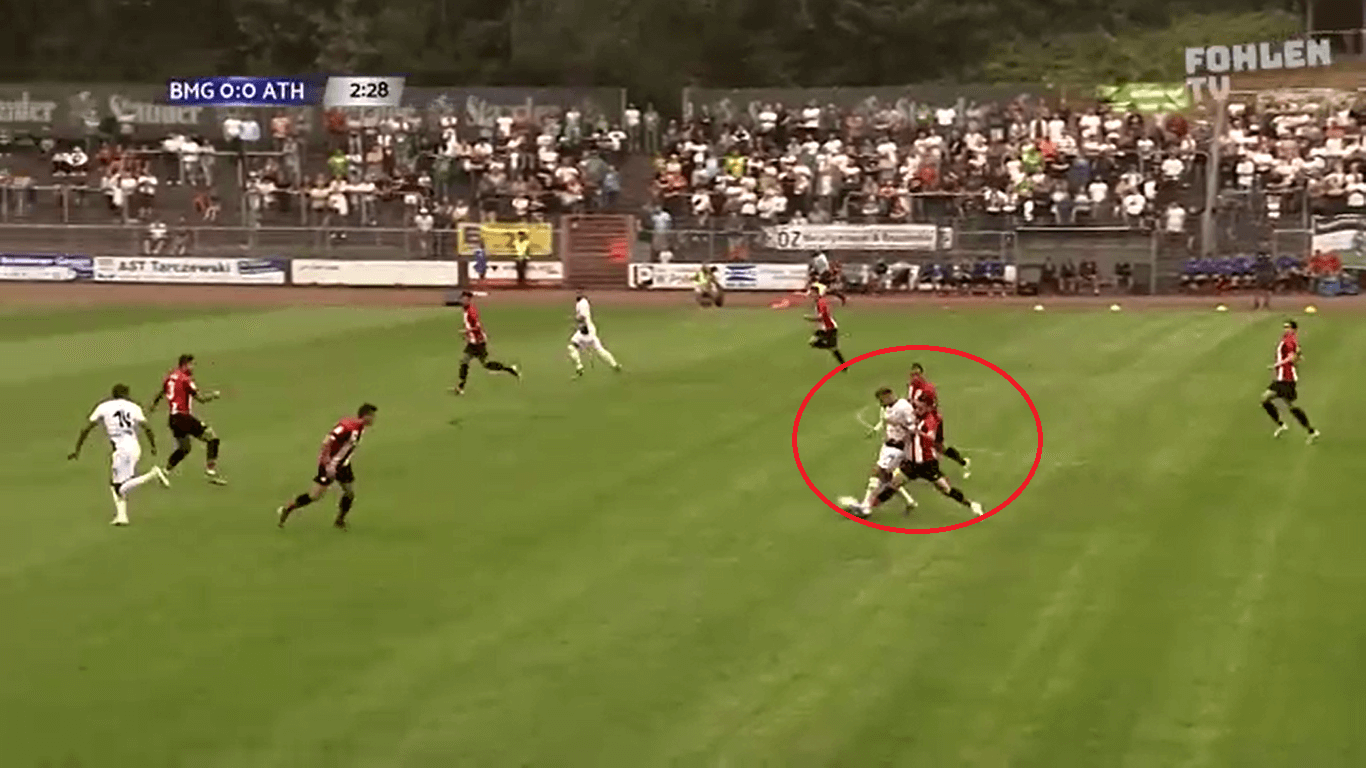 While his technical abilities are rather obvious, there remain some questions concerning his defensive strength. Cuisance is not really known to be a great defender, but there seems to be some potential to become an average defensive contributor to the team. 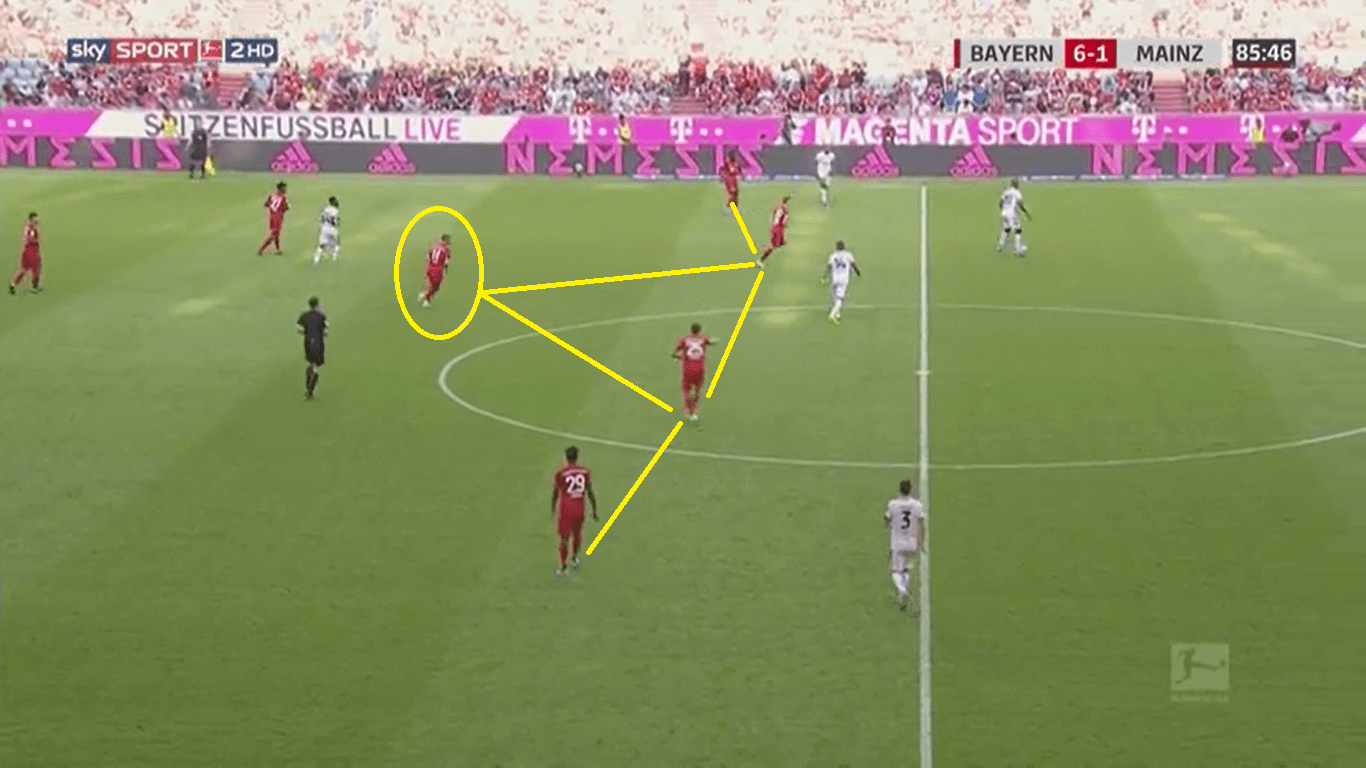 As the image shows, Cuisance played the role of a holding midfielder in a 4-1-4-1 defensive structure against Mainz. This role is highly complex and requires a lot of intelligent movement and anticipation skills. In a functioning team with a good structure, Cuisance might fulfil such a role. 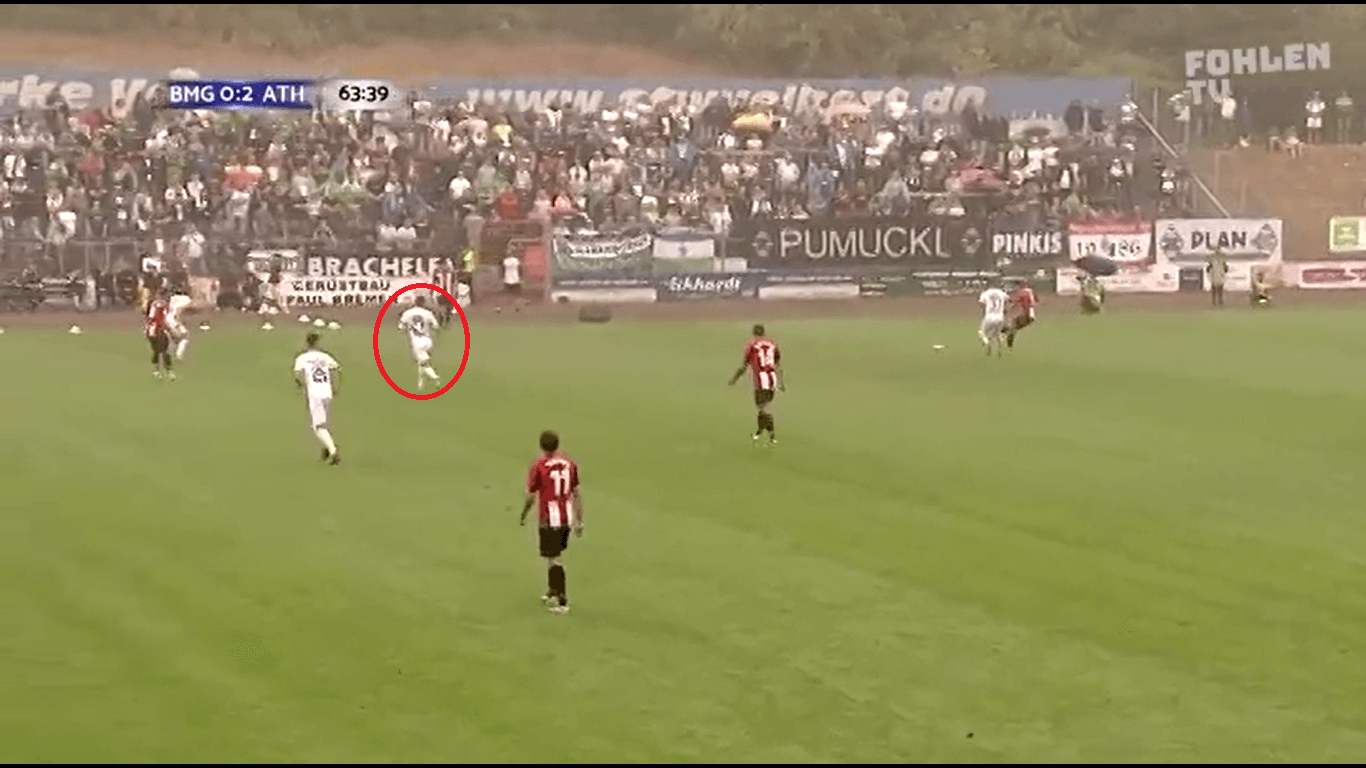 Here as an example, we see a great defensive action from him. Early on, he recognizes that the press by the attacker leaves the player with the ball with only one passing option, which is the vertical pass. Cuisance then leaves the opponent he man-marked alone in the centre, as he wants to intercept the pass. Thanks to this great anticipation, he is able to win the ball. If he can do this on a regular basis with constant output, he might be able to play a lot more as holding midfielder. Unfortunately, the sample size is rather small, so that it remains difficult to underline this with data. Thus, the question marks remain, but there is for sure potential in that player.

As we have mentioned earlier, Cuisance is also physically strong than one might think at first. This also shows occasionally in some pressing moments, where he attacks the opponent aggressively. In some moments like in the image below, he is then able to win the ball. Unfortunately, those moments are somewhat rare, as he is not able to bring in this aggressiveness on a constant base. 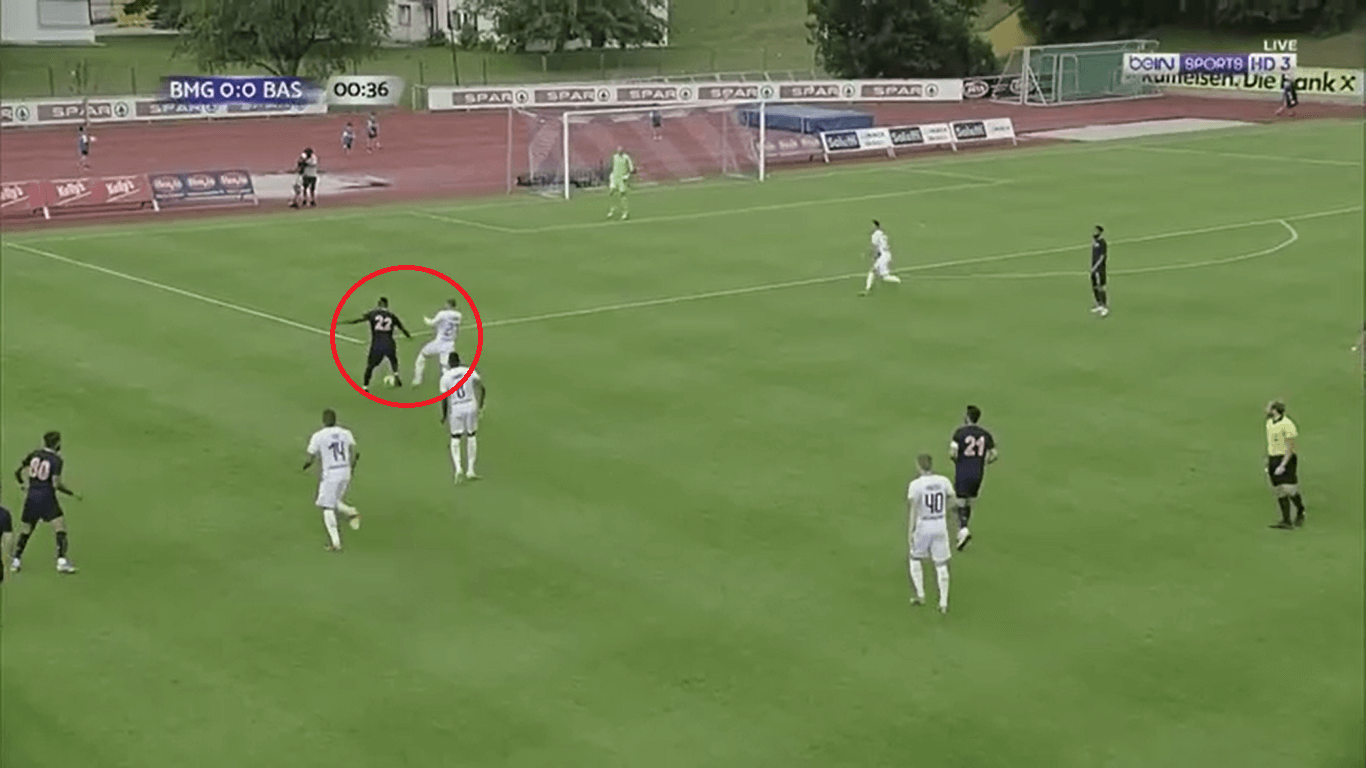 It was surprising news that Bayern would buy Cuisance. He did not dominate Bundesliga or even showed something that made him irreplaceable for Mönchengladbach. However, at second sight, there are some skills and abilities that Cuisance possesses which make him interesting even for a club like Bayern. One cannot expect him to constantly be part of Bayern’s starting XI, but nonetheless he may help them ensuring a certain depth in their squad. He is for sure a player who can be used in almost every Bundesliga game. Thanks to his skill set, he may even look better at a club like Bayern who have a lot more possession than their opponents. In a 4-3-3, Cuisance can play as a right central midfielder, creating a lot for his team. In future, even a role as a deep-lying playmaker is possible. To fulfil such a role, Cuisance must improve his defensive abilities, but for sure he has a lot of potential, as our analysis has shown. It is absolutely possible that he might become one of the biggest surprises in this year’s Bundesliga.