It is rare for coaches to enhance their reputation in a season when their club gets relegated but Aurelio Andreazzoli did just that last season due to the exciting style of play his Empoli produced. The former Roma youth coach was swiftly appointed at Genoa to replace Cesare Prandelli and will oversee an interesting season at Stadio Luigi Ferrari. This tactical analysis scout report will provide a season preview of the tactics Andreazzoli will look to implement at Genoa.

Andreazzoli is an interesting coach with very clear and sometimes innovative ideas. That is extra interesting since he is 65 years old and hardly a new hopeful upstart. Last season, the man who led Empoli back to Serie A was first dismissed in November since his football, though attractive, failed to earn points. After his successor Giuseppe Iachini hardly fared better, Andreazzoli was reinstated in March. Empoli impressed again at the end of the season and came within a whisker of staying up but Andreazzoli had enhanced his reputation. Empoli were left to wonder what would have happened had they stuck with him for the entire campaign.

Andreazzoli was quite flexible with his tactics at Empoli, setting them in either a 4-3-2-1 or a 4-3-1-2 initially before opting for a 3-5-2 when he returned. That seems to be the shape he will begin the season with at Genoa. His football is based around aggressive, man-orientated pressing, innovative build-up ideas and vertical, diagonal passing. Let’s take a look.

Some clubs have a clear identity in terms of certain aspects of their play. Barcelona and Ajax have their passing triangles and Genoa certainly have aggressive man-orientated pressing in their philosophy following the recent reigns of Gian Piero Gasperini and Ivan Jurić. Therefore, it made sense for the club to appoint Andreazzoli given his commitment to aggressive pressing based on man-marking. Already, we have seen his ideas implemented at Genoa. The image below highlights Andreazzoli’s pressing setup.

This man-orientated nature of their pressing is prevalent across the pitch and it can potentially cause them issues if teams manage to break the press, as discussed below.

In the image below, I’ve highlighted the collective man-marking performed also within their own half. As such, Genoa are very much reacting to the movement of the opposition which carries with it some issues when up against better teams that can exploit their reactiveness. However, their reactive nature becomes proactive since they are so very uncomfortable to play against and teams will struggle with how to cope with their marking. A similar defensive approach has been used with great success by Atalanta over the last few seasons. 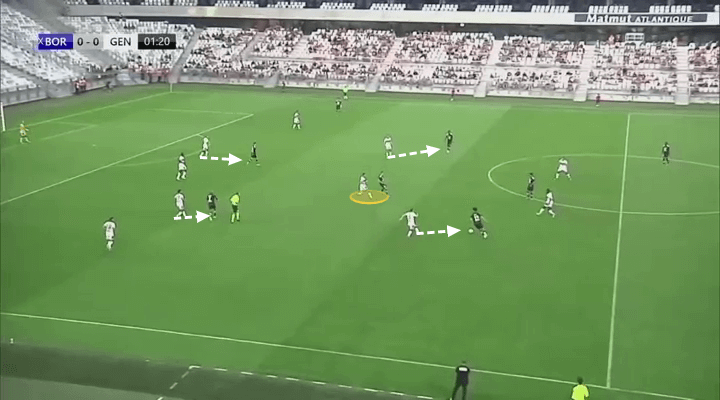 The heavily man-orientated defending is perhaps best illustrated with the actions of the centre-backs. They follow attackers deep into midfield if there is no possibility to pass them on to a midfielder. The two images below highlight the right-sided centre-back Cristian Romero’s defending in this system.

Genoa’s type of defending is intense, aggressive and difficult to play against. That will make life difficult for many Serie A teams. However, there are also some issues that need fixing ahead of the season starting.

The most intriguing part of Genoa’s pre-season matches is Andreazzoli’s innovative rotations when looking to build from the back. One rotation that will be interesting to follow is the one highlighted below where Andreazzoli rotates his centre-backs in an unusual manner. This approach was used in the friendly with Bordeaux and gave Genoa a really good method for progressing the ball from their goal kicks.

Criscito’s movement, along with the new goal kick rule, allowed Genoa to create a very interesting shape when looking to build from the back. Firstly, the goalkeeper became a natural part of a “back-three” since the two remaining centre-backs either side of the goalkeeper could receive the ball within the penalty area without marking. That created a numerical advantage in the first line.

Secondly, Criscito’s movement into midfield gave Genoa two passing options beyond Bordeaux’s first pressing line. Having two players capable of receiving there is extremely beneficial as the opponent must commit two players if they want to mark your players from goal kicks. They also play between the first and second pressing line of the opposition, creating positional superiority if they were to receive the ball.

Thirdly, the two central midfielders positioned themselves in an interesting fashion. Rômulo positioned himself between the next line, just in front of Bordeaux’s defensive midfielders. Thus, he was capable to receive centrally if the ball was progressed into Criscito or Radovanović. The other midfielder, Lukas Lerager (out of shot below), moved very high in the left half-space, presumably to be a second ball option should Genoa be forced long once the play was started.

One method to progress the ball that is a trademark move of Andreazzoli’s tactics is passing from deep positions along the ground to a striker who is then supported by midfielders making runs beyond him or in support positions. This is a way for the team to progress beyond the opposition’s midfield line and get players facing forward in the space between midfield and defence. The image below highlights this approach.

Andreazzoli might be one of Serie A’s oldest coaches but he has some very interesting build-up ideas that will continue to light up the Italian top flight. It will be exciting to see how successful the implementation of these will be in the league and if Genoa have the players to produce the football he wants.

Andreazzoli’s style is heavily angled towards vertical passing to progress quickly to the final third. The way to achieve this is diagonal passes into the central midfielders who are the main players tasked with moving the ball into the final third. There are two main positives with this style of passing. Firstly, if you manage to move the ball quickly through the thirds and break opposition lines while doing it, you will have reached the final third with them unorganised and probably defending with only the defensive line against your attack. Secondly, diagonal passing is a lot harder to defend against than straight or square passes since diagonal passes look to exploit space away from the immediate area around the ball-carrier and thus the nucleus of the defensive team.

The series of images below highlight a sequence from the Bordeaux game that shows how Genoa are adapting to Andreazzoli’s ideas.

The image below is another example of Andreazzoli’s preferred method for progressing the ball. On this occasion, Criscito finds Rômulo in the right-sided half-space and the midfielder can again turn into a huge space and thread a pass through to Pinamonti who goes close to scoring. The signs are that Genoa are already grasping these ideas; the diagonal nature of their passing from the back, the midfielders’ intelligence in picking up half-space positions behind opposition midfielders and the strikers providing runs into depth as soon as the midfielder receives the ball. 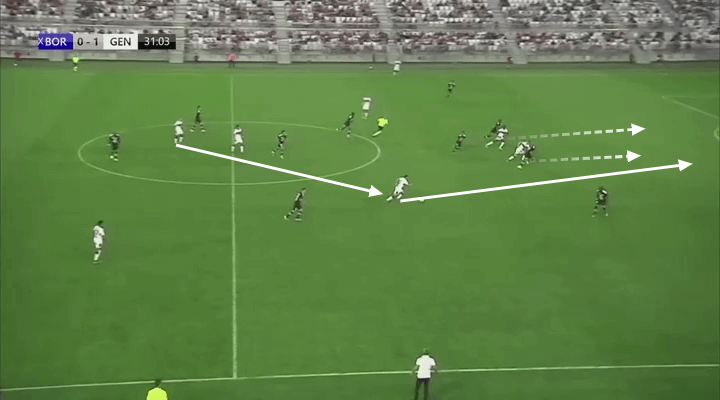 How do these tactics suit Genoa’s squad?

Andreazzoli forged a reputation last season as a great developer of talent as he oversaw the improvement in Ismaël Bennacer, Hamed Traorè, Rade Krunić and Miha Zajc, all of whom went on to secure moves to bigger clubs. This has probably also appealed to Genoa since it is a club with good young players as well as the business model to buy young players on the cheap, develop them and then sell them for large profits.

The Romanian goalkeeper Ionut Radu spent last season on loan with the Grifone and he has returned from Inter for another spell. He will likely continue as the number 1 in goal.

They seem a bit light in central defence given Andreazzoli looks likely to use a back-three. Cristian Romero’s return on loan from Juventus is vital to Genoa’s fortunes, while Cristián Zapata and Domenico Criscito will make up the rest of that back-three and both are good, experienced defenders. Davide Biraschi provides back-up but this is an area they will likely look to strengthen with only four senior options.

New signing Pawel Jaroszynski is an option at left wing-back, but that slot is likely to be filled with former Torino, Monaco and Newcastle left-back Antonio Barreca. He was highly rated at Torino and returns to Italy on loan after half a season in the principality and the other in England’s northeast. There are glaring weaknesses in the squad on the opposite side with Paulo Ghiglione the only natural option to play at right wing-back. He spent last season at Frosinone but only made nine appearances. This position must be strengthened ahead of the window closing.

Genoa look well set in central midfield with the aforementioned Lerager, Radovanović and Rômulo competing with Oscar Hiljemark, Sandro, Stefano Sturaro, Filip Jagiello, Francesco Cassata and the creative Riccardo Saponara. Additionally, Ajax’s Champions League semi-finalist Lasse Schöne also joined this week. They al bring different things but their differences give the coach some flexibility as he moulds his midfield. If forced to guess, I’d say Schöne will start as the defensive midfielder with Sturaro to his right and Saponara to his left, although it will take some adjusting to for Saponara who is naturally a number 10.

Up front, Andreazzoli can call on the experience of Goran Pandev and the youngsters Pinamonti, Andrea Favilli, Antonio Sanabria and Christian Kouamé. Kouamé, in particular, looks ready for a big breakthrough this season and fits Andreazzoli’s energetic style perfectly.

As it stands, Genoa must bring in at least one centre-back and a right wing-back. If they do, Genoa will have a very exciting squad with a nice blend of youth and experience that fits well with Andreazzoli’s tactics.

As this analysis has shown, Genoa will be an interesting team to follow in Serie A this season. Aurelio Andreazzoli brings a style of play with him that fits the traditions of the club, its squad and that will prove difficult for clubs in the division given the aggressive man-marking, the innovative build-up ideas and the vertical nature of their passing. After a few poor seasons, Genoa will be looking to push higher up the table this term. Let’s see if Andreazzoli is the man to give them that lift.