Freiburg finished last season in the 13th position in the Bundesliga but they already got knocked out of the DFB Cup in the round of the last 32 against Holstein Kiel. However, Christian Streich is heading into his ninth consecutive season at Freiburg with an incredibly good squad.

They just lost Florian Niederlechner who joined Augsburg and Vincenzo Grifo who was on loan at Freiburg and now returned to Hoffenheim. Although they did sign some interesting players at which we will look in this analysis.

This season preview in the form of a tactical analysis will also look at their whole squad and uses their pre-season friendlies against Stuttgart and Cagliari to predict how Freiburg might play this season.

The Breisgauer currently have got 30 players in their squad with an average age of 25.6 years. They signed the four players Luca Itter who is a 20-years-old left-back, Jonathan Schmid who already played for Freiburg between 2011 and 2015, the 19-years-old talent Woo-yeong Jeong from Bayern Munich and another South Korean called Chang-hun Kwon.

The combined fee for these four players is £12.6 million and on the other side, they just received £4.46 million for their sales. Considering this, it’s the first time since the summer transfer window in 2016 that their transfer record is negative.

However, they signed with Itter and Jeong two talents who can become great players in the near future. With Schmid, they signed one of the best right-backs in the Bundesliga and someone who can identify himself with the club. Kwon will need some time to adjust to the first German division but with 25 years he’s one step ahead of the prime of his career and could be one of the surprises this season.

Here’s Freiburg’s current squad and the players are ranked in each position after their current market value from the highest to the lowest:

Streich preferred in the pre-season friendlies, just like during the last season, a classic 4-4-2 with two defensive midfielders in the centre. Since they have several good centre-backs but not enough to play with a back-three throughout the season and in addition in each full-back position two good players, the back-four is a logical consequence. Furthermore, the Breisgauer have four quite talented strikers in their squad and that’s why a system with two players upfront makes sense.

Besides, all of their central midfielders are either defensive midfielders or number eights and they don’t have a real offensive midfielder in their squad. In light of this, a midfield-diamond wouldn’t work as good as a flat midfield-four. However, you have to consider that Streich prefers this system for years now and so he put together his squad with players who fit into his system and tactics.

Firstly, Freiburg try to build-up their attacks from the back with short passes. To execute this plan, the player in possession of the ball always must have at least one passing option. To create these passing options, Streich’s players need to get out of their opponent’s cover shadows and get into free spaces.

Even though the 4-4-2 formation has got some advantages which are essential for Freiburg as we will see later on when it comes to the build-up it has a drawback. Due to the two lines with four players and the two players up front, there are mainly horizontal and vertical passing lanes but to get out of cover shadows and have passing combinations diagonal passing lanes are important. Diagonal passes are harder for the opposition to defend against and so the Breisgauer almost never stay in their 4-4-2 system during the build-up.

Most of the time one of the two central midfielders positions himself a bit deeper and the other one stays in the centre since otherwise there would be a zone without any player of Freiburg in it. The dropping midfielder either forms a kind of a triangle with the two centre-backs as you can see in the shot below or creates a back-three with them.

Freiburg’s system looks during the build-up sometimes like a 3-3-2-2. However, these concatenations of numbers are always only a snapshot in time since a football game is so dynamic and the players are usually permanently moving.

So, in general, you could say that one central midfielder supports the two centre-backs who position a bit wider. The full-backs push forward, and the two wingers shift slightly inside the half-spaces to be able to do both if required: support the full-backs in the wide areas and help the central midfielder in the centre. The two strikers don’t always stay in their usual positions and instead sometimes drop deeper or drift outside. Although they never leave their position upfront at the same time. Considering this, when one striker is looking for free spaces in a deeper position or on the wing, the other one stays upfront to have at least one player up front.

Even though they try to build up their attacks with short passes from the back, they don’t hesitate to play a long ball if the opponents put pressure on them. Since they have two strikers up front and the two wingers who usually shift in, they have enough players up front to get the second ball. In the image below, their tall striker Petersen wins the aerial duel and the other striker Höler tries together with the two wingers to get in possession of the ball.

Since the wingers usually position in the half-spaces as already explained above, overlapping runs by the full-backs are a logical consequence. In addition, since they play with two strikers, there are usually enough receivers in the penalty box who could convert the crosses.

In the image below, the left-back Günter makes an overlapping run to get into a good position to deliver a cross. Meanwhile the striker Peterse and the opposing winger Kwon sprint into the penalty box since they know that Günter will deliver a cross. As soon as the left-winger Sallai plays the pass, he instantly also joins his two teammates in the centre to provide an additional option. 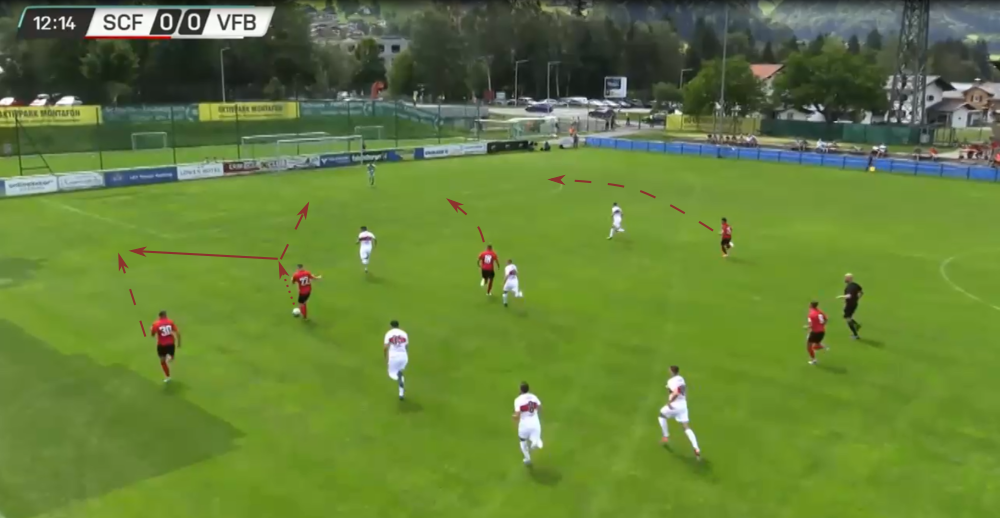 As in the example above shows usually at least one striker and the opposing winger are in front of the goal to receive the cross. It’s logical that a team which crosses quite often as Freiburg do always needs enough players who occupy the dangerous space in front of the goal. In the example below, the central midfielder Abrashi delivers a cross and both strikers, as well as both wingers, are in the centre. In light of this, there are enough players to convert the cross.

The use of 4-4-2 in different situations

As already mentioned, the 4-4-2 has got some disadvantages when it comes to the build-up and that’s why Freiburg’s players don’t stay in this system when they’re in possession. However, when the opposition is on the ball, they always stay in their 4-4-2. No matter if they use a low block, press high up the pitch or use a kind of a midfield pressing.

Quite often you can watch Freiburg sit back in their 4-4-2 and try to keep the space between the two banks of four as small as possible. Besides, the distance between the single players in the lines are also very short to avoid passes through the centre and they force their opponents into the wide areas where they aren’t able to apply as much pressure and goal threat as through the centre. In the shot below you can see their two narrow banks of four and the two strikers upfront. The only space for the opposition is in the wide areas.

However, Streich’s team is also able to attack their opponents a bit higher up the pitch and use a kind of a midfield pressing. In these situations, they put pressure at their opposition when they are approximately at the height of the halfway line. In the shot below, you can see their midfield-four and the two strikers Petersen and Höler upfront. Höler already starts to put slight pressure on the opponent and Freiburg once more stays in their 4-4-2. 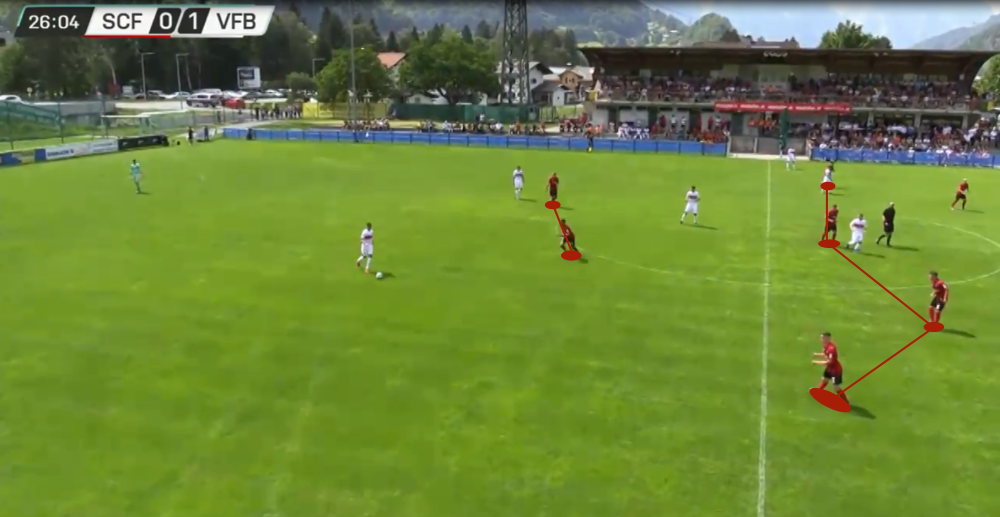 Even when they put pressure on their opponent high up the pitch, they always stay in their 4-4-2 formation. In these occasions, mostly the two strikers mark or press in at the centre-backs and the wingers push up to the full-backs of the opposition. As you see in the example below, their pressing is very man-orientated. 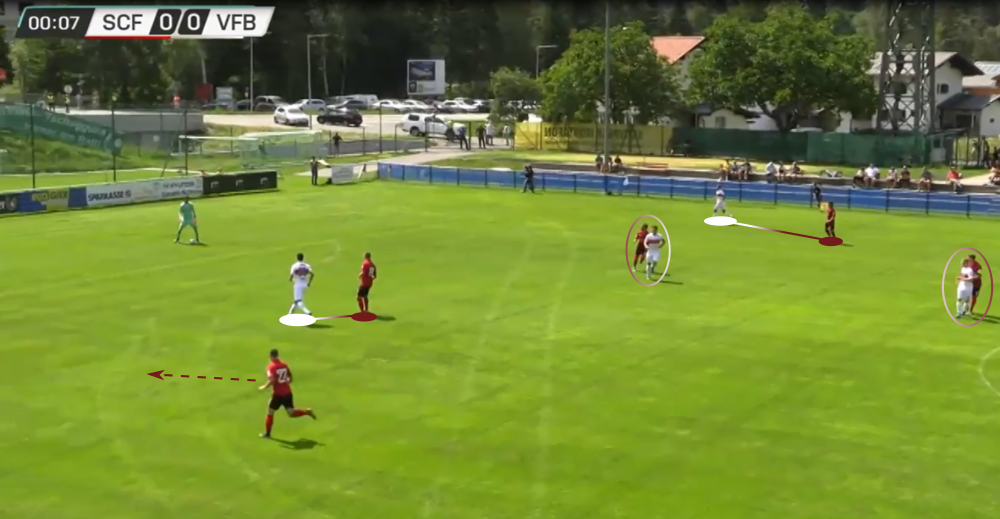 As this paragraph showed, the Breichgauer stay in their 4-4-2 system no matter at which height and moment they put pressure on the opposition. However, since this usually stays the same, their opponents could easily find a plan ahead of the match on how to create goalscoring opportunities.

Freiburg showed over the last three years that they don’t need to splash out the money and sign any big names to show successful football. This year they spent comparative no such a small amount of money and just lost Niederlechner and Grifo. Considering this, it will be interesting to watch how they will perform this season.

This scout report showed that they have several ways to defend and are able to build up their attacks from the back with short passes. It will be suspenseful to see if they can keep themselves out of the relegation battle and where they will finish the upcoming season.