After three impressive seasons, Sampdoria lost their highly-regarded coach Marco Giampaolo to Milan this summer. They also lost the hugely talented centre-back Joachim Andersen to Lyon. However, the mood in the club is still optimistic following the appointment of Eusebio Di Francesco. The former Roma and Sassuolo coach brings an exciting style of play with him to the Marassi and this tactical analysis will provide a preview of the tactics “DJ” will look to implement.

I will begin this scout report by looking at Di Francesco’s tactical template at Sassuolo and Roma to get a sense of what he wants from his team. Afterwards, I will look at how the players in Sampdoria’s squad suit these tactics.

Positional rotations when building from the back

Last year, I wrote about Di Francesco’s tactics in detail. Di Francesco wants his team to dominate the game by progressing the ball quickly. His style of play is often called calcio verticali, vertical football, and forces players to play forward if there is an opportunity to do so. What stands out about his preferred method of build-up play to progress the ball is his belief in positional rotations. These rotations look to destabilise the opponent’s defensive shape and create gaps for the creative attackers to exploit.

Di Francesco talked about the reason behind these rotations, specifically the wingers’ movements, in an excellent interview with The Coaches’ Voice:

“I would want him to come inside to have the ability to go and receive the ball between these two players (wing-back and central midfielder), with either the midfielder going wide or the full-back coming inside or pushing up, providing whoever is carrying the ball with two solutions”

Thus, Di Francesco wants to create multiple passing options for his deeper players to facilitate quick and clean ball progression from the back. By rotating players, Di Francesco aims to create free men between the lines from where they can go and hurt the opposition when they are unorganised due to the rotation of “DJ’s” players. He also has interesting ideas on how to progress beyond the defensive line, with one of his most used methods explained below.

These rotations are a trademark method of Di Francesco’s tactics and have been used at both Sassuolo and Roma.

Di Francesco also needs a striker who can participate in the build-up play and function as a reference point for the midfielders. We often see the defensive midfielder thread passes through to the striker who will then look to lay it off to onrushing midfielders, as seen below. This is a way for his team to beat the midfield line of the opposition and create forward-facing players between the lines. Edin Džeko played this role brilliantly for Di Francesco at Roma while Grégoire Defrel fulfilled it well at Sassuolo. Fabio Quagliarella will undoubtedly be the man given this responsibility at Sampdoria.

The importance of wingers

No tactical analysis of Di Francesco’s style would be complete without looking at his love for wingers. Wingers are crucial to the way Di Francesco sees the game, and even when he has used a 3-4-2-1, the wide players have had very specific roles. He normally sets up with a left-footed winger on the right and a right-footed on the left. The reason for this is to naturally get them on their preferred foot when they move inside.

In that interview with The Coaches’ Voice, Di Francesco talked about how happy he was with the way Stephan El Shaarawy “attacked the space very well and that’s what I want from my wide players”. It seems clear, therefore, that attacking the space in behind is one key role for a Di Francesco winger. We can see this preference in the way his Sassuolo and Roma have attacked. The wingers have always been looking to make runs into space, such as Cengiz Ünder did for his goal at Shakhtar in the below image.

The second is coming inside to find space as part of the rotations discussed above. Again, Di Francesco elaborated on why this is in important in that The Coaches’ Voice interview:

“A winger in my consideration, especially according to how I see the game, has to have the ability to receive the ball between the lines to become more decisive while at the same time moving as close to goal as possible.”

The below image, highlighting Domenico Berardi (yellow) and Matteo Politano (white), shows the preferred positions Di Francesco has for his wingers when building attacks. The full-backs always look to get forward into the vacated space out wide.

Thus, moving inside to become a passing option in the half-spaces is the other key role for Di Francesco’s wingers. Through analysis of Di Francesco’s time at Sassuolo and Roma, it is easy to spot the importance of his wide players. At Sassuolo, Berardi was his key man and the one player most of the attacks went through. At Roma, Diego Perotti, Stephan El-Shaarawy and Ünder were all given the responsibility to create and score goals from the wide areas. Additionally, the wingers must combine with the full-backs to create crosses into the box since crossing is the most used method of Di Francesco’s teams to create chances. When the ball enters the wide areas, his teams look to get at least three players into the box to attack the cross. An example of this can be seen in the goal scored below. 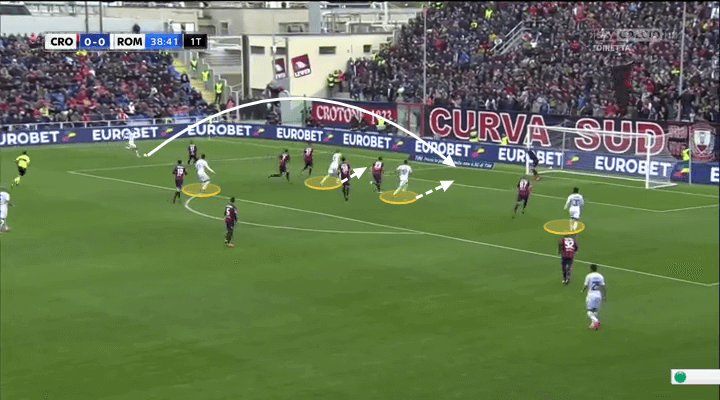 Clearly, wingers and attacking the wide areas are crucial to Di Francesco’s philosophy and it will be interesting to see how this will work at Samp who have been very centrally-focused under Giampaolo.

Di Francesco’s teams are aggressive in the way they progress the ball and this aggressivity is mirrored in the way they press. He usually wants his team to press high and they do so in a very man-orientated manner. Regardless of the opponent’s shape, Di Francesco uses man-orientated pressing and adjusts his pressing scheme to fit the opponent’s build-up structure. We can see this in the examples below.

As we have seen, Di Francesco changes his pressing scheme based on the opponent’s shape but the principles remain the same; aggressive, man-orientated pressing. But how will this work with a Sampdoria squad used to the exact opposite?

There are some similarities between Giampaolo and Di Francesco. They want to build from the back, they like to press somewhat high and they believe in specific movements that they repeat continuosly with their players. Largely, however, there will be a huge change for Sampdoria’s players. The biggest change will be seen defensively where the transition from Giampaolo’s strictly positional defending to Di Francesco’s man-orientated approach will take time to implement. It would not surprise me to see Samp concede a lot of goals initially as they come to terms with the new mentality and structure.

There will also be a tweak in possession with the more methodical, combination-focused approach of Giampaolo in central areas where they overloaded with the 4-3-1-2 shape replaced with Di Francesco’s aggressively vertical passing style. We have also learned about Di Francesco’s love of wingers and attacking the wide areas, and Sampdoria never used wingers under Giampaolo’s three seasons with him always fielding a 4-3-1-2.

How does Sampdoria’s squad fit these tactics?

Despite the loss of Andersen, Sampdoria look well stacked in central defence. Omar Colley is still there, and his blend of aggressive defending, physicality and passing should fit Di Francesco’s tactics well. The added fact that he is left-footed also gives the defence a nice balance when building from the back. Alex Ferrari only played six times in Serie A last year, but that included the final five games when he impressed. The 24-year-old highlighted his quality by averaging 6.02 interceptions, 12.5 ball recoveries and winning 66.7% of his defensive duels.

Sampdoria have also signed well by bringing in Jeison Murillo and Julian Chabot. Murillo is an excellent defender who has spent the last few seasons at Inter, Valencia and Barcelona. His signature is a real coup for the recruitment team at Sampdoria. His aggressive defending will be very welcome to Di Francesco who likes proactive defenders who are able to step out of the defensive line when needed. Chabot is an interesting addition, a left-footed German defender who joins from Groningen for just €3.5m. He looks well-suited to Di Francesco’s tactics since he averaged 9.73 long passes and 7.58 passes to the final third for Groningen, suggesting a progressive nature in possession. His defensive stats are impressive too, with Chabot averaging 6.05 aerial duels, 6.38 interceptions, 13.12 ball recoveries whilst winning a whopping 74.5% of his defensive duels. These four defenders make up an interesting quarter for Di Francesco to choose from.

Giampaolo always played with three central midfielders and an attacking midfielder which means Sampdoria’s squad is full of central midfielders. Actually, there are nine of them all vying to start. Albin Ekdal is expected to start the season as Di Francesco’s defensive midfielder, although Ronaldo Vieira and Édgar Barreto will push him close. Barreto has probably lost the energy needed to be one of the attacking midfielders with two out of Dennis Praet, Karol Linetty and Jakub Janktu the main contenders for those roles. New signing Morten Thorsby will challenge them though, as will Valerio Verre, who scored five goals playing upfront in Samp’s opening friendly this summer.

There is a distinct lack of wingers in the squad with no natural wide player available. Gastón Ramírez has the intelligence needed to play off the right now that his number 10 role doesn’t exist anymore whilst Manolo Gabbiadini played there rather than upfront (where midfielder Verre played) in that first friendly, suggesting he might be an option to start there. On the left, Gianluca Caprari probably has the best chance to start with competition from new Argentine attacking midfielder Gonzalo Maroni, who would be an exciting option given his technical ability and speed. This is an area they need to strengthen, which makes links to Simone Verdi and Emiliano Rigoni understandable.

Fabio Quagliarella was the Serie A top scorer last year and will start as the sole striker with Gabbiadini, Caprari and Marco Sau as understudies. At the back, Sampdoria have signed Emil Audero permanently after a superb loan spell last season and he will be the number one goalkeeper.

Sampdoria might have lost a brilliant coach and tactician in Giampaolo, but they have also replaced him with the kind of motivational, inspirational coach to help this talented group of players improve their performances. As this season preview has shown, Di Francesco brings with him an energetic and aggressive style of play that will suit many of the players and he is the sort of character to connect quickly with the fans. If he is given a few more signings, preferably at least one really good winger, then Sampdoria can look forward to an exciting season.