The Netherlands reached the final of the FIFA Women’s World Cup but the United States proved too strong for the Oranje. However, a silver medal means the small country has now earned two straight medals after winning the 2017 European championship. One key component of both sides has been the midfielder Jackie Groenen. This tactical analysis scout report will profile her as a player and also look forward to how she might fit into her new club Manchester United‘s tactics.

Jackie Groenen made her senior debut at SGS Essen as a 16-year-old in 2011 and then moved on to FCR 2001 Duisburg before ending up at Chelsea in 2014. After 20 WSL appearances for the Blues, Groenen returned to Germany and FFC Frankfurt in 2015 where she would spend the next four years. In May, Manchester United announced the signing of Groenen ahead of their first-ever WSL season. 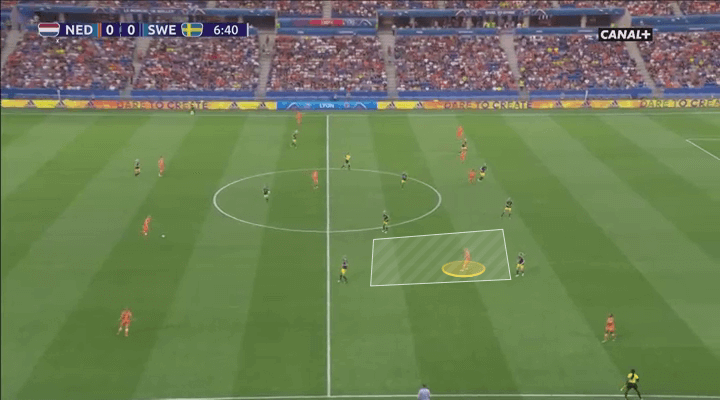 Groenen is a fantastic defensive player. She has an energy and intensity in her defensive actions that are rarely seen among midfielders. At the World Cup, she averaged 5.35 interceptions and 8.41 ball recoveries, very good numbers. The main reason for her efficiency in the defensive side of the game is her energy. The image below highlights her energy when closing down opponents. The Swedish midfielder has just received the ball and looks down for a second. Groenen seizes the opportunity and sprints towards her opponent and pressures her to a mistake which sees the Netherlands regain the ball. 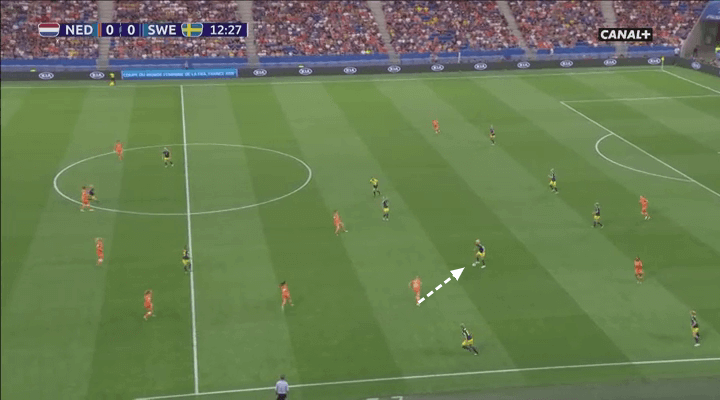 Groenen is also very clever in terms of her positioning. She often holds her position to prevent a central pass, seemingly inviting the pass to go wide only to step in and intercept the ball. This can be seen in the image below as Groenen anticipates the pass and wins the ball. 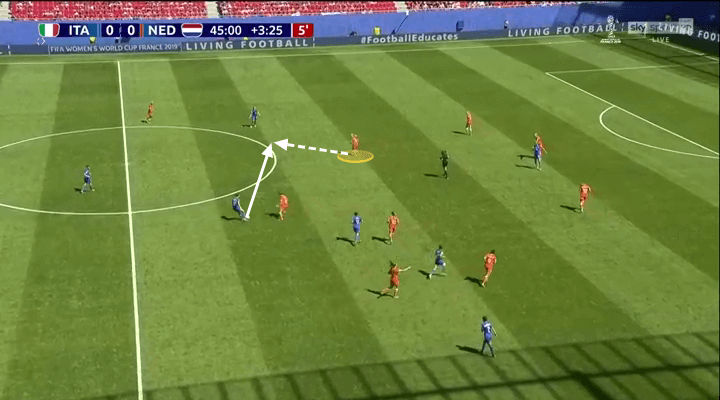 Groenen’s ability to win the ball becomes more important for her team since she can also use it well when she wins it. The two images below highlight this. In the first one below, Groenen holds her position in midfield and intercepts the forward pass. 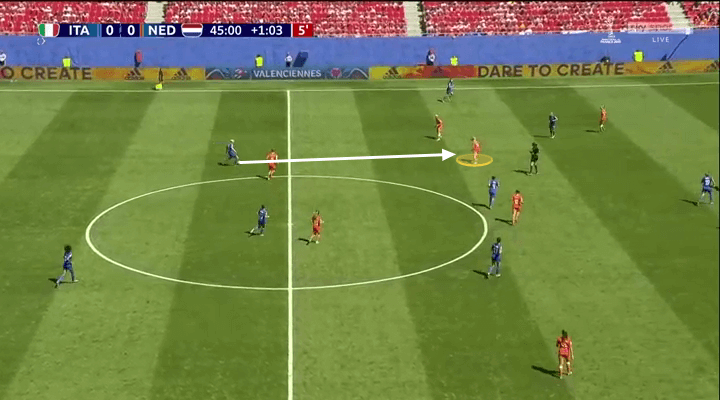 She then progresses up the pitch with the ball and leads the Dutch counter-attack before slipping the ball through for her teammate to create a great chance for the Netherlands. 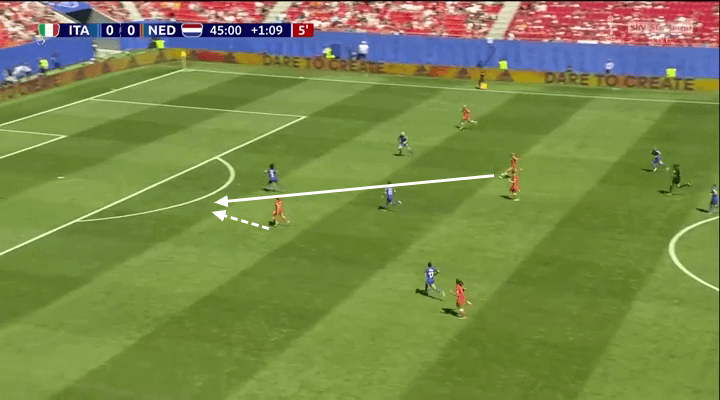 Groenen’s intensity and energy can also be used to great effect if the team presses high up the pitch. She can then leave her position in midfield to close down defenders aggressively. This can be seen in the image below as Groenen presses the Swedish left-back and wins a throw-in. 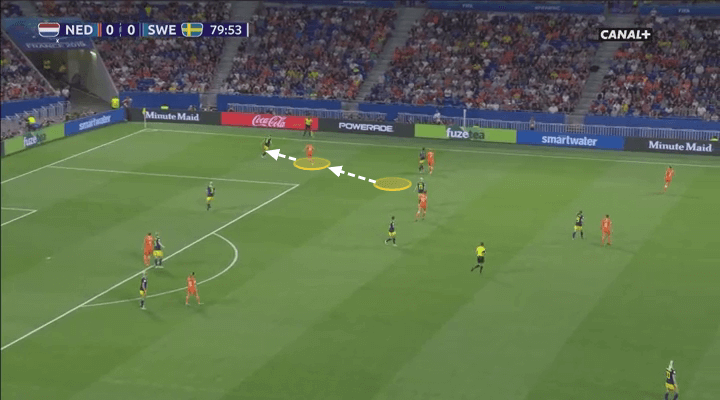 All in all, Groenen’s defensive contribution is huge and it seems she will fit in nicely in Casey Stoney’s tactics at Manchester United as they will look to make the transition up to the top-flight quickly and will need players who are strong defensively as they adapt to a higher level.

Clever use of the ball

Groenen might be good defensively, but she is also a true Dutch midfielder with the ball at her feet. She’s a technical and creative midfielder who always wants to get on the ball and move it forward. One of her trademark passes is the one highlighted below. The right-winger makes a diagonal run into depth and Groenen threads the ball through the defence, beating eight players with one pass on this occasion. 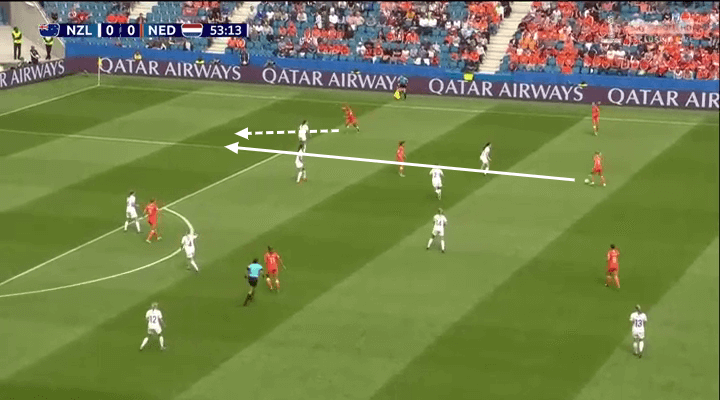 As mentioned, Groenen is very progressive and wants to move the ball forward. We can see this in her passing as she always looks for forward passes that can hurt the opposition such as the one highlighted below. 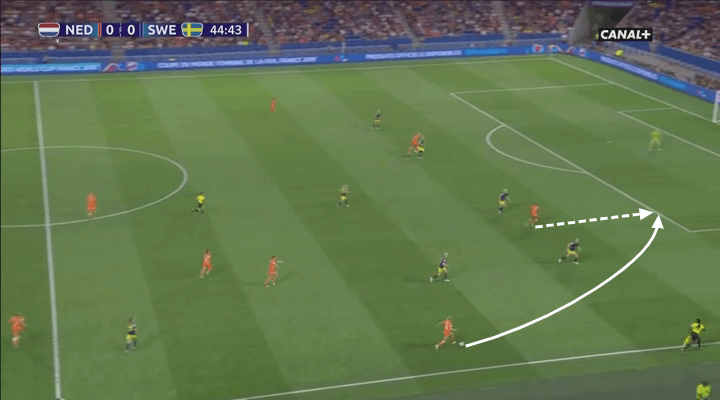 Despite usually playing in a quite advanced position, Groenen can also drop in at the base of midfield and construct attacks. Her main strength here is her vision and ability to organise possession. The image below highlights this. She has dropped into defensive midfield and is about to receive the ball. Prior to receiving it, she scans her surroundings and identifies the four possible passing options (including the return pass). 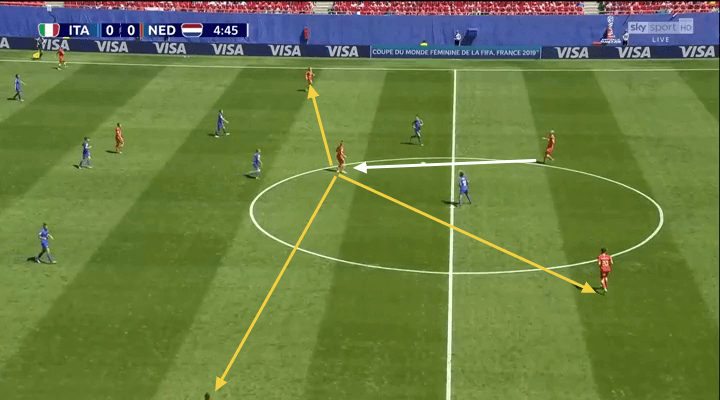 Added to her passing ability, Groenen is also very skilful and a quality dribbler. In fact, she averaged 2.29 dribbles for the Netherlands in France. This highlights her ability to receive the ball in tight areas and dribble her way out of pressure. A fun fact about Groenen is that she is ‘obsessed’ with Johan Cruyff with him being the reason for her wearing number 14. It should be no surprise, then, that she often turns out of difficult situations using his most famous move, the Cruyff turn. This can be seen below as Groenen ‘Cruyffs’ her way out of pressure in midfield. 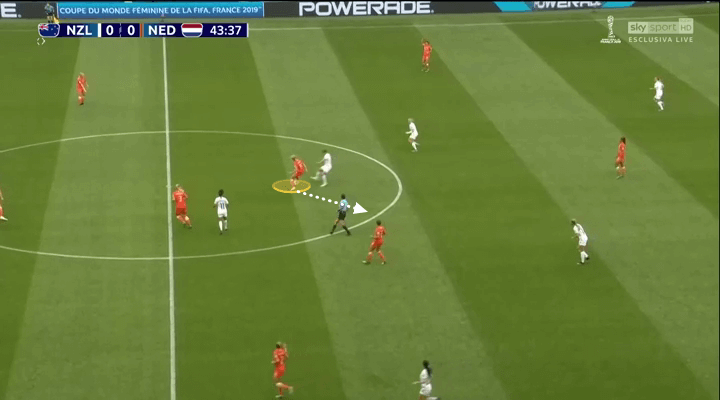 Groenen highlighted her quick-thinking with a sublime piece of skill against Sweden in the semi-final. This play is highlighted below. She first made a run diagonally towards the corner flag and received the ball. As she took the defender with her, space naturally opened up in the penalty area. The Dutch right-winger realised this space and attacked it. Groenen, without any real options, then produced a stunning back-heel to release the winger and create a potentially great opportunity to score. This highlights her creativity and smartness around the penalty area. 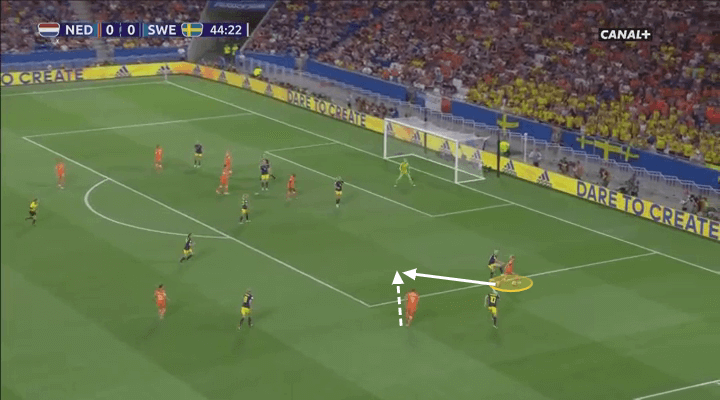 As you may have noticed by now, this tactical analysis scout report has highlighted that Groenen is very smart. This is further demonstrated by her movement out of possession. One area she often drifts into when in search of space is the right-wing. We can see this below as she moves out of the centre to receive the ball in plenty of space in the wide area. 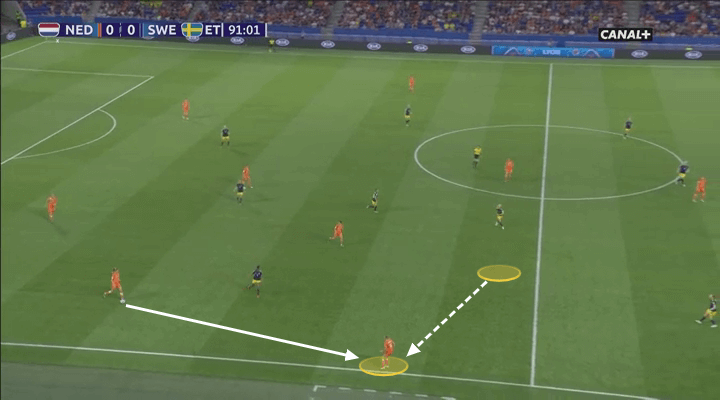 The image below further demonstrates this spatial intelligence. In the below scene, Groenen realises that the movement of the Dutch winger towards the ball has dragged the left-back away from the ball-near centre-back, thus opening up space between the two defenders. She makes a run into this space, receives the ball from the right-back and leads a Dutch attack from the right. 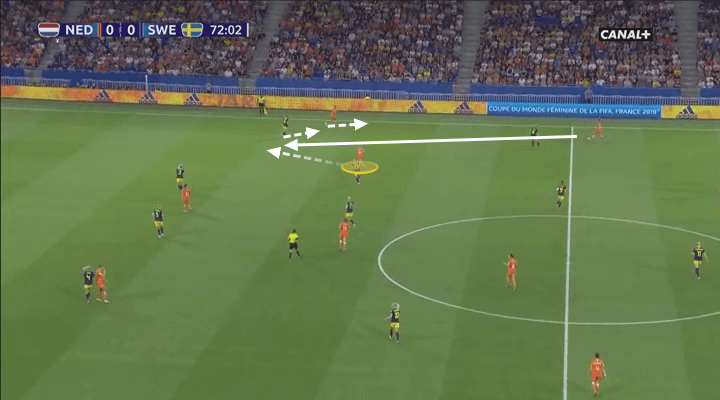 Groenen’s most obvious contribution to the Netherlands run to the final was her winning goal in extra-time against Sweden in the semi-final. The build-up to that goal, a splendid low drive, is highlighted below. As midfielder Daniëlle van de Donk plays the ball forward to the striker Vivianne Miedema, Groenen realises that the Swedish centre-back has followed Miedema into midfield, vacating space in the defensive line in the process. When Miedema lays the ball off to Groenen she takes a touch into that space before firing her shot into the goalkeeper’s right corner and sending her country into the World Cup final. 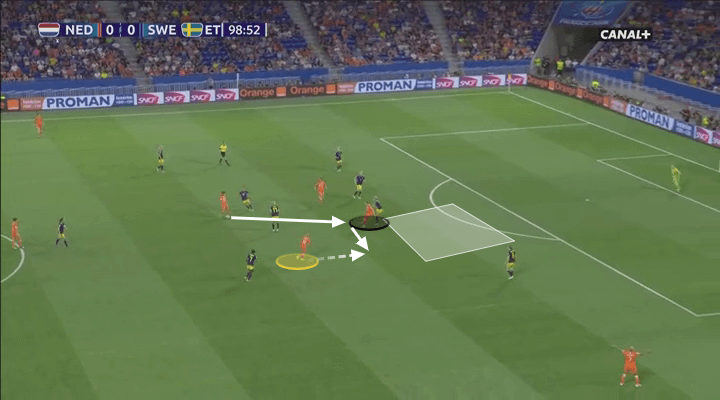 Under Stoney, Manchester United normally play out of a 4-3-3 formation and look to dominate games with their progressive passing. Groenen looks like a fantastic fit for that system and that approach. With her complete skillset, Groenen may turn out to be the best signing any club in Europe has made this summer.

As this analysis has shown, Jackie Groenen is a superb central midfielder and sure to strengthen Manchester United in their first WSL season. She uses the ball well, defends with intensity and smartness and her movement and positioning always have thought behind them. Therefore, Groenen will fit in well in head coach Casey Stoney’s tactics. After shining on the international stage, Groenen will now look to set the WSL alight too.