Under Brad Friedel, New England Revolution finished eighth in the Eastern Conference in the last MLS season. The awful start in his second season was evident as New England suffered eight losses in 12 games. There were major defeats likes 6-1 against Philadelphia or 5-0 by Chicago Fire. Therefore, when the club sacked Friedel it was no surprise.

As his replacement, the club chose one of the most successful coaches, Bruce Arena the five-time MLS Cup champion. He took over the head coach position in May. Since Arena was appointed, New England Revolution have been doing great as they collected some big scalps such as beating LA Galaxy, Houston Dynamo, and drawing with Philadelphia Union and DC United.

Now, we see New England returned to being an interesting side once again as they display some great performances. This tactical analysis focuses on Arena’s New England and the tactics that now look pretty effective.

This scout report aims to show the improvement in New England’s performance and tactical changes. Thus it is a logical step to look into the numbers what it tells us.

Now, let’s investigate these values in those nine games that New England played under Bruce Arena. They have scored 1.8 goals per match whilst only conceding an average of 0.8 goals per match. Of course, this looks much better, therefore the improvement is evident.

As a base point of this analysis, it is important to identify the structure that the current team is using. In the case of New England, they form a 4-2-3-1 shape which morphs into a 4-4-2/4-4-1-1 structure against the ball.

However, recently coach Bruce Arena tweaked it and formed it that probably more fit to his tactics thus New England deployed a 4-3-3/4-3-1-2 formation lately. It was evident from the Houston game and looks like it is a permanent change in their tactics.

New England usually form a medium block but often press high up the pitch. Out of possession, the wingers Juan Agudelo and Cristian Penilla drop next to the double pivot.

Against the ball, the goal is to force the opponent wide. To achieve this, the striker adds central protection but attempt to press with a curved run to block the passing lane between the centre-backs. Meanwhile, the wingers are responsible for pressing the full-backs and one player marks the opposite midfielder. 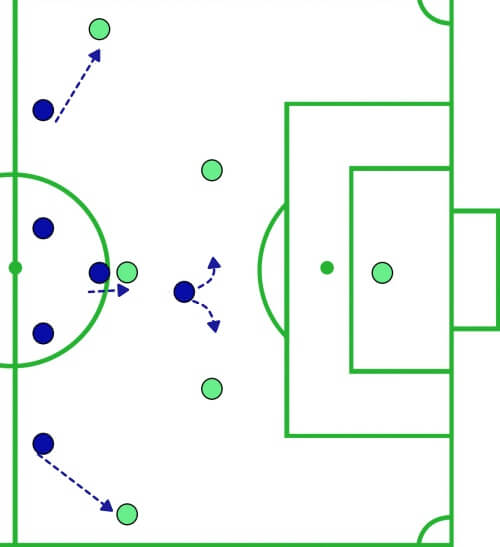 In their medium block, the shape is a bit narrow to protect the passing lanes. In order to close down the wings frequently see them shifting side to side. For example, in this situation, New England’s second line shifted to the left-hand side. The left-winger (Penilla) needs to be quick enough to close down the full-back on the ball. Also, Carles Gil moves there to mark the nearby midfielder whilst Wilfried Zahibo and Luis Caicedo adjust their positions by moving to the half-space to give support to Penilla who pushed out diagonally to press. 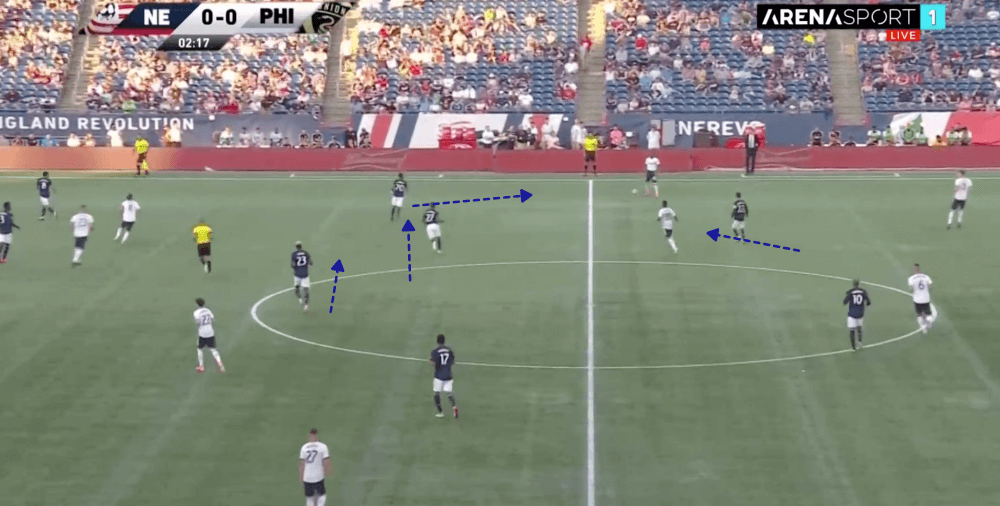 With this mechanism, they can close down the whole width of the pitch and prevent the progression. Therefore, the opponent needs more than simple ball circulation in order to build up. Otherwise, New England often traps the opponent next to the touchline to force them back or for a risky long ball where they could win it back.

Moreover, they use a man-oriented manner which could be highly vulnerable against lots of movements. Here is a common scene where due to the strict man-marking the opponent’s striker drag the New England’s centre-back out of position. Then the same striker tried to fill the vacated space by creating one v one speeding duel. If the opponent has an advantage in physical skills the centre-back could be in big trouble.

Of course, this weapon could be utilised in several ways. Philadelphia showed some of them. Firstly, by dragging the full-back out of position is an effective way to create space in the opposition defensive shape.

Here, Philadelphia’s full-back occupied fairly deep – compared to the left-back -, and when the ball sent to him, it dragged the New England’s full-back out of position. In result, the nearby midfielders (Alejandro Bedoya) could exploit the vacated space, however, the Zahibo tracked this run pretty well. 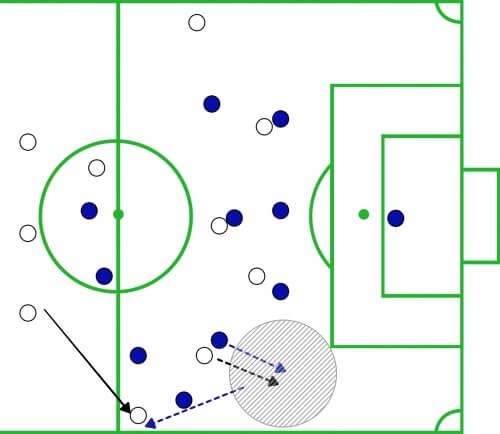 Here is another occasion from the final stage of the game, Philadelphia did the same but Zahibo did not pay attention that much as he did earlier.

Also, there were occasions, where the opponents showed ways to beat their press. All of them due to their man-oriented manner.

For example, as the Haris Medunjanin dropped between the centre-backs, it manipulated the strikers positioning. Made them occupy narrower thus create more space for the centre-back in the left half-space. 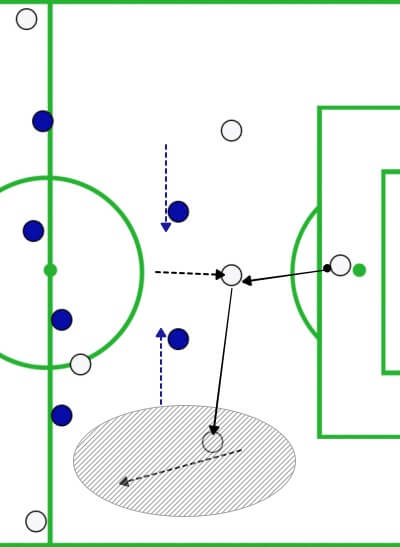 In the recent matches, Arena started to deploy a 4-3-1-2/4-2-1-3 formation which was evident in their pressing sequences. As you may see, in this situation against Houston Dynamo, New England blocked the centre with the two attackers and Gil marked Dynamo’s deepest midfielder. This forced the ball wide from the centre-back towards the full-back. As the second line shifting, they were able to close down the full-back.

Almost the same formation against DC United, however, due to DC’s three at the back setup, New England often formed a 4-2-1-3-ish shape. Again, Gil position depended on the opposition midfielder as he tasked with marking the deepest central midfielder.

Furthermore, there was another change compared to the first few matches under Arena. The first line was different since he employed Juan Fernando Caicedo in the centre-forward position and Teal Bunbury moved to the right-wing.

More physicality and height upfront, it has advantages. Right before the first goal, there was an airball towards Caicedo who played it forward to create a one v one duel between the DC United defender and Bunbury. Bunbury was able to win the ball and score.

Issues of the new formation

Of course, the narrower setup has weaknesses that the opponent could exploit. Once the ball was played wide, the midfielder had to move out to close down the opponent instead of the winger. 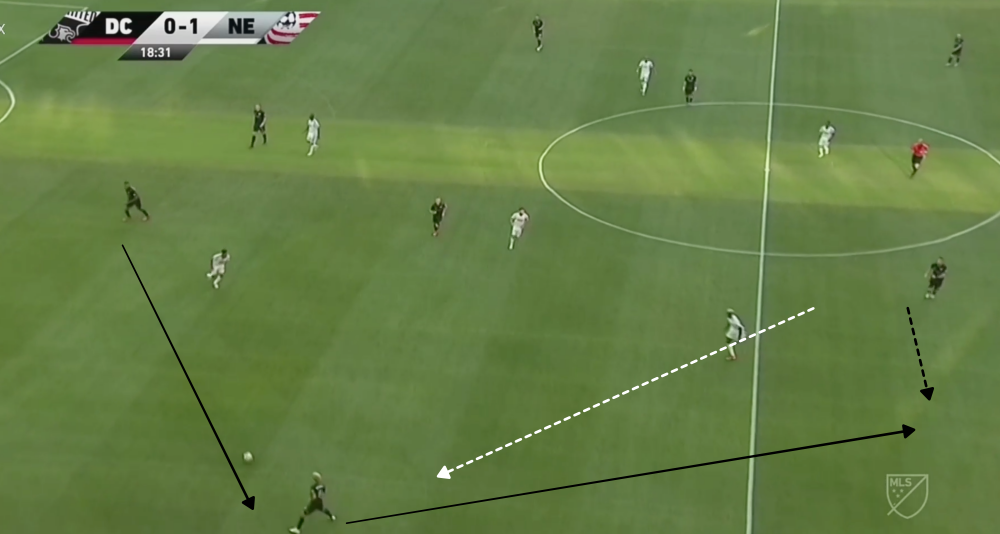 For example, in here, DC United passed behind the Revs’ first line of the press with a diagonal ball and Zahibo on the rush to close the opponent down. However, as you may see, the distance is too far to effectively do it. Therefore, the ball carrier had time to play the ball forward and advance through quick one-twos.

Moreover, since Bunbury occupying in the right half-space instead of a proper winger, the opponent could play the ball behind New England’s press with more ease.

Despite Bunbury using cover shadow to block the pass route to wide, the ball carrier was able to pass to the teammate with an airball. Then they could exploit the space behind Bunbury, although he tried to press as he dropped but it was late. 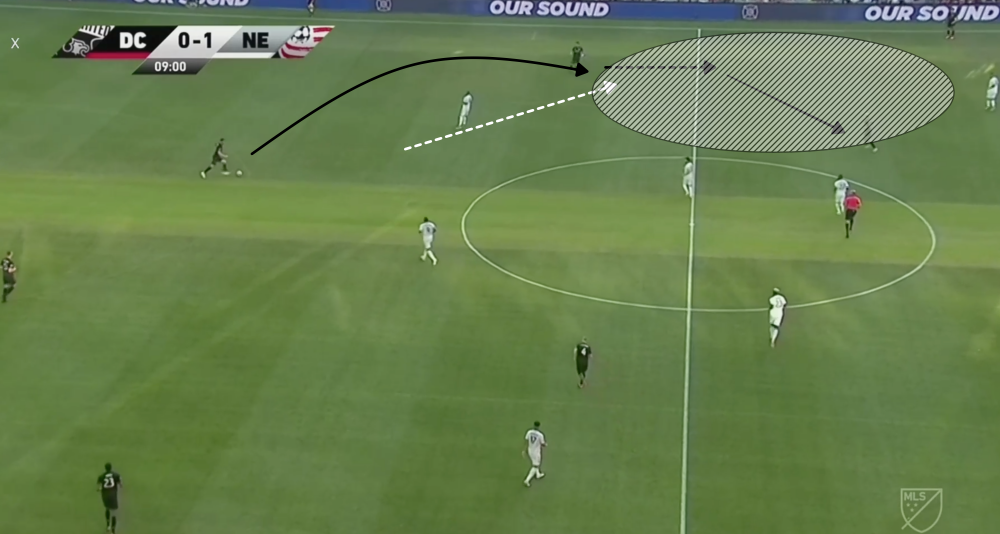 All that said, a new coach arrival usually generates a rise in team performance but this improvement usually only holds up a couple of matches, then usually in six matches, it returns to the average. However, in the case of New England Revolution and Bruce Arena, it looks like a different case. They are still doing well, although there is a long way to go in this MLS season.