Norwich City have not been idle following their promotion to the Premier League for the 2021/22 season. Having managed to hold onto Emiliano Buendia for so long, they finally let him go for a club-record fee to Aston Villa, and have already brought in a replacement in the form of Bosnian attacker Milot Rashica. The 25-year-old Kosovan has been signed from Werder Bremen, for a reported fee of €11 million + €4 million in potential bonuses, which is quite a reasonable fee for a player who, in the words of the Guardian’s Nick Ames, possesses ‘Champions League quality’, and could have easily moved to a bigger club in England. Rashica is not a direct replacement for Buendia by any means, even though he is likely to take the Argentinian’s spot on the right flank, and in this scout report, we will try and understand his playing style, strengths and weaknesses to see where he could fit into Daniel Farke’s Norwich City side in the Premier League.

Rashica is 25 years old, weighs 73 kg and is 5’10” tall. The Kosovan is capable of playing across the frontline, having played on both flanks as well as centrally for both Werder and the Kosovo national side in recent seasons. Indeed, the majority of his playing time came as a striker for Werder last season, and while Norwich City have not signed him as a backup or replacement for Teemu Pukki, this sort of flexibility is a good addition to the Canaries’ squad. 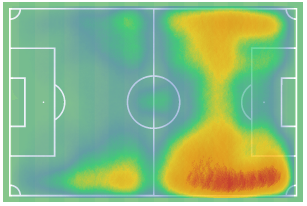 This is Rashica’s career heatmap, and we can see how the majority of his playing time has come on the right flank, but he has also played down the left and centrally on occasion. The Kosovar is a pacey, direct winger who will try and run in behind whenever possible, which makes him a different sort of player to Buendia, who is more of a playmaker. Thus, Norwich fans cannot expect the same level of output from him, especially in terms of creativity, as Rashica is unlikely to be the player making incisive passes to the attackers; he is far more likely to be the player attempting to get on the end of those passes.

One of his biggest strengths is his ball-carrying and dribbling ability – Rashica is quite adept at running at pace with the ball at his feet, and he is also able to take defenders on and beat them in 1v1s. 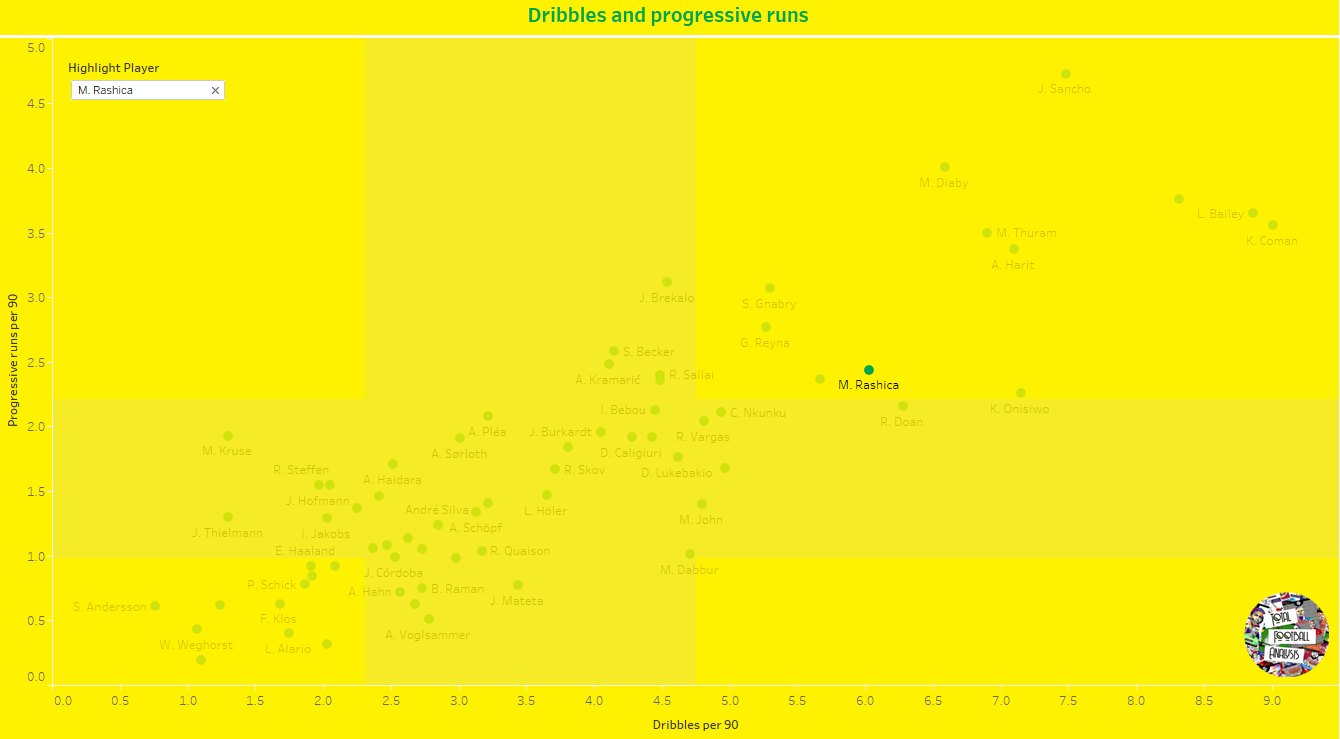 This scatter plot looks at all Bundesliga attackers, both central and wide, from last season who had played at least 1000 minutes. We can see how Rashica was in the top quartile for both dribbles per 90 and progressive runs per 90, and this is an excellent reflection of his primary skill-set: carrying the ball up the field at pace, and engaging defenders in 1v1 situations. He had a decent success rate of 46.4% for dribbles as well in all competitions, and this is a trait that will be extremely useful for Norwich, as it will help them move up the field quickly, especially against sides where they need to sit back and counter-attack. While Norwich were one of the most ‘progressive’ sides in the Championship, there will be more matches in the Premier League where the Canaries will have to play on the counter-attack, and in that sense, adding a direct and pacey attacker like Rashica makes a lot of sense.

Given that Rashica has been used a lot as a central attacker over the last couple of seasons, he has usually been attempting to make runs in behind the defensive line, using his pace to get away from opposition defenders and getting into position to shoot. 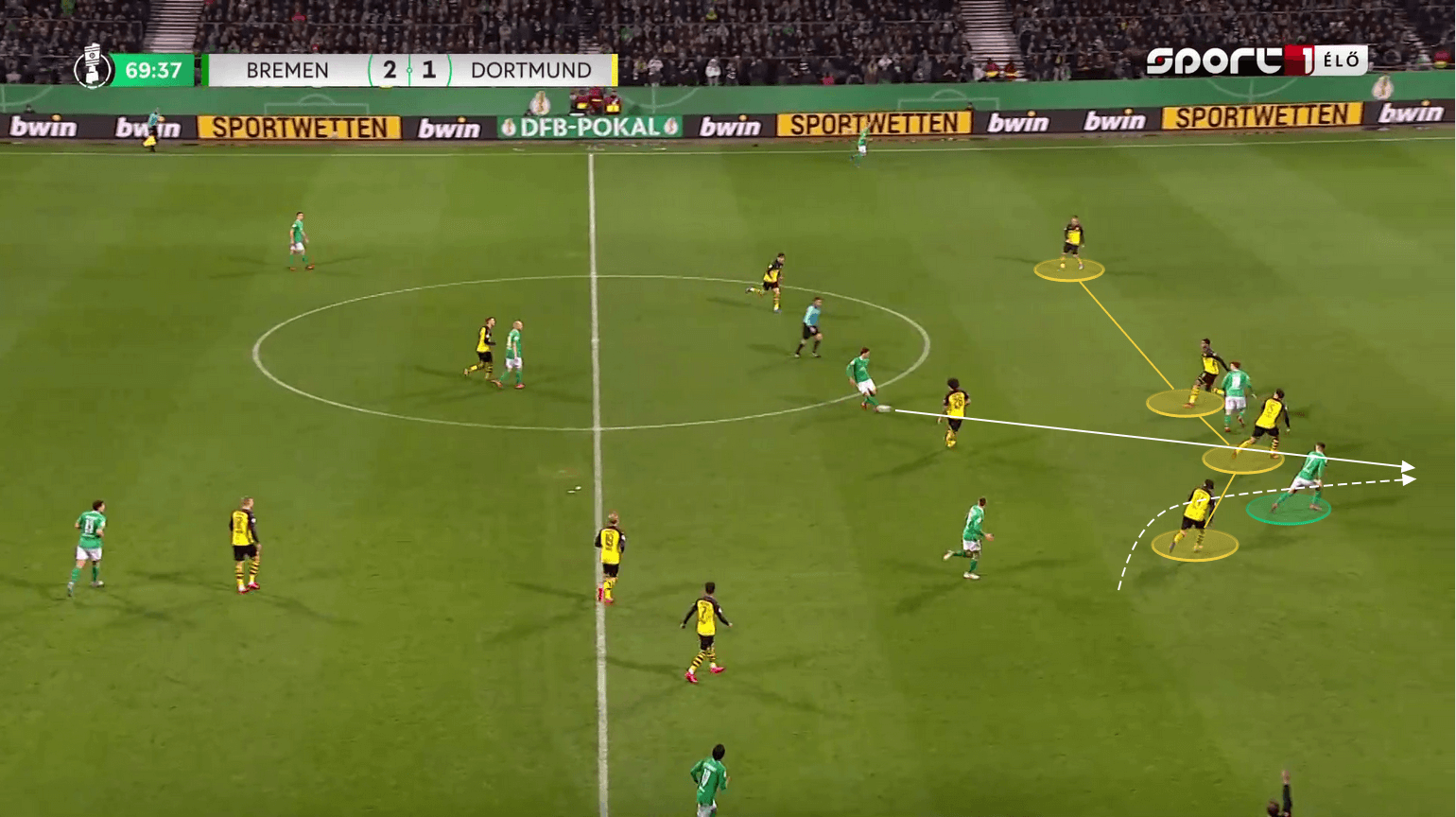 This is a great example of the type of run we can expect to see from Rashica, especially when he is used centrally. 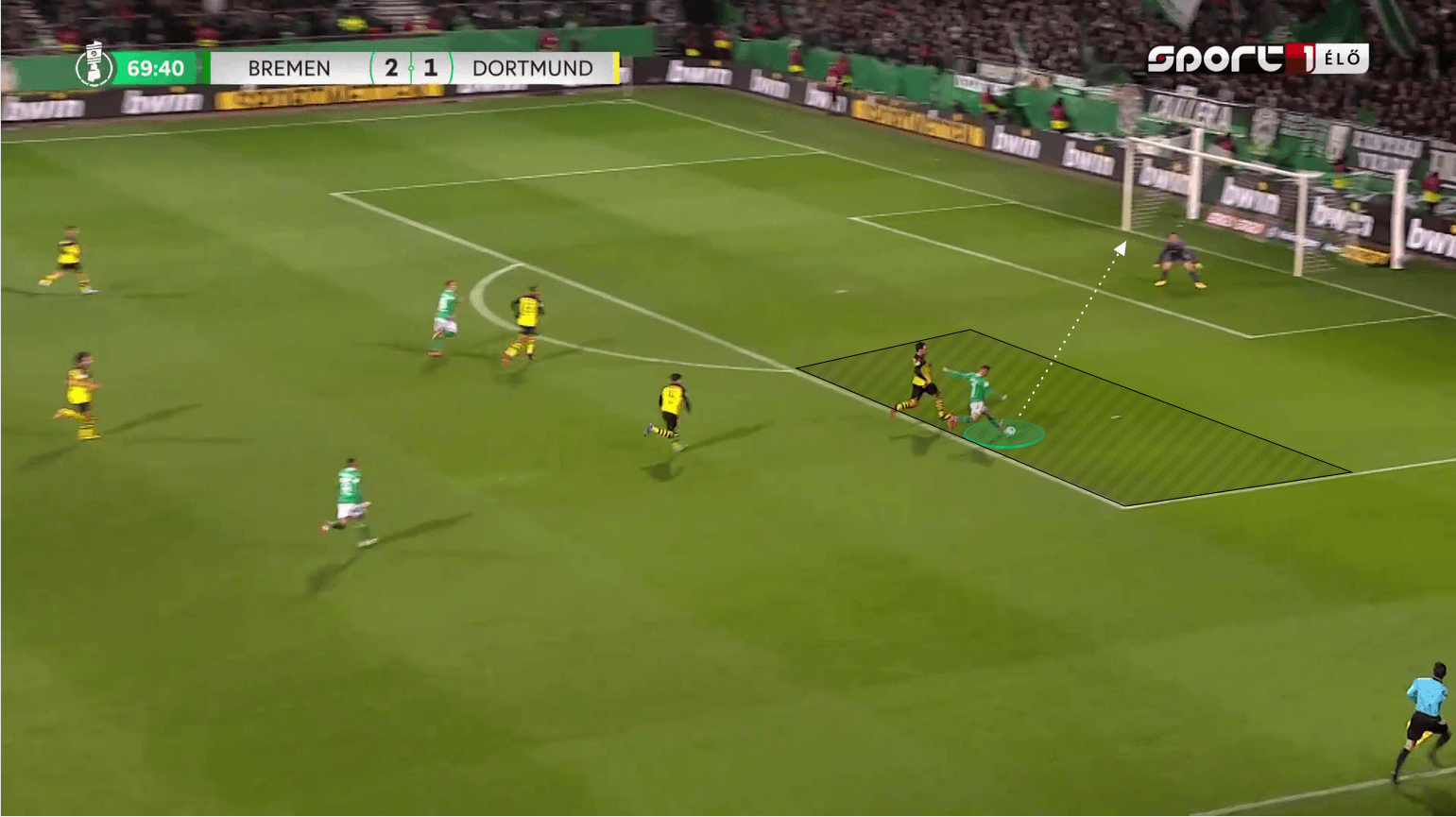 Due to his pace, he is able to get away from Mats Hummels, and is in a lot of space to be able to shoot and score.

Another example of this sort of run bringing him a goal, this time against VfL Wolfsburg – 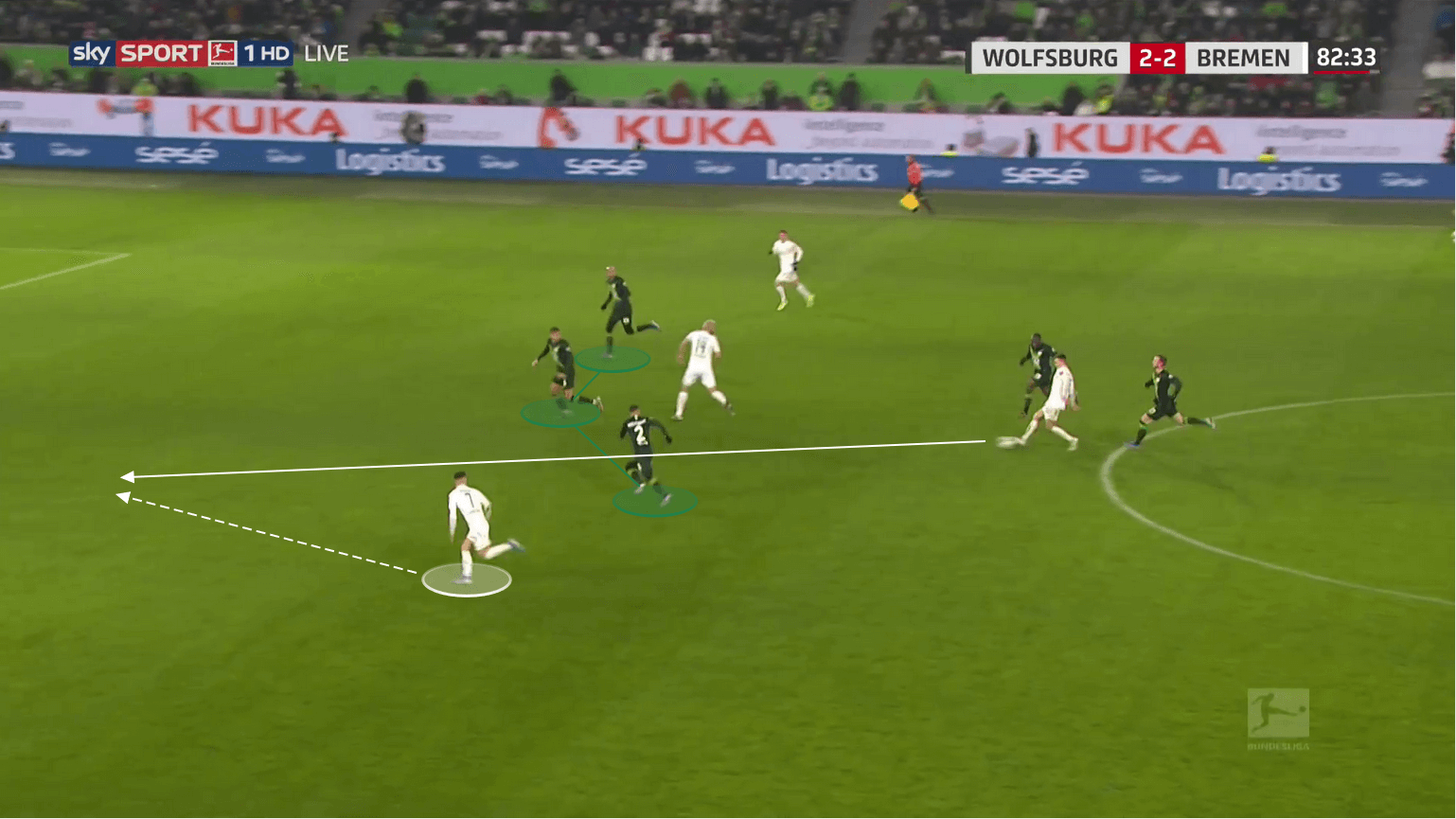 He is in a slightly wider position here, but it is the same situation, where he is running into space behind the defensive line. 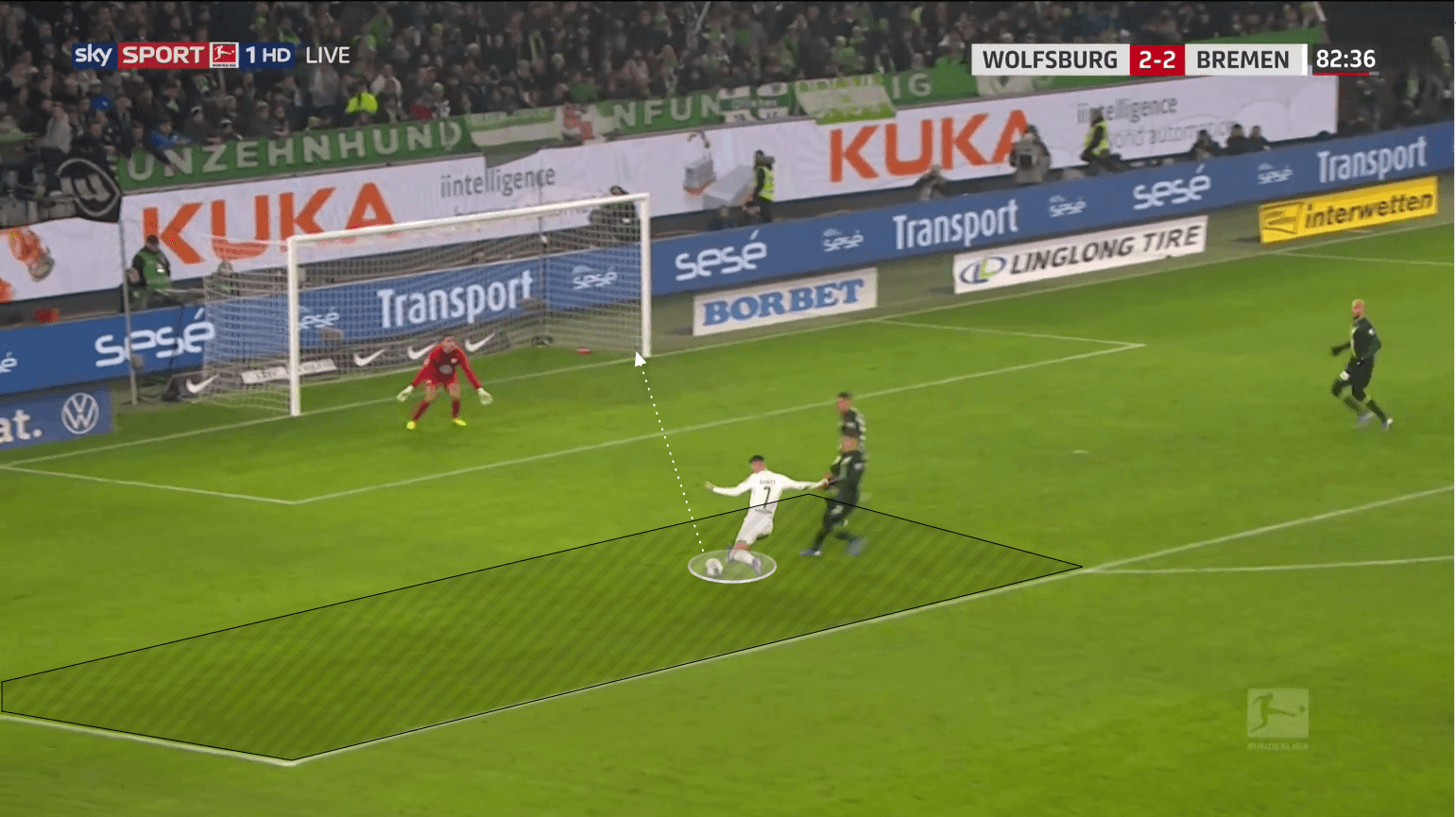 Rashica is pretty good with his weaker foot as well, scoring with a powerful shot into the bottom corner here.

This adds a little bit of unpredictability to his game, as he is capable of shooting with either foot, and this can leave opposition defenders guessing, opening up that split-second of space that he needs to get a shot away. It is also an advantage when dribbling and running with the ball, with the Kosovan international able to come infield as well as go outside and stretch the play on the touchline on either flank.

In terms of goalscoring, Rashica only managed three goals last season – however, he did score 11 goals in the 2019/20 season, and had 12 strikes in the 2018/19 campaign, showing that he does have the ability to deliver double-digit goal returns when on form.

As mentioned earlier, Rashica is a very different player to Buendia, so we cannot expect him to deliver the sort of creativity that the Argentinian did so successfully during his time at Carrow Road. Rashica will bring something different with his direct running, pace and dribbling, but he does have the ability and intelligence to both see and pull off the sort of creative passes that Buendia did, albeit a little less frequently. 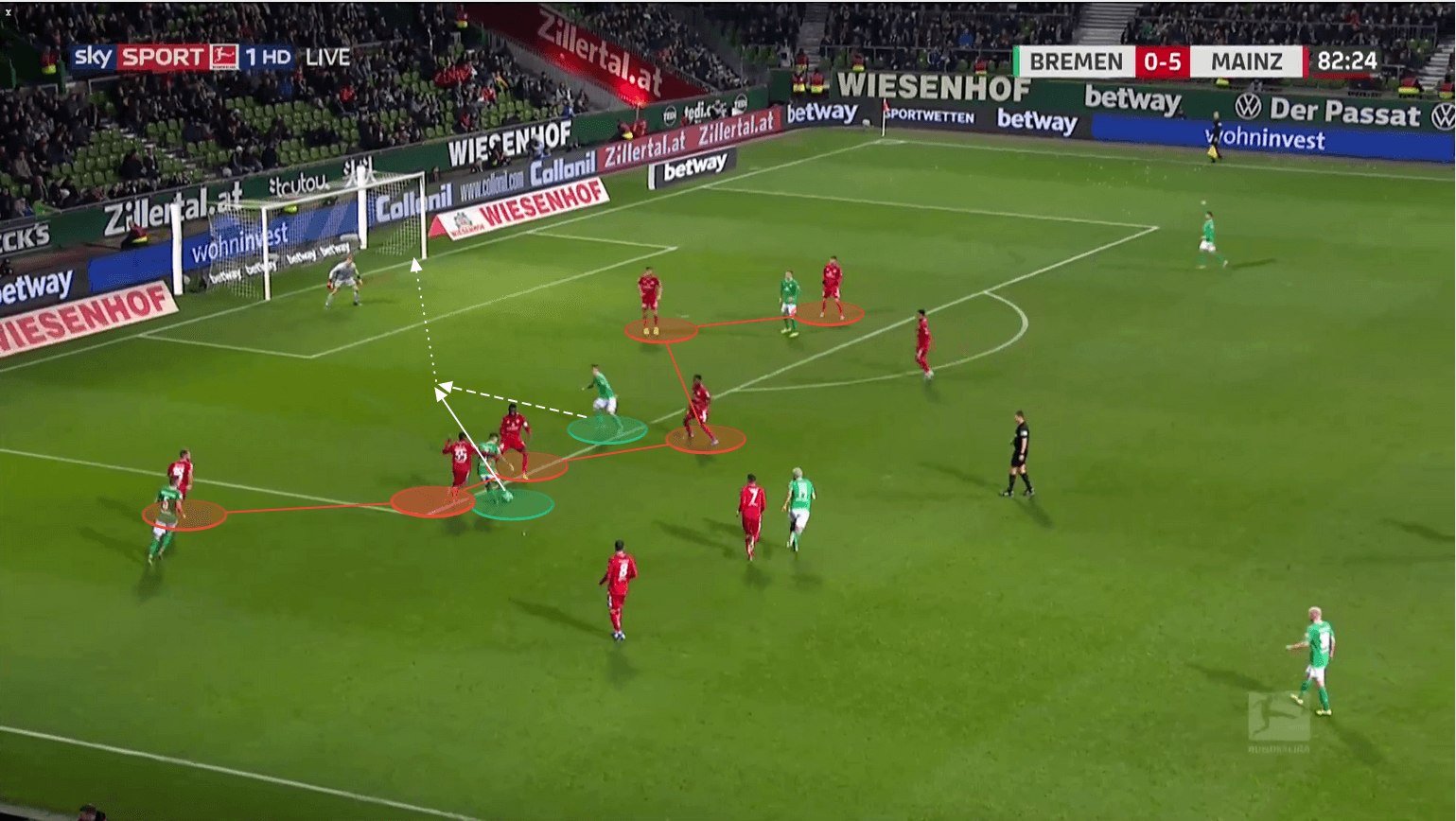 Here, Rashica is able to deliver a perfectly-weighted pass into the box for his teammate, despite the close attentions of two defenders, leading to an assist.

The 25-year-old averaged just 0.35 key passes per 90 and 1.39 passes to the final third per 90 last season. However, this is largely influenced by the fact that he was playing as the central striker on most occasions, and was therefore usually on the receiving end of those passes, rather than the player making those passes. It is also why we have not really looked at too many of his statistics from last season in this piece, as they will not be an accurate reflection of the role he is expected to carry out for Norwich City. In general, fans can expect Rashica to be a direct option on the flanks, who will try to get into the goalscoring positions whenever possible, but will also look to set his teammates up if the opportunity arises.

Milot Rashica is a shrewd addition to the Norwich City squad, especially given the price they have paid for him. The Kosovan will add a different dimension to the Norwich City attack, which will be extremely useful in the Premier League, where they will not dominate possession in the same way as they did in the Championship. Rashica’s arrival, along with the presence of Teemu Pukki in the Norwich City frontline, will give them a lot of bite on the break, and we can expect to see the 25-year-old being an exciting attacking player for the Canaries this season and beyond.