Milot Rashica is a left-winger who just turned 23 a few weeks ago and plays for Werder Bremen. The young Kosovan made last season 26 appearances in the Bundesliga, scored nine goals and assisted five times. Due to his great performances during the last season, he’s now the player with the third-highest market value in the squad of Bremen. Only Maximilian Eggestein and Davy Klaassen have a higher market value compared to Rashica’s which is £18 million.

This tactical analysis in the form of a scout report will examine Rashica’s abilities and show why he is so important for Florian Kohfeldt’s team.

He was born in 1996 in Vushtrria, a city in Kosovo and played in the youth teams of his hometown club KF Vushtrria. He debuted for their senior team aged 16 and joined Vitesse in 2015. He spent three years at the Dutch club and made all in all 100 appearances for them.

Because of his good performances at Vitesse, Bremen took notice of the left-winger and signed him in January 2018 and Rashica reportedly signed a 4.5-year contract until 2022.

Rashica made several appearances for the youth national teams of Albania and also played two times for their senior team in friendlies. In August 2016, it was announced that Rashica had switched to Kosovo and in the same month, he received a call-up from Kosovo for a 2018 FIFA World Cup qualification match against Finland. Rashica made his debut for the Kosovan national team after being named in the starting line-up in this match.

Rashica is a variable player what is a huge advantage for Bremen’s tactics since he can play on either wing or up front as a striker. Furthermore, he never just stays in his position when his team is in possession and instead, he’s always looking for free spaces and tries to create passing lanes.

Considering this, when he plays as a left-winger, he doesn’t just position in the left wide area, but also joins his teammates in the centre to overload it or switches position with the right-winger. These movements make it hard for the opponents to defend against the Kosovan. We can see in his heatmap that he’s mainly on the left wing but also drifts inside or positions on the right wing occasionally.

However, his usual position on the left wing gifts him the space to receive passes and start dribbles. Due to his wide positioning, he has some distance between himself and his opponent when he receives a pass and then can pick up speed when he goes for example in the one-on-one against the opponent’s right-back. As we will see later in this analysis, is one of his typical moves a dribble from the left wing into the middle to get himself into a good position for a shot.

Rashica likes to get involved in Bremen’s build-up and due to that he always looks for free spaces in the centre or half-spaces. As in the shot below, he often finds himself in the middle of several opponents. In these situations, he knows that it would make no sense to turn around or start a dribble and so he just lays the ball off to stay in possession. 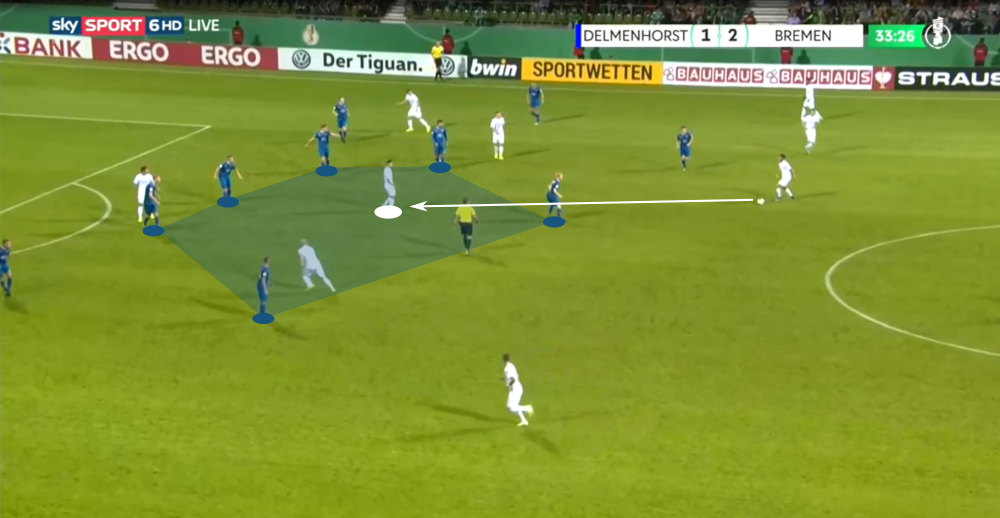 One of Rashica’s greatest strengths is his undeniable acceleration and his incredible pace. He either uses these abilities to get behind the last line of the opposition’s defence and receive a through pass or get past his opponent with a dribble. Especially when he starts such runs through the centre, the opposing centre-backs struggle to defend against him since usually, centre-backs are slower than full-backs. In the image below, he starts a run on the shoulder of the defender and uses his acceleration to beat the defender to the ball and scores.

As already mentioned, Rashica often starts a dribble in the left wide area and cuts inside to get into a good shooting position. This is similar to Arjen Robben’s famous movement, however, the Kosovan dribbles inside from the other wing. Since the young winger can shoot way better with his strong right foot compared to his left one, this movement is logical.

Secondly, the Kosovan uses for his dribbles mainly his strong right foot and especially the outside of the boot. Considering this, when he cuts inside from the left wing, and the defender tries to position between Rashica and the goal, the ball is on the other side of the Kosovan’s body than the defender. Due to that, when the opponent tries to tackle, Rashica can put his left foot into the way or use his body to avoid that the defender wins back the ball.

When the 23-years-old winger starts a dribble form a central position he usually tries to get past the defenders and move to the right to get into a position from which he can shoot with his right foot. In the semi-final of last year’s DFB Cup against Bayern, he started such a dribble from a central position and got past Mats Hummels by using his speed. After the dribble, he scored with a perfect low shot into the far corner.

As already explained, Rashica likes to get involved in the build-up of Bremen and since then he played last season on average 24.69 passes per 90 minutes and just 1.19 of them was long. To avoid senseless turnovers, the Kosovan often chooses the simple back pass to then get into another space and create a new passing lane.

Beside Rashica’s pace and his ability to dribble past defenders, his third great strength is his goal threat. He scored last season in the Bundesliga and the DFB Cup all in all 12 goals in 30 appearances. Since he didn’t always play the whole game and either was a substitute who came from the bench or was subbed off, he scored on average 0.52 goals per 90 minutes.

That value is incredible for a winger and is even better when you consider that his xG is on average 0.3. But why is there a difference of 0.22 between his xG and the actually scored goals?

Firstly, he’s got such a good technique when it comes to the shooting and due to that, he’s able to score from difficult positions like in the example below. 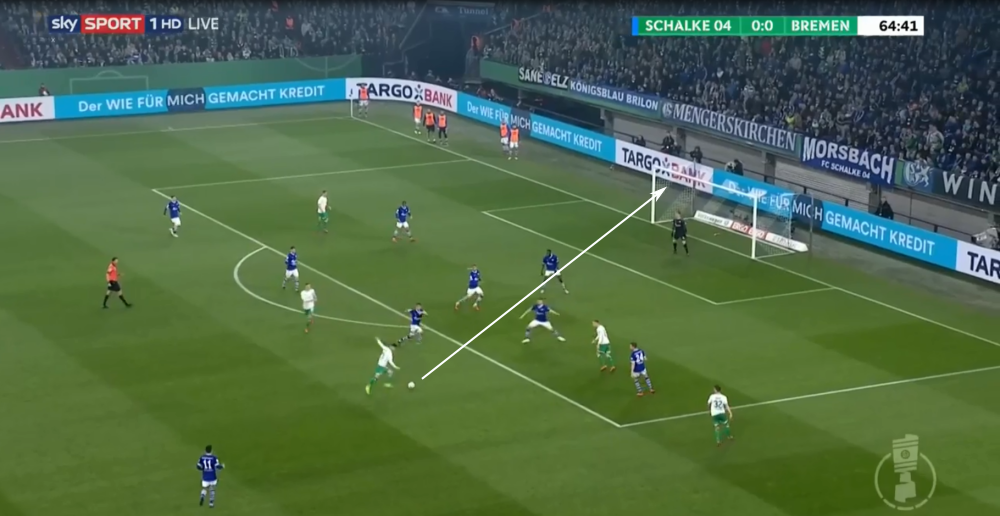 In another example which is shown in the shots below, he uses his speed to get into a good position on the wing and then makes his typical movement into the centre. However, the position and angle aren’t perfect for a shot, but the Kosovan is able to score.

Besides these beautiful goals, the young Kosovan also always stays cool in front of the goal. Almost the half of his goals which he scored during last season were after a one-on-one situation against the goalkeeper. In light of this, his ability to score from long distance and difficult situation combined with his coolness in front of the goal are the reasons which explain why his xG is lower than his scored goals.

However, even though Rashica is always looking to score a goal, he still has got the vision to see a teammate who is in a better position than himself. In these situations, he knows that it’s more important that his team can convert the opportunity into a goal then that he scores. The Kosovan is unselfish enough to know that and assists his teammates like in the shot below.

Besides his effort he puts in when it comes to the attacking and scoring of goals, he doesn’t forget about his defensive responsibilities. Rashica supports his defender more than an average winger. He makes on average 5.71 defensive duels per game and wins 52.5% of them.

However, his real defensive effort can’t be measured since he often supports his full-back as seen in the image below and then either Rashica or his teammate win back the ball and the successful duel is just attributed to one of them.

Furthermore, the Kosovan hates to lose the ball and always immediately starts the counter-pressing to win back the ball when he loses it. In these situations, the young winger shows that he wants to have the ball at his feet and that he’s ready to fight for it. In the situation below, he loses the ball and his opponent immediately passes it to another player of Schalke. However, Rashica uses his acceleration and will to win back the ball.

Rashica was among the most important players for his coach Kohfeldt during last season and is likely to be this campaign once more a key player. This scout report showed that his greatest strengths are his pace, his ability to get past a defender with a dribble, his goal threat and his defensive effort. In light of this, if he can improve the technique with his right foot, he will be an even more complete player.

It will be interesting to watch how Rashica will perform this season and where Bremen will finish this season. Although, it’s safe to say that the Kosovan could become one of the best wingers of the Bundesliga in near future since he’s still young and will continue to develop his skills if he keeps on going like this.