The Premier League is back. After the long summer break, the new 2019/2020 season started last weekend. With the VAR as the protagonist of this new season, Manchester City and Liverpool are again the favourites to win the title. But not everything is about getting to the top, as there will be 20 teams fighting for something, either the title, European cup places or relegation.

The first round brought a game that was anticipated as very interesting, considering their performance last season and the expectations around them for this one. Leicester is starting their first full season under Brendan Rodgers’ lead after starting as the team’s coach in February of 2019. Expectations are set high for a very experienced manager.

Meanwhile, Wolves have been quite a surprise under Nuno Santo’s lead. Since taking charge in 2017, he sent the team back to the Premier League after a six-year absence and in their first season back they achieved a surprising seventh place. The team showed an attractive tactical game, being one of the few teams that constantly use a line of three at the back.

Both teams are expected to be at the top half of the table and fighting for a spot at a European Cup. This tactical analysis will go over their first game in this season, that although ended up with a 0-0 score, left some interesting analysis and innovative tactics. 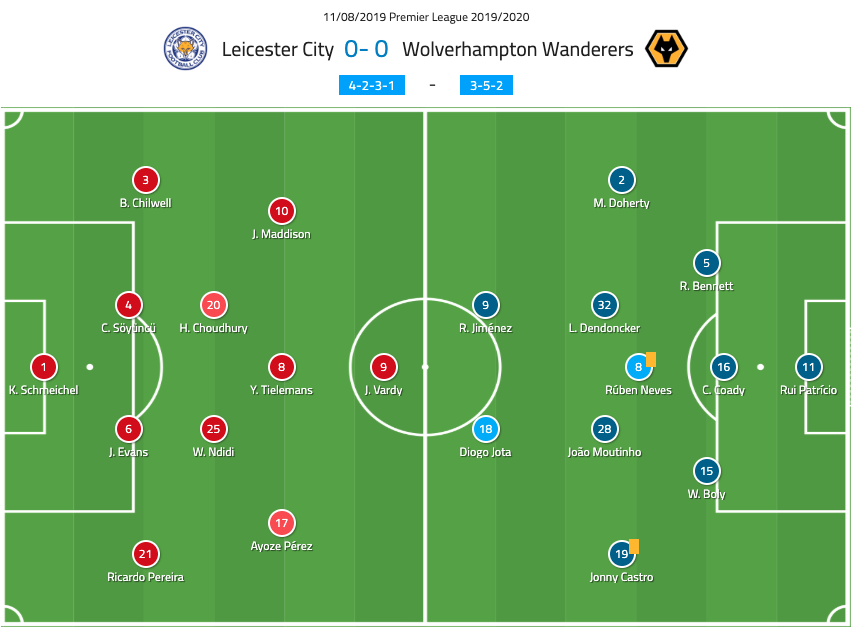 Leicester started with a 4-2-3-1 but with attacks that during the first half were concentrated in the middle. Although the team tried to use the wings close to their penalty area, as they moved past the middle of the pitch their wingers were usually cutting inside.

Wolves started with their usual 3-5-2, that sometimes turned into a 5-3-2 when defending. They attacked using both wings during the first half, but they moved to the right flank when attacking during the second half. 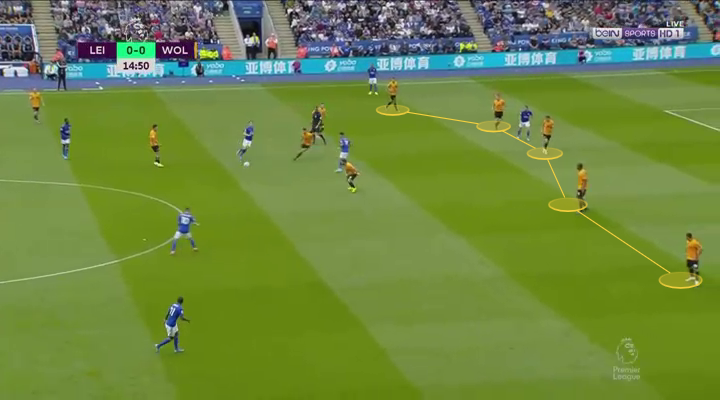 The first few minutes showed a better performance from Nuno Santo’s players. They focused their attacks at the beginning through the left wing, using the speed of Jonny Castro. Although possession started equally split between both teams, Wolves were more dangerous using their speed and acceleration after the middle of the pitch.

On the other hand, Leicester started trying to adapt to this wide game presented by Wolves, that usually brought several players through the middle, having always unmarked players either on the side or in the middle.

After the first ten minutes, Leicester felt more comfortable in the pitch. They regained possession and also started throwing dangerous direct attacks. Their offensive transitions were very fast, especially through the middle.

Interestingly, Leicester showed a new way to take advantage of the new goal kick rule, although it was less effective in being a game-changer. They put both centres back inside the penalty area forcing Wolves forwards to move closer to the penalty area line. Then Schmeichel would throw a long pass to the full-backs that were usually unmarked. 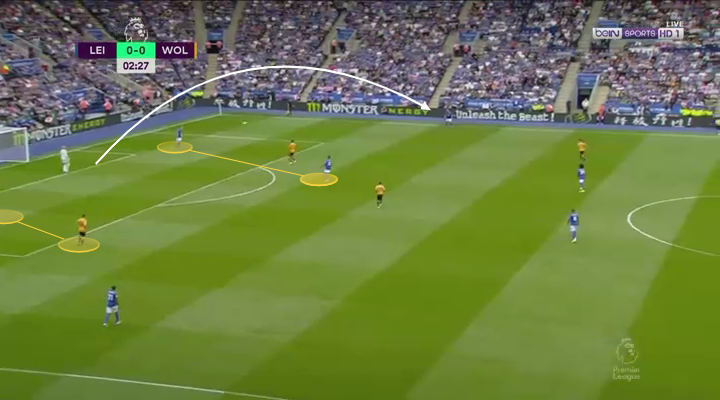 As the Wolves defence retracted, they formed a line of five players that left that line too far from their offensive players, reducing their offensive strength. This defensive positioning made it harder for Leicester to penetrate through the middle, as Wolves had their three defenders and the three midfielders covering the middle lane of attack, as shown below. 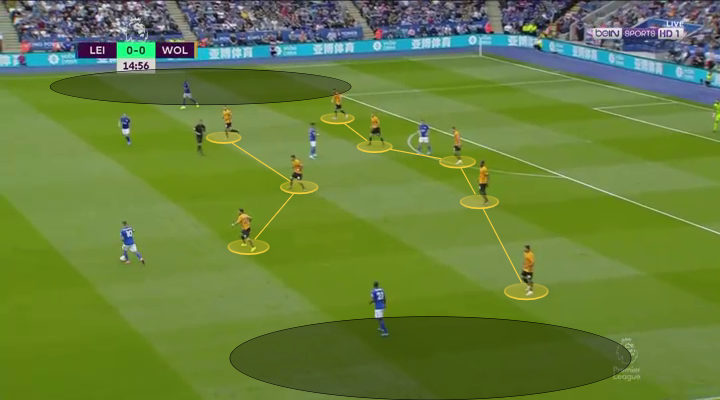 This resulted in Leicester making most of their attempts through long shots, as they couldn’t progress inside the penalty area of the visiting team. Moreover, the few times they tried to attack through the wings, especially the right one, using Ricardo’s speed as a good offensive weapon, they caused danger or had fouls in their favour.

As Leicester found that the middle attacking channel was very crowded, they had Choudhury moving back when building-up. He positioned as a third central defender, or even wider as a full back, trying to pull some midfielders out of their position. Chilwell would move higher as a winger but they were not able to break the defensive organization of the Wolves during the first half. The image below shows that situation. 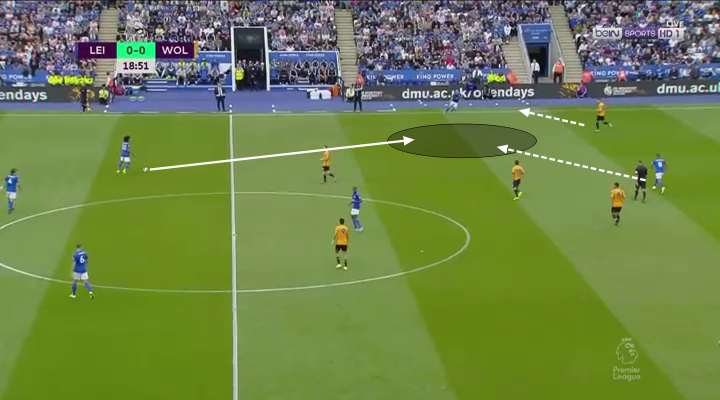 Back from the dressing room, the game restarts with Wolves taking advantage of counter-attacking. During the first ten minutes, they had three clear goal chances coming from counter-attacks and one disallowed goal by the VAR. As they gave possession to Leicester, when recovering the ball, they had both Raul Jimenez and Jota making runs forward looking for through passes coming from the midfield, such as the situation seen below. 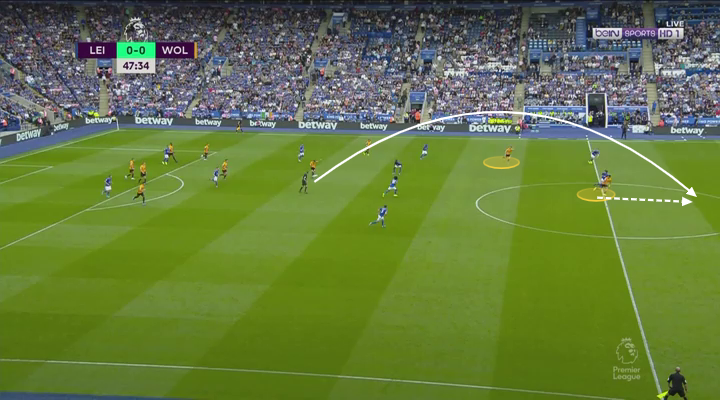 Initially during the second half, although Leicester kept possession, they again struggled to create danger. They took the ball to the last third of the pitch and started passing the ball around without being able to penetrate Wolves defence. They didn’t produce any coordinated movement to lose their markers, no change of rhythm or any creative passing to be able to break the defensive cohesiveness of Wolves. Not until Rodgers decided the first substitution, replacing Choudhury by Barnes. The latter positioned himself wider and Leicester started to use the wings more efficiently. He pulled Wolves players wider and gave more space to Maddison to be able to move forward with possession, instead of receiving facing backwards.

Ayoze, who had a very weak first half, cutting several of Leicester attacks by easily losing possession, or being unconnected with the dynamic of the attack and making wrong decisions, started to connect better with Ricardo Pereira and Tielemans. The image below shows how the volume of attack increased in the wings. 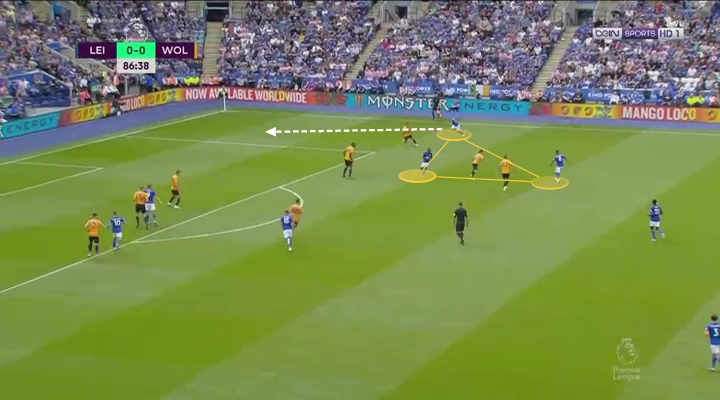 The Portuguese right-back was one of the top performers of the home team. He was one of the most dangerous attacking players and provided width to the attack as he was positioned wider. He was also very active to quickly press the rivals to cut the dangerous counter-attacks they had at the beginning of the second half.

Leicester was able to finally penetrate the defensive line of Wolves through the wings, but they were not able to move that danger to the middle, closer to the Wolves goal. This resulted in most of the attacks by Leicester ending in corner kicks, but they didn’t have the aerial strength to create danger. The home team had 12 corner kicks compared to only three by Wolves. 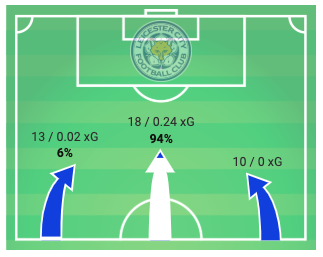 Wolves were not able to produce those dangerous counter-attacks and gave possession away to their rival. When attempting to quickly pass the ball forward, they were either unprecise or constantly anticipated by Leicester defence. They were pleased with the result and they conservatively managed to grab a point.

Although the game had no goals, it was an interesting tactical battle. While it took time for Leicester to find their offensive shape, during the second half and after a smart substitution by Rodgers they were able to attack deeper into Wolves area.

Wolves on their side showed a very interesting counter-attack game, with fast transitions that allowed them to have very clear chances. Their xG at 0.87, according to Wyscout, was higher than Leicester’s at 0.59, even though they had seven shots compared to 14 of Leicester.

From Leicester, they still have to work on transforming those dangerous attacks using the wings into clear chances for their strikers in the middle. On Wolves side, it’s understandable that it was the first game of the season and playing away against a dangerous team but they found a very effective attacking scheme by counter-attacking, would have been nice to see more consistency and ambition to keep exploiting that.