The three-month football-drought has ended, as the Premier League marked its return with a goal-thrilling match between Liverpool and Norwich. Saturday night football also returned with a series of interesting ties, which included Southampton’s journey to Burnley’s Turf Moor. Three of their last meetings in the league ended with a draw, and some fans were expecting something different this time.

After they couldn’t advance further in the Europa League and had to battle for relegation, Burnley surely want to end with a better record. A race to a place for the European competition might be a bit too positive, but if every player performs at their best then a top-half finish is possible. As they welcomed Southampton to their home ground, Sean Dyche’s expectation was to secure three points.

Ralph Hasenhüttl has had a very difficult challenge at Southampton, saving the club from relegation and reclaiming their spot inside the top-half. He has done the first part after finishing at 16th last season and with a very positive pre-season and summer window, they are confident of achieving the target. Although the first half hadn’t separated the two sides, the second period saw a different story. Ashley Barnes’ brace and a dramatic solo effort from Jóhann Berg Guðmundsson secured three points for Burnley.

This tactical analysis will provide an analysis of Burnley’s dominant 3-0 win over Southampton. Meanwhile, using statistics, we will point out how Southampton’s tactics fell short in the second half to Burnley’s tactics.

Burnley lined their side up in a familiar 4-4-2 formation with Nick Pope returning in goal after missing out the entire last season. In front of him was the back four of full-backs Matt Lowton, Erik Pieters and centre-backs James Tarkowski and Ben Mee. Ashley Westwood formed his link with Jack Cork as central midfielders. Providing the width was Jóhann Berg Guðmundsson and Dwight McNeil while Chris Wood and Ashley Barnes led the line.

Hasenhüttl also chose a familiar formation as he filled the players in his 5-2-2-1 formation. A backline that consisted of Jannik Vestergaard, Jan Bednarek, and Jack Stephens positioned in front of Angus Gunn. Meanwhile, responsible for the wide spaces were wing-backs Yan Valery and Ryan Bertrand alongside wingers Danny Ings and Nathan Redmond. Centrally, Oriol Romeu and James Ward-Prowse screened the defence and provided supports for Danny Ings up front.

Both teams entered the first period with a conservative state as they wanted to know more about the opposition’s tactics and found a way to counter it. Burnley, as usual, defended with a narrow, disciplined 4-4-2 structure. They formed a low-block that consisted of two defensive lines inside their half.

The first line was the midfielders with Barnes providing support for them. Their task was to keep the opposition’s players from making passes or through balls into the final third. If one managed to approach the ball-carrier, he had the license to be aggressive in recovering possession.

At the same time, they had to limit the space in between the channel and hold the shape when Southampton switched their attacking direction. Barnes would follow the ball-carrier and capitalise on heavy touches to win the ball back for a counter-attack. He also became the focal point when they shapeshifted laterally across the pitch. Upfront, Wood acted as a central target who restrained from joining the shape. He was very important in Burnley’s counter-attacks as his off-the-ball movement created spaces for Barnes or their wingers to dribble in.

The defenders’ line remained compact on the edge of the 16-yard box. They were the last line to stop the opposition player’s dribble and blocked any long shots that came towards Pope’s goal. Similar to how they played in their last two seasons, the players were required to be stubborn and aggressive against the pressure. But they had to minimise the number of fouls being made near the box as Southampton were dangerous from direct free-kicks. It did come true once in the second-half when the opposition had a free-kick just outside the box, which Bertrand squandered.

Southampton, on the other hand, were active in trying to find a way towards Burnley’s final third. They had the tendency of building their attacks from the back using three centre-backs. Hasenhüttl usually required his defenders to be comfortable on the ball and able to make penetrative passes. During the game, they usually located on the edge of the middle third with Stephens staying centrally and the other two remained wide.

Romeu would come deeper to receive the ball while Ward-Prowse located high and in between Burnley’s central midfielders. The two wing-backs had the option of making overlapping runs into the box, which they did occasionally, or positioned inside the third to pick up a short pass.

As mentioned, Southampton’s attackers usually worked between Burnley’s two defensive lines. Redmond and Ings stretched out wide and attempted to do the same with either one of the lines. This would create spaces centrally for Ward-Prowse’s through balls or direct passes towards Adams’ run. The former Birmingham striker positioned himself near the opposition’s centre-backs and was willing to pick up the ball to sprint towards the box.

The wing-backs had two options to pick in Southampton’s attacking transition. One was making overlaps into Burnley’s half and Valery executed this perfectly. With three attackers constantly moving in the channel, this attracted Burnley defenders’ attention. Also, it created the chance for Valery to run into the space behind their defensive line. Vestergaard and Romeu noticed his runs multiple times and made long passes to him.

Defensively, they pressed aggressively high up the pitch with the aim of recovering possession immediately. They adapted a man-oriented press in which the attackers were responsible for marking Burnley’s defenders. Meanwhile, two central midfielders followed Westwood and Cork and prevented them from coming short for a passing option.

Their pressing shape also shifts flexibly with the ball and left the farthest full-back free. This allowed them to create a pressing overload and win the ball back more efficiently. They didn’t also worry about being superior in numbers when Burnley’s wide midfielders dropped deep. Since both wing-backs had followed them, they could match them and continue the press.

A different story in the second half

For the first twenty minutes of the second period, the teams couldn’t be separated and were still trying to find a way to counter the opposition’s style of play. Southampton were taking on a more positive state in defence as they tried to create overloads even inside their own half.

When Burnley pushed their players up in attacks, Hasenhüttl’s side still aggressively won the ball back inside the overloading area. In the shot below, Southampton had five players involved compared to Burnley’s three. Also, notice when two players came close and attempted to receive the ball outside and they were immediately marked by Bednarek and Redmond.

This left them vulnerable when Southampton won the ball back and started a counter-attack. Adams and Redmond were two players that had the pace to dribble the ball quickly and put pressure on Burnley’s defence. Fortunately, with four players staying back in attack, they were able to lock the ball-carrier up and recovered possession.

Two central midfielders would come closer and attempted to tackle the ball. Meanwhile, Tarkowski and Mee constantly tracked back and looked for potential receivers surrounding him. They screened Pope’s goal in case Southampton’s attacker reached the box and blocked his shot immediately.

While Burnley were still looking for a way to threaten Gunn’s goal besides from long shots, Southampton continuously made mistakes inside their defensive third. Firstly, when the defender stepped out of his original position to mark one of Burnley’s player, he left a gap behind him.

Notice two consecutive actions below as Bednarek and Valery left their original position to mark McNeil and Pieters. When the Southampton right-back moved forward, his colleague was in hand to cover the space. But Bednarek didn’t have someone to do so as Stephens had to follow Wood and was slow to react to the situation. Burnley’s striker did capitalise on this but his chance wasn’t converted into a goal. 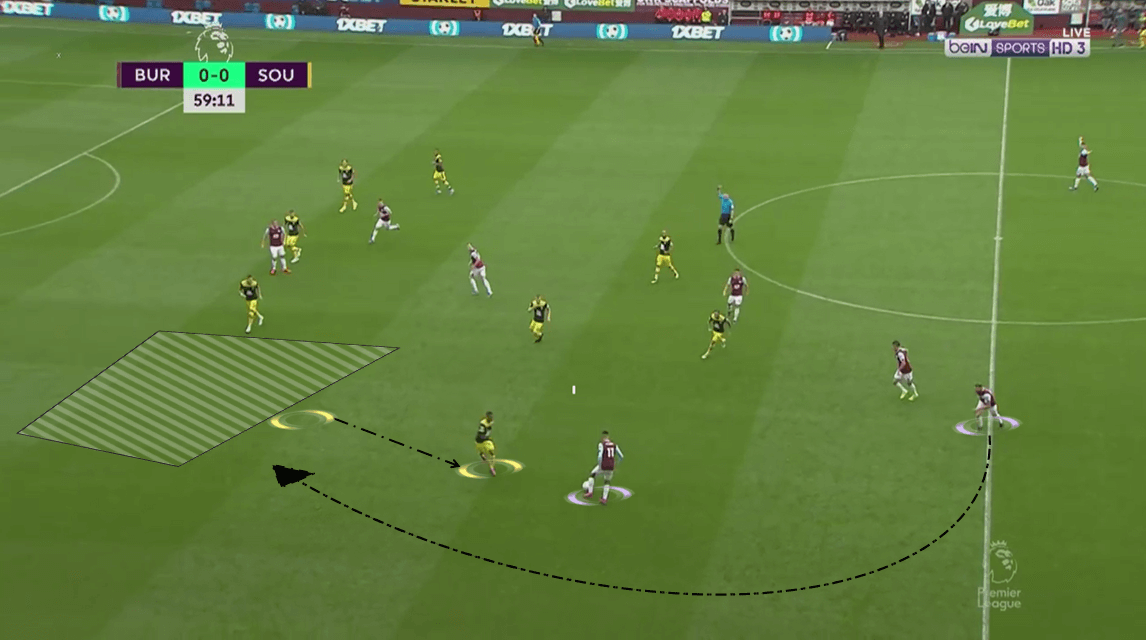 Secondly, they usually got into trouble when marking Burnley’s attackers. Their attention was ball-oriented as they occasionally focused on the ball-carrier. This allowed Wood and Barnes to make runs in behind their back and escape their sight easily. In the situation above, when Bednarek ran towards Pieters he didn’t notice that Barnes was behind him. With just a through ball, the Dutch full-back could open a great chance that could be turned into a goal.

Another situation that eventually did help Barnes’ double up his tally came from poor positioning and decision-making from Vestergaard. Again, from Pieters, he dribbled his way up and caught the attention, mostly, of Southampton’s defenders. When he made the cross towards Barnes’ run, the only player that noticed the Austrian striker was Bertrand. He couldn’t react and close him down due to the fact that he was a bit farther away.

As we mentioned about Vestergaard’s mistake, he was also involved in a poor positioning situation earlier. It looked like Pieters really made a big impact on the game as his innocent clearance wasn’t cleared properly by the Danish centre-back.

Although his physicality and height would have helped him reach the ball, he was positioned just slightly farther away from where the ball dropped and missed the interception. Barnes didn’t want to waste that great chance and he beat Gunn with a thumping shot towards his goal. In just ten minutes, Burnley capitalised two major errors from Southampton and basically sealed the game with Barnes’ brace.

Southampton have had a very successful pre-season after securing four out of five wins in their friendly matches. But playing against a team where Hasenhüttl is still looking for a way to counter their tactics seems like a big task for them. Burnley with their low-block, stubborn defending limited the threat that came from Southampton’s attacks. They even managed to score three goals in the process and got off to a very good start to the season. Dyche’s side couldn’t ask for a better start and they will want to build on this for the remaining of the season.

This is still the first match of the season and it’s no surprise that Southampton will display their problems during the process. It is necessary for the South Coast-based club to find a way to solve them and Hasenhüttl needs his players to recover their best form before they travel to Anfield.

My name is Daryl, I'm a young writer from Vietnam. I have a strong love for Southampton and Atlanta United. To me, football and EDM is the best combination.