Bologna go into this season in a unique situation. On the one hand, they hope to build on a great second half of the season under Siniša Mihajlović that saw them finish 10th. On the other, there is a huge, dark cloud hanging over the club due to Mihajlović being diagnosed with acute leukaemia over the summer. That situation obviously creates a lot of uncertainty. Still, there is a lot of excitement due to clever additions to an already good squad and interesting tactics. This tactical analysis scout report of Bologna will provide a season preview of the tactics they will look to implement.

Siniša Mihajlović has had spells at various different Serie A clubs, including Fiorentina, Milan, Sampdoria and Torino, without impressing tactically. My overriding image of a Mihajlović team is one pumped with a lot of energy but with little tactical substance when the enthusiasm fades. He has always seemed to be a motivator rather than an innovator. However, his work with Bologna last season (when he returned for a second spell at the club) and now in pre-season suggests some clear, interesting tactical ideas.

Just like in his time at Torino, Mihajlović has preferred a 4-1-4-1 defensively. In possession, Bologna move into a 3-4-2-1 and look to build from the back. Ever since Paulo Sousa’s flexible Fiorentina, who defended in a 4-4-1-1 and attacked in a 3-4-2-1, we’ve seen many Serie A coaches opt for such flexible systems. Below, I’ll look at how Mihajlović makes his Bologna system work.

As I will look at later, Bologna defend in a 4-1-4-1 formation. In possession, that shape changes into a 3-4-2-1 with the right-back moving into the position a right-sided centre-back would occupy while the right-winger stays wide. On the left, the opposite occurs as the left-back moves forward to maintain width while the left-winger moves inside. Additionally, the right-sided central midfielder moves higher to create the midfield box highlighted in the image below.

These movements allow Bologna to position players between the lines of the opposition and give them various passing options at different horizontal lines. It also allows them to have a compact shape in defensive transition as the players are positioned well to allow for intense counter-pressing, which is something Mihajlović wants.

The image below again highlights the different roles played by the full-backs, in this friendly against Augsburg it was Takehiro Tomiyasu at right-back and Mitchell Dijks at left-back. Tomiyaso remains narrow and forms a back-three with fellow new signings Danilo (central centre-back) and Stefan Denswil (left-sided centre-back). Dijks (white), however, remains wide on the left with Riccardo Orsolini (black), the right-winger, providing the width on the right with Tomiyasu narrow. 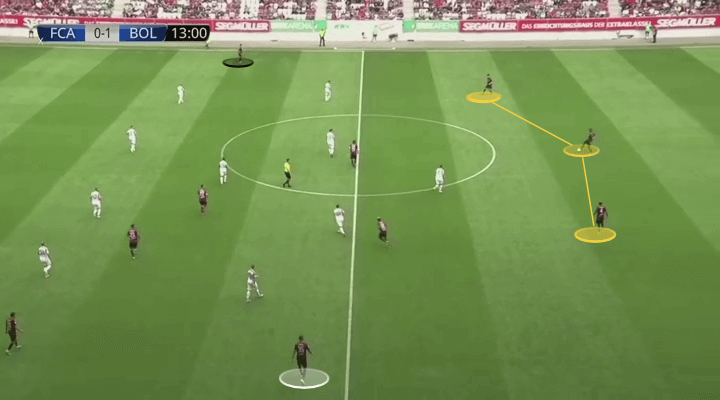 The creation of a 3-4-2-1 in attack provides Bologna with a lot of central options, maximum width as well as good coverage of the five vertical channels of the pitch. Furthermore, it allows them to defend the central areas in defensive transition and force opposition counters wide. Obviously, though, the shape is only the first step when attacking because Bologna have some very interesting methods for progressing the ball.

Firstly, their back-three does not behave in the usual manner. For most teams using a back-three, the central centre-back will be the deepest and play the first pass or act as a safe option to go back to. There is an issue though since you could theoretically use the goalkeeper to do that and by having a defender just in front of the keeper you lose one possible build-up player. Together, the goalkeeper and central centre-back often appear on a straight line and offer little in terms of beating a press.

Instead, Mihajlović has used the central centre-back in an innovative way to create an overload to the press. This involves the defender instead moving higher to pick up a defensive midfield position when Bologna are pressed. This creates the diamond shape seen and explained below.

I have picked out a sequence from the Augsburg game to highlight how they work in practice. In the first image below, we can see how Augsburg move up to press Bologna. Danilo steps into midfield as the left-sided centre-back Denswil passes the ball back to the goalkeeper Łukasz Skorupski. 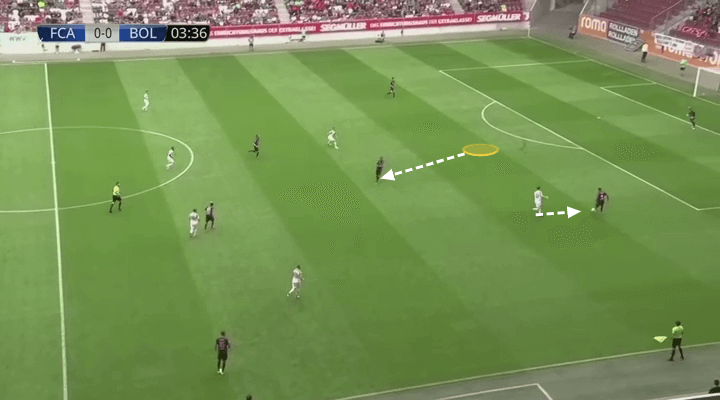 In the second image below, six seconds later than the first, Skorupski has transferred the ball to Tomiyasu. The Japanese defender plays it into Danilo who is unmarked and can turn and face forward. Notice the space available to the Brazilian behind the Augsburg striker. If he had remained in a traditional position, he would never have been able to receive this pass and thus break the press. 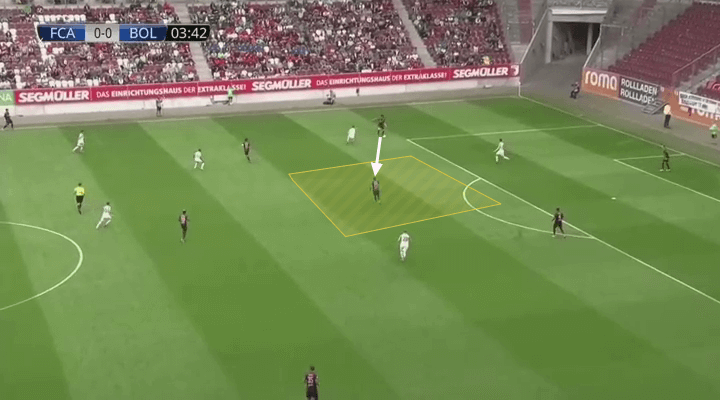 In the below image, we can see that Bologna have now properly attracted Augsburg to press them as every opposition midfielder and forward is pressing the ball. Danilo has now received possession, spots the position of Orsolini behind the Augsburg midfield and threads the ball through to the Italian winger.

As Orsolini turns, he can then spray the ball wide to Sansone who can attack the full-back in a 2 vs 1 situation due to the overlapping run of the left-back Dijks. With clever positioning, rotations and passing, Bologna have attracted pressure, played through it and now find themselves attacking 4 vs 4 from the halfway line. 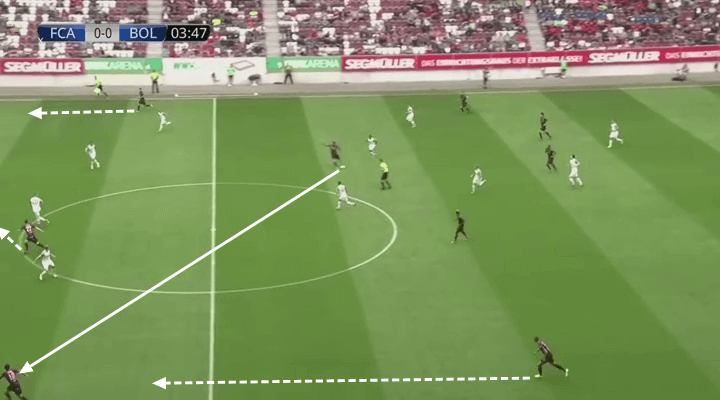 The roles and combination play of the front-three is also interesting. Nicola Sansone is tailormade for the role of inside-left forward. The Italian can play as a winger looking to cut inside or as an attacking midfielder, so this position somewhere in between suits him well. As he often looks to receive the ball to feet, as he does below, the other two forwards must threaten in behind. This is why the deployment of Roberto Soriano, who is excellent at making deep runs from midfield, as the inside-right forward is so interesting because his movement in behind is the perfect balance to Sansone’s movements to receive.

Bologna’s attacking patterns are really interesting and they have shown tendencies of other innovative ideas in pre-season. One of those include Tomiyasu, the right-sided centre-back in possession, making overlapping runs when Orsolini cuts inside in the final third. It remains to be seen if this is something Mihajlović will continue with when the Serie A returns. Overall, Bologna are extremely interesting to watch and they are sure to surprise a few people with how well they are playing this season.

The flexibility of Bologna’s attacking play is mirrored in the way they defend. Starting from a fairly straightforward 4-1-4-1 defensively, they adapt their pressing quite well to the position of the ball while retaining man-orientations in midfield in particular. The main focus seems to be to prevent central progression for the opposition since the wingers tuck inside (as explained below) to allow the ball to be played into the wide areas where Bologna can then overload and press aggressively.

Bologna usually start from a mid-block when pressing but move higher when they sense an opportunity to do so. When they do press high, the ball-near central midfielder will step up alongside the striker to create a situational 4-4-2 due to the defensive midfielder pushing into the space vacated by the central midfielder’s movement. This is explained in the image below. The pressing is then largely man-orientated although the focus is still to remain compact centrally and force the ball wide meaning they mix man-marking and more positional concepts.

In deeper areas, Bologna retain their 4-1-4-1 shape and look to keep the team compact, as seen below. Poli has an interesting role as the defensive midfielder. As you can see in the image below, Poli (black) sits in a traditional defensive midfield position. However, his focus is not on the ball but rather what happens in the box. He has the responsibility of dropping into the back-four to help the centre-backs and cover them should they need to move out towards the sides to give support for the full-backs. 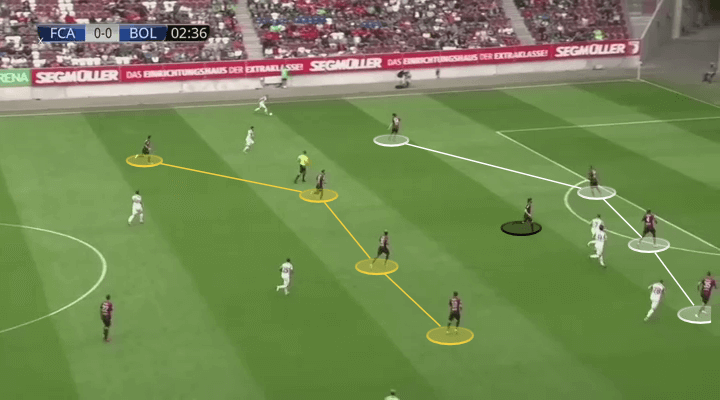 This happens in the below scene as Augsburg double up on Tomiyasu (white). As the ball is played beyond the Japanese to the underlapping player, Danilo (yellow) moves out to stop the opponent. This is where Poli’s (black) role comes in. He then drops into the first post space to cover for Danilo should the ball be played into the space in front of the goal. 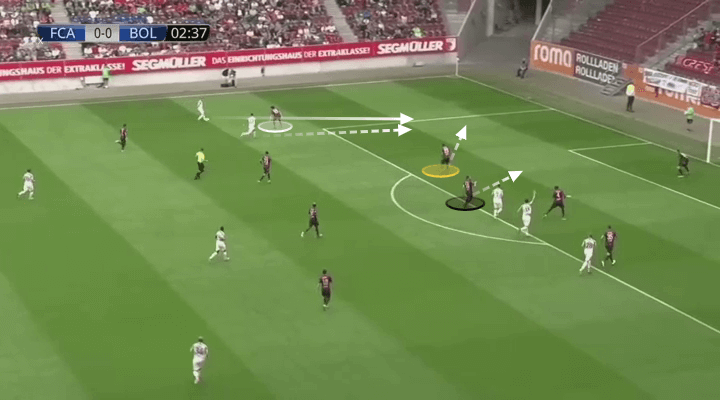 Bologna’s defence will be tested this season, and with three new signings likely to start, they will need to continue to work on the movements of the back-four and its understanding with the midfield. The signs are that they will get it right though and combined with the progressive possession ideas Bologna look likely to enjoy a good season under Mihajlović.

This has been a summer of progression in Bologna as some deals have been made permanent and some previously important players have left. Erick Pulgar is the main loss following the Chilean’s move to Fiorentina but trusted squad players like Emil Krafth, Filip Helander and Ádám Nagy have also left.

The squad still looks exciting though given the new arrivals. Takehiro Tomiyasu, the Japanese 20-year-old, is an excellent signing and Andreas Skov Olsen is only nineteen but very talented. Stefano Denswil is a good replacement for Helander and is hopefully the commanding presence that Bologna need in defence.

Łukasz Skorupski is the first-choice goalkeeper and a very solid one at that. In front of him, Tomiyasu and Ibrahima Mbaye will battle it out for the flexible right-back role. Danilo’s stay is now permanent and he looks likely to form a partnership with Denswil. Mattia Bani, Arturo Calabresi and Nehuén Paz provide back-up. The squad is a little short at left-back with Mitchell Dijks the only natural left-back in the squad. Mihajlović has used the Czech winger Ladislav Krejčí in the hybrid left-back/left wing-back role during pre-season and he might be a good attacking option in that role.

In midfield, Andrea Poli is an important player for Bologna, as is the club captain Blerim Džemaili. They are likely to be the first-choice pairing alongside Soriano, but Michael Kingsley has had a good pre-season, the 20-year-old Swede Mattias Svanberg impressed last year and Godfred Donsah is still there, too. Add new signing Jerdy Schouten into the mix and you have a lot of options.

On the right-wing, Orsolini will compete with Skov Olsen to start and Sansone is the favourite to play on the left. He has no natural understudy, but expect Rodrigo Palacio to get minutes in that role too. Palacio is one of four options to start up front, with Mattia Destro, Diego Falcinelli and Federico Santander completing Mihajlović’s strike options.

It is a very good squad with no glaring weaknesses. Instead, it is an exciting squad packed with young talents such as Tomiyasu, Kingsley, Skov Olsen, Svanberg and Orsolini. Additionally, they also have a lot of experience with the likes of Soriano, Sansone, Destro, Palacio, Poli, Danilo and Džemaili.

As this analysis has shown, there are reasons for Bologna fans to be excited about the upcoming season. The squad assembled by Riccardo Bigon and Walter Sabatini is very good and Siniša Mihajlović has overseen a tactical change since replacing Filippo Inzaghi that bodes well. The big question mark is, naturally, Mihajlović’s battle with leukaemia and how that will affect the squad. On the pitch, Bologna look well set for a successful season but the health of their coach might prove problematic as the season progresses.