Cardiff City will start the 2020-21 season as one of the favourites for promotion, after narrowly missing out of returning to the Premier League at the first time of asking last term. Neil Harris oversaw a fantastic run in the second half of last season, as the Bluebirds picked up 40 points from Boxing Day onwards. City finished in fifth place, but they lost in the playoff semi-final to eventual promotion winners Fulham.

As he tries to evolve the squad in the transfer window, Harris has brought in striker Kieffer Moore and versatile right-sided player Jordi Osei-Tutu so far, with Osei-Tutu arriving on a season-long loan from Arsenal. The 21-year-old can play as a full-back, wing-back or winger, so adds flexibility on that side of the pitch.

This scout report will provide a tactical analysis on Osei-Tutu’s game, giving an insight into what he may be able to bring to the Welsh side.

The Reading academy product joined the Gunners in 2015. He’s yet to make his competitive debut for Arsenal, but he did spend all of last season on loan with German 2.Bundesliga side Vfl Bochum. After a difficult start to life in the Ruhr region, Osei-Tutu managed to establish himself as a key player in a side that overcame relegation fears to finish in eighth place.

He played a total of 1,417 minutes in the German second tier, spanning across 21 games. The youngster managed to chip in with a decent total of five goals, scored at a very impressive rate of 0.32 per 90 minutes. Osei-Tutu also registered two assists. 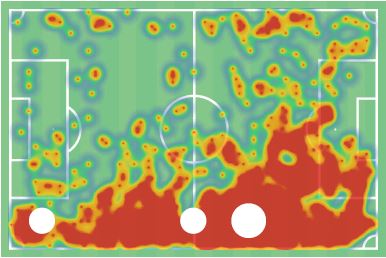 His heatmap shows his fantastic work rate and ability to get up and down the right line quickly. Osei-Tutu often pushed forward and played close to Bochum’s lone striker, as the club preferred to use a 4-2-3-1 system. Within these tactics, he played most often as the right-sided attacking midfielder. When he first joined Bochum, he played at right-back. However, Osei-Tutu was moved into a more advanced role after struggling in that position.

The analysis will firstly look at Osei-Tutu’s performance data from last season. Although he played in a much more advanced role for Bochum, it’s thought that Arsenal see him as more of a full-back. He’s been given the number two shirt at Cardiff, and he’s played as a wing-back in a 3-4-3 formation during pre-season. Therefore, it seems likely that Osei-Tutu will play as a wing-back, at least initially. Below are some of his defensive metrics from last season. All stats are per 90 minutes unless it’s possession adjusted or a percentage. 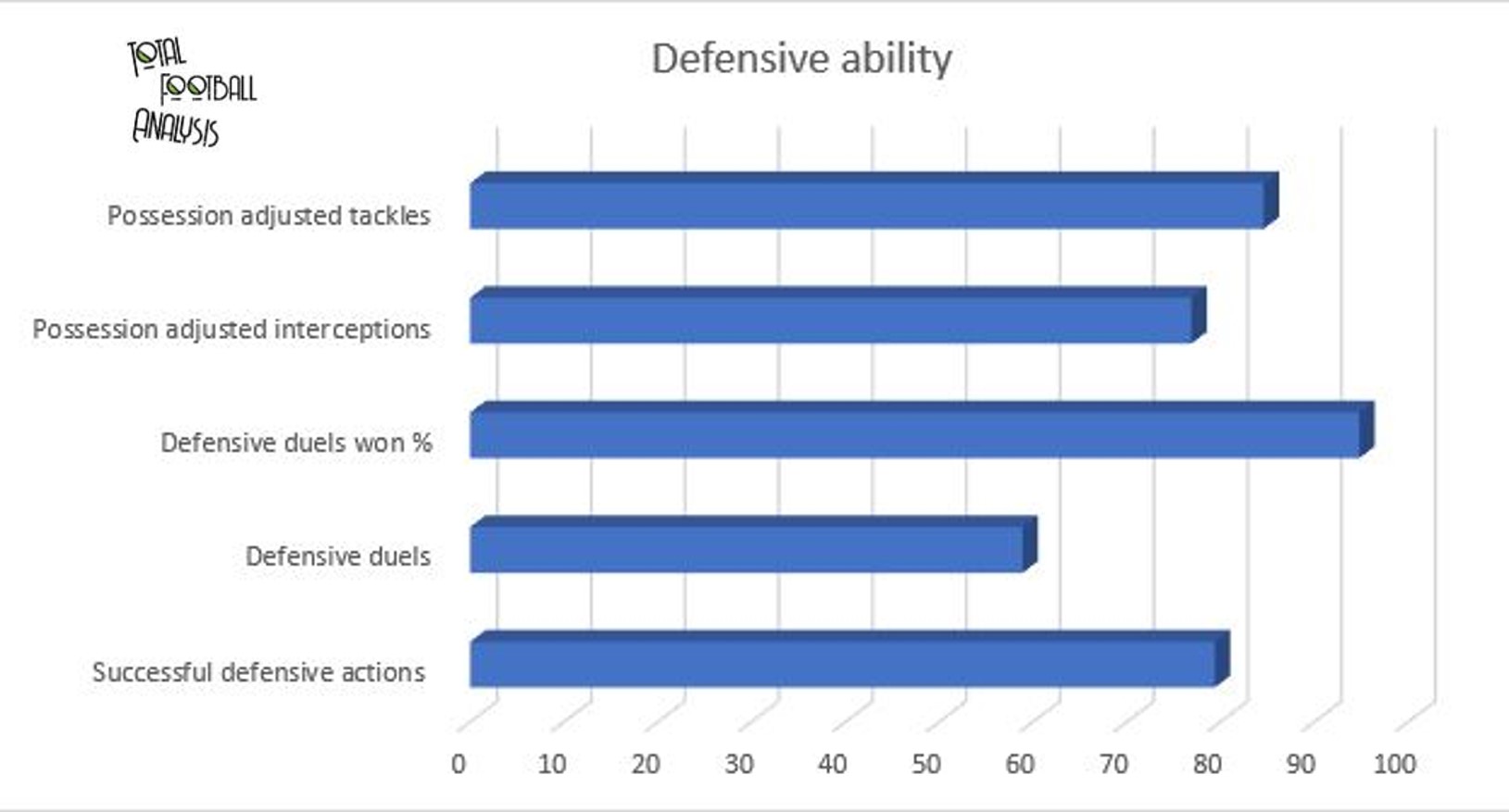 In terms of successful defensive actions per 90 minutes, Osei-Tutu averaged eight, giving him a percentage ranking of 79.4. This shows that he’s active in the defensive phase, and the fact that he’s very successful in his duels indicates that he’s better than most wingers in his defensive duties. He also averages a large amount of possession adjusted interceptions (4.77 per 30 passages of opposition possession) which suggests he’s able to read the game well by cutting off passing lanes. 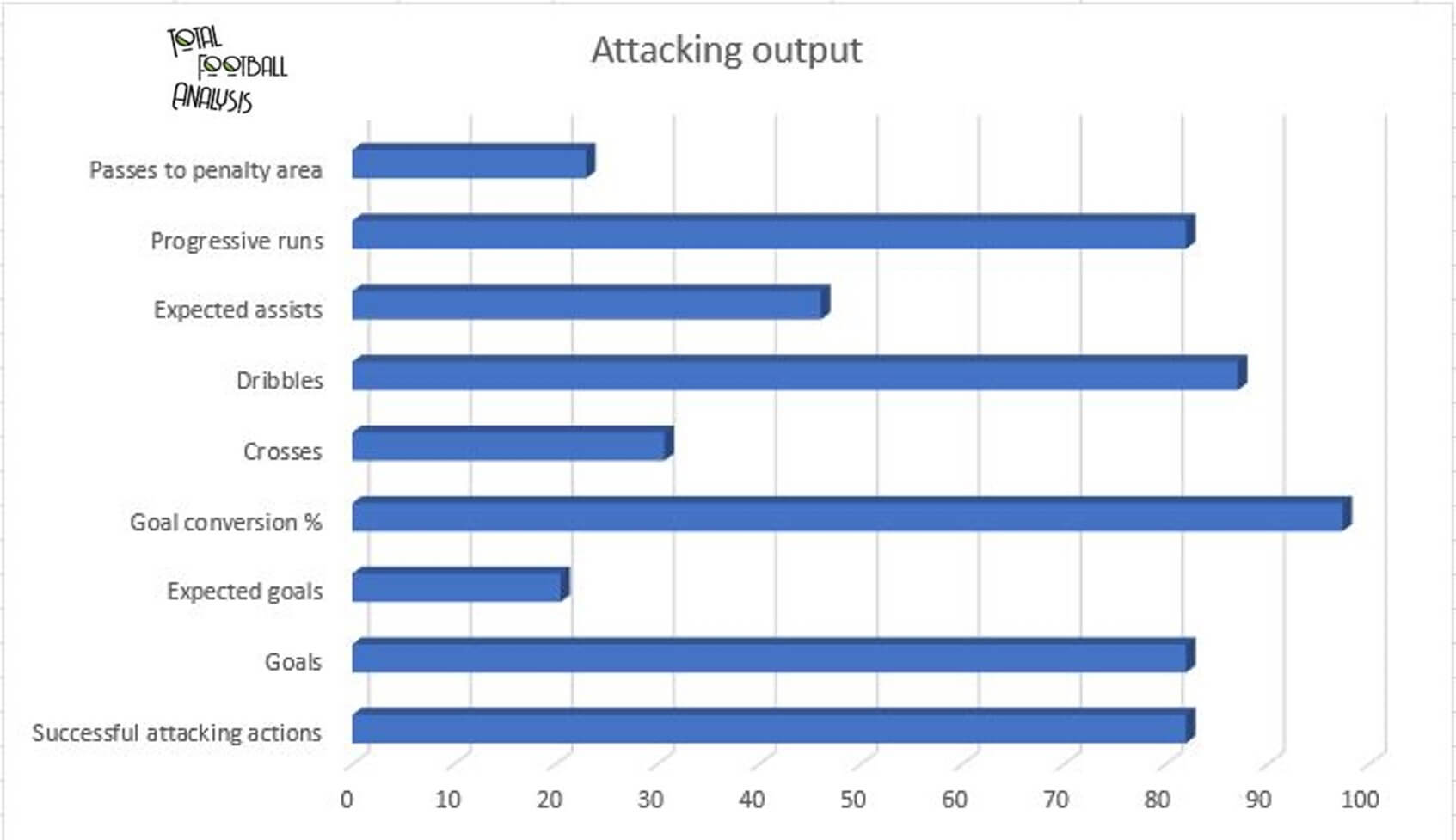 In terms of his attacking metrics, the number of goals he scored and his conversion rate immediately stand out. As we mentioned earlier, he averages 0.32 goals per 90 minutes. This gave him a percentile ranking of 82. Osei-Tutu’s conversion rate of 31.25% yielded an outstanding ranking of 97.4. Interestingly, he only averaged 0.1 xG (expected goals) per 90 minutes, so it’ll be interesting to see if he can sustain such a huge xG overperformance next season.

The statistics also show that he’s a high-volume dribbler, averaging 5.97 per 90 minutes.

After struggling as a conventional right-back in a back four, it’ll be interesting to see how he copes as a wing-back if he’s played there. When he played on the wing for Bochum, he demonstrated a willingness to get back and help out his full-back. He was always switched on in the defensive phase, and, when his team were out of possession, Osei-Tutu would generally take up a narrow position. This meant that Bochum could be compact horizontally, meaning the opposition wouldn’t have much space if they tried to play the ball through midfield. 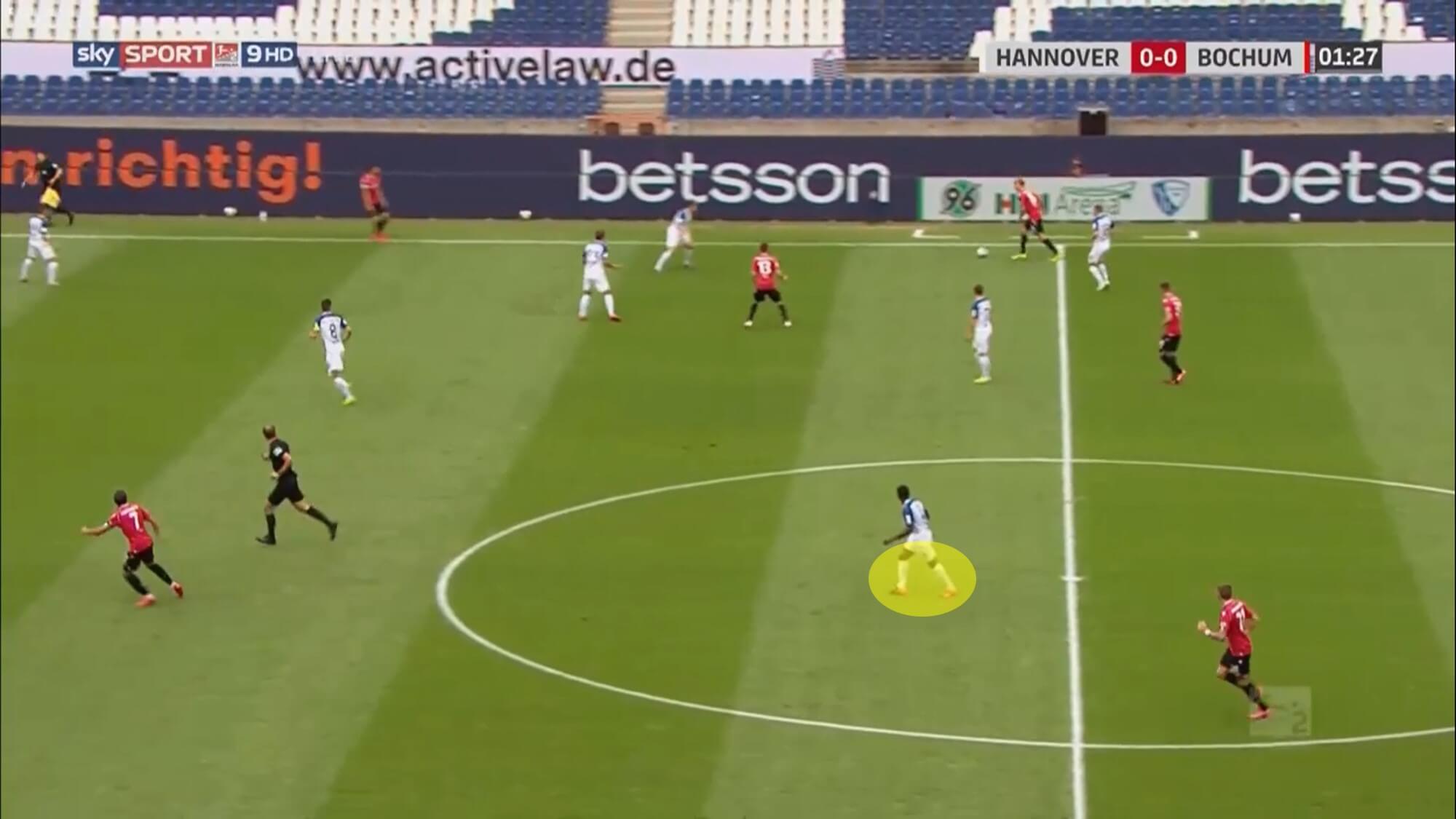 As you can see in the image above, Osei-Tutu is tucking into a slightly more central position to help his team keep that compact shape. By doing this, he’s also in a better position to intercept any loose balls that may flash across the midfield, which is exactly what he managed to do. 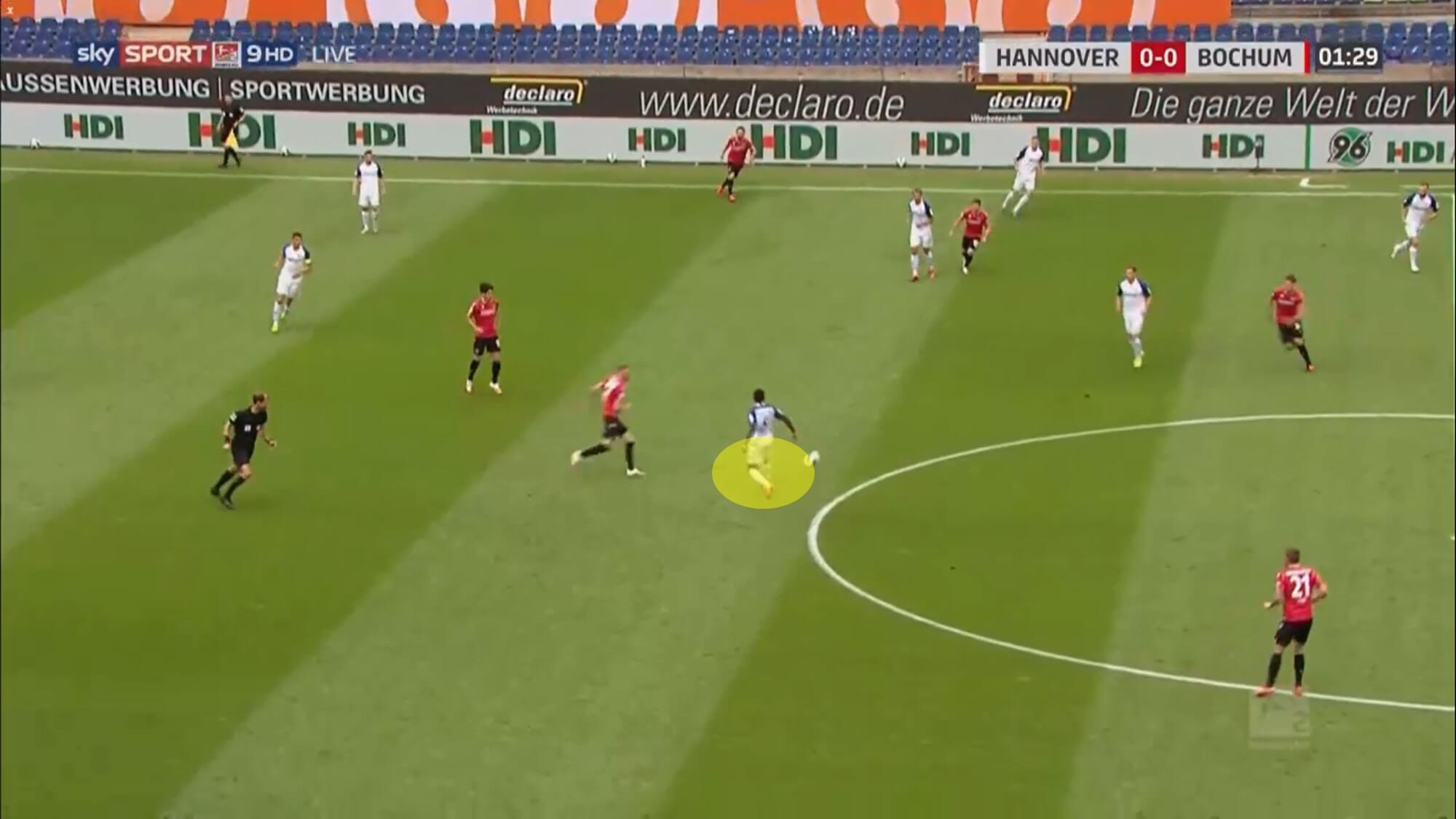 Osei-Tutu is also a very astute presser, and he has tactical intelligence to be able to carry out a gameplan within a defensive structure. When an opposing team built from the back against Bochum, he’d usually take up a position like the one below. 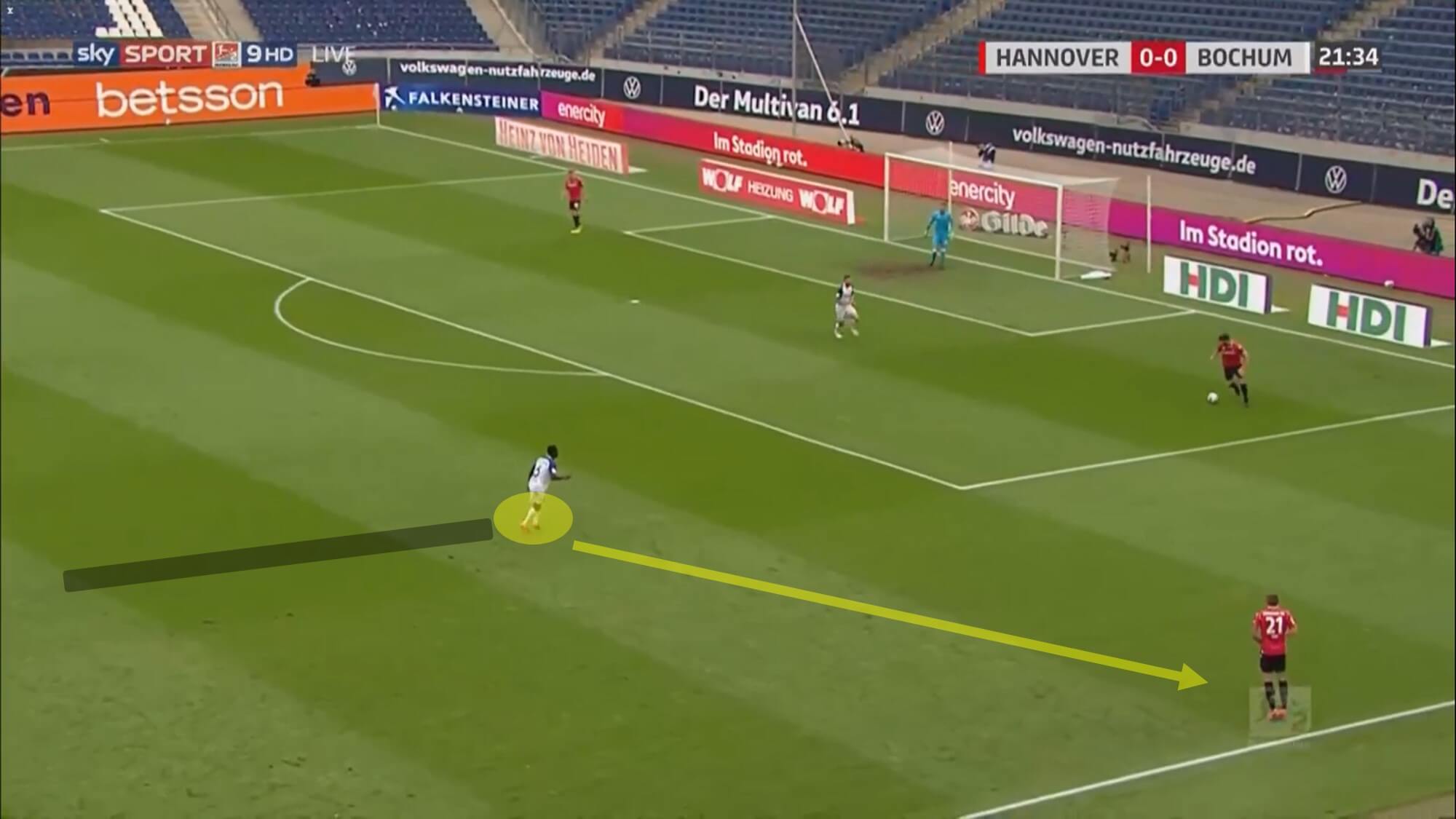 Out of the shot, there was a central midfielder directly behind him. Osei-Tutu is blocking him with his cover shadow, meaning that the passing lane to that midfielder is blocked. The fact that he isn’t running towards the ball means that he’s able to change his body position depending on the situation. For example, if the Hannover central defender played a ball into midfield, he’d be more likely to be able to intercept that pass due to his more static positioning, as he’d be able to shift to the side more easily.

He’s also within a close enough distance to press the left-back, which, due to his clever positioning, is the only safe pass to play in this passage of play. As play advances and the left-back receives possession, Osei-Tutu presses him with a curved run. 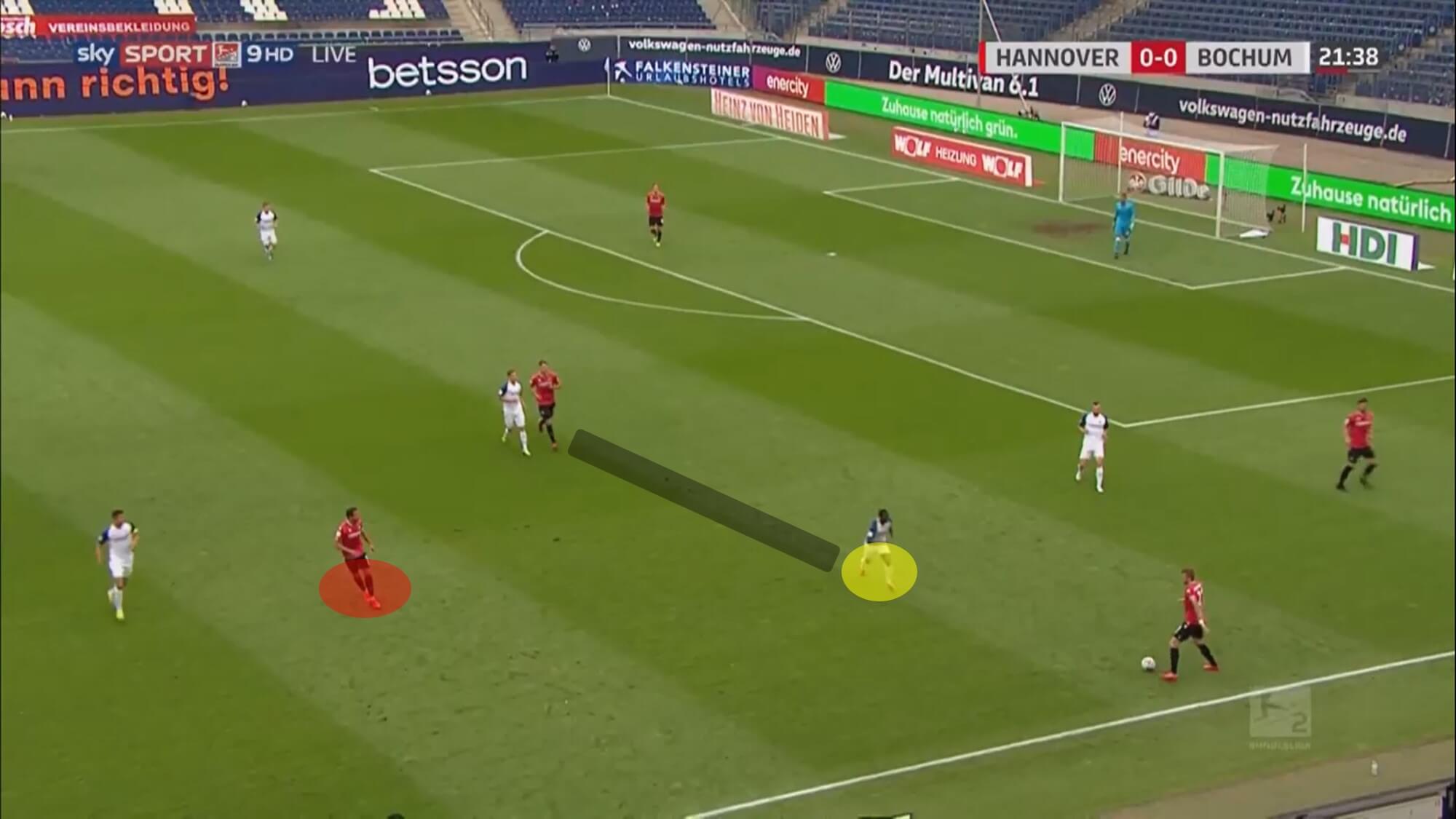 This keeps Hannover’s holding midfielder in his cover shadow, meaning that the passing lane is blocked. Osei-Tutu’s clever pressing means that there’s only one forward pass on for the left-back (to the player circled in red). The Arsenal youngster is aware of this, so it’s easy for him to read the direction of the pass and block it.

The 21-year-old has pace in abundance, and he covers the ground quickly in defensive transitions. He’s excellent at stopping counter-attacks, as he does in the images below. 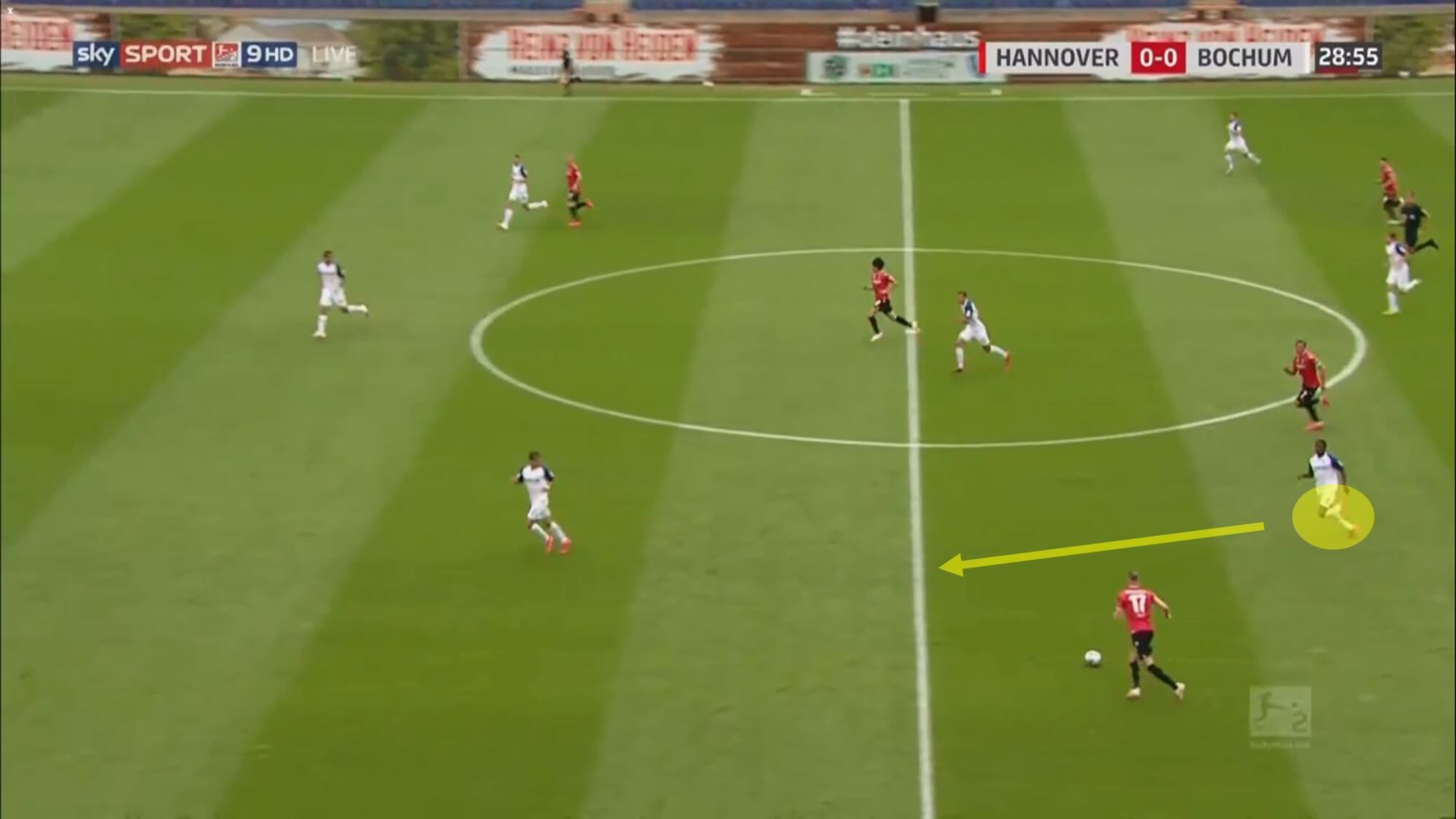 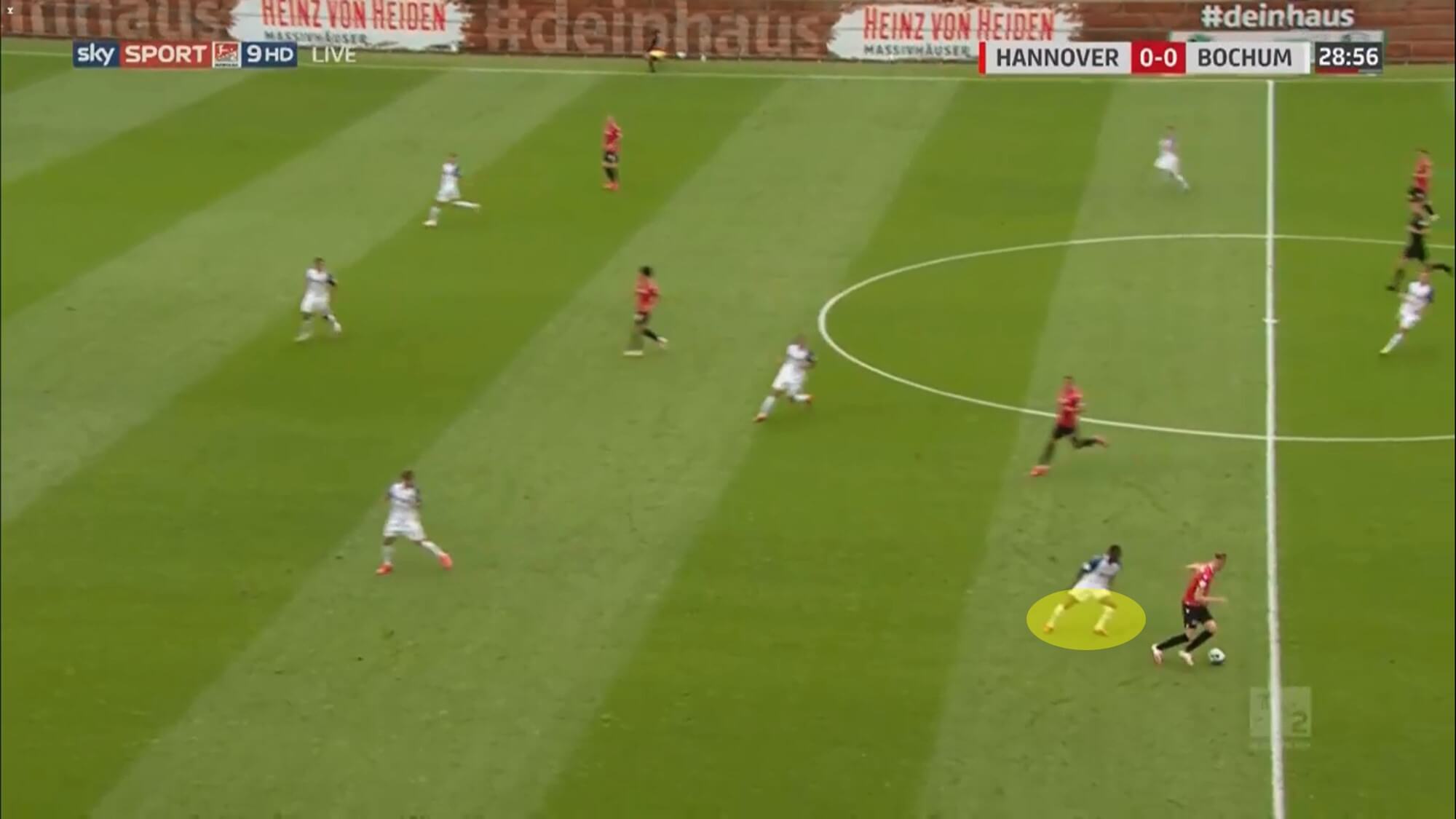 His recovery pace and willingness to get behind the ball stop opposing teams from being able to play forward easily on the break. In this situation, the Hannover player was forced to pass backwards.

Osei-Tutu contributed five goals last season, and he boasted one of the best strike rates out of all wingers in the division. As well as showing his defensive ability, Osei-Tutu displayed his energy by playing in a very advanced role when Bochum had the ball, particularly in offensive transitions. In counter-attacking situations, he’d often push forward onto the last line to play alongside Bochum’s lone striker. 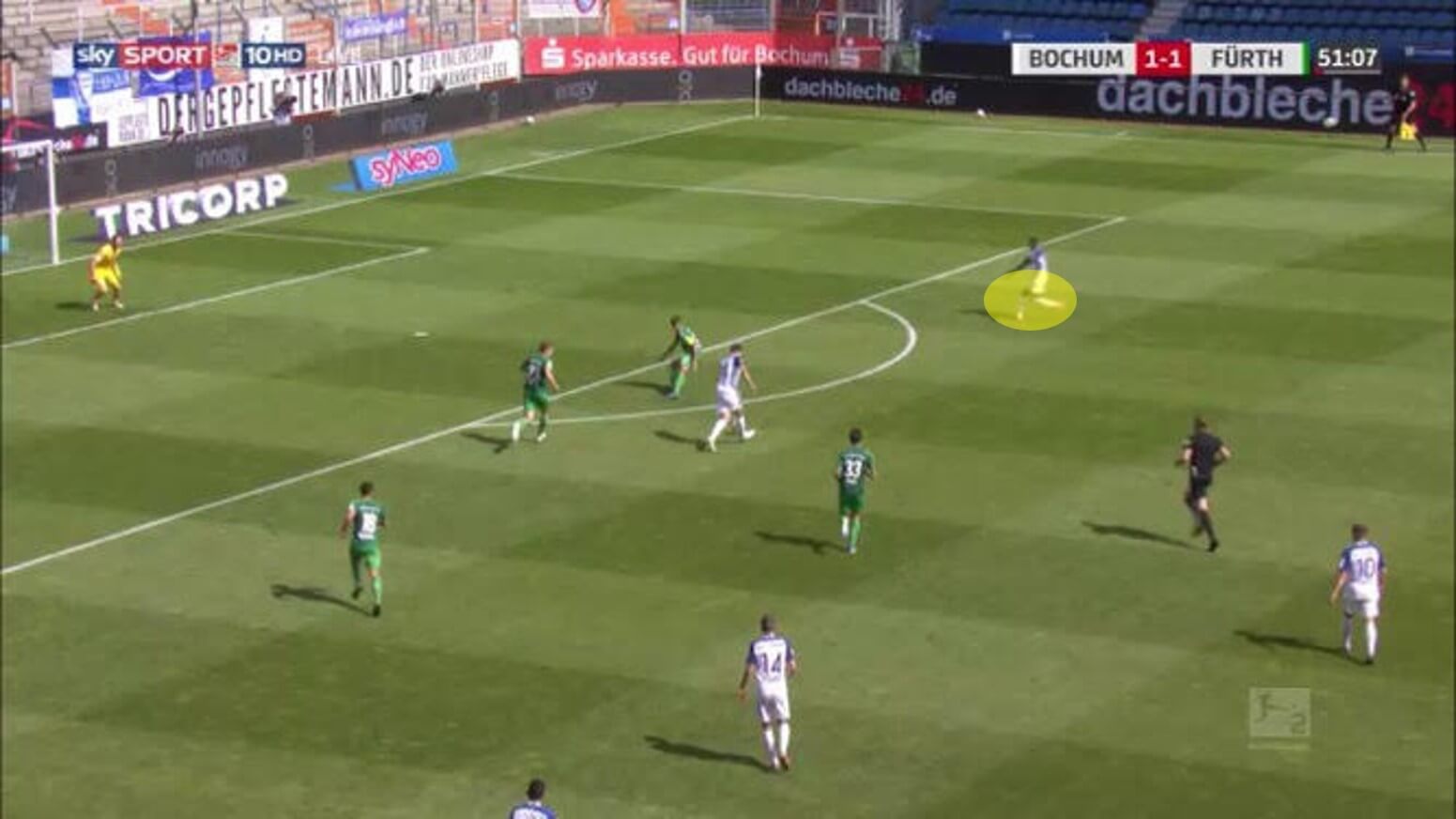 This is because when a team has the ball, their full-backs will often move into advanced positions to make themselves available for possession. If there is a quick turnover unexpectedly, these players are often out of position. Osei-Tutu likes to exploit that space. In this move, he received the ball in space, advanced through on goal and calmly slotted home into the bottom corner.

His overall xG for the season was just 1.59, which suggests that the pacey winger is an exceptional finisher. Below is another example of his ability to convert low xG chances. 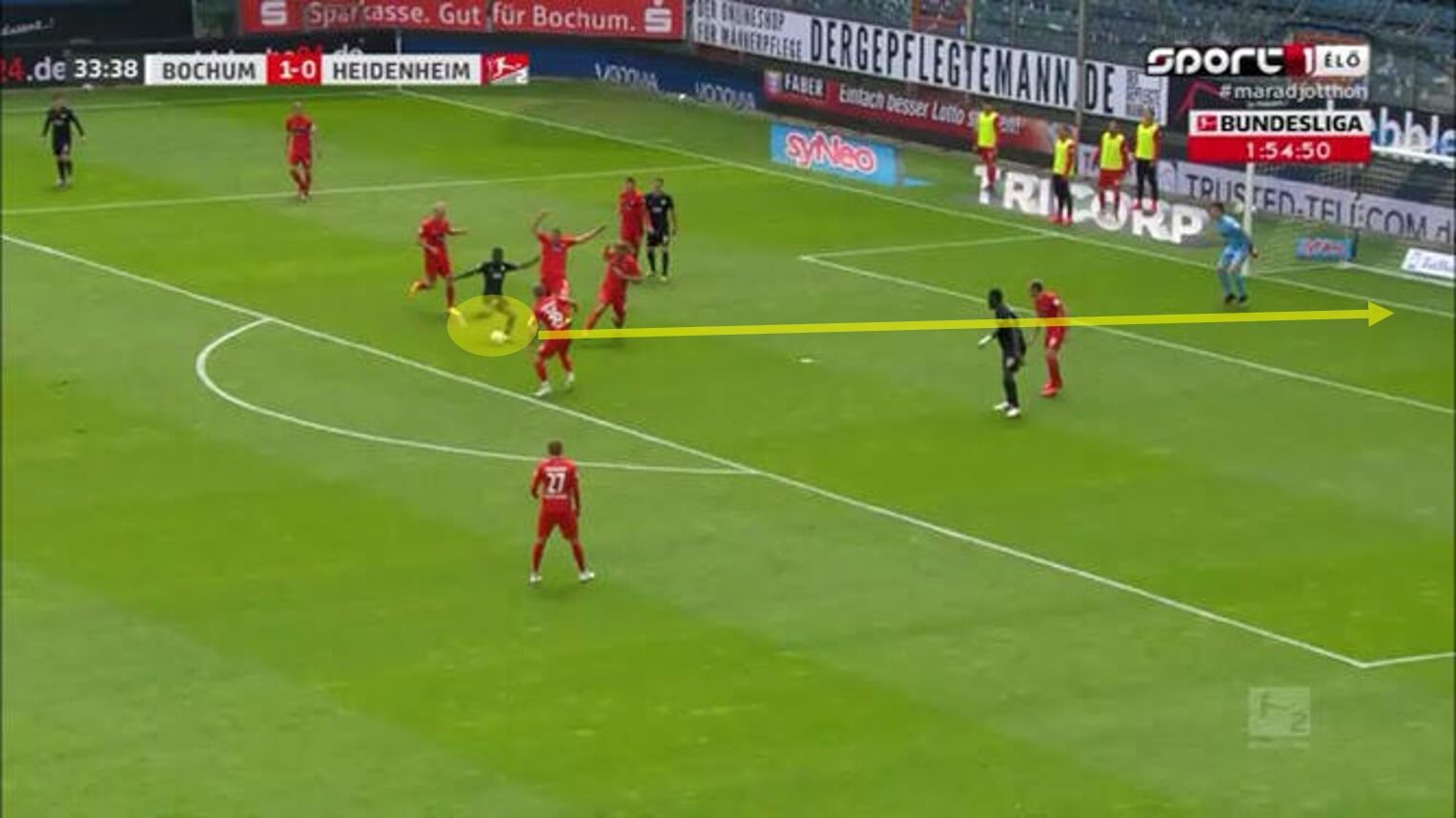 Despite being surrounded by defenders, he still manages to pick out his spot in the bottom right corner of the goal. He generally has a very good technique and is composed in front of goal, but he’s also capable of converting with the less ‘clean’ strikes that tend to roll into the bottom corners.

Osei-Tutu is a very direct winger when he takes defenders on. Instead of using fancy flicks, he’ll use rapid changes of pace to get past defenders. The image below is the kind of situation the youngster often finds himself in. 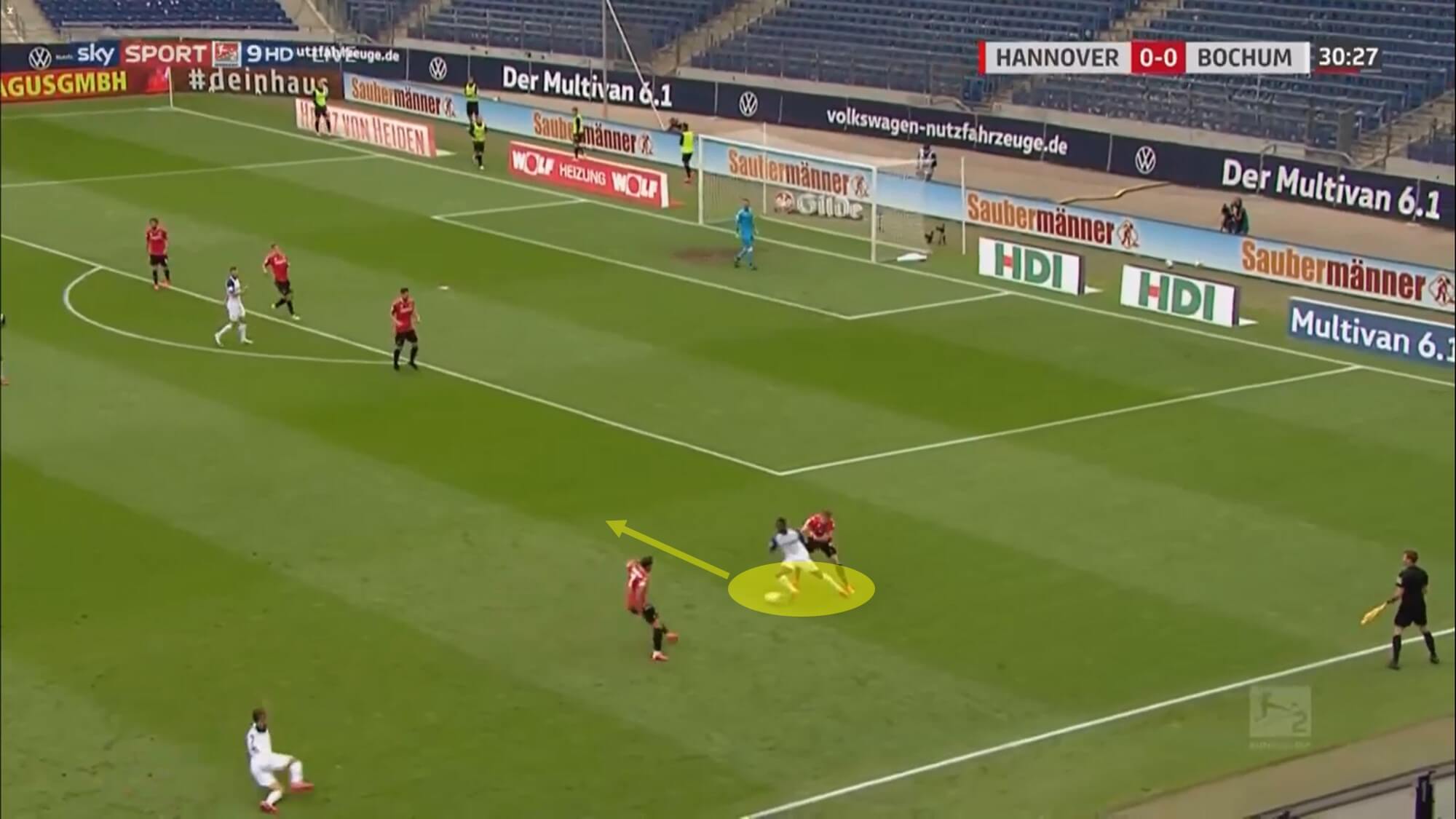 When receiving the ball to feet, he likes backing into full-backs and sticking his arm out to create a bit of separation between himself and his marker. He also makes sure he puts his back between the ball and the opponent, meaning that they’d have to go through the back of him to win the ball. Osei-Tutu appears to just be holding the ball up and slowing the play down at first, but then he immediately changed the pace by quickly looking to take the ball into space with the outside of his right boot. His tendency to quickly change the pace of an attack is difficult for defenders to deal with, as they get prepared to just jockey him before he quickly takes the ball in another direction. Cardiff’s new man can get away from oncoming challenges, thanks to his fantastic acceleration.

If Osei-Tutu begins the season as Cardiff’s first-choice right-back, he’ll need to make sure he’s able to defend 1v1s. This is a much less important skill when you play as a winger, but he’ll have that part of his game tested a lot more. His work rate and energy can’t be questioned, and the EPL loanee will have no problem getting up and down the flank. Osei-Tutu was very productive in front of goal last season, but it’s unlikely that he’ll be given the license to push up and join the striker when Cardiff are on the attack. It’ll be interesting to see if he can maintain a goal threat in a wing-back role.