One of the best goalscorers in European football history is called Filippo Inzaghi and nicknamed Super Pippo. And to find a female striker who is quite similar to him and has the same hunger and passion for goals is something really beautiful for those who love these type of players. Daniela Sabatino is just that. Not only is she quick but also a very technical player who can do more than just scoring goals, which is not a simple thing in itself.

This player has been remarkably influential whenever she played during almost all the seasons of her career and contributed with a large number of goals for each club she played at. Her career started at the age of 15 at Autolelli Picenum, then AC Bojano and Sporting Casalnuovo before heading to Switzerland to play for Rapid Lugano and coming back to Italy after one season and scoring 61 goals in 88 matches with Reggiana.

The peak of Sabatino was in 2011 when she was playing for Brescia since she was selected as the leading goalscorer that year and reached 162 goals in 198 played games with Brescia in total. In 2018, Sabatino left Brescia to play for Milan and helped the team play in their first season in Serie A.

Last year, Sabatino played with Sassuolo and at the end of the season moved to Fiorentina, a team that will participate in the 2020/2021 Champions League and will surely compete for the first spots in Serie A Women. This opportunity was exploited in the best possible way by Sabatino who was able to score five goals in just two matches of 2020/21 Serie A Women.

Therefore, this tactical analysis article in the form of a scout report will aim to analyse Sabatino’s attacking and defensive abilities while looking at how she can improve Fiorentina’s attacking performance and how she fits in the squad. Moreover, an analysis of her movements with and without the ball will be provided while taking the tactics of the team into consideration.

Playing for a team that competes for the Serie A title and for the Champions League as well, is not the easiest of tasks for players. But at the same times, talented and passionate players like Sabatino find more motivation when playing with extra pressure to win.

Antonio Cincotta, Fiorentina’s coach, preferred to use Sabatini alongside another powerful striker like Tatiana Bonetti in a 4-3-1-2, making use of the two experienced strikers existing in his team while also backing them with a trequartista to link between them and the midfield. In this regard, Sabatino plays a very noticeable role since she drops a lot to midfield to contribute in the build-up and provide additional options when the team is being pressured.

Her accurate passing abilities and creative decision-making allow her to execute this important role successfully most of the times and she has already done it multiple times during her first two appearances with the team against Inter and Napoli.

Also, playing with another striker allows Sabatino to have more freedom in movement as she drops a lot to receive the ball in midfield, acting like an advanced playmaker or a midfielder and leaving her teammate up front as a striker.

This switch of positions can be very effective in matches where there are few ways-out of marking since these movements can easily confuse defenders and create spaces in their back once performed accurately.

Nevertheless, Sabatino can be extremely dangerous even when she doesn’t change her position. Her shooting capacities, accelerations and movements in the box can create problems for any defence, and with the existence of another striker just beside her, a lot of tactical combinations can be created between the two to break down the opposing defence and Antonio Cincotta will surely be working on creating some to enhance the team’s attacking solutions. 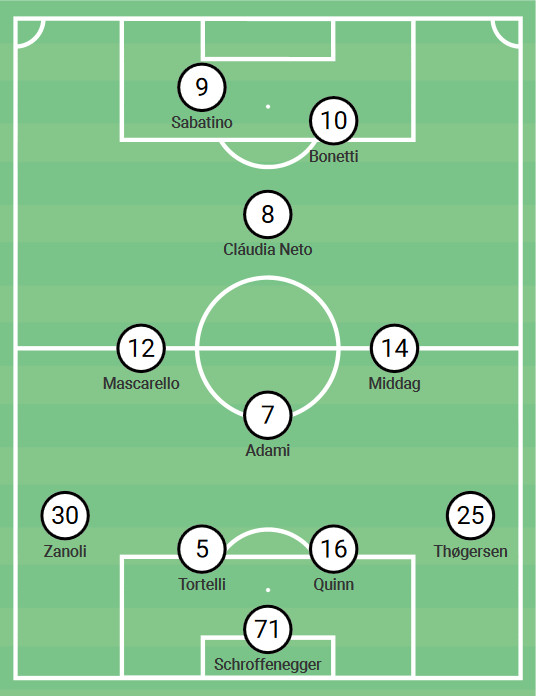 Movements in the final third and in midfield

As mentioned above, Sabatino is not a static striker who plays just to score goals or moves just in the penalty area. She is a player who moves to the right and the left wings to provide passing options, and drops to midfield in order to destabilise opposition’s defence by either winning fouls or serving the other striker of the team who would be having more free space since Sabatino always keeps one or two defenders marking her.

During her first game with Fiorentina, she started directly to play this important role by dropping to midfield and making the right decision according to her teammates’ positions and to the number of defenders/midfielders marking her. In this case in which she dropped to the center against Inter, she knew that she was surrounded by three defenders who were able to intercept her pass, and therefore she intelligently kept possession of the ball and protected it with her body to win a free-kick for her team. 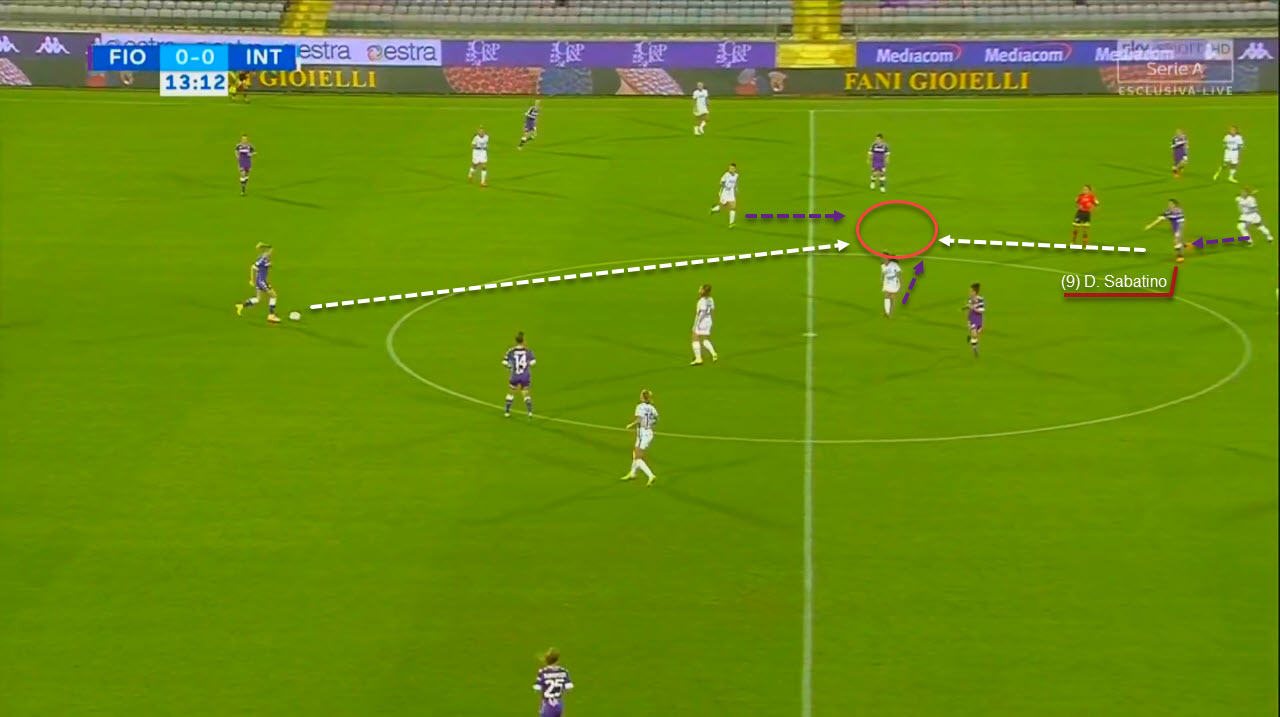 In addition to her movements in midfield, Sabatino is very agile in the final third and knows how to escape marking especially before receiving the ball in cases where she runs with defenders and while waiting for the ball. Her physical abilities make her very difficult to stop or catch and she is aware of this, that’s why she uses her accelerations and some smart misleading feints at the same time to escape marking.

This skill usually works for her as she wins duels with her direct markers using these feints when running, like in this example in which she distracts Inter’s defender by doing zigzag feints before getting the ball and winning time over her direct marker in a very dangerous area. 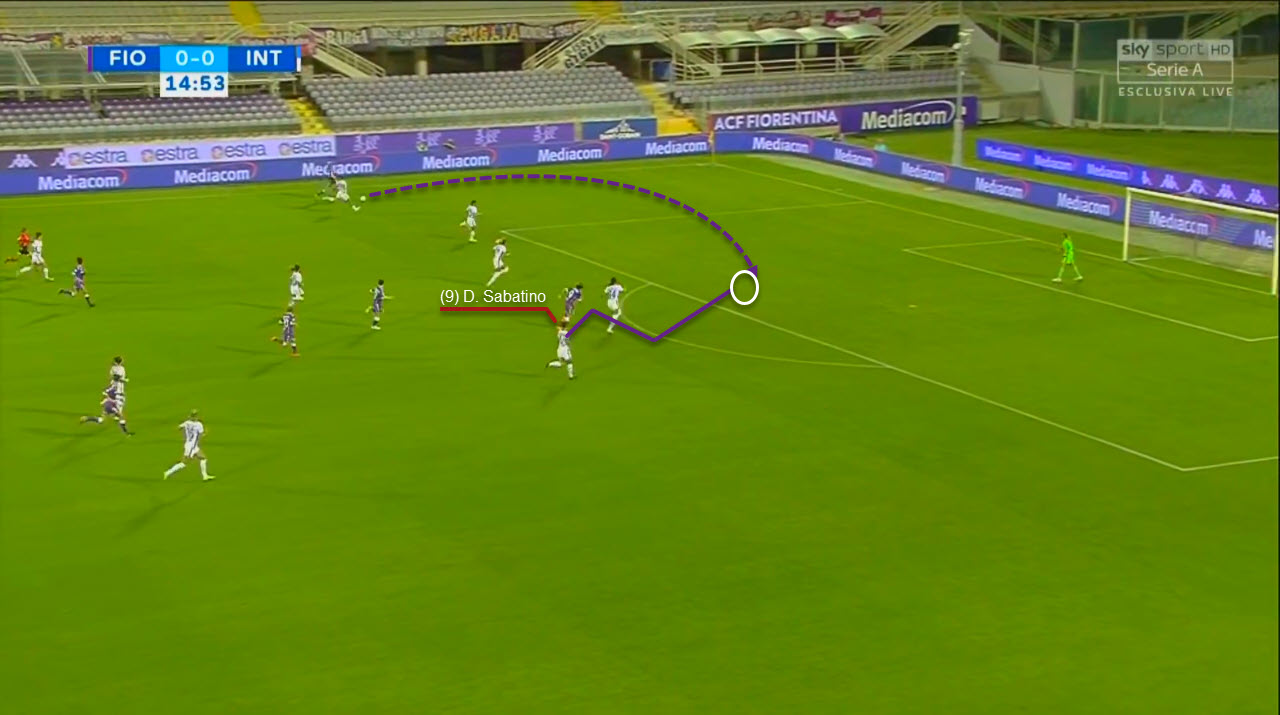 Another aspect that is very important and rare among strikers is the defensive and pressuring capacities and willingness of Sabatino to support her teammates and fight for the ball in midfield. In other words, Sabatino does not only wait for the ball in the final third or drop back only when the team possesses the ball. She drops back a lot to help the defence and midfield to win the ball back especially when she is the one who loses the ball.

Yet, this defensive effort should be always monitored in order to preserve the adequate energy for the player’s attacking movements, which is something that both the player and the coach are surely aware of. 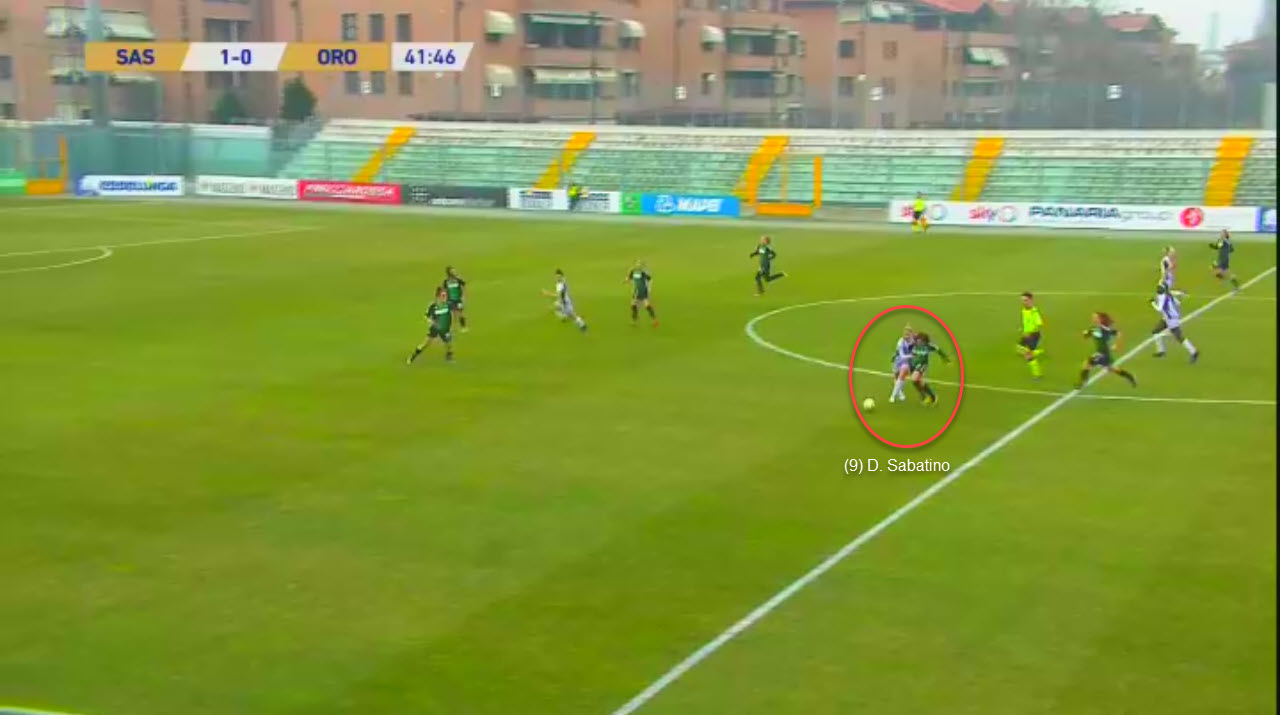 It is true that Sabatino is not a tall woman, yet she is very good with her header shots, having an average of 46.2% on target, as she wins 42.9% of aerial duels. She is able to score from corners or even from simple crosses from the wings. She has done so a lot even with Milan and against her current team, Fiorentina, like this example shows. She bravely gets between the two defenders on the near-post and scores a goal with a well-hit header. 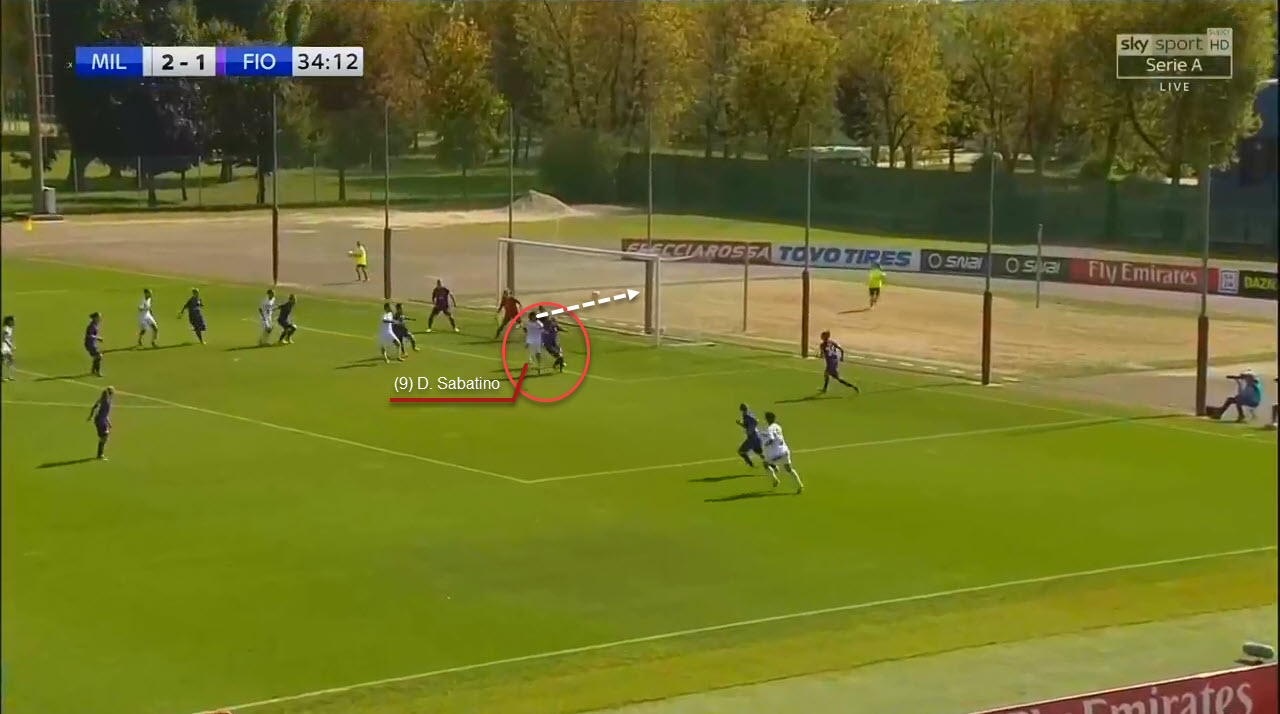 In addition to headers, Sabatino is an excellent finisher in the penalty area. She has the sense of the goal and moves so quickly to get the ball before defenders and exploit the passes of her teammates. She has scored many beautiful goals and less beautiful goals from this area by anticipating defenders and kicking the ball at first-touch, and she is continuing to do so at the start of the 2020/21 season since she has scored a goal at first-touch against Inter when she received an accurate pass in the box. 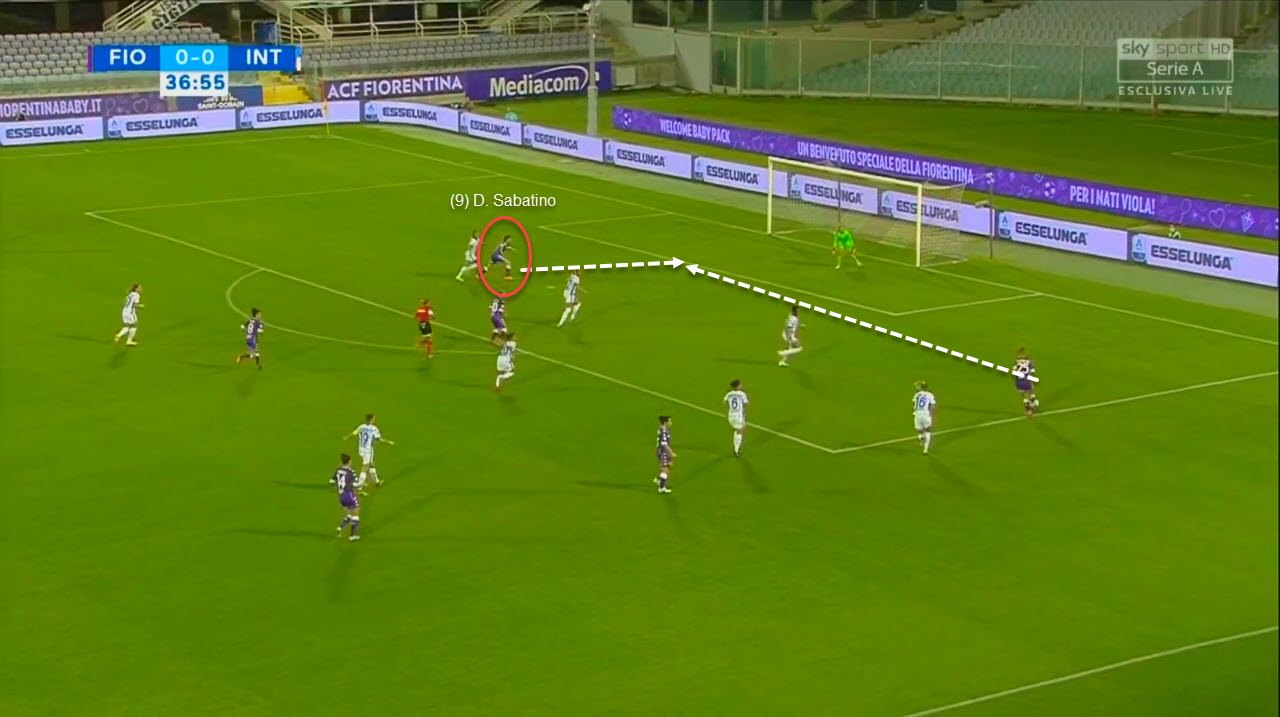 And what helps her in this is her perfectly-timed positioning inside the box whenever the ball is coming towards her. During last season, she had a finishing percentage of 58.3%. But this year, with a more competitive team like Fiorentina, Sabatino is more likely to increase this percentage like she did in previous seasons.

Moreover, this player is always attentive in the box and waits for the right opportunity to exploit every possible chance. Also, her dribbling skills enable her to pass from any duel successfully. Last season, she had an average of 72% successful 1 vs 1 dribbling and she uses these skills even when facing goalkeepers like in the picture below that shows how she was about to dribble past Orobica’s goalkeeper on the left and score a beautiful goal for her team, Sassuolo. 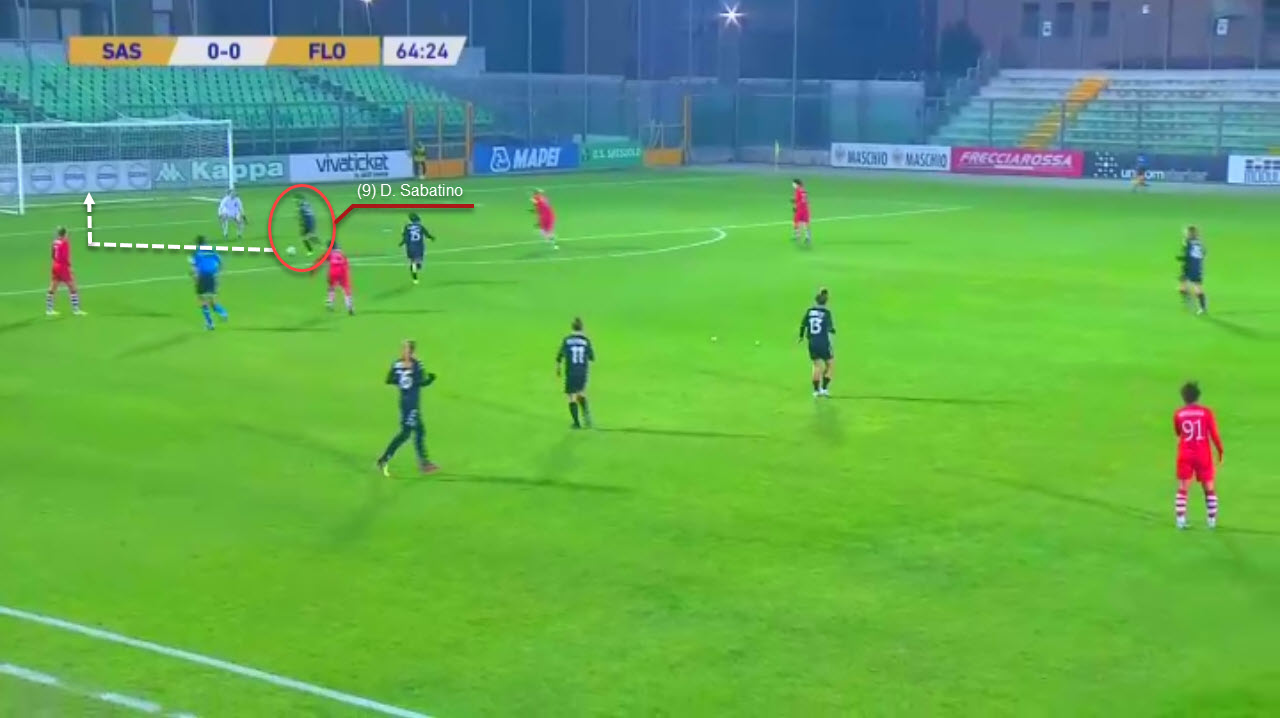 Added to that, Sabatino can also be crucial when she drops to midfield, not only by distracting defenders but also by providing key passes to her teammates upfront. And this aspect needs to be concentrated on by Fiorentina’s coach, to get the best out of Sabatino’s accurate passes since she has a striking average of 85.7% accurate long passes per game and 83.7% of simple pass accuracy.

These stats are quite impressive for a forward and therefore these playmaking capacities need to be exploited in the best possible way at Fiorentina to create more goal scoring chances for the team. Sabatino played this role in a remarkable manner previously when she played for Sassuolo and even for her older teams. And you can see in this picture from a Sassuolo match how she acted like a trequartista and provided an assist to her teammate, enabling her to score an apparently easy goal with one simple touch. 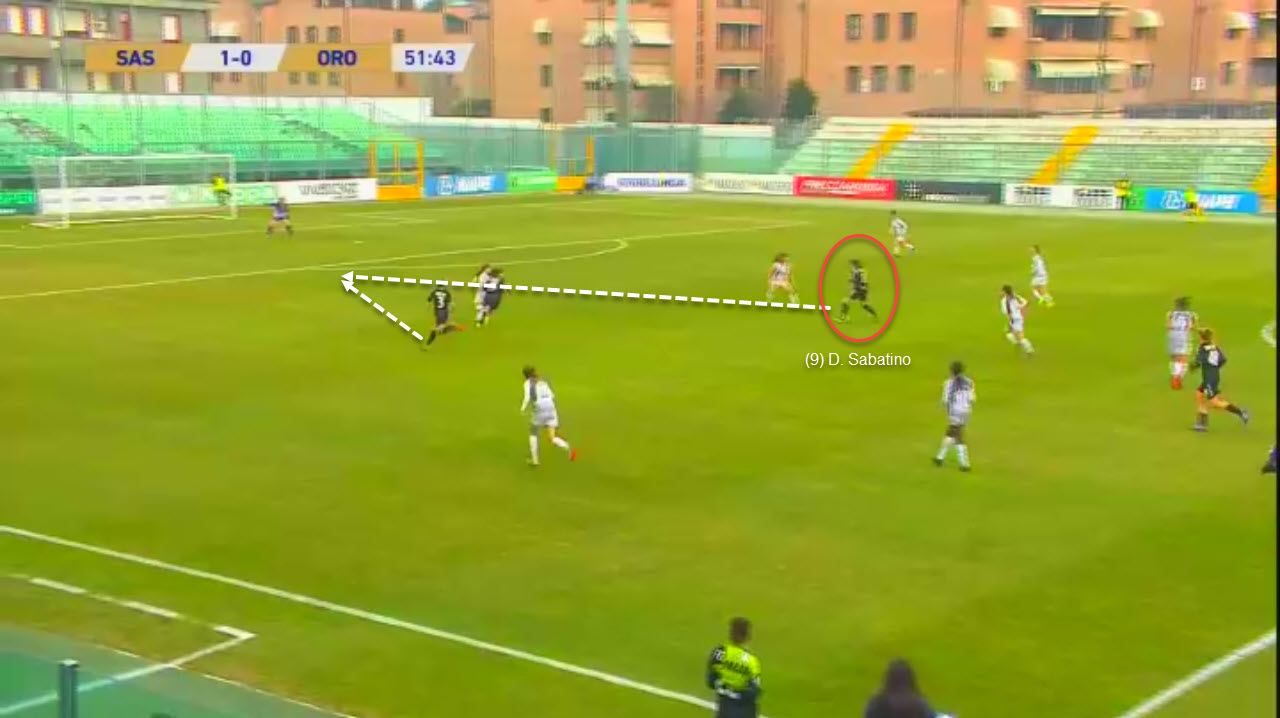 Daniela Sabatino is one of Italy’s best female strikers who can still perform very well with the national team during the next competitions and will certainly help Fiorentina in competing with the tough opponents of the Champions League as well as in Serie A.

On a personal level, playing in a well-organised team like Fiorentina with a lot of talented players will only make Sabatino rejuvenated again and help her break her last seasons’ records in terms of goal scoring. And this can be already noticed from the first two matches with Fiorentina since she has already scored five goals.