We saw in the recent Austrian Bundesliga campaign not just great football, but also several outrages. LASK Linz made a team training during the lockdown what was back then not allowed and due to that, the Austrian football association subtracted four points from them. Also, at the end of the season, their head coach Valérien Ismaël had to leave the club and got replaced by Dominik Thalhammer.

Meanwhile, Mattersburg became insolvent meaning that the club would not get the licence for the Austrian Bundesliga for the upcoming season. Therefore, all of their players were suddenly free agents.

Andreas Gruber who was since 2017 at Mattersburg joined then LASK Linz as he was one of the stars of Mattersburg. In this scout report in the form of a tactical analysis, we will look at the qualities of Gruber and how he will fit into the tactics of LASK Linz.

In this first part of the scout report, we will have a very quick look at Gruber’s role at his former club Mattersburg to then look at his style of play and lastly we will talk about his role at LASK Linz especially based on his first appearance for the team in the first round of the ÖFB Cup.

The Austrian played at his former club as a winger, offensive midfielder and occasionally even as a striker. However, the clear majority of the time he was a right-winger what we can also see in the heatmap for all his matches in the recent season in the Austrian Bundesliga. He played overall in 20 games and was 1652 minutes on the pitch in the Austrian Bundesliga even though he had to fight with injuries showing that he was in the recent campaign among the key players of Mattersburg. 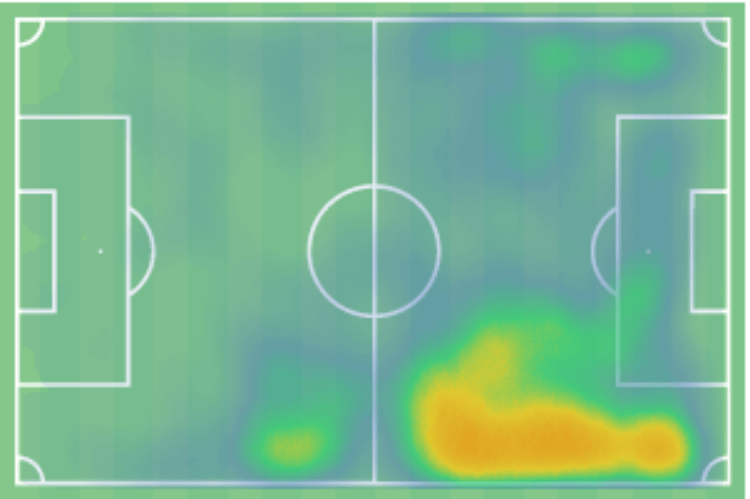 In his heatmap above it stands out that his preferred area of the pitch is clearly the right-wing, but that he also likes to be active in more central areas of the pitch. As already mentioned prior in this tactical analysis, he got also used as offensive midfielder or striker in the past, but you saw that he feels most comfortable to have his starting position for his actions on the wing.

When he played for his former club in the wide-area, he had the task to stretch the game by being positioned close to the touchline. A perfect example for that can be seen in the example below as he is positioned wide to create some distance between him and the opposing full-back and additionally he uses the full width of the pitch. 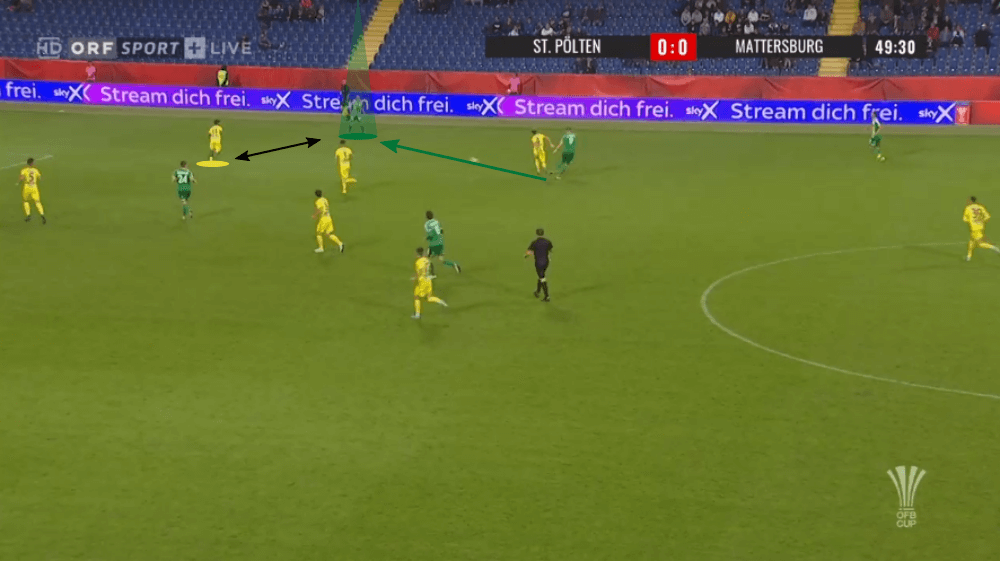 To know the basic idea of Gruber‘s role at his former club is important firstly to then understand his style of play and how he was able to exploit in this role his strengths and secondly to then see how he has to adjust to his new tasks at LASK Linz.

Gruber is basically a player who loves to have the ball at his feet, but doesn’t keep it for too long and is always looking for a teammate who is positioned better. He likes to create chances for his teammates but also is a winger who wants to go for the goal by himself. The 25-year-old scored in the recent season in the Austrian Bundesliga in 20 appearances 12 goals. The whole team scored in this campaign only 39 goals in their 32 league games and Gruber was the player with the most goals.

However, he loves to play long switches from one side of the pitch to the other one. The Austrian has a good feeling for when this pass is appropriate as he waits until the opponents shift over to the side where the ball is located to then exploit the space on the opposing side. We saw during the last season such long passes quite frequently from the Austrian. 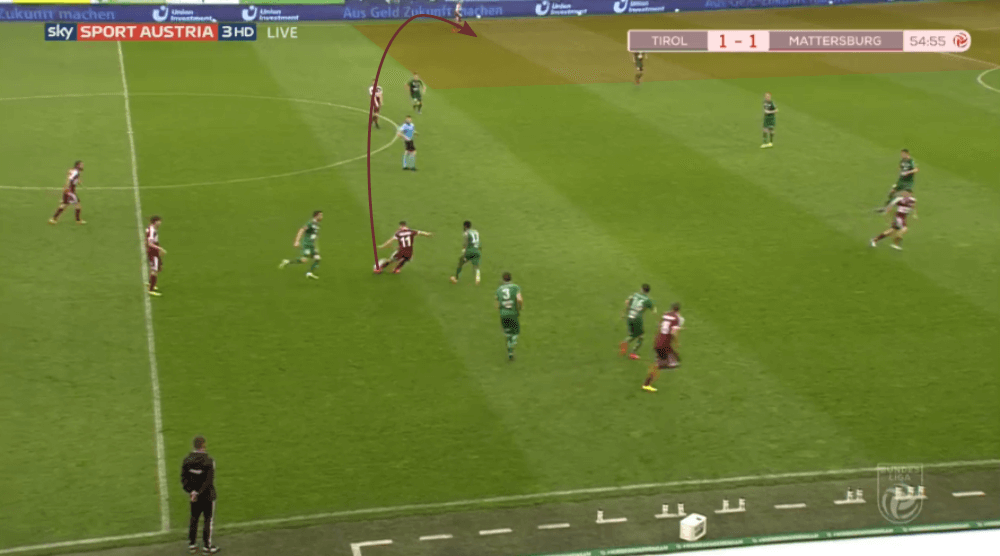 To play such long switches, the player needs the necessary vision and also the technical abilities to execute such actions. Both of these abilities are central strengths of the 25-year-old and help him not just during the progression of the ball, but also in the final third to create chances.

Additionally, he has for his appearances in the Austrian Bundesliga 2019/20 an overall xA-value of 2.38 and is in this category also among the best wingers of the league. However, he provided only one single assist in this season and a central reason could be that he played for the team which scored the third-fewest goals.

Below, we can see a situation in which the opposing keeper has left his goal, but Gruber stays calm to find his teammate at the second post with a perfect cross. However, his teammate managed to do not score as completely misplaced the shot. 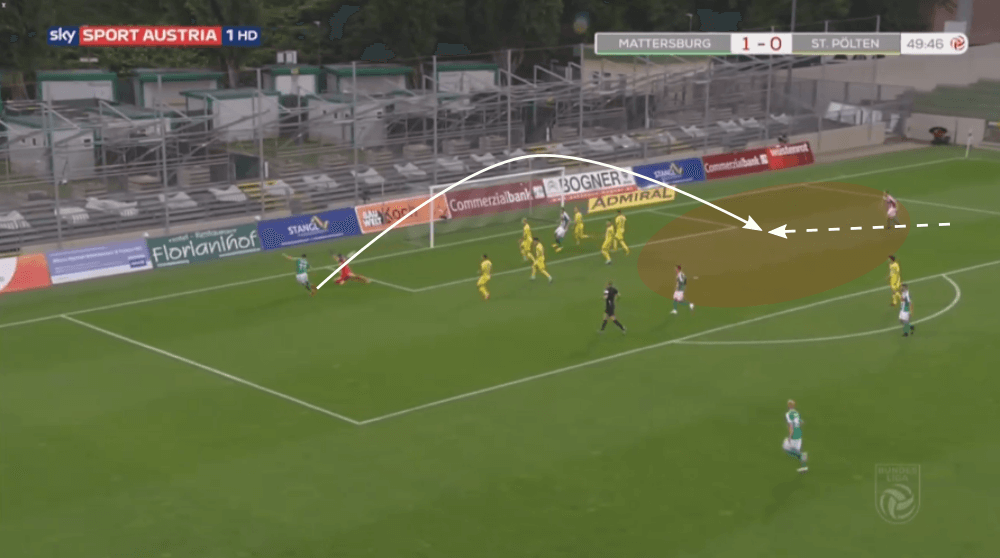 Also, Gruber is not a typical winger who purely relies on his pace. The Austrian is quick with the ball at his feet, but his speed is clearly not his deadliest weapon as it is not that overwhelming. Instead, Gruber tries to overcome his opponents and create space for himself especially with the aid of quick changes of direction. The 25-year-old is solid in one-on-one duels, but it is clearly not his absolute strength. We can see an example of his typical change of direction below as he fakes a cross to then dribble to the centre. 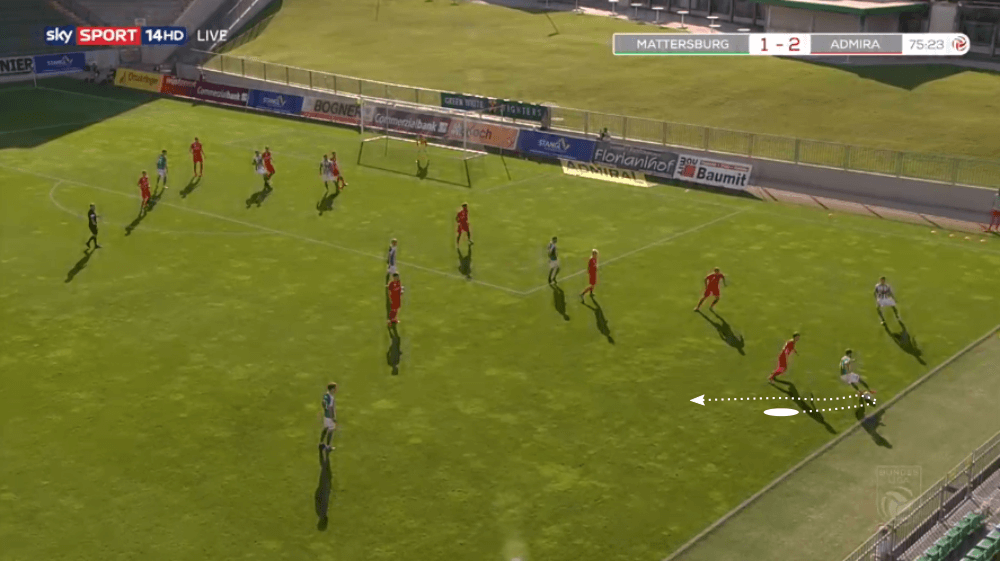 As already mentioned prior in this part of the tactical analysis, Gruber was Mattersburg’s player who scored the most goals in the recent campaign. With 0.65 goals per 90 minutes, he is the winger with the best value for this category in the Austrian Bundesliga. Additionally, he has for the recent season an xG-value of 0.31 showing how confident he is in front of the goal.

The aspect that Gruber always stays very calm in front of the goal paired with his decent shooting technique are the central reasons why he outperformed his xG-value that much. In the shot below we can see a situation as he received a cross at the second post, stayed calm and placed the ball in the top left corner against his new club LASK Linz. 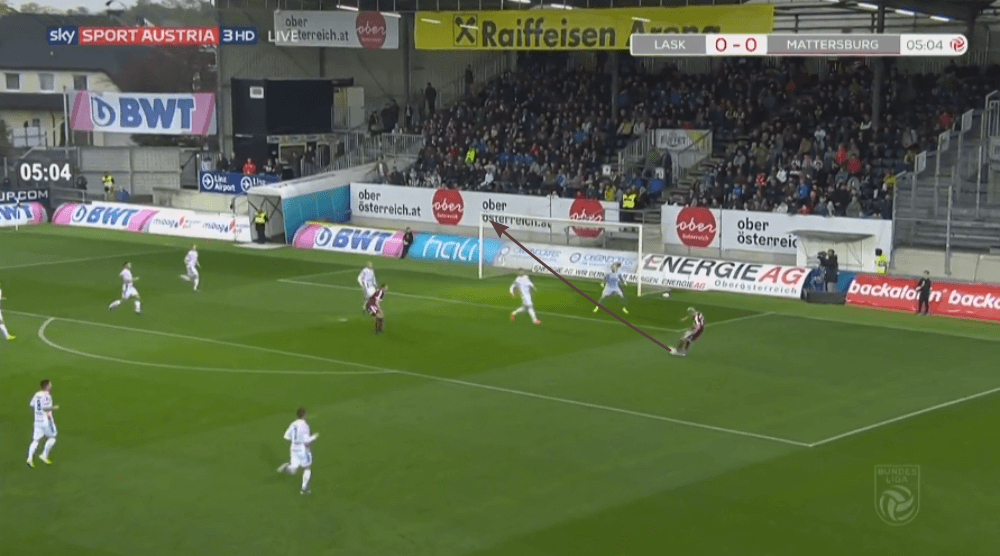 Besides Dominik Szoboszlai of RB Salzburg who is linked in this summer with clubs like Borussia Dortmund, PSG or AC Milan Gruber is probably the winger with the best shooting technique in the Austrian Bundesliga. Especially the way he takes volleys in mid-air is quite astonishing. We can see an example below as he scores with a beautiful shot. 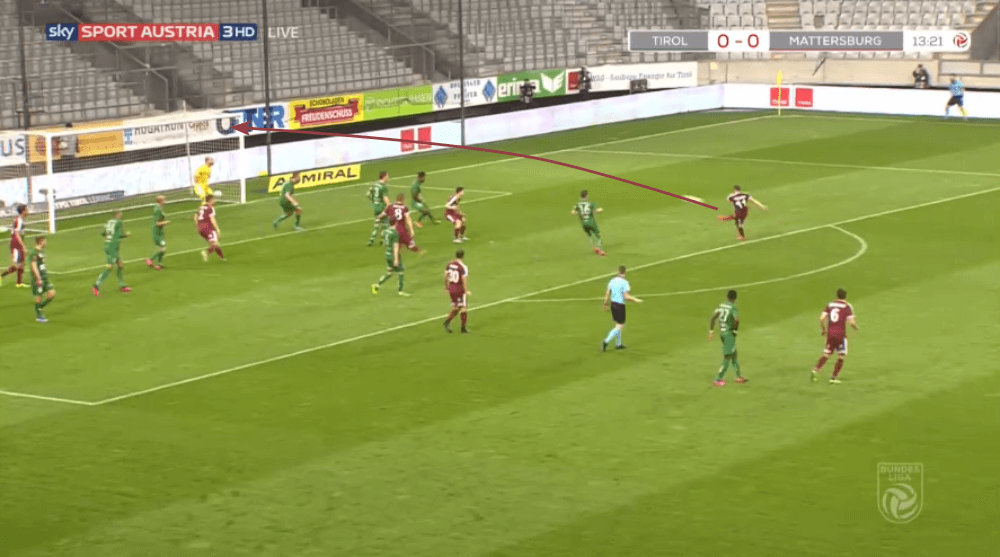 His new role at LASK Linz

Besides the question how well and quickly Gruber will adjust to his new role, the second concern is how he will perform in a stronger team since at Mattersburg he was among the very best players of the club which is not the case at LASK Linz. In the first competitive game for his new club in the ÖFB Cup against Siegendorf from the fourth Austrian division he got subbed on, scored instantly a goal and showed overall a decent performance. In this part of the tactical analysis, we will focus on his role in this match paired with my knowledge about the style of play of LASK Linz.

Thalhammer took over the team after the last match of the Austrian Bundesliga 2019/20 and his first game in charge was the second leg in the UEFA Europa League against Manchester United. Since LASK lost the first leg 0-5 it was clear that they wouldn’t throw the Red Devils out from the tournament, but still, it was interesting to see if the tactics of LASK Linz changed under Thalhammer. Besides little adjustments during the high press, the tactics stayed similar and especially the roles of the wingers stayed about the same as under the two prior coaches Ismaël and Oliver Glasner.

In their typical 3-4-3, the wingers have the task to occupy the half-spaces between the lines of the opposition since the wing-backs provide the width and have the freedom to rush forward. The wingers should open up passing lanes towards them to be an option for a line-breaking pass. Gruber did in his first game pretty well and often received passes exactly in that space as we can see below. 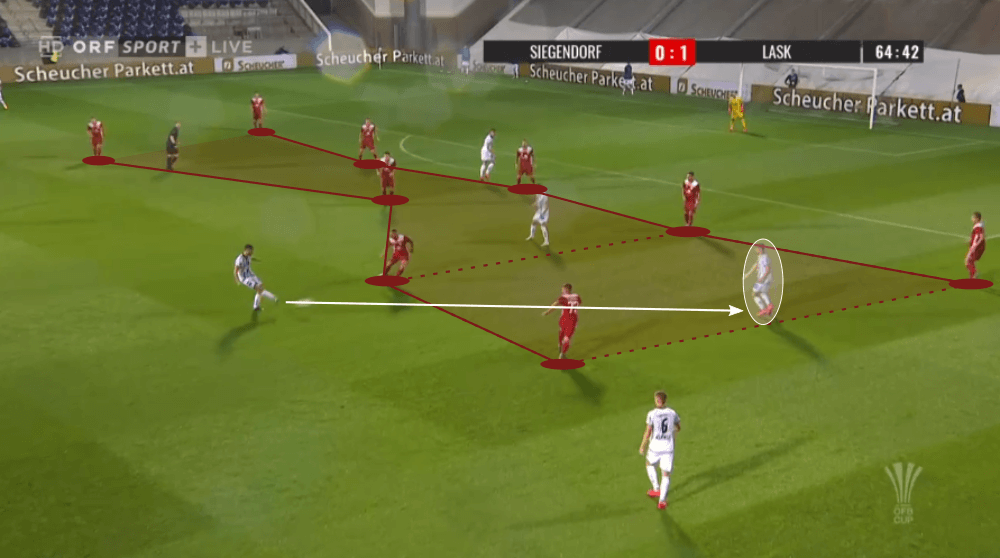 More important than strictly occupying the half-space is that the wingers should communicate and work together with the wing-backs. They mustn’t be positioned in the same vertical zone to avoid that they limit their options. Therefore, when the wing-back (on the right side mainly Reinhold Ranftl) moves into the half-space, the winger has to move out to provide the necessary width. We can see an example below as Gruber does exactly that. 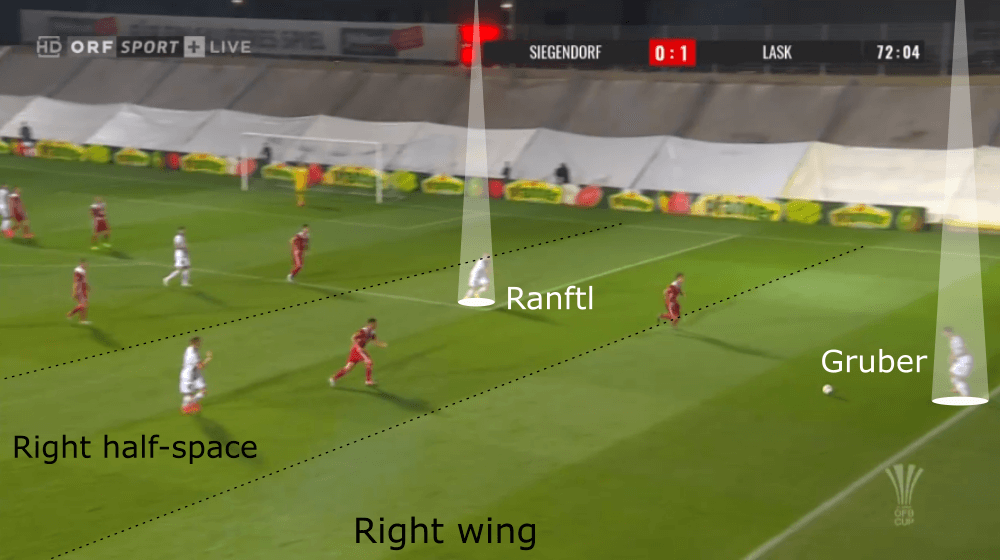 LASK Linz is a team which do not just rely on a build-up with short passes but also use long balls to progress the ball. The defenders try then to find either the central striker or the two wingers who then should either lay off the ball or fight for the second ball.

The 25-year-old Austrian seems to also perfectly understand that part of his new role as he moved cleverly in the free spaces to give his defenders and option for a long pass. He then used his vision and technical abilities to lay off the ball for Ranftl. 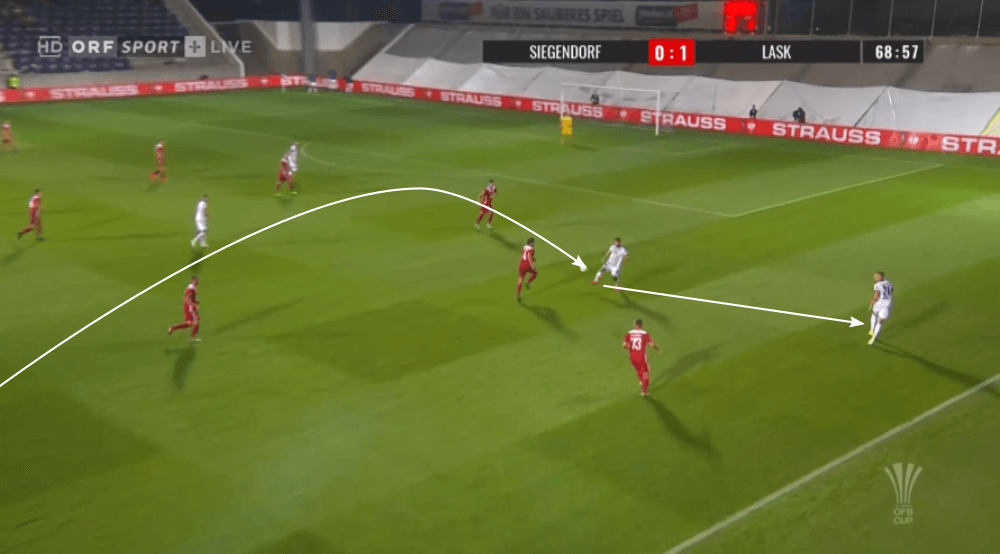 Since Gruber will be from now on more frequently in the half-spaces and not that often on the wings as he used to be during his time at Mattersburg, he will probably swing in fewer crosses from the wide-areas. However, the central forward Marko Raguž is the target for most of the offensive actions of Linz and they also try to find him often with crosses or long balls behind the last line of the defence.

Gruber tried exactly that from a more central position in the ÖFB Cup fixture as we can see in the example below. Even though it is not a typical cross, it is also a situation in which he exploits his vision and technical abilities to play a good ball towards Raguž who is unfortunately unable to score. 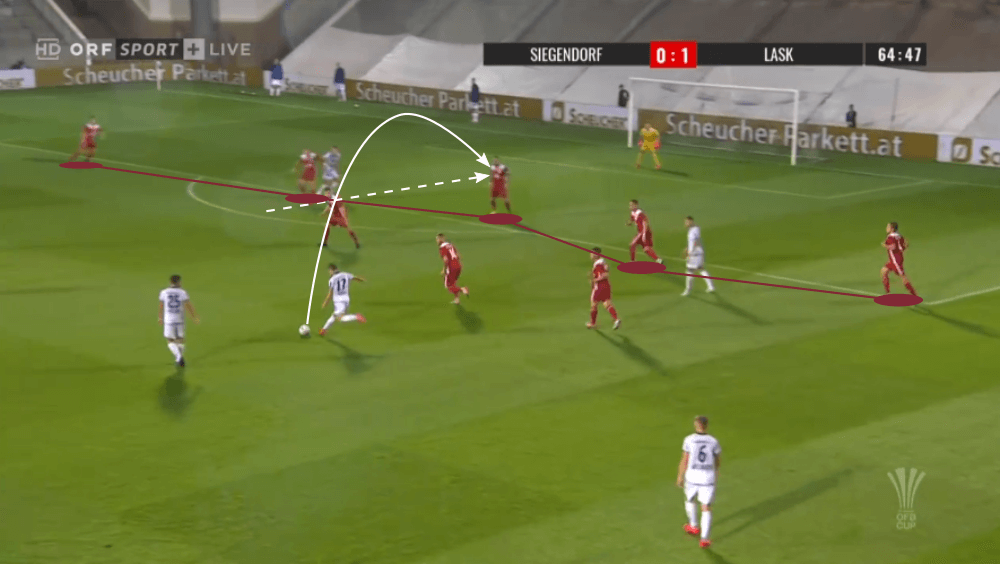 Another central aspect of the tactics of LASK Linz is the counter-pressing and high pressing respectively. This basic idea of how they want to play football was brought to the club by the current Wolfsburg coach Glasner and is since then an important part of their philosophy.

Gruber is not particularly strong in defensive duels, but his aggression makes him a perfect suit for these tactics. We saw that in his first match for his new club as he worked hard after losing the ball to instantly recover it. An example is visualised below. 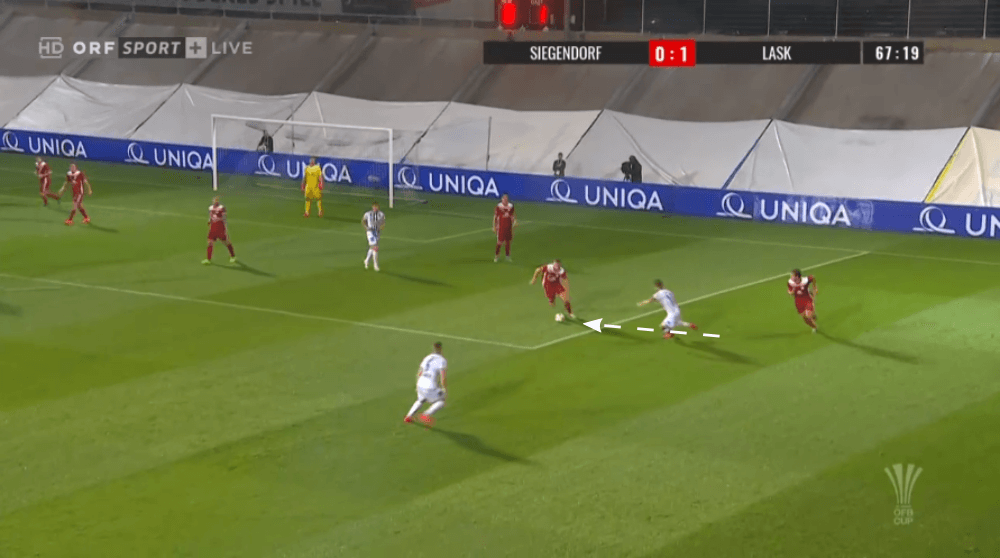 After the departure of Dominik Frieser who joined the EFL Championship side Barnsley and the current long-term injury of Thomas Goiginger, Gruber and Husein Balić will likely be the two first-choice wingers in the 3-4-3.

Even though his role at the new club is quite different compared to his time at Mattersburg, Gruber has the necessary qualities to become an important player for LASK Linz. However, we have to wait and see how he and LASK Linz perform in the upcoming season.