Almost five months were between the first leg and the second one between Manchester United and LASK Linz in the round of the last 16 teams in the UEFA Europa League. The Red Devils were able to win the first leg back in March in Linz with 5-0 and due to that, it was already clear that they would go through to quarter-finals.

However, due to several reasons, this game still was interesting. Firstly, it could be an indicator to see how good Manchester United are after their little break since the final matchday in the English Premier League. Secondly, it was the first game under the charge of LASK Linz’s new head coach Dominik Thalhammer as Valérien Ismaël got sacked after the last game in the Austrian Bundesliga.

In this tactical analysis, we will look at both teams’ tactics in this game and explain the reasons for the 2-1 victory for Manchester United.

Ole Gunnar Solskær gave in this game several players who didn’t play that much in the recent weeks the chance to show themselves. Sergio Romero was in goal and the back four in front of him was made out of Brandon Williams, Harry Maguire, Eric Bailly and Timothy Fosu-Mensah. Fred and Scott McTominay played in the central midfield together with the more advanced Jesse Lingard. Daniel James and the former Chelsea man Juan Mata were the wingers while Odion Ighalo was the lone striker.

Without that much of a surprise, Thalhammer went with the 3-4-3 which is since Oliver Glasner’s time at Linz typical for this side. Alexander Schlager was the keeper and Gernot Trauner was the boss of the back three as always. Philipp Wiesinger and the young Andrés Andrade completed the back three. The midfield four was the usual one with René Renner, James Holland, Peter Michorl and Reinhold Ranftl. Marko Raguž was the central striker and he got supported by Dominik Frieser and Husein Balić. 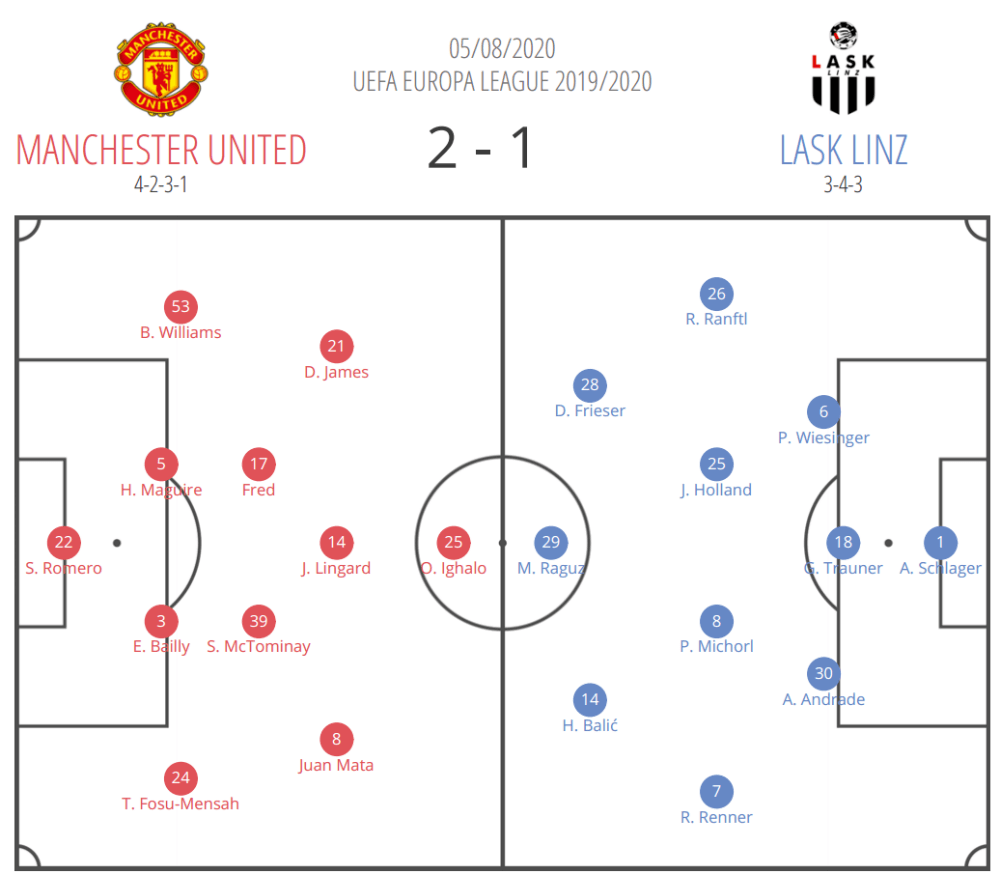 One central question ahead of this game was how much Thalhammer would change the tactics of Linz compared to their time under their prior coach Ismaël. Right from the first whistle of the referee, we saw that the Austrian side used an aggressive and high pressing what was also one of their main characteristics within the last years.

In this game, the right wing-back Ranftl moved into the centre next to Michorl and those two man-marked Manchester United’s deeper midfielders McTominay and Fred. Due to that, Holland positioned deeper and was near Lingard to somehow mirror the central midfield of the Red Devils. The three forwards pressed the back four of Manchester United also man-orientated. 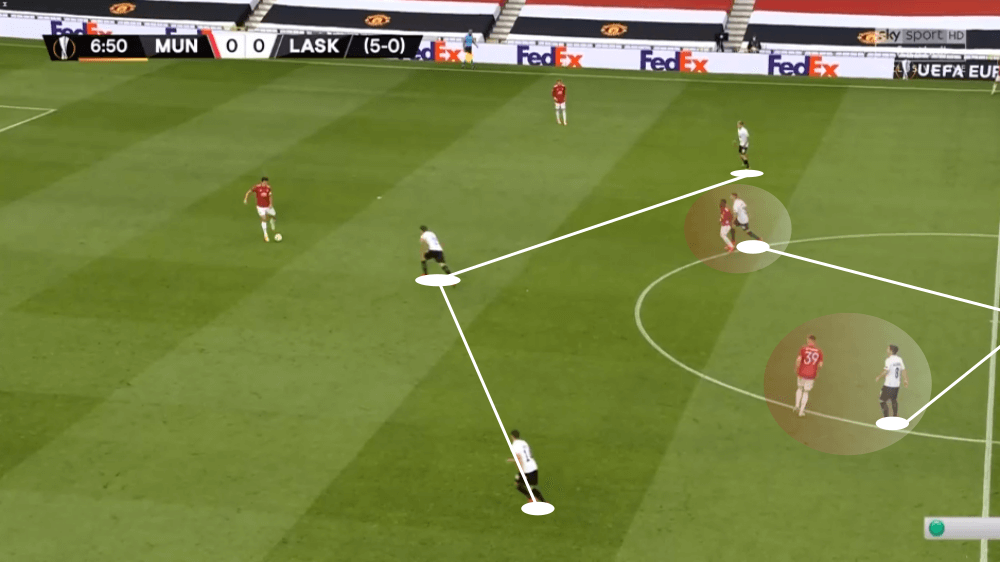 Of course, LASK Linz were not able to put pressure on Solskær’s team for 90 minutes and also sat back deeper in some periods of the game. The two ideas behind that were to firstly take a break and save energy to have the power in other situations to press higher up at the pitch and secondly to let the opposition push higher up the pitch and to have then more space during the counter-attacks.

When they did so, Ranftl, Michorl and Holland had the same positioning as during the press to create a kind of a 4-3-3 as the left wing-back Renner dropped on the same height as the three defenders to create a back four. The interesting aspect about that is that Andrade is in truth a left wing-back and played with Trauner in the central defence while the usual centre-back Wiesinger played as a right-back. 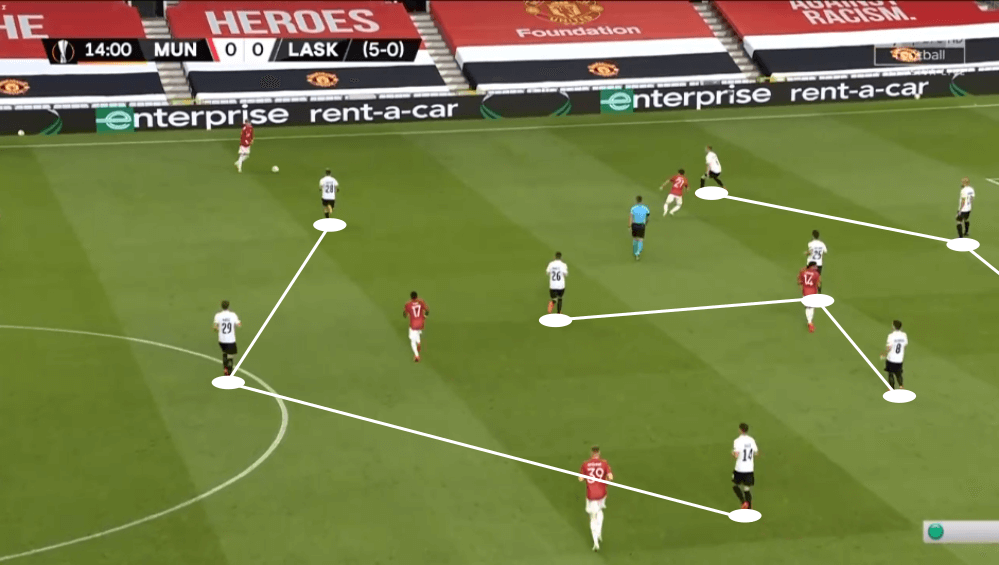 Especially during the opening phase of the game, the high pressing of LASK Linz led to some high recoveries for them which then also brought them into some dangerous situations. Besides, it seemed as the Red Devils would be a bit surprised about the pressing structure of Linz. Anyway, as the time went on, Manchester United found different ways how to overcome the press of Linz and in this part of the tactical analysis, we will look at the different solutions of Manchester United.

One central pattern which they used to open up passing lanes was to dynamically occupy the half-space next to the defensive midfielder Holland. Since James is a classic winger who permanently stays near the touchline, Lingard and Mata had the task to do so. Therefore, Mata either came into the centre to position himself in the half-space or Lingard made a few quick steps to get away from Holland. In the first shot below we can see how the Spaniard occupies the half-space while in the second image we can see how Lingard does the same. 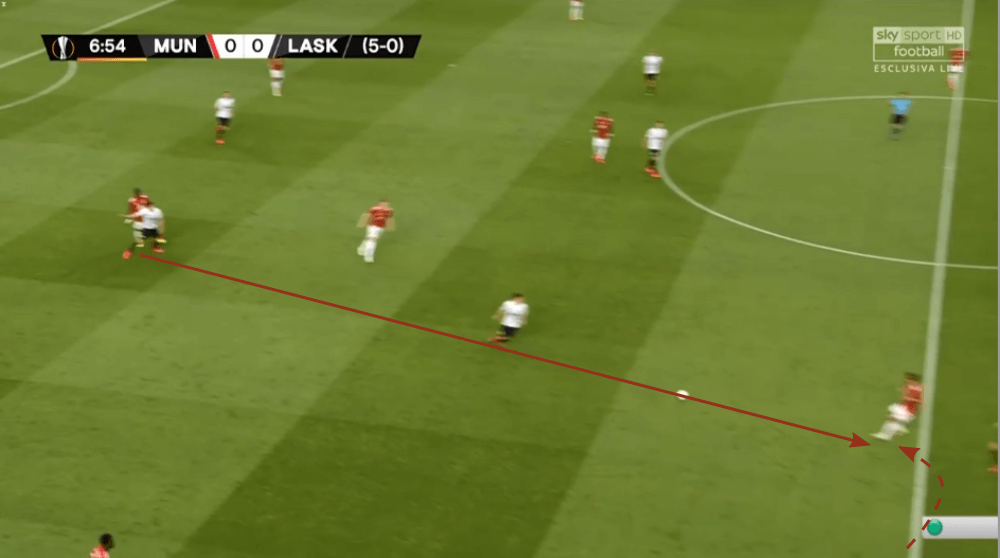 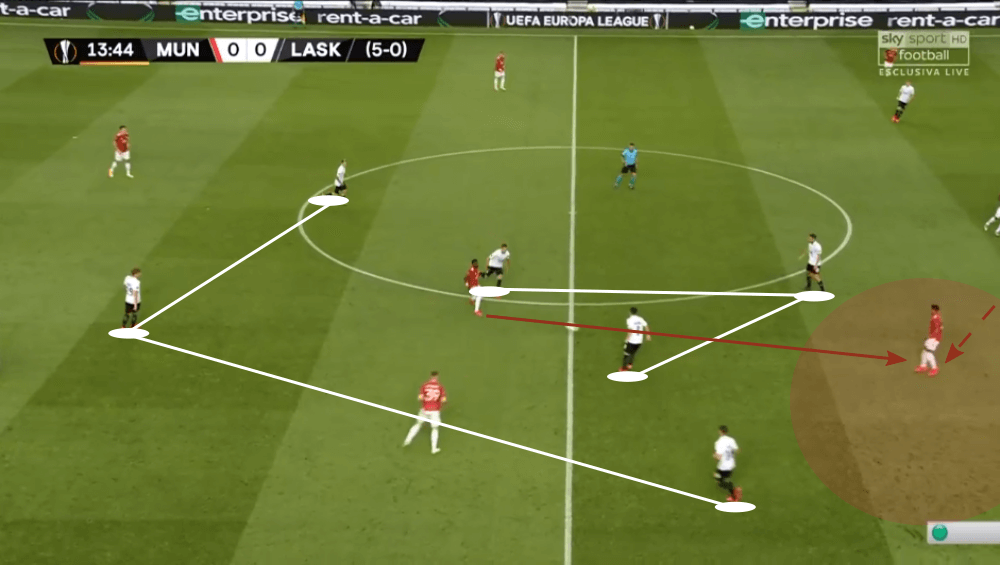 This pattern helped them to create vertical passing lanes to then have little interplays between the offensive players. However, they struggled to then actually create goalscoring chances.

Fred wanted to calm the game down and give his team more control of the game instead of permanently play vertical behind the press of Linz and then create nothing out of it. Due to that, the Brazilian frequently dropped deeper to create distance between himself and his marker Michorl and to have therefore more time and space.

Additionally, Manchester United then also were clever enough to play a few short passes in their own half to lure LASK Linz’s players a bit out or to one side. While Renner on the left side often aggressively pushed forward to press Fosu-Mensah and support the three forwards, Ranftl marked mainly Fred as I already explained earlier in this tactical analysis.

Since the right man of the back three and right-back respectively, Wiesinger was pinned back due to the high positioning of the fast James, Williams had on the left side often a lot of space as long as Manchester United were able to hold the ball for a longer time to create space for him. An example of that can be seen below. 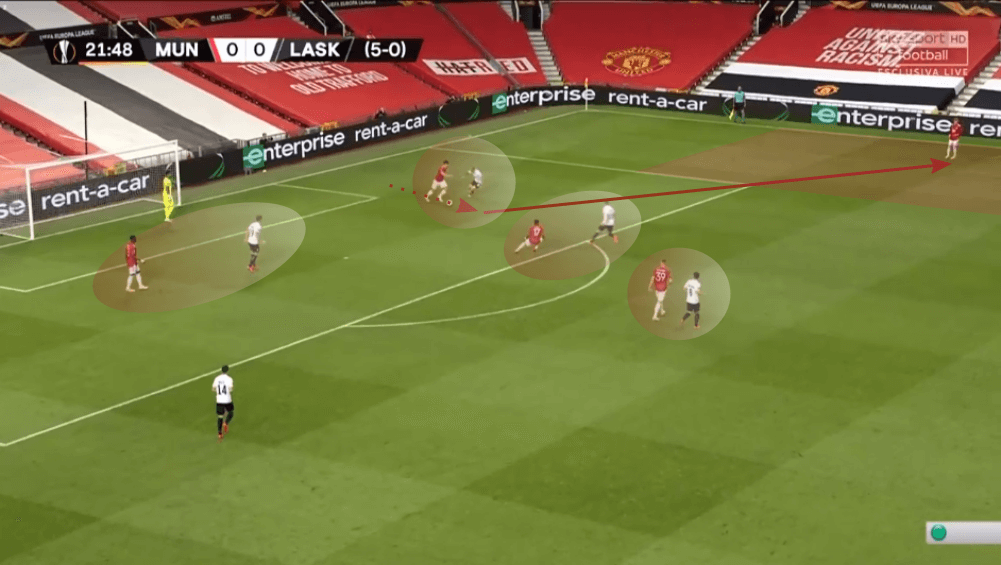 Even though the press of LASK Linz looked at the beginning very promising, United then found several ways to bypass it as we have seen now. To conclude, they used dynamic movements or the dropping of Fred to create passing lanes to keep the ball for a sequence of passes to then find Williams on the left who then would have a lot of space.

However, another aspect of LASK Linz’s press helped them massively: the whole team of Thalhammer worked together during the press what is very important when you put pressure on the opposition that high up the pitch. However, this logically opened up space for the Red Devils elsewhere on the pitch and this was especially on their right side the case due to the high positioning of Renner and the fact that Renner and Balić shifted over to the other side very aggressively. Below, we can see a situation in which Manchester United exploited exactly that. 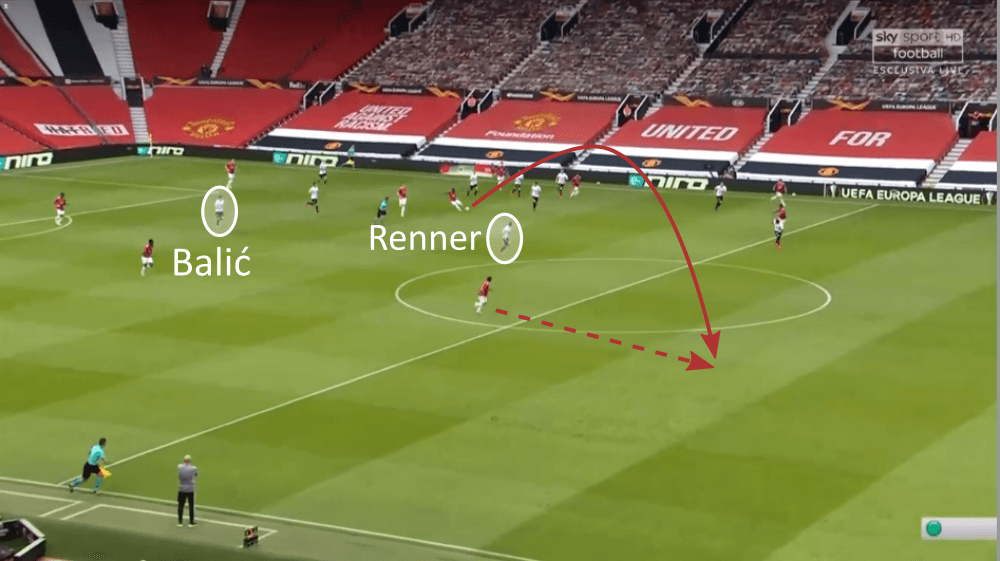 After United were able to bypass the press a few times and then exploited this space on Linz’s left side, Renner and Balić didn’t always shift across that extreme which meant that they would occupy the according space as we can see below. 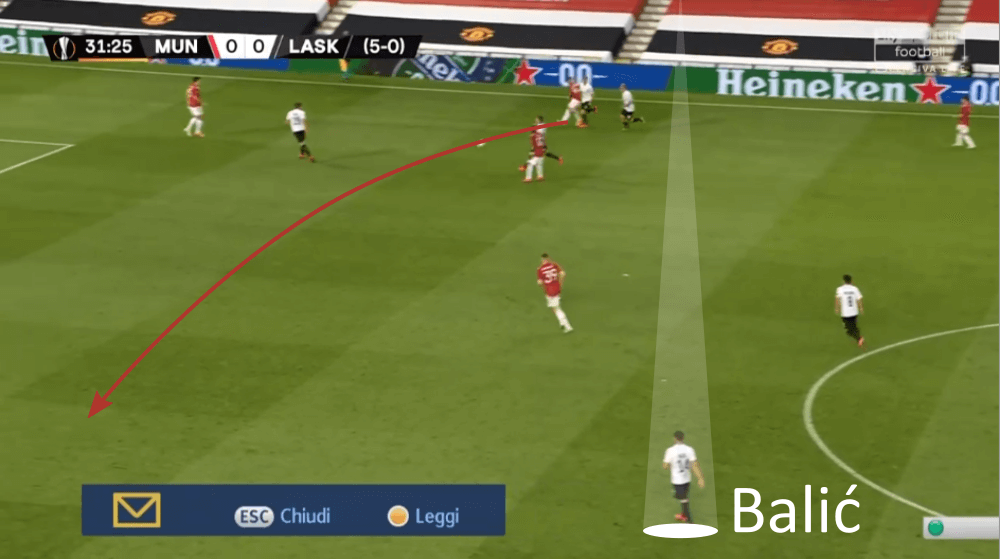 However, even though Manchester United were several times able to enter the final third, they were rarely able to create anything dangerous from that. In fact, the first goal was a result out of an individual error of a Linz player and ahead of the 2-1 Anthony Martial and Mata showed off their individual quality.

In general, LASK Linz got weaker in the second half and Manchester United were able to have more dangerous attacks. One central reason for that is that Linz just started their training 10 days ahead of this game while Manchester United is still in their rhythm after the short break after the EPL finished and due to that we saw a huge difference in terms of energy.

Raguž as the target man

In this final part of the tactical analysis, we will discuss the ways how Linz wanted to get dangerous in this game. Basically, they were very brave and tried to overcome the high pressing of Manchester United with passes and dribbles. The target man was, as usual, the central striker Raguž who was during the build-up and the counter-attacks the player who should receive the ball and then lay it off for his teammates. In the following shot, we can see an example during the build-up as Wiesinger dribbled forward to then find the Austrian striker in the centre what is typical for them. 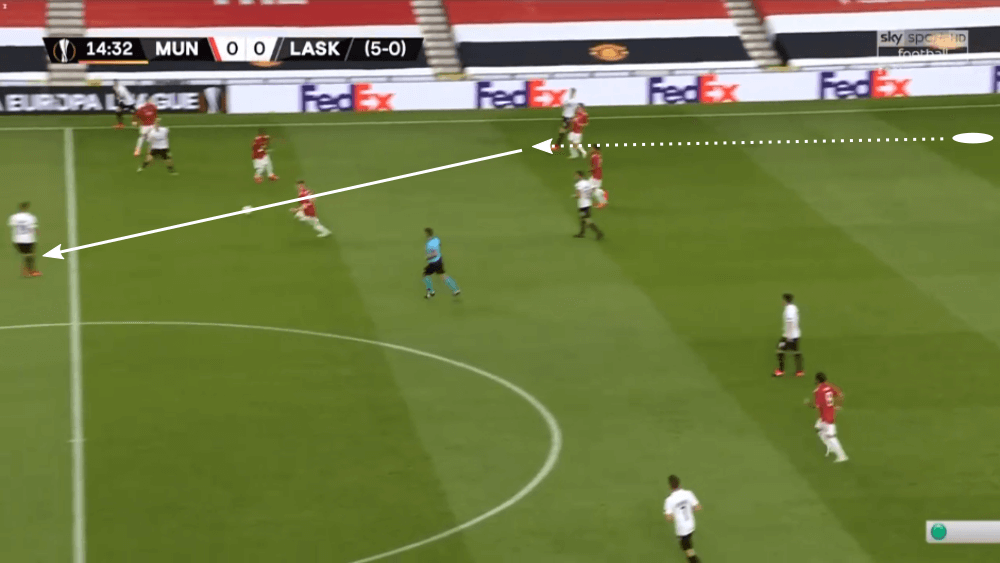 This aspect of their game was already typical under their prior coach and therefore it was clear that Thalhammer wouldn’t want to immediately change it. Furthermore, it was always usual that the two wingers would be positioned very centrally during the period of possession to be close to each other and the central striker. Therefore, they could have little interplays between them more easily and additionally, Raguž has two men close to him to lay off the passes.

In the following image, we have a typical situation as the right-winger Frieser gets on the ball higher up the pitch and then plays a through pass to the other winger Balić who is ruled offside. Still, notice how close the three forwards are to each other. 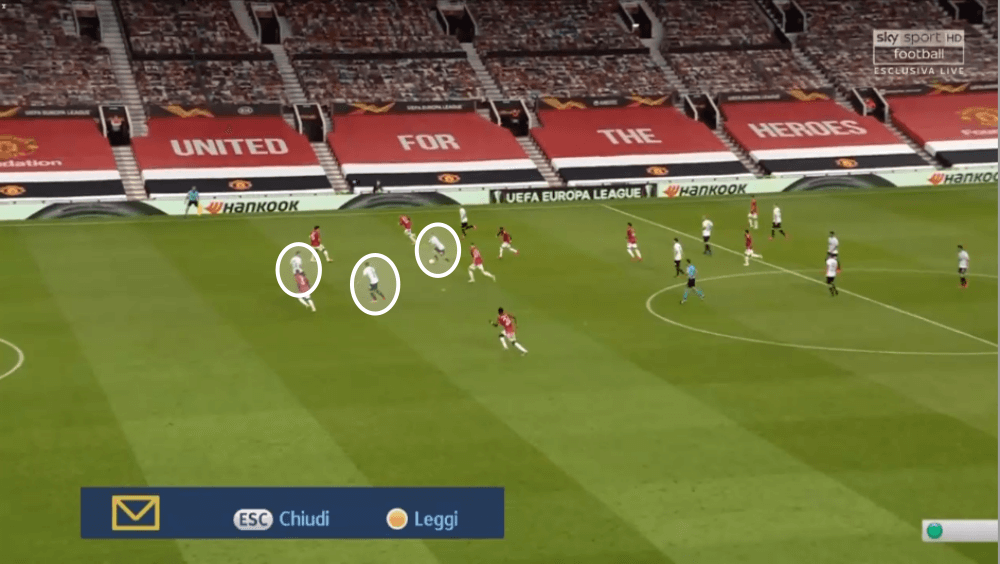 Anyway, during the counter-attacks, they wanted to attack the wide-areas since they knew that Manchester United’s full-backs would be high up the pitch during the attacks. To do so, they wanted to especially exploit the pace of Balić as we can see below. In this situation, McTominay has to make the foul since Fosu-Mensah is too high up the pitch as we can also see in this image. 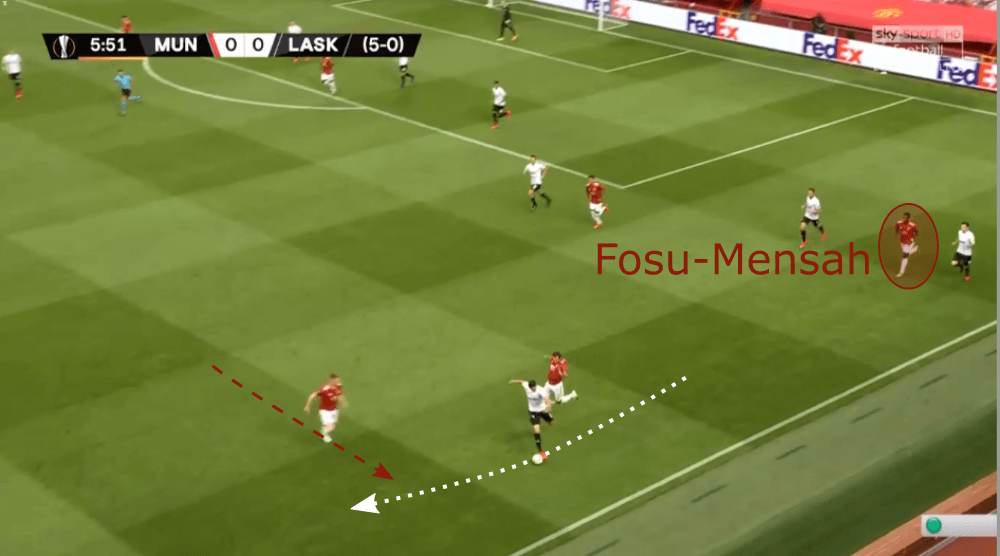 The opening goal of the game was an amazing shot from far out from Wiesinger. As already mentioned earlier in this tactical analysis, the two goals of United were a result out of an individual error and the class of Martial and Mata respectively. LASK Linz showed a decent performance and especially the first half was very interesting from a tactical point of view. In the second one, LASK Linz didn’t have that much power what led to more chances for Manchester United.

Overall, Andrade and Balić showed that they are ready to be regular starters for the team of Thalhammer while none of the Manchester United players really stood out and therefore we can expect that in the next game Solskær will once again go with his top starting XI with Paul Pogba, Bruno Fernandes & Co.