Jonathan David was one of the young sensations of last season. The young Canadian player played with KAA Gent in the Jupiler Pro League in Belgium, which is known to produce some great young talent. Last season he scored 23 goals and made 10 assists in 40 games. He ended the season as the joint-top goalscorer in Belgium’s top-flight, which is an indication of how impressive these numbers are, given that his career is just starting.

Now he has joined Lille, who have got a reputation for developing young stars. Since Lille lost their main striker, Victor Osimhen, in the summer, as the Nigerian joined Napoli to play in Serie A, they targeted the young striker to replace him. They have also signed 35-year-old Turkish international Burak Yilmaz but he is a more of a veteran, experienced player. It is David who fits more into the club’s philosophy of playing with and developing young stars. In this scout report, we will analyse how David will get involved in Lille’s team.

David is a talented attacking player with plenty of potential. Christophe Galtier will need to know how to incorporate his talent into the team to get the best out of him. Moreover, he can play both as an attacking midfielder or striker, showing his versatility. In this tactical analysis, we will explore David’s attributes and why they are beneficial to Lille.

Moving to the left

KAA Gent usually played in a 4-3-1-2, where there are no wingers. This means that David, being normally the attacking midfielder, had the freedom to drift onto whatever wing he wants. As he moved to the wings, he made himself quite difficult to mark and created an element of surprise for the opposition defence, as seen in the image below where he has moved to the left for a counter-attack.

This is because since there is no one in that position and the opponent full-backs are not expecting anyone to go in there. With him running into these spaces from the middle, it is unexpected. Specifically, he prefers to move more onto the left-wing as from there he can cut in and shoot.

Moreover, this creates width for the team which stretches out the opposition defence. With the opponents wider apart, it creates more spaces through the middle, which other teammates can take advantage of.

Additionally, going to the wing for a counter-attack is a great idea for exploiting space, like David does, because often, the opponent full-backs go up to attack. This leaves a big amount of space behind the full-backs, making it perfect for counter-attacks and David has understood this. 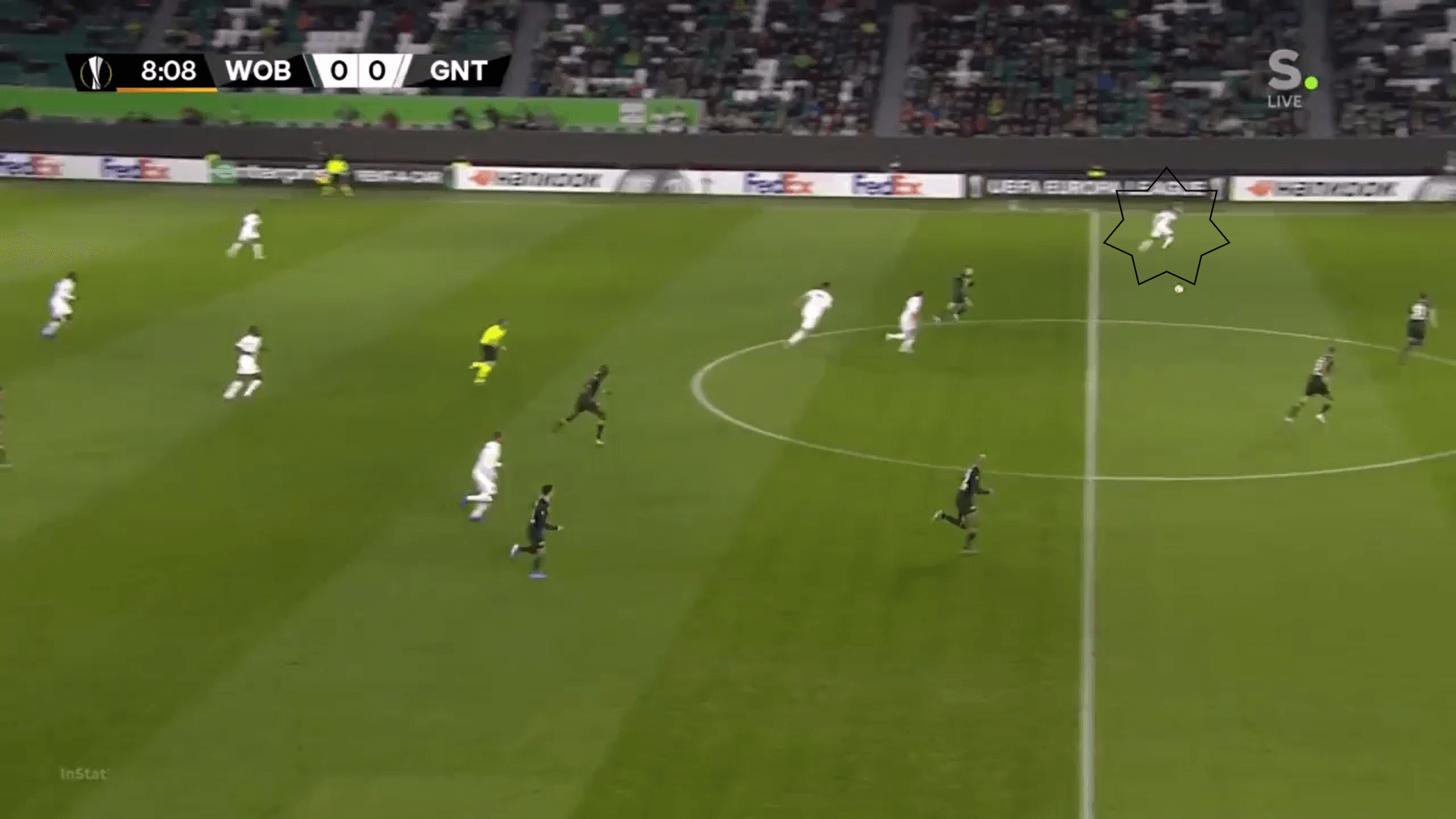 Connected to this is the Canadian’s great technical ability. With this, he can create danger from the wings as he can dribble past opponents to generate opportunities.

Through his dribbling, he can create chances for himself and teammates as well as getting out of complicated situations. In fact, last season he had a dribbling success rate of 60%.

In the images below, we see David in a 1 vs 1 situation in the wing. He is able to swiftly get past and cross a dangerous ball into the box. 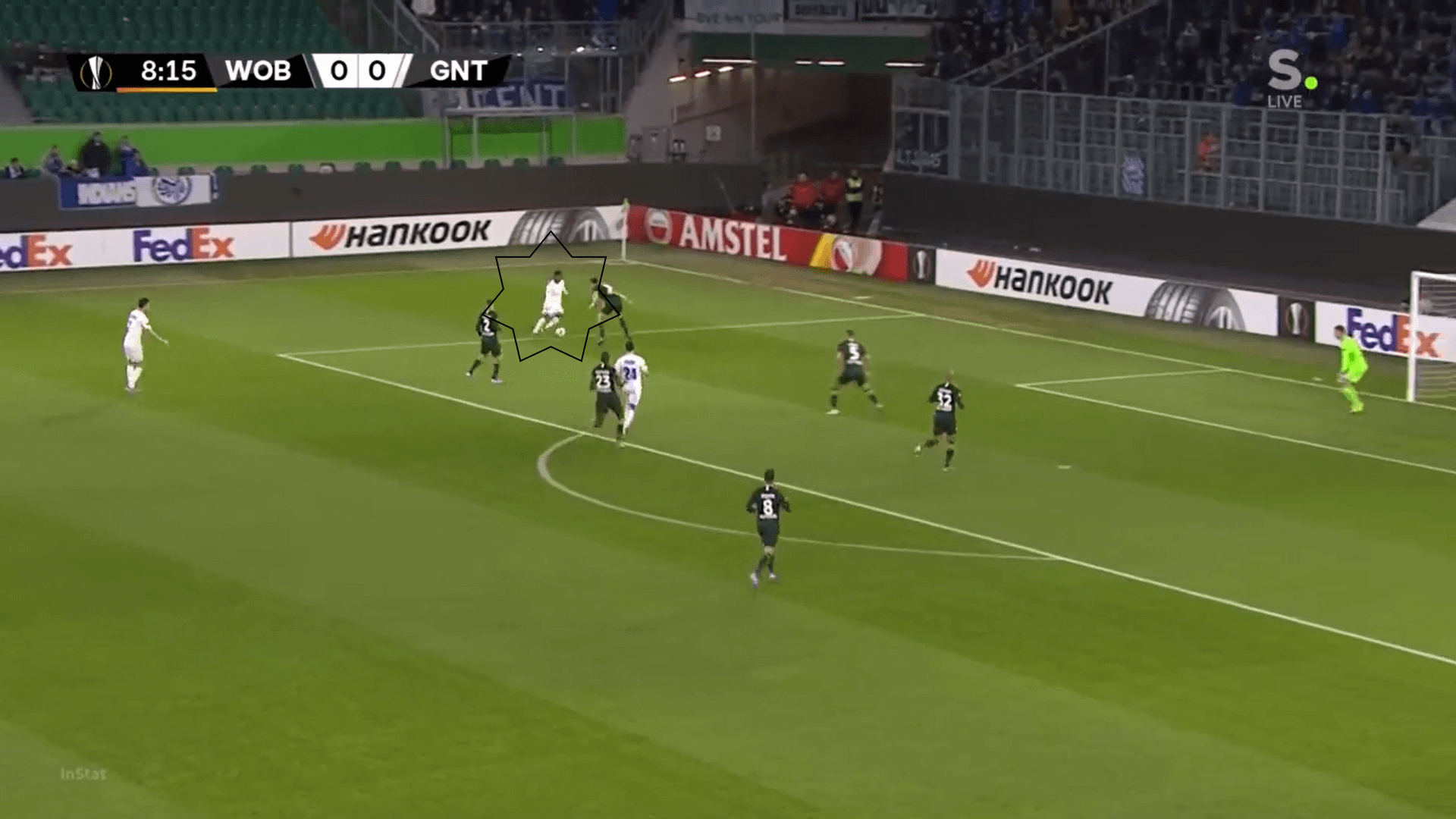 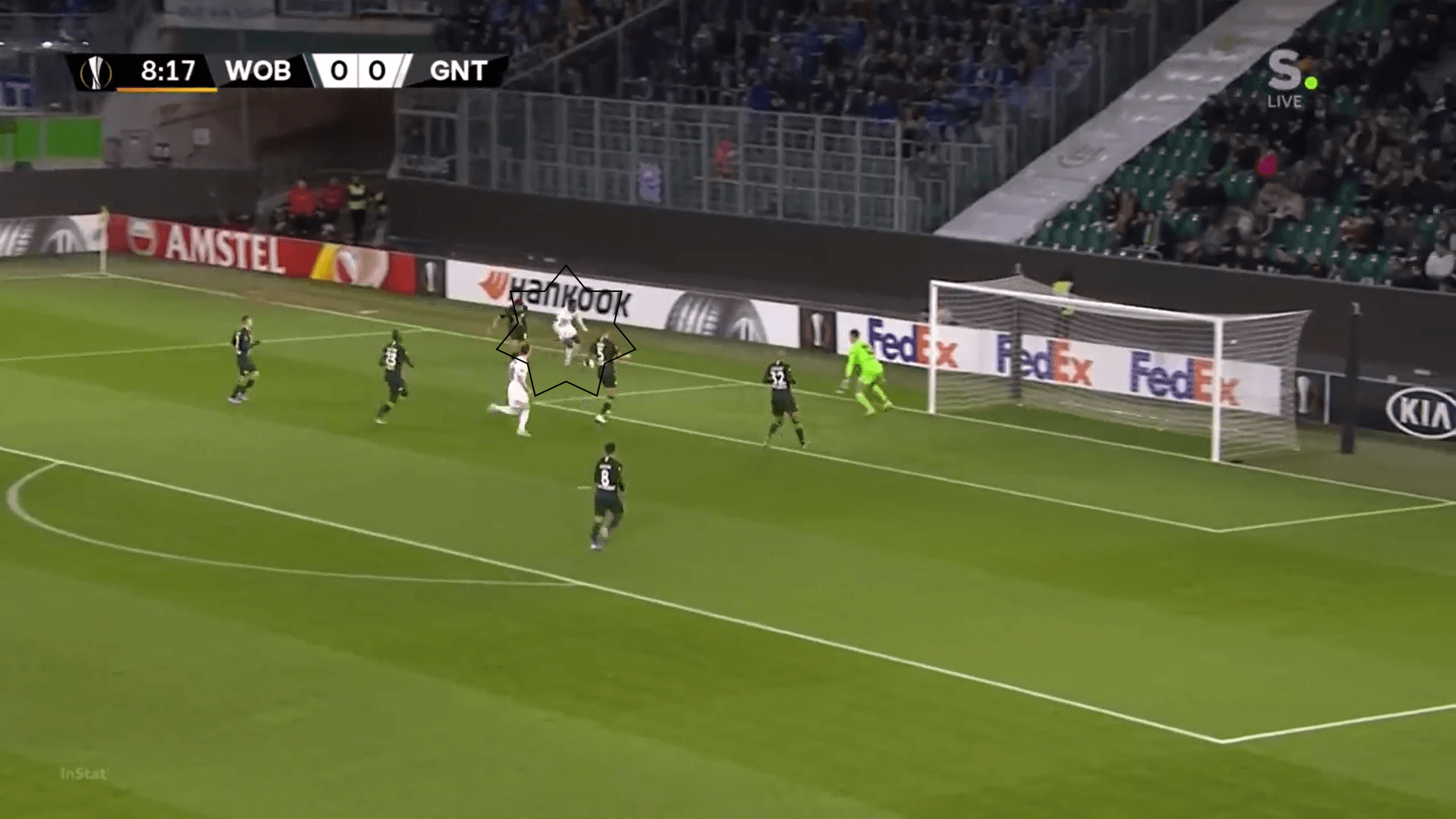 Being a fast player, David is an asset when it comes to counter-attacks. He is usually in advanced positions when Gent defend deep which means that he is a good passing option to start the counter-attack.

In the images below, we can see his preference for quick counter-attacks. In the first image, we see how he has dropped to help start the counter-attack. Once he receives, he sets the ball to an oncoming teammate and sprints forward.

In a matter of seconds due to his speed, he is making a dangerous run in behind the defence that is placed high up the field. This is seen in the second image. 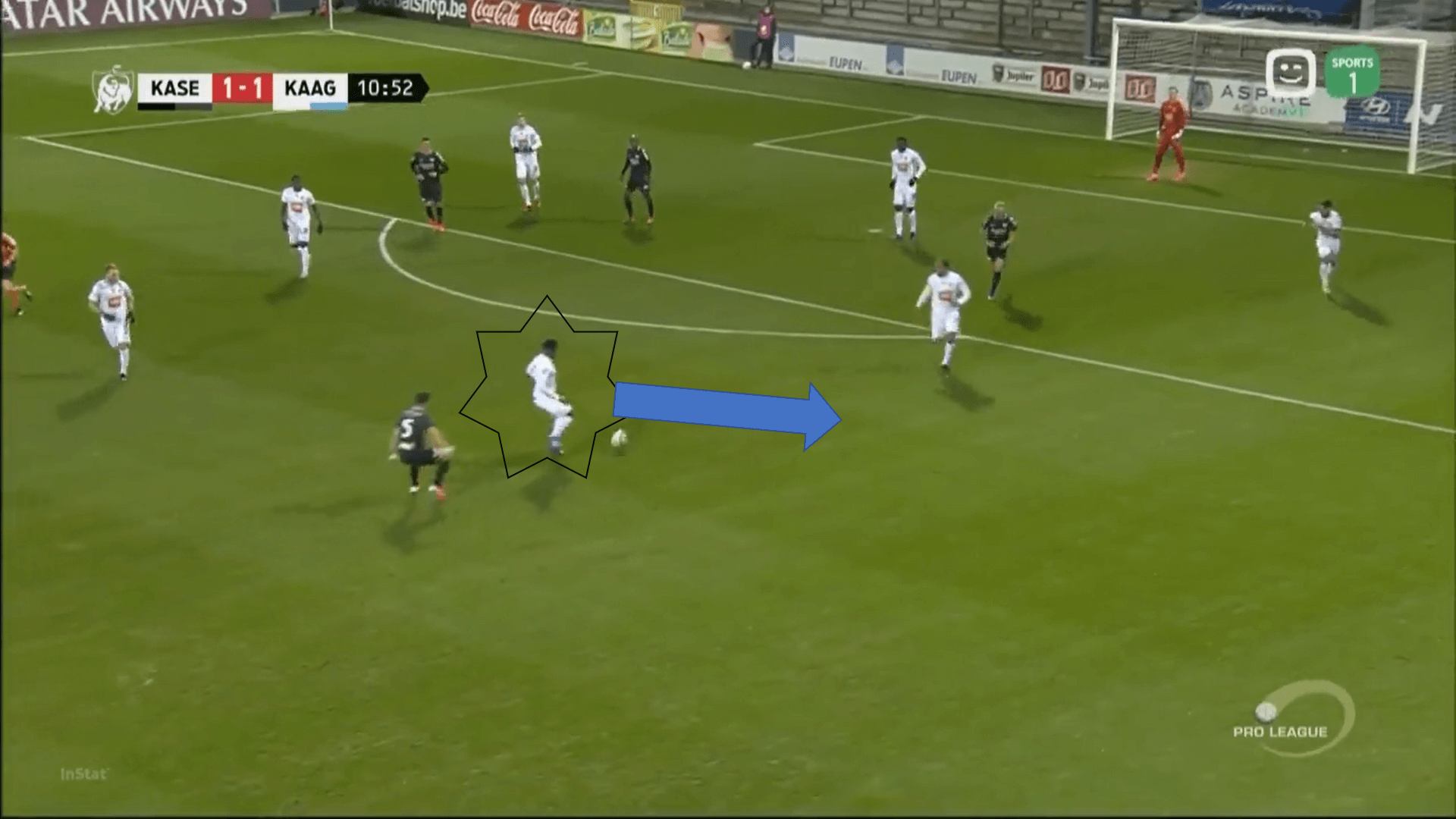 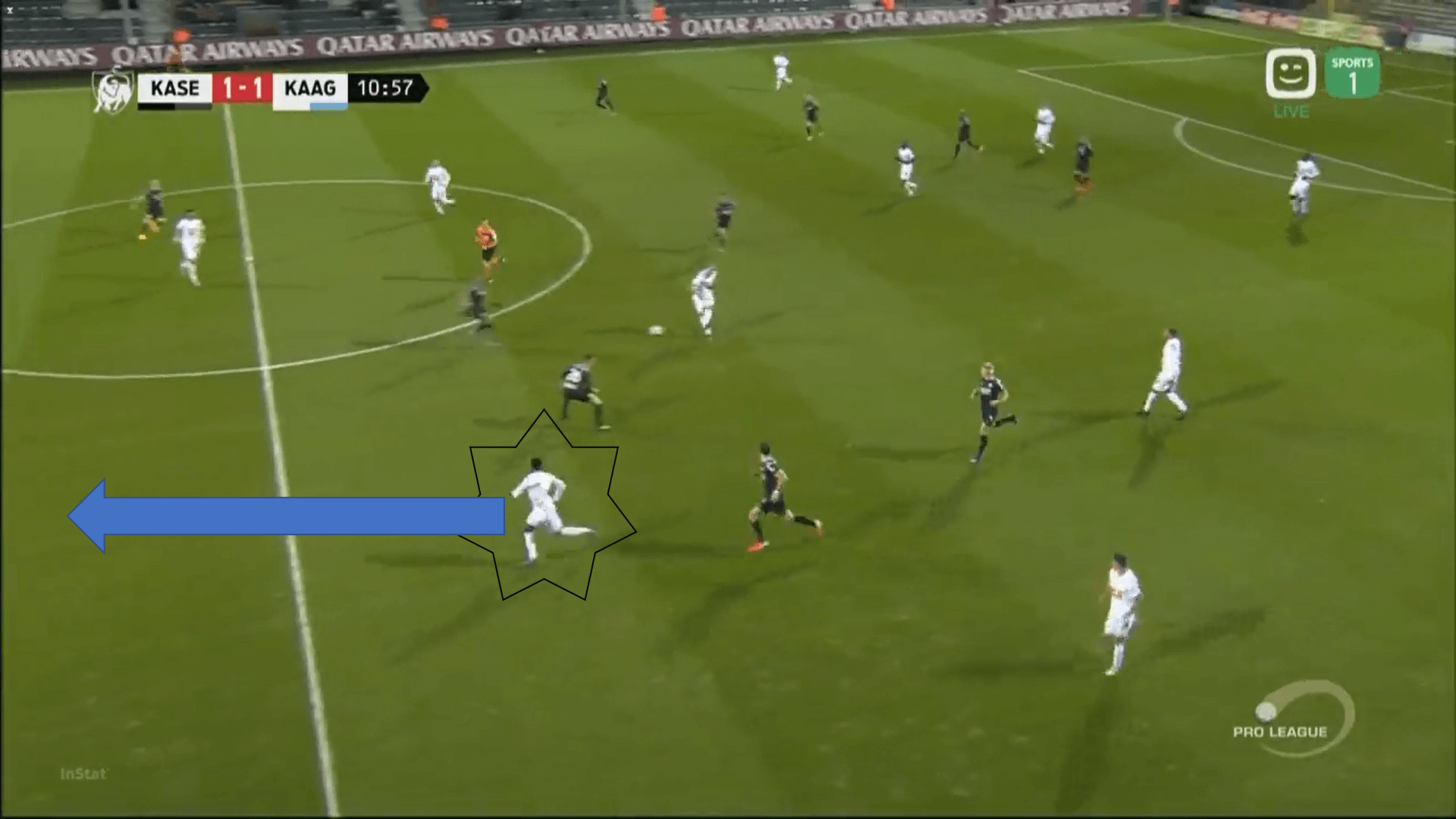 Furthermore, he also drives the ball well in the counter-attack. With his technical ability, he is able to drive with strength up the field at a high pace while being aware of his options. This is a valuable skill to have and one that was very useful for Gent.

This means that when starting counter-attacks, his teammates normally look for him because they know that he is the best suited to carry out the attack.

In the images we see from where he starts driving with the ball and where he ends up, all done at a fast pace and with good control of the ball. 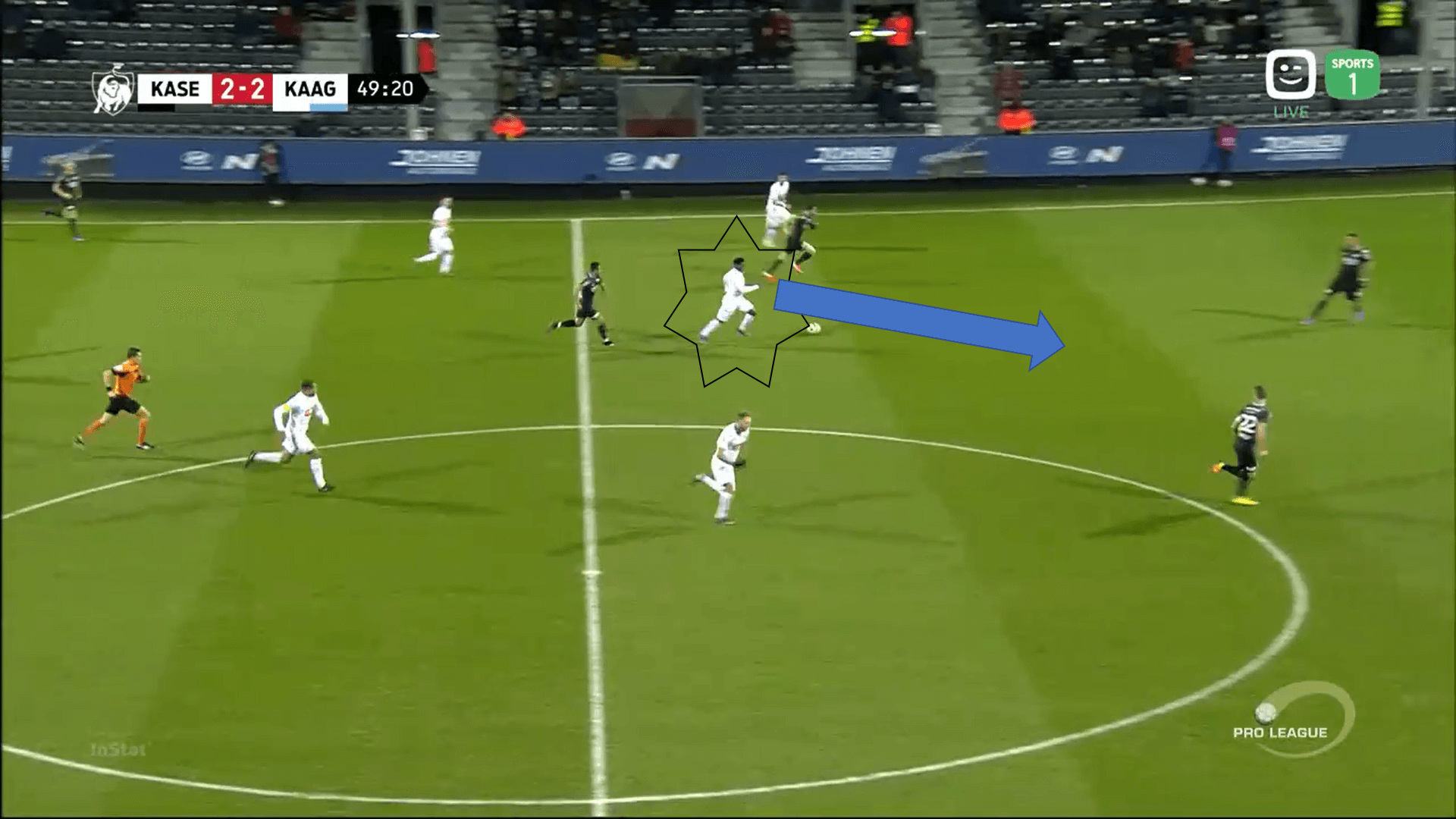 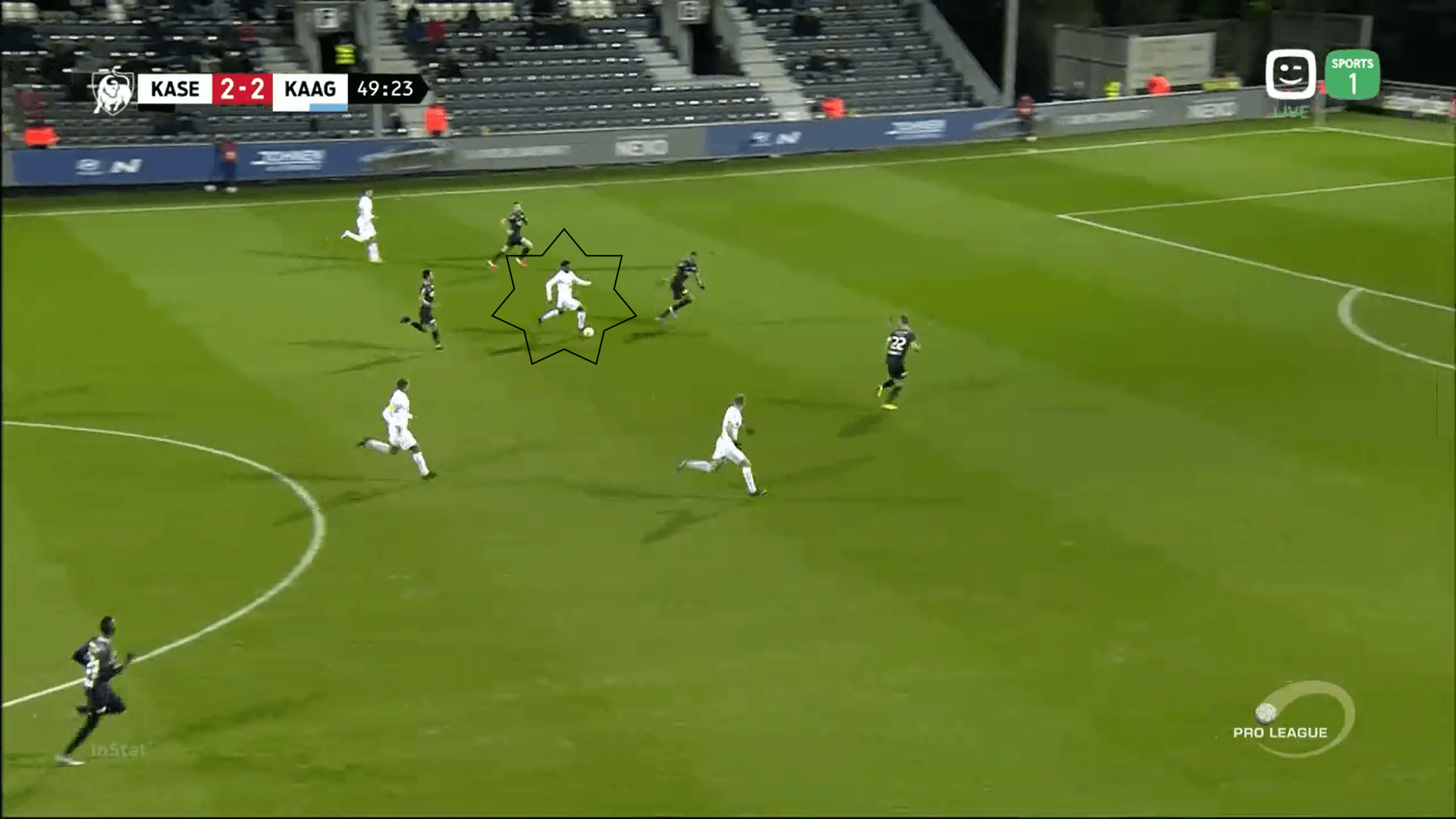 David is a hard-working player, who usually drops further than his position to help defend. He does this because sometimes he can surprise players by arriving from behind. Additionally, it adds one more man to the defence in order to generate superiorities in parts of the field.

Also, since Gent uses a formation with no wingers, he sometimes comes to help the full-backs so that a 2 vs 1 does not happen on the wing. In the image below we see how far back he has come down the wing to help. 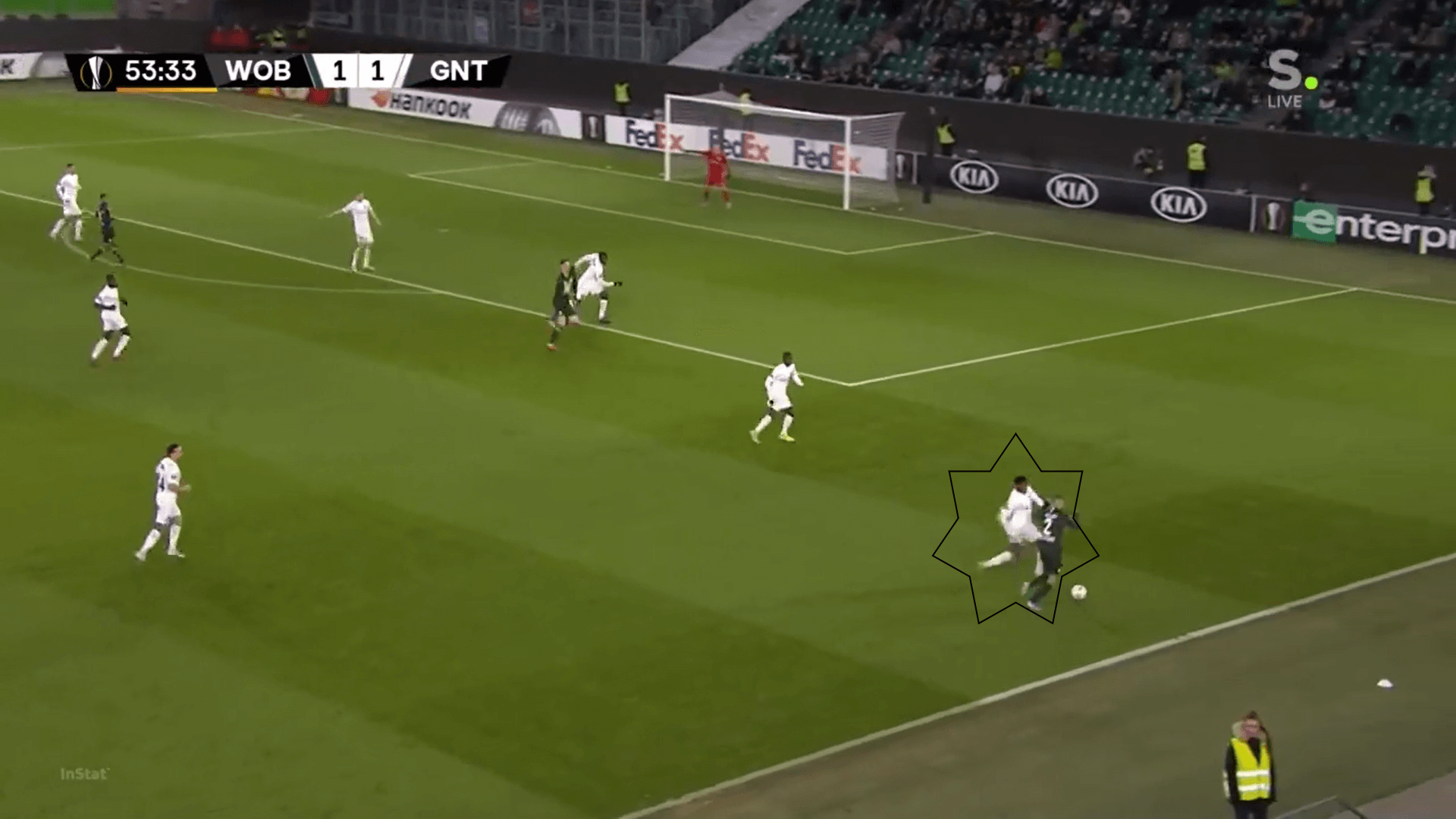 This willingness to defend fits into Lille’s tactics. This is because they have the second-highest pressing intensity, behind PSG. Lille had a PPDA of 260.65 for the 2019/20 season. This is their passes per defensive action so having a low number in this means you allow the opponent to make few passes before you employ a defensive action.

When David is a striker, he looks to drop down to become an easier passing option. With this, he gets rid of his marker who is the centre-back and who rarely follows David to not lose his position. Nonetheless, if he does follow David, then a big space is created in the defence for Gent to take advantage of.

In the image below, we see how David is running to support his teammate and become a better passing option. 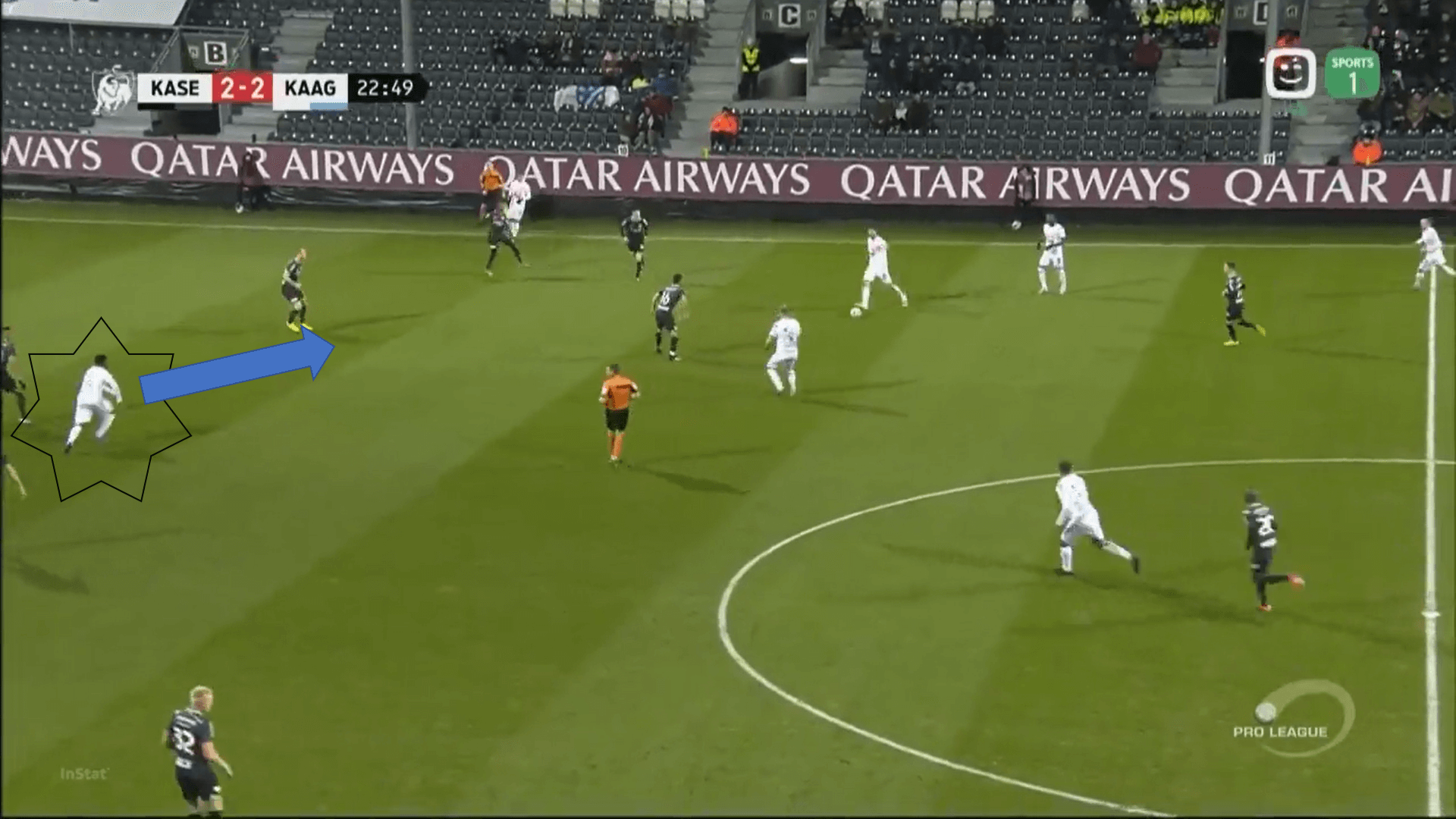 David is a threat when he is facing goal. However, he also plays well with his back facing the goal. This is an important ability for a striker to then connect better with his teammates and have a bigger influence in the plays.

With this skill, he can make one-twos with teammates and make passes to oncoming players who are facing goal. The image serves as an example where David makes a one-two with his teammate who then goes through the midfield line and becomes a threat towards goal. 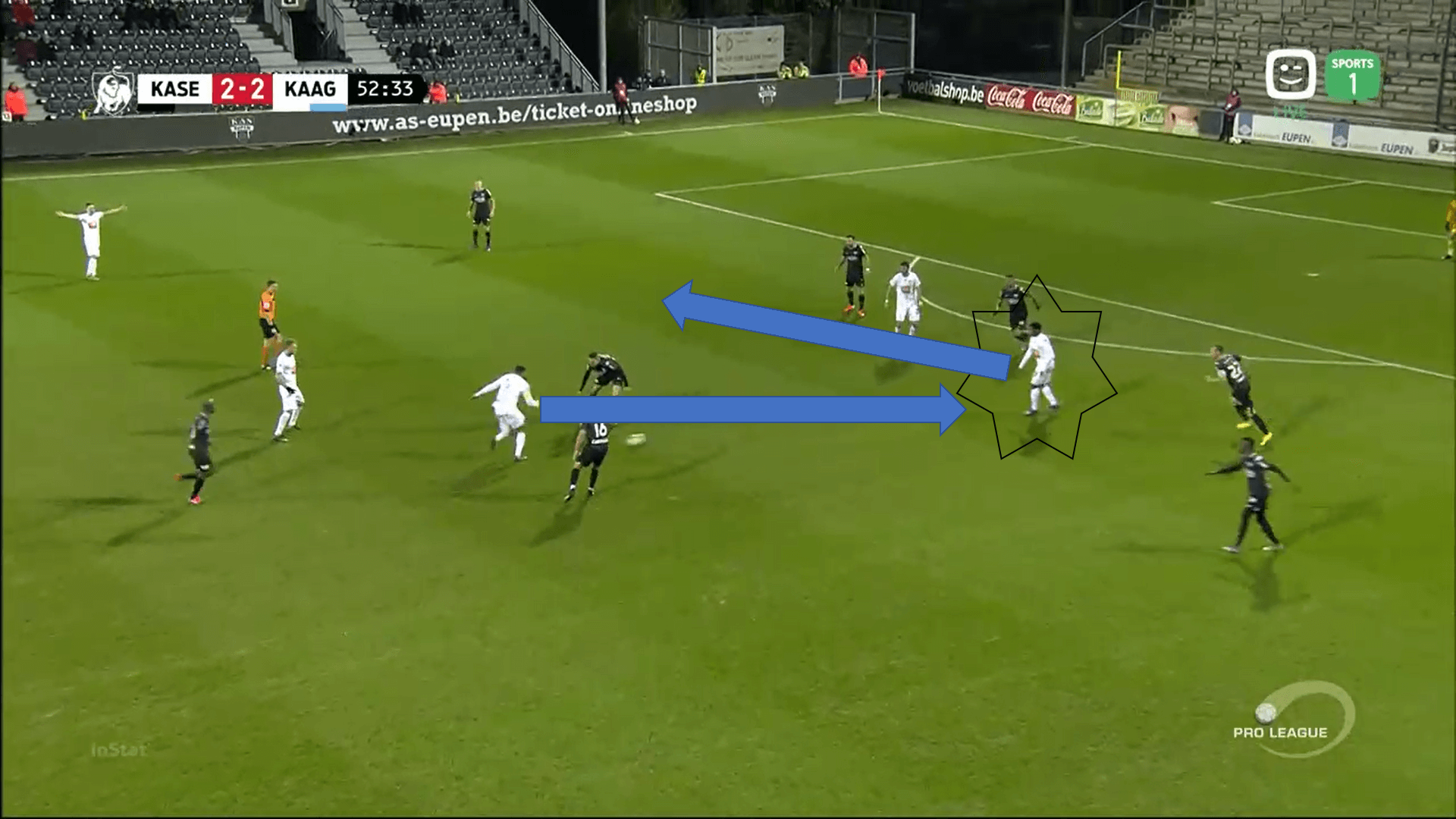 Being a striker at Lille means that you are more in contact with the ball than other strikers. It is due to Lille making the second-highest passes to the final third per game (57.22) and the third-highest deep completions per game (7.82).

This is great for David who is a striker that can produce danger with the ball at his feet. Sometimes the strikers in a team are more distanced from the rest and have little influence on the game. However, this is not the case in Lille who tries to get the ball forwards to their attacking players often.

At just 20 years old, David is an intelligent player who understands where the space is to exploit it. This is a crucial aspect to possess because exploiting the empty spaces left by opponents is one of the best ways to create danger.

This is shown by his movement towards the wings that we mentioned before but also because of movements he makes in the middle. Since attacking through the middle is complicated because it is where many opponent players are, David has to find spaces in this compact area.

An example is in the image below. The Gent striker does a great job in attracting the left centre-back with him as he makes a move to the wing. This leaves enormous space for David, who is coming through the middle, to run into. 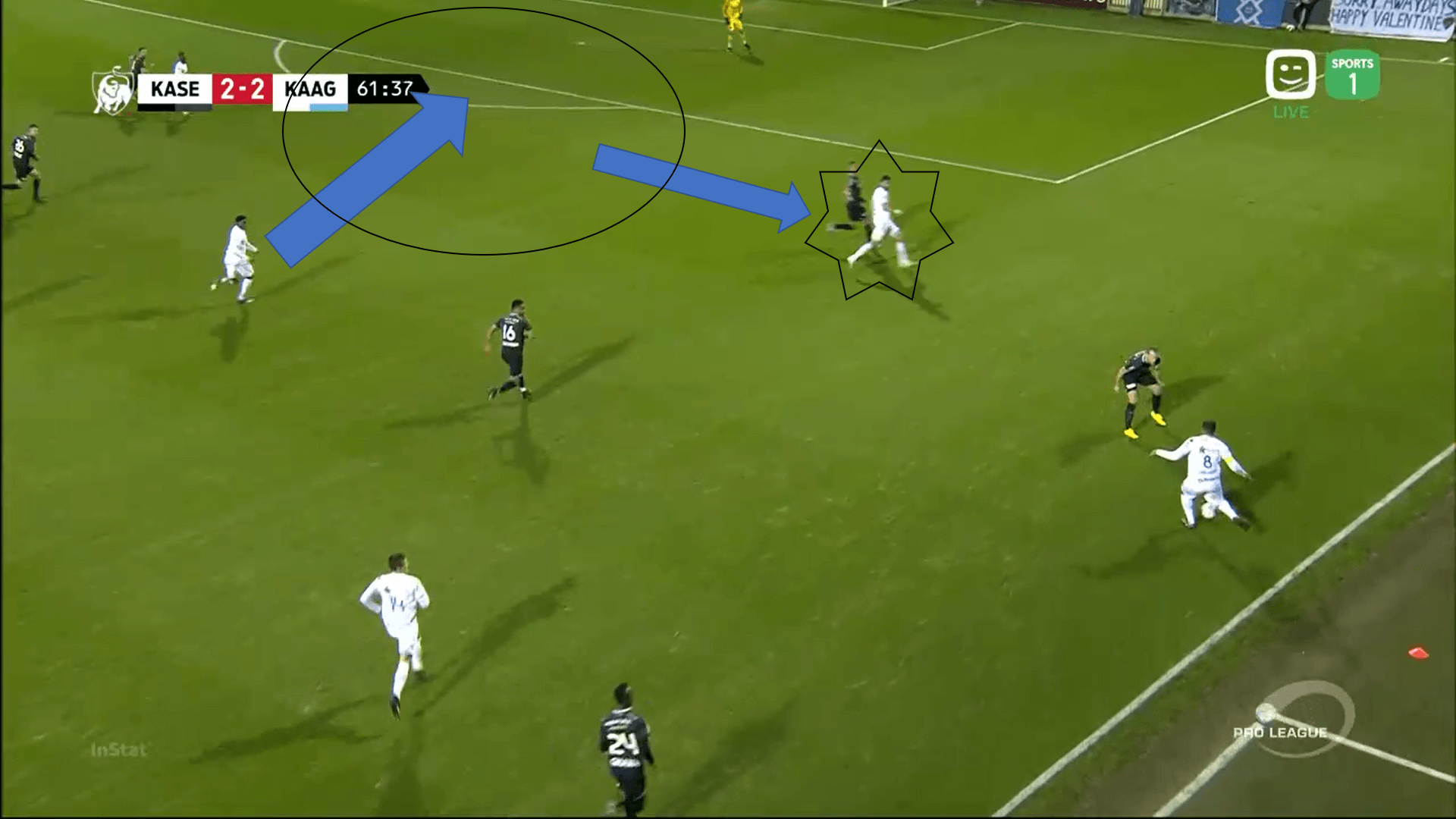 Overall, David is an exciting young player who has excelled in the Jupiler Pro League but has to now prove himself in a tougher league, such as Ligue 1. With his versatility and technical ability among other things, he is bound to be a good fit for Lille. We have seen that he is best with the ball at his feet and Lille’s system encourages this, which is great to improve his adaptation to the club. We just have to wait now and see if he can drive Lille to play the UEFA Champions League next year.