Last season was an eventful one for recent Bayern Munich signing Alexander Nübel. The 2019/20 season was full of excellence, injury, and controversy for the Germany U21 international. In our recent data analysis on the best U23 goalkeepers in Europe’s top five leagues, Nübel showed up as one of the standout performers, earning his free transfer to the German champions. He started the season excellently, putting in several outstanding performances for Schalke. This young goalkeeper also started the season as captain, however, he was later stripped of this after agreeing to join Bayern.

This tactical analysis will look at Nübel’s qualities and how he can benefit Bayen. Since signing his contract, Manuel Neuer has also signed a contract extension, meaning Nübel will be relegated to the second-choice goalkeeper. We will look at what Bayern’s tactics will be, and how the young goalkeeper can fit into these.

Nübel vs Schubert – has the former earned his move to Bayern Munich?

It wouldn’t be the first time Nübel has been in a fight for the number one spot, however. Last season he was in a battle with Markus Schubert to regain his place after injury, a battle that Nübel subsequently won.

The two performed fairly equal, on average. However, the more inexperienced Schubert made a lot more errors which lead to goals. Which led to him being replaced by Nübel. Below is a radar graph comparing both goalkeepers stats.

As we can see, both goalkeepers are extremely even in terms of statistics. Evident mostly in their save percentage which is separated by just 0.06%. During Schubert’s stint in goals, however, he did see more action than Nübel, facing 6.35 shots per 90. Considerably more than his compatriot, meaning he’s conceded more goals per 90 too. Schubert is more active off his line than Nübel with a higher percentage of crosses stopped.

Although their goalkeeping stats are very similar, Nübel stands out in his passing. Proving himself as one of the best young passers in the top five leagues.

Although the number of passes they make per 90 is only separated by 0.49 and their pass accuracy is only 1.01% different, the types of passes they make are very different. Nübel has much more of a tendency to build attacks from the back with shorter and simpler passes. He has a less percentage of pass launch and long pass tendency.

Nübel, standing at 6’4”, is an incredible shot-stopper. His height joined with his fast reflexes means that he can make all types of saves anywhere on goal. The 23-year-old is one of the best young shot-stoppers in Europe’s top five leagues. The below graph shows this. We can see that although his PS xG +/- per 90 value is -0.3, he is still above the average. However, the average difficulty of the shots he faces is only just below the average. He faces harder shots than AC Milan‘s Gianluigi Donnarumma and Manchester United‘s Dean Henderson.

Being fairly tall, it means that he can save harder shots when he doesn’t have as much time to react. This along with his consistent good positioning means that he often saves shots that he isn’t expected to. In the above example, against Union Berlin, there is a free-kick from about 40 yards out from goal. As soon as Nübel realises that the delivery is too good to come out and claim he retreats to his goal line to give him maximum reaction time. Schalke’s bad defending means that the opposition are able to get a free header on goal. But because Nübel is on his line, he can dive to save it rather than making a point-blank save. He dives to his right and gets a strong hand to the shot, palming it out to safety.

His positioning doesn’t only help him when facing shots, it is also invaluable during one-on-one situations.

Against Leverkusen, we can see how good his one-on-one positioning is. He does extremely well in the first image to read what the attacker is going to do. Which is fake the first shot to trick the defender. Nübel does well to stay on his feet which then allows him to throw himself at the second shot attempt. If he’d thrown himself at the fake shot in the first instance then the attacker would have been left with an open goal. By engaging and coming off his line he leaves the attacker with no other choice other than to strike the ball straight at the keeper.

Nübel has a strong save percentage of 67.21% because of his positioning and reach. He also has a post-shot xG +/- value of 0 per 90. Meaning he has performed as he was expected to.

But positioning can’t always help Nübel. A goalkeeper needs to be able to react to shots and make saves from point-blank positions by spreading themselves. The German keeper is very good at adapting to situations where he needs to put his body on the line to prevent goals.

Against RB Leipzig, Nübel pulls off a ridiculous double save. With the initial shot, the keeper stays close to his line. This lets his defender close down the attacker and worsen his shot. It also gives the keeper maximum time to react to the shot. Because the shot is so powerful and lacks direction, the ball rebounds off Nübel into the path of another attacker.

The German does exceptionally well to get back on his feet, travel across his goal line, and spread himself to create a bigger target. He spreads his leg out in front of him and his arms either side to cover as much of the goal as possible. The shot hits his leg and is cleared to safety.

But how does Bayern Munich’s new man compare to their current keeper?

As we saw in our data analysis on the best U23 goalkeepers within the top five leagues, Nübel ranks amongst the best young passers. 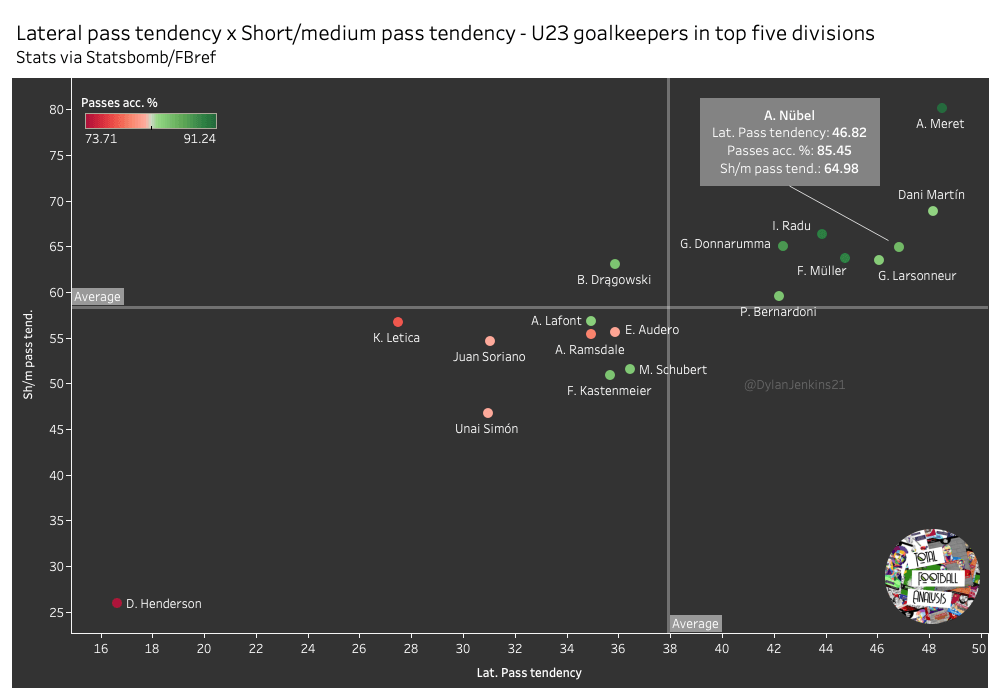 If we compare these stats to Neuer’s we can see how well suited Nübel is to their build-up tactics.

We can see that their passing statistics are not too dissimilar. Nübel would certainly be able to develop his passing skills further, but he has the foundations. They have a similar tendency to pass laterally. But Nübel has a much higher tendency to pass long and launch his passes. This could be put down to Schalke’s tactics, however. Schalke only take the short option if it is available, whereas Bayern will look to create the short pass opportunity rather than hit a long hopeful ball.

Nübel is very good at spotting passes further up the field to teammates in space, this helps his team advance up the pitch, evident in the example below.

Here, Nübel notices that the opposition left-winger has pushed further infield than he should have. This leaves Schalke’s right-back in a lot of space. Nübel not only has the vision but has the passing technique to chip the ball 40 yards to his teammate. This gives the right-back space to run into as his marker is now behind him.

Nübel certainly has the fundamental passing tactics to fit in at Bayern. However, with the guidance of Neuer and their training staff, he will be able to push on as one of the best young passing goalkeepers in world football.

Weaknesses that he will have to overcome

As good of a shot-stopper as Nübel is, there are areas of his game that needs to be improved if he is to succeed at one of the biggest clubs in the world. The 23-year-old struggled with his sweeping abilities, inside and outside of the box. 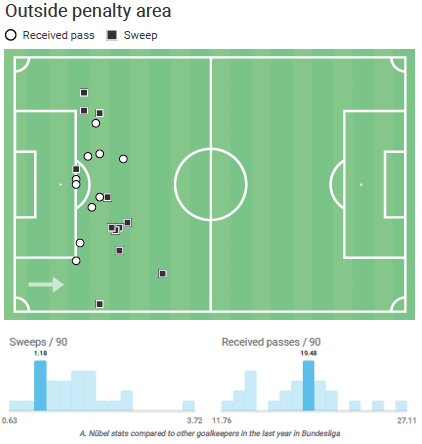 Having said that, Nübel is much more comfortable dealing with crosses along the floor. He doesn’t appear to be confident coming to claim crosses or set-pieces. He only makes 0.77 actions per cross, which is one of the lowest in the league. Nübel is very good at reading low crosses and intervening, due to his good positioning. 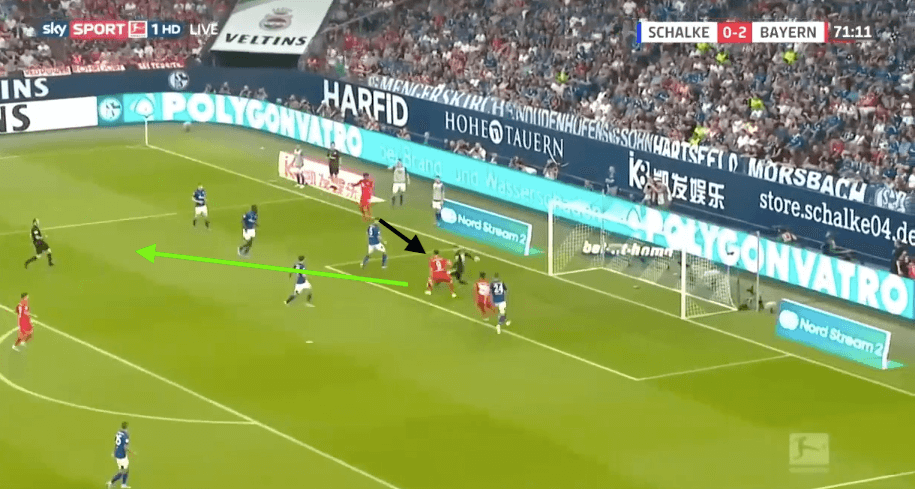 He’s able to jump off his line and make a good intervention that ultimately saves a goal. Intercepting the ball in front of Robert Lewandowski.

His weakness with crosses is his lack of braveness and confidence that he can claim a high ball. In the example above, we can see that he is very lucky that he drops the ball into space, and not to an opposition player that could take advantage. Ironically, however, he makes his mistake into a positive situation. When he drops the ball, he follows the ball out and starts a counter-attack, using his passing abilities.

This scout report has outlined why Nübel could be the future Bayern Munich number one. His talented abilities along with the guidance he will receive from Bayern and Neuer himself will potentially see him moulded into a future German international goalkeeper. Nübel’s strong shot-stopping abilities stem from his good reflexes and positioning. Whilst his confident passing and vision allow him to pick out teammates all over the pitch. His only weakness is his confidence to come off his goal line and take pressure off his defenders. However, with Neuer being renown for his sweeping abilities, Nübel’s will only improve in this area.